A Leisurely Stroll From Salida to Breckenridge

Another hiker and I arranged for rides back up to Monarch Pass early in the morning to get the day started. A local trail angel, Tom, picked us up from the hostel and we headed back up the hill to the pass. I definitely felt a little slow and unmotivated in the morning and it took me awhile to get into the groove and rhythm.

Clouds ended up gathering and I wasn’t all excited about the upcoming climb. I ended up setting up camp below the climb that took the trail over 12,000 feet. I really had zero interest in camping up that high and also wasn’t interested in finishing the day climbing. So I saved it for the morning.

I slept well that night. I woke up and quickly packed up and headed toward the climb. It was nice to pack up quickly, and while it was freezing cold out, it was actually quite pleasant out. The evening before I consciously set up my tent facing toward the east so I could bask in that early morning sunlight

The climb quickly passed as I climbed numerous switchbacks up to 12,000 feet and above. The trail followed a beautiful section above the treeline and I basked in the open views. 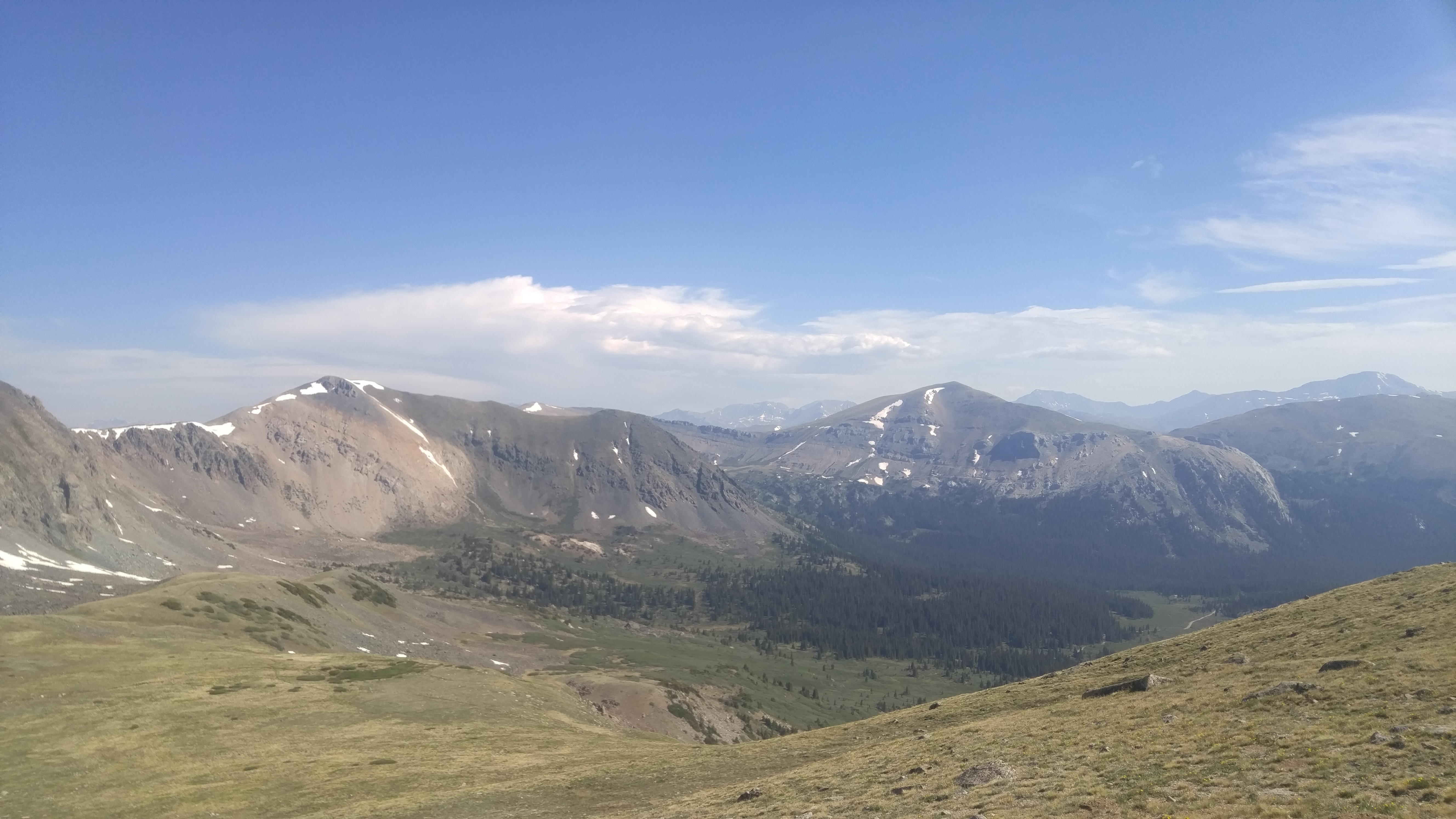 Later in the day a day hiker struck up a conversation with me. I proceeded to ask what he was up to that day, and he told me he was on a day hike and doing some trail magic. I said,”Trail magic?” He then instructed me that he had left some sodas and snacks under his car at the trailhead just three miles farther north. This is the first trail magic I have received in Colorado.

I hightailed it to Cottonwood Pass where I found a soda and Clif bar waiting for me. I lounged in the sunshine and enjoyed lunch for a little while.

The rest of the day was spent cruising downhill. In the evening I approached a large climb up to Lake Ann Pass and decided to set up camp at the base of the climb, once again saving the climb for the following day.

The following morning was slow. The climb took a minute to summit. The north-facing side of Lake Ann Pass was still snow covered, which left me with a decision to make and a route to find. There were two glissade slides on the slope, but these seemed firm as the morning sun had yet to soften the snow. I also did not have an ice axe or Microspikes, so I got out my trekking pole to help with a self-arrest if needed. I tried following some side steps that were recently kicked in to descend and traverse that pass but these were still pretty slick so I turned around twice to try something else. From the top of the pass I traversed on rocks to the east and found some snow that was more east facing and had been softened at that point. I turned into the slope and began to descend by kicking steps into the snow, descending at a slow rate. I made it down safely. 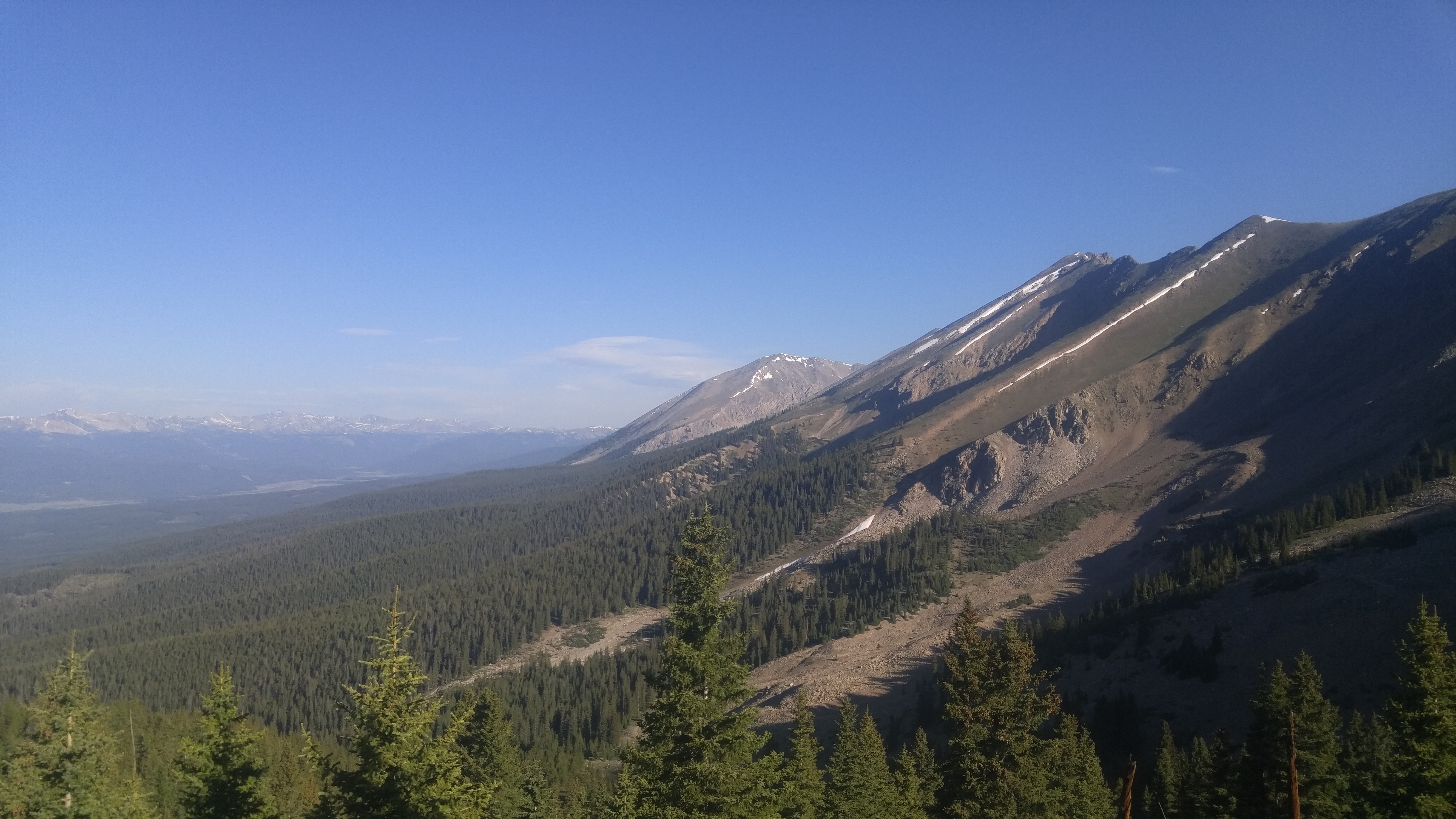 A little longer had passed and I looked at my watch and realized I left camp two hours ago. In that two hours I had only gone three miles.

I had another large climb later in the day, which took me up and over Hope Pass. The southern side climb to Hope Pass is brutal. It is a 2,500-foot climb over 2.5 miles, and it reminded me a lot of most climbs on the AT. That took a little while and on the other side I descended to Twin Lakes. I stopped there and went just a quarter mile off trail to a little food truck, where I enjoyed a veggie burger. That was a nice treat. There was a resupply option there, I but I had enough food to continue to Leadville.

I finished the day with another sixish miles and camped near a forest road. I did not camp alone on this night and enjoyed the company of a fellow thru-hiker. There were also many mosquitoes present so I spent the evening huddled in my tent. 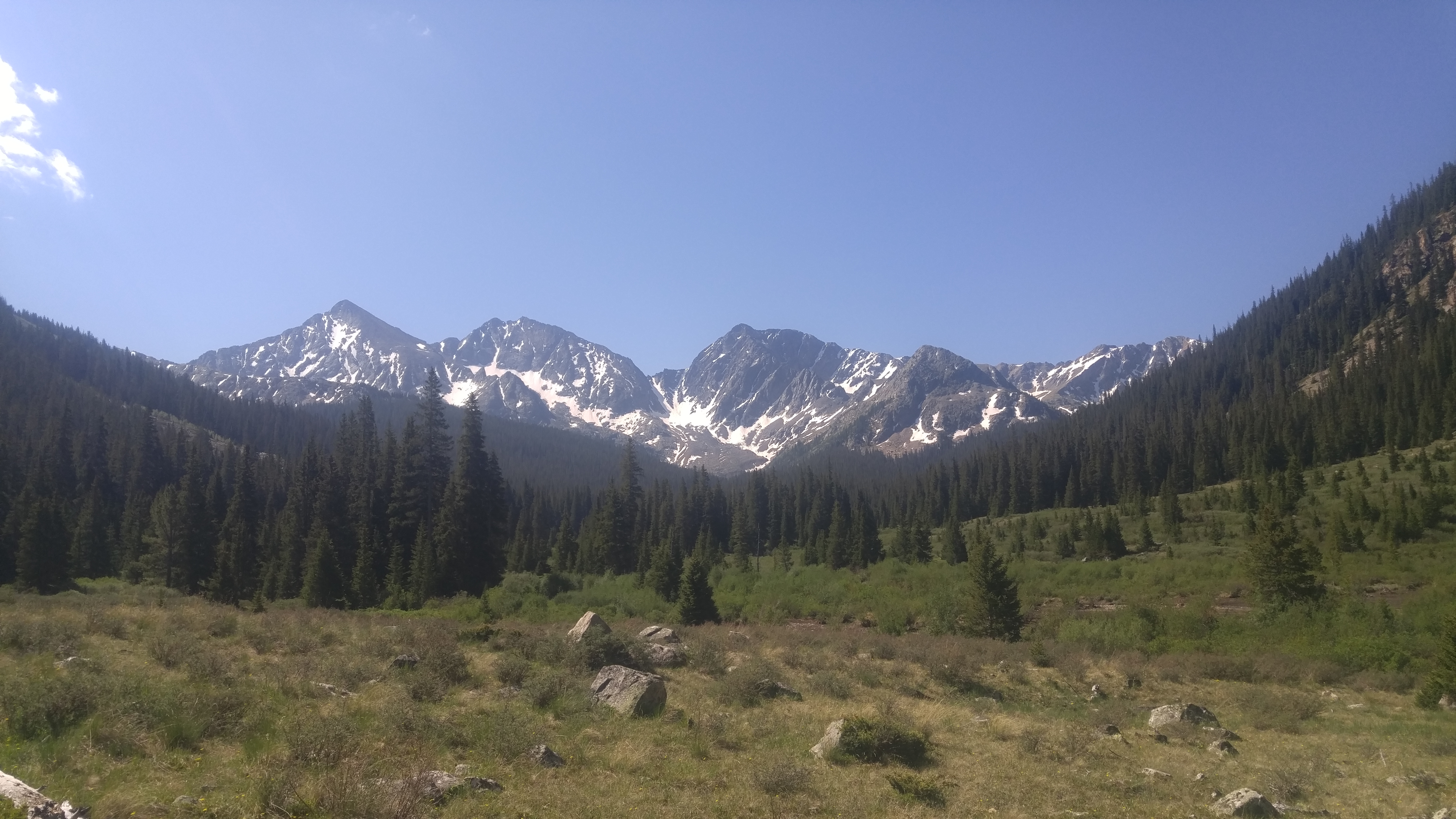 I was moving by 6:30 the next morning. My motivation was to get to Leadville, which was a marathon away. The terrain was nice. For the first few hours I was cruising at 3.5 mph, a quick pace. I passed quite a few days hikers as it was the weekend.

There were a couple of climbs here and there. I was slowed down in the afternoon by some terrible stomach pains. I almost threw up a couple of times and also had some gas coming out the other end. I had a strong desire to stop and pitch my tent for a nap, but I pushed on. There were a few times I stopped and took a seat next to the trail, but the mosquitoes soon swarmed me and I quickly left.

Eventually the pain subsided and I was able to finish my mileage to Tennessee Pass by 3 p.m. and I started hitching into town. Colorado is a hitchhiking friendly state, and I quickly got a ride. Once I arrived in Leadville there was a trail marathon finishing up. Had I been aware of this before I might have hurried to get here and run the thing! I found a bed at the Leadville Hostel and booked it for two nights, which meant tomorrow would be a zero day.

The next section to Breckenridge was a short little stint, totaling 37 miles. Once I got back on trail I had a short day in the evening. I had a fairly terrifying run-in with a momma moose and her two little ones. As I was quietly walking through the woods I spooked them. The two little calves took off in the other direction and momma moose came trotting toward me. After taking a few slow steps back with outspoken calm words, I quickly turned and darted into the dense pine trees. I probably backtracked  100 yards through the woods. Eventually I found my way back to the trail, where I waited. Two other thru-hikers showed up and I told them about the encounter. We proceeded in a loud fashion down the trail together. I only continued for a few more miles as night was closing in, and that is how I celebrated my 50th day on trail! 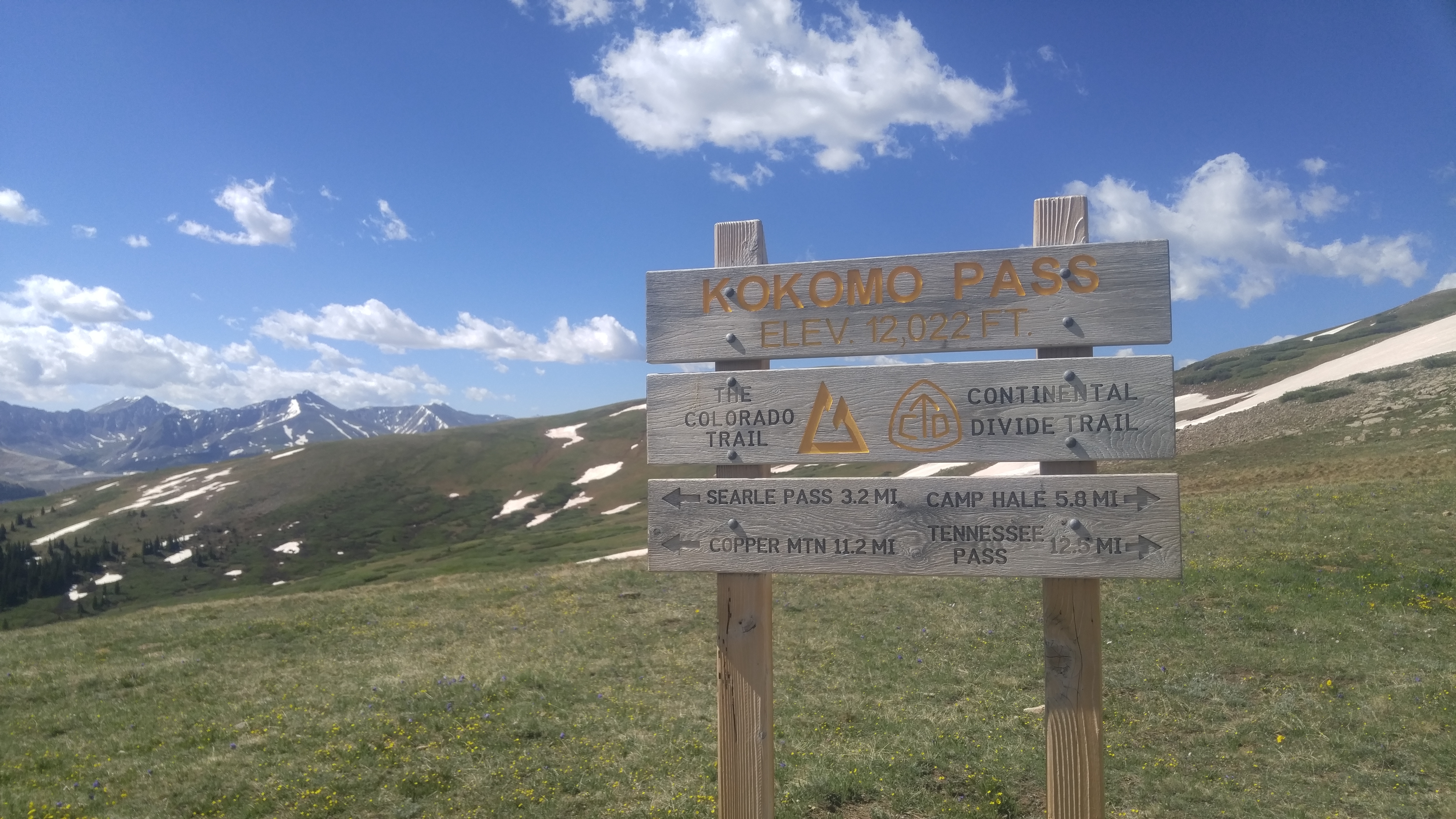 The road crossing had a very convenient bus stop. So I waited there for five minutes and the bus swiftly carried me into town.

I am taking another zero day here in Breckenridge. Everything is groovy. I have not seen too many CDT thru-hikers around, just a couple here and there. Mostly I have been seeing many southbound Colorado Trail thru-hikers. The weather has been wonderful. I’m looking forward to getting back out tomorrow and then I’ll be meeting my wonderful parents and brother in a little over a week.

I was born and raised in Front Royal, Virginia. I attended Randolph College in Lynchburg, Virginia and received a degree in Environmental Studies. I am now exploring the west, and I've have worked seasonal jobs in Alaska, Utah, and Montana. Currently I am living in Mammoth Lakes, California and exploring the Eastern Sierra. I do lots of skiing in the winter and then backpacking and trail running in the summer. I completed the AT in 2014 and PCT in 2016, this summer my brother and I are taking to the CDT to finish my triple crown. On trail I go by Top Nach.