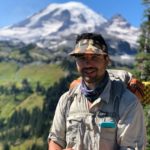 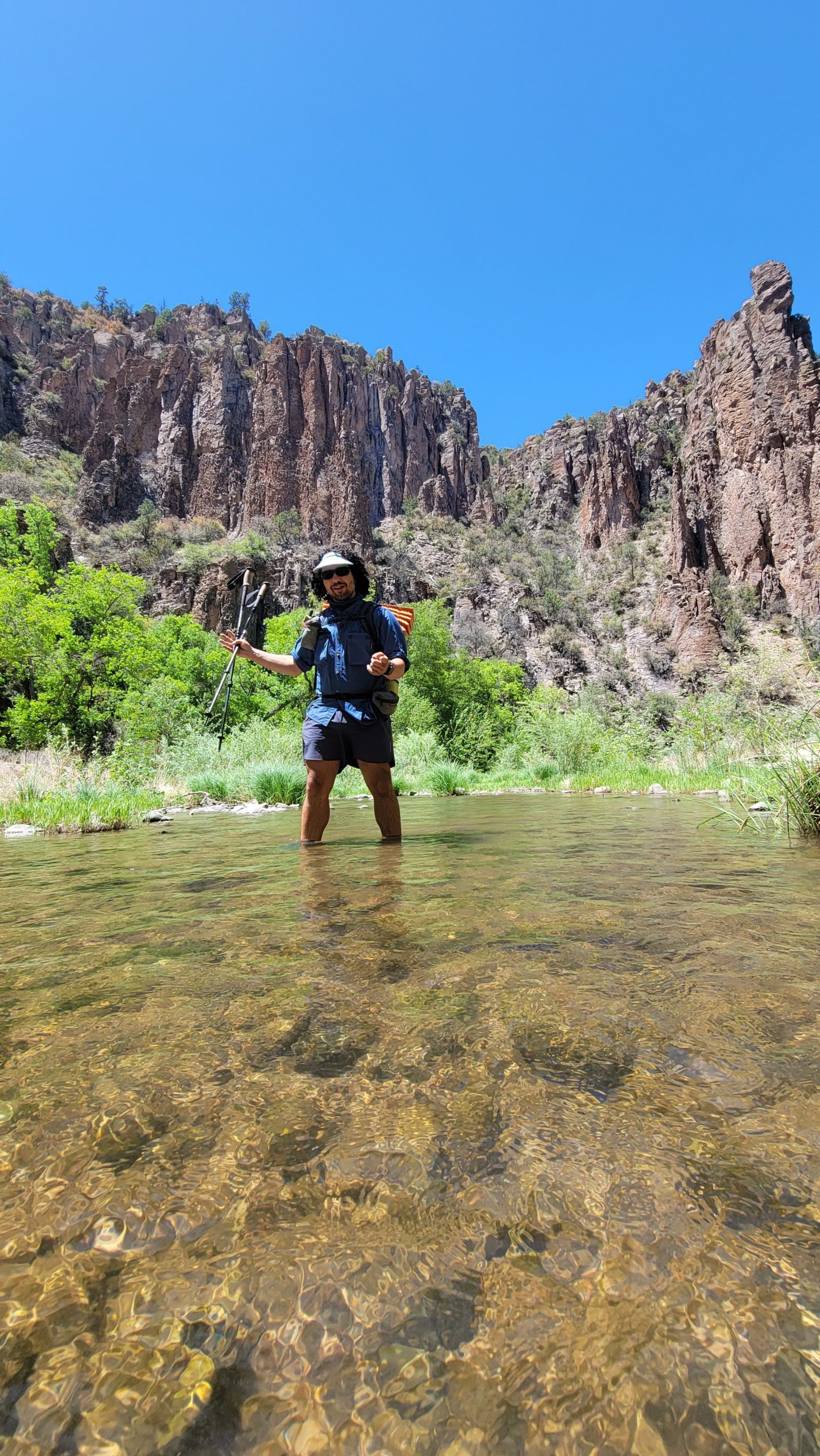 It all started with a flight to Tucson. My partner and I enjoyed a weekend of some of the best Mexican food the US has to offer. We indulged in mariachi music and Saguaro National Park (west) all weekend before eventually saying our goodbyes. The next day I hopped on an Amtrak bound for NM.

On the morning of 5/10/22, Cleansweep and I met the CDTC shuttle for our trip to Crazy Cook. With us were Waldo and Dread Pirate (who would get his trail name later in the day; we met him as Alex). Out visit at Crazy Cook Monument felt borderline unceremonious. Just a few quick photos and we were off – Canada bound!

Immediately we were thrust into flat cow country. What the trail lacked in elevation change or scenery it made up for in grueling temperatures and sunbaked exposure. Days would start hours before sunrise. Usually I’d siesta under whatever shade I could find from about 11-4, then hike until after sunset. Many hikers succumb to heat sickness in this section, so hiking under the cover of night helped avoid the hottest parts of the day.

Day 4 brought a quick walk through Lordsburg to eat some human food and resupply before pushing into the night towards our next destination: Silver City.

This section was similar to the last, but with the caveat that we now had some small mountains to navigate instead of pure ranch land. It also had several water carries of 20+ miles to contend with. The trail climbed into a oak savanna of New Mexican hills but our gain did little to stimy the blazing sun. Hikers congregated like animals around each cow tank we could find. Everything felt so fresh and new, and I was glad for the company.

Day 6 brought the first true scenery of the entire trail up until that point: a sandy wash lined with beautiful rock formations. By this time I was feeling deeply sleep deprived and was eager for a bed and true laundry.

My hiking companions and I would wake up at 4 AM the following day to crush the road walk into Silver City as fast as we could. We arrived in town by mid morning, secured accommodations, and resupplied. I opted for a new filter (thanks, cow ponds) before hitting the local brewery to enjoy a well deserved meal.

I left Silver City with Cleansweep, Waldo, and Dread Pirate. The trail out of town was unremarkable, but by that evening we had come across yet another first on the CDT: natural water. All I’d heard hikers gossip about until this point was the Gila River. It took nearly 200 miles, but I had finally reached this infamous river.

Days 9-11 were spent traversing the river canyon and enjoying its many amenities. Cool, fresh water meant I only needed to carry a liter of water at a time. Almost immediately I lost count of how many times I crossed the river. I was glad for it – the river crossings kept me feeling cool and refreshed. I picked up my first resupply box at Doc Campbell’s Post and mailed home my sun umbrella on day 10. Later that day I relaxed in Jordan Hot Springs, which are only a short walk from the Gila alternate.

The 11th day brought an end to the glorious river. I immediately was thrust back into ranch land, albeit now I had climbed onto the Colorado Plateau. Scraggly Ponderosa forest now dominated the landscape. Our route kept us mainly on dirt roads through this section. We hit three 30-mile days in quick succession to take advantage of the easy grade.

On day 13 I hit the Mangus Mountain alternate. The mountain itself was a welcome change in elevation before going back to flat dirt road. I spent the night at Davila Ranch after a 35 mile day. The next morning was an easy walk into the infamous Pie Town.

Once in Pie Town, I made sure to secure a bed at the Toaster House and nab my resupply box from the PO. Several hikers and I later enjoyed pizza and pie at Pie-O-Neer, one of only a few businesses in the sprawling metropolis of Pie Town. The Toaster House was crowded with CDT thru hikers and bike packers alike. I needed rest more than socialization, so I went to bed early.

I left Pie Town the following day. Cleansweep and I got water at TLC Ranch around lunch time. Once again, the trail was almost exclusively dirt road. Excitement hit in the early evening when I spotted elk as well as llamas- yes, llamas, playing on the horizon. At about 30 miles I hit the Cebolla alternate, which I opted to take.

The Cebolla was more of the same. Dirt roads, rattlesnakes, cow tanks. Around lunch time the trail took am exciting twist: it transitioned from dirt road, to paved road. From here to Grants I’d have to dodge roadside traffic. Luckily this section takes hikers on the edge of El Malpais National Monument, which offers a beautiful array of geological features to enjoy (from the pavement). Cleansweep began to develop shin splints here, so we took things easy and stopped around 28 miles on the day.

On day 17 we walked into Grants, New Mexico. I gave into my fiendish desires: I ate Denny’s, Dairy Queen, and Taco Bell all within a few hours of each other. Cleansweep’s ailments only had gotten worse, so I was convinced to stay with him and take a zero day in Grants. Mainly I watched Top Gun and ate ice cream while he rested.

Here’s where things get a little hairy. Multiple sections of trail were closed north of Grants due to high fire danger. Most hikers at this point were seeking rides up to Chama. Waldo, on the other hand, had a proposition: an alternate path that would take us back to the CDT just north of the closure. It involved lots of road walking, and water sources were questionable, but otherwise it seemed doable. Why not? It would buy some time for snow to melt in CO, plus give Cleansweep some time to rest. I was in.

Day 19 was my first 40+ mile day in years. Miles were easy on the paved road, and I was refreshed from a restful zero day in town. Waldo and I would eventually camp as the sun began to set.

The two of us would rejoin the official CDT on the afternoon of day 20. Much of the proposed alternate was actually quite scenic: impossible rock formations dotted our landscape while we cooked under the New Mexican sun. Once back on trail, we nabbed water at the closest cow tank, and eventually made camp near a wide wash.

All of the long mileage had caught up to us. Pesky winds (and even rain – moisture from the sky?) prevented Waldo and I from getting much sleep. The trail was sandy and ran up and down a number of shallow canyons that day. By midday I felt run down. I decided to nap, take some caffeine, and listen to a few podcasts in the afternoon. I squeaked out roughly 28 miles before crashing for the night.

The 22nd day of the CDT brought an easy 13.5 mile walk into Cuba, NM. Immediately I enjoyed a breakfast burrito and slice of cherry pie at a local joint. I’d given the previous road walk the old college try, and while it wasn’t awful, I wasn’t eager to road walk again. I decided it was best for me to hitch from here up to Chama, where friendly faces and the prospect of non-road walk hiking existed. But first, I had to hitchhike.

I picked up my first car within a matter of minutes. The good couple who picked me up brought me 4 miles before they had to depart my route.

My second driver came along about 20 minutes later. He was an EMT in ABQ. Ironically, after sitting in his car a few minutes, I realized he was driving drunk. An IPA sat in the cup holder. His arms would fan out wide amidst his story telling, threatening to wack me in the face in his exuberance. He even took me to his house despite my polite protests. At this point I began to get more worried than ever. Luckily some arborists were working next to his house, which made me feel significantly less likely to be murdered. After some time, he eventually began to drive me in the direction of Chama once more. When he got out of the vehicle to relieve himself of his alcohol-laced urine, I quickly took the opportunity to exit the car and make my escape. He was understanding in the end and insited on a drunken hug.

I was now stranded in the middle of nowhere. A red pickup came to my aid before too long. The man didn’t speak much English, but at least he was willing to take me 20 miles up the road.

My final ride was from an 84 year old man from Chama. He notified me of his faith, and that he moved to Chama, NM a few years back because he believed it would be safe from the upcoming rapture. He exchanged stories about his youth and about being gifted in speaking in tongues. I politely declined his offer of dinner by the time we had arrived in Chama. At last, I was finally free of drunk drivers and religious zealots alike. I was on the cusp of Colorado.

My name is Joe (he/him) - but you might know be as Mr. Overhill. I grew up in the San Francisco Bay Area, and in 2016, I thru hiked the PCT. Since then I have hiked numerous long trails, including the AT, AZT, Tahoe Rim Trail, Wonderland, and more. In my passion to live adventurously, and get others to live adventurously as well, I've dedicated myself to a career in Adventure Travel. Whether guiding travelers up Half Dome, or designing custom itineraries in North America, I am at my best when empowering others to get outside. My professional and recreational pursuits are intended to help bring awareness to the need to preserve wild places and our environment for generations to come.