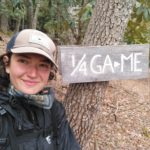 My tramily and I left Lordsburg, NM at 6:30am in the CDT shuttle, a rented pickup truck driven by a man who introduced himself simply as Cal. Cal, a scientist and cowboy, gave a shpeel on the three hour drive toward the Mexican border, that you could tell dozens of hikers had heard before. He pointed out plants and birds between showing us the water caches and warning us about the dangers of overheating. He also mentioned that if you see a mysterious bundle, do not approach or touch it. “The border patrol probably has their eye on it, and the cartel, too” he warned.

The topic of javelinas came up at one point and the five hikers in the car all learned that javelinas are not related to pigs, but more closely related to rhinoceros. Cal told us that they will charge you but if they do, they put their heads down so they cant see in front of them. So if you’re ever being charged by a javelina, simply step out of the way at the last moment.

A little after 9:30 we made it to the border, a dilapidated four strand barbed wire fence with lush green farmland and silos on the other side, in stark contrast the desert surrounding us. A stone by the road, with a few words roughly scratched into it, describing the murder of Frank Evans on May 1st 1907, who apparently insulted the cook and got an axe in the back of the head for it, hence the name of crazy cook monument, the southern terminus of the CDT, just 100 yards away. 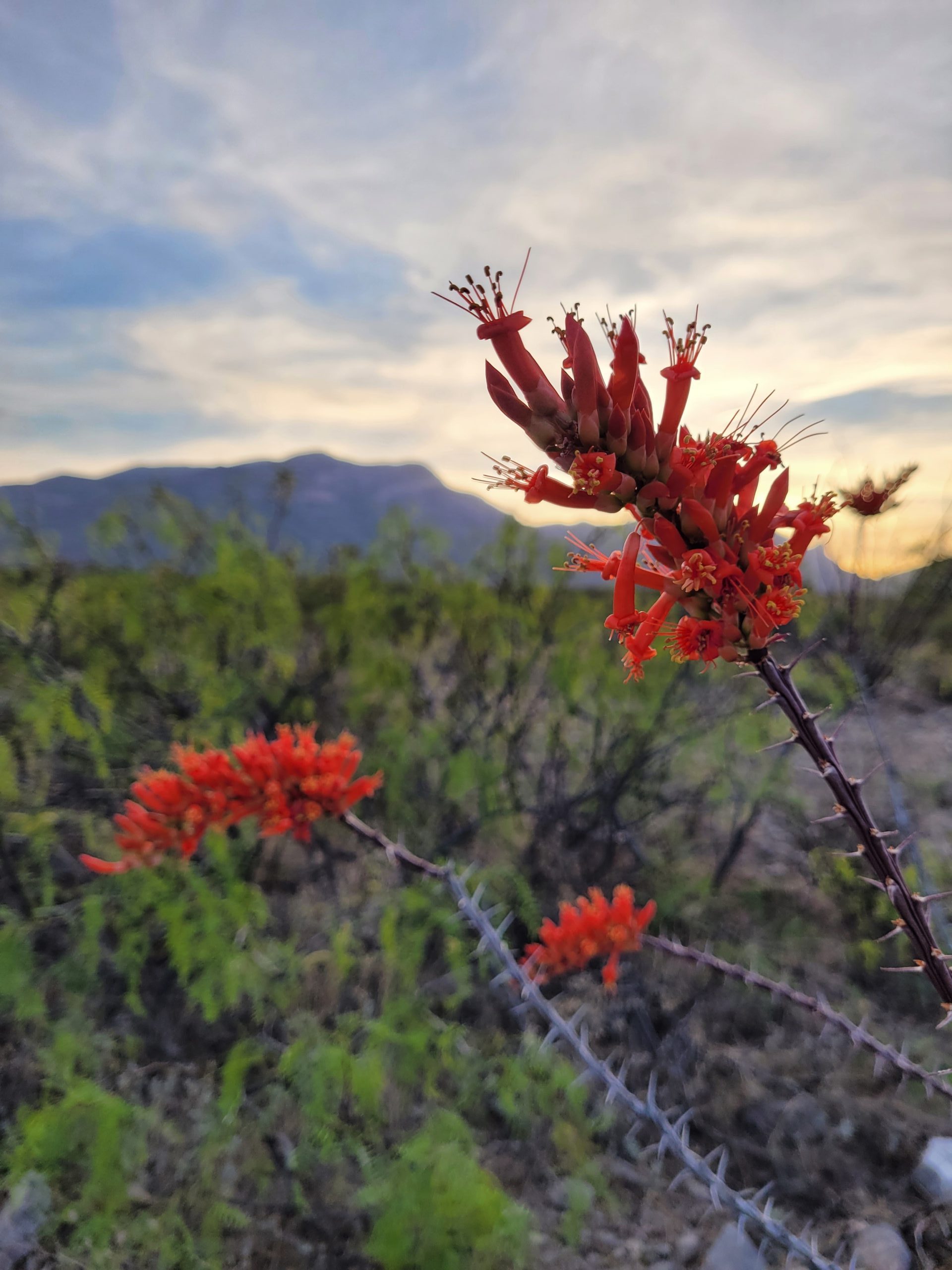 All the hikers, about 10 in total, lined up to get their picture taken and then we were off.

It was a beautiful day in the desert, 64  degrees F when we set out at 10am and maybe in the 80s with a nice breeze for the majority of the day. The trail was surprisingly flat with only a few hundred ft of elevation over the course of 17 miles, but the aches and pains in all of the usual spots that one forgets about between thru hikes came back to me after the first 12 miles. But the beauty of the chihuahuan desert was well worth the work. We saw a half dozen lizards, one snake, ocotillo, yucca,  and cactus flowers, mesquite, and creosote bush, quail, doves, and the chihuahuan raven, among many other plants I haven’t learned yet.

It was 14 miles to the first water caches, where we made our dinners and rested in the shade for two hours before hiking approximately more 3 miles to camp.

Cows wandered around us as we set up camp. 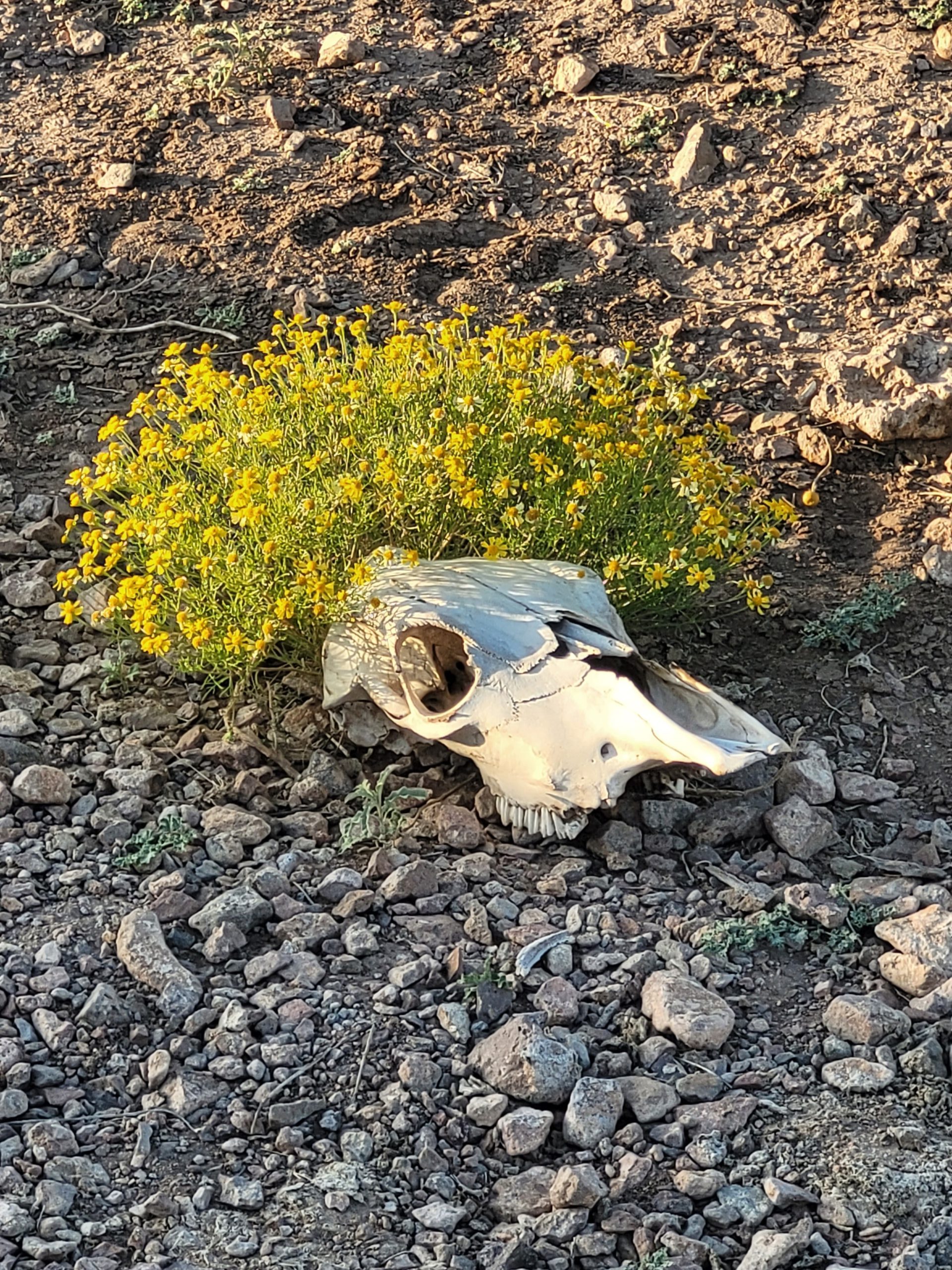 There is, once again, a thin layer of dust coating every inch of my body and belongings. It felt significantly hotter today than yesterday, and there were some small climbs, but for the most part the trail has been nice and cruisey.

Last night, there was lightening in the distance and it looked like it was headed our way, so we set up the tent. It never rained but it was a sweaty night full of tossing and turning. I woke up at 5am and went outside to pee in the dark and enjoy the stars. Then I went back to bed for half an hour before packing up at 5:30 and leaving camp at 6.

The sunrise cast pink hues in the hatchet mountains behind us and illuminated the ocotillo and cactus flowers. The morning was cloudy and it stayed cool until 10am. We made it the 9 miles to water cache two in good time and quickly set out again. Then, loaded down with 3 litres of water, it got hot, mind meltingly hot.

We stopped at a cattle water tank a few miles past the cache and a southbounder told us about trail magic 7 miles ahead but we decided to just go a few more miles before it got hot out to find some shade.

We found a small spot but it was cramped so we continued on after a short while and found a better spot. By the time we reached there, about 14 miles from where we camped, I was exhausted, dehydrated, and my muscles were sore. I flopped down, relieved to be done moving for a few hours and quickly fell half asleep for an hour. When I woke up, I decided to cook my dinner and as I unloaded my food bag, I tossed my bag of chips. I followed the chips with my gaze.

It was coiled up under a tree root, a foot from where my face had been for the last hour. 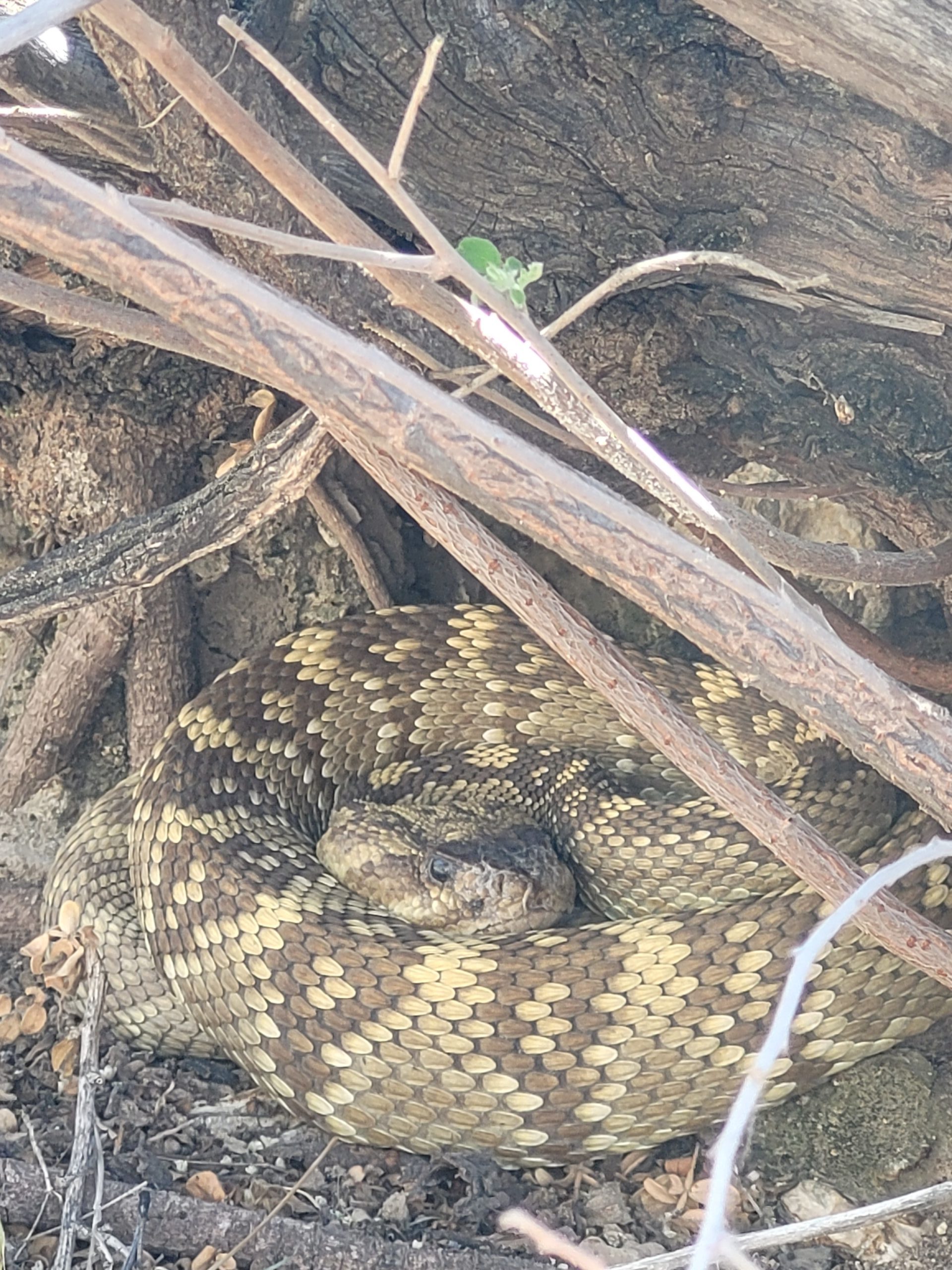 We packed up quickly, suddenly very awake and hiked on around 2pm, the hottest part of the day. We pushed 5 more miles under the brutal sun. The wind made it bearable, but barely. On the small uphill climbs, my heart raced and my brain boiled.

The lone tree was a very welcome sight and the cooler under it was a treasure trove. Mummy was there when we got there, laid out in the shade. When I opened the ice filled cooler to grab a cold Gatorade and a candy bar, it was like striking gold. A half dozen hikers stumbled in over the next couple hours and it was so entertaining to see their faces light up when they opened the cooler. 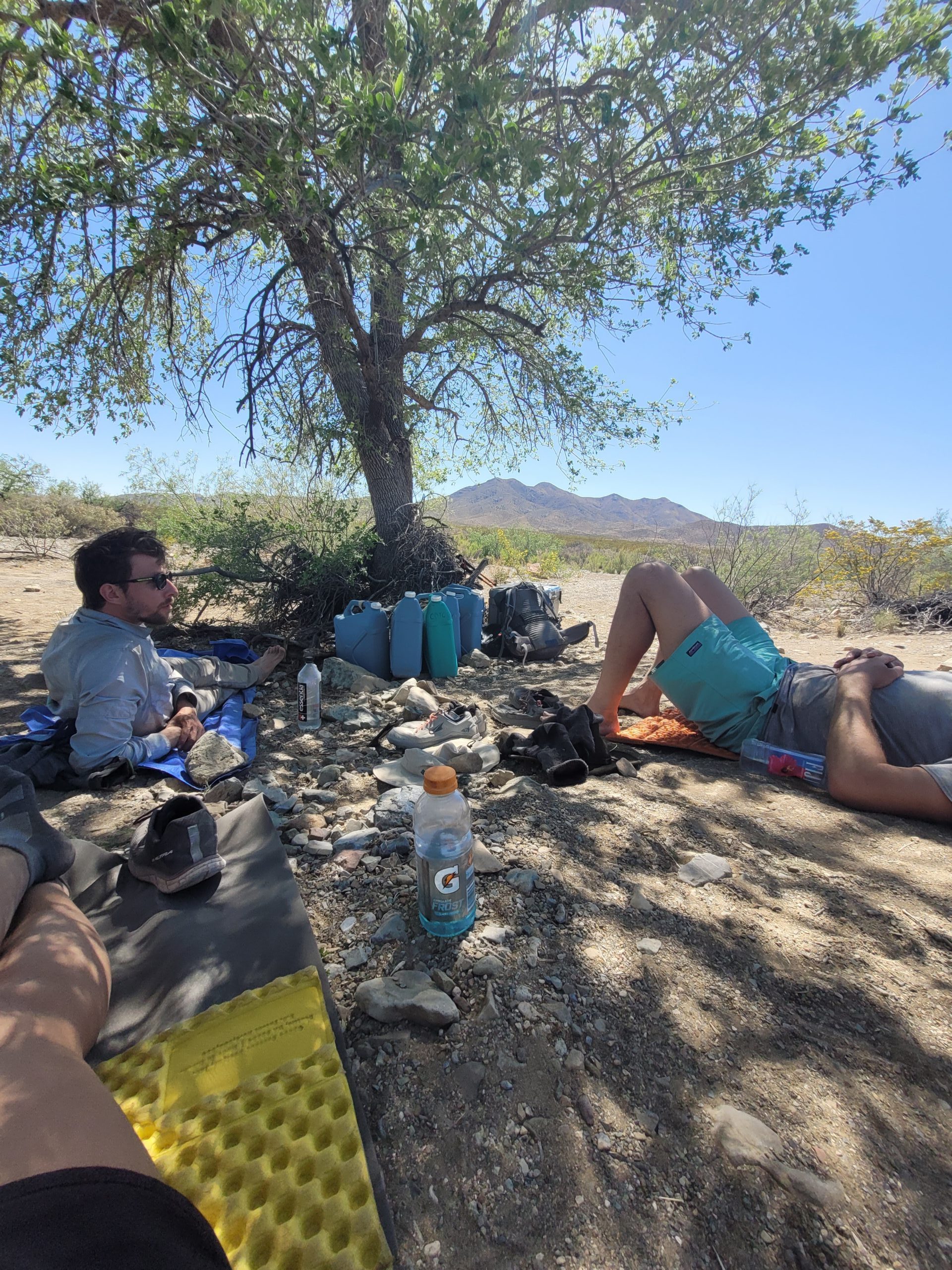 We took off again around 5:30 for the final three miles to well tank full of fresh, clear, cold water. Another blessing in the desert. 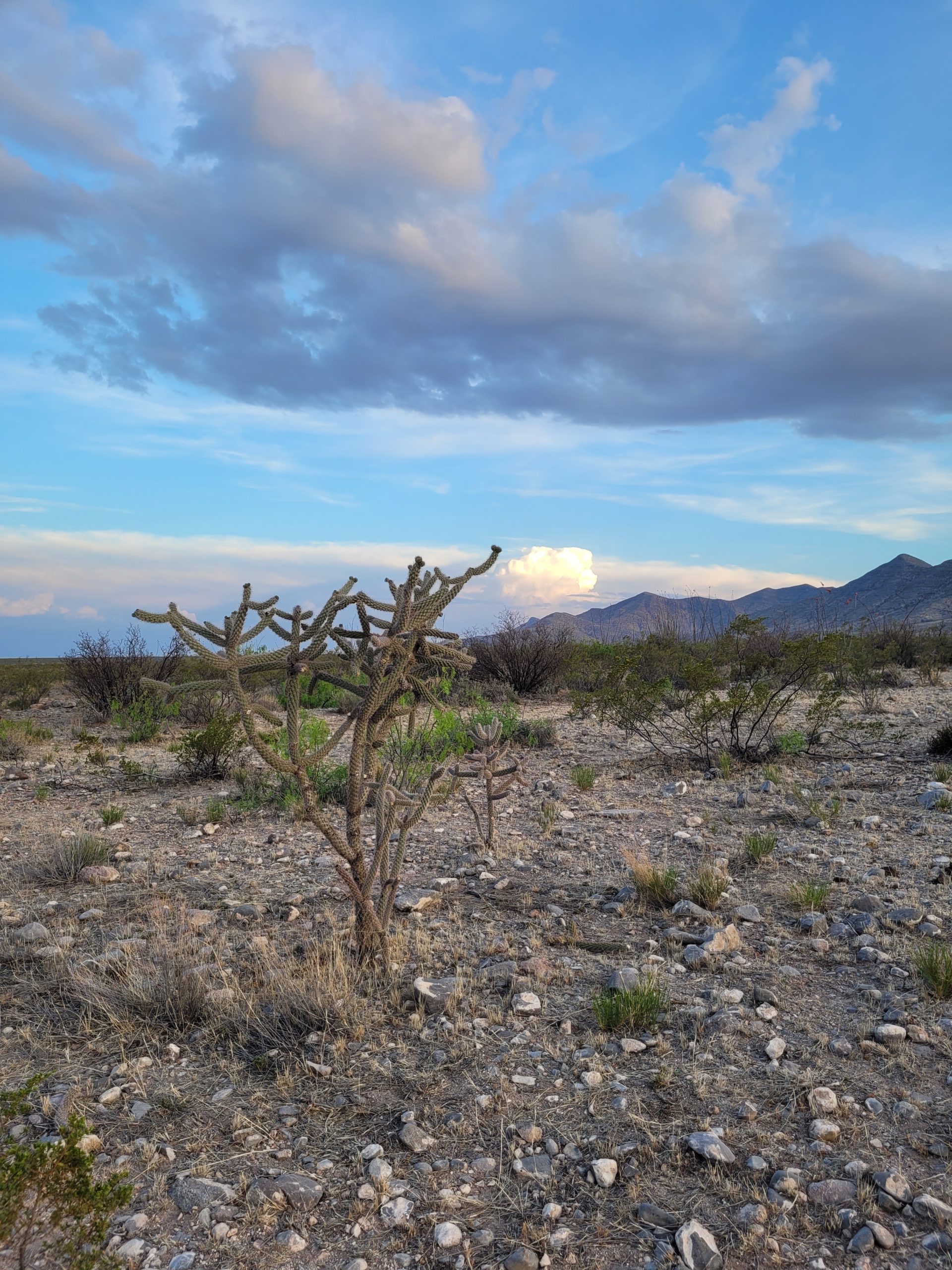 Another early morning led to easy, cool miles to an oasis: a water tank with big shade trees. I got there around 10:30 and had to make a decision. Stay until 3:30 or book it to water cache 3 and hope to get there before it gets too mind numbingly hot. Gunga Din and I decided to wait out the heat at the tank, but I bet him that we would get bored and hike out by 1pm. Sure enough, we climbed the ladder to get water from the tank, ate lunch, and joked around with other hikers for a couple hours, but when 1pm rolled around we were itching to go again. So, knowing it was a bad idea, we set out. The breeze was blowing hard and it was keeping us cool. We were feeling good, singing songs loudly and off key while we passed by the two shade trees between the tank and the cache.

When we made it to the water cache, there was no shade. As we sat and cameled up, I could feel my legs starting to burn and I noticed my hipbelt buckle was broken and barely still functioning. I emailed ULA and ordered a replacement to be sent to the next town. 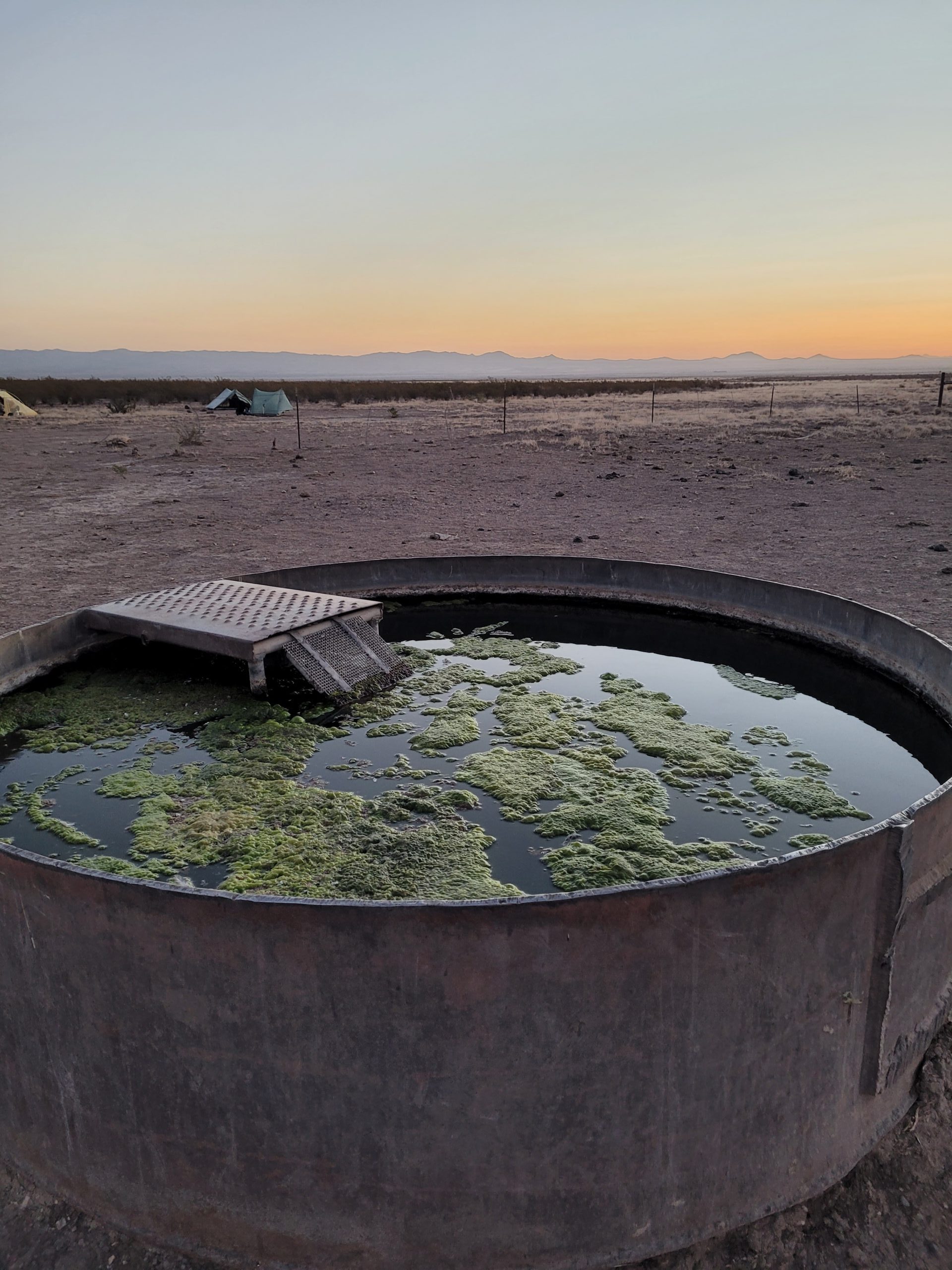 By the time we got to the next water tank, my lips were painfully chapped and my legs were covered in a stinging heat rash. Chapstick, electrolytes, and Sunscreen are not optional out here. Between worrying about my hipbelt and the uncomfortableness of my skin, I have to admit, I was very cranky at this point. Most of my tramily wanted to push on several more miles to get closer to town, but I decided to do just another mile until I found some bushes to sleep behind to somewhat block the dehydrating wind. 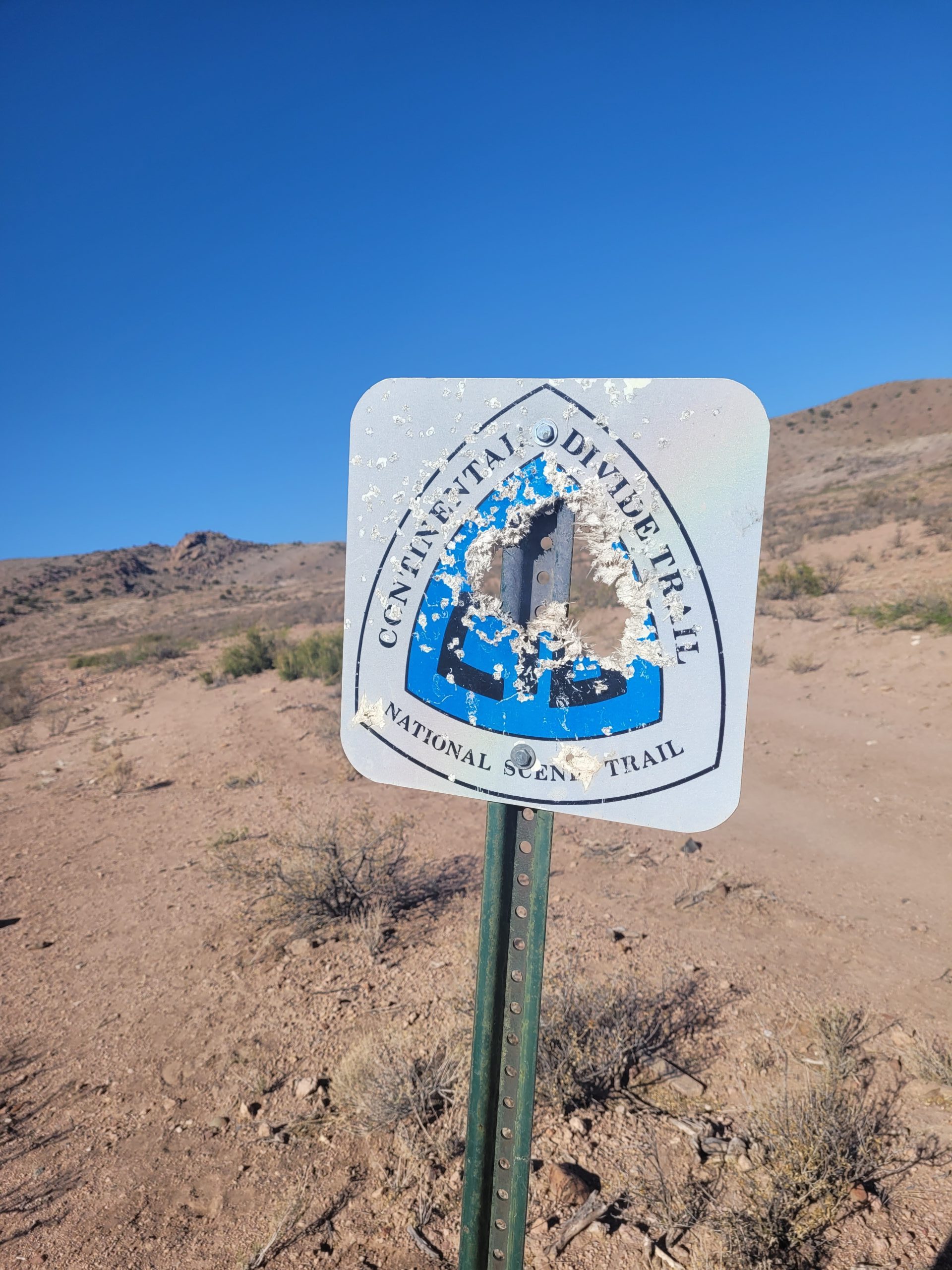 I woke up at 4am with the goal to get to town before 1pm. Setting out at 4:30, I was actually cold for the first two hours of hiking and missing the sun. The kangaroo rats hopping around in the dark made up for the early morning, though.

After the sun came up, the trail skirted around some small but beautiful peaks. After the first 11 miles, my feet started to throb from the constant pounding but I just wanted to get to town. Without a lot of food, my pack was lighter so I ran the downhills and power hiked the uphills. It took every ounce of my being to keep going the last few miles but when we hit the pavement, I was so proud to have done so many miles before noon the fourth day of a thru hike.

Getting my pack off and laying down in the hotel was the best feeling in the world.

Hey, I'm Shady Grove. I'm 5' 3", 26 years old, and like long walks on the beach... oh, wrong profile. Try 2: I'm a jack of some trades and a master of none, but my specialty is organic agriculture. When I'm not weeding or shoveling manure, I like to feed into my adventure problem. I flip-flopped the PCT in 2019, set out to fail but surprised myself and everyone else and somehow set an FKT on the Superior Hiking Trail in 2020, and thru-hiked NOBO on the AT in 2021. Now, I'm 6,000 miles dilated and about to be triple crowning on the CDT in 2022. I was voted most stubborn and smelliest (even though I wasn't the one who didn't carry toilet paper) by my AT tramily, who also claimed that if I was an animal I'd either be a red panda, a raven, or a "non-aggressive wolf silently padding through snow". If you have ghost, cryptid, or alien stories from hikes you've done PM me on Instagram @shadydoesstuff.