Freedom and (a Little) Frustration: Sandal-Wearing Thru-Hikers Explain Themselves

In more than 2,100 miles of hiking the Appalachian Trail in 2016, I never got a single blister on my feet. That was thanks, in part, to the miracle of Leukotape, which I applied at the most vaporous hint of a hotspot. But one hot, dry day on the Alabama Pinhoti Trail in November 2018, when bad intel on water sources resulted in a dry, 14-mile slog, my feet suffered mightily. Soaking them in the cool waters of a creek at sundown, I winced at the prospect of shoving my blistered, battered dogs back into my Altras for the next day’s miles.

Maybe, I thought, I should try hiking in the Xero sandals I’d brought along as camp shoes. Until then, I’d suspected that the handful of sandal-hikers I’d met on the AT and Colorado Trail might be a few Pop-Tarts short of a box, but my situation called for drastic action. 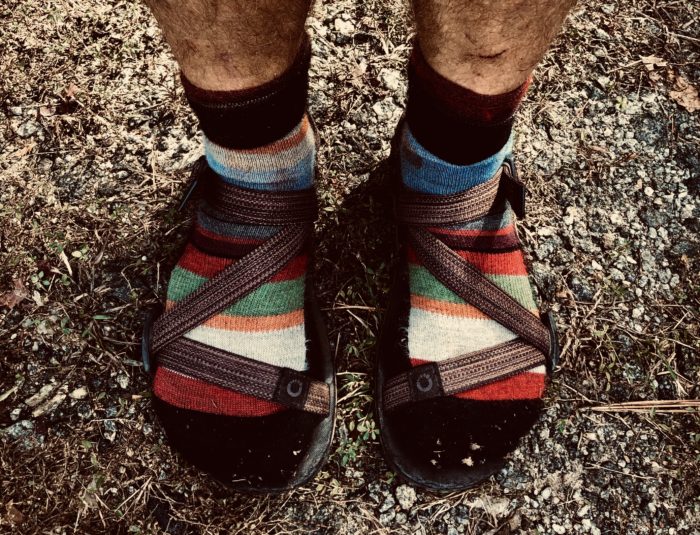 The next morning, I strapped on the Xeros, hoisted my pack, and began walking. Much to my amazement, I loved it. I finished my 85-mile section hike in sandals — both with and without socks. No more blisters, no rubbing, and my feet were just slightly more beat at day’s end than with shoes.

According to The Trek’s survey of more than 300 2018 AT hikers, 75% wore trail runners for the majority of their hike and 20% wore boots, continuing the trend toward lighter, less supportive footwear.

And then there were the hardy few for whom even trail runners were too heavy, restrictive, or uncomfortable, who opted to walk hundreds or thousands of miles of unforgiving mountains, grinding rock, and torturous, ankle-twisting roots in sandals.

Why do they do it? I spoke to several veteran sandal-hikers to hear about the advantages and disadvantages, and what to consider if you’re thinking you’d like to give sandals a try. 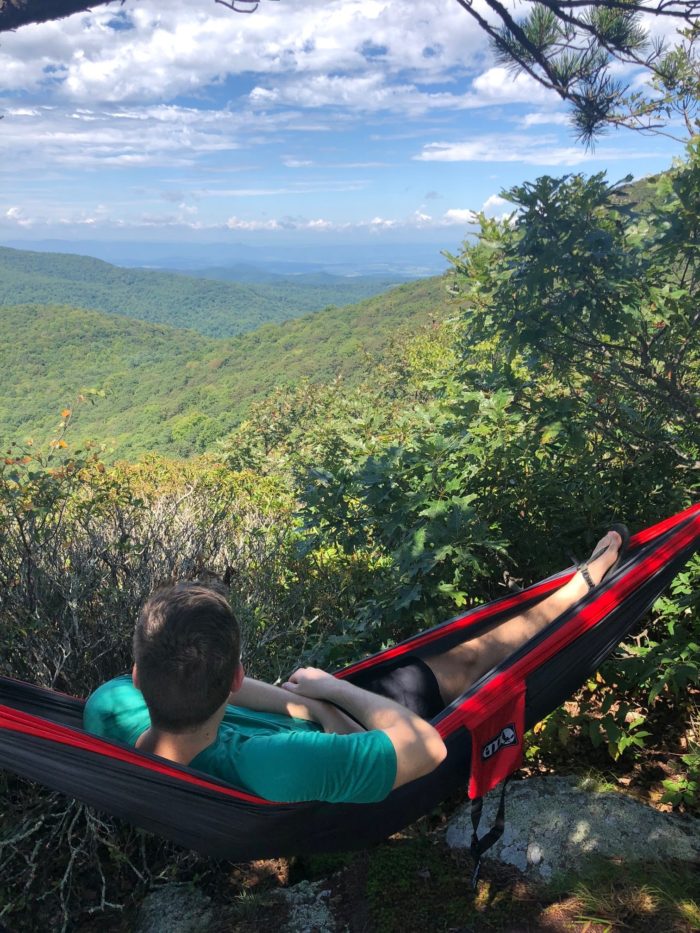 David “Baloo” Miller kicks back in his hammock on the Appalachian Trail, wearing Bedrock sandals. Photo courtesy of David Miller.

For many, wearing sandals is all about releasing your feet from bondage. “I just like that feeling, having the total freedom of your feet,” says David “Baloo” Miller, who has hiked hundreds of miles in sandals.

The light bulb went off in Miller’s head during a short section hike of the Appalachian Trail in Virginia, when he saw a young woman who was thru-hiking the trail in Chacos. He bought a pair and decided it was “the best thing ever,” and has since switched to minimalist Bedrock sandals.

David “Peacefoot” Valenzuela has hiked more than 12,000 miles in sandals, including two thru-hikes of the AT and Pacific Crest Trail and a thru-hike of the Continental Divide Trail. He had been wearing sandals for years, but only started using them on trails after seeing the legendary Tarahumara Indians of north-central Mexico run hundreds of miles through the desert on sandals made from leather and old tire treads.

“I just like the freedom of it,” says Valenzuela, who is eyeing a second CDT hike in 2020. “As far as hiking and running, once I went to sandals I never had another blister.”

No More Agony of the Feet 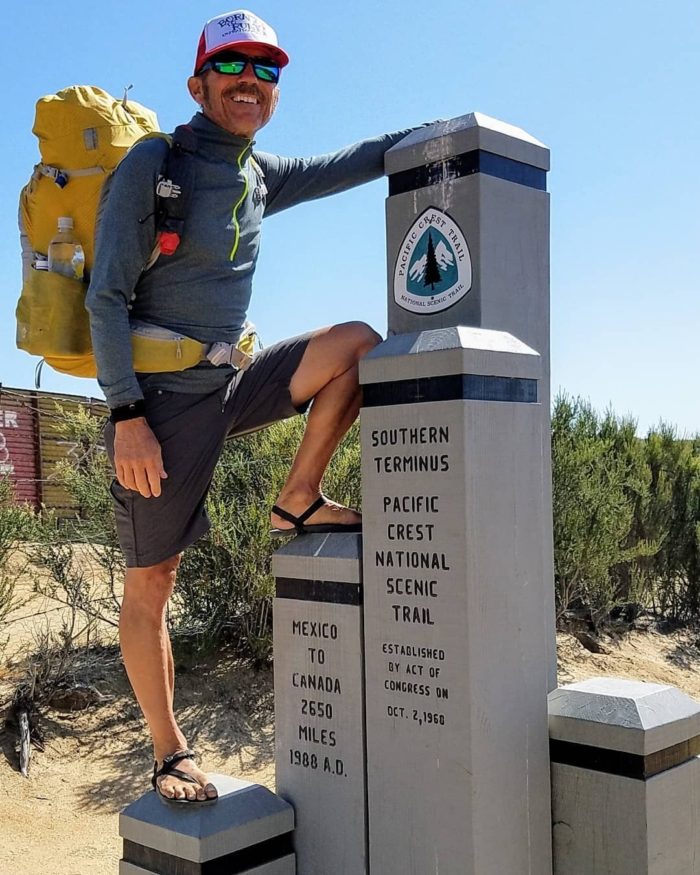 Many hikers turn to sandals in desperation, seeking footwear that doesn’t leave them blistered, battered, and even broken.

Kelsi “Bearbait” Mayr first considered the idea while hiking the AT in 2016 after a new pair of shoes left her hobbling with shin splints in Virginia. A little farther up the trail, she met Mama Jewels, an older German woman, who let her try out her Chacos.

“I fell in love with the idea of hiking in sandals,” says Mayr, who walked the 900-plus miles from Delaware Water Gap to Katahdin in sandals, sometimes wearing socks. 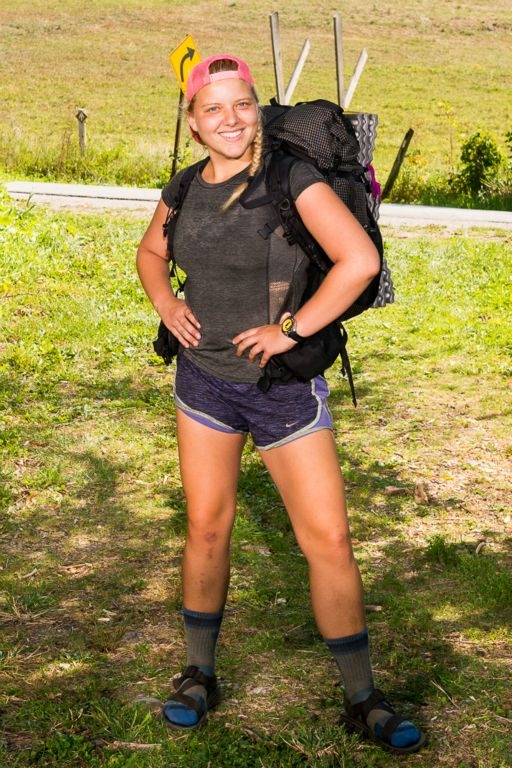 Dustan “Firecracker” Bishop wore trail runners on the AT in 2016, but ran into problems with her shoes on the PCT in 2018. “They were too small and the back was too stiff, so they ended up giving me severe tendonitis,” she says.

Just over 100 miles in, she found some Chacos in a hiker box and ended up wearing them (with Injinji toe socks) until she got off the trail, which she hopes to finish in 2020… wearing sandals. “The Chacos ended up being awesome. Very comfortable overall and not too many issues.”

Stacia “Tinkerbell” Bennett turned to Chacos during her 2016 AT thru-hike, when the Smoky Mountains were giving her feet a daily beating. “I had instant relief from the pain. And they handled the rocky terrain better than my trail runners did,” says Bennett, who since has hiked more than 1,000 miles in sandals. 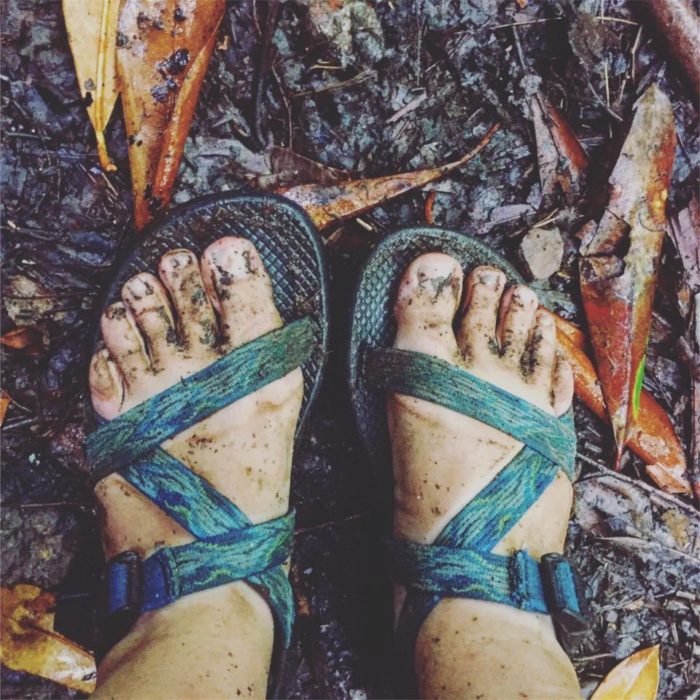 Stacia “Tinkerbell” Bennett, wearing Chacos on the AT. Photo courtesy of Stacia Bennett.

Some hikers say wearing sandals frees them from fretting about wet feet.

“When it rained, it just wasn’t a big deal to get my feet wet. Going through streams was no problem,” says Matthew “Five Star” Bosarge, who thru-hiked the AT in 2016 and is now serving in the U.S. Air Force. “And your feet dry out much faster than in shoes or boots.”

Bosarge was wearing sandals before he started thru-hiking, because of foot problems that developed after he tore an anterior cruciate ligament (ACL) in his knee. When he decided to hike the AT, he saw no reason not to wear his Bedrock sandals.

“It was more comfortable to do everyday walking, so why couldn’t I do the whole trail in sandals?” he says. “After all, this is what people used to wear hundreds, thousands of years ago.”

Wet feet also inspired Valenzuela’s switch to sandals during a 1995 SOBO thru-hike of the AT. “You get very wet on the AT, from rain and streams, and my feet were soaked. Heading south, I kept asking NOBOs, ‘What do you do to keep your feet dry?’ They said, ‘You don’t,’ ” he remembers. “I was so sick of being wet, getting blisters, and my boots taking forever to dry out.”

Valenzuela bought a pair of Tevas—“Sort of a cross between a shoe and sandal”—in Virginia and never looked back. Today he wears (and is sponsored by) Luna Sandals. 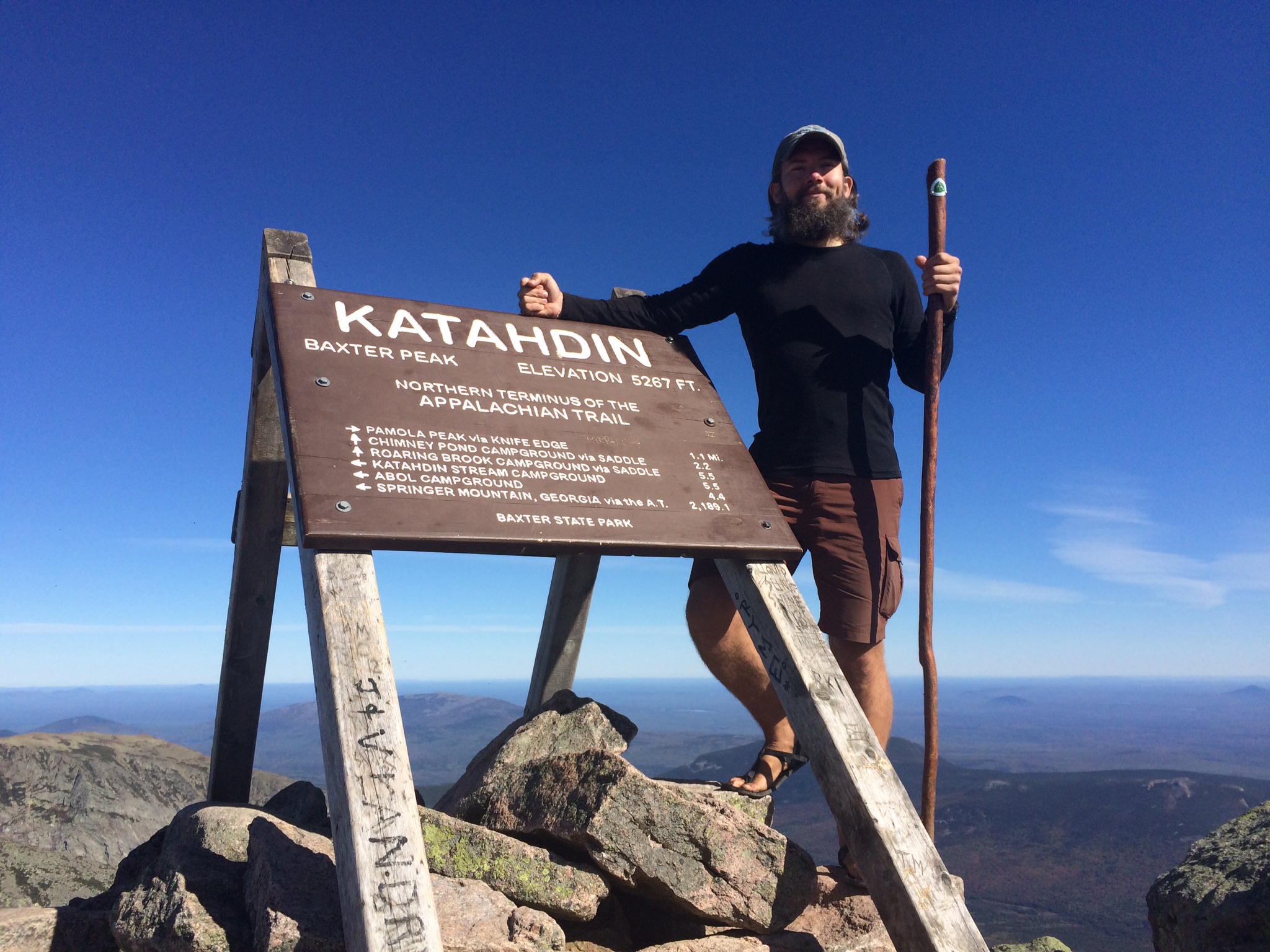 Matthew “Five Star” Bosarge, wearing the Bedrock sandals he walked in from Georgia to Maine in 2016. Photo courtesy of Matthew Bosarge.

Wearing sandals tends to slow a hiker’s pace, if only slightly. But that can be a good thing, some enthusiasts say.

“I think I take much more deliberate steps, because you can jam a toe or kick a rock if you aren’t careful. Overall, I think that helps my knees and joints,” Miller says.

Bosarge says hiking in sandals makes him feel connected to the trail. “I feel very nimble on my feet,” he says. “Climbing mountains just feels natural. It allows your foot to move, all those bones in there, to grip rocks and logs almost like it’s a hand.”

He also discovered an unexpected aesthetic advantage to sandals: “I loved the tan line they gave me.” Bishop agrees: “Very cool dirt lines.”

The Flip Side of Long-Distance Hiking in Sandals 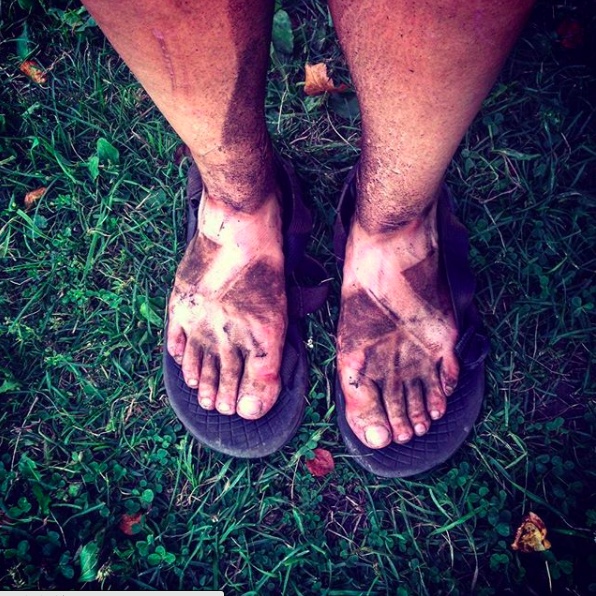 For some sandal hikers, dirt and tan lines are a plus. Photo courtesy of Kelsi Mayr.

But even ardent enthusiasts acknowledge that sandal-hiking isn’t for everybody. There are plenty of downsides, including:

Slower pace, lower miles. “The limiting factor in how far I could hike in a day was not my heart or muscles or endurance, but taking care of my feet,” Bosarge says.

Dry skin. “My feet got super dry and my heels started to crack around Big Bear,” Bishop says. “I taped my heels with either a climbOn Bar or Gold Bond lotion on my feet like a salve.”

Tripping. “I think it added to my uneasiness on rock scrambles, because you can easily catch the top of the sandals while climbing,” Mayr says.

Injury. Valenzuela has dislocated and broken toes while hiking and running in sandals. “There is a steep learning curve,” he says. “You can’t just bomb through rocks like you can in boots and shoes.” 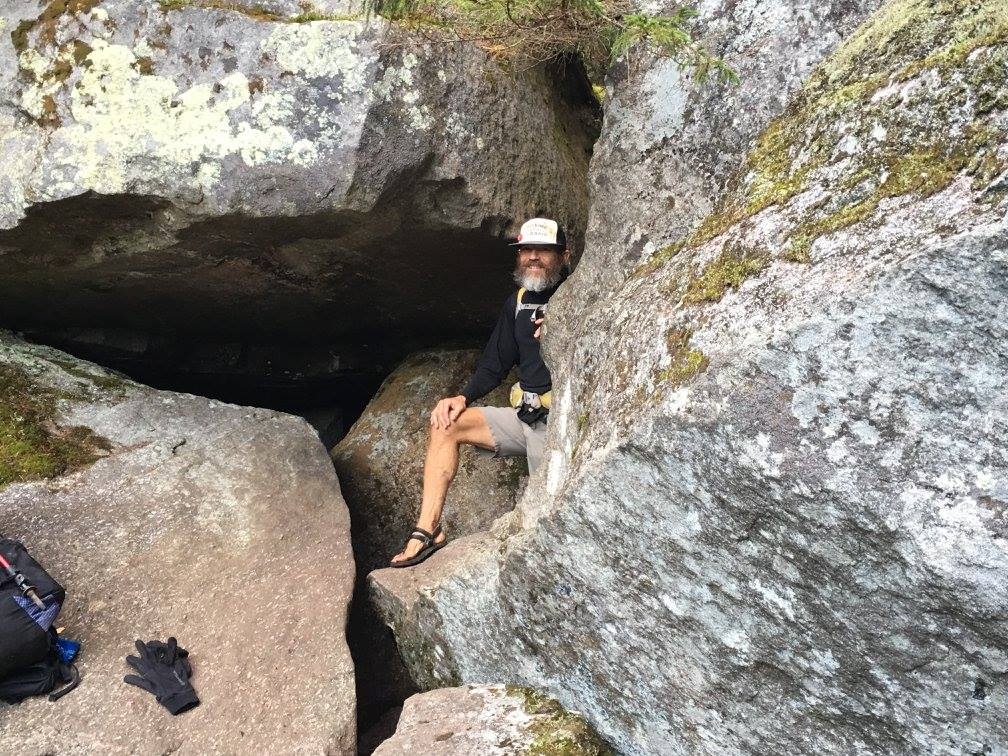 Grit, sticks and pebbles. Get used to stopping from time to time to shake things out. “Walking in sand sucked,” Bishop says.

Plants and animals. “If you don’t wear socks you’re more vulnerable to things like poison ivy or bug bites,” Bennett says. Not to mention poodle dog bush and snakes.

Frozen toes. You can wear socks in cold weather, but sometimes that isn’t enough. Valenzuela has permanent nerve damage in a couple of toes from exposure to cold. 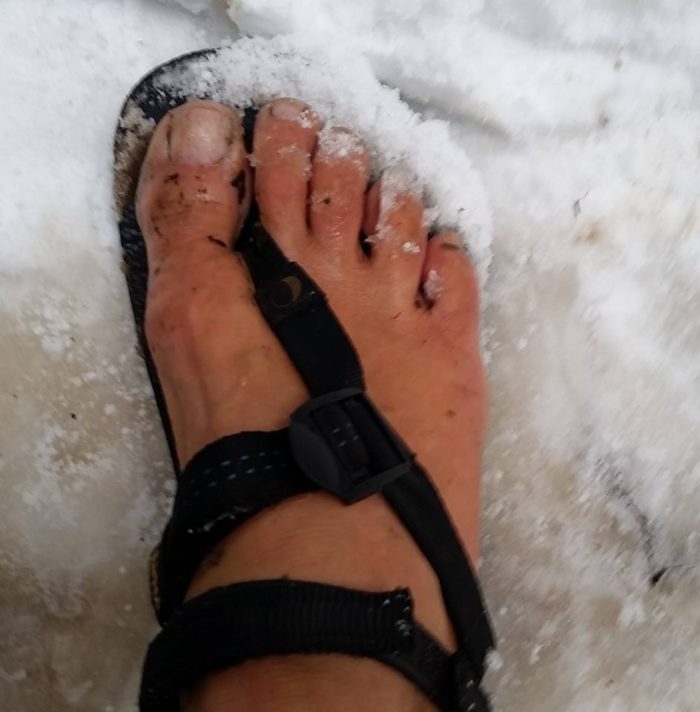 “Stick jamming.” That’s what my AT trail pals and I call the ridiculous, yet surprisingly common, phenomena that occurs when your lead foot pins down a sharp stick at the exact angle to stab your other foot as it swings by, which can hurt even in shoes. “It does not feel good to impale your foot on a twig,” Bennett says.

Foot drain. “At the beginning of my commitment to sandals my toes were extremely tired and fatigued, I guess from gripping the sole,” Mayr says.

Brain drain. Sandal hiking requires constant concentration. “It can be so mentally exhausting to have to pay attention to every step,” Bosarge says. 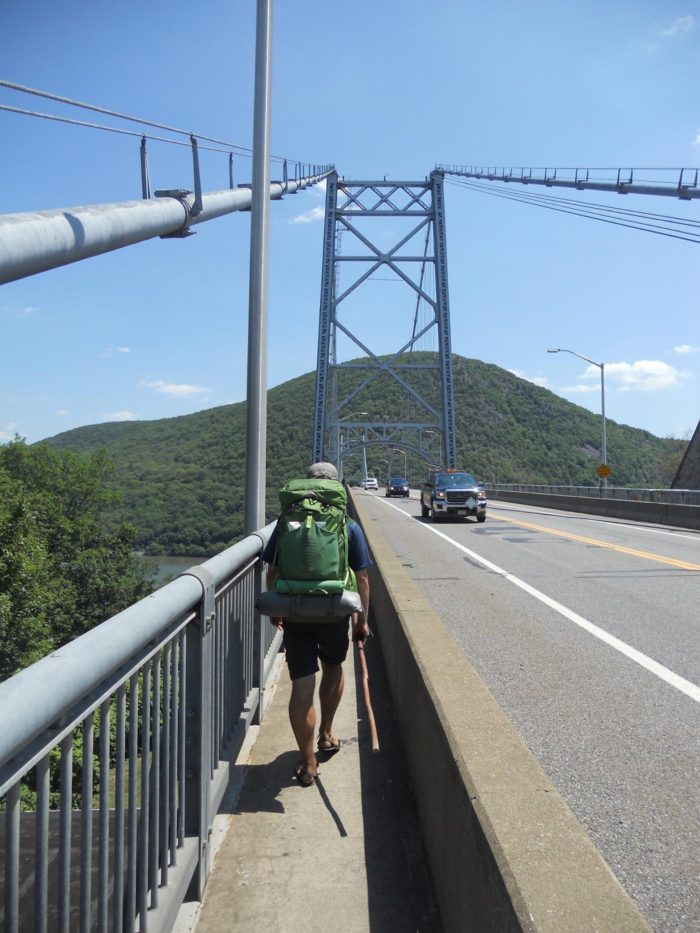 Despite all that, many hikers remain dedicated to their sandals. “I’m planning on doing the PCT in 2020, hopefully in sandals, although I haven’t decided what kind,” Mayr says.

Bennett says she has no choice: “I can’t hike more than three or four miles wearing any other shoes before the pain becomes unbearable, but I can walk all day in Chacos.”

Miller says he sees no reason to go back: “Wearing sandals, I’ve never had a day where I thought, ‘Oh man, my feet are more sore than with shoes.’ ” 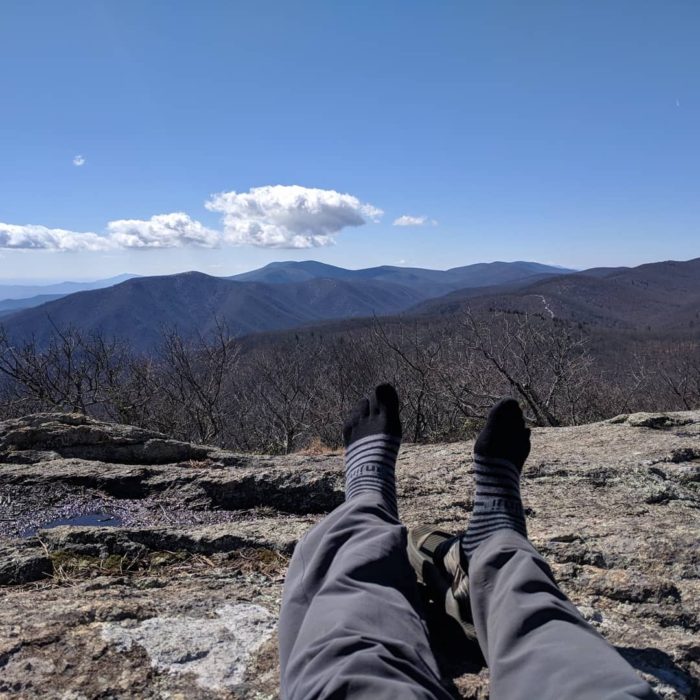 On the other hand, Bosarge plans to limit his sandal miles when he returns for a second AT hike with his fiancée (aka Dragonfly, whom he met at Fingerboard Shelter in New York during his 2016 AT thru-hike) at the end of his Air Force service in two years.

“I’m going to wear a lightweight trail shoe, mostly so I can move faster. I’m interested in the ones Xero is making now,” he says. “But I’ll bring sandals, too, and switch back and forth.”