I was recently given the opportunity to test the Sierra Designs Convert 2 four-season tent. I had not used a four-season tent in the past, but was painfully aware of some of the shortcomings of using a very lightweight three-season model during the winter. By contrast, this was one solid shelter. There was a price to pay in the weight department, but not a terrible one. 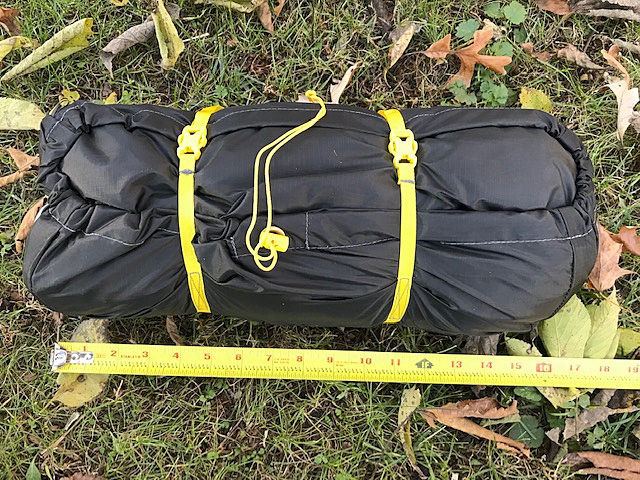 As always, before heading too deep into the field, I try new equipment at a location where my house is an easy fallback. Everything was packed nicely in a burrito bag no larger than a similar three-season tent. The 15 stakes and three poles all fit within a single compartmentalized sack inside. I immediately noticed everything about this shelter was heavier duty than I was used to. Overall “fit and finish” was excellent. Zippers were beefy and ran smoothly.

The tent went up intuitively and quickly. Being four season, there was no exposed mesh when the vents are zipped closed. I sprayed the tent body with a hose. Although not waterproof, the material was certainly water repellent. This tent could be set up in a moderate rain with little water intrusion until the fly could be put on. Staked down and even using just some of the guylines, the pitch was rock solid. 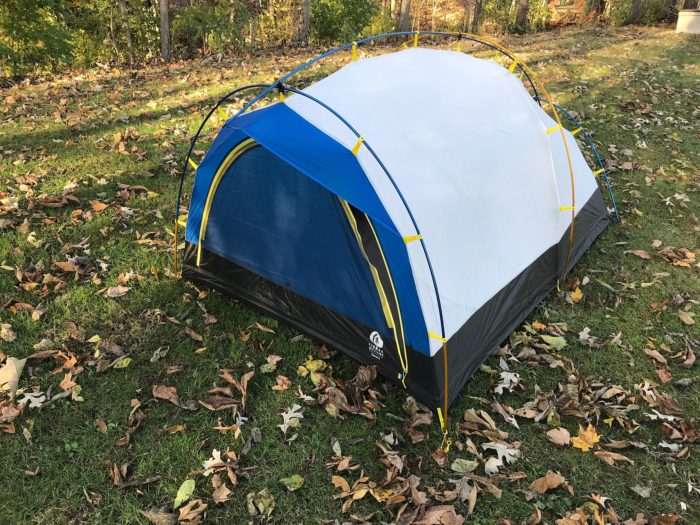 The tent body only.

The sides and doorway are nearly vertical, making the tent seem extremely roomy. Two pads and bags fit side by side with floor to spare. The high (43 inch) peak height was outstanding as far as comfort. The 16.4 square foot vestibule was cavernous, with the door set to one side to cheat the winter wind when entering or leaving the shelter. There are two small pockets; big enough for a phone, headlamp, and not much else. Both the door and foot of the tent had zippered mesh vents.

This was a tent I could see being livable through a multiday winter storm if necessary. It packed up easily and fit back in its storage bag. Time for a real-world test. 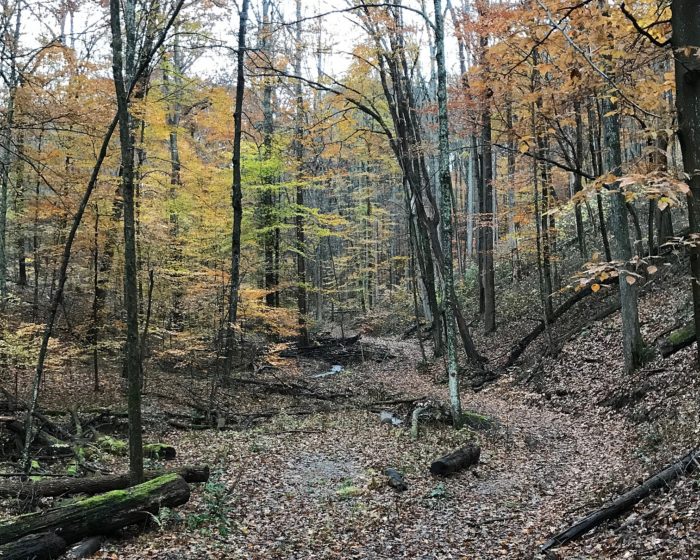 A wet Tar Hollow with the last of fall color still holding on.

Former coworker and fellow backpacker Bill and I were planning a November trip, but the weather doesn’t always want to cooperate at that time of year in Ohio. However, since I wanted to test the tent, the forecast of rain turning to snow, high wind, and a low in the mid-20s wasn’t the deterrent it normally is.

We would be hiking the backpack trail at Tar Hollow State Forest. Despite the touristy name, the trails are fairly rugged for the Midwest. It was pouring rain on the drive out, so a second breakfast at McDonald’s was in order. The delay ended up giving us around six hours of light to hike the 12+ miles we had planned. A light rain was falling as we began. 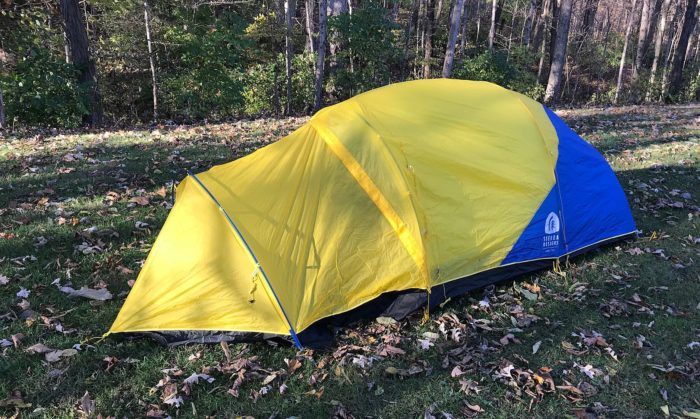 Convert 2 with rainfly and vestibule installed.

Bill was carrying his Nemo three-season tent, so I decided that I’d have no need for the Convert’s vestibule. That decision saved me a bit over a pound in the pack. That was a good decision as the trail was wet, creek crossings were numerous, the hills were steep, and switchbacks nonexistent. It’s not often a trail is steep enough that I feel I’m hiking face to face with it, but that was the case in a few spots.

Conditions slowed us a bit, and with the late start, we arrived at the designated camp area in the dark. As no one else was enjoying the Tar Hollow camp experience, we had our choice of spots on the ridge and found a nice flat area. Certainly wet, but without any standing water or apparent widow makers. 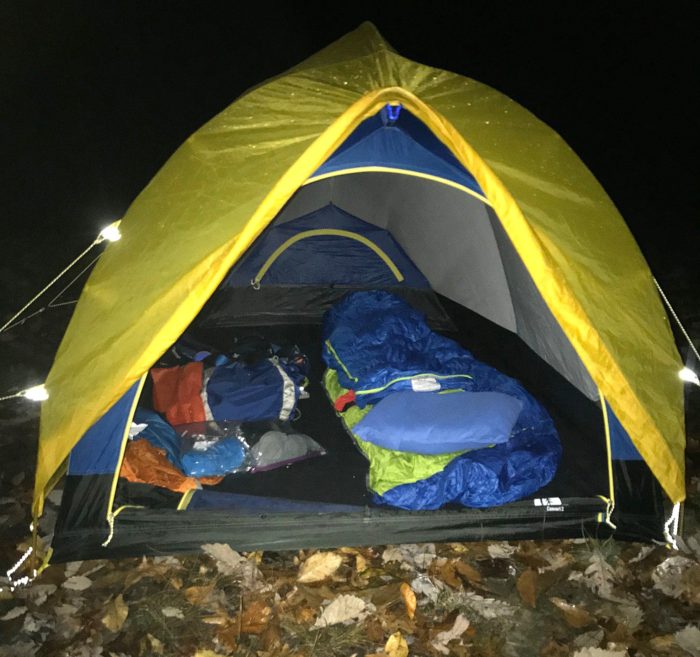 Roomy as a “Palace.”

The rain had quit, replaced by occasional showers of ice pellets while we set up our tents by headlamp. Again the tent went up quickly and the sleeping bag, pack, and all my gear fit in with room to spare. The large doorway is waterproof when closed, so the vestibule would not be missed. I dubbed the tent “The Palace.”

With the wind beginning to howl, I made sure to guy out the sides of the tent. Utilizing a sliding ring, high and low guy-out points are both used while only needing one stake. The Palace was quickly locked down and steady. Ultimately the wind was gusting to 30 mph+ but my abode remained unaffected. 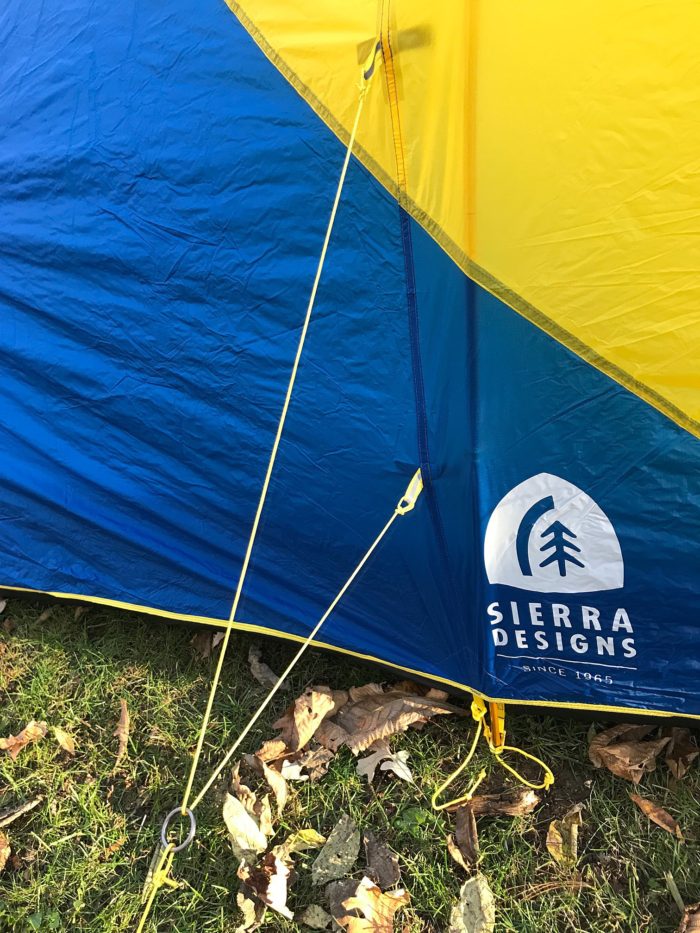 We kept a fire going for a while after dinner, but eventually the increasing wind, dropping temperature, and ice pellet showers drove us to our tents. Since I’d be needing every bit of my 23 degree bag’s warming power, I kept The Palace zipped up tight with both vents closed. It would be a good test of the material’s winter weather breathability.

Nights are long in November, but I slept through till dawn, warm and dry. Despite the wind, the Convert’s fly remained taut and quiet. The temperature was in the mid 20s by morning. In Bill’s tent, his water bottle froze. Mine did not. In addition, I had no issues with condensation whatsoever. For cold-weather camping, this was one impressive tent.

Additional time spent with the tent only reinforced my positive initial impressions. The Convert 2 is a well made, roomy, livable two-person, four-season tent. For one person, it’s downright palatial. However, as with any tent, there are compromises. While lighter weight and competitively priced with other four-season tents, it is heavy and expensive compared to most three-season models. It all depends upon what you are looking for. This is not the tent to take on a summer thru-hike. However, if you’re thinking about expanding your camping horizons into the winter months or deep into snowy mountains, this is a great piece of equipment and worth serious consideration. 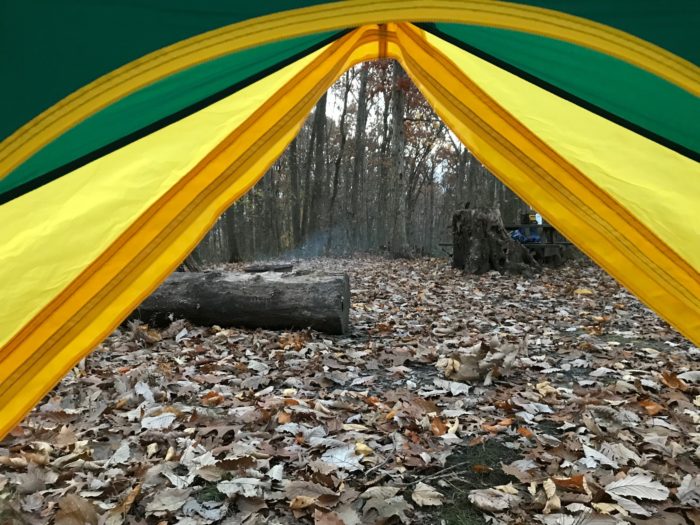 • The two-wall design with a breathable (not mesh) inner wall works well to keep in warmth and let out moisture vapor.
• The weight, while heavy compared to a three-season tent, is light compared to other four-season tents of its size.
• The removable vestibule can reduce weight when not needed but adds significant covered space.
• The vertical walls and high peak make the tent very livable during bad-weather days.
• Tent stakes are T-shaped, tough, and grip well. However, the tops were not machined off at all and are sharp. You’ll need to wear a glove when sinking the stakes by hand.
• Two small pockets are adequate, but no more.
• The suggested retail price is in line with comparable tents at $499.95.
• A footprint is available. It will add nearly ½ pound to your pack and subtract $30 from your wallet.