The Great Strides series will be an occasional feature of The Trek exploring some of the greatest walks and walkers in history, literature, and film.

In 1958, a Welsh immigrant to California named Colin Fletcher took the first steps of his long and remarkable career as a long-distance hiker, author, and backpacking pioneer.

“Ever since moving to the United States two years earlier I had been hankering for a broader look; and I could hardly have hit on a more varied sample than I would find in a six-month, one-thousand-mile walk – off the road wherever possible – from Mexico to Oregon,” Fletcher wrote in his first book, The Thousand-Mile Summer.

A Royal Marines commando and mountain-warfare instructor for Great Britain during World War II, the peripatetic Fletcher lived in Africa before moving to America in 1956. His trans-California walk was just the first of many epic journeys and was the starting point for his long career as the author of 10 classic backpacking and adventure books.

Fletcher—who died in 2007—is all but unknown to most long-distance-hikers. But he was a true pioneer, hailed as “the founding father of modern backpacking,” and deserves to be remembered. 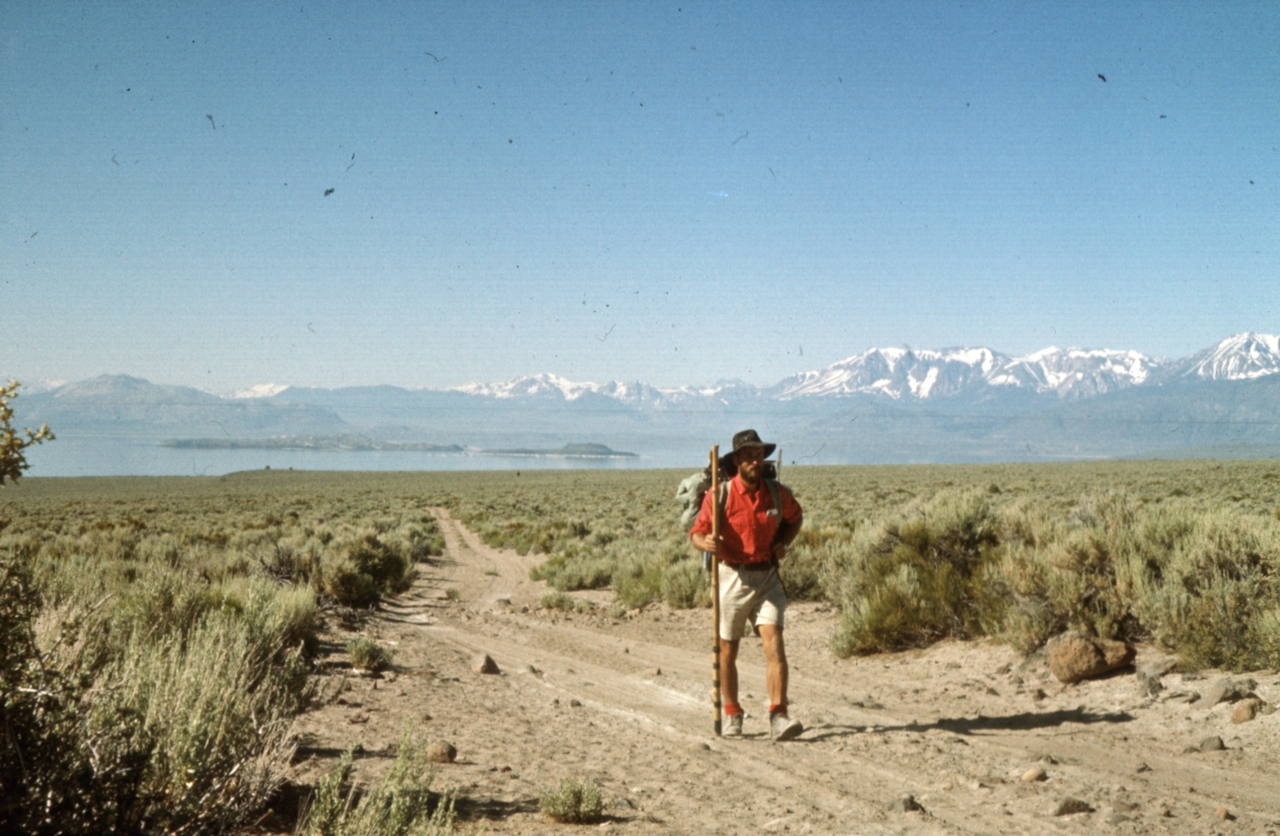 Rather than hike the nascent Pacific Crest Trail, which began appearing on maps in 1939, Fletcher decided to follow California’s wild and rugged eastern edge for his first long-distance trek. He started March 8, 1958, at the Colorado River on the Mexico border and finished in the remote sagebrush plateau of eastern Oregon exactly six months later.

Fletcher found the early going through the stark Mojave Desert mind-numbing. He had to cache three five-gallon cans of water just to survive the bitter-cold nights and brutally hot spring sun in Death Valley.

“The trouble with Death Valley as a spectacle is that it is too extreme. It bombards you with the lowest land and the highest temperatures in America, with 282 feet below sea level and 11,049 feet above, with salt and snow, with mountains uncompromisingly mountainous and plains unbelievably plain,” Fletcher wrote. 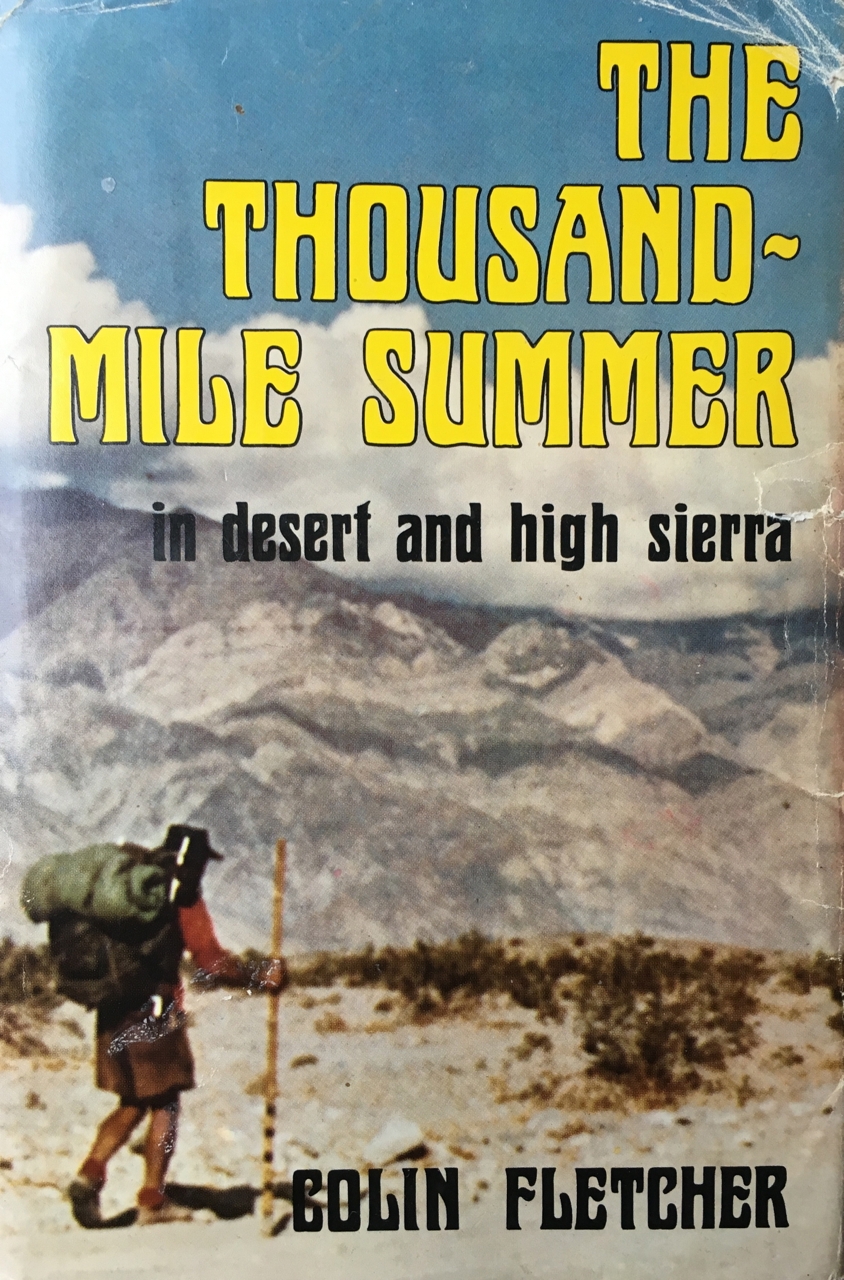 In the Sierra, he climbed up and over 14,252-foot White Mountain Peak, third highest in California, where he marveled at gnarled bristlecone pines that had been there for more than four millennia.

“Death comes slowly to a bristlecone pine. An apparently lifeless skeleton may still support, halfway up one tapering arm, a single living sprig,” he observed. “In failing evening light I stood silent and sober before one such colossal wreck. Somewhere in that twisted structure the sap still ran. Yet when Christ died this tree had already surpassed the halfway mark along its course of life.”

“Wilderness would be worth conserving if it did nothing but make such moments possible,” he wrote after describing a fleeting encounter with “a copper-red dragonfly” in minute detail. 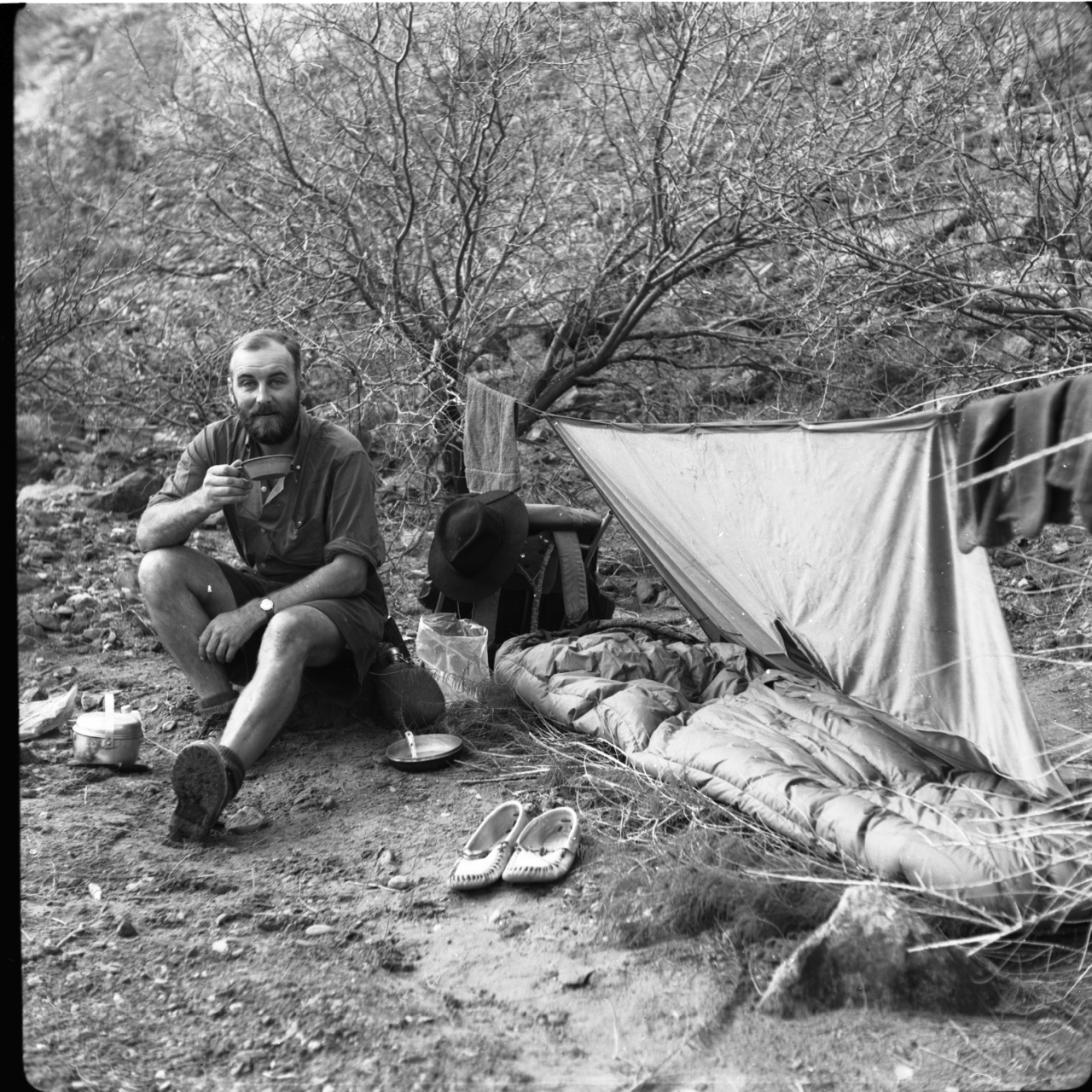 After the crescendo of the Sierra, Fletcher found the last three weeks of his journey, like the first three weeks through the Mojave, less inspiring, but he kept putting one foot after the other.

“I walked mostly along roads that held me at arm’s length from the countryside. For the first time since Mexico, the country was, in any case, too monotonous to keep my mind fully occupied,” he wrote.

While following a series of bushwhacks and road walks of his own design, Fletcher frequently ran into “well-intentioned inquirers” all along the way who said things like, “There’s an easier way than that! Why don’t you take the road to So-and-So?”

He made plenty of mistakes in the early going. But with every step forward, the trail became his teacher, leading him to the same kind of epiphanies as any 21st-century thru-hiker.

“The act of driving your body, very occasionally, close to its limit of endurance is for some reason one of life’s major satisfactions,” he wrote. “And relaxing afterwards is one of life’s most luxurious rewards.”

Among many other adventures, in 1963 Fletcher became the first person to hike a continuous route through Grand Canyon National Park, and in 1989, at age 67, he rafted and hiked the entire length of the Green and Colorado rivers, from Wyoming’s Wind River Range to the Gulf of California. He wrote 10 books about his adventures, as well as the famous “backpacking bible,” The Complete Walker, now in its fourth edition. 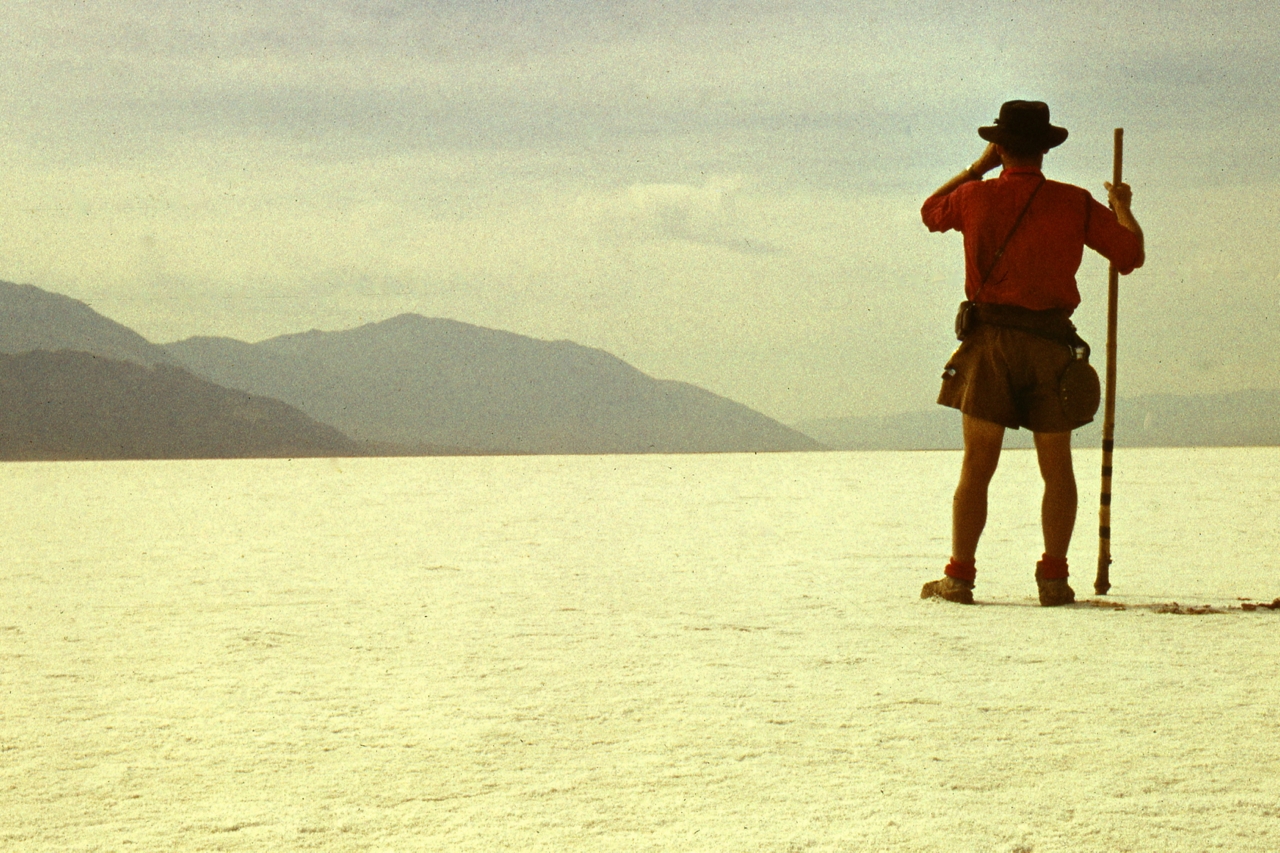 “If you judge safety to be the paramount consideration in life you should never, under any circumstances, go on long hikes alone. Don’t take short hikes alone, either—or, for that matter, go anywhere alone. And avoid at all costs such foolhardy activities as driving, falling in love, or inhaling air that is almost certainly riddled with deadly germs,” he wrote in The Complete Walker.

“And never, of course, explore the guts of an idea that seems as if it might threaten one of your more cherished beliefs. In your wisdom you will probably live to be a ripe old age. But you may discover, just before you die, that you have been dead for a long, long time.”

At the time of his death in 2007 in Monterey, California, at age 85, Fletcher’s claim that his hike “could never be repeated” had yet to be disproven.

But just one year later, a German immigrant named Andreas M. Cohrs decided to recreate The Walk, in celebration of its 50th anniversary, after finding a copy of The Thousand-Mile Summer for 99 cents at a flea market.

While researching and planning for his trip, Cohrs gained access to Fletcher’s journals, maps, and photos, which allowed him to closely follow the route of his predecessor, with some exceptions. Cohrs wrote about his own adventure in the 2012 memoir, California Serendipity. 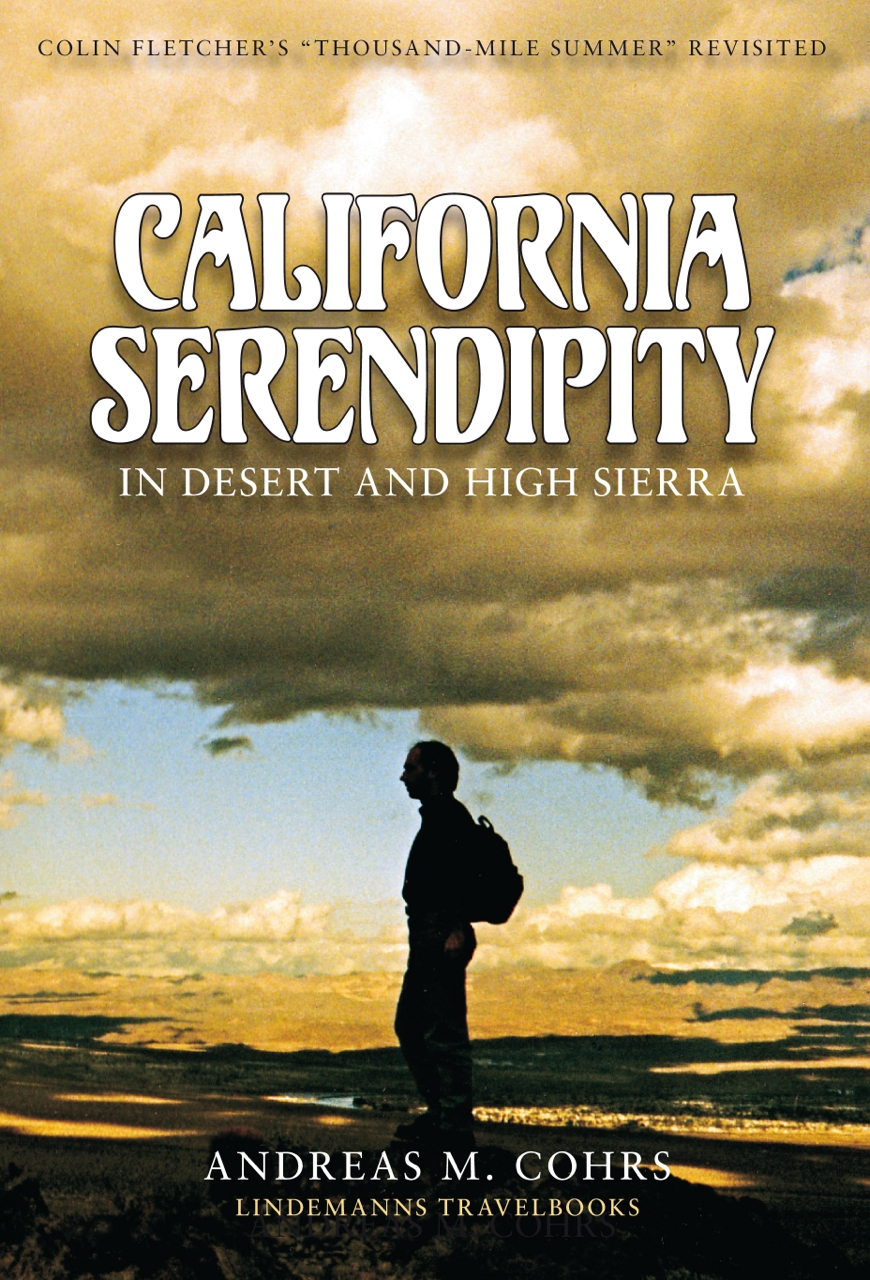 Though his name is little known in the thru-hiking community today, Colin Fletcher is one of backpacking’s true pioneers.

“Colin was sort of the founding father of modern backpacking, the first person to write about going out for an extended period and being self-sufficient,” Annette McGivney, author of the National Outdoor Book Award-winning Pure Land, about a murder in the Grand Canyon, said in the New York Times’ 2007 obituary for Fletcher.

If you’ve got an idea for a Great Strides feature, email [email protected].