Hiking the Colorado Trail: Segment 1 and 2

I am blessed to live within a 30-minute drive of the Colorado Trail.  One of the country’s premier long trails, stretching from Denver (technically, Littleton) to Durango, the Colorado Trail winds its way 486-miles from central to the southwestern corner of Colorado.

After a historically miserable May, I was jonsin’ to get out of my computer cave for a quick backpacking trip.  With my sights set on traversing the entirety of the Colorado Trail over the next year(ish), I let a 24-hour rain-free window be my cue to get started.  Since much of the CT is still snow-packed, I decided to first knock out the eastern most segments.

Here is a brief recap of these first two segments.

After taking an Uber to Waterton Canyon, the Colorado Trail’s eastern terminus, I was quickly dealt the trip’s first curveball in the form of a closed gate and giant sign informing me that Waterton Canyon was closed.  Luckily, I had begun the trip during normal business hours, and the sign included the Colorado Trail Foundation‘s phone number, which I called.  Bill Manning, the CTF’s Executive Director, answered and was very helpful (and friendly) in offering some alternative options, including the nearby Roxborough State Park, which was just a few-mile road walk away.

Because it was HAF (hot as…well you know), I never threw in the towel in attempting a hitch during this short(ish) walk. Even after completing 85% of this first stretch on foot, I still insisted on thumbing each passing car, when an older gentleman took me the remaining distance to the park’s entrance.  My luck continued as a park ranger pulled up as my hitch drove off and the ranger escorted me the final 2-miles to the park’s visitor center.

The first 90 minutes of the day went nothing like planned, which sadistically made me yearn for my thru-hiking days.

The ranger corroborated what Bill Manning had told me, I could connect to the Colorado Trail by hiking up and over Carpenter Peak, the park’s highest summit at just over 7,000 feet.  This detour ended up being a beautiful surprise- the trails were wonderfully maintained (that’s what a $7 entrance fee will get ya) and the climb up Carpenter offered gorgeous views of the red rocks along the foothills. 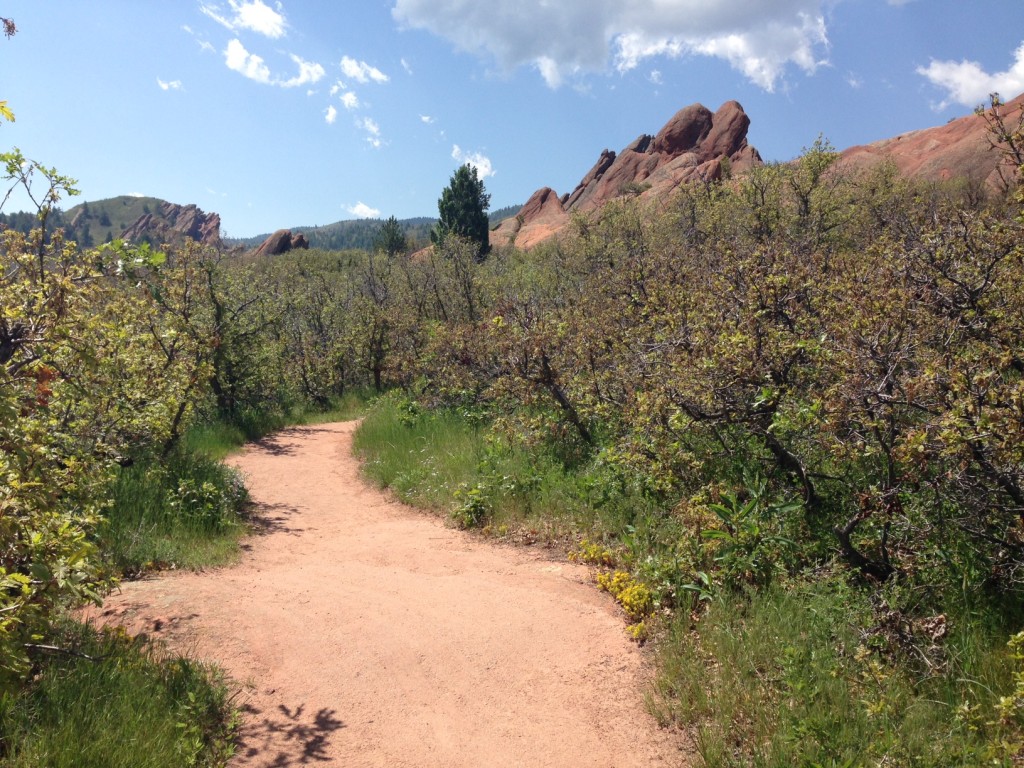 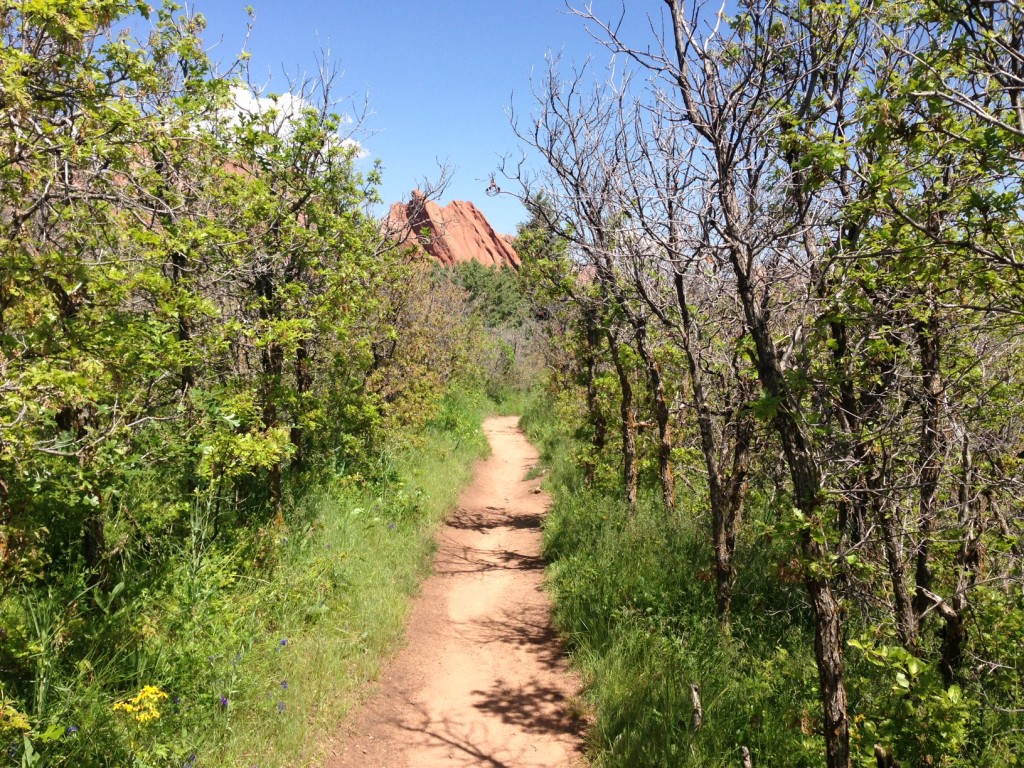 So nice, you could eat trail mix right off it. 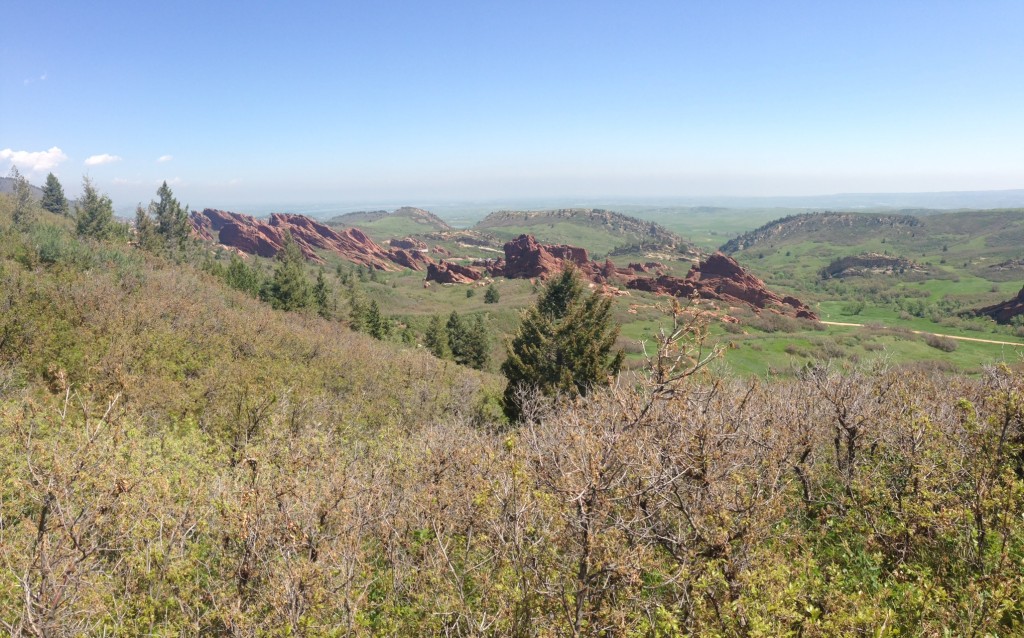 View from the climb up Carpenter Peak.

After climbing up and over Carpenter Peak, the ranger told me to simply follow signs to Waterton Canyon / the Colorado Trail and I would have no problem finding my way back onto the CT.  This was about 85% true as each fork offered signs indicating the way, save the last one.  As it turns out, the lone unmarked intersection was enough to send me wayward.  Because I usually hike with a GPS watch (the Garmin Fenix 3, highly recommended), I knew I should have hit the Colorado Trail at the 10 mile mark.  At 10.5 miles, still no sign of the CT, so I turned to 21st century SOS tactic #2: Guthook’s Colorado Trail App, which saved my ass.  The app clearly demonstrated that there was an entire ridge between me and where I was supposed to be.  I backtracked, took the other fork (it was in fact unmarked), and after 4.5 hours of hiking for the day, found the trail I had set out for. 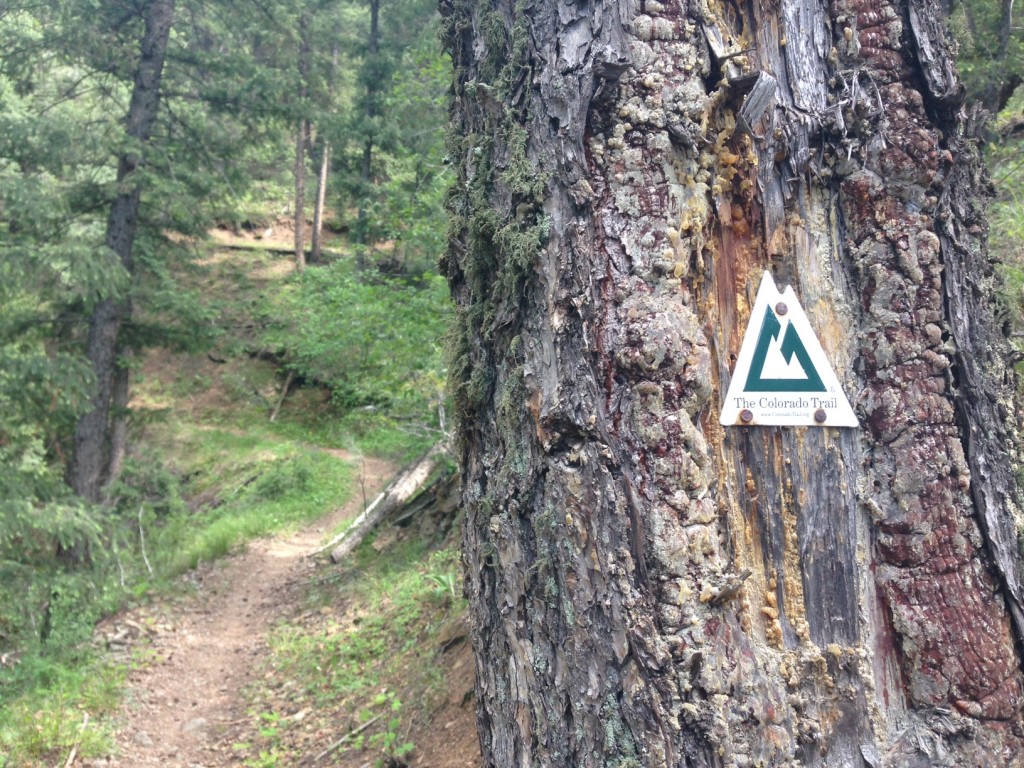 The remainder of the CT’s first segment was good hiking- well maintained trails, forgiving switchbacks, ample water- but not much in terms of views until I hit the high point on the western-facing ridge with an unoccupied campsite at the 17-mile mark (mile 14 of the CT).  The ultimate hiker jackpot.  I set up camp, took 1,397 pictures (with 0% doing any justice), cooked some dinner (Good To Go’s Thai Curry is currently by far and away my favorite dehydrated meal), soaked up the sunset and guzzled the much-too-small portion of red wine I had snagged off the kitchen counter seconds before leaving my apartment. 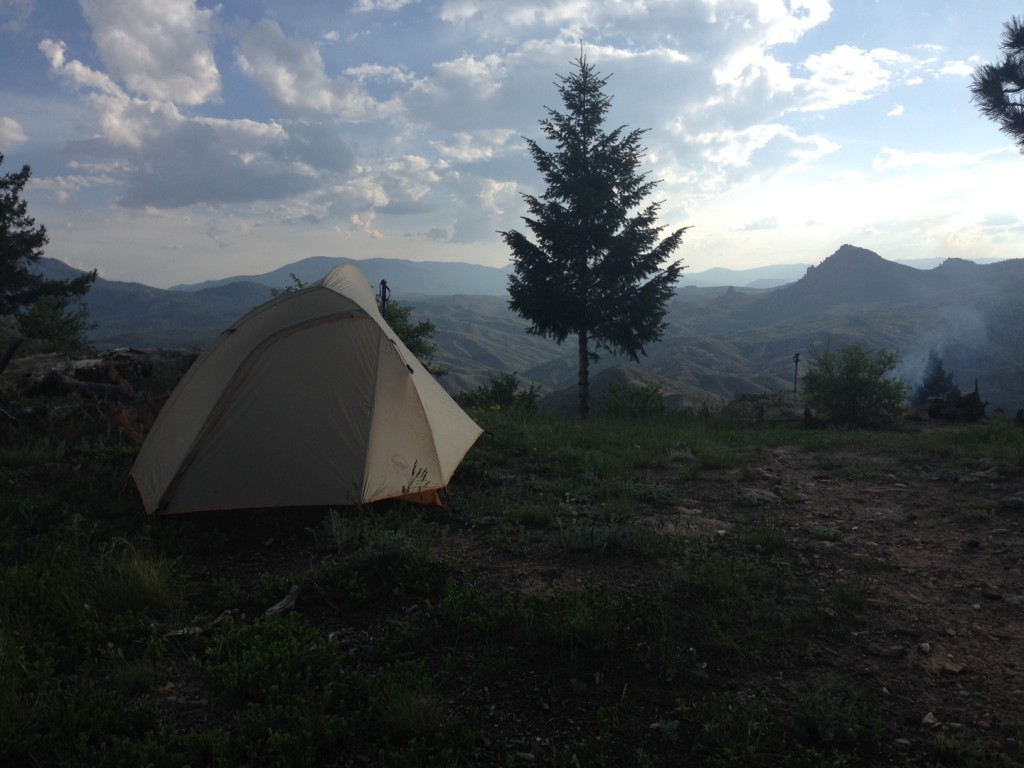 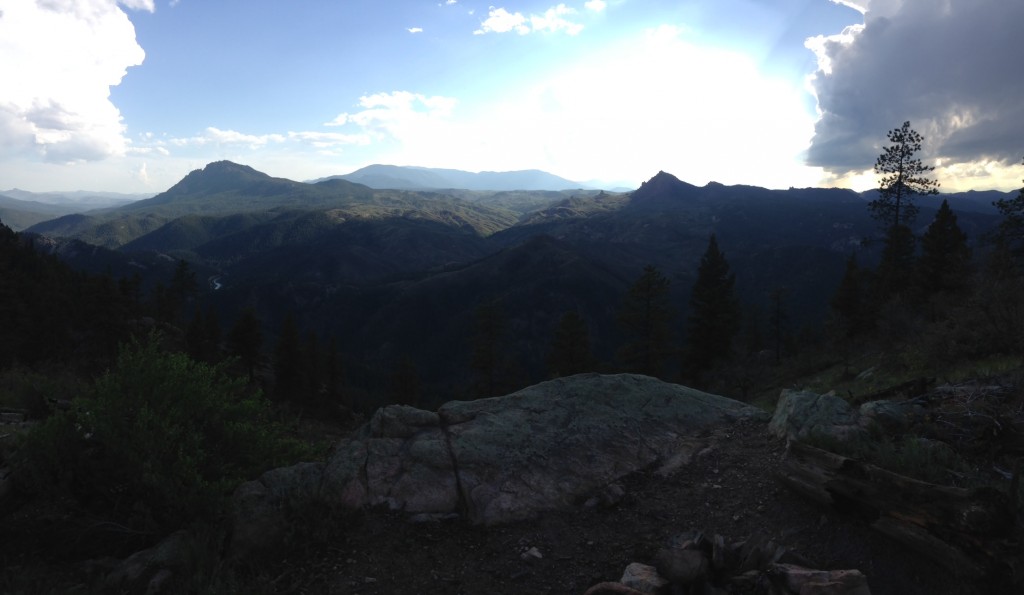 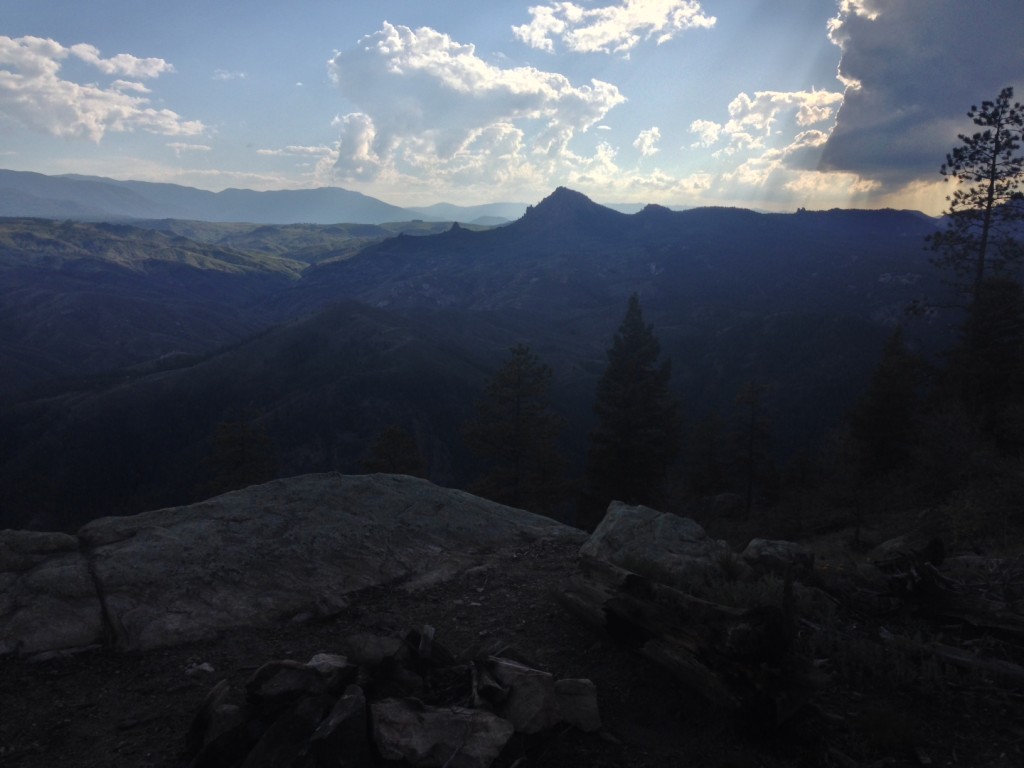 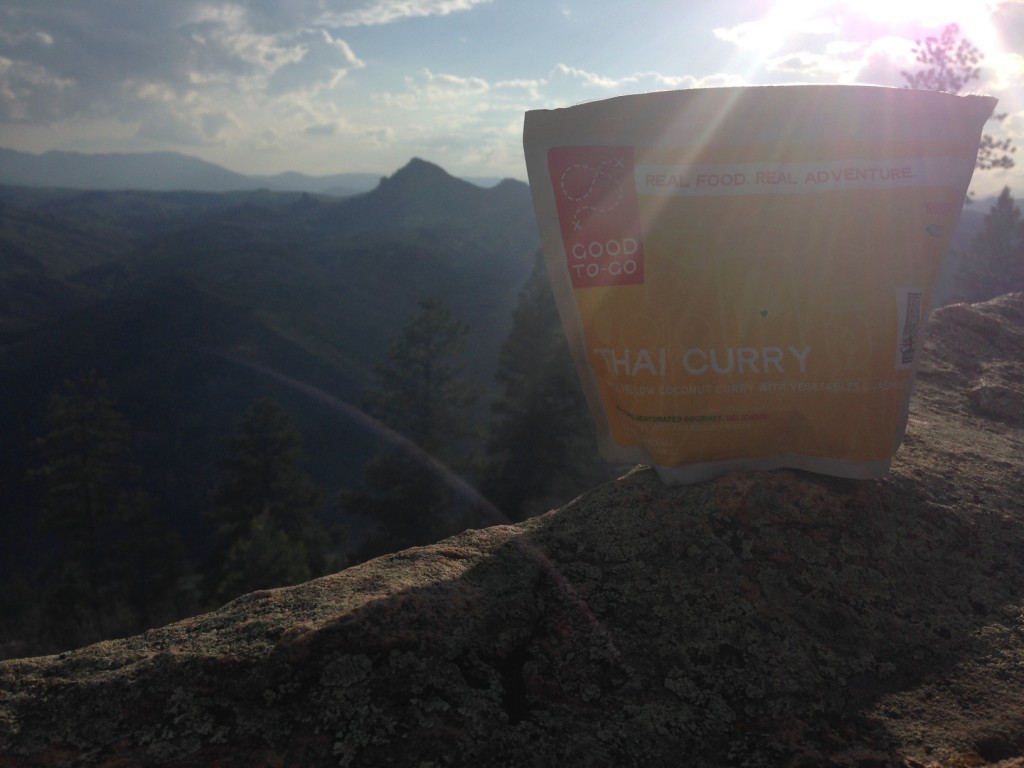 My lone beef with this meal, is the lack of beef (or meat in general aside from anchovies). Problem = solved with a heaping serving of summer sausage. 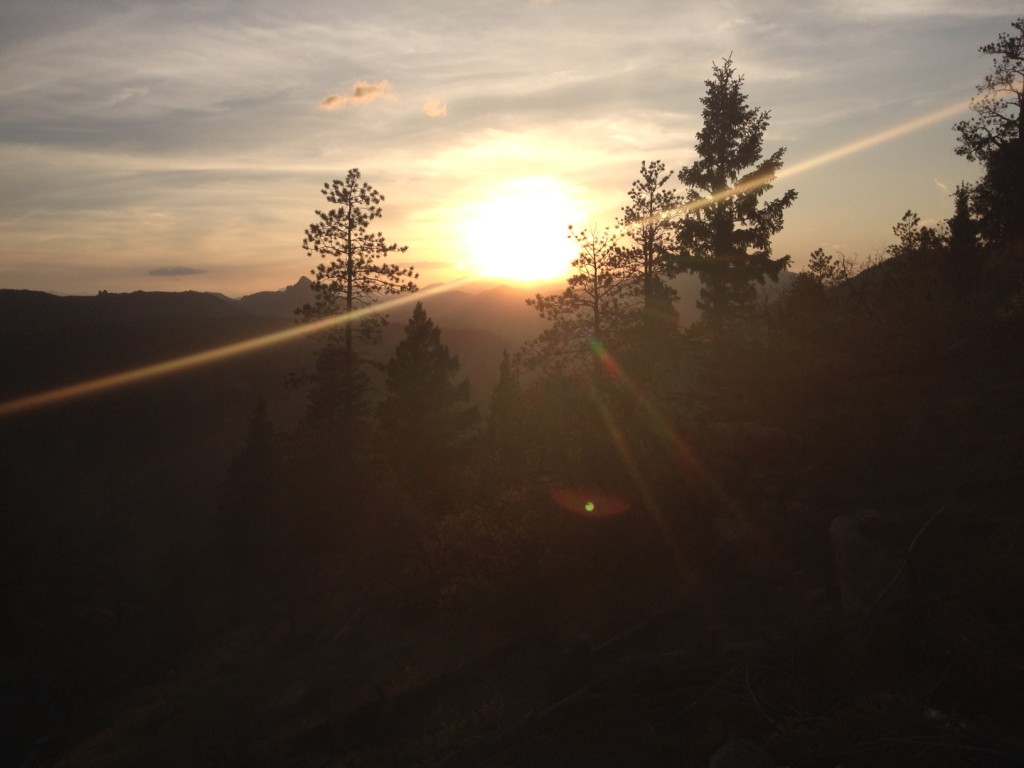 With any more wine in my system, I would have woken up thinking it was the Fourth of July.  The sky was one giant lightning show.  I would later find out that Denver and the foothills were getting absolutely pounded with a vicious and unforeseen hail storm.  Save a few brief sprinkles, it was dry at my campsite.  Win.

Today was the day I had assumed to face an onslaught of storms.  You know what they say about assuming, right?  “It’s a valuable tactic because it’s usually correct.”  And the old adage held true as I awoke to moderately bright skies to the north and west and absolute cloud terrorism to the south and east.

I knew I had a decent climb after coming out of the South Platte River, but was unsure about how exposed the terrain would be after I got there.  Knowing that mountain storms typically show preference toward the afternoon, I was ready to rock and on the trail by 8am, likely a new world record for a solo-Zach trip (I like to sleep in- sue me). 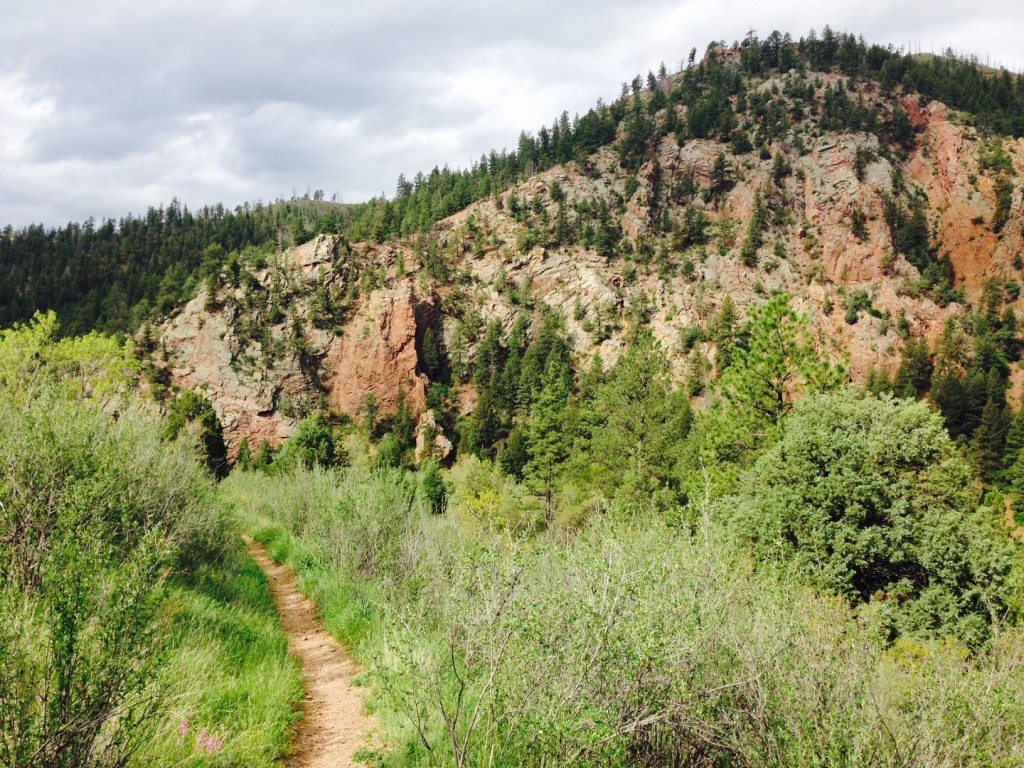 Descending toward the South Platte River 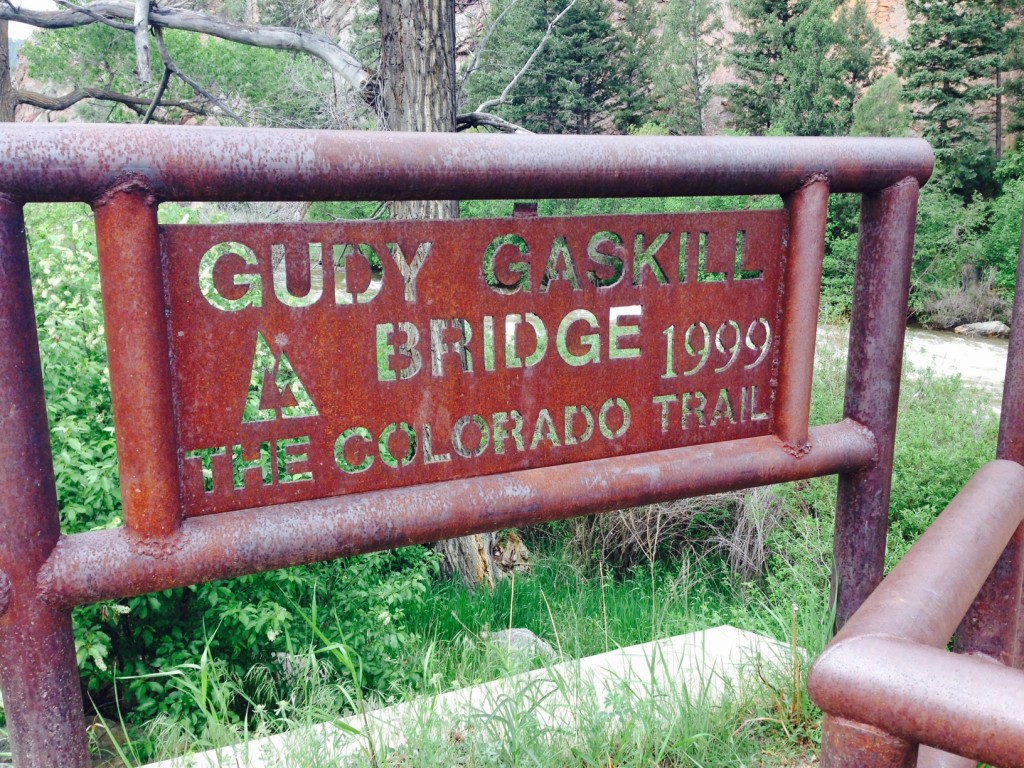 Gudy Gaskill is the reason the CT exists. Thanks Gudy. You are a renegade! 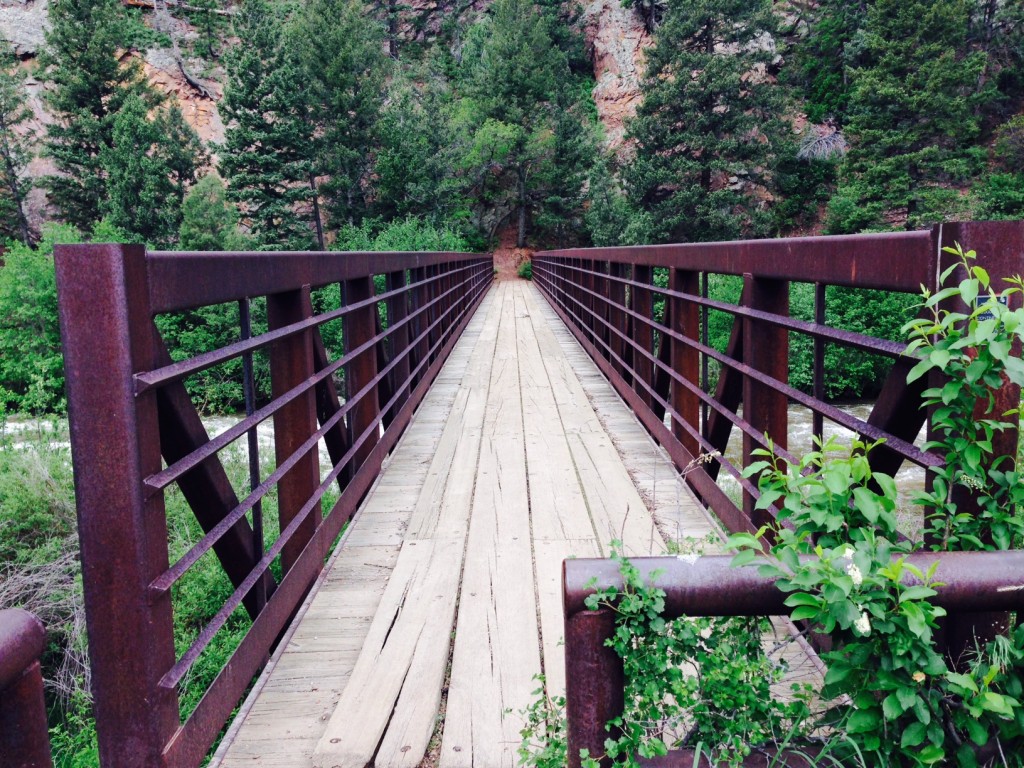 I was halfway into my climb when the first tangible sound of thunder rolled through.  A few minutes after reaching the ridge, the rain started to fall.  Question 1: how exposed is this ridge? Answer: Very.  Question 2: how fast am I about to start backpacking right now? Answer: see answer 1.

Despite the fact that this was a beautiful section, rolling terrain atop a ridge with 360 degree views, no pictures were taken, for reasons explained in the previous paragraph.

After a couple miles, I hit one of the segment’s few forest sections right as the storm started to get bad.  Even with the storm worsening, my heart rate dropped knowing I was no longer the tallest object.  Not too long after that, the sky opened up, and where the trail again let out into more forrest-less terrain (thanks to the human-induced Buffalo Creek Fire in 1996, which burned ~12,000 acres). 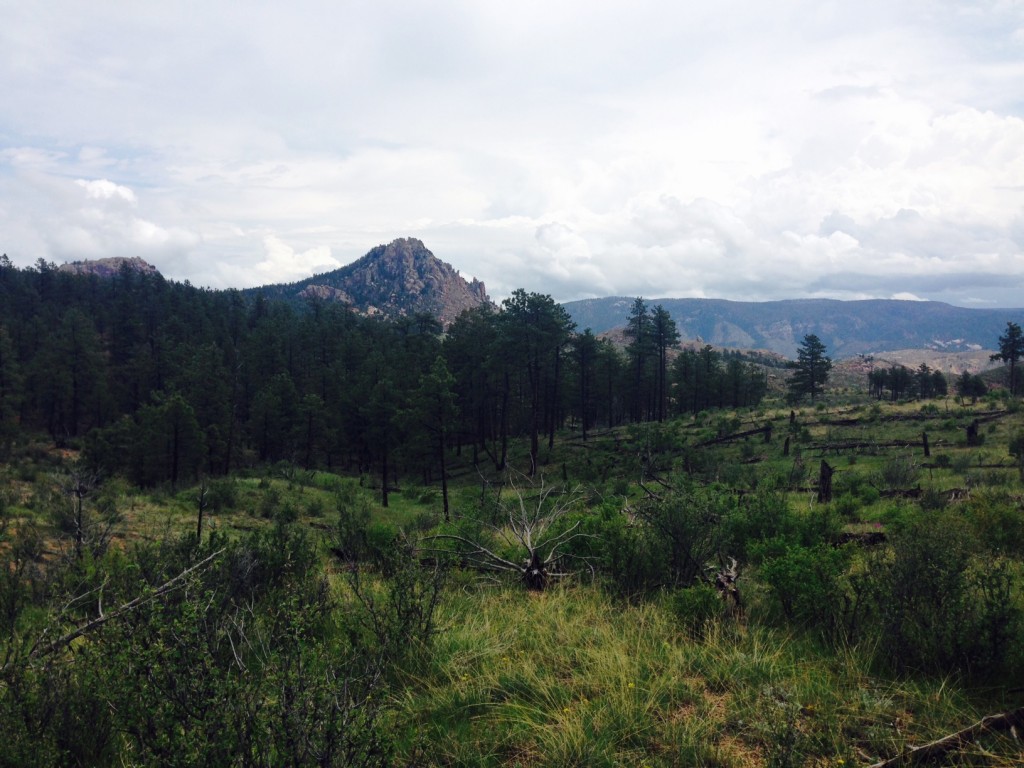 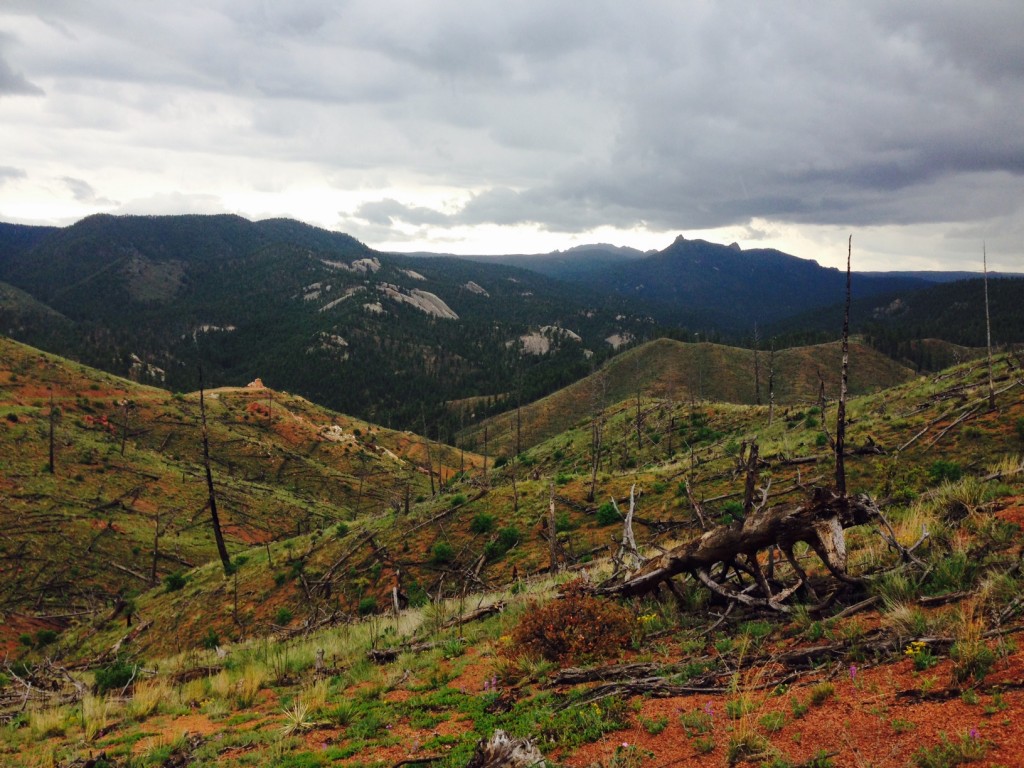 Final notes for the section, one good, one less than good especially if you’re a guy who’s contracted West Nile virus.

Good: The wildflowers. Out of control.

Bad: The mosquitoes are out. Already. Their peak season isn’t for another month, month and a half. Be afraid, be very afraid. 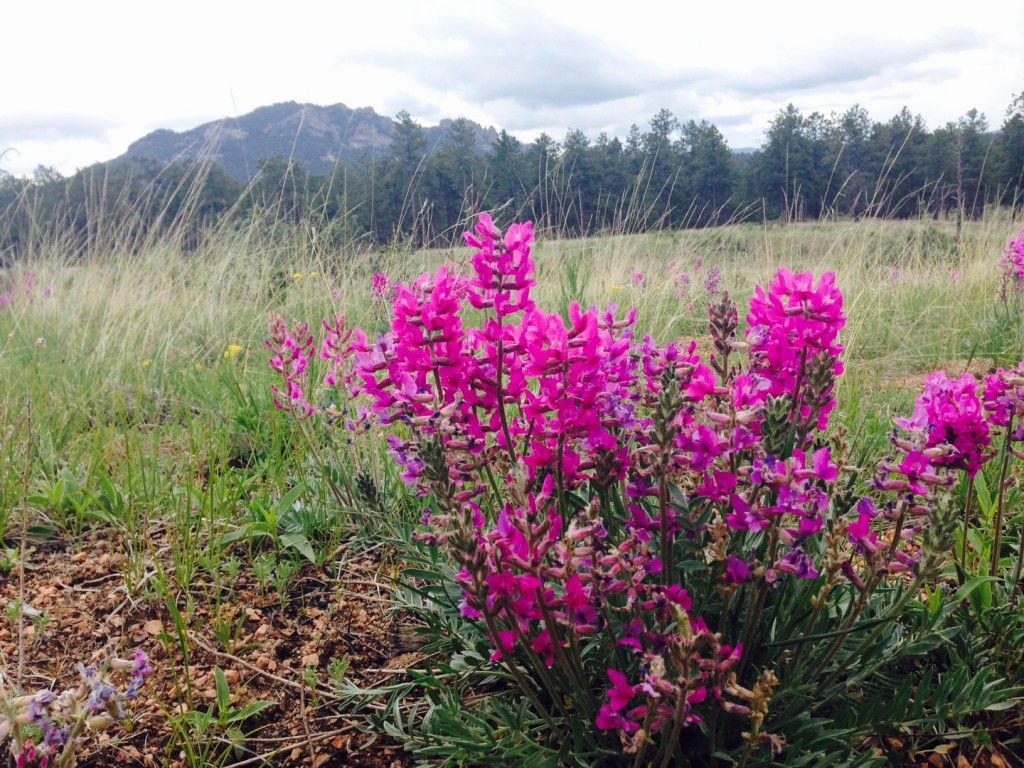 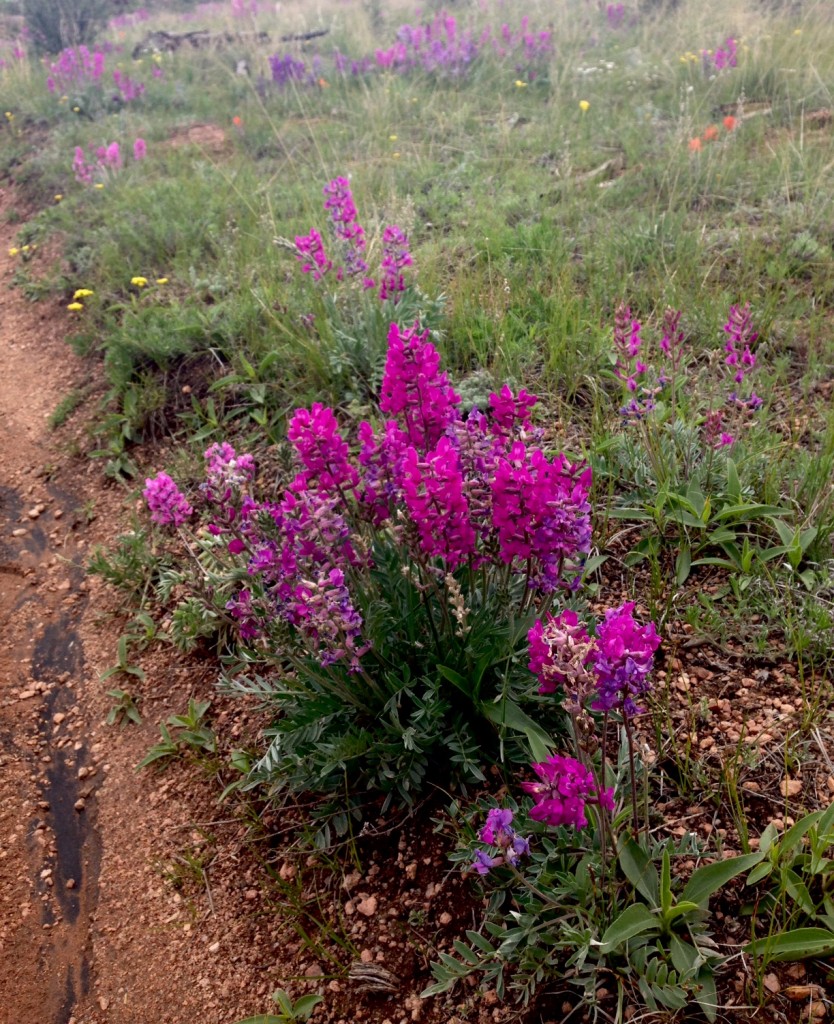 I contemplated doing an out and back beyond reaching my car at Little Scraggy Trailhead at the end of section two, but it had dawned on me that I did a little over 31 miles in less than a day and a half and that I’m in not-good shape.  So I will be saving segment three for an upcoming, not-defnitely-going-to-storm-spell. 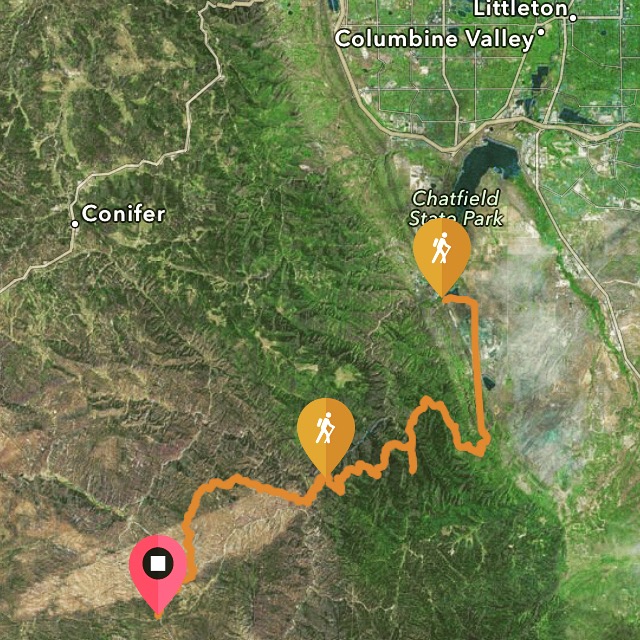 Taken with my Garmin Fenix 3.