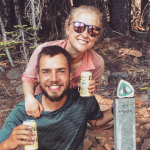 How Graphene Will Revolutionise Thru-Hiking

Every couple of years we get hype around a specific item or material that changes the game for thru hikers. Whether this be personal GPS devices allowing for navigation and rescue, Guthooks Guides in 2012, the Sawyer Squeeze, or more recently in 2016/2017 Cuben Fiber (now marketed as Dyneema), all these technological advancements fundamentally change the hiking game in terms of distance, speed, share-ability and do-ability of thru hiking.  It has enabled us hikers to be better equipped with up-to-date routes, water source information and allowed us to upgrade to lighter and more durable gear, eventually getting us further, faster.

A lot of this technology has made it easier for us to get out and stay outside for longer, but it has also increased the dependency we have on the batteries inside our phones, GPS devices, bluetooth headphones or cameras. Now a new material promises a change in the way we hike; Graphene.

First discovered in 2004 this material is more than a decade old but for a long time its applications stayed in the laboratory. Graphene is a hexagonal structure on a 2D singular atomic plane of a commonly found material: Graphite – the stuff you find in pencils. Now, we’re not going to go into detail on its composition, history and creation at risk of losing folks, but what is important is what that means for us hikers. Graphene has some really unique properties including great thermal and electrical conductivity.  It’s elastic, high strength and low weight.

A quick google search for what Graphene is delivers a long list of near-impossible traits which make the material seem paranormal. Graphene is hailed as the ‘thinnest, lightest and strongest material’ to be produced and the strongest material ever tested.  To illustrate this, in a paper featured in Science put this into context by stating that a 1 square meter graphene hammock would support a 4 kg cat but would weigh only as much as one of the cat’s whiskers. (Lee, Changgu (2008). To put it another way, if you used graphene instead of steel for the cables of the Golden Gate Bridge, the cables would only have to be 0.2 square inches thick – that’s 12,000 times thinner than those used! (Source)

Whilst a lot of the applications and promises of Graphene have stayed as theories for a long time, we’re entering a time where some of that is starting to come to fruition – having the potential to fundamentally change how we hike.

Due to its strength, Graphene strengthened materials have the potential to seriously lighten the load of our packs. Graphene is already being used in the aeronautical field to create lighter and stronger aircraft (Source). As with most technology, it is tested and used in higher cost environments like the military, motor racing or aerospace before it becomes cheap enough for the average consumer. What’s interesting is we’re now seeing helmets, tennis rackets, lacrosse gear, skiis and more starting to use the technology to produce higher quality gear.

In the hiking community, framed bags could become stronger yet lighter, reducing the weight penalty that the comfort a framed bag provides. Clothing and bear bags like the ursak could also employ a Graphene strengthened material for improved strength, waterproofness and durability whilst becoming lighter than today’s options.

It is well documented that Zach, our hiker in command, is no fan of mosquitoes or DEET. In 2019 the National Institute of Health published research by Brown University indicating that ‘graphene could provide alternative to chemicals in insect repellant and protective clothing.’ (Source) You’d effectively spray yourself with a film like coating that would make it impossible for a mosquito to bite though. No more feeling like ‘a bag of dicks’!

Whilst water filters are pretty good already, Australian researchers have looked at how to improve water filtration technology through Graphene. ‘The system employs a film made from a thin layer of Graphene, called Graphair, which allows water to pass through microscopic nanochannels in its surface while stopping pollutants with larger molecules’ (Source).  This has the potential to be much thinner and lighter than the Sawyer Squeeze, a staple of many thru hikers’ kit lists.

Batteries are probably the most mature part of graphene application. In fact you can buy a battery today which promises charging speeds up to 6X that of the hiker stable, the Anker PowerCore. That equates to 6 full phone charges in just 1.5 hours. These are hybrid batteries that use the stability of Graphene to improve Lithium-ion batteries to charge faster. We’re still a few years off consumer full Graphene batteries.

Whilst all Graphene batteries we’ve seen on the marketare currently heavier than the traditional Lithium-ion equivalents, RealGraphene has confirmed to TheTrek that it is working on a rugged outdoors version that is lighter and will be out later this year. We’ve been told that TheTrek will get a review product so we’ll let you know how we get on with this.

What do Graphene batteries mean for a long distance thru hike?

There are a couple of changes we could see when Graphene batteries take off:

Closing Thoughts – Should I buy into the Graphene hype today?

Short answer: no. There isn’t anything on the market that lives up to the promise of the material in the thru hiker community. Currently available batteries carry a significant weight penalty, are more expensive and don’t have a season of hiking under their belt to prove their reliability. There is a lot of promise about graphene and our bet is by 2021 we’ll see some viable Graphene alternatives to our hiking staples start to appear in our gear lists. We’re currently in a similar phase of the first iPhone, iPad or handheld GPS device – expensive and unwieldy. Yet, after a few seasons of refinement Graphene promises to transform the way we hike similar to how it is already shaping other industries

Here at The Trek we’ll keep you updated by reviewing Graphene products in the future.