Signs at the entrance led me through hallway after hallway of artist’s studios, diners, and fabric-strewn shops. A door opened into the sunlight and an ancient alley, moss growing down the edges of brick arches, paper signs that directed me up new wood stairs to a fire door. I was anticipating David Bowie and a host of puppets when I turned the corner to my destination: Hyperlite Mountain Gear.

Finding Hyperlite Mountain Gear, if you’ve never been to the monolithic Pepperell mills in Biddeford, Maine, requires some navigational skill. Which is an appropriate test if you’re a serious enough backpacker that you ask not how many ounces, but how many grams, are in your gear.

“This right here is our shelter line it’s just cranking all day,” says digital media manager Sam Peters as he shows me around the production center. All tents, packs, as stuff sacks are made right in house at Hyperlite Mountain Gear’s headquarters, which makes entering the warehouse a real experience. Cantina music meets an industrial cacophony – and Dyneema Composite Fabric (formerly Cuben Fiber) is everywhere. It’s being stitched together with commercial sewing machines, it’s being punctured by awls, it’s being folded up into tight little rolls – and it’s all being done by hand. Everywhere I look, someone is manipulating this near-magical fabric that has revolutionized an industry. 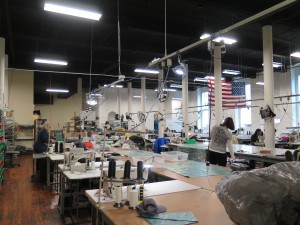 “Everything is hand sewn, hand taped.” Sam explains. “The fabric is something that a lot of people have never seen before, never mind sewed with.” The Dyneema Composite Fiber that Hyperlite Mountain Gear uses weighs .74 ounce per square yard. “There’s a lot of companies using even lighter versions.” Sam says. “We’ve found they don’t hold up… they weigh a little less but you’re trading off for durability.” 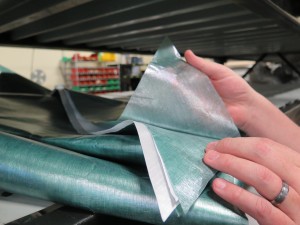 Hyperlite Mountain Gear makes stuff sacks, shelters, and the Stuff Pack out of their raw Dyneema, but their packs are made from polyester laminated to cuben fiber to waterproof the bags and add durability. Bigger packs use a heavier denier polyester, but recently Hyperlite Mountain Gear added a new fabric to the mix: fully woven Dyneema. “A lot of our ambassadors like it because they’re out there guiding, they’re out there for weeks at a time rock climbing.” Sam explains. “This stuff is just bomb proof stuff.” 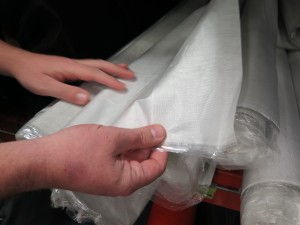 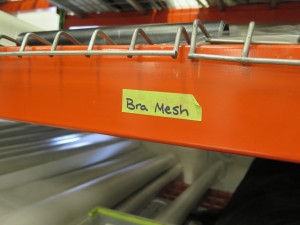 “Mike, mostly – our senior ambassador – Is where we get suggestions for products.” He’s currently on the second leg of a three-part thru-hike around the rim of the Grand Canyon. “He comes back with all kinds of things that we could maybe do.”

Mike St. Pierre is the company’s founder, CEO, co-owner, and chief creator. He started making gear back in 2009, before the ultralight revolution had really taken off. “He was looking for ultralight gear and couldn’t find it so just started making his own.” 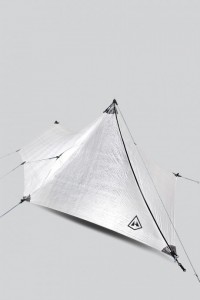 The St. Pierre brothers have created ultralight gear such as the 11 ounce Echo II shelter.

One of those ideas was Hyperlite Mountain Gear’s new ‘pack pods’, designed to keep stuff organized in your bag, according to Sam. “They’re designed for our packs but they’ll work with any pack.” At roughly 4 ounces, they’re comparable in weight to a stuff sack while allowing, for instance, Mike to stack food as he needed it for his hike around the Grand Canyon’s rim. 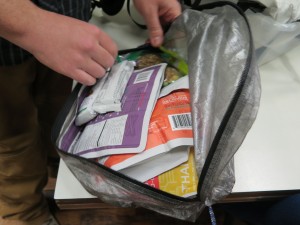 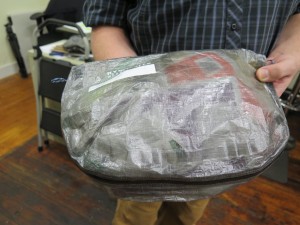 Many gear companies have a top-down approach where they create a new product, create copies, and test it under controlled settings before releasing it at large and using customer reviews to adapt their next version. Hyperlite Mountain Gear takes a bottom-up approach. They take suggestions or even in-field adjustments that their ambassadors make, create prototypes, and send them right back out into the field for testing with only a handful of people who work and play hard.

“The ambassador program is something we’ve had since the beginning.” Sam says, referring to the 27 athletes who currently test out Hyperlite Mountain Gear’s creations. “When Mike first started making packs he just sent a few out to a couple guys and one pack leap-frogged up the AT for the whole first year.” 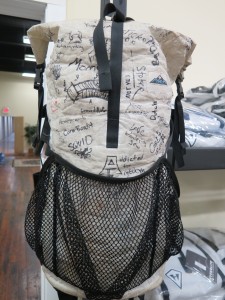 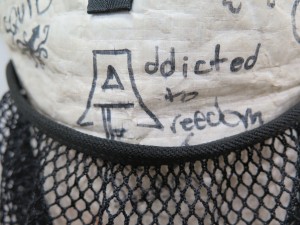 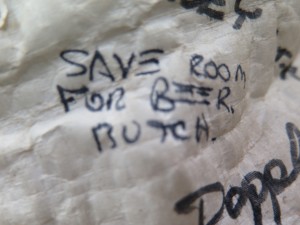 In an industry that’s being revolutionized by tiny companies like Hyperlite Mountain Gear, smaller is often better. “Part of the advantage I guess we have over a lot of the other bigger guys is that we make it here, so if we want to change something, we can do that right away; We don’t have to wait for factory over seas to change it and send it in a shipment.”

Hyperlite Mountain Gear has come a long way. Currently, they have around 20 people on the manufacturing side and 8 on the office side, but very recently they were making all their gear with about four people.

“Until I came on board last year it was just the two owners,” explains Sam. “They were answering emails and phone calls – actually one of the owners has been back here helping ship stuff today.” Dan St. Pierre, the CFO of Hyperlite Mountain Gear and Mike’s brother, is busy at work in jeans and a hoodie.

Over the next year Hyperlite Mountain Gear will be moving up a floor to expand their space, but they won’t be leaving Biddeford. “I know Mike and Dan, the owners, are pretty psyched to keep everything in the community.” 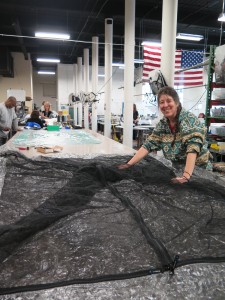 Linda working on a tent.

And they know how to keep it in the community. According to Hyperlite Mountain Gear’s website, “Maine is filled with the mountains, forests, trails and rivers that initially formed our passion for the outdoors. It’s the kind of place that inspired us to found this company… the kind of place that now serves as our local test lab.” That risk-taking, regional loyalty is the Mainer quality responsible for pulling Biddeford out of a recession. Companies like Hyperlite Mountain Gear springing up in the 180 year-old Pepperell Mills are helping to revitalize an economy that was previously on the rocks (according to the Globe). Plus, it’s a fun environment to work in, says Sam.  “No one wants to come to work and be bored and I don’t think anyone here has that.” 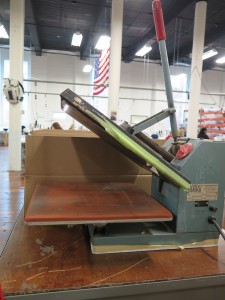 Revitalizing a mill building can also lead to free stuff, such as this ancient heat press that Hyperlite Mountain Gear has actually used to seal stuff sacks. 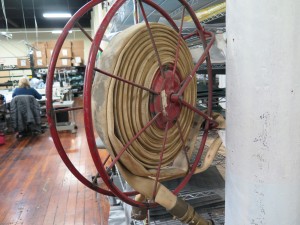 Not to mention this state of the line fire suppression system.

Hyperlite Mountain Gear is starting to get some recognition that goes beyond their local community. “Kokatat does an American Made Outdoor Gear award every year at OR and we were the lucky recipient this year.” Of course, last year the award went to Sterling Rope, which is also from Biddeford, because Maine seems to know what it’s doing when it comes to great gear. “It’s good to get the recognition from the industry.   We historically haven’t had a booth at the OR show and it’s fun to go out there and realize people are noticing.” 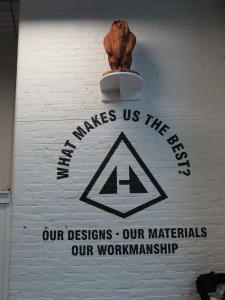 Hyperlite Mountain Gear believes that durable and minimal should go hand-in-hand – and that if they do, you won’t need another backpack for your second sport.   “A lot of our thru-hiking packs, people are skiing with them, people are bringing them out on desert climbing trips.” It’s a beautiful concept, really: One pack, many activities.

There’s a strong contingency of multi-sport enthusiasts like pack rafters, cyclists, and ice-climbers now looking to Hyperlite Mountain Gear as they expand their concepts, but thru-hikers are still their main demographic. “They’re how we got here and definitely how the name got out there.”

In fact, prior to last year the company did almost no marketing outside of word-of-mouth generated by their ambassador program and Trail Days, where they have their booth every year. “I was blown away by just the wide range of people there, we met everybody from every walk of life – literally walking through town.” 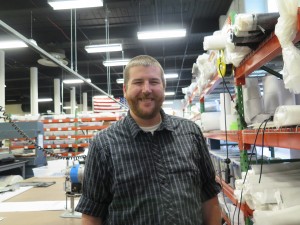 The company resonates so strongly with thru-hikers because Hyperlite Mountain Gear’s philosophy is one a hiker can relate to: “We make gear that works, without the fancy extra buckles and zippers.” 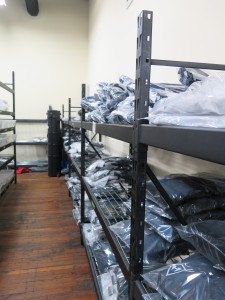 And their distinct look sells. “People just see white packs out there and start talking.” Laughing, Sam says, “Lots of guys love the white because it gets dirty and they feel like they own the dirt – It’s a badge of honor.”

Hyperlite Mountain Gear recently changed their logo from a mountain cutout to a simple H in a shield. It’s a look with hard edges and clear design, and it spares all the frills. Looking at the renovated mill, the Maine locals still climbing out of a recession, the cuben fiber which appears to every non-hiker in the world to be a trash bag… the logo seems to fit. “We’re trying to drive home the point that less is more and you don’t need all this extra stuff.” 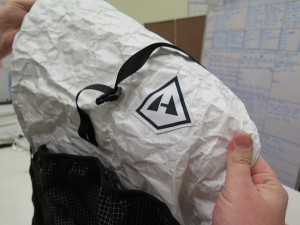 Because that’s who Hyperlite Mountain Gear is. They’re the dirtbag who turns a hostel into an office, who rigs up a hammock on a bald, who creates a perfect stove out of a beer can and cooks pasta sides at 10,000 feet. Hyperlite Mountain Gear doesn’t need fancy offices or hundreds of employees or even a heat sealer from this century to create some of the best products on the market. They just need a scale.