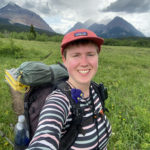 I bailed out on the PNT.

This is not the update I was hoping to write. By now I would have been already two weeks on the Pacific Northwest Trail. As you can read from the title though, this is sadly not the case. But before we dig into what happened, I wanna start where I have left off in the last post.

There are a few resupply strategies that you can choose from. I always like to buy my food in local stores (support local businesses) and only send boxes where I absolutely have to. So was it also this time. I prepared only 3 boxes for the 1200-mile-long trail. My boxes went to Polebridge (which is the first resupply point), Yaak, and Ross Lake Resort. I would say Ross Lake Resort is the only place you really have to send a box because it’s a Resort with no shop at all.

How I got to the trailhead

Long story short, I was road tripping up to Montana with a friend who I know from back home in Switzerland. We drove from Denver, CO up to Glacier National Park in about 1.5 weeks. It was a blast! She dropped me off at Chief Mountain, the eastern Terminus of the PNT. It felt pretty cool (and kinda weird) to have my personal shuttle. Especially from a person who I know from back home. Thanks again, Anja!

Chief Mountain, where it all began.

I started on July 6 around noon. After a short Goodbye to my friend, filming my intro (for my YT), I was off into the woods. It felt surreal to be there and finally start this hike. The situation with the snow concerned me but I was hoping to meet up with other hikers. Furthermore, the grizzly bear situation freaked me out even more.

The trail went through the forest downhill the first few miles. Unfortunately, the mosquitos were out already! I probably yelled every two minutes or so ‘hey bear’ because I was mortified. My bear spray was hanging next to my fanny pack, so perfectly in reach for me. About half an hour into my hike I met a ranger and she checked my permit. She also told me about the snow conditions and that about 50 percent of the people turn around. Hmm, that was not what I wanted to hear. I tried to stay positive and hiked on.

I came upon wide meadows with the first great view of the mountains! I was literally just standing there with my mouth wide open. This is so damn beautiful!! It was raining in the mountains but the sun still came through a little bit. Just a magical mood. I think it was even better that just having blue sky. Then I crossed over the super cool suspension bridge, that I have seen many pictures of. It was very wobbly and therefore I went super slowly. Shortly after I saw my first bear grass along the trail. For me, that’s like THE flower that represents Glacier National Park. I’ve seen so many pictures with bear grass, a blue lake and the sheer mountains behind it. I’m walking in a postcard! It still felt surreal to be honest.

Lots of people came the opposite direction. What intimidated me though, that there were all at least two people or more. So nobody was by herself like I was. Another aspect that made me doubt myself and my plans. The trail went mostly through the forest and sometimes you got a glimpse to the river or the lake. I arrived around 5.30 pm at my campsite. They even have a little map for it, how luxurious 😂. I was so glad to see two other Ursacks hang on the bear pole. I was honestly surprised that there was only one other tent. Isn’t Glacier NP supposed to be super busy and popular in the summer?! I guess not when I was.

I was eaten alive at my campsite from the moment I arrived until the moment I went into my tent. I was an AYCE Buffet for them. I had never seen so many mosquitos before and they drove me crazy. First things first, I hang my food. I’ve never done a bear hang before, so throwing my bear line over that pole was let’s say interesting. It took some time as you can imagine. Next thing, I set up my tent. It has been some weeks since the last time I pitched it (actually on the AT). Therefore it looked all floppy in the beginning and I had so rearrange the stakes. It’s still kind of a new tent to me and it definitely still needs more practice in pitching it.

My neighbors for the night were already in their tent. I walked over to ask them if they perhaps go over Stoney Indian Pass the next day. The answer was no and I was realising that it’s probably gonna be only me. That lead to my first meltdown. I really thought there gonna be more hiker out there starting the PNT or the CDT. But I guess, I was just unlucky that nobody started the same day as I did. Worried for the next day, I went to sleep.

I woke up before my alarm went off and enjoyed the last minutes in my warm, cozy quilt. As I always do first, I went to pee real quick. Then I packed everything, set my tent down and walked over to the food prep area. My neighbors turned out to be a couple from Colorado. We were having breakfast together and were chatting about our trips. I was thankful to have people around. We both left at the same time but in the opposite direction. The weather was okay. I woke up to blue sky but it changed quickly to overcast. There was also a severe thunderstorm warning for today’s afternoon.

The trail was mostly covered in waist high brushes and went through the dense forest. I was yelling and clapping a lot (because of the grizzlies). If someone would have seen me, it would have been for sure quite the show. There was lots of beargrass along the trail. What a beautiful walk! When I arrived at another campsite, people were just about to leave. I was hoping they’re going my way but sadly they didn’t. There were quite a few bridges over some nice creeks. About two hours into the day the ascent for the pass started. It was a gentle climb with gorgeous views to the mountains! When I got out of the trees it got steeper and I saw the first snow patch. I got higher and higher with every switchback until I was standing before the snowfield. It started to rain so I put my rain jacket on.

I was miserable. It was raining, cold and I was asking myself ‘what the heck am I doing here?!’. Nobody was in sight which freaked me out. The snowfield was pretty steep. I started crying immediately. I think it was a mix of a lot of emotions. I waited so long to start this hike and now it wasn’t how I was expecting it to be. My mind went crazy with what could happen if I go on. And also, I was thinking about that thunderstorm warning. What if I go on and a storm catches me on the pass. I was panicking and I couldn’t stop sobbing. I kew I had to make a decision but I just didn’t know what to do. It was probably one of the hardest decisions I have ever had to make.

Let’s cut to the chase, I turned around. I wasn‘t comfortable doing it by myself and thought it‘s for the better to turn around. Maybe I wasn’t the badass hiker I wanted to be but I also don’t have to prove myself to anyone. The decision felt good but at the same time I was heartbroken. I had no clue what I wanted to do after hiking out of Glacier. I crossed many people on my way back and told them what happened. Of course the weather turned great about an hour later. The decision was made though, so there was no going back and it would be too late anyways.

Back to the same campsite as I stayed the night before I set up my tent and had a nap. I was messaging with friends via my Garmin inReach mini. It‘s a great device to have in such kind of situations. Technically I was not allowed to stay in that campsite because I didn‘t have a permit for the night. But honestly that was my smallest concern for that night. A guy that I crossed on my way back also stayed in the same campsite. He told me, that he went up the pass and it was fine for him. It was then, when I felt like a complete idiot. I guess, good for him. He was offering me to drive me to St. Mary the next day as he had his rental car at Chief Mountain.

Unsure what to do next, I wrote my friend Anja who dropped me off to pick me up again. I wasn‘t sure if I even wanted to do the PNT anymore. Somehow it wasn‘t so important anymore. So the next day we hiked the 10 miles back together (the guy and I). I was so glad to see my friend Anja and the two little dogs she has. I needed some distance from the trail right then to think about what was next.

A few days after the decision was made, I am jumping to the Colorado Trail. This is actually where I‘m writing this from!