There were a lot of interesting stories being told as I lay awake in the tent, unsuccessful in my attempts to get some rest before our 2am night hike. Many of these hikers are fishermen/women who traded their fishing poles for hiking sticks. I’m sure most of the stories started with some truth, but the oneupmanship was so incredible that by the end of each story there would be a person carrying 40lbs of camera gear, in addition to all their normal gear, and doing consecutive 40-mile days with no problems.

I am also starting to understand more meanings of the phrase, “hike your own hike.” Many people are not “hiking” the trail as they say they are. Anyone who has read this knows my opinion on hiking how you want to, or “smashing goblins”. What I am finding is that people are hiking their own hikes in a lot of cool and different non-traditional ways, but have a difficult time being honest about the details because they break from the socially accepted norms.

Instead of telling a story about hopping from section to section, I heard a hiker say they hiked something like 700 miles in a short period of time, accepting all of the compliments from their audience. Later this same evening, a friend who they have been hiking with mentions details of skipping over 200 miles for various reasons. People want so badly to be accepted for hiking accolades, that they leave out details? That’s my best guess.

There is also a microcategory of people hanging out at trail towns without actually hiking much. They get on trail with people, fall behind and catch a hitch up to meet back up with their group. I’m not sure if there is a name for this in the hiking world, and I’m not judging because – have fun however works for you, but it’s also kind of paradoxical in that they are also ashamed to admit it. It might be that some people want very badly to be a part of the trail community but cannot physically, financially, or mentally actually hike the miles. Ironically, these have been some of my favorite people to speak with in the town stops. They have a lot of information and go the extra mile to engage me in conversation.

Since we were set up in the middle of about a hundred other hikers, the 2am alarm on my phone was set to vibrate only. Even though the phone slept with me in my sleeping bag, the vibration did not wake me until about 2:30am. Last night was a new moon with no natural light, which made breaking down camp in silence even more of a challenge. Some neighbors may have heard some rustling, but I think we did an awesome job – did not speak a word to each other or shine any lights.

Brianna and I’s long day of hiking officially began at 4am. With 20.7 miles between Mazama and our next available water source, our goal was to make all of those miles before 1pm. It wasn’t just the ongoing heatwave that drove us to this extreme plan, there is also a long exposed burn area in the middle of the long water carry. Additionally, making it 20.7 miles to water at Honeymoon Creek by 1pm would also mean we could relax for 4-5 hours and still get another 6 miles done before calling it a day.

The pitch black night/morning portion of our hike went very well. I lead the way with my white light and Brianna followed behind with her red light. My biggest concern over those first 2 hours was trying not to step on toads; no clue how many amphibians were killed in the making of this post.

Our pace for the day was good and everything was going well, for the most part. As the sun got higher and our breaks became more frequent, the lack of sleep and the absence of proper nutrition began to take a toll on us. We skipped breakfast with the intention of making it up on trail and that never happened. We were snacking hard, but it wasn’t enough. By the end of the day, Brianna was falling asleep for most, if not all, of our 20-minute breaks. 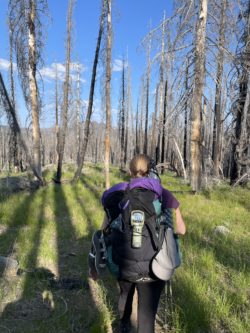 Making it to Honeymoon Creek was a dream come true. It’s just a couple of ponds flowing into a stream with some shady spots, but heaven looks different for everyone I suppose. We had great conversations with a few different hikers passing through, my favorite being Early Riser. She and I spoke to each other from our shaded hiding holes like two squirrels squeaking at one another from different trees. It’s not that she was an Ohio girl with a Colorado backstory and we are a Michigan couple with a Colorado backstory, it’s just hard not to love someone with the positive energy she was putting out into the world.

The last leg of our day was only 6 miles, but it was a doozy of a 6 miles up Devil’s Peak. If any other Southbound hikers are reading this, the climb is significantly harder for us than it is for Northbounders. Hiking Rule #73 – Do not believe trail incline/decline information given to you by someone hiking from the opposite direction. We passed a Northbound hiker who said the hike was “gradual and easy.” Yeah, gradual for you, steep as fuck for us.

It took us a bit longer than we thought, with the terrain full of slippery sheet rocks, but we did eventually make it to the top of the trail. The 7,000+ feet of elevation gave us a perfect view of helicopters we had been hearing all day long. They were grabbing water from a nearby lake to assist with a fire near Eagle Point. 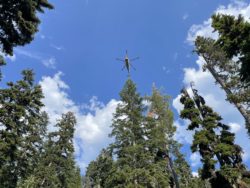 Not long after reaching the south side of Devil’s Peak, Brianna said to me, “I see smoke!” Sure enough, a stream of white smoke was rising out of a crop of trees to the southwest of Devil’s Peak, an area that was 10 miles off trail and a couple thousand feet lower in elevation. Maybe it was nothing? Maybe it was a forest fire? By the grace of luck, my phone found a couple bars of signal when I exited it from airplane mode. I called 911 and told them what I saw. The dispatcher pinged the position of my phone and reported it over to the Fire Departments for investigation. Not sure what happened from this point, might be that we helped save the PCT section? Or maybe it was nothing.

Reaching our home for the night at Snow Lake was emotional. There was a group of 4 tents taking up the prime camping real estate at the time we arrived, forcing us to find an alternative spot to rest our heads. The 16-hour 27-mile day of heat and steep climbs came to an end just minutes before sunset. 27 miles is not much compared to those doing 30-40 a day, but it’s the best day Brianna and I have had on the PCT so far.

We have a couple bars of cellular service for the first time in days, from inside our tent no less, and zero energy to do anything with it – c’est la randonnée. 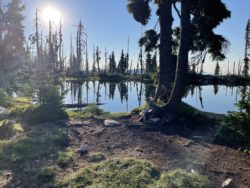 (Snow Lake the morning after)