Meet the Thru-Hiking Artists Inspired by the Appalachian Trail

One spring day in 2018, Tina Tempest, owner of the Quarter Way Inn hostel near Ceres, VA, noticed one of her guests sitting at the table creating a small painting of rhododendrons.

“I was, oohing and aahing, and I asked her, ‘Would you like to do an art-for-stay?’ ” recalls Tempest, who hiked the Appalachian Trail under the trail name Chunky in 2009.

“What is ‘art-for-stay?’ ” asked the painter, Rebecca “V-Dub” Harnish.

“It would be a work-for-stay (a practice where hostels allow hikers to work in lieu of paying for their accommodations) where you make a little painting for us and leave it here,” Tempest explained. 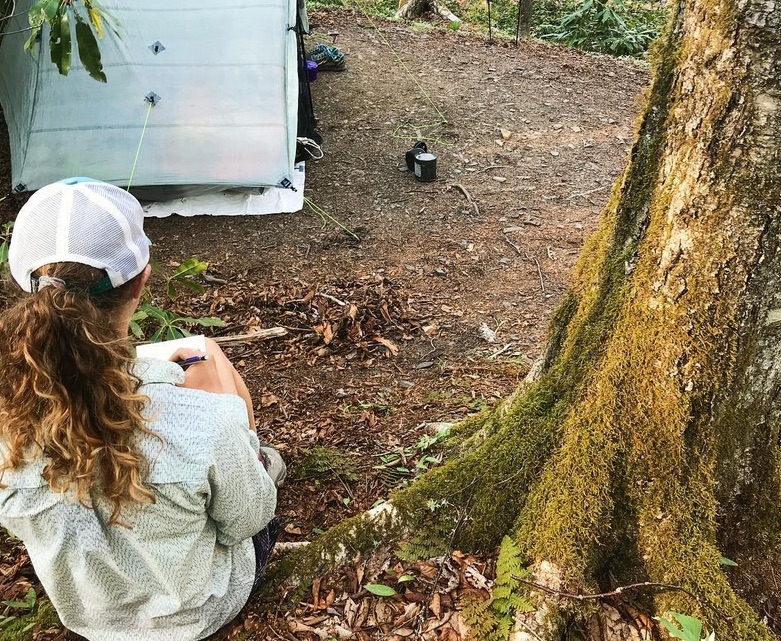 Harnish, who hiked the Pacific Crest Trail in 2016 and Colorado Trail in 2017, agreed and began working on a piece depicting the century-old sycamore tree and ceramic blue foot leading up to the historic home where Tempest has operated the hostel since 2015. Harnish decided to take a zero day and work on a second painting.

Although she didn’t have time to put the finishing touches on the pieces, Harnish returned home after summiting Katahdin, completed the paintings, then sent them to the inn. Tempest liked them so much that she teamed up with Green Mountain House hostel in Vermont to sponsor a series of postcards featuring AT-themed art by Harnish. 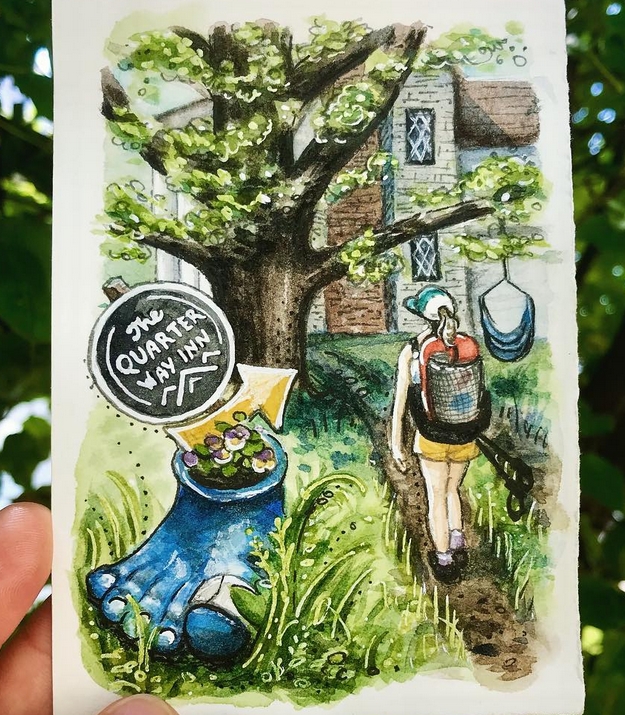 The postcard created by AT hiker and artist Rebecca “V-Dub” Harnish for the Quarter Way Inn. Photo courtesy Rebecca Harnish.

“Hikers love them,” Tempest says. “So many people try to do AT-related work, throwing a white blaze on something that isn’t really in the spirit of the AT. But V-Dub portrays things like snack food, washing socks in a sink, the real AT experience. She gets it.”

“There’s just the natural beauty around you all the time, constantly,” Harnish says, explaining the allure of the trail for artists. “The trail is a really good time and place to rethink your priorities in life and focus on things that are important to you again, instead of getting lost in the routine of daily life and your office job.”

Harnish, who recently moved her “tiny” house to Asheville, NC, is just one of the many AT hikers who find that life on trail has a way of drawing out their creative impulses. Whether it’s yowling Neil Young lyrics while plucking a strum-stick by the campfire, composing verse in your head as you slosh through a rainstorm, or stopping to sketch a scene, the trail has served as an inspiration to countless works of art over the decades. 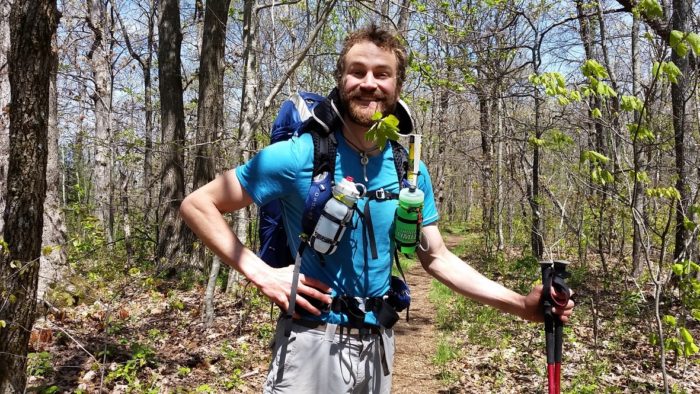 Daniel “Screech” Zube published a book of photos and poems composed while walking the AT in 2017. Photo courtesy Daniel Zube.

Daniel “Screech” Zube grew up hiking in the White Mountains of New Hampshire, where he met his first thru-hiker. He was astonished to learn that the man had walked all the way from Georgia.

“I was totally blown away. I’d never known what the AT was until then,” Zube says. “That left an impression on me, for sure. That’s part of what made me decide to do the AT myself.”

Although he’d done plenty of adventuring in between jobs as a mechanical engineer, he didn’t start his own thru-hike until years later. In March 2017 he left a job in Denver for a monthlong rafting trip on the Colorado River. When he finished, he packed up a U-Haul, moved back to New Hampshire, and flew to Georgia “to start hiking back home.”

Zube’s mother and sister both write poetry, but he’d never written a line. It took about a month of striding through the AT’s infamous “green tunnel” to inspire him. He had vowed not to listen to music, audiobooks, or podcasts while walking, and soon found himself spontaneously composing brief haikus, tankas—a short Japanese form that focuses on nature and emotion—and limericks based on his daily experiences.

“I would speak them into my phone using voice text. The only way I could craft the poems is if I was physically walking,” he says. “I tried to do it in the morning or at night, but I couldn’t. Once I started walking, the poems just started coming.”

At times, Zube felt as if the trail were collaborating with him.

“There were certain times when I almost felt like the poems were not coming from within me, but were instead passing through me, coming from the trail or some other place,” he says. “I’d think to myself, ‘Whoa, that’s was a good line, where’d that come from?’ ” 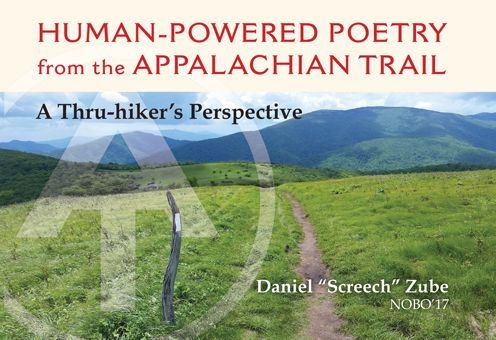 Daniel “Screech” Zube’s book of AT poems and photos.

After completing his hike, with encouragement from Laurie Potteiger, information services manager for the Appalachian Trail Conservancy, and his sister, who had created books pairing Bible verses with photographs, Zube published a collection of poems with matching photos, “Human-Powered Poetry from the Appalachian Trail — A Thru-hiker’s Perspective.”

Zube’s “very charming poems… beautifully and whimsically capture the essence of the AT experience,” Potteiger says. 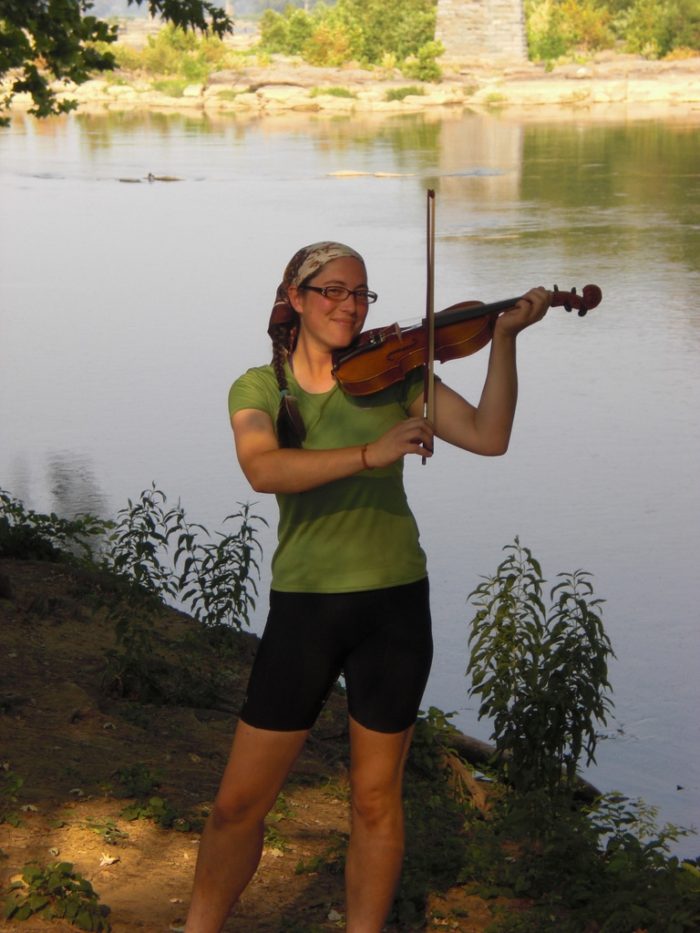 Heather Friedli earned the trail name Crafty when she hiked the AT in 2010 because she made not only her own pack and tent, but also gloves, hats, and moccasins. She’d spent some seven years planning her trip, studying textiles in college, working in outdoor education in Minnesota, and earning her Wilderness First Responder certification before she finally set out from Springer Mountain in 2010.

Every step along the way was, she says, like a walking meditation. In honor of her Mexican and Odawa Indian heritage, she carried tobacco and left small gifts for the Great Spirit as she walked.

“To me, the whole thing was a spiritual endeavor,” Friedli says. “Being in the woods really calls me back to my family’s native heritage. For me, I feel safest and most complete and whole in the woods.”

She carried a sketch book and small watercolor set, and bought a fiddle in Harpers Ferry after being inspired by the music of Appalachia.

“My pack kept getting heavier and heavier,” Friedli says with a laugh.

Once she finished her hike, the AT visited her in dreams nearly every night, inspiring her to try new mediums and styles in her painting, from Georgia O’Keeffe-style pieces to lush recollections rich Appalachian blues and purples and greens. 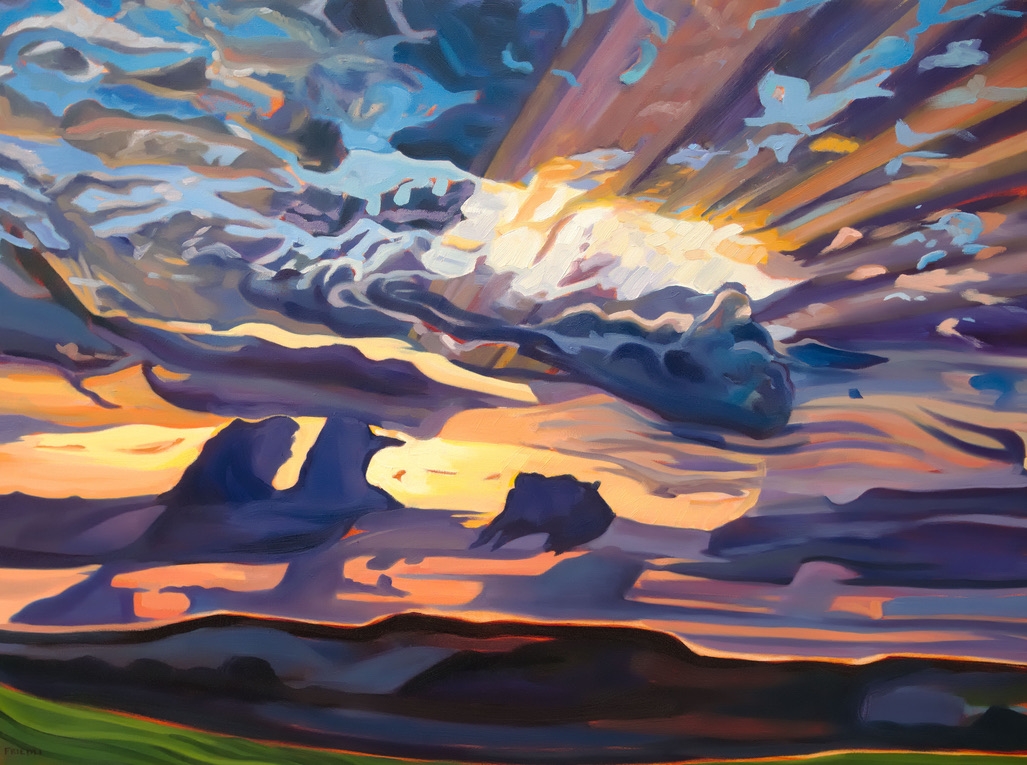 “It just kept showing up in my landscape work. I found myself wanting to paint those rolling mountains of the Appalachian Trail,” she says.

Friedli is now preparing work for a ten-year retrospective of oil paintings, “Walking with Spring: Appalachian Trail Memories.” But she’s truly an artist for all seasons: She not only continues her craft work, but also is a member of the three-person team currently reigning as national champions in snow sculpting. 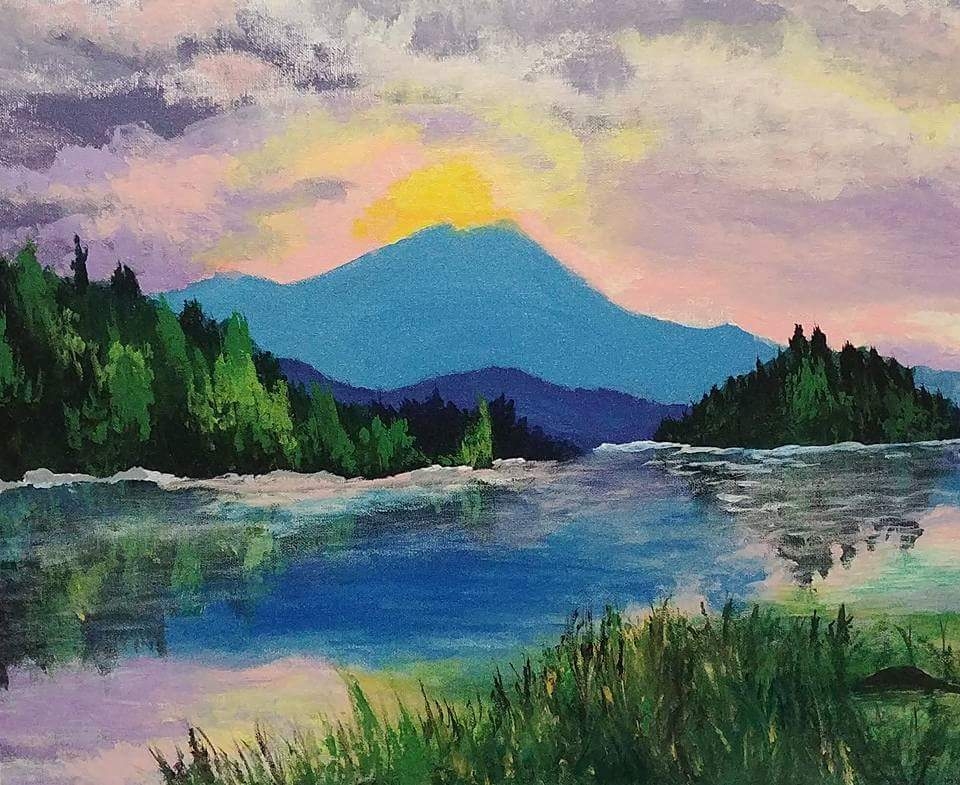 For Ashley Hill, aka Savage, creating artwork helps keep memories of her 700-mile section hike—parts of Virginia, Pennsylvania and Maine, including the 100-Mile Wilderness and Katahdin—alive.

“Each painting has so many memories attached to it. It’s like immortalizing the place and the people you were with,” says Hill, who now lives in West Virginia. “I especially love painting landscapes; it’s like going back to the trail for just a little bit. I want to be able to give other hikers that same kind of feeling when they see my work.”

Her favorite AT piece portrays Rainbow Lake in the 100-Mile Wilderness.

“A lot of thru-hikers skip it, because it’s about a half-mile off the trail,” she says. “But it’s worth that extra mile of walking. I had a beautiful sunrise view of Katahdin and I woke up to the loons calling.” 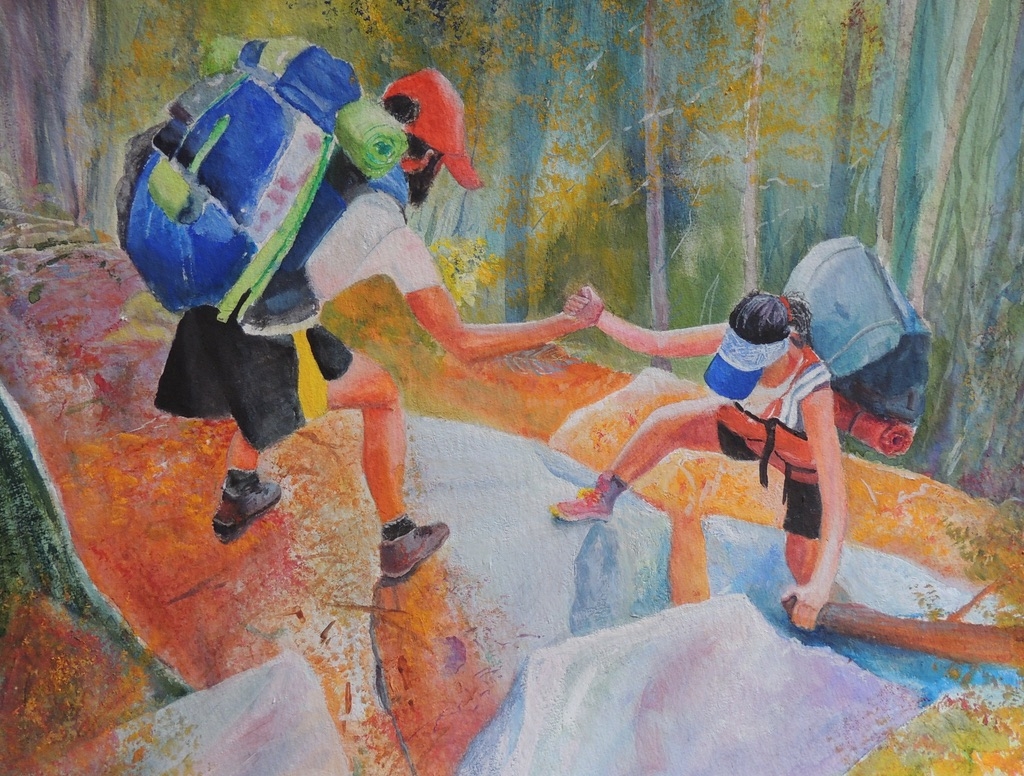 Morris Jensen, a British citizen now living in France, still hasn’t achieved his goal of hiking the Appalachian Trail. But that hasn’t stopped him from painting scenes from his dream.

He has hiked the Camino de Santiago and this summer is walking the Chemin du Puy, or Le Puy Route of the Camino. If he does ever get the chance to hike the AT—a six-month limit on visas has been one sticking point—he plans to take his time.

“I would walk three or four days to one place, and kind of work there for a bit. I’d have some kind of transport,” says Morris, administrator of the Appalachian Trail Artists Facebook group, which he also has opened up to Pacific Crest Trail artists.

Despite not having hiked the AT himself, Jensen’s pieces portray a surprisingly familiarity with the spirit of the trail. One of his favorites shows a hiker helping another ascend a steep, rocky section of trail.

“Some people take their guitar hiking, some take a camera and some don’t want to do anything,” he says. “With me, every time I come to a scene, a panorama of something nice, I just need to sketch it. I’ll spend 20 minutes getting it down on paper. For me, it’s a poetical thing.”

Whether it’s poetry, music, handcrafted bling, or work in any other medium, Tempest suspects that the artistic work inspired by walking long trails may be intimately connected to open spaces—and not just in the physical sense. 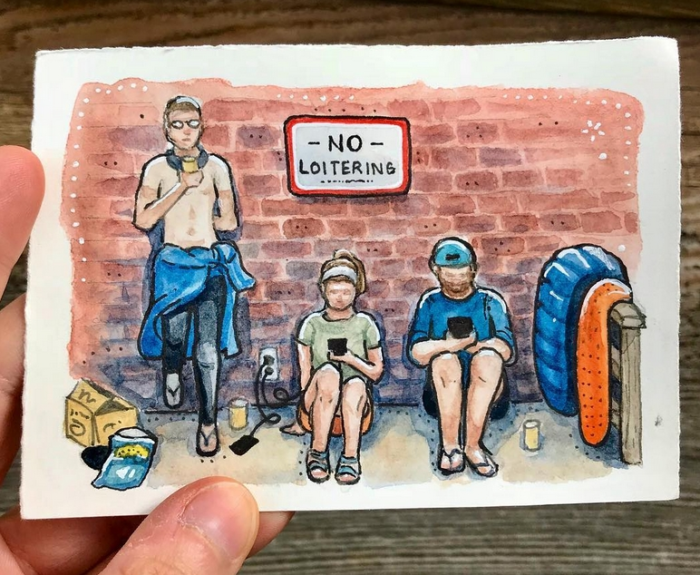 “The whole experience of walking the trail hearkens back to a simpler time. You have so few decisions to make; you carry what you need on your back… you walk all day,” she says. “That frees up space in your mind, so instead of worrying about things in day-to-day life, there is room for all those creative pursuits to bubble up to the surface.”

Work by all the artists mentioned in this story is available for sale at the following sites: