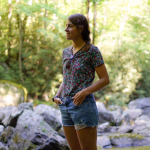 For most of yesterday and last night I spent my time in Franklin, NC. It was really great. It was my first time in a trail town and I was really impressed. All of the businesses in town and the people who live there are all about the hikers. There are deals at most restaurants, free postcards and postage at the brewery, free shuttles, hiker boxes at most places, to name a few perks. If you don’t know what a hiker box is – it’s literally a box of stuff hikers leave and take from freely. Today I left some garbage bags and duct tape. There are usually boots, clothes, food, trekking poles, and other gear in the boxes. It’s a pretty awesome system.

I ended up going to Lazy Hiker Brewery and had a couple beers and a burger. I also went to Outdoor 67 and bought a new utensil. I accidentally left my spoon with Jess. So I bought a new spoon with a longer handle. This way it’s easier to stir rice and noodles on the bottom of my pot. It will avoid burning too!

This morning I went to a local coffee shop. I got a coffee and a bagel and then walked to Dollar General to resupply. I got some good deals and everything on my list.

On my way back to my room I passed a local diner and decided to stop. I wasn’t all that hungry but ordered a sausage and egg sandwich and 4 pancakes anyway and almost finished everything. Maybe I am getting an appetite after all.

I got back on the trail around 11:20 and walked until about 3:30 to the nearest shelter. I could have gone to the next but it would have been at least 7:00 or so until I got there. I’d rather get up early tomorrow and have the whole day to get some big miles in.

When I got to camp, I was greeted and introduced to some faces I’d never seen before. I set up my tent and hung out around the fire for a couple hours. I made rice and added an herbed salmon packet. It was pretty good.

Today was a pretty solid day. The sun was shining on and off and my body as a whole felt stronger. I mean, I’m still sore and my feet always ache but as a whole, stronger.

It’s kind of strange to look down the trail and see a newly paved road. I mean, usually I’m just looking at greens and browns.

Around mile 16 today, my body was feeling less strong and more weak. It probably had something to do with the rain pouring into my shoes. I think rain just has that effect though. It can sometimes make you sad or feel bummed out or make you tired. Anyway, around mile 16.5, I looked up and saw a pretty awesome sight. It had stopped raining for a moment and the sun was hitting one part of the mountains and rain was hitting the other. I could actually hear the rain in the distance. And also a partial rainbow peeked out on top of a mountain. Pretty beautiful. The photo doesn’t do it justice. 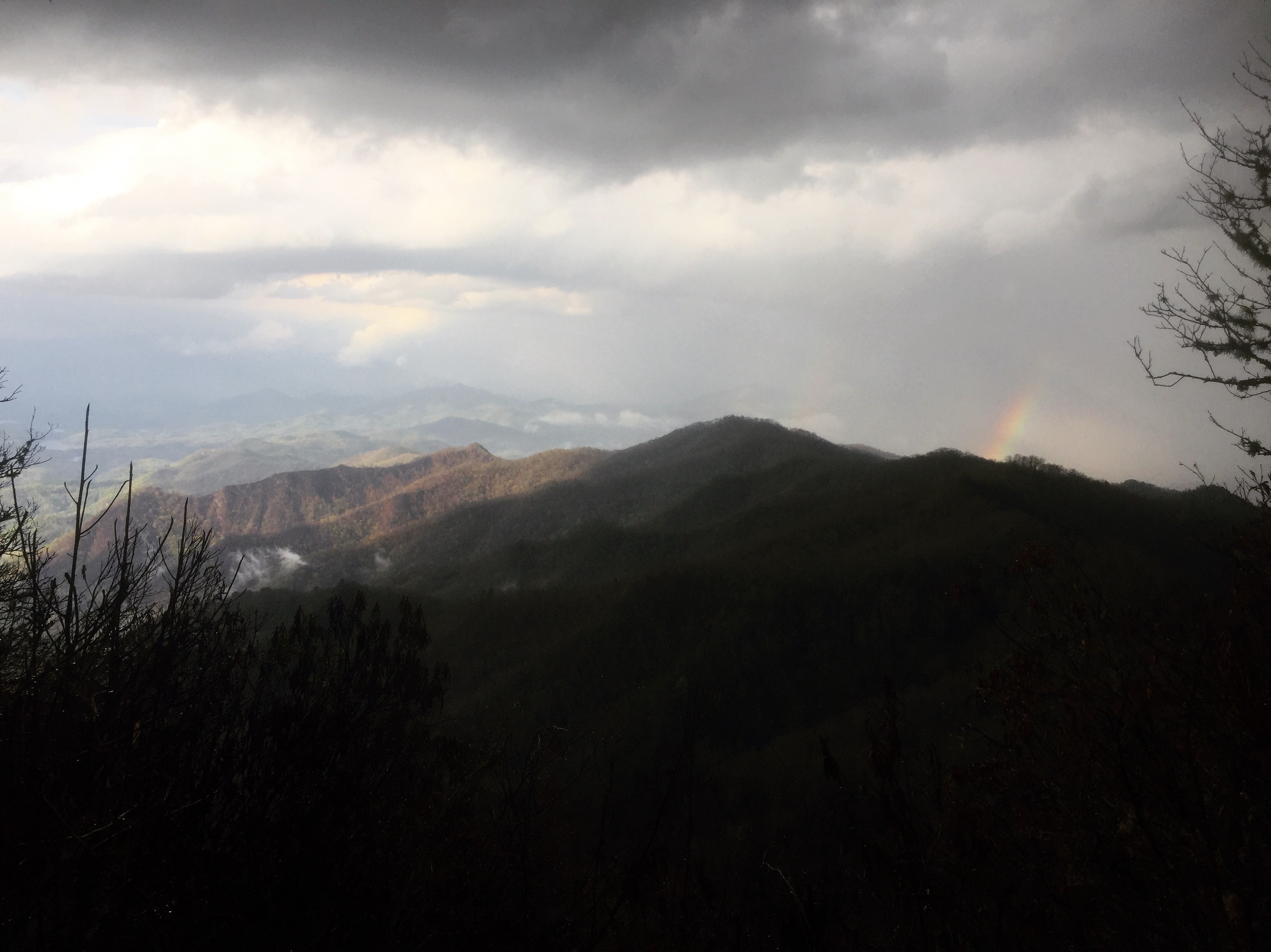 Tomorrow I’m going to stop at the NOC which is an outdoor center right on the river with an outfitter store and restaurants. I’m going to shower there and stay in the bunkhouse. All of my stuff is wet again so I’ll do laundry and air out my tent too.

I don’t like to stay in the shelters. One reason is the mice. Reason number two is loud snoring, close quarters, and people ripping ass. It’s just the truth! And right now I’m in my tent up the hill from the shelter and can still hear snoring. Come. Onnnnn.

I made it to the NOC. I actually made it around 11:30am this morning. I immediately went to the general store, grabbed a Coke Zero, a bag of Doritos, and an IPA.

The Appalachian trail literally runs right past the store, a restaurant, an outfitter, and a bathroom. It’s pretty great. The river here once held the Olympic trials freestyle kayak competition. Pretty awesome.

I ended up eating at the BBQ place and the restaurant. It was sufficient. I also hung out with some fellow thru hikers along the river. It was nice. I still don’t have a trail name and everyone was trying to come up with one tonight. I just really don’t want it to be forced. I guess I’ll know it when I hear it.

Tonight I’m in a bunkhouse. I’m really glad because it’s storming outside right now. I regretfully might have to take a zero day tomorrow and I’m bummed. There’s a 100% chance of rain and the climb out of here is all up hill and I’ve heard it’s pretty difficult. I’d rather not do it in a downpour and while the trail is a river. Been there, done that and it’s really hard.

I ended up staying an extra day in Nanthahla. It rained all day yesterday. It was kind of a bummer day. In the evening though, I hung out in the communal space and got to know the people that pass me and that I see in shelters a little better.

Today started off really well. I honestly didn’t have too much trouble with the climb out of the NOC. I did though, have a hard time with the last 3 miles to the shelter. It was a really steep climb and my feet had had enough for the day. They’re tingling and throbbing right now. I hope they’ll be okay tomorrow morning.

I have been feeling self conscious about constantly getting passed on the trail. I know that may seem silly but it makes me feel weak. I’m doing the same miles as most of them but at a slower pace. It’s just frustrating.

I seem to have a bigger appetite. I ate a variety of things for dinner tonight including some chili ramen which was actually really delicious.

I’m at the Fontana Hilton tonight. It’s a 20 person shelter on Fontana Lake with a real bathroom plus shower and an awesome view.

I was able to get a ride into town and have an early dinner and make it back out to the trail, get to the shelter, set up my tent, take my free shower, and relax and watch the sunset. Pretty solid day.

Tomorrow I have a pretty long climb once I enter the smokies. I’m real excited.

Today I woke up at 6:00 and was walking by 6:45. I’m glad I got moving early because the sunrise walk over the Fontana Dam was beautiful. I ended up taking my time and took a bunch of photos. 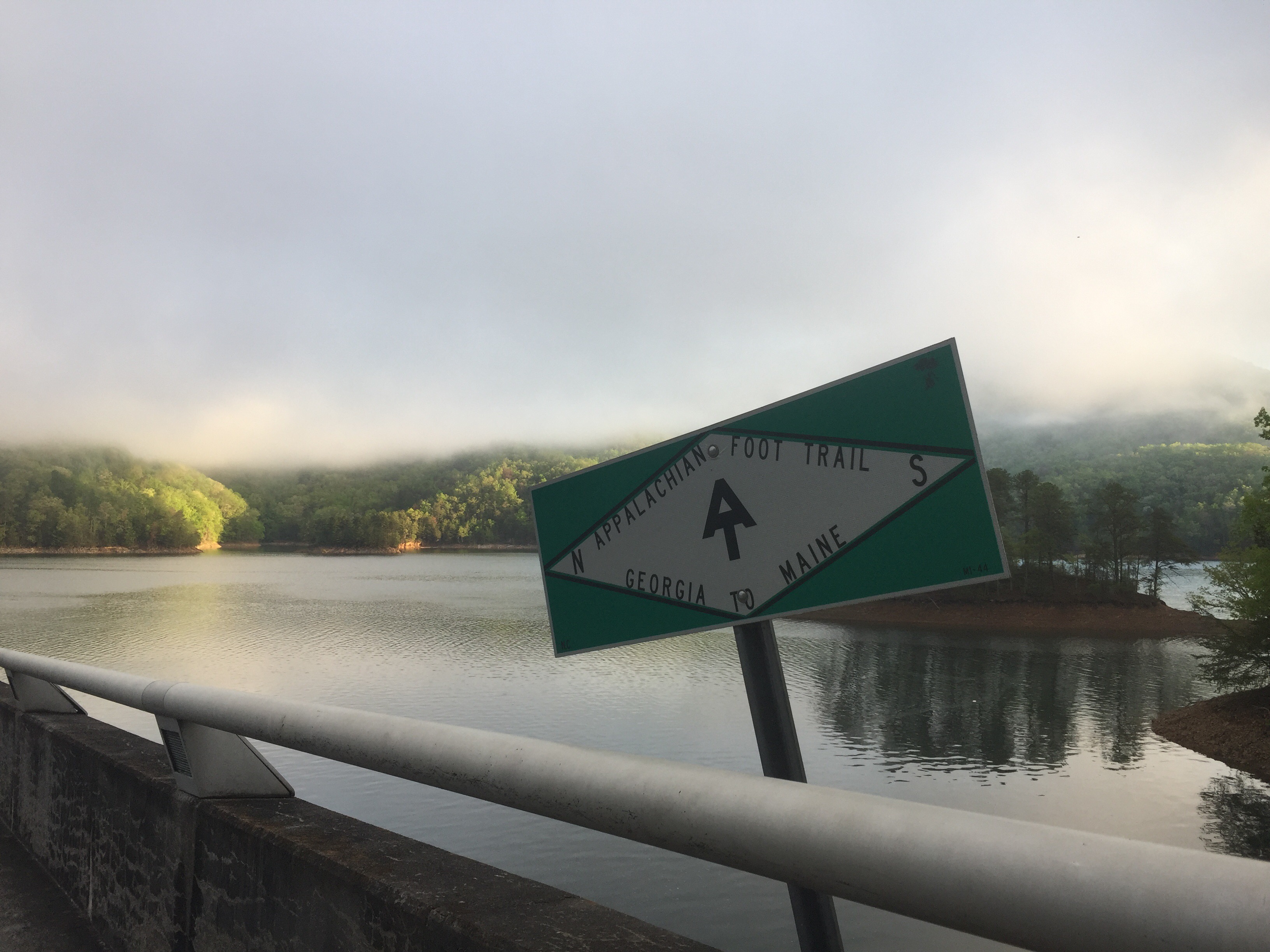 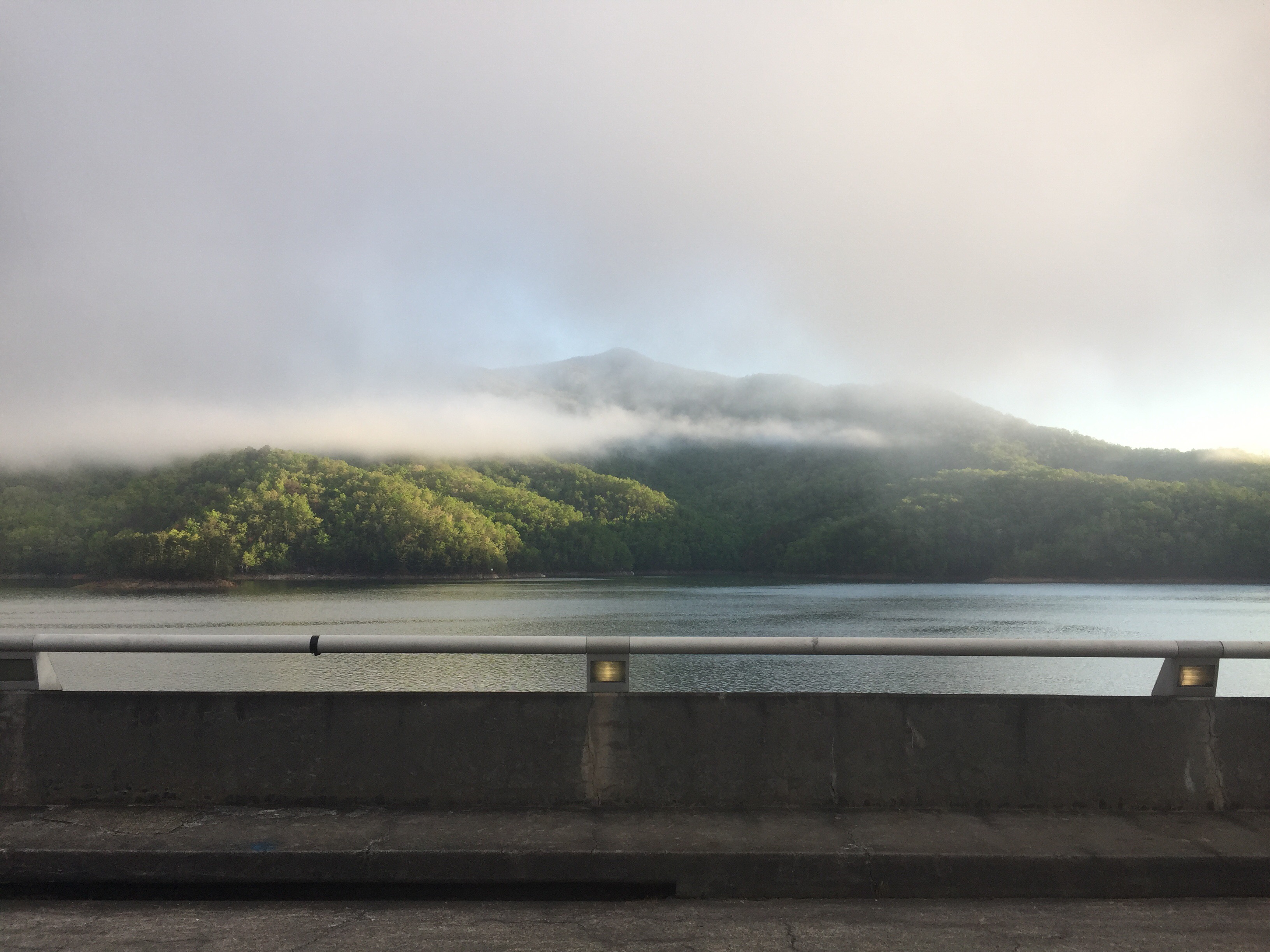 After I crossed the Dam, I sat and had breakfast – a protein bar and some apple sauce. I also clipped my nails. The AT then follows a road for about a mile, at some point you enter the Smoky Mountains and place your permit in the box, and then the day long climb began. Seriously, all day, uphill.

About 3 miles into the climb is a mountain peak with an old fire tower about .1 off trail. Myself and Triple A (which I just met today) decided to check it out. I’m glad we did. The views were insane.

The rest of the day I just chugged along.

I made it to Russell Field Shelter and had my tent set up around 4:30. I made a knorrs curry rice pasta side for dinner. It was real good and spicy.

Since I got up early, I’m going to fall asleep soon I’m sure. It’s not even 8 o’clock yet.

A thought I was thinking today – I either need to embrace the body hair or try to keep up with the body hair. Either way, it’s a struggle.

I’m not going to lie, today was rough. I walked in mud, rain, and harsh winds for a total of 10 hours.

On a positive note – Today I did save a snail from potentially drowning or getting crushed.

Today, I finally got to see Clingmans Dome – the highest point on the trail. Pretty sweet views.

Because of the rain yesterday, the trail is still so muddy and slippery. There’s no way of avoiding the mud. I’ve tried several different methods to avoid the mud and fail every time.

Well, I made it to mile 207 and hitched a ride with a couple other hikers into Gatlinburg. It honestly wasn’t too hard to hitch and the guy that picked us up was a local that wants to do the trail in the next few years. He kept asking us questions about the trail and was fun to answer.

I just ate dinner at Texas Roadhouse with a solid group that I see almost everyday. We then all went to the general store to grab snacks for the next week. And I am now in my motel room ready for snoozeland.

Earlier today I came across a 70ish old woman. She had trekking poles, new hiking boots, and a nicely polished hiking outfit on. She was sitting on a dirt step on the trail taking a break. She was about a mile and a half from the parking lot and most of the climb is uphill from there. For some reason I started tearing up. I just thought it was really amazing that she was alone, sitting there and resting, and taking it all in. It made me take a breath and remember why I’m doing this and how important it is to take a rest and take it all in.