I woke up on the morning of day 13 already exhausted. My body ached. I didn’t want to get out of my warm sleeping bag and put on my cold, wet boots. (My feet had been wet for days). I just chilled there in my tent for a good few hours, listening to the wind and the birds.

I decided that the day was going to be a short and slow one. After all, it was my 13h day in a row of walking – I had not taken a zero day since I started, way back in Victoria. It was two more days to get down out of the mountains and into the Comox valley, where I would be finally getting some much-needed rest at my mom’s place. Oh how I wished I was there already! Instead, I had to scramble down the rest of Tsable mountain, then climb up to a final ridge walk before the gradual descent into the town of Cumberland began. 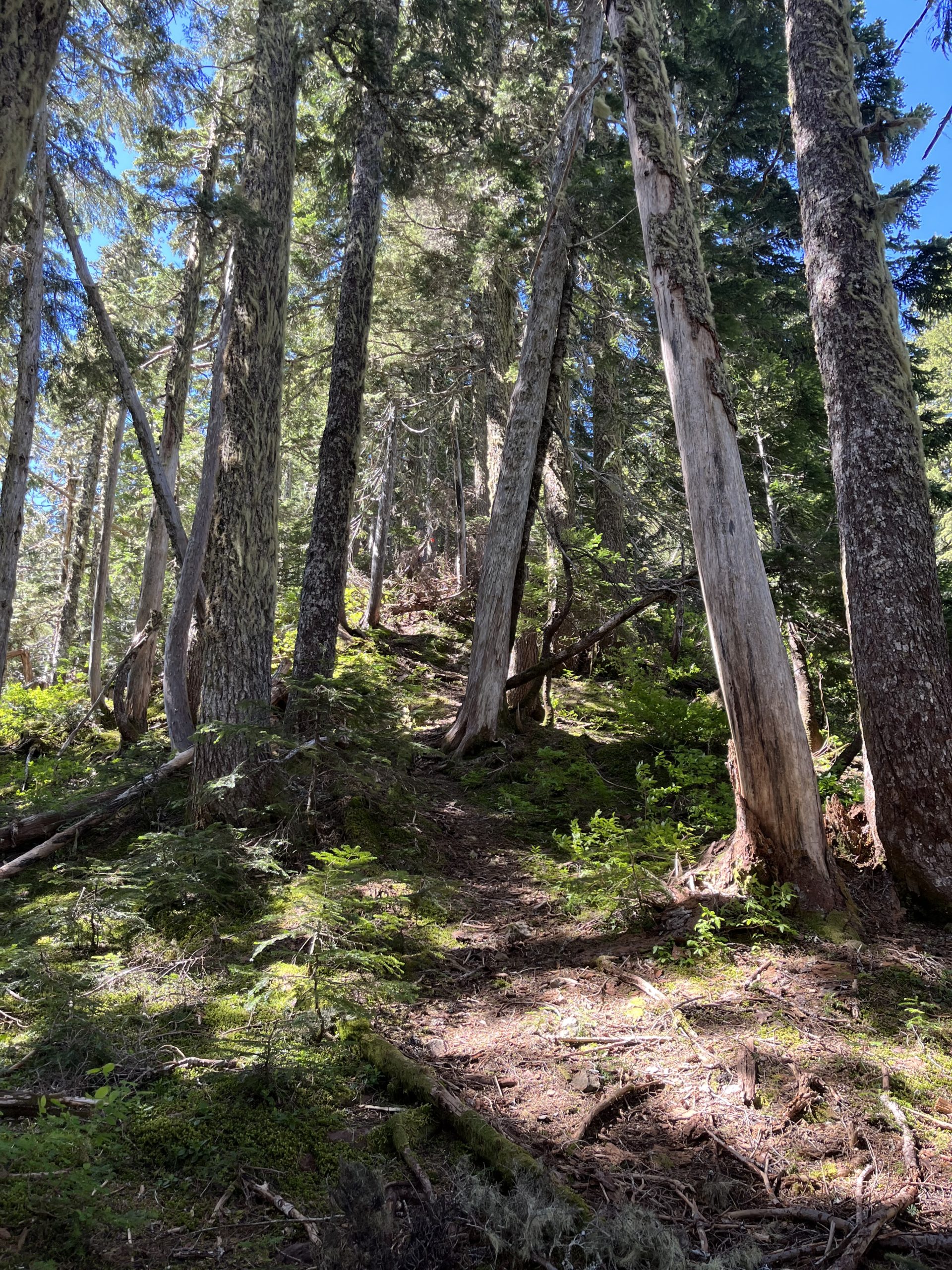 The last bits of uphill…

If there was a pro to the bugs, it was that they made me pack up quick, once I was out of my tent. But other than that, the morning was slow going – I stopped frequently on the climbs to catch my breath, and on the downhills as my right ankle was really starting to bother me. I prayed that it would hold up for another day and a half – just to get me back into civilization. (At this point, I had not seen another soul since the morning of day 10). 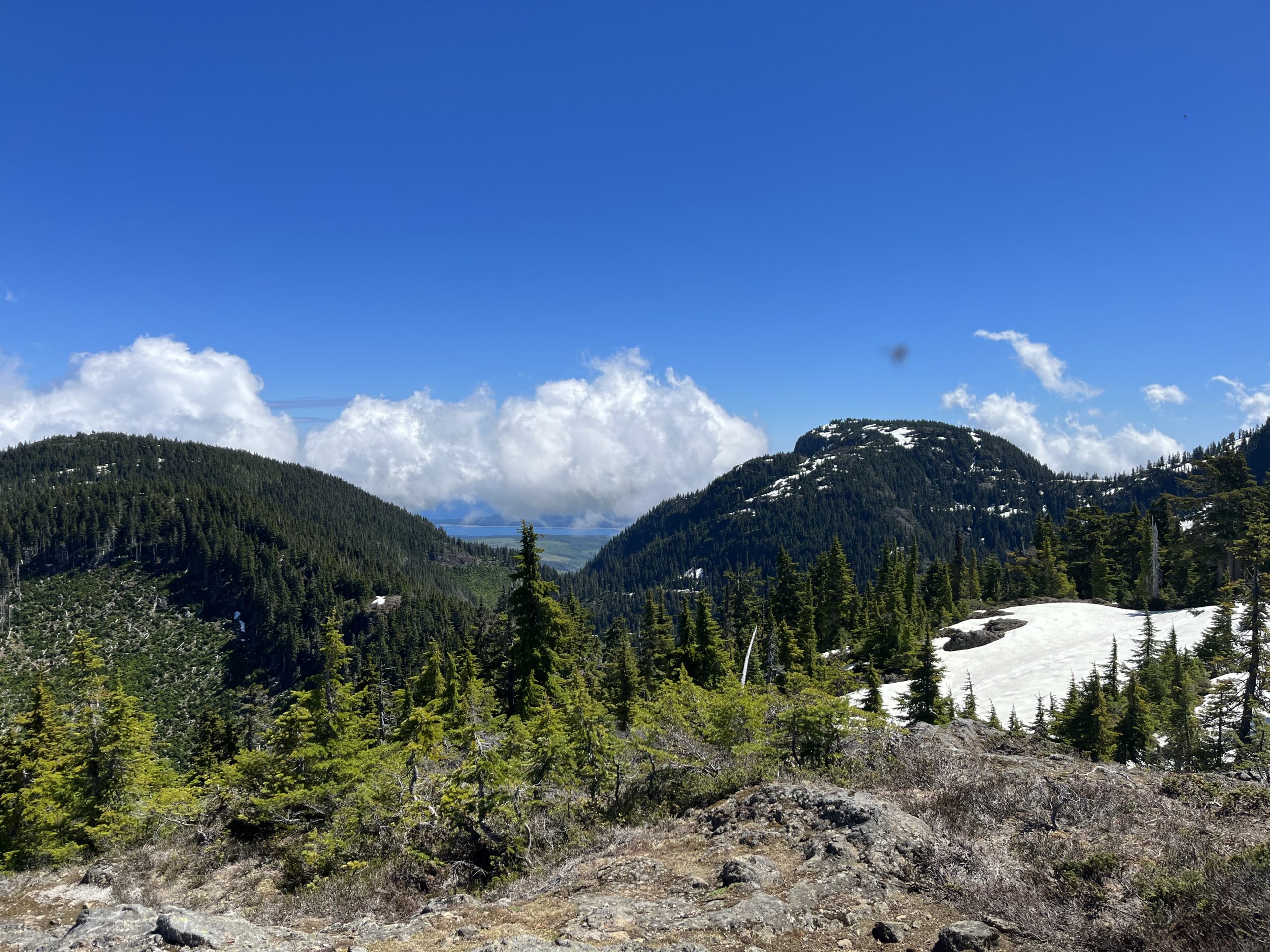 Looking back on Tsable Mtn

I finally descended upon Tsable lake in the afternoon. I had planned to camp there for the night. But strangely, once I had reached my goal for the day, I got a sudden burst of energy. Maybe it was the excitement of being able to sense that I was less than 24hrs away from a shower and fresh food. So, despite my plans, I pushed on with renewed vigour, inspired to make it as far as I could before I totally collapsed. 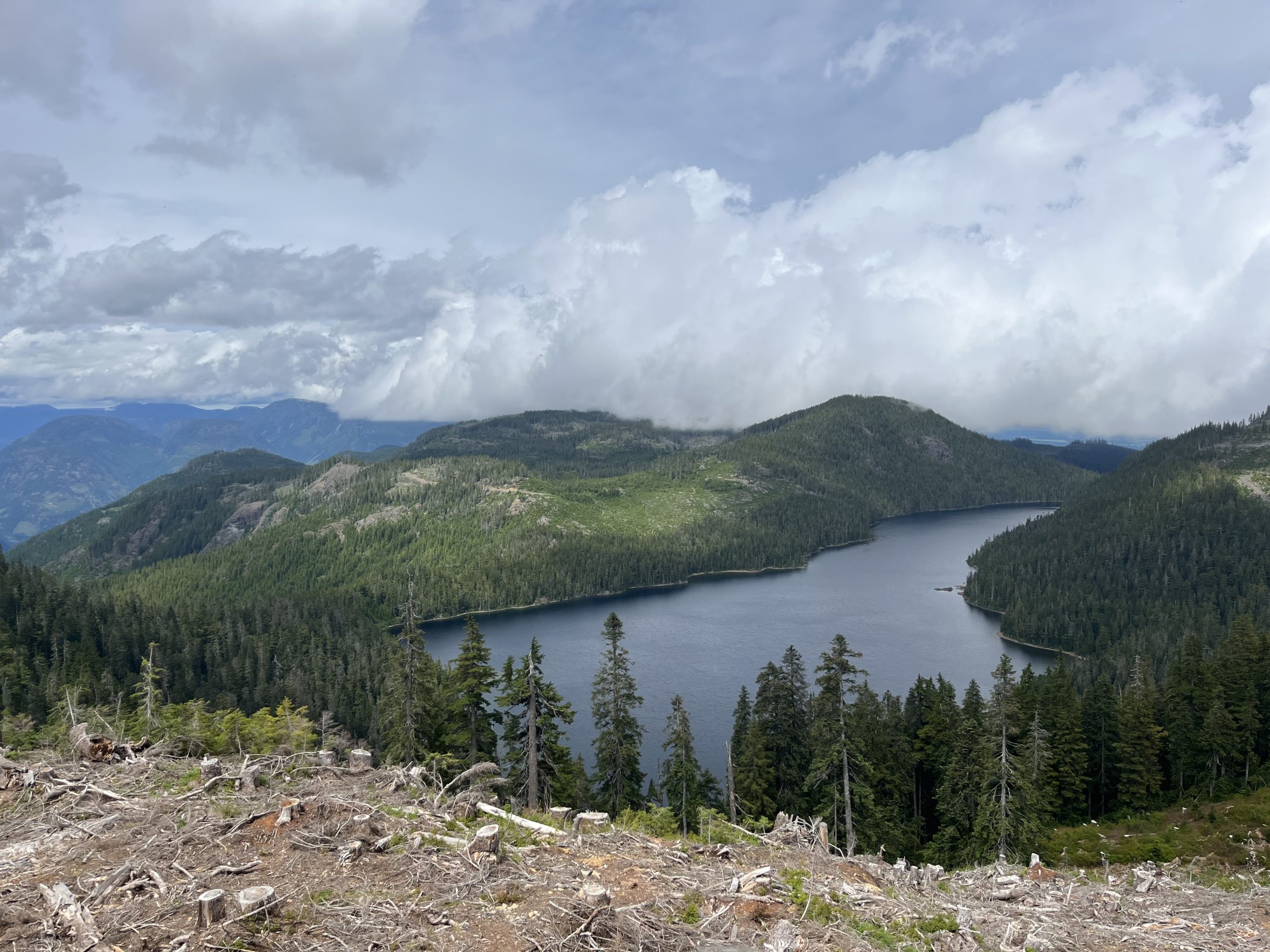 The whole trail that day was well marked, and I could see that some stretches had been cleared of brush very recently. Actually, I saw via Facebook that one section of particularly gnarly windfall had been cut away just 2 days previously by VITA volunteers! I commented my thanks for saving me from the crawling and clambering just in time. 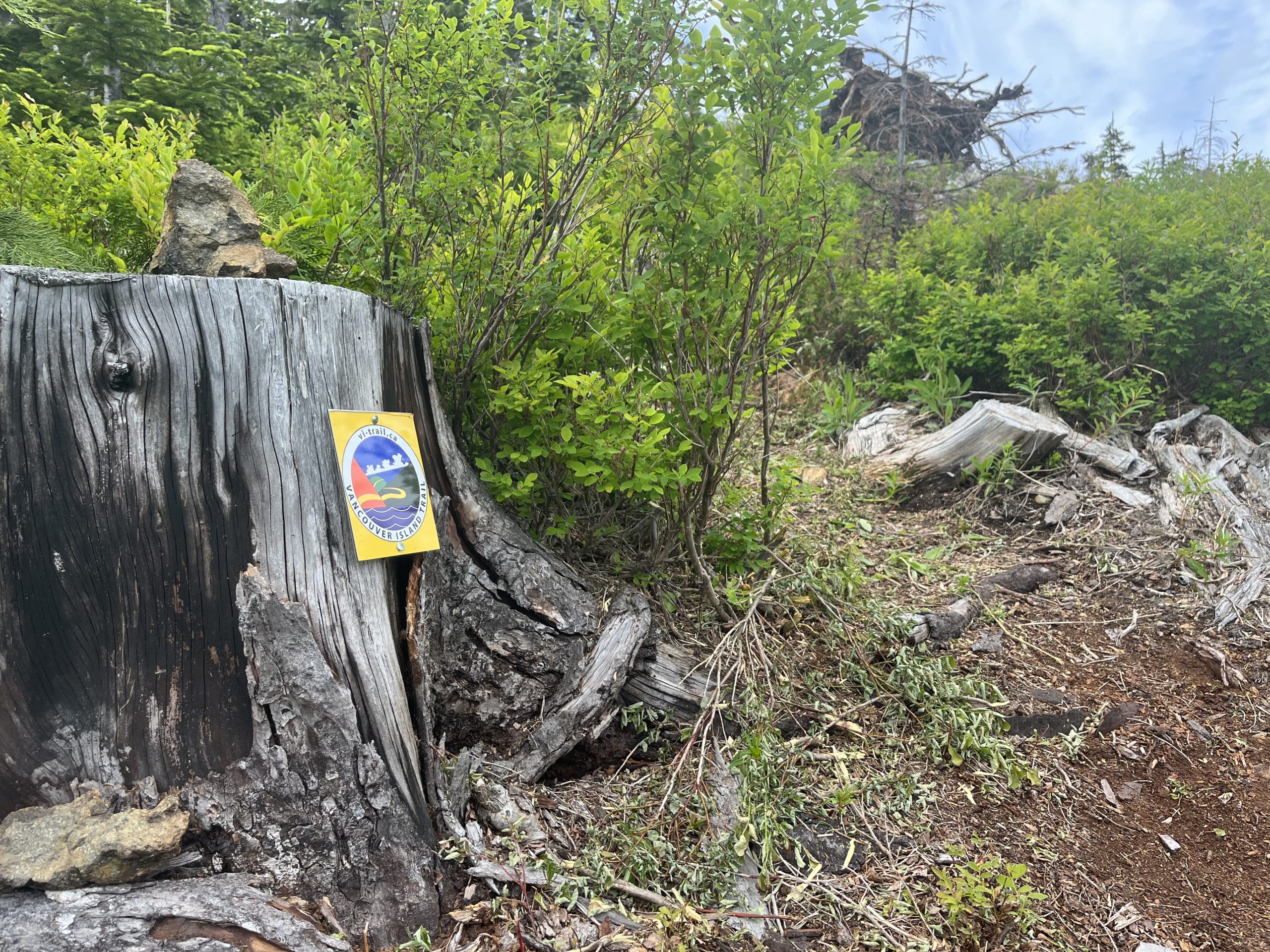 The last day into town held some unexpected experiences. I was anticipating a short and easy glide into Cumberland, following the rest of the Tsable lake trail and then winding through the network of mountain bike trails in the Cumberland Community Forest to finally end up on a sidewalk again.

The first surprise was the crossing of the Trent River Potholes. I has seen on the map that I’d be crossing a blue line, and I didn’t think much of it besides hoping that I would not have to get my feet wet (My boots and socks were still damp from the snow, but having to fully soak my shrivelled feet again would not have even good for my morale). I heard the sound of the waterfall before I emerged from the trees, and dreaded a scene of deep, fast water – but, what greeted me was a beautiful series of clear pools held by interesting rock formations. And I needn’t have worried – there was a log and a rope for a safe, dry crossing. 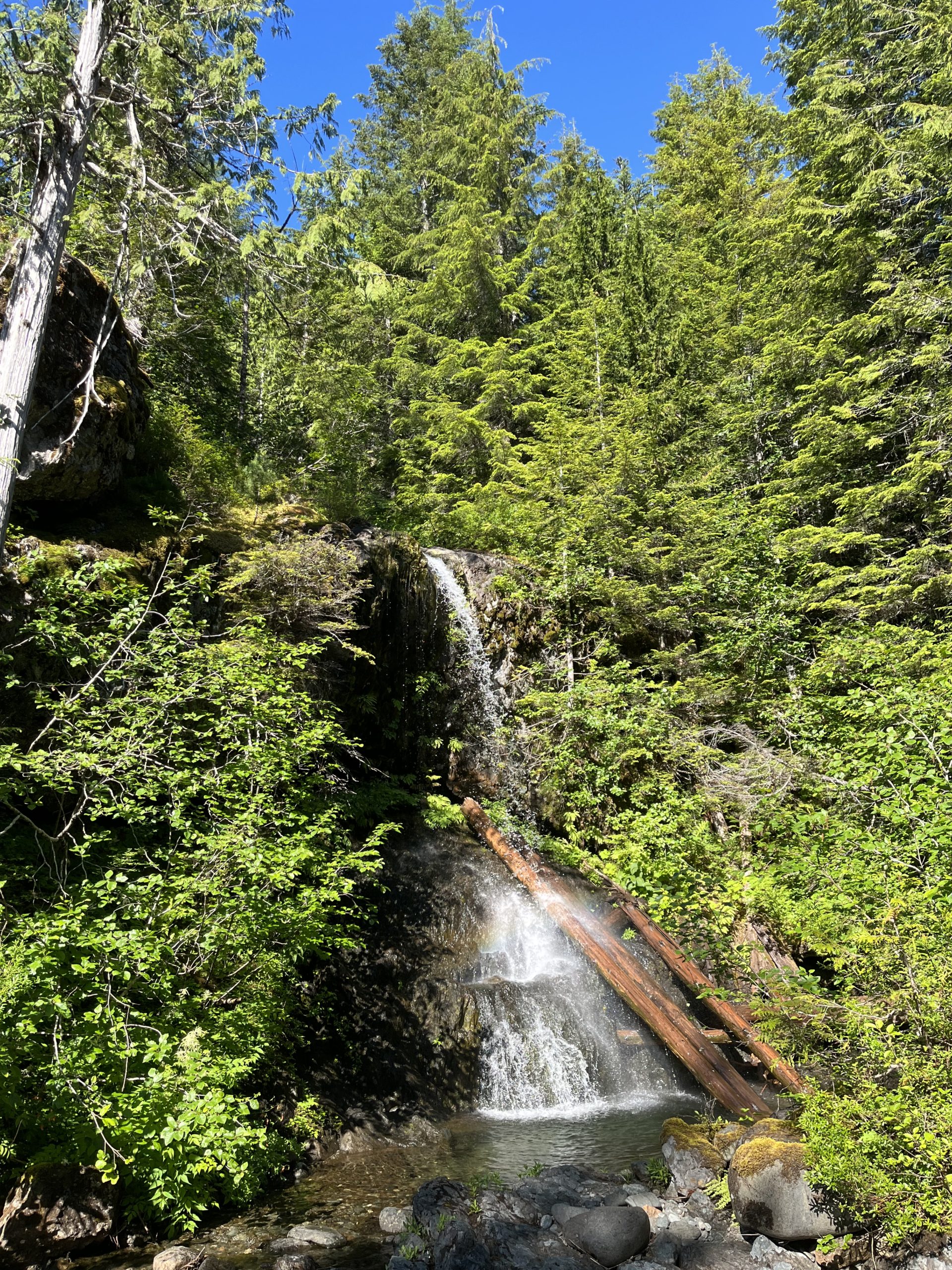 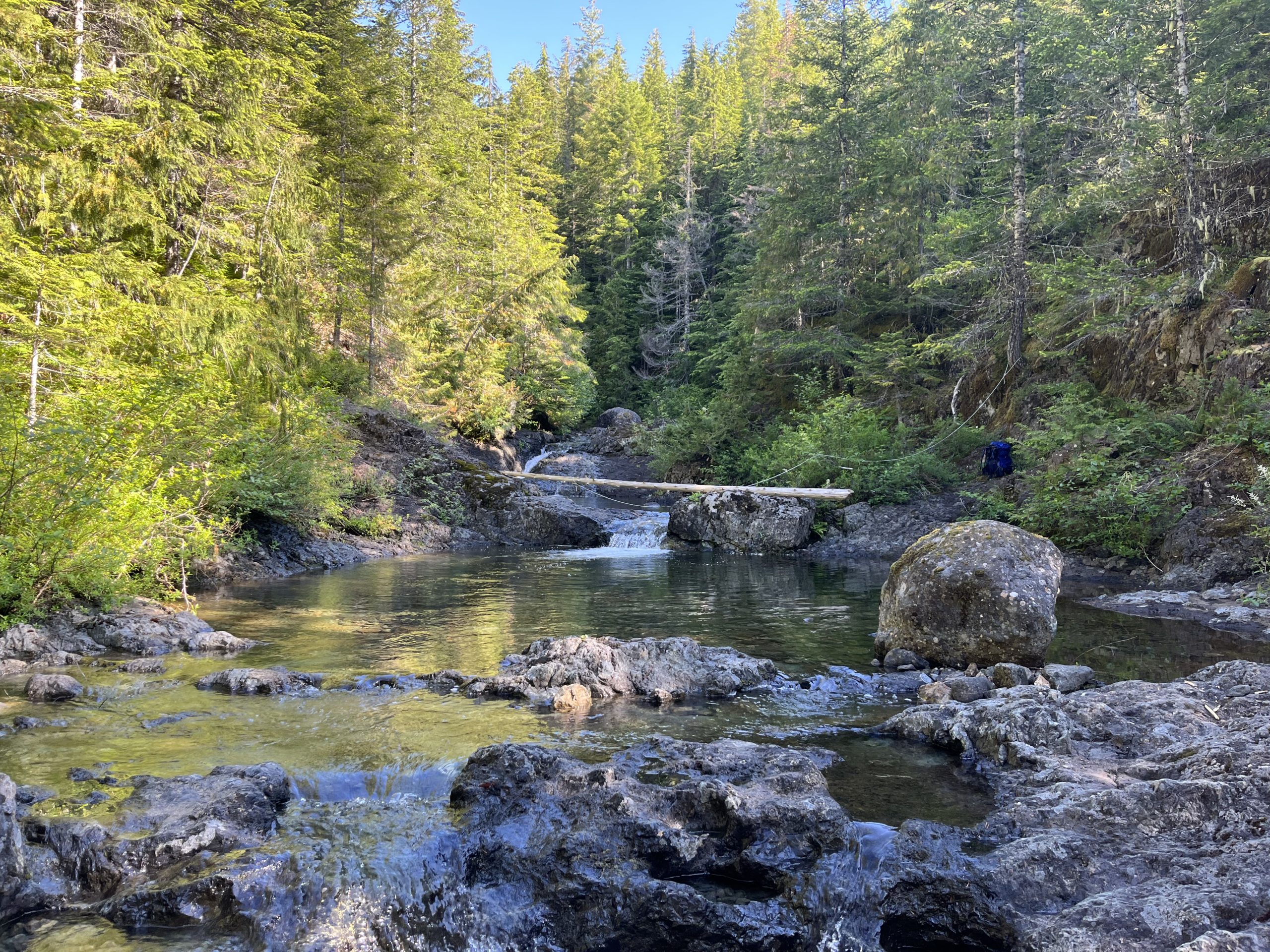 Making my way through the forest, I took a wrong turn at some point and ended up on Trent River Main, instead of the river trail. The road went in the right direction and intersected with the right trail further on, so I decided to continue and not turn back. Luckily for me, if I hadn’t taken the wrong turn, I wouldn’t have seen my first cougar! I saw a flash of golden fur in the sun, and looked up to see the large cat cross the road in front of me, walking away from me. It then followed the side of the road for a while before disappearing into the bushes. I was making noise, but it didn’t appear to be bothered by my presence and didn’t even turn around to look at me. It was a really unexpected encounter. I surprised myself, because for all my wildlife fears, I was not scared at all in that moment.

By the time I dove into the network of mountain bike trails, my right foot was killing me. The sharp pain from my ankle blister was difficult to bear, so I walked a while with my shoes off. The soft dirt trails were actually pleasant underneath my feet. 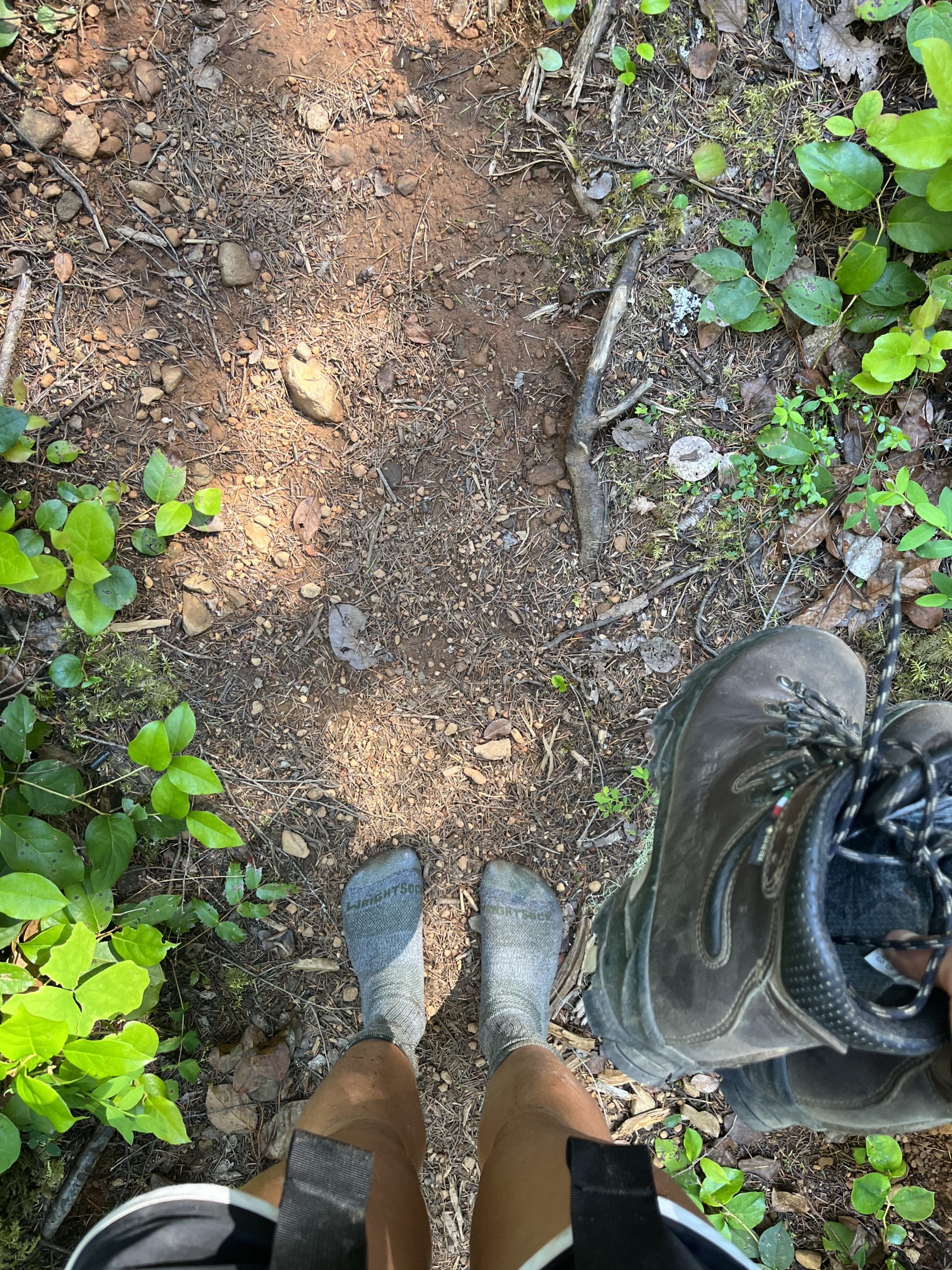 After I while though, I got impatient with my slow progress, with having to be more careful in avoiding rocks and roots. I duck-taped my ankle to prevent the rubbing and put my boots back on. That worked – I was back to racing like a mountain bike all the way to the finish line. 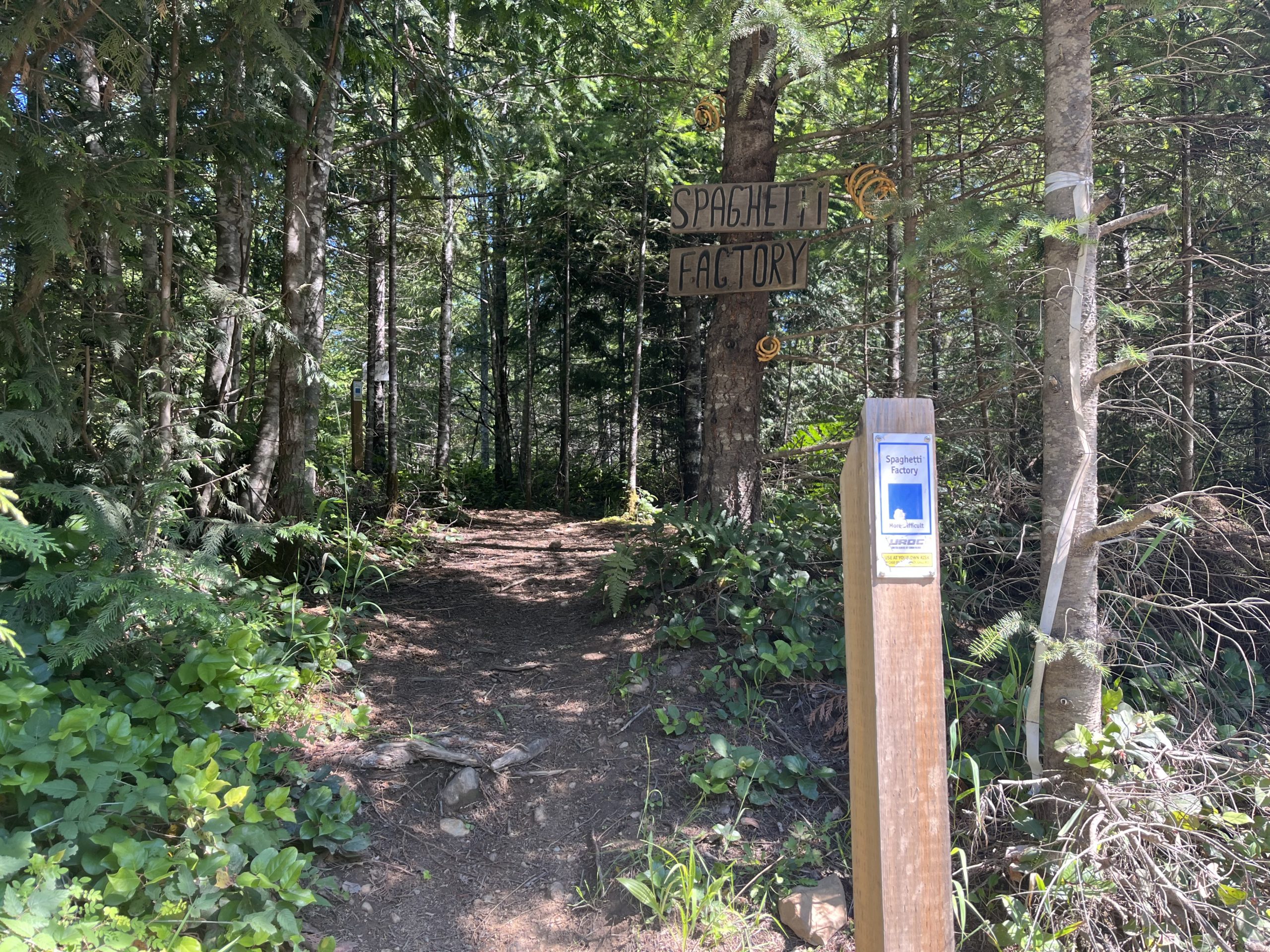 When I woke up the next day, I felt almost sick. Everything hurt, and I was very dehydrated. I was glad my body had held it together this far – 332.4 kilometres covered in 2 weeks of non-stop moving! (That’s what my health app on my phone says anyway).

I was even more grateful for the break. I was definitely going to be taking a few days’ rest, to recuperate and reassess my plans before pushing forward. With a window of a month and a half of time before I needed to be back for the fall semester of school, I was not in a rush to go anywhere before I was fully re-energized and ready to continue on.

I ended up meeting with Terry, one of the directors from the VITA, that afternoon. We had been in contact throughout my hike so far, as I kept him updated on my progress and he sent me useful bits of information about what was coming up next. It was great to meet in person! We had a good catch up as I recounted the state of the parts of the trail I had seen so far, and he told me about the maintenance he was doing farther north, cutting away the blowdown around Grilse Creek that had been really terrible this winter/spring.

And speaking of terrible winters, I talked about the amount of snow that I had seen up in the Beauforts (that still hadn’t melted in mid-July!), and how it made it difficult in places to see the trail or climb around cliffs. The next section of the trail that leads from Cumberland through Strathcona park up to Upper Campbell Lake wound through the Forbidden Plateau, which I knew from reading trip reports was still seeing plenty of snow (which was even covering tent pads in the campsites), and up some even higher elevation peaks (1800m+) that surely were also quite snowy. Even though I had made it through the Beauforts without major issues, I was wondering about skipping Strathcona and the higher mountains, and coming back down later to finish them up in August when hopefully more of the snow had melted. I wasn’t married to this being a strict NOBO hike, and I was warming to the idea of changing to a flip-flop. Why not choose to come back to the mountains when the conditions were more favourable and the hiking was more enjoyable?

Terry agreed that it might be a good plan. Not that going up Mt Jutland and Mt Adrian/Rogers Ridge/Lupin Ridge now was a totally dangerous thing, but that it might be nicer to experience that area when it was a little clearer. And so it was settled – after the second opinion. After my rest, I’ll be continuing on north from Upper Campbell Lake, to cross the Strathcona Dam and head into the river valleys beyond.

On parting, he even gave me a really cool patch which I can’t wait to sew on my pack! 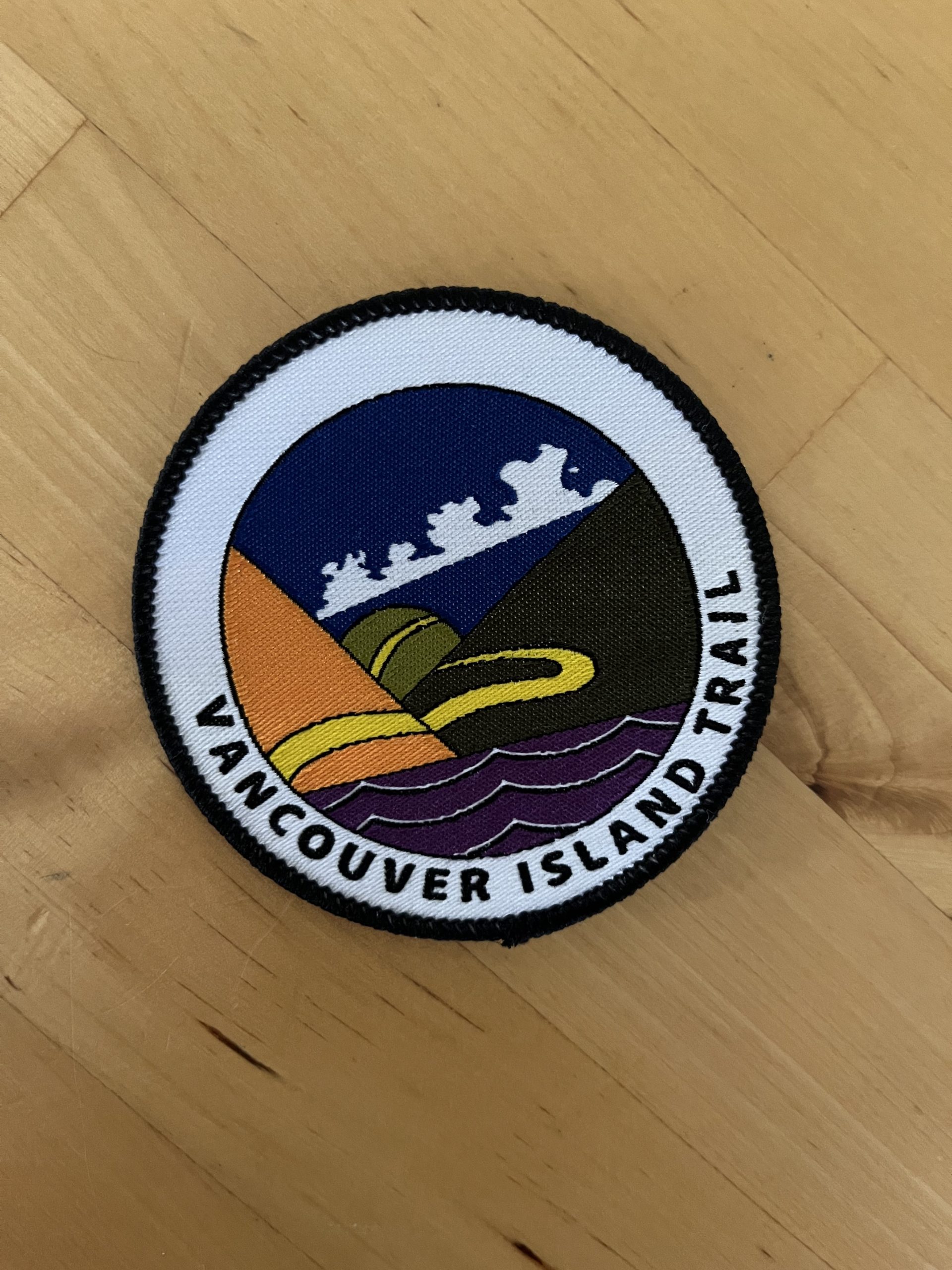 I’m part of the club now

So now, I rest, before the next stage of the journey. Thank you for following along with me this far!