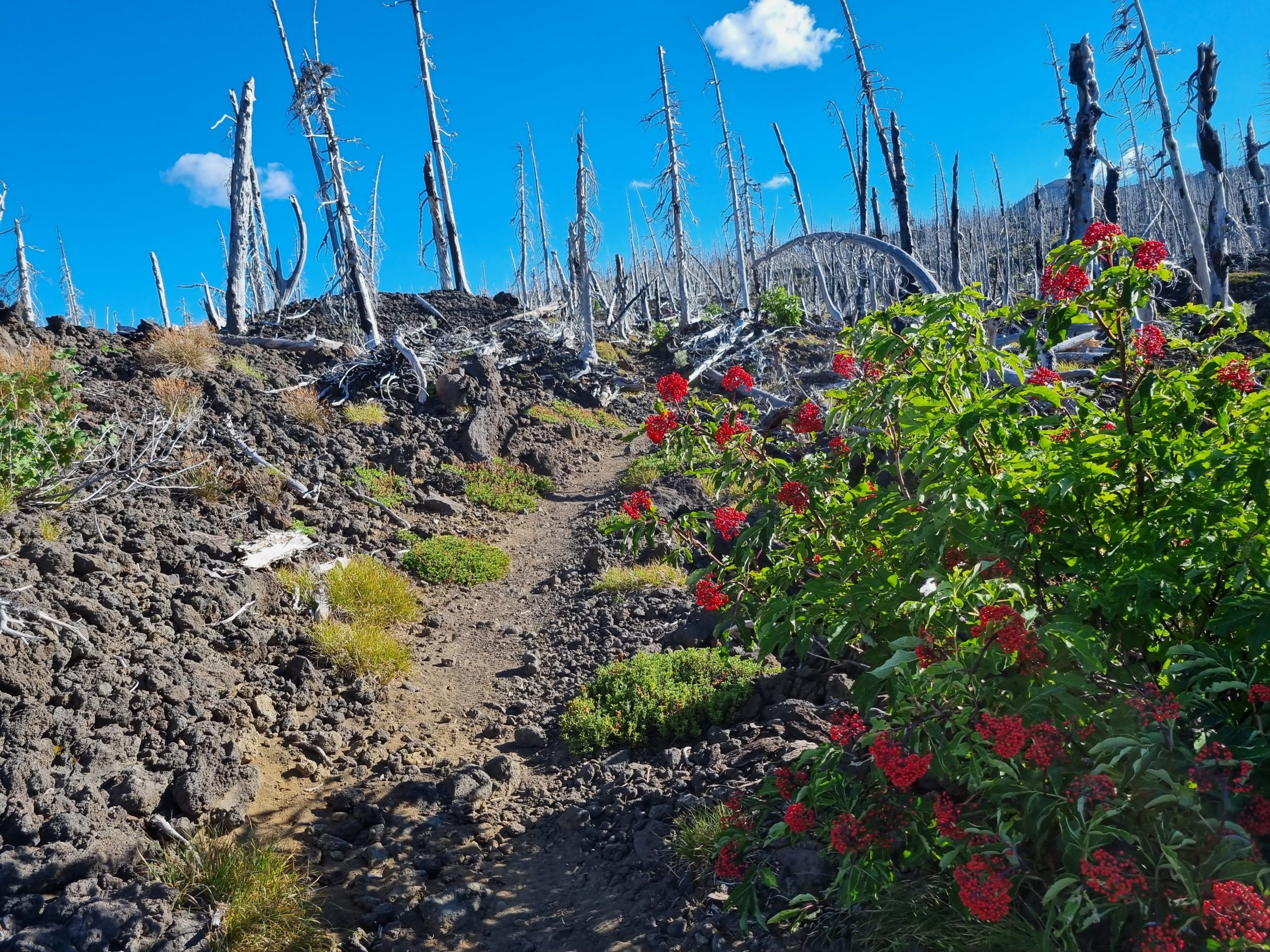 We woke up to a nice view but a lot of sandy condensation. It rained a bit at night which is rare. We had a breakfast and stayed to wait in our free lunch. I did finally my laundry and called to some friends and family. I had a shower and I saw something moving on the shower floor – since I had no glasses on it took a while to realize it was a small frog! It could have fallen off from me, I was so dirty…

When it was time for lunch the disappointment was big when we heard that there wouldn’t be lunch that day. We got some snacks though, but craving for fresh food remained. So we had neroed for nothing and started hiking at 2 p.m. Since there was no water until on a sidetrail in 12 miles we had to do that. In addition to a five days food carry and a huge water carry we had to walk over some huge burnareas and the famous lava fields – both extremely exposed to sun and hot. It was 31 C degrees and I was boiling. Fortunately it was a bit windy.

I lost Skratch out of sight and never saw the guys that started later than me. The lava rocks were really killing my feet and after a few hours I had a nervous breakdown. A NoBo passed by when I was swearing in Finnish and she gave me some encouraging words.

I was listening to some bad eurotechno and it made the hike go faster. The sun was though literally in my eyes (a SoBo cliché!) and I had to wear my black rainskirt as my headscarf. When I ran in to the lakeside still in my sunglasses and headwear though the sun was going down some NoBos were looking at me like crazy.

I didn’t find the Dolphine Gang, probably most of them came in after me and since the camping place was huge it was difficult to find each other without mobile connection. I ate my dinner in dark and enjoyed the starry sky. Since the days are getting shorther we would have many dinners in the dark to come. 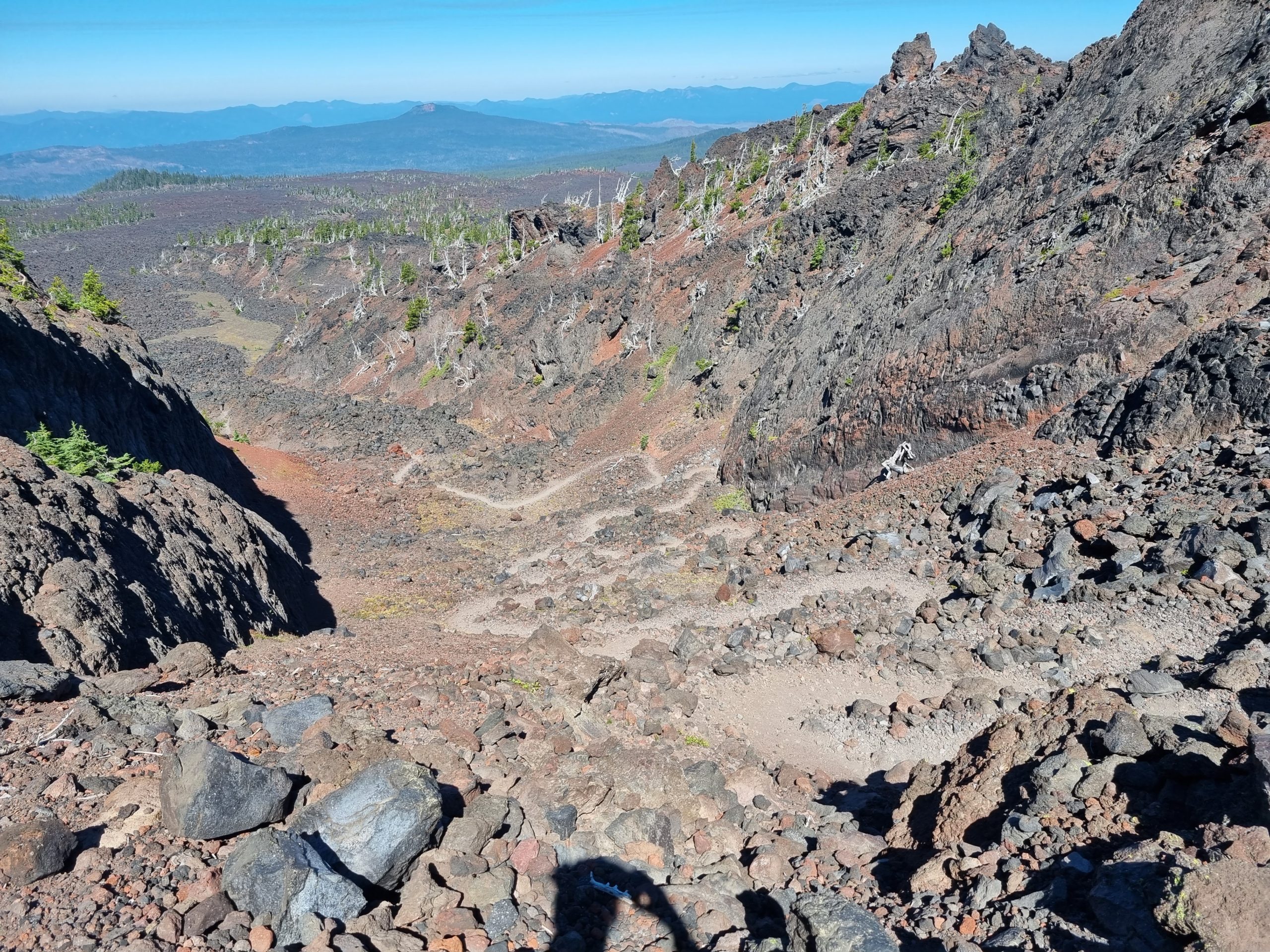 I woke up and saw the tents of the Dolphines on the other side of the lake. I started walking a long uphill in a partly burned forest. There were some lava fields, then some cool alpine landscapes and forests. There were a lot of flowers and streams too.

At some time the Dolphines caught me and we had lunch together. My stomach was not working at all and I was so tired of eating the eternal dry food. In addition I had packed way too few calories for this stretch.

The day got warm althoug the morning had been cold and the lanscape changed to cool big open meadows. The last miles there were even some mosquitoes.

I came to the lake where we were supposed to camp and took a dop. The Dolphines were already camping hidden behind a forest and we ate dinner on a grass almost accidently burning the grass with our stoves. It would be a shame to burn the last part of Oregon that hasn’t burned yet. 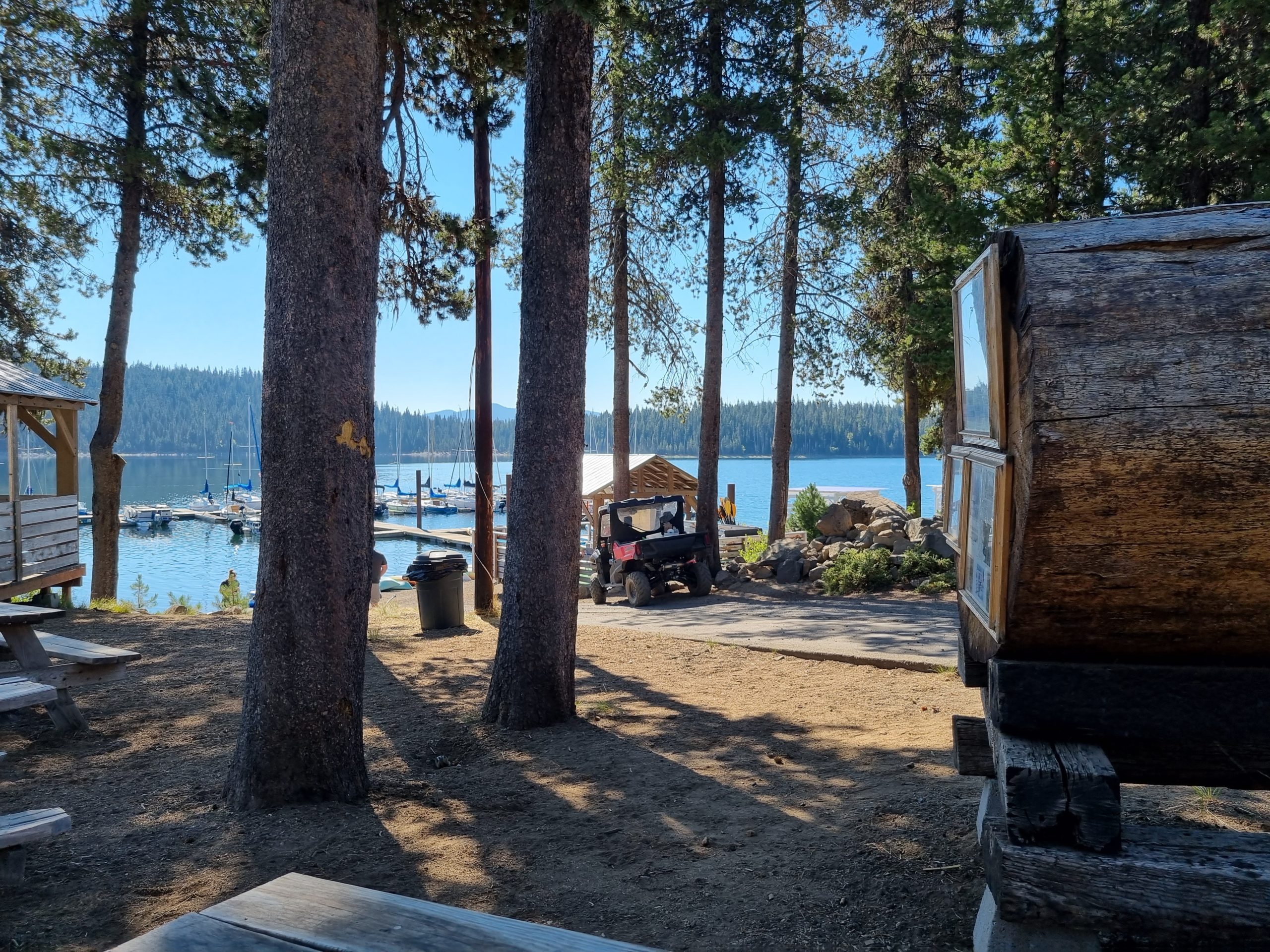 I had a stomach ache at night and was really stressed about my hard stomach problem. When I woke up I noticed that I had my period and that explained the crazy stomach ache. Unfortunately my leggins were all covered in blood, not so much fun in the combination of a bear country and not having possibility to do laundry. You can naturally rinse your clothes in water but that doesn’t necessarily mean they smell clean. Also the tent and my quilt were damp by condensation, a usual problem when camping by a windless lakeside.

I took some painkillers and went back to my tent waiting for them to kick in. I fell asleep and woke up after 7 when Skratch and Croc were leaving. Apparently the whole Oregon is now open, which gave us the difficult question: should we skip some sections volunteerly in order to make it to the Sierras in time?

I walked on quite late, 15 to 8 and saw on Farout that The Elk Lake Resort should have some breakfast. Craving for fibers I decided to take the 1,5 miles extra tour there. Down at the lake it was a disappointment to see they only had vacuum packed pastry and coffee, nothing fresh. I climbed up the hill through a burned forest disappointed, the extra tour having taken more energy than given it, and met up with Poca who decided to go there to try to get lunch.

All day I had awful stomach problems and the day didn’t give much of enjoyment. I probably should have hitchiked to Bend from Elk Lake. Now I’d have to do it from further down to seek help for my stomach and endure 2,5 more days of hiking in hellish pain.

The trail was quite easy but mosquitoes were back in the evening. I was too much in agony to really see the trail. Calculator wrote me and she was almost catching up with me. The 4 Dolphines pushed on a 26 mile day, I couldn’t make it to the same campsite and probably would need to skip Shelter Cove and go to Bend in stead.

I camped by another lake (there are many in this section) but unfortunately it was quite covered with mosquitoes. Also the area is reportedly having high bear activity so I was worried the bear community would rush into my tent invited by the smell of the bloody leggins. 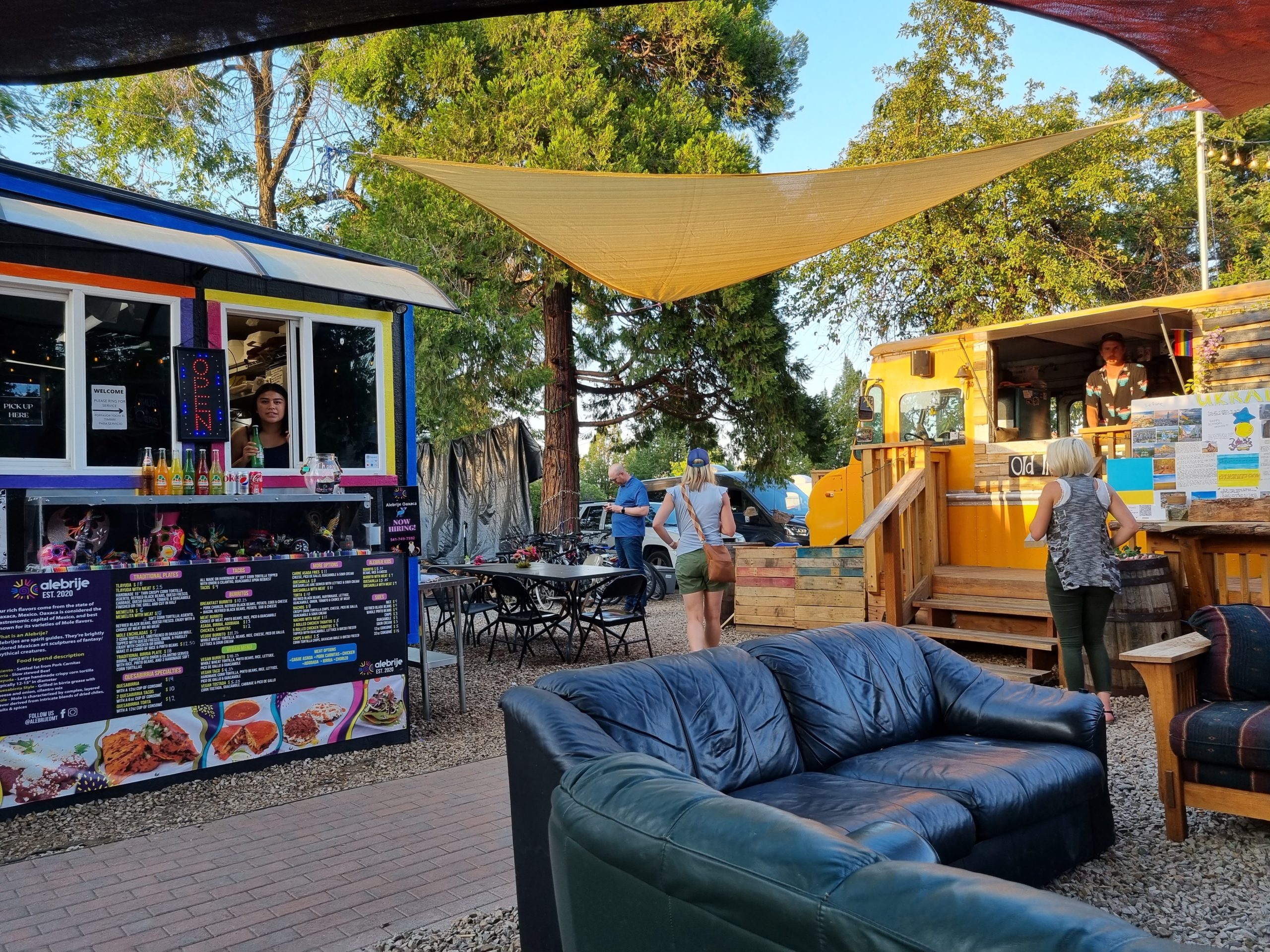 I woke up half past five without bear intrusions and started the hike still with a stomach still not working. I was counting hours till I would be at the highway in 30 miles and could hitch to Bend to sweek some relief to my problem. I was googling a hostel in Bend that has a sauna and booked it for Friday.

After a few hours I heard yelling behind me and it was Calculator! It was the first time we met on the trail since the start. We started hiking together and somehow the hike went so much faster. We were updating each other about the things we had been through on the hike.

Before lunch we had already walked for 13 miles. We could smell some smoke from the fire and I said if I’d have to skip something of the PCT it would be in Oregon since it feels like half of it has burned already. The Calculator was making some calculations and said we should do over 30 mile days if we wanted to get to the Sierras early enough. That solved it, since I never achieved the mythological trail legs I am not able to do several 30+ days in a row, not to mention over 30 of them. I am not doing this hike for some trophy or for somebody else. Every hiking year is different so nobody has to come and tell me I didn’t accomplish what I was going to – my goal was to have an unforgettable adventure and I have surely gained that already.

We took a swim, it was only the second on the trail for Calculator on the trail and for me surely at least the 22nd. We saw suddenly some cars and went to see if I could get a ride. An elderly couple was in fact going to the road and that is when my continuous path from the Canadian border was interrupted. It was kind of sad but I had no choice of continuing without medical help and no time to go all the way after another break.

I got another hitch from a guy with a pickup truck and he talked about living in Montana. Another car picked me soon after and the driver was going to Portland so I got a drive the 50+ miles to Bend. He had interesting stories of loosing his home in a fire and about silent meditation. He drove me all the way to the hostel and gave me some mushrooms. Not sure I’ll smoke them myself but Rebound will surely appreciate them.

The hostel was amazing: a sauna, foodtrucks and beertrucks in the garden and a walking distance to Safeway. They had even karaoke in the garden and somehow they were singing all songs I had been listening to on the trail.

The sauna was heavenly after a couple of months without one. I took some medicin I found in the pharmacist, and halleluja soon my intestines were working again. That feeling can not described in words after a week of agony and pain. I purchased food with a bunch of fibers and fresh vegetables. It is time to change the hiker food ingredients.

I fell asleep with a man singing “New York, New York” below my window sounding almost like Sinatra.