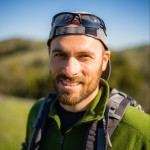 8 Reasons to Start a NOBO PCT Hike in March

On April 4, 2016, my partner and I left the Southern Terminus of the Pacific Crest Trail full of wonder. We were excited for what the trail held in store for us. We were also nervous, not knowing if we were starting too early given the snowpack in the Sierra.

As it turned out, we should have started even earlier.

Before I continue, I want to say that many factors will determine the start date of a thru hike, but for us, as we now know, earlier would have been better.

If we were to hike the PCT northbound again, especially in 2017 with another high snow year, we would choose a start date closer to the beginning of March.

While others continue planning and doing everything necessary to remove themselves from traditional life, you will be hiking. Given the number of permits applied for in early March, chances are you will only run into a handful of hikers each day – if that.

You’ll probably have less crowding at campsites too. In the desert most people camp near water sources. These areas fill up quickly and can get rowdy. 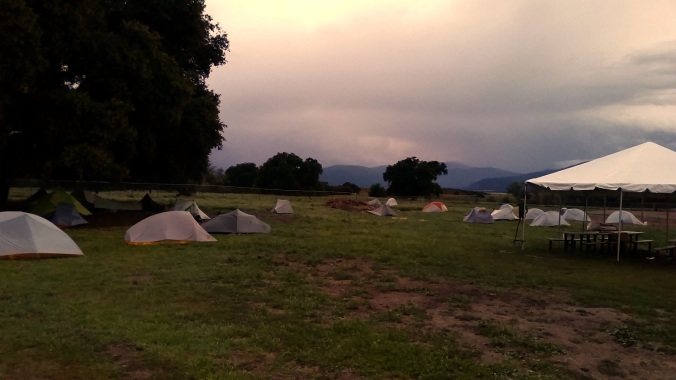 Starting early is also beneficial in towns. Hotels and trail angels will probably have room available to host you. During peak season you might arrive in town, at a hostel or at a trail angels’ place only to find it already at capacity.

When the numbers increase, some trail angels are either unable to keep up or they get burnt out. By starting early and being one of the first people in town, most businesses and trail angels are excited to see you and host you.

On the flip side, by staring early you might miss out on trail magic and some trail angels might still be closed.

2) Less Impact On The Trail

Large numbers of hikers can have adverse effects on the trail and the habitats surrounding it. Setting foot on the trail before 95% of the hikers means you will have less impact on the trail.

Jack Haskel of the PCTA says, “The PCT passes by and through a lot of very sensitive places, and in a lot of ways that’s why we hike, to be immersed in nature and see beautiful primitive wild landscapes.”

With the rise in popularity of the Pacific Crest Trail, starting a thru hike earlier is one of the best ways to help preserve the integrity of the trail and its wildness.

3) Potential for Better Conditions in the Desert

The desert can get very hot – even in April. Starting in March brings potential for cooler weather. And similar to 2016, because of all the rains in SoCal, the wildflowers should once again be spectacular in 2017.

Speaking of rain, the chances of more flowing water in the desert is higher if you pass through early in the season. In years past PCT veterans living in the SoCal desert have hiked sections of the trail early on and have reported more flowing water, which they usually post to the Water Report. 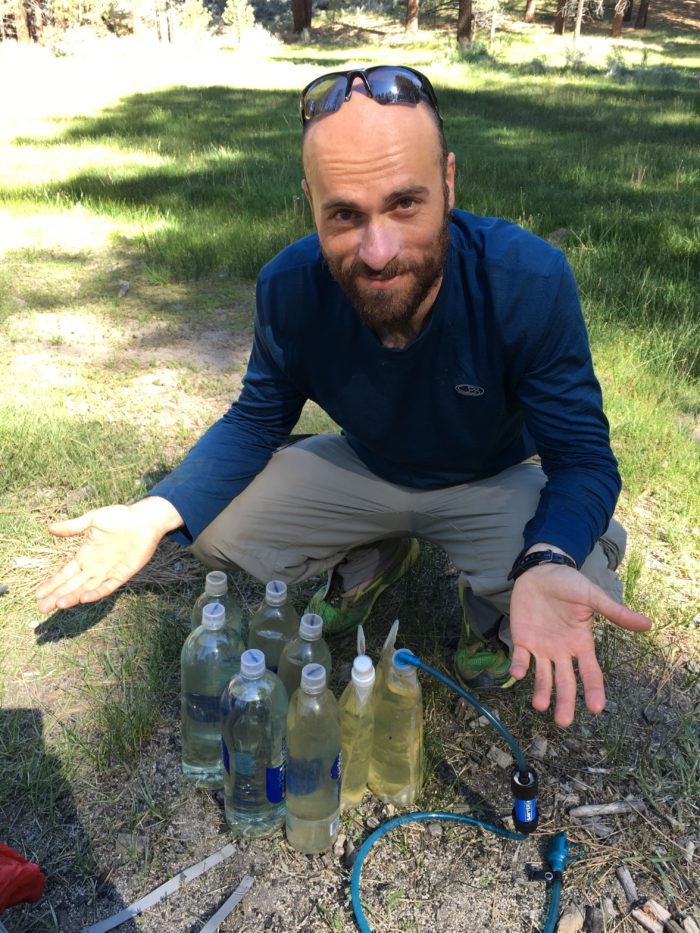 That’s A LOT of water!

Rain in the desert also means snow in the mountains. Unlike many people’s perception of the Southern California desert, there are some really big mountain ranges. The three most prominent being San Jacinto, San Gorgonio and the Angeles National Forest. 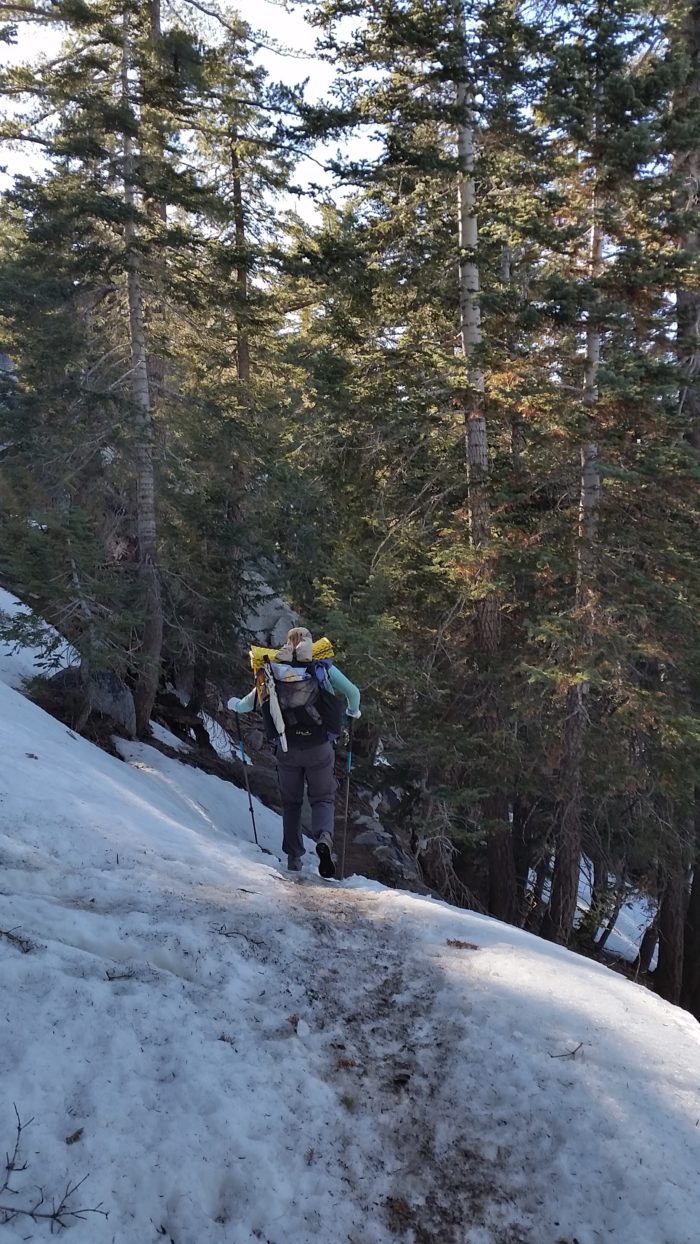 Even in low snow years these mountain ranges can have lingering snow into late May. If you choose to start early, be prepared for snowy conditions and slippery traverses. Be comfortable on snow, take precautions and have traction aids.

But this doesn’t mean you have to hike slow or do low mile days. Having more time can afford you to start slow in the desert, take more days off if needed (in case of injury or blisters) and take side trips.

As I mentioned above however, hiking for an extra month means spending more money on trail food and in towns too. But if you have a plan and are prepared, it shouldn’t put too much strain on your bank account.

5) Passage Through the Sierra Before the Big Melt

Ned Tibbits of Mountain Education speaks of a secret season that’s most suitable to hiking through the Sierra Nevada mountains during an average or above average snow year. The benefits include:

Having said that, the Sierra will probably be very cold and will require:

You will want to have traction aides (we prefer crampons over micro spikes) and a Black Diamond Whippet or ice axe with you and knowledge of how to use them properly. 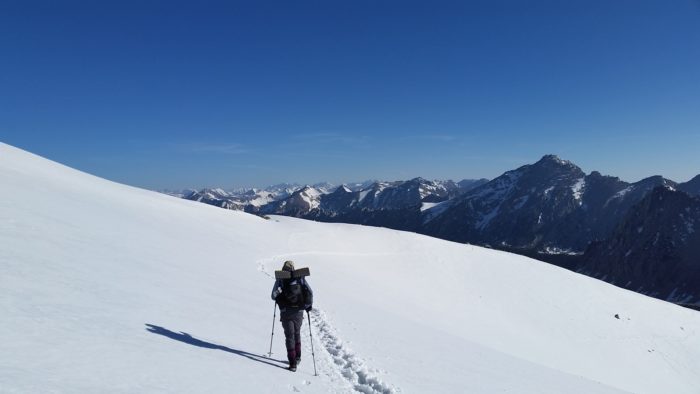 If you encompass the skills required for an early season hike through the Sierra you should have an unforgettable experience.

On the flip side, if you find yourself north of Kennedy Meadows during the thaw, the snow can be tricky and dangerous. And the same could be true for river crossings.

We got caught in a heat wave north of Forester Pass. The resulting thaw elevated rivers by one foot every day, making some of them too treacherous for us. We were comfortable on snow but the river crossings were too much for us. We got off the trail at VVR, skipped 400 miles north, hiked to Canada and then returned to the Sierra to complete our thru hike. Had we started earlier in March, we would have been through the Sierra before the big melt, thus avoiding the scary river crossings. 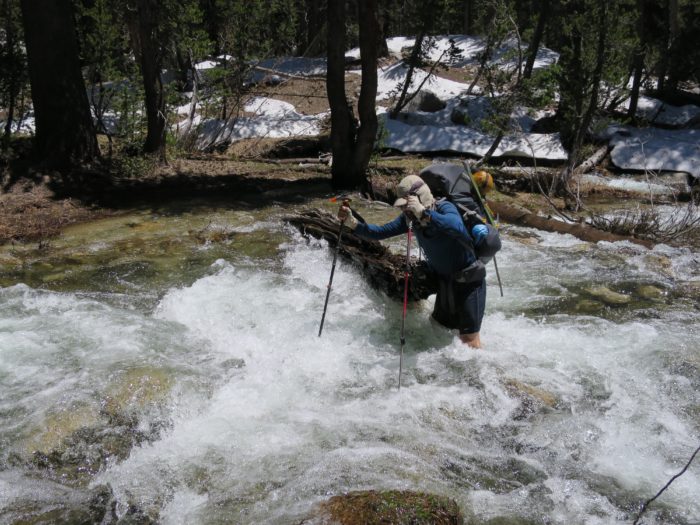 Crossing the South Fork of the Kings River

So when is this secret season you ask? According to Ned Tibbits it’s between April 1st and May 1st. If you start at the Southern Terminus in early March, you should be in the Sierra by early to mid April, during the secret season.

Every year is different and conditions can vary, so please do your homework and make sure the conditions are right for you.

6) Less mosquitoes in the Sierra

The Sierras are a magnificent place and you will want to soak in the views. But if you wait to hike through these majestic mountains in mid June or July, you are likely to be swarmed by mosquitoes.

This usually means walking all day without stopping to avoid the blood thirsty buzzers. But if you start early and go through the Sierra during the secret season, you will be in Norther California by the time the mosquitoes hatch in the Sierra. You will probably encounter mozzies in NorCal and Oregon but this still beats having to deal with them in the gorgeous Sierra.

Starting early and being north of Lake Tahoe by the end of May will keep you on track to follow the wildflowers for the rest of the trail.

Because of our 400 mile skip, we were part of the front runners on the PCT. But we didn’t care about that. What we did enjoy was the companionship of wildflowers – even through Washington in August.

If you love wildflowers, stay on track and enjoy the show. The wildflowers are that great! 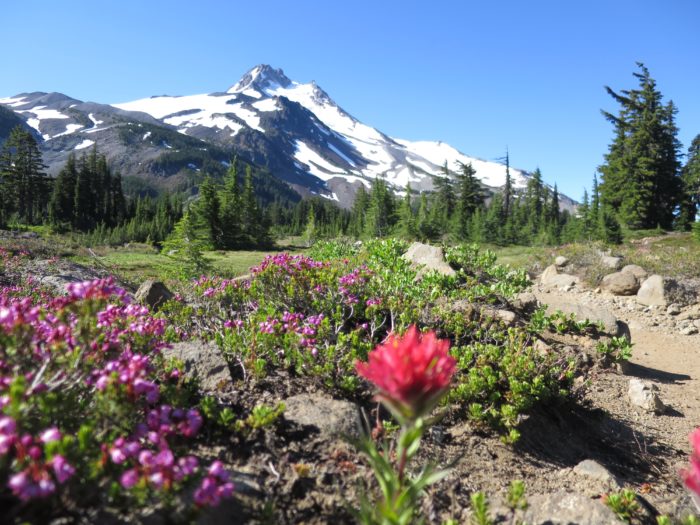 One more thing, hiking early in Northern California, Oregon and Washington will set you up well to hopefully be ahead of the inevitable wildfires. The herd is usually impacted by fire and the subsequent trail closures somewhere along the second half of the trail, but starting early sets you up to miss many (if not all) of them. 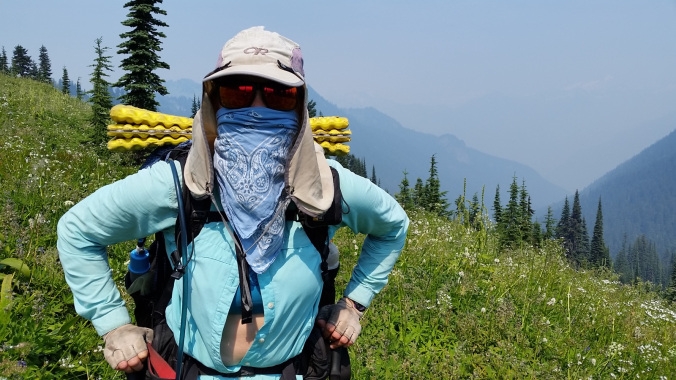 Smoke from nearby fire in Glacier Peak Wilderness, Washington

And lastly, there are places in Northern California and Oregon where snow lingers into May and June (including Plumas National Forest, Etna Summit and the Mt. Thielsen area to name a few), so continue to check the conditions and be prepared.

August is the best month to hike Washington. The simple reason being the weather (read: less rain, more blue skies and stellar views). There are several ways to get to Washington in August. 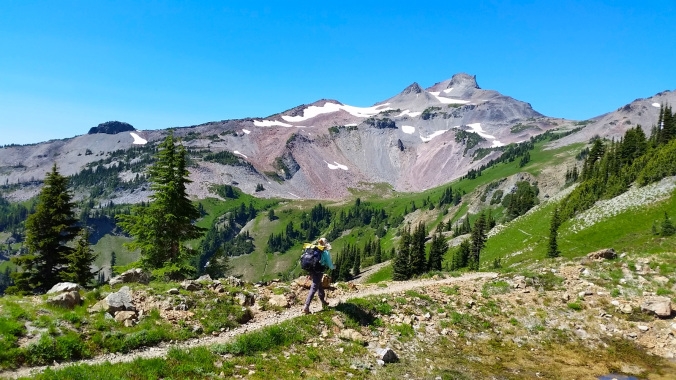 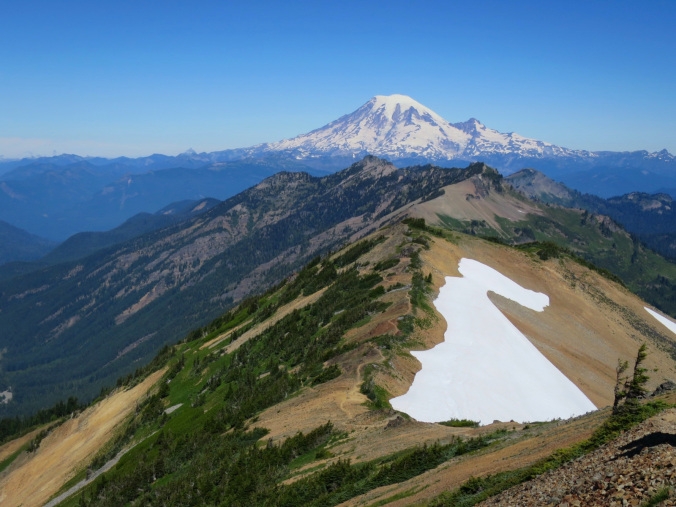 You can start early, skip ahead or hike fast. Whatever mode you choose, I highly recommend being in Washington when the weather is nice. The North Cascades are too pretty to hike through in September (or October) in rain or snow. You’ll spend a lot of time cold, miserable and wondering what views you’re missing out on.

If solitude, favorable conditions and a technical adventure is what you are looking for on a crowded trail such as the Pacific Crest, start in early March. But if you love the comradery of trail life, take comfort in being part of a group, want to be part of the herd or lack snow hiking and navigational skills, start in mid to late April.

No matter how you do it, thru-hiking is an accomplishment you can proudly look back on and smile.

Hi, I'm Andy to friends and family. On the trail I'm Shuffles. I dreamt of hiking the Pacific Crest Trail for 8 years. In 2016 my partner Dribbles and I turned that dream into reality. It was the best decision we've ever made. Follow our adventures on Instagram @yogihiker and at www.andyandlaurie.com