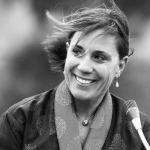 An Epic Day on the PCT

On May 20, we headed out of Tehachapi hiking along then up from Hwy 58. Cool morning, pleasant sunrise, just like most days have been in the desert. We could see in the trail register at the base of the climb, that we were the first hikers to head up early that morning.
My husband, Chris Foster hiked with Froot Loop (formerly Guppy) and me—his plan was to do our initial 2000 foot climb, then turn around and head back down. As we climbed up, the wind picked up. At first nothing more than the strong 30-40 mph winds we’ve had to that point. Then as we increased in elevation, the wind became even stronger and stronger—until it felt like a consistent freight train bearing down on us. I’ve been in many and varied wind conditions and I’ve never experienced anything as strong as sustained as this. I imagined it as a giant invisible Mavericks wave trying to flatten us at every turn.
I was leading the three of us, and at one point I rounded a turn and had to stop and brace my poles and legs to keep from getting blown over. Froot Loop was digging her head into my butt to help my cause and the pressure from the wind blast still made my feet slide backward. For moments on end, we couldn’t walk, just brace.
Inching our way along we came to a saddle that was very exposed to the windward side of the mountain as we tried to step out onto the exposed section it literally flattened Froot Loop and me. We were reduced to crab crawling across the saddle, dirt and rocks pummeling us as the hurricane of wind pinned us down. At one point I glanced back to check on her progress and noticed that she was crawling not across toward me, but rather back toward the abyss! So I jumped up, braced myself, and started yelling for her to stop. She finally saw me and we both stumbled to the other side.
Chris’s plan was to go all the way to the top but I told him to head down once we were halfway up. He had to get down at some point and I was concerned that he was hiking solo down into that wind. He suggested that it was an option for us to also turn around, as we still had a lot of climbing to do and the wind seemed stronger as we went up. I said F-that to that suggestion—we had come this far in this fight and we would carry on. This was not bravado mind you, just a lack of desire to have to repeat our monumental effort later or the next day!
At one point when heading into a particularly steep part of the trail into the funnel of crazy wind I said out loud, “I’m feeling a bit nervous.” I knew that once I let out that sentence I could refocus on what needed to get done. I wasn’t certain if we could get through but I thought we could, and that was enough.
So we carried on, throwing ourselves across the exposed saddles and inching along steep trails, never knowing when the heaviest gusts would land. After a few hours and a monumental effort, we made it to the shelter of trees at the top of the climb. Once the adrenaline wore off, my legs felt shot from fighting the force of the wind, but we managed to hike a few more hours to a protected camp spot.
As Chris went down he came across several more hikers trying to come up. A few of them turned around, a couple already suffering wounds from getting knocked off their feet. Two kept heading up behind us—one shared she had a panic attack on the way up and had to hunker down and mentally regroup, the other said it was the most terrified he’s ever been. That evening after the ordeal was over we jokingly called ourselves the PCT Hurricane Survivors.
Once we got to a protected area. I texted down to friends still in Tehachapi and suggested they may reconsider coming up that day. Many stayed put, once word got out of the insanity.
Once down, Chris checked the wind forecast for that day. The winds were steady at 50 mph gusting to 70 mph. Holy crap.
Needless to say, I have no photos of that section of trail, but will definitely not need them to remember that day!
Onward to Kennedy Meadows,
Wolverine
< Previous Post
Next Post >