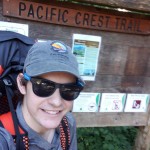 Back to the Trail… Again

Climbing Out of Paradise

After almost three weeks off, I finally hit the trail again. I started where I had gotten picked up, Paradise Valley Cafe. I knew that water was going to be less frequent on trail between the cafe and Idyllwild. It was a hard day of constant uphill hiking but I stopped at a little oasis of cedar trees and a spring. It was a mile side trail but totally worth it. 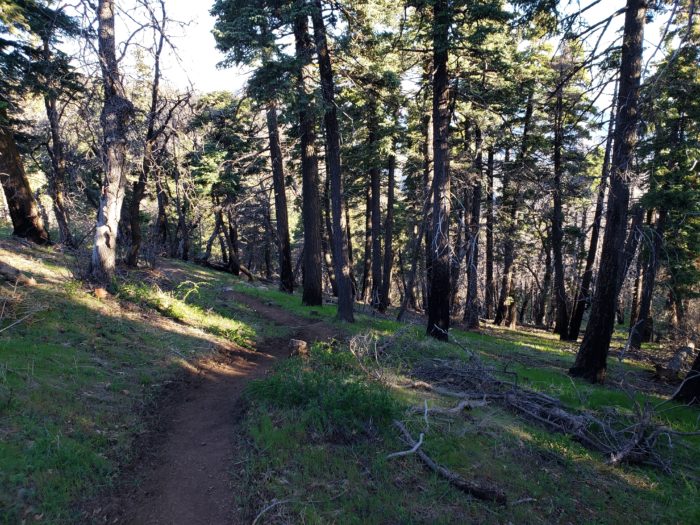 The next day I woke up and powered up some more hills. I crossed the Apache Peak section of trail that had been really sketchy a few weeks before. There was only one tiny clump of snow before the heat and poisonous poodle dog bush resumed. This section of trail hadn’t been open until this year after a recent fire.

As I hiked closer to San Jacinto, I encountered more patches of snow but I never needed to put my micro spikes on. One of the best things about the snow is that it creates beautiful creeks of snowmelt. I found a creek of crystal clear, icy water just gushing out of the side of the mountain. I found a perfect campsite very near Saddle Junction. From there, I would use the Devil’s Slide trail the next day to get to the town of Idyllwild. It had been an eighteen mile day that really wore me out thanks to all of the climbing. Being just a few miles from real food was serious motivation. 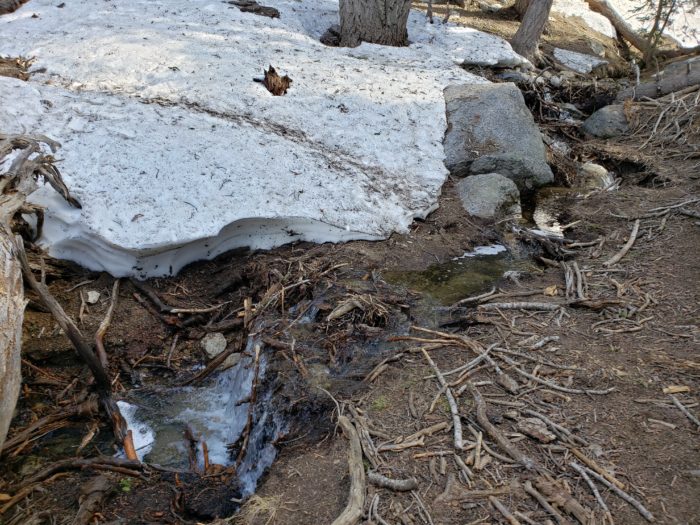 The next morning I met up with a group of four hikers at Saddle Junction and headed down the Devil’s Slide trail. I had hiked this same trail many years before. We reached Humber Park and got a hitch almost immediately. Our trail angel told us where eveything was in Idyllwild and which grocery stores and restaurants were cheaper and where to find the best coffee. We took his advice and headed straight for one of the coffee and bake shops. 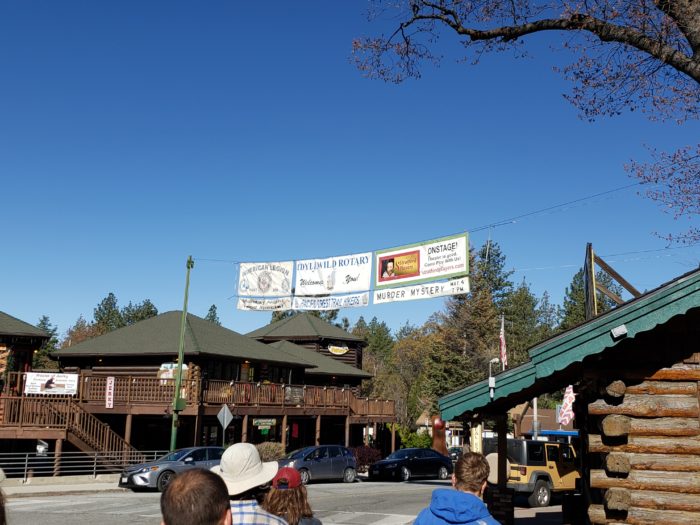 Eventually we made our way to the large campground on the edge of town. They allow PCT hikers to camp in a group campsite for just five dollars a night. We pitched our tents and set about doing typical town errands like showers, laundry, raiding hiker boxes, and relaxing. I went with the same group to lunch at a vegan restaurant and got to sit and eat on a lovely patio.

That evening we stumbled across the mayor of Idyllwild. It was explained to us that Idyllwild had no desire for human politicians so the actual mayor is a super friendly golden retriever named Max. 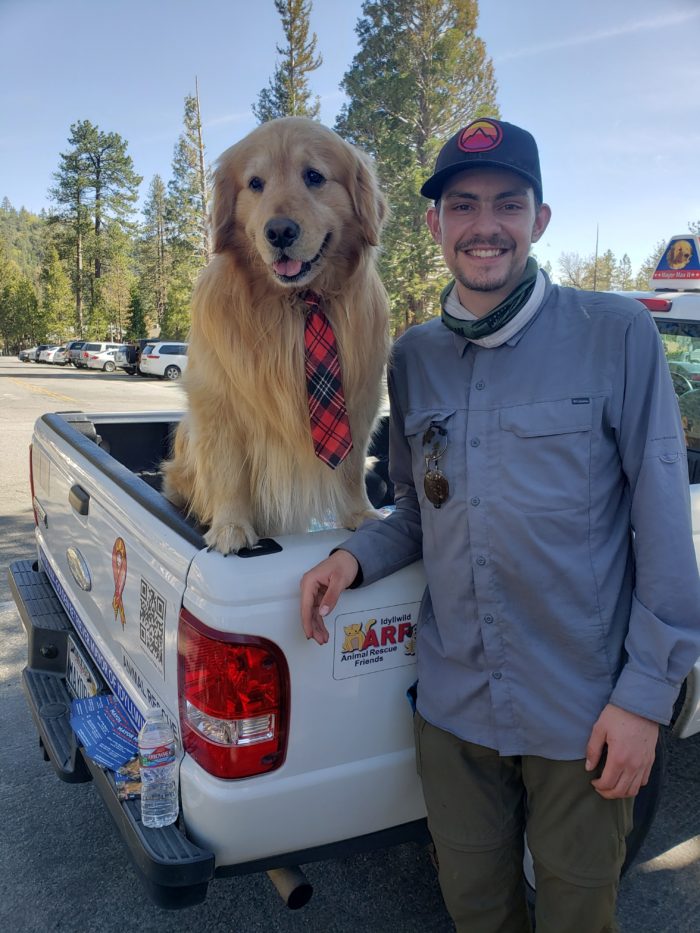 After bagels, snacks, and beer for dinner back at the campground, I spent the evening talking to tons of hiker trash and exchanging stories from the trail. I found that maybe half of the hikers had actually hiked down the Devil’s Slide trail into Idyllwild. Many had just gotten a hitch into town from the Paradise Valley Cafe.

I had already planned to take a zero day in Idyllwild so the next day I got to sleep in. My goal to not spend too much money in town motivated me to finish the food in my food bag rather than go out to breakfast. To be honest I didn’t need to go out at all. The campground was full of generous people and their leftovers which were brought to camp frequently throughout the morning. Everything including pancakes, chips, cookies, and even a box of fancy doughnuts were shared amongst the hikers. Trail magic even shows up in town sometimes.

After a huge milkshake and a resupply from the supermarket I was feeling pretty good. My plan was to hitch out the next morning and return to trail but I was nervous. Weather was coming in but I had planned to meet my mom a few days later at the I-10 underpass. I also needed to time my descent of a section of trail known as Fuller’s Ridge so that I would cross it in the morning when the snow wasn’t slushy. It was clear to me that I had to head back to the trail the next day.

I spent the evening socializing in camp again and was the only American at the table. The trail amazes me sometimes with the experiences it provides. I found myself sitting at a picnic table in a small town in California drinking schnapps and vodka with a large group of European hikers.

Back to the Trail

The next morning I was packed up and ready to go early. But there was a problem. I had no idea how I was going to get back to the trail. The Devil’s Slide trailhead was several miles away so I was planning on trying to get a hitch. I found myself in the middle of town sitting on a wall trying to figure out a plan, when I was suddenly approached by a man. He asked me what I was doing and I told him I was trying to figure how to get back to trail. As it turned out, I was talking to a famous trail angel named Grumpy. He had seen me and figured I was in need of some assistance and offered to drive me right to the trailhead.

After climbing two and a half miles back to the PCT I set out to get as close to the top of Fuller’s Ridge as I could. There were patches of snow on trail and I got to try out my microspikes for the first time. 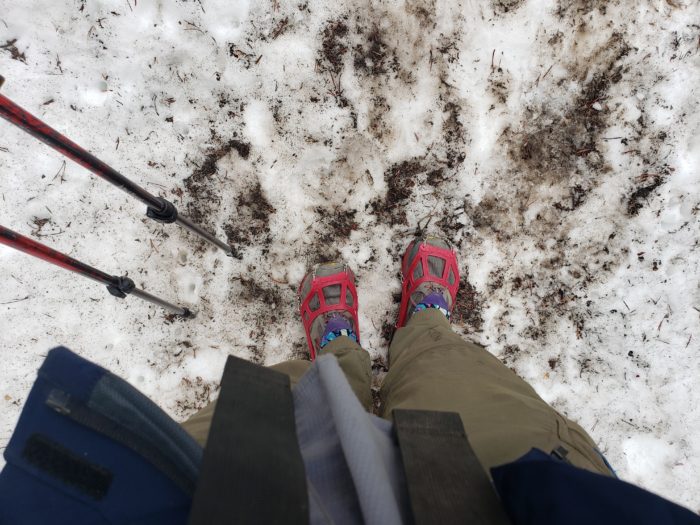 I arrived at the place I wanted to camp at for the night but it was still early and it looked like the weather might hold off a little longer so I pushed on. But as I climbed in elevation, the weather quickly changed. It was soon starting to hail on me and I made the decision to turn around and find a place to camp a little lower. I didn’t make it very far. The temperature dropped and it began to snow on me. Luckily, I came across a very large boulder that had some overhang that I could hide underneath.

While I was off trail, I purchased a bivy sack to try out instead of my tent for the next week or two. A bivy is kind of like a miniature tent that just goes over your sleeping bag and head. Crucially, it wasn’t very tall and I was able to set it up under the over hanging rock. I spend the next eighteen hours under that rock. I ate and watched it snow while staying mostly dry. It was a long and cold night but I made it through. 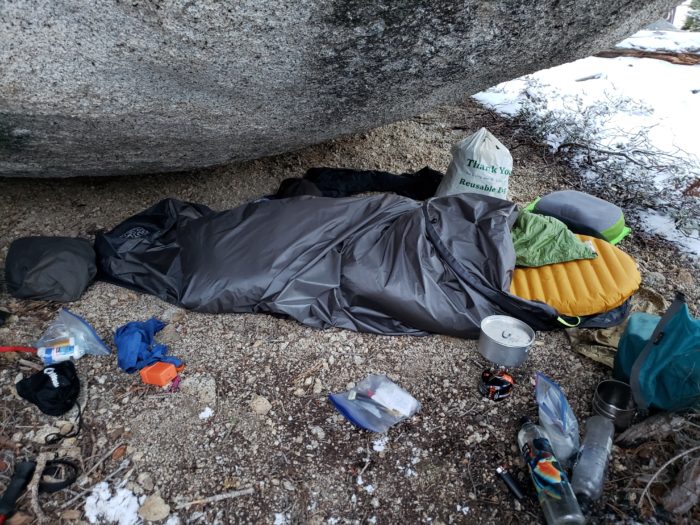 The next morning I had a new challenge. I had to find and follow a trail that was concealed under fresh snow. It was slow going but eventually I made it to the top of Fuller’s Ridge. Following footprints led me off trail several times as I traversed the snowy slope. I fell many times and would sometimes begin to slide down but was lucky to always have a tree of branch to grab onto and stop my fall. It was the scariest part of my hike yet. But like with the cold the night before, I made it through. 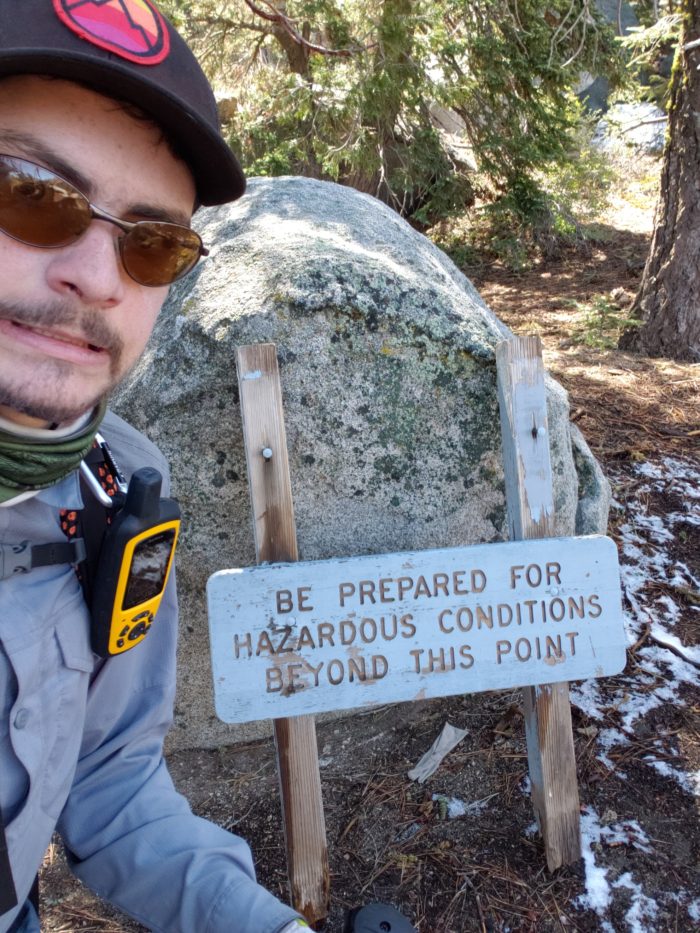 Section B of the PCT offered tons of challenges but some absolutely beautiful views and wonderful times.