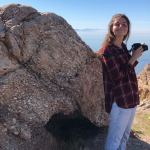 Right before leaving the desert and entering the long-awaited Sierras, a trail angel named Coppertone told me, “don’t be stupid, but don’t be afraid to challenge yourself out there.” 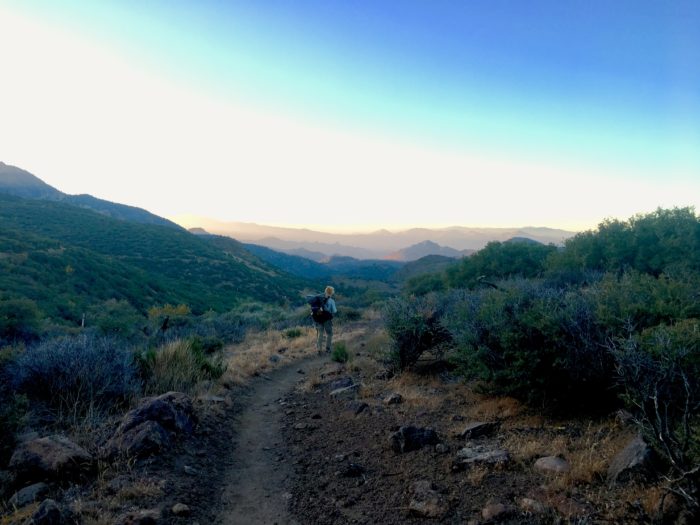 This year record-setting snow levels blanket the Sierras. As the temps have started rising and the snow pack has began melting, the rivers are roaring. Truly roaring. Massive white caps, crazy-fast under currents and all. Everything seems especially wild out there. The magical snowfall has made it unbelievably beautiful, but it’s also a bit spooky.

At least I was a little spooked, but not so much of the snow. I went into the Sierras without ever wearing microspikes and 90 miles later, putting on my micorspikes is as normal as putting on a pair of socks. I’m comfortable using an ice axe and I even learned to self-arrest. The snow slowed us down (so much that 30-mile days turned into 15-mile days), soaked my feet at all times, led to many slips and slides and tumbles, and made me hike off-trail more than on trail since it was so hard to follow. I could deal with all this though. I could even deal with postholing, when my leg would sink thigh-high into the snow. We took a detour to climb 14,505-foot Mt. Whitney (the tallest in the contiguous U.S.) to watch the sunrise on the peak. We also climbed over the Forester Pass, the tallest point on the PCT at 13,153 feet and glissaded down the other side. No problemo. 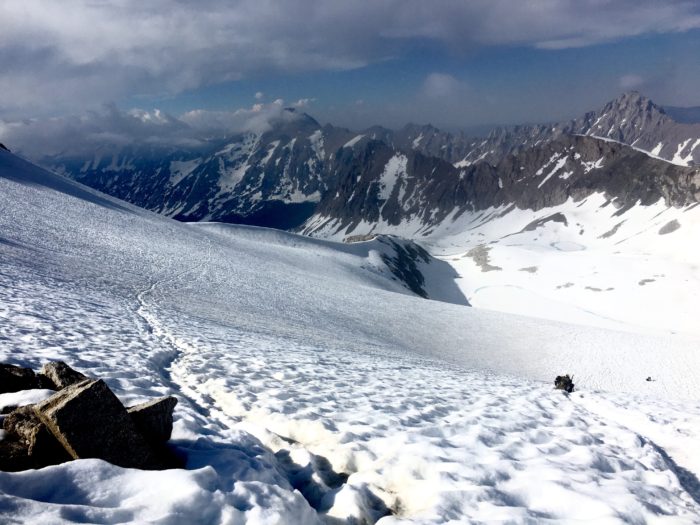 The rivers were too much for me though. I’m a confident floater and water-treader, but I don’t know how to swim (ironic since my 12-year-old bro is a swimming national champ). I crossed five tough rivers. Spooky rivers. All were waist-high. One was nearly chest-high. You could hear them from a mile away. My heart would start racing as soon as I could hear that ruthless river roar. Safely crossing these rivers involves shuffling across in a squat position directly facing the current. My trekking poles vibrated with the strength of the current and I’d always repeat to myself, “Jackie you are strong” until I made it across. One of my hiking pals, “The Kid,” took a swim a couple of times, and one of the rivers whisked another hiker 200-feet downstream. 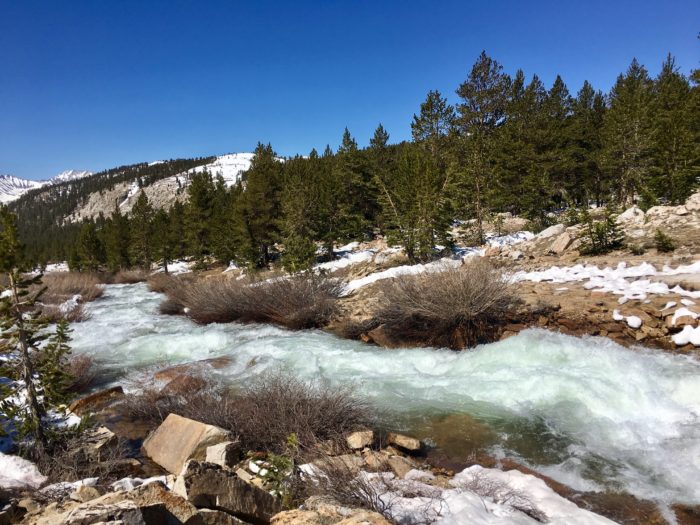 When I was in tough situations back in the dry, dry desert (dehydration, sleeping in windy dust bowls and waking up with ears full of sand, hiking 10-miles through swarms of biting flies, etc.), I’d tell myself “embrace it or go home.” I never had any doubts. Of course I’d embrace all of that, even the flies that I despise. But I couldn’t embrace those rivers. They weren’t enough to make me want to go home, but they were enough to make me want to skip around the Sierras. So that’s what I’m doing: hitching around nearly 400 miles of trail… and the most beautiful miles of the entire trail at that. 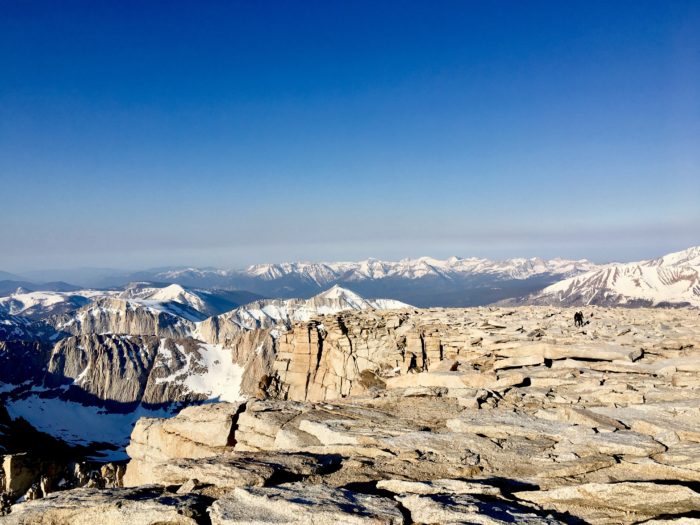 I’m bummed about it, even though I know it’s the right decision for me. But the hardest part of it all is saying goodbye to an incredible trail family: Mittens, The Kid and The Gent. Mittens and The Gent are continuing on, and The Kid is hitching to a different section of trail.

It’s ironic because one running joke among our trail fam was that I am awful at saying goodbyes. (One example: “See you up trail! Maybe. Hopefully. I don’t know.” The people I said this too didn’t even say anything back, they just walked away. Awkward). Mittens and The Kid coached me on how to say solid goodbyes. Like “take care” or my personal favorite: “I love you, have fun, be safe.” But then I had to say goodbye to a dear trail family and three people who mean a lot to me, which is something they never coached me in. Good thing I was in a rush and had a bus to catch, otherwise I could’ve sobbed.

So here’s to Mittens: one strong, brave, badass lady (sorry for the language, mama). The first day we met (about a month ago), she helped me tend my nasty blisters, and she’s been there for every blister and every second since. Thank goodness we already have a trip planned to backpack in Morocco’s Atlas Mountains together. 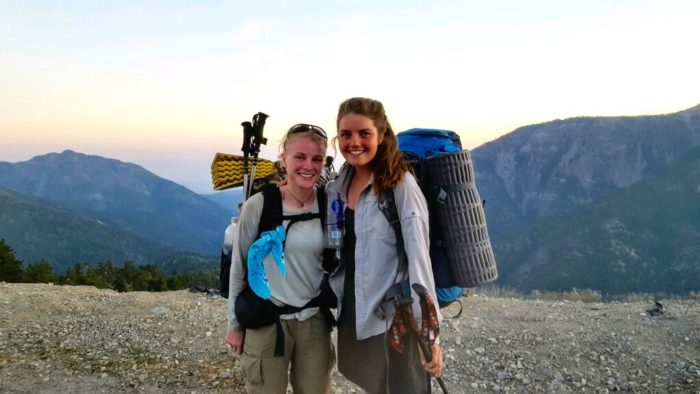 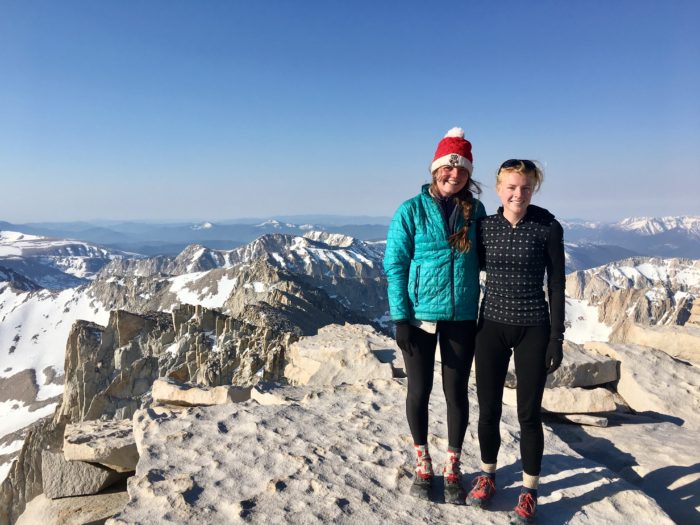 And here’s to The Gent taught me more than I can process about mountaineering, scrambling up rocky mountain faces, safely glissading, washing sleeping bags, and even about wheatwine (who knew that even existed!). 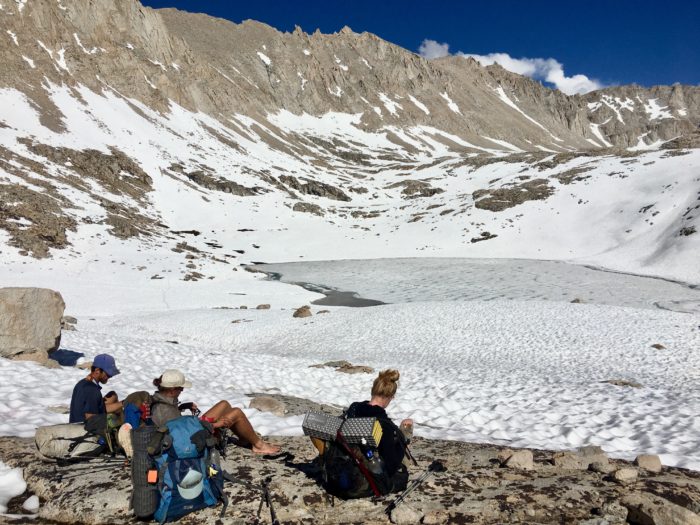 The crazy thing about trail friendships is you never really know when the goodbyes will hit. A week and a half into my hike, I shouted, “see you up trail!” to my friend Henry (now known as Happy), and I haven’t seen him since. Similar to that, I didn’t know I’d be saying goodbye to this trail family so soon. Too soon. Everything is so uncertain out here.

But that’s life, right? One big lesson I’ve learned over the past year is that life is unpredictable. It’s a roller-coaster, similar to this crazy trail. You may think life is going in one direction. You may have it all planned out, but things change and plans change. So cheers to my new plan: one without intense river fording.

I’ll see you later, Sierras. Maybe later this season. Or maybe another year after I take some swimming lessons from my little bro. Who knows. 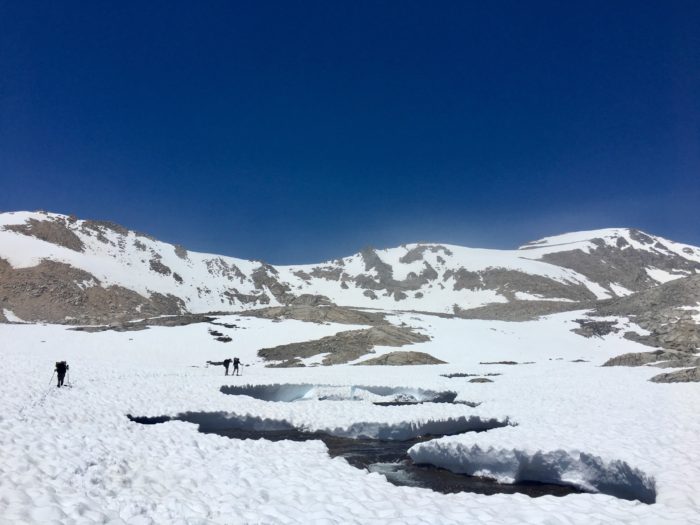 I'm Jackie. I'm attempting to thru-hike the PCT this summer. I just graduated from UW-Madison, and I hope I can find as much cheese and love on trail as I did in good ole Wisconsin.