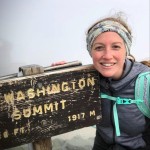 I am always up early, but especially on town mornings. It’s a mostly downhill cruise to Kennedy Meadows. Kennedy Meadows, the end of the desert, gateway to the Sierra… it barely feels real.
I’ve been hiking half an hour when I hear rapid footsteps behind me. It’s Tesla and Vulture, literally sprinting. I dodge out of their way and ask if they’re being chased, but they just laugh and joke they’re going to run all the way to town. Moments later, Jackrabbit appears.
“I’m trying to hike four miles an hour,” he explains hastily. “Tesla and Vulture have never been passed, and when they realized I was going to pass them, they started running.”
I was already feeling proud of myself for walking three miles an hour, so I just shake my head as all three are soon out of sight.
The Second Breakfast Club regroups at the 700-mile marker for photos, and we’re still hiking together when we reach the road. The desert is over.
It’s a short road walk to the Kennedy Meadows General Store, where the hikers who are already assembled applaud at our arrival. I knew about the tradition, but it still feels surprising and delightful.
After we eat lunch, we take a shuttle to Grumpy Bear’s for our zero. For dinner, we eat overpriced pizza and beer, playing Jenga with Wildcard, Leaky, and Vulture. After dinner we walk back to the camping area, and it’s the first time I’ve used my headlamp since the aquaduct. It’s June now. The days are long, and I’ve never been less nocturnal.

Today we hear rumors of norovirus in this bubble, and we take extra care to wash our hands. I am suspicious of every grumble and growl from my gut after I devour an enormous plate of pancakes, but I feel fine. In retrospect, we’ll realize that norovirus was not the illness to worry about. 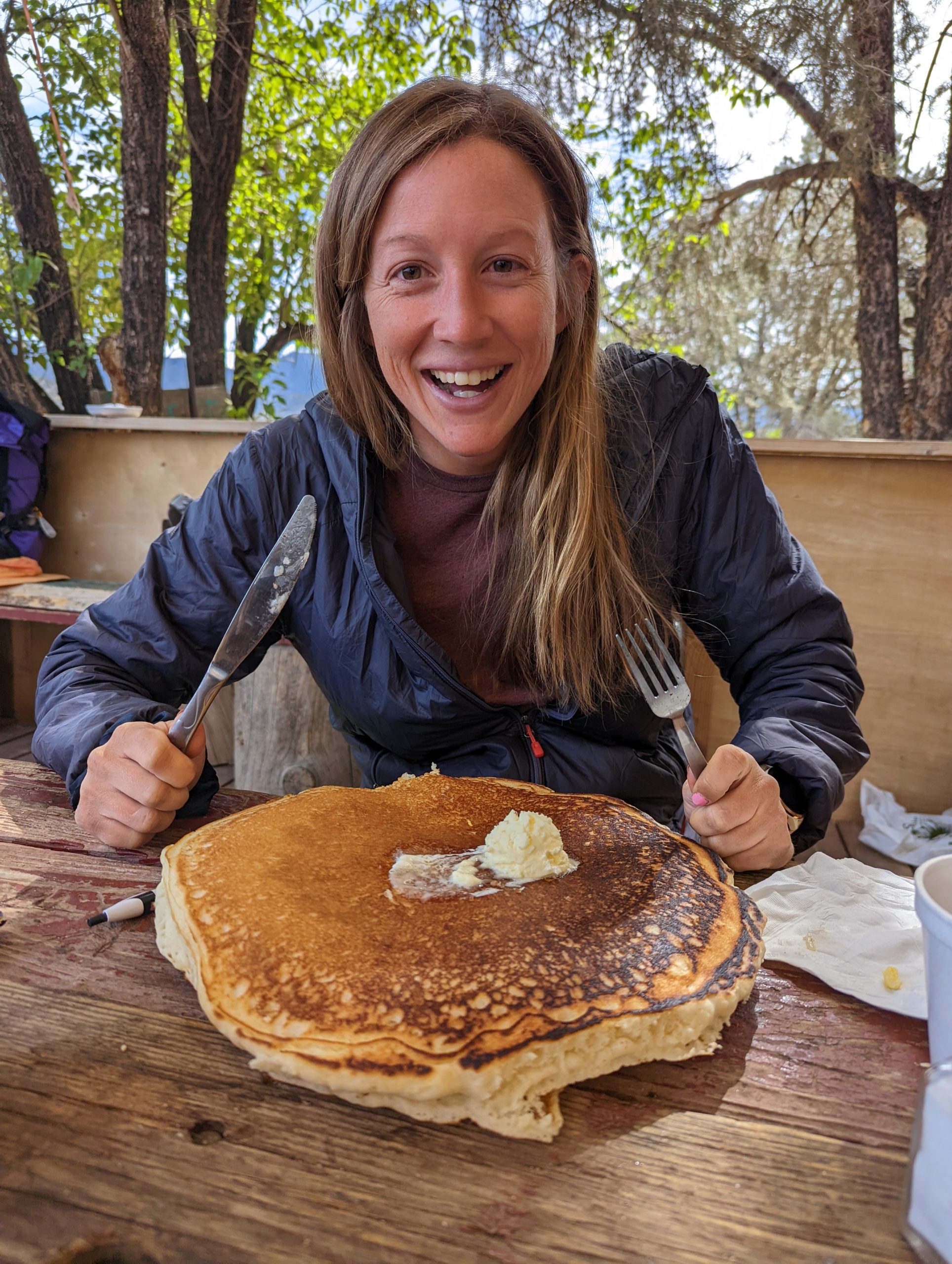 I expected the Sierra to begin gradually, but suddenly we’re here. It’s a gentle uphill all morning, then steep in the evening. The mountains are tall and craggy, the forest made up of pines instead of Joshua Trees. 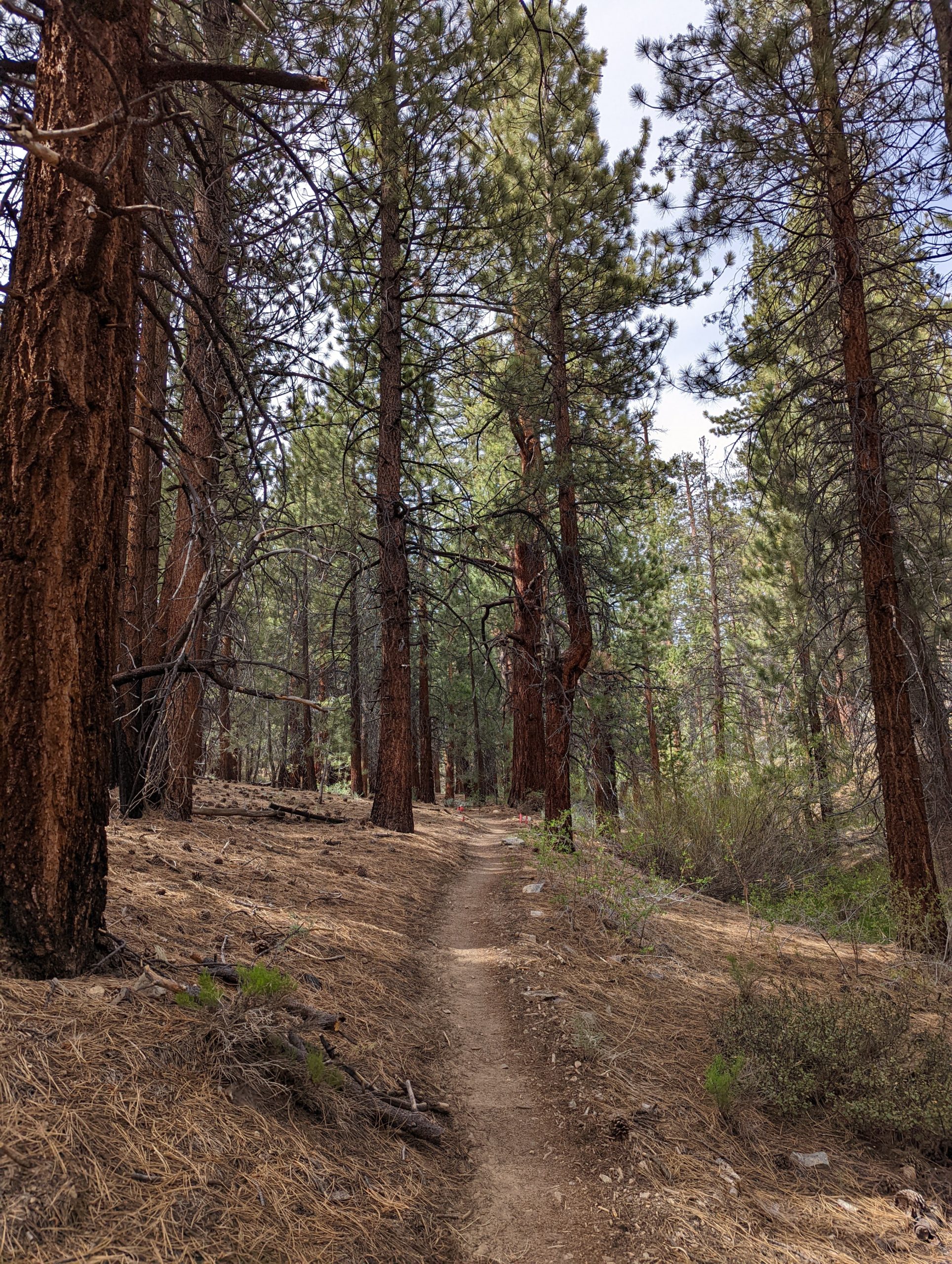 We cowboy camp, knowing we might not be able to do so much longer. The mosquitos of the Sierra are notorious, but here at least, they aren’t bad. We are joined by Red Panda and Feathers. Red Panda’s knee is hurting, so I pass along the knee brace that I’ve been carrying since Wrightwood, when Jackrabbit gave it to me. My knees have been fine lately. I cross my fingers my luck will continue as the mountains get steeper. 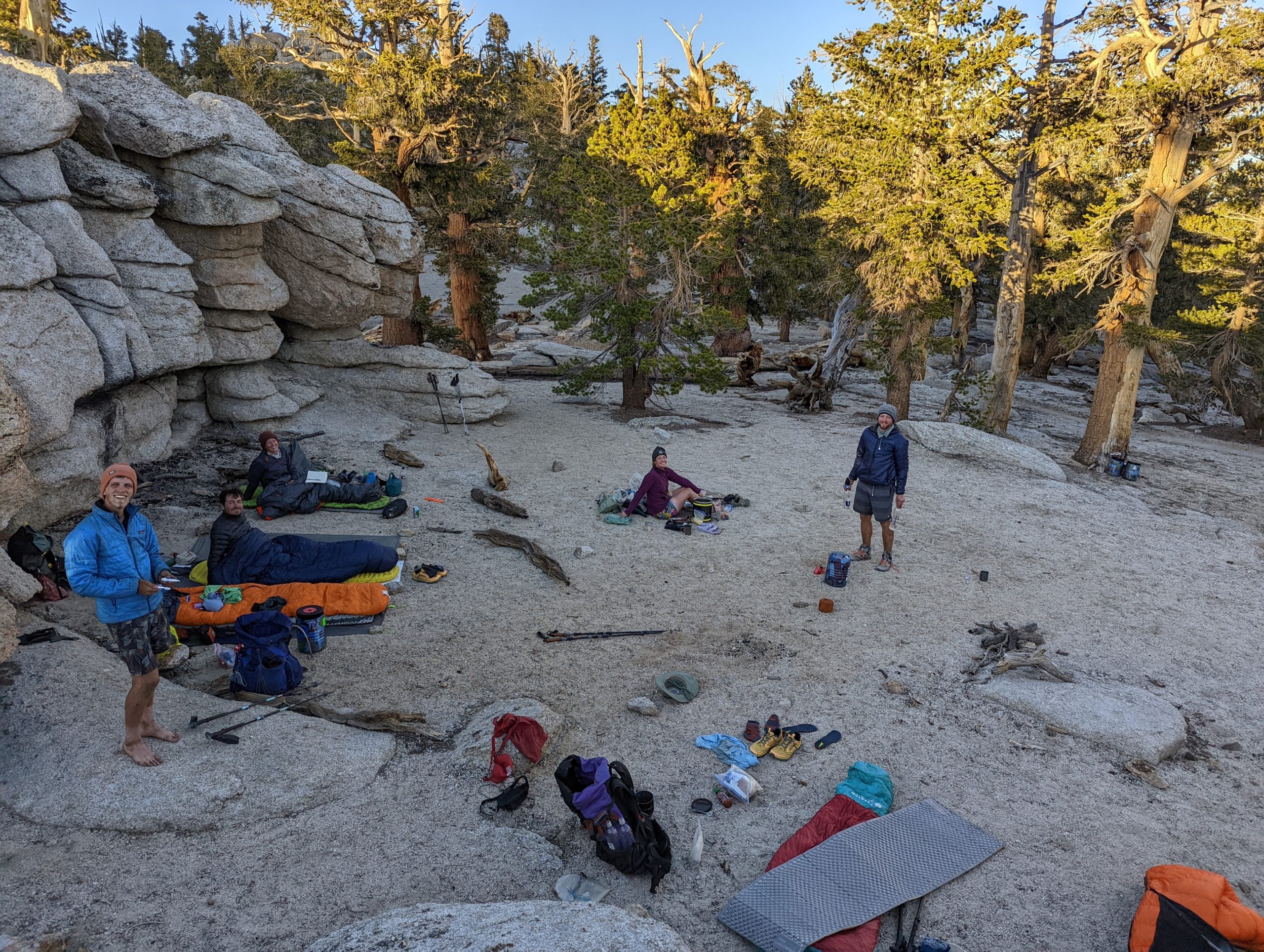 The wildlife is different, too. I’ve seen dozens of chipmunks, and today I see a woodpecker. No marmots yet, but JMT-alum Billie Goat assures us that they’re coming.
After an easy downhill cruise in the morning, we resume climbing. We’re at altitude now. I still feel fine, possibly just a bit more tired from the uphill than in the low desert. Of course, my bear cannister and 7-day food carry are also making my pack heavy.

Chicken Spring Lake is the first alpine lake on the PCT. We arrive there for second breakfast and strip naked and wade in, yelling and squealing. I do it before I can second-guess it too much, and it’s as fun and freeing as it is mortifying. The water is, predictably, cold. Nonetheless, as soon as I’m back in my clothes, I feel good.
The afternoon is hard. I feel a little guilty– I was the one to persuade the others that we should get to Whitney in three days instead of four– but we arrive at the Crabtree cutoff on schedule to climb Whitney for sunrise. We’re exhausted, and the ascent is already daunting.
Then, our plans are further complicated when a woman at the junction is suffering from symptoms of altitude sickness. Captain Something (Becky has a trail name now) goes into doctor mode, and she assesses the woman. There’s no immediate danger, but she asks us to find her friends and alert the ranger. Captain searches Crabtree for the other hikers while I drop my pack and jog up to the ranger station. The building is still boarded up, with no ranger on duty. When I find Captain again, we decide to hike up to the other campsites toward Guitar Lake to check there. Unsuccessful, we return to Crabtree. By now, we’ve done well over a mile of extra hiking, and Captain Something decides to return to the junction to camp with the woman. It’s already 7 p.m., and we agree that we’re not waking up at 2 a.m. for a sunrise summit. We’ll meet at 5 a.m. instead.

My alarm goes off at 4:30, and I swiftly pack up. I only need food and some layers, so I stash the rest of my gear in Captain Something’s tent (the sick woman’s friends had found her after all, so Captain came back last night, finally getting to bed well after sunset). Rookie is with us– he’s been feeling the altitude, and his asthma is acting up as well, so he also wasn’t up for the 2 a.m. start. Jackrabbit, Billie Goat, and Poseidon are already somewhere on the mountain.
The first few miles up to Guitar Lake are easy. Then, the switchbacks begin. This is the highest elevation I’ve hiked at since Toubkal in Morocco in 2017. Like then, my body seems to be handling it well. The extra exertion is counteracted by the absence of a heavy pack, so I feel pretty normal. Rookie is struggling, and eventually he decides to turn around. It’s surprisingly sad to leave him behind, but we think of the thru-hiker who died of HAPE just two weeks ago and agree he’s making a wise decision.
Captain and I proceed up the mountain, and soon we begin to see familiar faces on their way down. Tesla, Jackrabbit, Billie Goat, Poseidon, and Feathers are bundled up in all their clothing after freezing at the summit during the sunrise. They seem utterly spent, but they’re smiling. “Enjoy,” they say. “It’s amazing up there.”
As we cross the ridge and pass craggy spires, we find Leaky, who explains that she took a head start and Wild Card is somewhere behind, aiming to catch her at the summit.
It’s mid-morning when we get to the summit. I’m sure sunrise was beautiful, but this feels like the perfect moment to be here. It’s remarkably still– only the tiniest breeze shifts the thin, sun-warmed air. Vulture is here, with another hiker we met at Grumpy’s named Pinch. Soon, Leaky and then Wild Card arrive. They know Pinch from the Te Araroa. 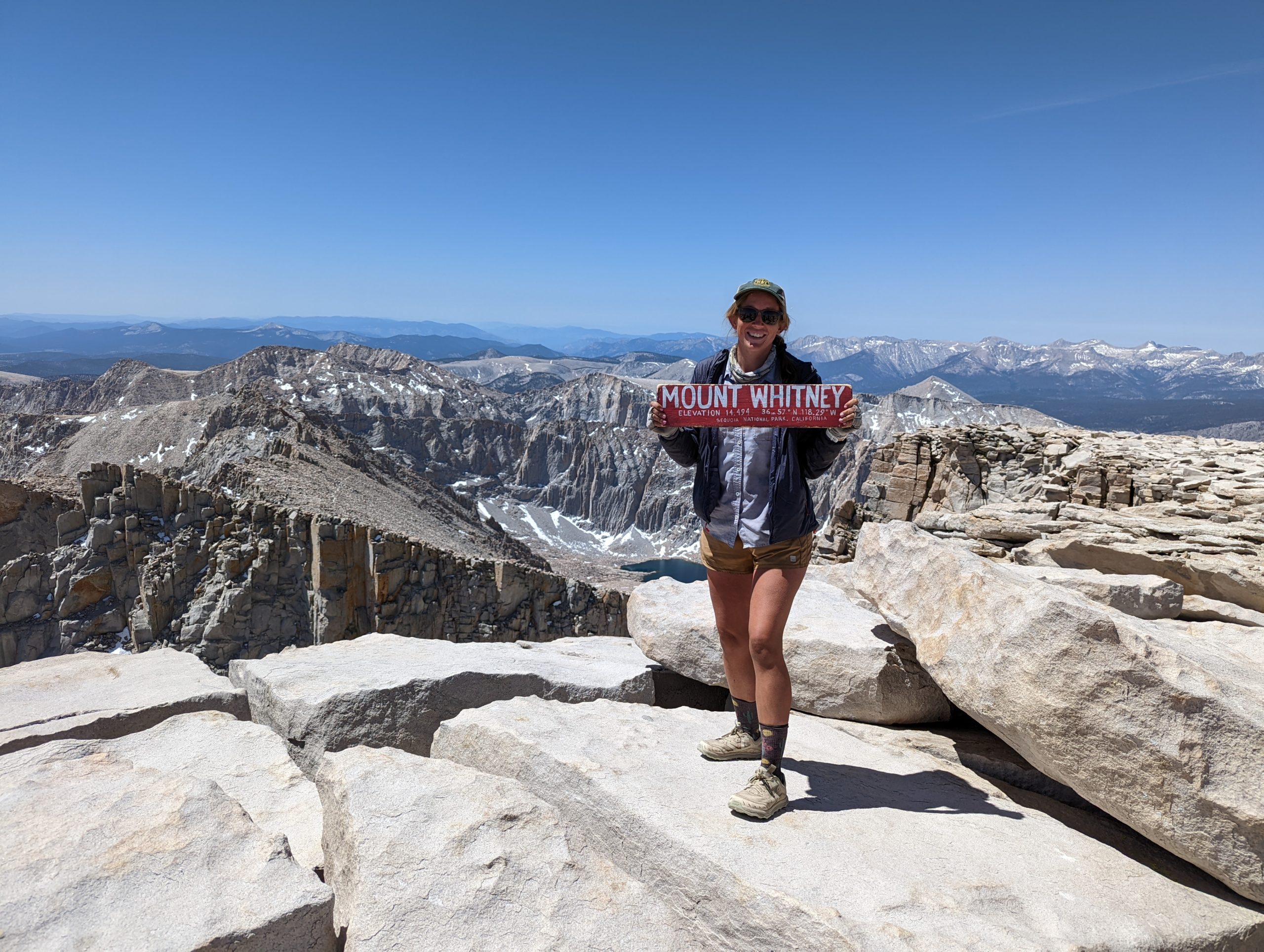 I expected cold and wind, but it’s so magical and so comfortable up here that we linger for two hours before reluctantly starting down the mountain. The descent is long but uneventful. Captain Something and I chat about jobs and burnout and having no roots growing in any one place. We briefly consider swimming in Guitar Lake but continue on past it without stopping.
We pushed hard to get to Whitney today, but we have shorter mileage planned for the remaining days to Bishop. When we reach Crabtree and the others have all agreed to stay a second night rather than returning to the PCT, I feel a flood of relief. We pass a relaxing afternoon at the campground, recovering from four challenging days in a row. The zero at Grumpy’s already feels like the distant past. I’m looking forward to slower days as we continue deeper into the famous Sierra.
< Previous Post
Next Post >