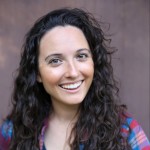 My mom and I camped at Lake Morena the night before the beginning. I offered for her to stay at the border with me but I couldn’t promise there were toilets so Lake Morena it was. The last few nights I’ve slept horribly, this night was no different. I finally fell asleep around nine and woke up at 2:30 and couldn’t fall back asleep, no matter how comfy I was. Nerves.

By the time we packed up, hit the road, and got to the trailhead it was around eight a.m. During our departure, we had only seen a few of the first hikers pass through camp, none had stayed in the official backpackers’ site. Pretty much the whole grounds were empty except for a couple RVs and the camp host.

At 8:30, we arrived at the border. The PCTA people were there to greet us and expressed how they were jealous I was getting to hike and they were relegated to their positions. A few snaps at the monument, a long hug to my mom, and I was off. It was nine a.m. 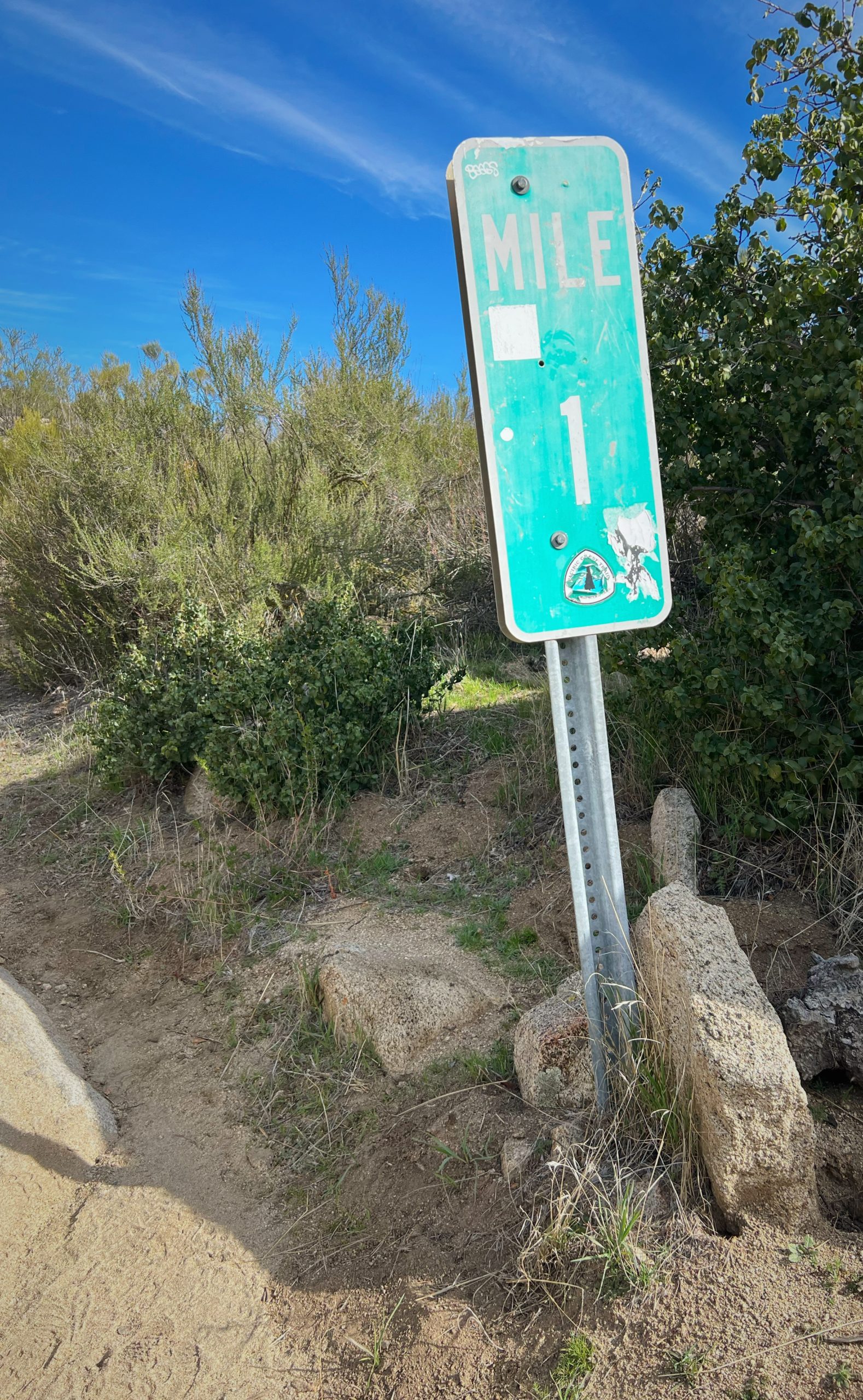 The first mile flies by—I love that silly marker. So small yet so monumental. I couldn’t help but get slightly emotional about everything. The trail doesn’t start at the trailhead. It’s everything that has led up to that point of actually setting foot on it with purpose. I had hiked the same section last year and it just feels different, heavier but not in the gear sense.

The first person I met was Lost and Found. We would go on to play leapfrog all day. Another interesting character I met was a French-Man. I didn’t catch his name but I butchered French towards him while he was much more clear with practicing his English on me.

There was no water till mile four, then none after that till Lake Morena, which was fine. I started with four liters of water since I didn’t want to have to stop to fill up. I took my first real siesta around 10:30. Early but my body was asking for it. Also, my watch told me that the sun would be at its peak in just an hour so it seemed justified. I took off my shoes, laid back, and took a nap hoping it would supplement some of the lost sleep from the night before.

But as I was reclining, something caught my eye. A glint of red in the bushes across the way. I looked a second time to make sure I wasn’t imagining it. Nope—balloons. Two Mylar balloons, most likely from someone’s Valentine’s Day gift, were caught in the brush. Knowing how much my husband despises them, I couldn’t leave them there, so I scrambled my way through the bushes to untangle the trash and pack it out with me. 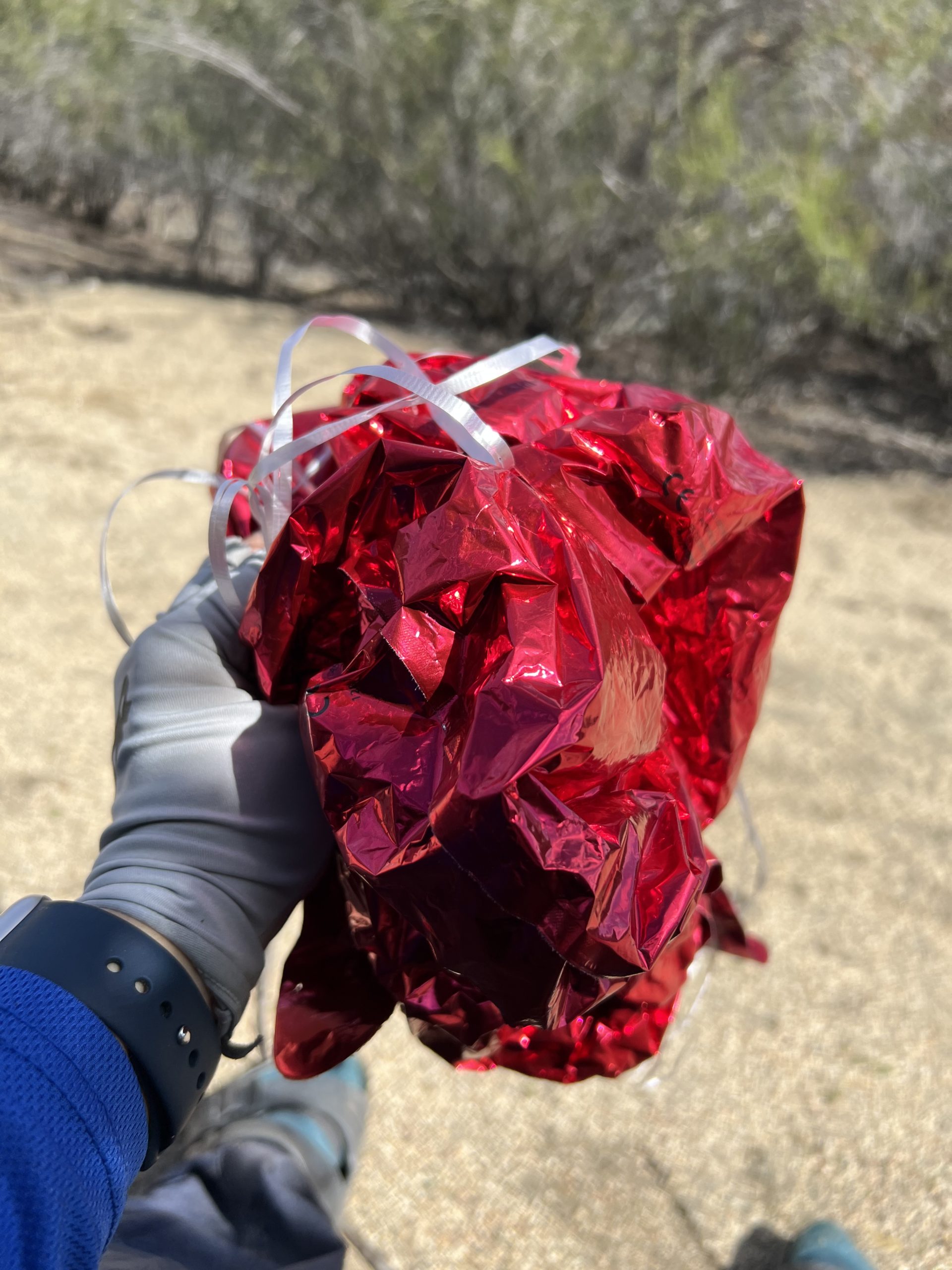 I stayed in my spot for about an hour and a half and felt refreshed to start again. It wasn’t long after hitting the trail I remembered I don’t have to suffer in the sun, I have my umbrella. The official attachment annoyed me getting caught in my braids so I fashioned a way to hold it hands-free with my bandana that mostly works well. It helped immensely, the heat is still hot but it’s not directly all over you.

Having done this section before, most of the scenery was familiar so I didn’t stop for many pictures. But I had forgotten how truly desert-like and exposed this first 20-mile stretch is. You walk and walk but it doesn’t necessarily feel like you’re getting anywhere cause the rocks start to look the same and you try to squeeze yourself under a Manzanita bush for some shade.

My next break was at mile 10.6 around 2:45 p.m. I was starting to feel some aches so took some Tylenol to alleviate that some. So close to the end of the day some wouldn’t stop. “Some” is usually “me,” but I really want to try and listen to my body’s cues this go around and let that dictate my process more than a deadline since for once I don’t have one. But it’s easy to slip back into old patterns and headspace. It can also be difficult to decipher the difference between uncomfortable pain and a potential injury.

After some food and reading, I took off again around 3:45. The next five miles flew by. Downhill is my favorite. But I knew there’d be another climb on the other side. By the time I hit Hauser Creek the sun was already starting to set, but I don’t like starting my mornings with a hill. I am not a morning person. 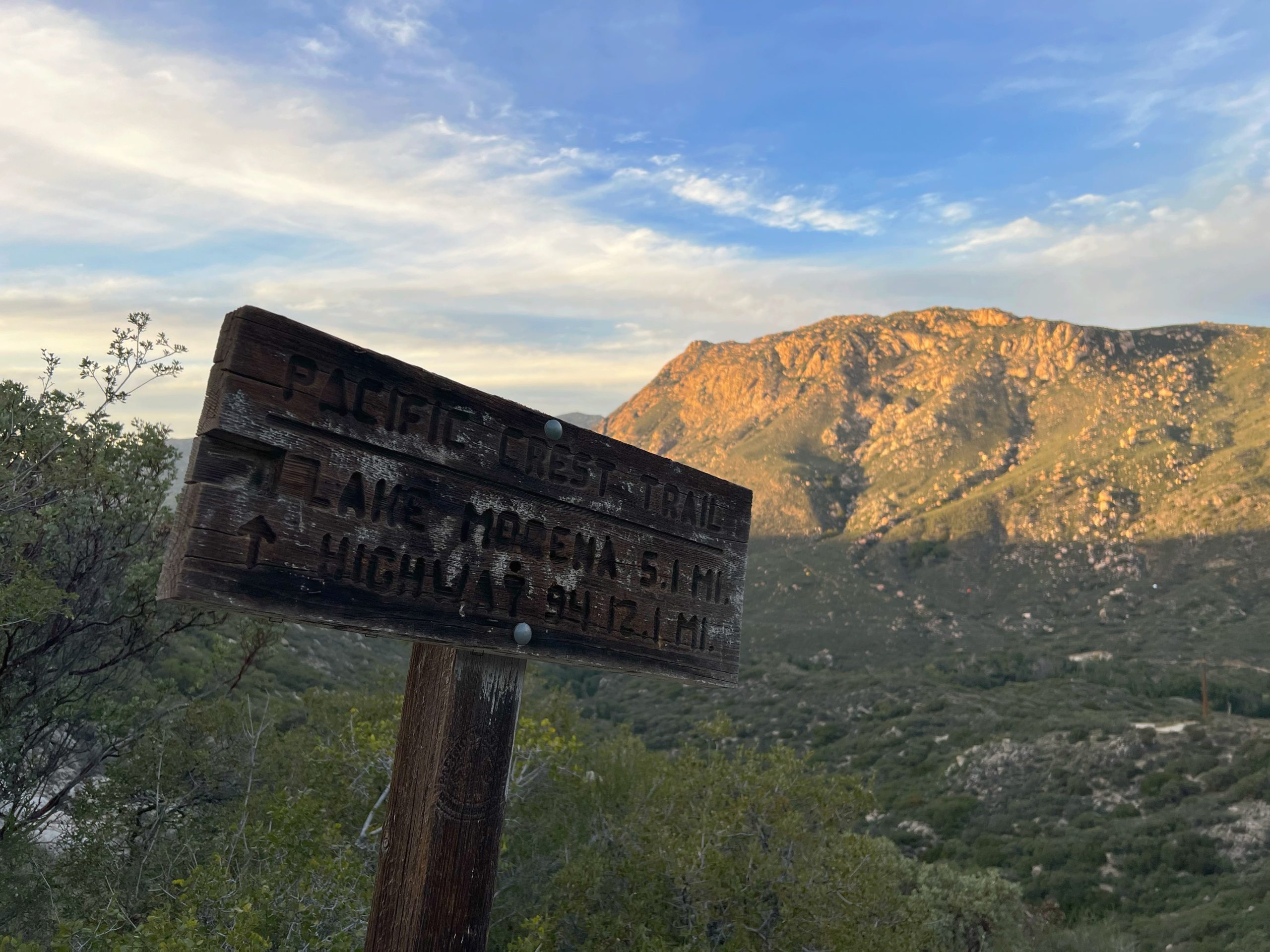 It was a beautiful sunset. Pinks and oranges bouncing off the rocks and the manalgamous clouds in the sky. I had hoped to make it to Lake Morena, I am fine night hiking, I do it regularly and enjoy it but lack of sleep was catching up to me and it wasn’t worth pushing my body more for a few extra miles.

I found a spot, set up camp, cozied on into my tent, changed, ate some food, read, and went to sleep. And I get to do it all again tomorrow. Lucky me.

Jackie Nicole is a SoCal native, Millennial, multi-hyphenate, married, dog-mom who first backpacked the JMT solo in 2017 when everyone told her not to. Since she has racked up many more miles and is hoping to add 2,650 to that total starting March 2nd, 2022 on the PCT.