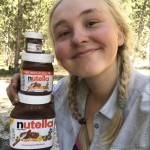 Discouragement, Sweeping Landscapes, and the Sierra

Audio: The sweet sounds of the Sierra, since both my portable chargers died and I needed my phone for the GPS. Whoops! Hearing a river crossing before you see it is kind of scary, and I much prefer listening to some rocking oldies (like Depeche Mode or Smashing Pumpkins or Journey) than crashing rivers before I have to wade across them.

Again, I am massively sorry for the lack of updates. I’m now well out of the Sierra (mile 700 to 1,060), and have had a difficult month mentally, to say the least. The Sierra were indeed a whole new challenge for me, and there were many days where I felt the mountains had won the fight. But enough of that. I’m out, injury free, and have my eyes set on finishing California.

It is actually stunning how fast the landscape changed from desert flora to mountain flora. Coming into Kennedy Meadows (mile 700), we had seen one river and more sand than I care to think about, but leaving KM, the hills were covered in lush vegetation, there were unmarked creeks everywhere, and the views became priceless. A literal overnight change. 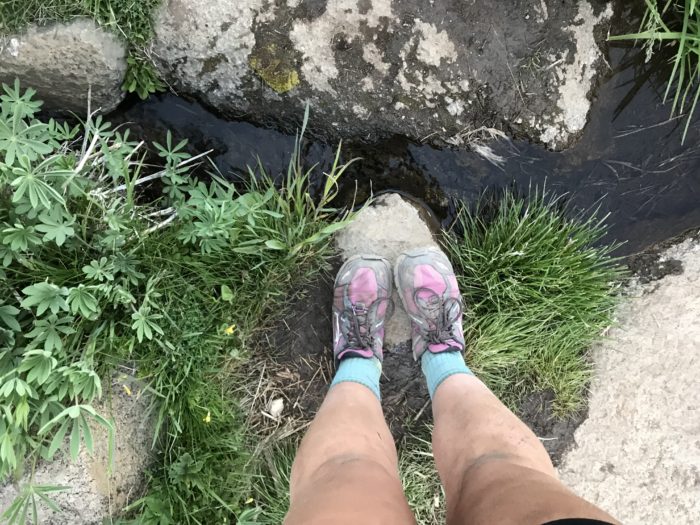 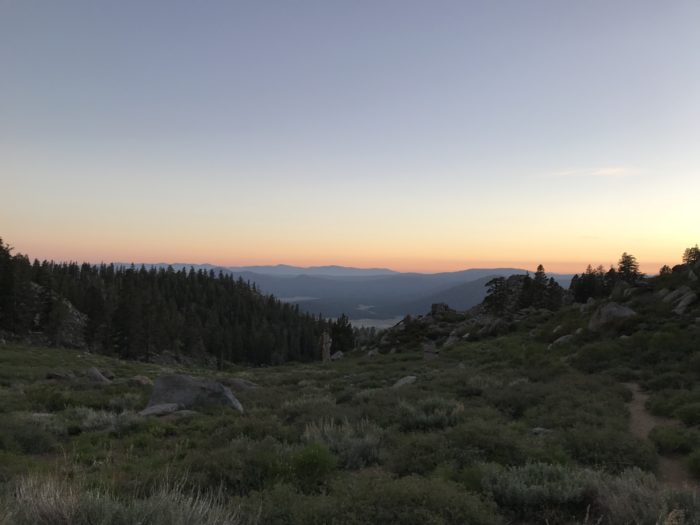 Wow. Words can’t describe the beauty of the Sierra. Seriously. I wake up and there are towering mountains on every side, huge patches of untouched snow, ancient trees, glassy mirrored lakes, and boulders the size of giants everywhere. And since I actually can’t do the Sierra justice with my pitiful descriptions, here are some pictures. Even though hiking through the Sierra was physically and mentally one of the hardest things I’ve done, it was so worth it. So. Freaking. Beautiful. 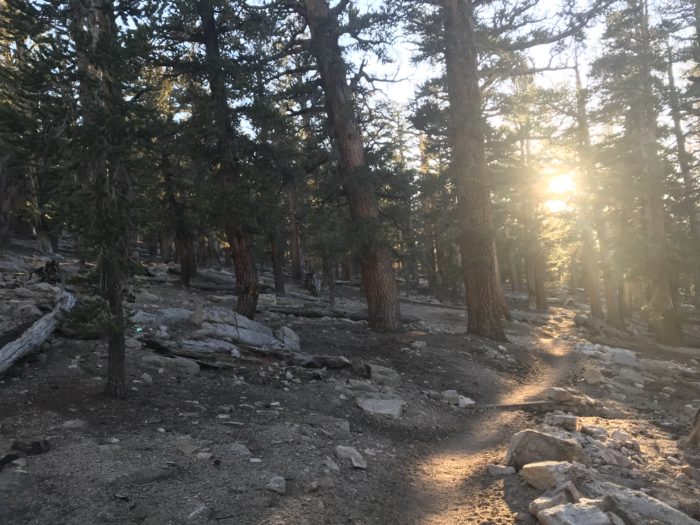 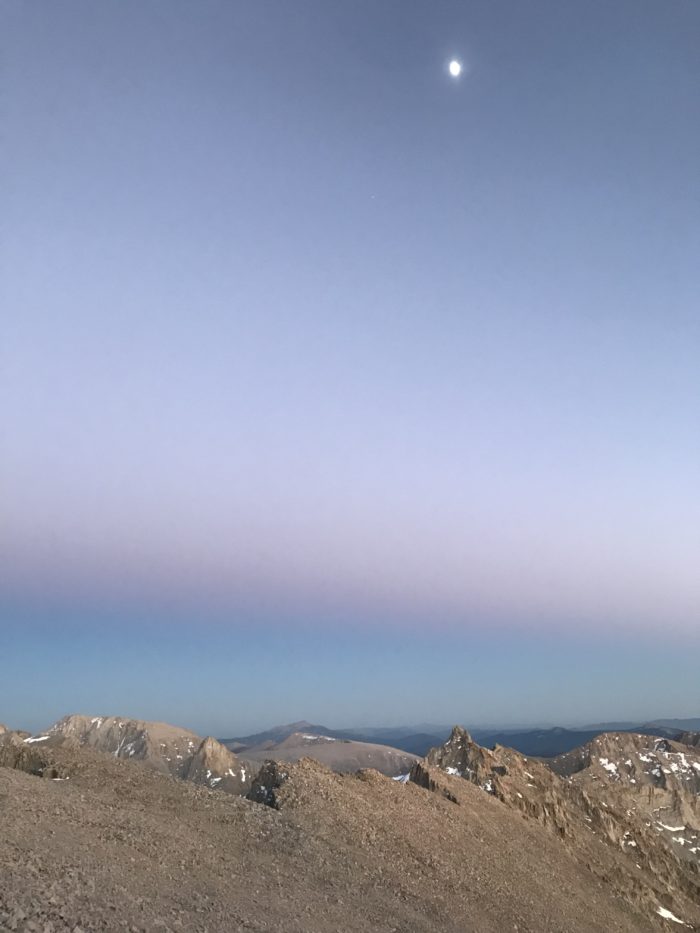 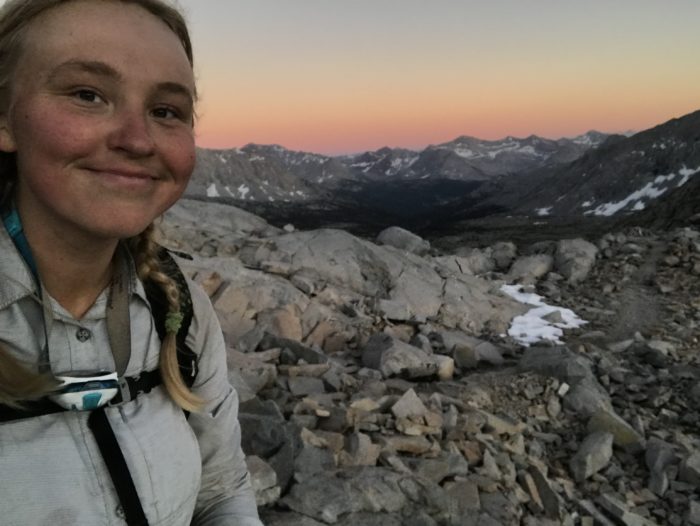 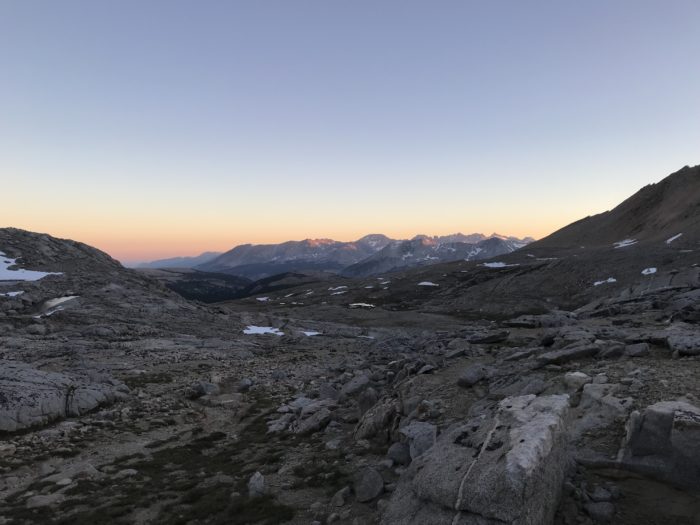 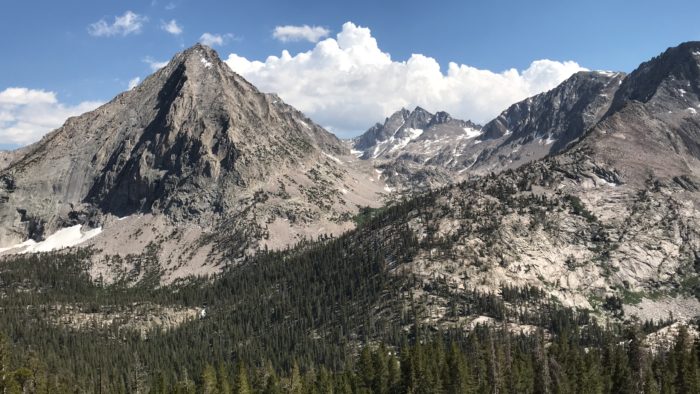 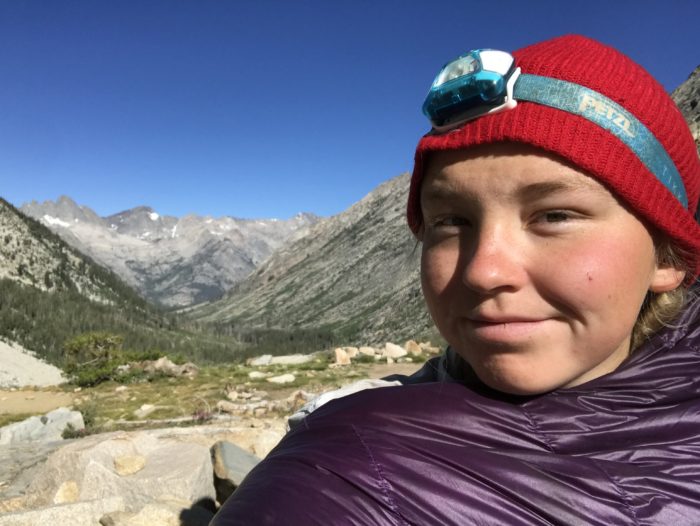 A Sock Lost in the Most Sierra Way

After Mather Pass, I took a quick break for lunch with a view of an incredible unnamed mountain lake. I did some yoga with an absolutely stunning backdrop, and was just enjoying my granola bar–it’s peanut butter–when I saw a sock sinking lazily into the glacial blue lake. I thought, Ha! Sucks for that person! Now they only have one sock! And then, Wait. That looks like my sock – a green and purple Darn Tough. And then I whipped around, and whaddya know, there is only one green and purple Darn Tough sock next to my two shoes. Shoot! I turned back around, and the sock had sunk deep into the lake. Crap.

I spent the next hour trying to get my sock out (because leave no trace amiright). I waded up to my waist twice, and then waded right back out because the water was freezing like I could literally see snowmelt dripping into the lake. I then had the brilliant plan to use my tent poles to fish out the sock, and unpacked my whole backpack to get to my tent stakes. By the time I was back in the lake, looking more like an angler than a hiker, I had lost sight of the sock. I mean, it couldn’t have been a worse color because it blended in perfectly with the color of the lake. I stood in the water, now stomach deep, holding my tent skeleton above my head so I wouldn’t make any ripples, and lots of day hikers, JMTers, and fellow PCT hikers passed by with pointed stares at my antics, but finally, my sock. I jammed my tent pole into the water, and was crushed to see that my sock was at least two more tent lengths away. Bruh.

I slunk out of the water, looking like a wet dog and feeling like an ice cube, and packed up my backpack, put back on my pants, and left the sock to its icy grave. Well, I tried.  But having a freezing sock attached to the back of my pack as I left that lake was not worth hypothermia. Oh well. 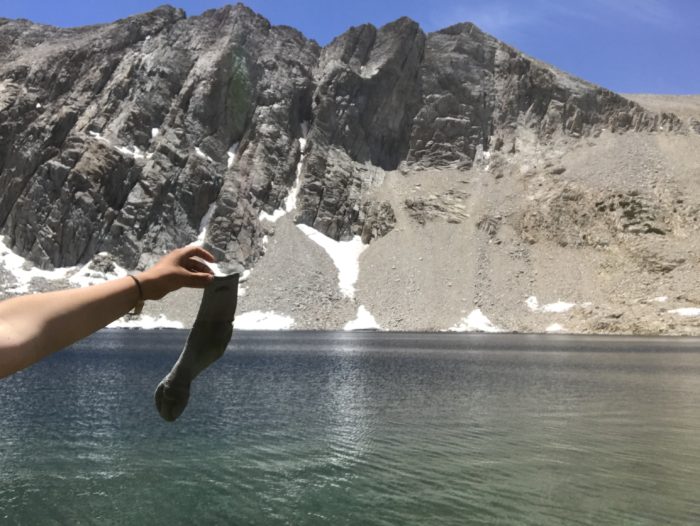 Forrester. Glen. Mather. Muir. Selden. Silver… and the list goes on. How did I do it? Lemon pepper tuna with nacho cheese Doritos (smart). Hiking at night (not smart). Selfies (vain?). Snow cones (freaking brilliant). Ice cream for breakfast in towns (also brilliant). My thermal pants worn inside out (very sparkly!). And because mosquitoes suck and I wanted to run away from them (more on those cheeky bastards later).

The first mountain pass (and the highest point on the PCT at 13,200 feet) was Forrester Pass. Forrester is pretty soon after Whitney, so my trail family (Jaron, RayNow, and RayNow’s friend Sam) and I decided to camp 16 miles from our post-Whitney campsite. Yeet, I thought, I could do 16 miles in my sleep! But oh no, not Sierra miles. I was trucking along, and reached the base of Forrester at about 9 p.m. Cool! I still had some time before it got dark. Plus, I was a seasoned night hiker, and how hard could a mountain pass be?

Ha. Very hard. I got to the top of the pass around 11 p.m., which was fine, because 11 p.m. for me is like 11 a.m. for normal people. I’m just getting going! But by this point, it was pitch black. Spooky. I started the descent, and guess what? There was snow. Like, a lot of snow. Now, I’m no stranger to snow — the whole city of Portland shuts down when we even get a dusting, but no matter. I can keep going. About 20 minutes into my descent (more like postholing in a generally downward direction), I decided that what I was doing (Forrester alone and at night) was indeed the stupidest decision I had ever made. Like, I could’ve broken a bone and been stuck, freezing my butt off, until morning when wiser hikers would come over. I could’ve gotten lost, or fallen into one of the fast-moving snowmelt streams, or gotten my SPOT tracker wet so that my mom would have no idea what happened to me. So not smart. But I made it down, and to the designated campsite, and then finally fell asleep at 2 a.m. The next morning (RayNow’s 30th birthday), Jaron and RayNow somehow passed by me, and I didn’t see them again until mile 900, so I guess the night hike wasn’t even worth the danger. Oh well. Lesson learned. 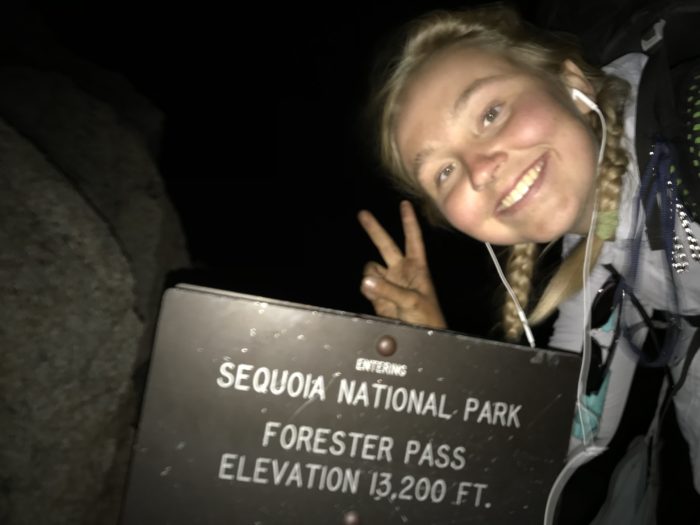 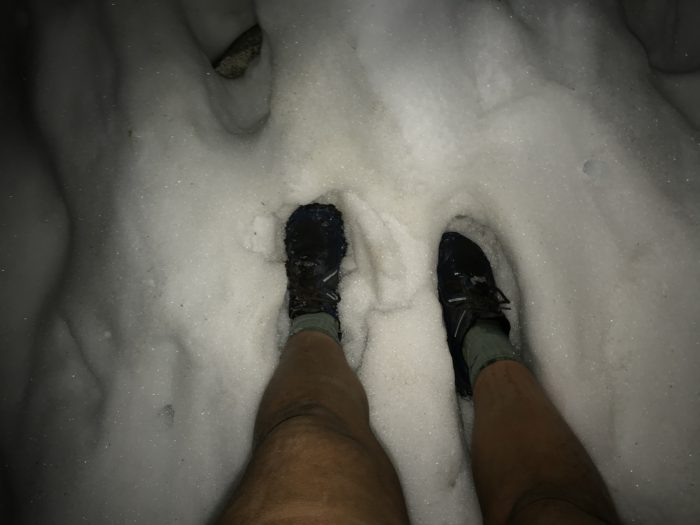 Another notable pass was Muir. Having the (potential) Forrester fiasco fresh on my mind, I was most of the way up the pass (in the dark), when I realized the error in my ways and set up a snappy camp. I had no idea what the view was around me, except that there was a lake close by because I could see the stars and moon reflected in it. I woke up to the view below, and was understandably convinced that I had just slept at the most beautiful and unknown campsite in the whole world. Like, nothing can beat that view first thing in the morning. Nothing! 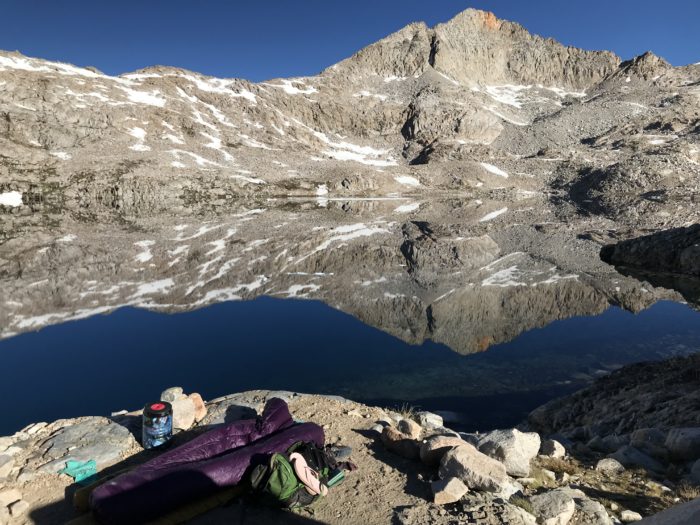 When I got to the top of Muir, I decided to make a snow cone (concentrated electrolyte mix poured on top of a fresh ball of snow), and quickly had downed four of them before I realized that kiwi strawberry is maybe not my favorite flavor. But the snow cone idea? Um, heck yes. Following that success, I made snow cones wherever and whenever I found patches of snow. Totally delicious, and totally worth it (just maybe not so much kiwi strawberry flavor at once). 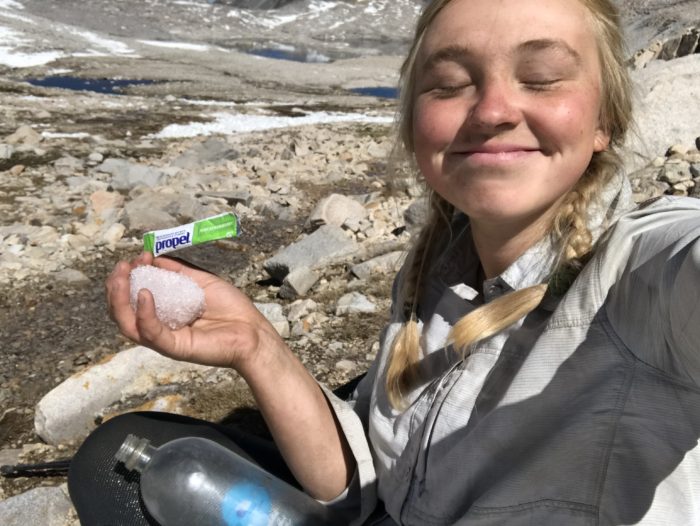 While I did do this one at night (with my friend Ronja from Germany, Goldielocks from the Czech Republic, and Reeses from Virginia), it was how I did it that made it memorable. No, I didn’t cartwheel the whole thing or sing Cotton Eyed Joe on repeat, but I did do it… as part of a 30-hour and 42-mile hike to ice cream. Yep. I hiked 42 miles in 30 hours to get a pint of Ben and Jerry’s Chocolate Therapy ice cream for breakfast. And I did a mountain pass at midnight to get there. Was it worth it? Yep. And I got to see Jaron and RayNow and Sam, and I ate a whole pizza. Aan I spent the night in my first hostel. Winner winner chicken dinner!

Here are some assorted pics of the other passes. 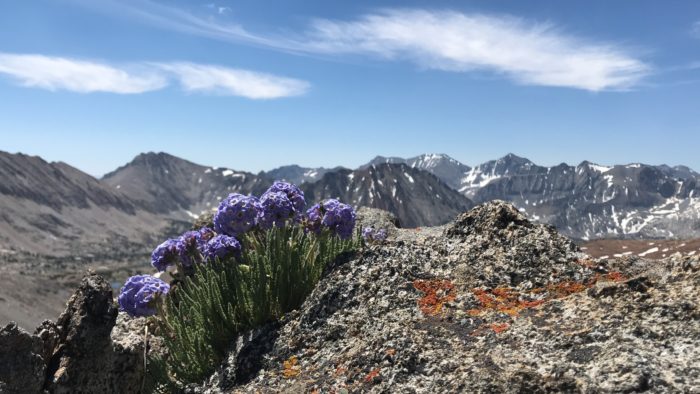 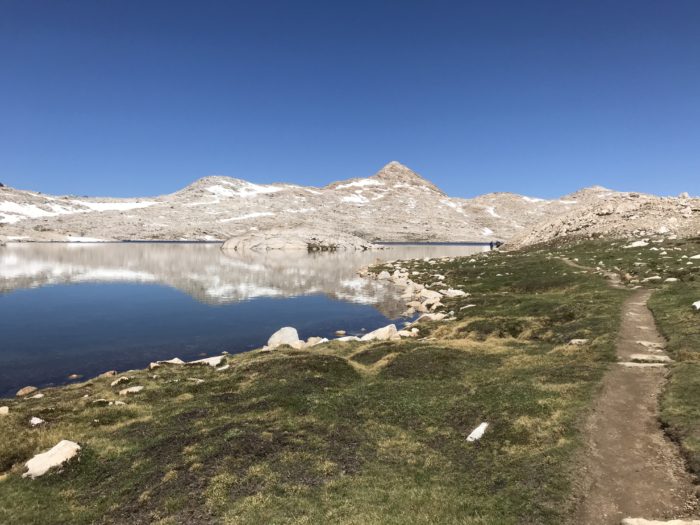 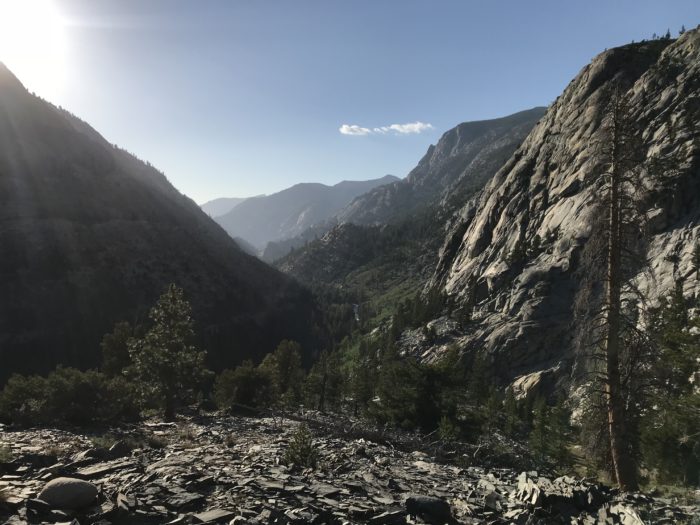 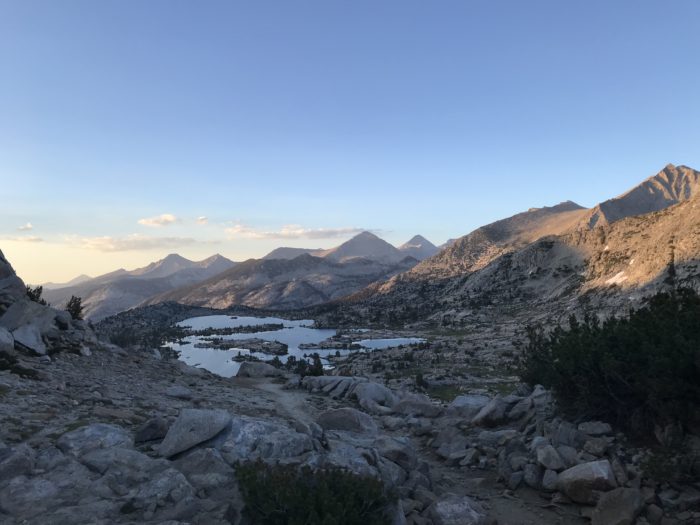 So the Sierra are indeed freaking beautiful, but the mosquitoes are seriously unreal. They are persistent, annoying, and just won’t die! Like, for every five that I killed, 25 more buzzed in and started sucking my blood. I’m pretty sure that I’ve now donated enough blood that the Red Cross will stop calling me for life. Geez. 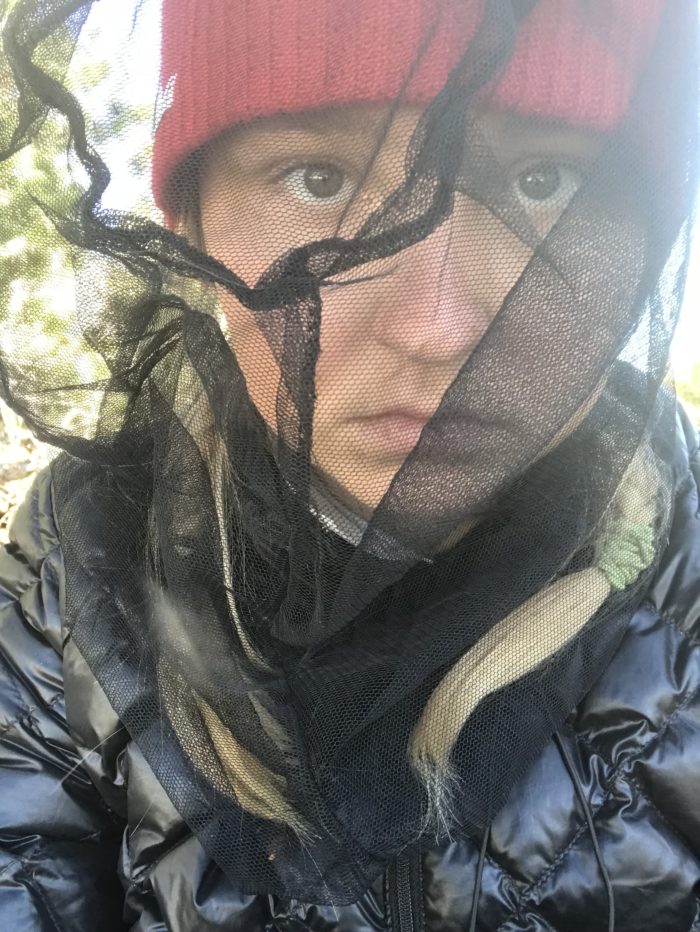 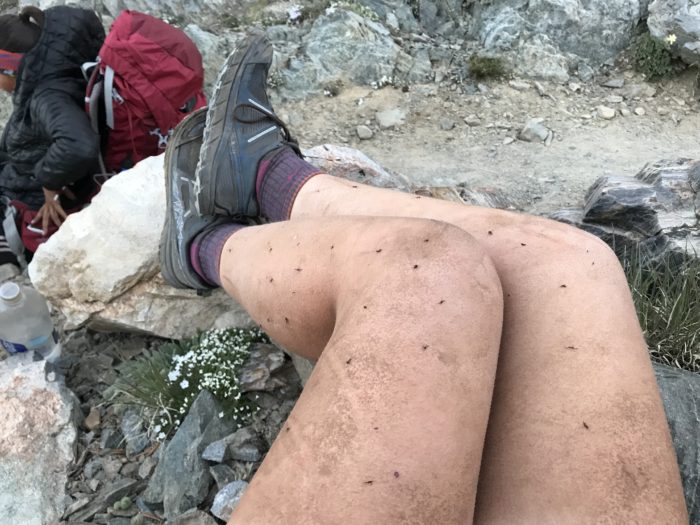 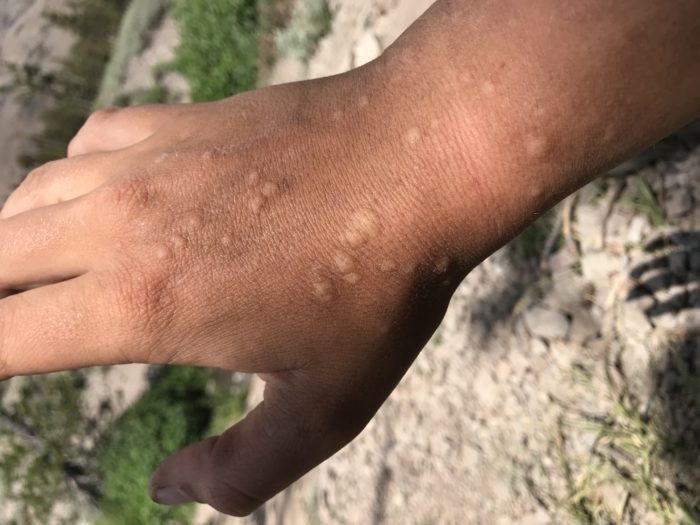 OK, so I heard from successful thru-hikers that everything after mile 500 is a mental struggle, while everything before mile 500 is physical. I couldn’t agree more. Perhaps because I didn’t really know where my trail family was, or that I ran out of food around mile 655, or that my body would not get tired no matter how long I walked, or that I couldn’t listen to audio because I needed my battery for GPS, or that I had nobody to share the beauty of the Sierra with… but I began to really struggle mentally. I was talking to myself, I never felt motivated, and I couldn’t figure out what I wanted. More on that in the next post, but suffice it to say that I was more discouraged and overwhelmed than I had ever been. It was so hard to stay positive, which doesn’t make any sense because I was physically the strongest I had ever been, and in some of the most stunning locations in the world, but the mind is a funny thing. It was a challenge every day to even get out of my sleeping bag, but through sheer stubbornness, I think, I made it out of the Sierra, a little worse for the wear. I think, however, that I needed that time alone, suffering, to find my purpose and the reason why I’m out on the PCT, and I did. More on that in the next post. 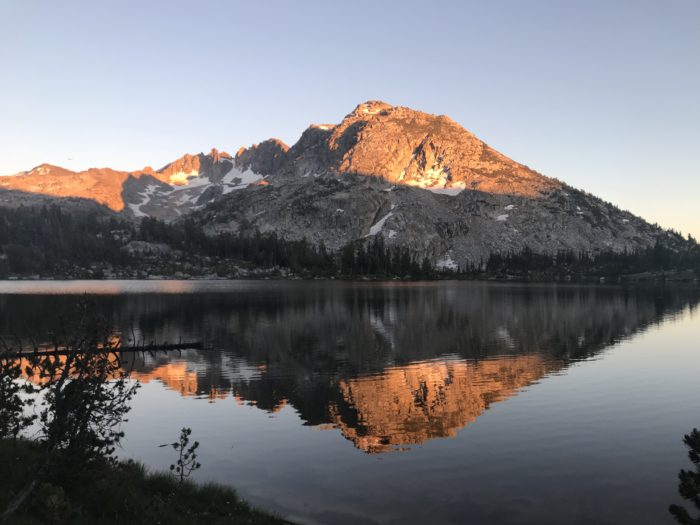 P.S. The featured image is on top of Whitney. Um. Unreal beauty.

Howdy fellow trekkers! My name is Anna (trail name Spooky) and my favorite activities are sleeping and eating waffles! I hiked the first 1,200 miles of the PCT in the summer of 2018 and will be finishing the trail as soon as I can!