The weather showed temperatures of upper teens in the mountains so decided to stay in town all morning.  I was introduced to Bojangles breakfast sandwiches which were quite tasty. The family I stayed with were very gracious hosts and it was great to hang out and talk for the last day. Mid afternoon we headed back out to the falls where I was picked up. Stopped by a couple gas stations to pick up a couple days of food before being dropped off. 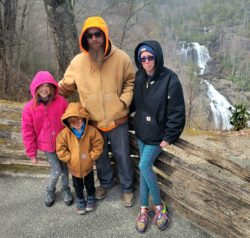 The trail from the road was a long climb down the side of the hill and followed it all the way to the Whitewater River below Upper Whitewater Falls.  I had a hell of a time trying to get to the bridge.  I lost the trail here in large Boulder size rocks. With some rock hopping I was able to climb up on to the bridge. I have not gone very far at all, but with the sun coming down decided to take the first campsite I ran into.  Turns out this is a perfect spot because checking the map at 12 miles a day I will hit Table Rock State Park and both Palmetto Trail Passages before getting my resupply.

A bit chilly last night.  For some reason my feet were cold, so I ended up sticking them in my pack.  That seem to do the trick.  Today was much warmer than it has been.  I think it was the first time with blue sunny sky also.  Ending up hiking the majority of the day in my t-shirt instead of my rain jacket.  The trail started off as a single track dirt path.  It would come to an old forest road that doesn’t look like it’s been used in a while. I apparently have crossed back into SC then back into NC but saw no signs. Ran into a couple section hikers from Cincinnati who will finish the trail on this trip. We had a nice long chat, at Hilliard Falls, and they even knew of the Palmetto Trail. Ran into another group of three when I was getting water but they did not stay to chat. All of them were going the opposite of me.  Tonight another hiker came into camp going the same way.  Not very chatty either. 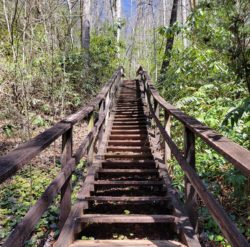 Really enjoyed the day, if I recall correctly part of it would be its sunny outside.  Alot of climbs, mostly uphill and normally with switchbacks zigzaging up or down the mountain.  But one highlight would be the insane number of steps.  Crossing the Horsepasture River Bridge I counted 70 steps, with a 3 step break then another 35.  Prior to that there was a 50 step climb. It almost felt like a stairmaster when done.