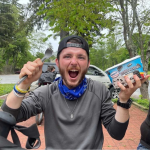 Unforgettable sunrise. One of the best views of my life matched with a clear, open sky for the sunrise.

Cloud’s Rest, the rocky summit we stood on this morning, is positioned right in the middle of Yosemite National Park. We got on top of the 9900ft peak and gazed right down Yosemite Valley. It was mesmerizing. Mist lingered deep in the valley above the small bodies of water. The sun rose behind us as we peaked down the valley, casting Cloud’s Rest massive triangle shadow onto the world in front of us. 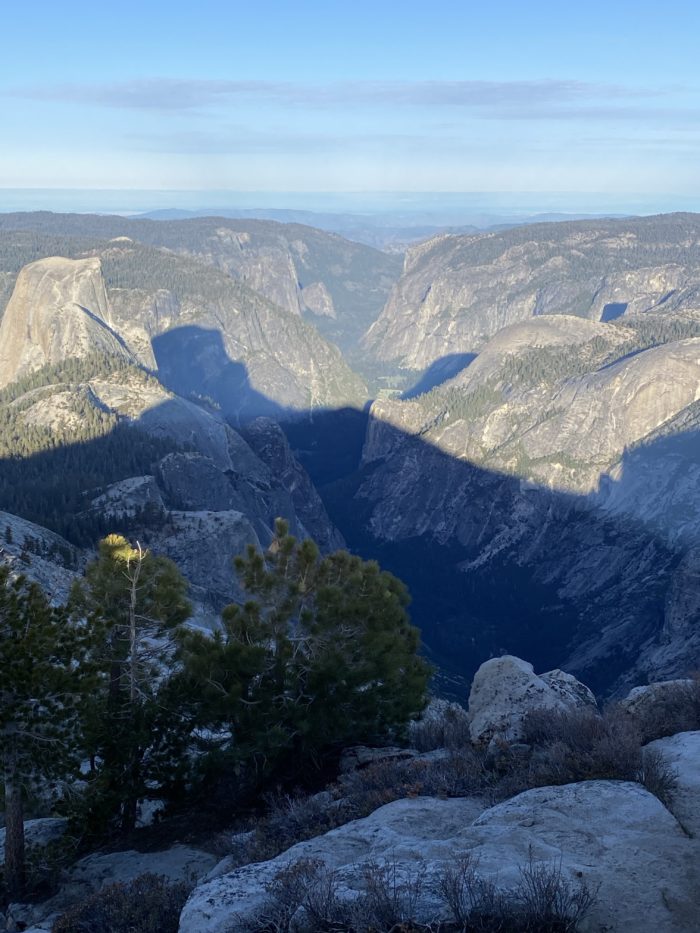 We each took a few minutes to ourselves. I FaceTimed my dad for the first time on trail. I hate when people do that on summits but we had the summit to ourself – no guilt. I choked up talking to him and being able to share at least a tiny sliver of the moment with him thousands of miles away. 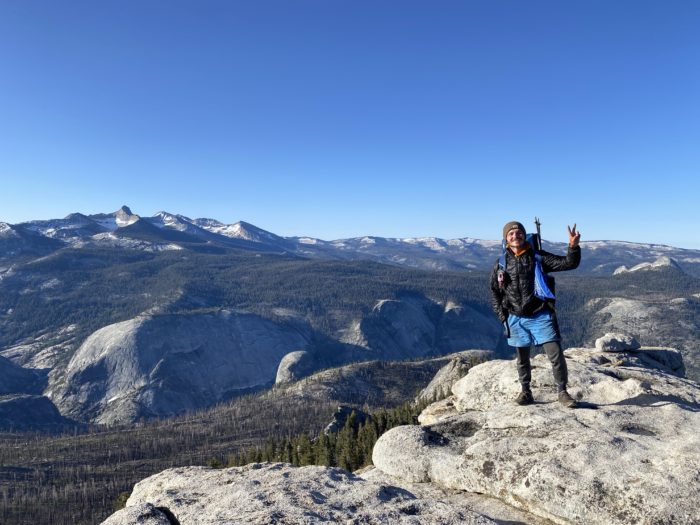 Eventually we made our way down off of Cloud’s Rest and continued our descent towards the Valley. We made our way to the Half Dome junction to ascend the famous hike. We showed our permits at the base and up we went. Oh yeah, and I finally saw my first bear on the PCT too!

The Half Dome cable portion was insane. It was so fun. I zoomed up the cables using my hands to help pull me up. The ranger said it was “impossible” without gloves but I took that more as a challenge than a warning. There was so many people on the summit hanging out or resting, I didn’t spend much time there. While I took my short FaceTime alone on Cloud’s Rest, it seemed half the people on the summit were sharing their view with someone over the phone. I took a few photos and went back to the fun part, those steep sketchy cables. I zoomed down sliding post to post. I can definitely say there were some people concerned for me and the speed I was going down but I think the big goofy smile I was wearing told them everything they needed to know.

After eating lunch back at the base of the climb, we started the final leg of the hike. Only a handful more miles to the Valley and some warm food. Chef and I finished the day on the Mist Trail, a busy trail near the Valley that highlights massive waterfalls of the Merced river. Huge clouds of mist soak the adjacent trail and the people on it. The perfect finish to a long, spectacular day. 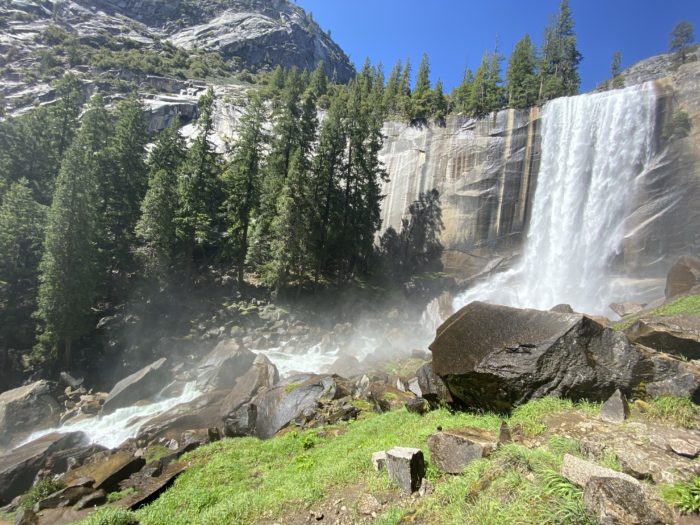 The park was amazing to us. While our first day was cloudy and socked in, the Valley revealed herself to us from Cloud’s Rest. I truly feel like I was floating on trail today. I can’t wait to visit this park again. You can see why they made it the first National park, ya know?

It feels so good to be back on trail. It’s weird, Yosemite NP was like a vacay from my vacay. But, of course all I did was do the exact same thing I usually do: walk. However, it does feel distinctly different to walk back on PCT miles and it feels damn good.

We woke up in the busy backpacker’s campground and rode the bus 2.5 hours back to Tuolumne Meadows through the morning. As the bus rolled out of the valley, we all careened our necks to get a great view of El Capitan. El Cap took up most of the windows on the right side of the bus, so everyone seated on the other side of the aisle jumped over to the seats beside them for a better look. The views from the road were just as stunning and it was not uncommon to see tons of people parked at certain overlooks on our way up to the top of the park.

We hopped off the bus at its last stop and readjusted our full packs. Most of us resupplied in the Valley to carry to Kennedy Meadows North so we were back to max capacity. We cruised the easy miles out of the meadow and I found myself totally alone after just a bit. Just how I like it.

The trail was like my own obstacle course, hopping rock to rock in the granite canyons, doing my best to keep to my feet dry. Our campsite was nice and surprisingly free of bugs. It’s definitely hot now though. The temperature has turned up the last two days and I don’t think it’s turning back down. Bring on the summer jams. 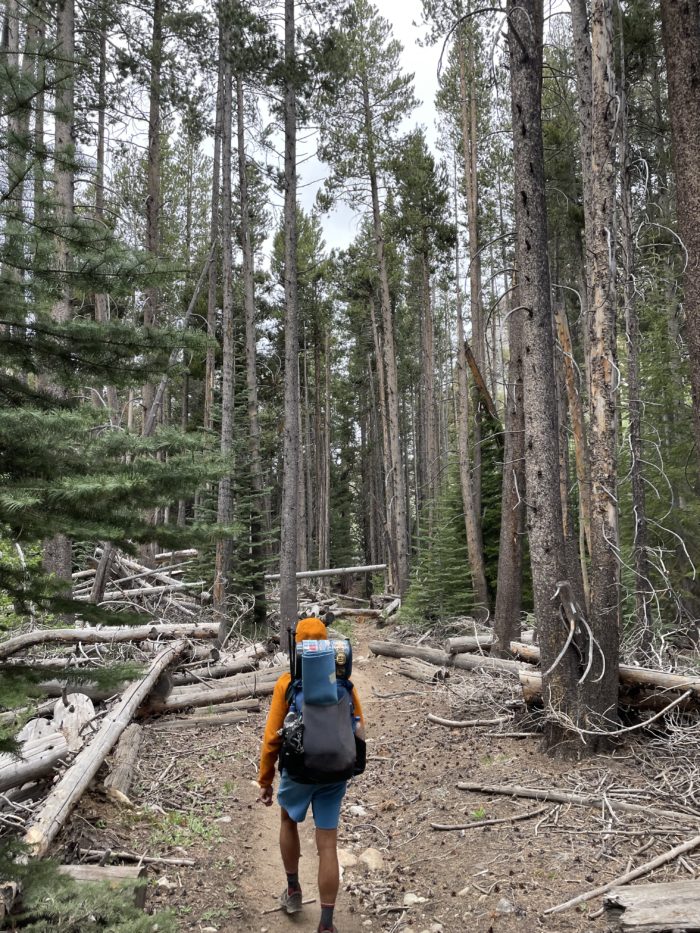 A late start this morning as I finally rolled out of camp around 8:30 AM. Not my usual routine but sometimes it’s nice to break that structure. Plus, it incentivized me a little bit to push the gas in the morning which I ended up enjoying way more than I was expecting.

While I was chugging hard up the first 1000ft climb of the day, I passed a guy my age who was just off trail adjusting his pack. I said hey as I went by and soon enough, he was just behind me keeping pace for the rest of the climb. I was pushing hard with the music in my headphones catalyzing my increasing speed. He stayed with me the whole way.

After around 15-20 minutes of being just around 20ft behind me I glanced back and asked him if he wanted to pass, he said “no thanks, you make a great pacer”. That should have been my first giveaway.

We asked each other where we camped the night before and all the usuals thru-hike small talk when he told me he had hiked an AT section to warm up for the PCT. “Oh sweet, what section? I love the east coast.” I asked him.

I stopped hiking and turned around. “Dude. That’s not a section that’s 90% of the AT.”

We both busted out laughing and he happily gave me some more context. It turns out his name was Blouse (and you can find him on The Trek) and he is currently going for the Calendar Year Triple Crown. He’s been crushing miles since either Jan-Feb. Dope.

After we had finally exchanged our trail names and the trail flattened out, we meandered through some meadows for a few hours together. I also fell into another river crossing; I love surprise swims. They get you every time.

Blouse and I talked trail for those few hours as I asked him a ton of questions about logistically doing the CYTC. He seemed like a normal guy just like me and not some endurance lunatic who takes Gu packets through IV. The more information he told me the more he planted the seed for me to do the same one day. In fact, since this day I’ve been thinking about it a lot.

Benson Lake. “The Riviera of the Sierra” boasting massive beaches.

Well, most of the time at least. 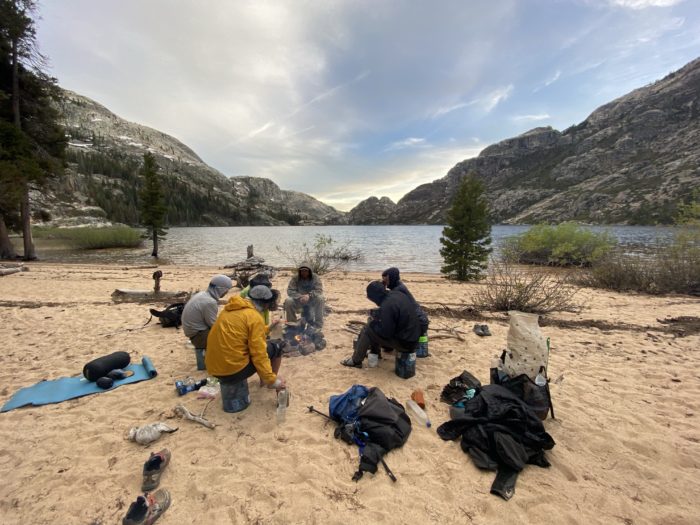 As soon as we arrived last night we immediately had to curb our expectations. Not perfect but still nice. We left the flooded beaches of Benson Lake being chased by mosquitoes in the morning and hiked on. The day was uneventful as the temperature continued to stay warm.

Around 4 or 5 o’clock, Chef Graham and I arrived at our campsite. A nice little flat spot with a creek rushing beside us for some ambience.

That’s when the mosquito nation attacked. Things would never be the same.

No really though, we had pitched our tent right in the middle of the motherload. Mosquito HQ, if you will. I pitched my tent as fast as possible frequently taking a 10 second break to just run 20 feet away and back to break the swarm. As soon as it was pitched, I unzipped the bug net as little as possible and slithered into safety.

It was still only 5ish so I spent the rest of the afternoon playing with the mass of mosquitos on my bug net. The whole army of mosquitos was knocking on my door begging for just a drop of blood, so I would push my finger against my side of the net and watch the mosquitos slowly realize my tempting offer. They would slowly rotate towards it and then march their tiny feet towards their possible meal. Right as they went to stick me, I would move my finger and repeat the process. It passed the time as I waited to cook dinner. 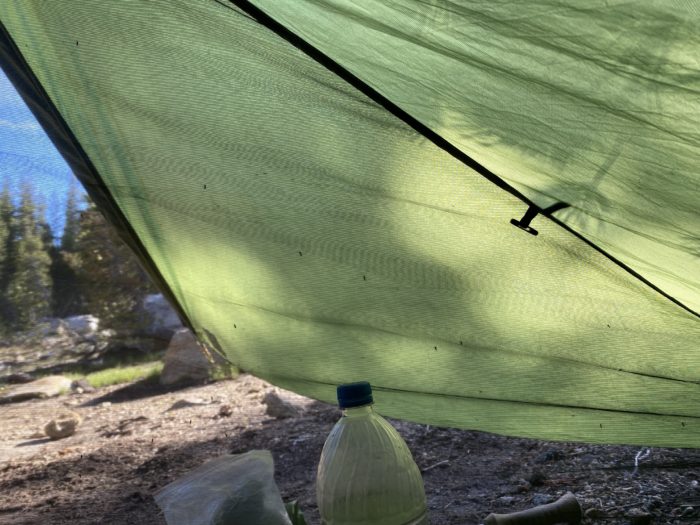 I cooked and ate in my tent and watched the mosquitos slowly fade away from my bug net as the temperature dropped.

I woke up in the dead of the night and decided to collect water from the nearby stream at 1 am when they had finally all gone to rest. I can count on one hand the amount of times I’ve left my tent in the night on any backpacking trip, but I had to wait for the mosquitos to get some sleep. I filtered Emmy water in the cool, dark night. Time for me to get some sleep too.

Whaddup peeps! I'm Connor Chapdelaine but all my favorite people call me Jackrabbit. I'm a biologist by trade but a backpacker by choice. I thru-hiked the AT as a total scrub in 2021 and fell in love as I trekked the east coast. I'll be thru-hiking the PCT this year and getting to know the other side of the country while crushing miles and peanut butter. Keep up with me here and on Instagram @ChapOnTheTrail as I head NOBO on the PCT this year and I'll try to capture what makes a really long walk so damn fun.