Finished up the Enoree Passage with a quick 7 mile hike to the Southern TH at Chandler Road.  Going across the last bridge I ran into a foul smell which I think was a skunk somewhere.  Shortly after this bridge going uphill I also run into four guys out for a stroll.  They are friends from SC, NC, and AL (I believe).  They initially were going canoeing today but the weather is overcast and it’s cold.  I’m actually wearing my pants and raincoat because of the chill.

At the TH I stop and take a break to eat and drink some food. The Newberry Passage is all road walking to the City of Newberry.  The first part of the Passage is dirt but it connects to a paved road that makes its way into town. Nothing very interesting until you hit town. I deviated from the trail when I made it close to a restaurant called Summers.  It is a small hole in the wall diner bit it was only set up for take out because of the pandemic.  I ordered a burger and fries and took it next door to a Tennis Center and sat next to the side of the building that blocked the wind.  That hamburger never had a chance.  It tasted so good. 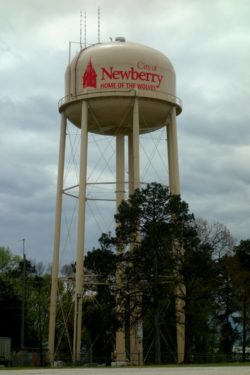 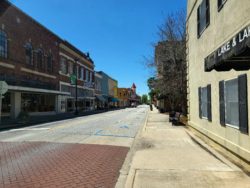 I would end up spending three nights here. The first night to rest. The second day to look for some shoes as my soles are starting to come off on one foot.  Unfortunately none of the stores here selling hiking shoes. And some resupply at the local Walmart.

The last day I spent was to do this five mile Lynchs Woods Passage.  This is a park as you walk Southeast out of town. It is set up for hiking, mountain biking, and horseback riding. Some trails are not allowed for all three sports.  I really enjoyed this area. While there were multiple trails that criss-crossed each other, the Palmetto Trail was very easily marked.  I went clockwise through the Park (the trail is a loop) and was quite surprised how far back it was.  You honestly could not tell you were in a city. I met a local teacher who was walking his dog and we chatted for quite awhile. 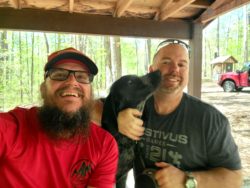 Back at the parking lot was a large Pavillion with multiple picnic tables.  I sat and had lunch when the teacher came up and handed me money for dinner.  Tried to refuse but he is a section hiker of the AT and it was his way of providing trail magic, thanked him for his kindness. After my break was done I ate heartedly that night at Bojangles, which seems to be my favorite fast food getaway in South Carolina. The Cajun Filet Biscuit is the bomb.