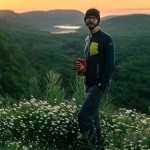 PCT California Section A: A 107-Mile Intro to the Desert

The first section of trail travels from the border to Warner Springs, 107.2 miles. Highlights include the Laguna Mountain Rim/Kwaaymii Point, pie at Mom’s Pie House in Julian (Thanks!), the diversity of cacti north of Scissors Crossing, and Eagle Rock. 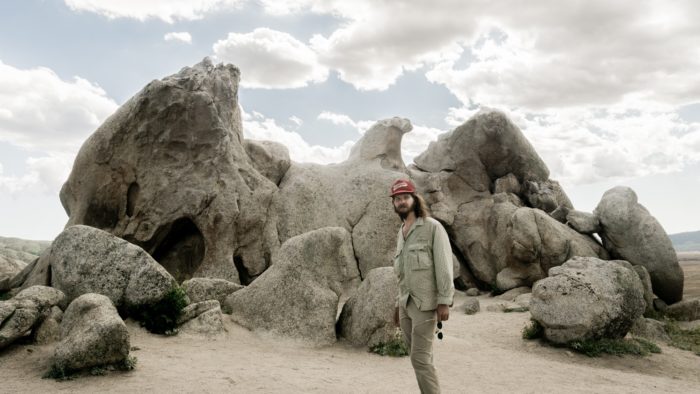 There are 12,790 feet of elevation gain over those 107 miles punctuated by the climb up to Mount Laguna.  Though the steepest and likely most memorable climb is the one out of Hauser Canyon.  It is 1,200 feet up, all exposed.  Those doing the border to Lake Morena in one day will hit this climb after already doing 15 miles on their fresh but untested legs and it will likely be in the heat of the afternoon.  Apart from those two climbs the average grade of 5.7% makes this a good section to get your legs.  It is one of the flatter sections of trail with only the Hat Creek Rim section (California N) coming in flatter outside of Oregon. 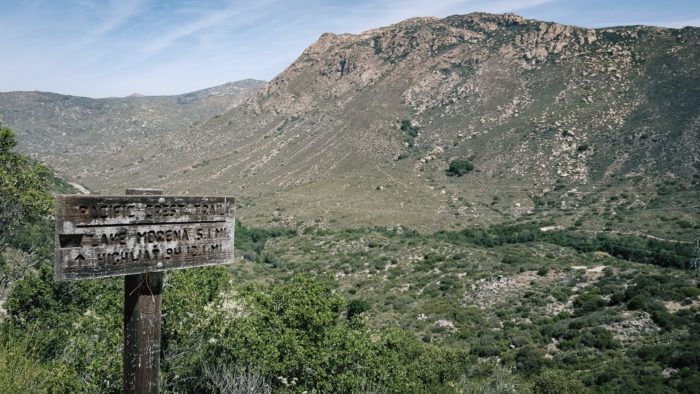 Two potentially long waterless sections should be noted.  The first long carry is right from the get go, Juvenile Ranch near the border to Lake Morena, 18.7 miles and the second is Rodriguez Spur (mile 68.4)  to Barrel Spring, potentially 32.7 miles.  The Rodriguez spur to Barrel Spring section does have Scissors Crossing with roads leading to Julian and Stagecoach RV as well as the 3rd gate water cache at mile 91.2.  As always it is worth mentioning water caches should not be relied on. 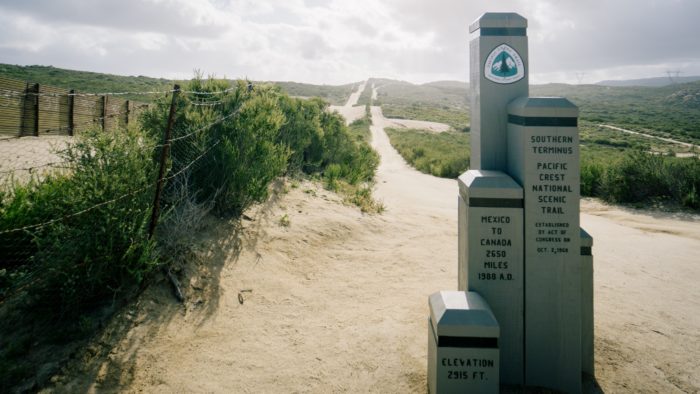 The trail gets started atop a geographically nondescript hill in the Laguna Mountains of the California Peninsular range.  Though to be fair the divide between the Laguna Mountains and the Sierra de Juarez is just beyond the wall some 10 miles to the south.  Not far east is the Laguna Salada fault where the Laguna mountains dry and flatten into the Colorado Desert section of the greater Sonoran Desert.  This feature with the trail atop a mountain range and desert/fault valley to the east is a defining characteristic of much of the trail through the Peninsular, Transverse, and Sierra Nevada ranges. 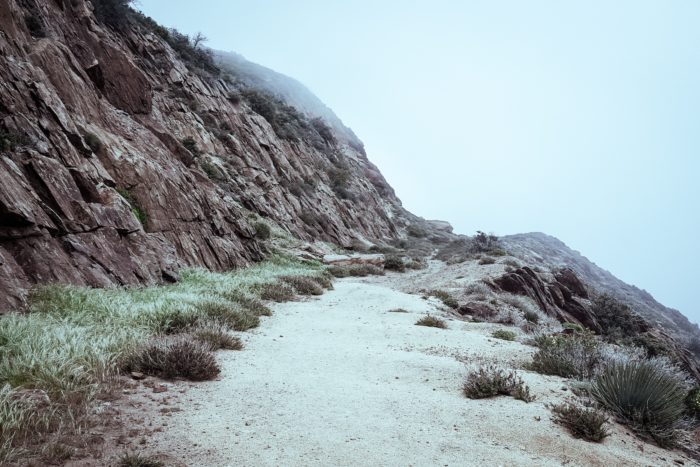 For the first 35 miles by crow, 77 miles by trail, the PCT follows the Laguna Mountains.  It drops into and out of Hauser Canyon on its way past the birding hotspot of Lake Morena.  Then it is up to and through the aptly named Mount Laguna, just to the west of the range’s high point of Cuyapaipe Mountain.  A stroll along the beautiful Laguna Mountain Plateau Rim past the popular hang gliding spot of Kwaaymii Point leads to the Rodriguez Spur water tank.  At this point the trail leaves the Laguna Mountains, venturing down into the San Felipe Valley and Scissors Crossing. 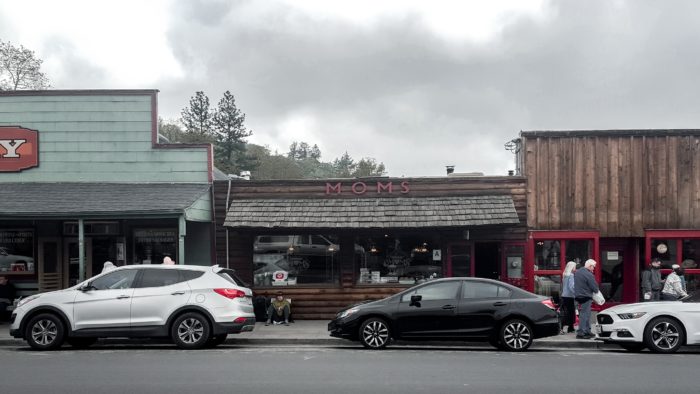 After Scissors Crossing at mile 77, with it’s roads to Julian and Stagecoach RV Park, the trail enters the San Felipe Hills.  The most impressive selection of cacti on the trail.  22 miles of beautiful, diverse succulents later comes Barrel Spring at mile 99 which is roughly where the trail drops back down into the Valle de San Jose. 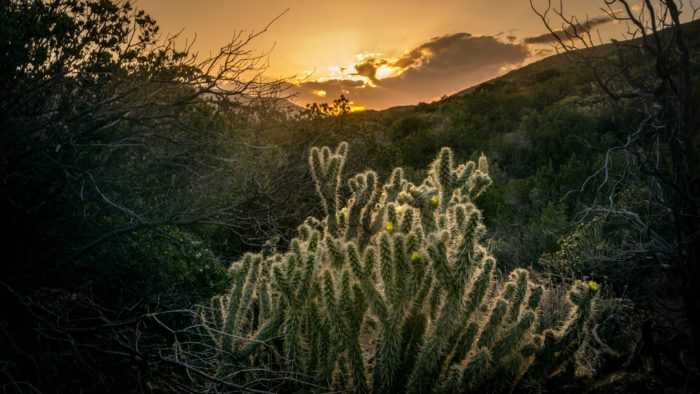 From here it is a quick meander through a few meadows, past Eagle Rock (It can be missed because it just looks like another rock pile from the trail), down an oak lined creek and onto Warner Springs at the northern end of Section A.  That is 107 miles and the first section of trail down. 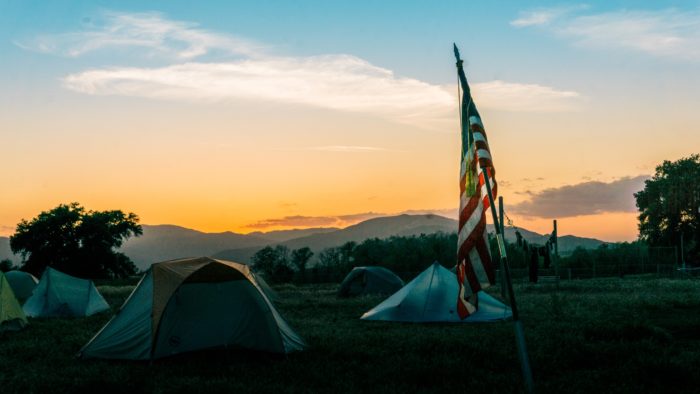 Kickoff is officially a thing of the past.  Be familiar with the LNT principles they pushed.  Have and know how to read a timely water report.  Don’t feel pressured into doing the border to Lake Morena on day 1.  Guthooks does not mention it but dispersed camping is not allowed in the Laguna Mountain Recreation Area which is roughly 11.5 miles from mile 41.2 to mile 52.6.  Halfmile does include this information in the notes.  That leaves Burnt Rancheria which doesn’t open until May and Laguna Campground as the only two legal places to camp.  (Laguna Campground had a designated camping area for PCT hikers in 2016.  The site numbers were posted at the northern entrance to the campground.  The showers are off at Laguna Campground as of 2/28/17 due to construction).  Immediately after the no camping zone the rim starting at mile 52.6 to around mile 62 is notoriously windy, it might be a good idea to shoot for the mason valley truck trail or farther down the valley to get out of the wind.  Warner Springs is incredibly hiker friendly and makes for a great place to take a zero and rest any soreness before tackling section B.