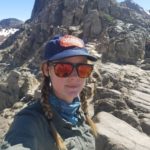 My first 6 days on the PCT

I awoke around 4:30 am after having only slept about 3 hours. It was the day before the day I was to start my trek from the Southern Terminus toward the Canadian border. I had booked the 7:20 train from Union Station in Los Angeles to San Diego where I was to stay at the Legendary Scout and Frodo’s.

As per usual I was running behind, stressed out of my mind, and hurriedly attempting to pull all my things together before leaving my home for 5 1/2 months. My dear friend had arrived at 6 am to drive me downtown to the train station. I was not ready. Feeling terrible that I’d dragged her out of bed at the crack of dawn, I apologized as I called to book myself on the next later train. That gave me time to really be sure I was ready to leave.

After calling an Uber I said some tearful goodbyes to my roommate and my cat, and off I went.

Scout & Frodo’s was such a delight. The perfect way to start the PCT. I met such great people there. There was David from Washington, Jeffery from San Francisco, Theresa & Steffen from Germany, Maya from Latvia, and so many others. We were fed a hearty meal, listened to some of Scout’s stories, and turned in early so we could leave the house by 6am the following morning.

In the shuttle out to the Terminus I got to talking with Jeffery and we agreed to hike to the same spot to camp that first night. This is how my little tramily began to form.

Day 1 on the PCT really could not have been better. The weather was a gorgeous 65° Fahrenheit with a light breeze, it never really got very hot (at least for this SoCal local). At the 1 mile marker I took a shot of schnapps with an Austrian couple and Theresa & Steffen. It was a fun little celebration for that first mile. I never did see that Austrian couple again; they were heading all the way to Lake Morena that first day.

I rolled into camp around 4pm after having sat with David in the shade for about an hour to avoid the worst of the heat and rest my feet. Jeffery was already there as well as three Dutch folks: 2 older men and 1 young woman who appeared to be closer to my age. Her name was Caressa. More folks began to roll in as I was finishing setting up my tent.

As everyone gathered to cook their dinners we swapped names, hometowns, and stories. There were about 20 hikers there that first night, it was nice to have some comradery.

I slept terribly that first night, this would not improve for another several days, but I got on trail by 7:00am and headed toward Lake Morena. Jeffery, David and I caught up with each other as we headed down toward the lake. We didn’t stop until we got to the general store where I inhaled a double bacon cheeseburger and fries.

We left Lake Morena in the afternoon and ended up at my favorite campsite of the whole trail. Caressa and one of the Dutch gentlemen joined us. We enjoyed a spectacular sunset.

Never in my life did I think the worst weather phenomenon I’d be dealing with on the PCT would be wind. The next several nights we were plagued by high winds. Jeffery and I camped just short of Mount Laguna and got almost no sleep because of the wind. However when we wandered into Mt. Laguna in the morning there was some awesome Easter Sunday trail magic. We were greeted with pancakes, coffee, and fresh fruit. It was a welcome sight after such a terrible night.

The next night Jeffery, Caressa, and I had a gorgeous campsite with another phenomenal view and sunset. It was at the top of a rocky ridge at mile 55.9. Caitlyn, who I met on trail that day joined our beautiful campsite. But the wind… oh the wind was monstrous. It started blowing so hard around 12am. It was pummeling my tent, my rain rainfly was flapping so hard making such a loud noise and in my drowsy state for some reason I thought my tent was the only one affected by the wind. I got up several times to adjust the rocks holding my rainfly. It was upon leaving my tent that I realized my companions’ Z-Packs tents were fully collapsed. So, I gotta give it up to Big Agnes for my tent withstanding several wind storms without snapping the poles.

None of us got any sleep so we packed up in the dark and we’re on trail by 5:00am. The sunrise from trail was a gorgeous one. That day pretty much solidified our little trail family, me, Caressa, and Jeffery.

I took on a Hermione Granger role in our little tramily: Always over prepared, doing a bunch of research, and generally steering the ship.

After a very hot day, we camped a few miles short of Scissors Crossing so we’d have easy trek to the road to hitch into Julian.

None of us had any experience hitchhiking, so it was interesting trying to get a ride at 7:30am. We waited for about 20 minutes before a man with a big white mustache in an even bigger truck stopped for us. He happily drove us into Julian telling us about the town and surrounding land as he drove. Julian Café, right in the center of town, is where he dropped us.

All up and down Main Street the sidewalks were lined with backpacks and trekking poles. It was the coolest, wildest, hiker-trashiest sight I’d ever seen. It made me so happy. The breakfast we had at the café was phenomenal. I ordered a slice of pie with my egg sandwich, the first of 2 slices of pie I’d eat in a 4 hour period.

Among the many things I never thought I’d find myself doing, draining and dressing a blister behind a dumpster is certainly near the top. But in the lovely town of Julian I found myself doing just that. I have a feeling there’s going to be more moments like this.

Before heading back out to the trail that afternoon we stopped into Mom’s for our free PCT slice of pie. The town of Julian was so incredibly hospitable. Literally every person from the town I interacted with was so supportive. When we were ready to head back to trail, Jeffery stepped out to the road while Caressa and I finished getting our packs together. Jeffery could barely get his thumb in the air before a white pickup truck pulled over and offered a ride.

We hiked just about 2 miles out from Scissors Crossing to camp in this narrow canyon that we figured should be fairly protected from the wind. Our German friends, Theresa and Steffen joined us a little later. We cooked our dinners in the beautifully lit canyon and turned in for what we thought would be a peaceful night.

Around midnight I was once again awoken by the wind battering my tent. I lay awake listening to the wind rolling around the mountainside, able to predict when and how strongly it would hit our little canyon by the sound it was making. This wind would continue to harass me…

Hi All! I'm Melissa, 2022 NOBO PCT hiker. Born and raised at the foot of the Sierra Nevada mountains, they've been the back drop of my life. My family spent our summers camping and hiking all over Northern California. Imagine spending 7 days tent camping with your parents and little brothers in Modoc & Lassen at 13 years old when all you really wanted to do was hang at the mall and movie theatre with your friends... Those experiences as an ambivalent teenager gave me the confidence as an adult to start hiking and backpacking on my own. In 2019 I hiked the JMT and thought my thru-hiking urge had been sated, but almost as soon as I'd finished I got the itch again. Follow my journey as I trudge toward Canada!