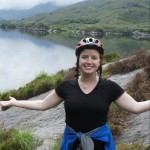 FAQ for the Worry Wart in Your Life

An actual conversation I had with my mother tonight went something like this:

Mom: Are you going to be sleeping in the trees?

Me: Am I going to climb a tree and sleep in it?

Mom: Not the big ones.

Thus, I’ve been inspired to write a “Frequently Asked Questions” for your worried loved ones.  You know, the ones who ask questions like “what do you mean alone?!!” at a decibel you didn’t know was humanly possible.  Or, another great mom anecdote, you’ve got the kind of parent that asks a question like “do they make a bear canister that you can fit into and still breathe?”…and she was serious.

I know, to a thru-hiker, or even aspiring thru-hiker, this is all kind of hilarious.  But these people really do care about us, and while we want to make snide comments about all of their concerns (oops), it’s really not fair.  So I’m making this FAQ to answer questions with real answers; the ones you’re tired of repeating after the sixth person.  Now, you can just refer them to this article, and they’ll get all of the honest answers they need to breathe easy.

What is the PCT?

PCT stands for Pacific Crest Trail.  It is a National Scenic Trail running from the border of Mexico to the border of Canada, through the wilderness of California, Oregon, and Washington.

How long is it?

How long will it take you?

Most thru-hikers complete the trail in 5 months.  The most popular start month is April, and most hikers will aim to complete it by October.  These months are for people hiking north from Mexico to Canada (or NOBO).  Very few people hike south from Canada to Mexico (SOBO) but those who do will start and finish later.

Wait, so you’re quitting your job?

This one is kind of personal, but it is still “frequently asked”.  The majority of thru-hikers will be jobless on the trail, while some are fortunate enough to work from home or for a company that will allow an extended leave-of-absence for soul-searching reasons.  Thru-hikers are a community of people who have made major sacrifices in their life to temporarily live closer to nature, so…yeah we’re quitting our jobs.  And that’s a scary thing to do, so don’t you dare belittle that decision.

Is the PCT well marked?

While the PCT is a wilderness trail, not a walk in the park, it is marked well enough that most hikers won’t get lost unless the trail is snow-covered (note that I said most).  Additionally, there are some awesome apps for trail navigation, and no one in their right mind would head into the wilderness without a map or GPS.  Here’s a great article about signage on the PCT.

Will you be alone?

Tons of people use the Pacific Crest Trail.  It would be very rare to go more than a few days without seeing another person!  Some people head out just for the day to hike a portion, and some are there to do the entire thing.  In 2016, 5,676 permits were issued for the PCT.  Chances are not all of those people actually set foot on the trail, but most of them did.  So no, we’re not alone.  There are also people called trail angels who choose to spend the day bringing smiles and goodies to tired hikers.  For example, in the middle of a long waterless stretch of desert, you may come across a huge cache of water and, if you’re lucky, soda and pizza.

How much will it cost?

This is largely personal as well.  If I stay in hotels frequently, eat at restaurants frequently, and purchase a lot of new gear, I may spend around $8,000.  On the other hand, if I stay out of towns except to resupply my trail food, and use gear I already own, I may only spend $3,000.  The average is somewhere in between.

Thru-hikers will walk through just about every weather system imaginable.  The desert will bring high wind and even higher temperatures.  The Sierra can bring snow, ice, or sunshine (she’s moody).  Oregon typically means wildfire smoke.  And Washington can make a grown man cry with her relentless, freezing rain.  Short answer: the weather will be like…weather.  But most hikers attempt to complete the trail during the more pleasant months.  Remember how the trail goes all the way up the country?  So the weather is as different as Mexico is from Canada.

How often will you be in a town?

Most hikers will resupply every 3-10 days.  Some areas have tons of options for stops, and some areas are long stretches of wilderness.  Typically, a town stop will mean updating social media, filling up on food supply, and charging any electronics.  If you don’t hear from your hiker in over two weeks, you can worry.

Can I come meet you for a section?

A lot of people do this!  However, I don’t recommend attempting this unless you train for it.  Keep in mind that your loved one will be out there hiking every day.  Once they get their “hiker legs”, they will be hiking big miles, and fast.  The trail has conditioned them in a way it will not have done to you.  A better idea might be to send them a care package, or meet them in a town for one day and watch them eat their weight in hamburgers.

Now, for the panicking…

You’re not going to hitch-hike are you?

In fact, most hikers do hitch-hike to get in and out of towns.  Many of the towns closest to the trail are flooded with PCT hikers in the summer, so they are very familiar with the concept of picking up hitch-hikers.  It doesn’t have the stigma of other towns further from the trail.  That being said, it is still common sense to try to hitch with at least one other person.  So unless you want to pay the bill for a chauffeur to follow your hiker from town-to-town, don’t fear monger about hitching.

The PCT does go through areas that many black bears call home.  Now, not to insult your intelligence, I just want to make sure we’re clear on something.  Black bears are not grizzly bears.  A grizzly bear will rip the door off your cabin, walk inside, help itself to your refrigerator, and have a seat at your kitchen table.  They may even use your telephone to call their aunt Susan.  Black bears are not those.  According to many thru-hiker accounts, the black bears that inhabit the PCT are skittish.  And the statistics back this up.  How many people have been killed by bears on the PCT?  Zero.

You know what’s scarier than bears?

Now we’re talking super predators.  Cougars are sneakier and less interested in your trail mix.  It’s also very rare to actually lay eyes on one.  That’s what is so scary about them: they stalk.  They are expert stealth masters of sneakiness, and if they do feel like attacking, you won’t know.  There isn’t much use in thinking about the risk of cougars.  How many people have been killed by cougars on the PCT?  Zero.

You know what’s scarier than cougars?

Your own body turning against you!!!????

Okay, so now we’re getting into the real dangers of the PCT.  I’m not sure why there’s so much hype about the wildlife when encounters with them are so rare, and aggressive encounters even more so.  The real threats on the PCT are the elements, and the way our fragile human flesh bags respond to exposure to said elements.  In the desert, you have the risk of heat stroke or heat exhaustion, dehydration, and severe sunburn.  In the Sierra, you have altitude sickness, avalanches, swift water crossings, and falling hundreds of feet off a mountain.  In Oregon, you often will face wildfires, or at the very least smoke inhalation.  And in Washington, you’re once again at the mercy of the snow, except this time it’s worse, and colder…hypothermia is a real risk.  Doesn’t all that sound so much scarier than bears and cats?  The good news is: a prepared hiker will have everything they need to survive these conditions.  Snow gear, sun protection, and maps or GPS to get them out of a pickle.

How can I talk you out of going?

For one, you probably can’t.  And two, you shouldn’t.  Your hiker has done so much preparing, saving, and training to have a shot at completing this beast of a trail.  Be proud of them.  Even making the decision to go, telling your boss, making big purchases… all of that is scary stuff.  So support them.  If your worrying will keep you up at night, ask if you can be a person of contact.  Offer to hold their extra gear and resupply boxes, and send them when they need them.  This way, you’ll play an active role in making sure their hike is successful, and you’ll get updates on how far along they are.  Ask them what items they’d like to receive in a care package, and send those along the way.  And when they finish the trail, be ecstatic for them, not relieved that they survived.

And one more thing: if your hiker is a woman, examine whether you would ask the same questions and have the same concerns as if they were a man.  Because that shit is annoying.

My name is Sydnee. I was once voted "Most Likely to Survive the Apocalypse". I am a PCT 2018 hopeful.