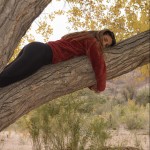 Over a week has passed since I began my journey on the Pacific Crest Trail. The miles have worn down at my feet, but the tramily I have managed to integrate myself with has boosted my spirits. Together, we slowly take on one of many deserts, eager to reach our first ‘sky island’: the San Jacinto massif.

I heard camp awake around 7 am and grudgingly released the valve on my therm-a-rest. I slugged my way down to the spring half a mile away from camp only to be rewarded with brown, sulfuric egg-water. The tramily started the climb towards Mike’s Place, a water tank and re-charge station for thru-hikers. Prior to starting the day, we lurked on FarOut (Guthook Guides) only to find the top comment on Mike’s Place to be “Be careful if you’re a girl.” That was enough to scare me into being Adam’s shadow. When we reached Mike’s Place I felt comfortable enough with my posse of body guards to indulge in a long lunch break in front of the water tanks. Aaron consumed a concoction of tortillas, peanut butter, packaged tuna, and summer sausage. Australians are a whole other breed.

Some fellow thru-hikers continued down the dirt road to the true Mike’s Place, and moments later we heard gunshots. Upon further examination, we found that our fellow thru-hikers were shooting guns at metal cans. Regardless, the sounds of gunshots was enough to startle us into moving our achy legs north.

My tail started wagging when I got a glimpse of the San Jacinto massif looming in the distance, and I really started moving those little corgi legs. I thought I was flying, but the big dogs caught up the moment I stopped to call my friend. How do men move so fast? 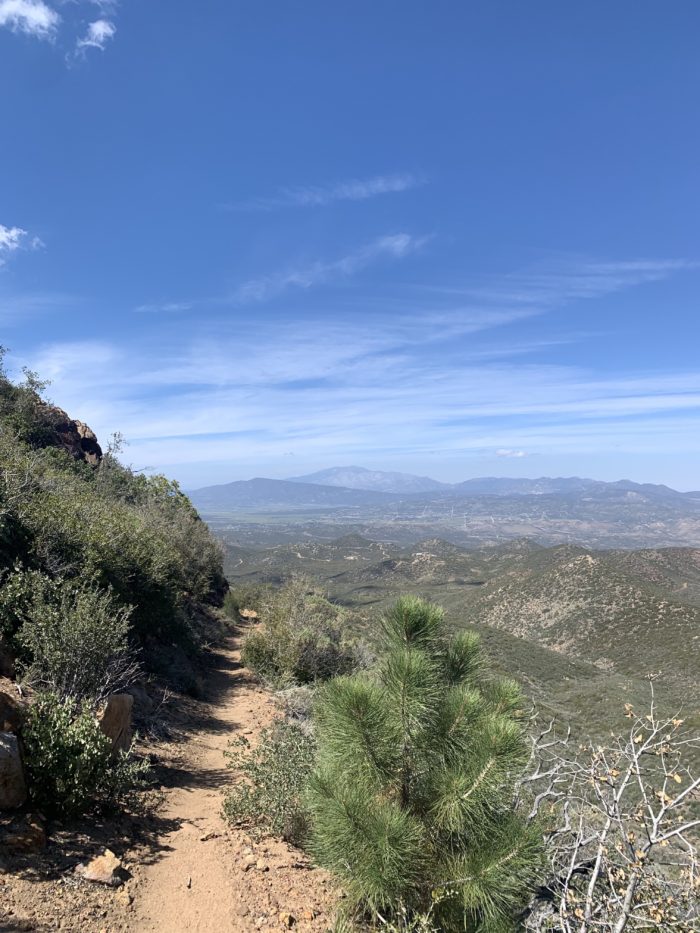 The tramily didn’t get out of camp until 8:30 am. If we tried hard enough we could all get out in 30 minutes, but many of us are preoccupied with sitting and staring at our gear instead of actually packing it up. I hiked north with two young guys, slightly overwhelmed by their machismo. The conversation topics varied between guns, violence, war, and women. The climb through the desert was incredibly brutal, and my feet had finally reached their breaking point. It felt like I was walking on LEGOs.

Around noon the clouds rolled in, providing a (slightly) more enjoyable hike to Mary’s Place. When we reached the water tank, a bubble of hikers had convened for a long lunch break under the picnic gazebos provided by Mary. During our lunch, our tramily was affirmed by fellow thru-hikers that we were one of the most entertaining tramily’s out there.

I headed out of Mary’s Place alone. According to an entry in Mary’s trail log: pain is inevitable, suffering is optional. I don’t buy it. There’s something about the sensation of walking on pins and needles that gets to your head, regardless of how strong your mindset is. Maybe I’m just weak. In any case, I started running, I’d rather the next 7 miles of agony last an hour and a half instead of three.

I caught up to the tramily just before hitting mile 150. There were collective whimpers as we spotted the trail ahead, hundreds of feet higher than we currently were. Our leader, Safety Jim, asked me to remove the 2 L bladder of water from the back of his pack. The tramily warned me that he may take off, forcing me to haul the weight up the hill myself. Instead, in one single motion, he snagged the Platypus bladder, took a few swigs, and dumped the rest of the water on the ground. Then he flew up the hill. A true genius right there.

We finally achieved a glimpse of the road to Paradise Valley Cafe when we crested the hump. As we quickly descended the last mile, a fellow thru-hiker, “Hardbody,” came flying around a corner with a huge grin on his face, sharpening trail maintenance knives that he had found further down the trail. Adam and I took one glimpse at the knife-wielding youngster coming at us and turned our asses right around, thinking this would be our demise. Thankfully it wasn’t, and we lived to camp another night in the field behind Paradise Valley Cafe, and mooch off their electricity after the sun went down. 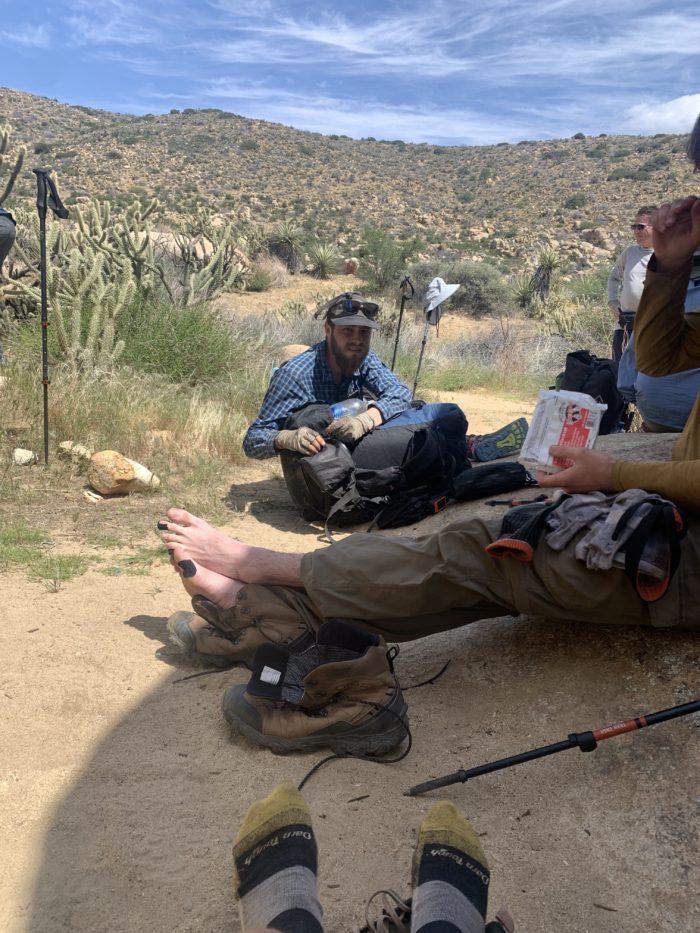 Adam is not amused with the desert. I don’t think any of us are. 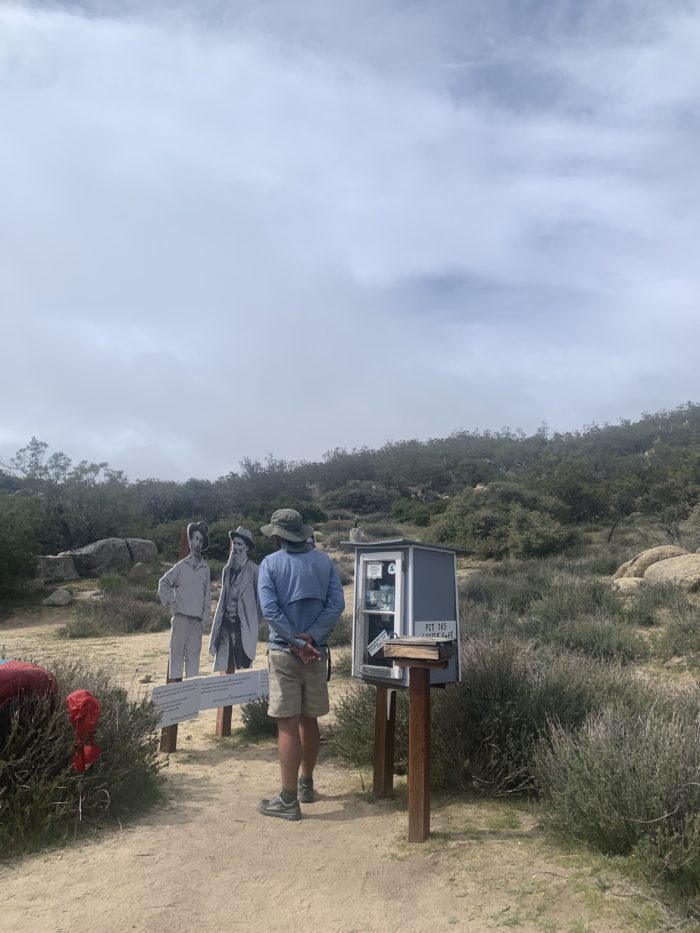 The trail library at Mary’s Place. Justin looks studious as he analyzes the Muir and Thoreau quotes. 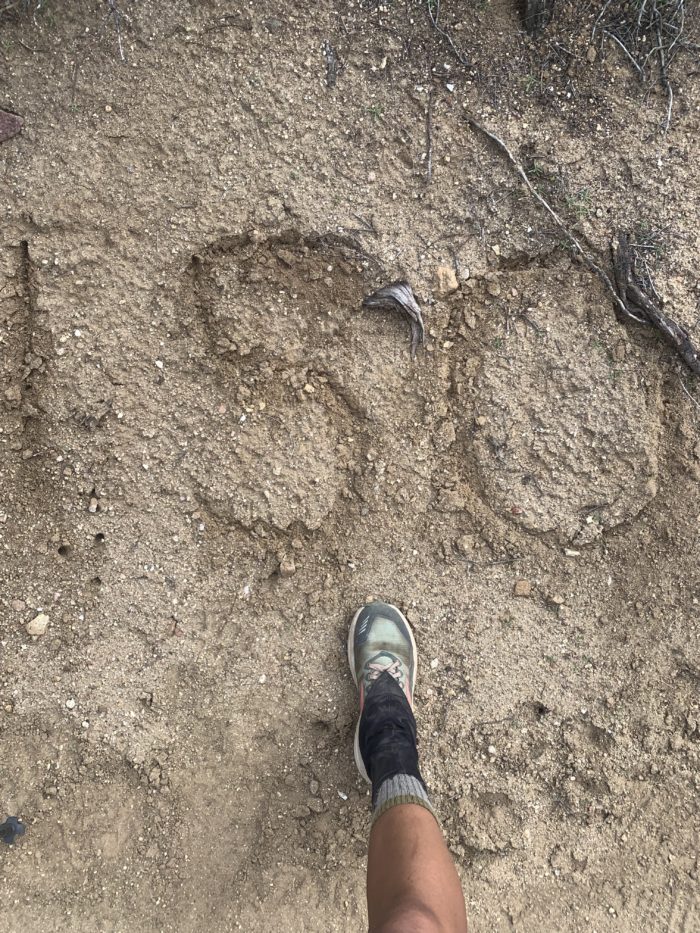 My name is Rachel (Russell the Wilderness Explorer). I begin my 2022 thru-hike of the Pacific Crest Trail on March 23rd. A San Diego native, I just graduated high school and love all things outdoors, with a particular affinity for rock climbing, alpinism, photography, and backpacking. I consume far too much vegan beef jerky and kombucha on a daily basis.