Why You Should Section Hike the PCT

Or, why semantics are silly and you should just get on the trail.

For those who are new to this (or mostly, for my dad), let’s define some terms: most will agree that a thru-hiker is someone who completes an entire long-distance trail, and those who complete less are section hikers (or, in my case, long-ass section hikers).  From there, it gets tricky, and people start arguing about details.  Some purists will say that a thru-hiker should complete the trail in one consecutive push, while others note that it can be completed in several stints.   (The Appalachian Trail Conservancy, for example, considers anyone who has completed the AT in 12 months a thru-hiker.)  Some say you have to walk in a straight line (consecutive footpath) without any skips or flips, while others dispute this.  The nitpicking goes on, and in my opinion, this is a bit silly, and detracts from the major points: thru-hikers, and long-distance hikers in general, are awesome.  Rather than arguing the semantics of who is who and what is what, I think we should focus on the fact that the people who are drawn to long-distance trails—whether they do it all at once, hike fast or slow, hike 75% of it, flip-flop it, or take a few years to do it—are more alike than they are different.  Though we come from all over the world and differing walks of life, we’re all united by a drive to do an incredible (and somewhat crazy) thing: to put our essential belongings in a backpack and walk for months at a time, to keep putting one foot in front of another despite bad weather and injuries and exhaustion and the absurdity of it all.

Though I initially had hoped to be able to complete the PCT in a single, four-month trip, I quickly realized this wouldn’t be possible: I wasn’t able to get a full four months off work, and would also need to spend several weeks in October interviewing for medical fellowships, which occur only once a year, inconveniently in the middle of the SOBO season, in September and October.  Within these confines, I made plans to hike as much of the PCT as I could during the 2.5 months of time I had, and I can now say I have zero regrets and think it might have even been for the best.  While I started at the border just like the other SOBOs and hiked south for 11 weeks, I was also able to more easily tailor my hike to my schedule, allowing me to take a week off for the medical boards and have friends join me along the way.  Doing reasonable mileage (25-28 miles a day) meant that I could hang with the thru-hikers and cover enough terrain that I will be able to complete the trail someday, but is also somewhat exhausting.  By two months in, many of my friends were so tired they were having trouble enjoying the trail; because I had a planned exit, I was able to savor each moment more easily than those who still had two months ahead of them. 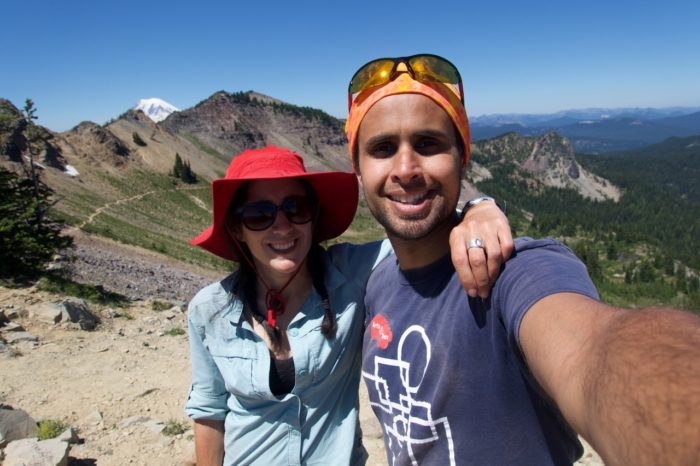 My friend Akash was able to join me for eight days in Southern Washington, which might have been tough if I’d been on a strict timeline.

So, why should you consider a section hike instead of a thru-hike?

Time: Most thru-hikes of the Big Three require four to six months to complete, which many folks will be unable to do because of financial/career/family reasons.  Rather than postpone your hike or await a hypothetical future in which you may finally have enough time, try to get on trail as soon as possible to do a shorter section hike.  Or consider one of the many fantastic shorter thru-hikes this country offers (the 485-mile Colorado Trail is at the top of my list).

Money: It goes without saying that you won’t need to save nearly as long for a two-month hike as you would for a four-month hike

Energy/enjoyment:  This is the most intangible but perhaps the most important.  Something happens when you’ve been hiking on the trail for a long time.  You start taking fewer pictures.  The views seem less spectacular.  You start focusing on the goal, rather than the destination, and start feeling immune to the experience.  (On one such occasion, I was so focused on getting to camp by 7:30 p.m. that I ran through a gorgeous sunset without enjoying it as much as I could.)  For many, it’s the exhaustion (the toll on the body seems to be cumulative; it sadly doesn’t get easier), for some, it’s something else.  But for whatever the reason, and much to my surprise, several very strong hikers quit in the 1,500-2,000 mile range.  One thoughtful southbounder who I walked with in Washington summed it up well in his final Instagram post from the trail: “I have decided to leave the PCT after having come as far as Kearsarge Pass.  Nothing terrible has happened: I have been doing well, cruising through the Sierra Nevada, which are stunningly beautiful and a wonder to walk among.  However, I have recently found myself quite desensitized to my environment, traveling without truly appreciating the minutiae of the experience.  When coming over spectacular passes above 11,000 feet, I hardly blinked at the scenery, content to keep walking.  It  seems a waste of time and disrespectful—to the trail and to myself—to finish with a lack of the attention I had for previous sections of trail.”   Does section hiking save you from this?  Well, probably not completely—nothing will stop the physical and mental fatigue that accompanies hiking all day for several months—but I thought it allowed me to better enjoy the trail through the haze of exhaustion.  Because I knew my journey had an ever-approaching endpoint, I felt more able to enjoy each day.  It’s understandably harder to do that when you’re two months in and have two months (or more) to go.

Break the rules: When you’re actually thru-hiking, it’s easy to get caught up in the semantics I write about above.  If I was doing a whole thru-hike, I likely would have tried to do a continuous footpath, which would have prevented me from hiking with my amazing trail family for as long as I did.  I would have fallen far behind them when I took a week off to take the medical boards, and probably wouldn’t have caught up again.  Because I knew I wasn’t going to finish the trail anyway, I skipped ahead to keep hiking with them and don’t regret it an ounce.  (I’ll eventually go back and finish the skipped section.) 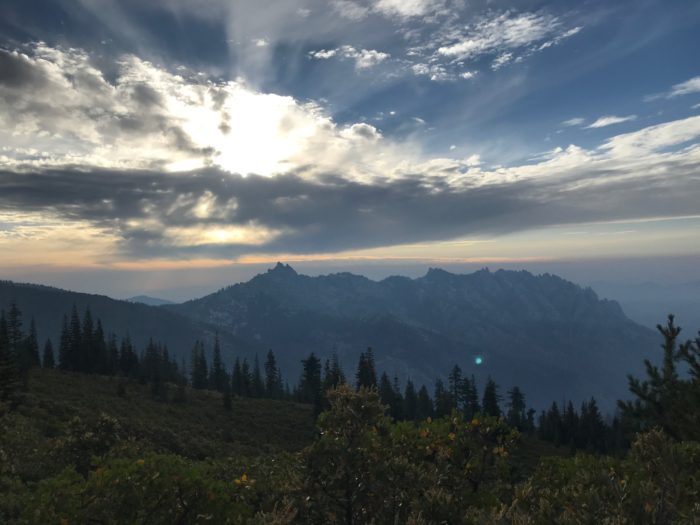 Castle Crags wasn’t really on my radar during the planning process, but was unbelievably stunning, despite a major fire in the area.

Why should you keep the mentality of a thru-hiker?

Hike long days: Don’t let the fact that you won’t complete the trail in one trip get you down.  One of the joys of thru-hiking is seeing the land change over time, and to do this, you need to make the miles.  Hiking long days will also greatly increase the possibility that you will someday complete the trail (even if it takes you a few years).

Hike long sections: Get as much time off as you can.  Hiking for several weeks in a row allows you to step away from the constraints of everyday life in a way that shorter trips won’t (e.g., getting away from the constant intrusion of the news cycle was one of my favorite things about the trail), and will also allow you to get your trail legs.  After a few weeks, you’ll notice that the hiking gets better.  It doesn’t get easier, exactly, but you’ll notice that you’re able to do more miles per day for roughly the same amount of energy. Hiking long sections at once will also substantially improve the logistics of your hike: it turns out that getting to/from random trailheads in the middle of nowhere can be complicated, and you’ll have to do less of this if you just walk there.

Don’t pick and choose the “pretty” sections: Part of the joy of long-distance hiking is finding the beauty in all the in-between places, places way off the beaten path that you otherwise wouldn’t bother with going to.  I know that I’ll go back to the Goat Rocks someday, but there are also a million lesser-known areas I’ve come across—a beautiful camp spot here, a scenic water source there—that I’ll miss nearly as much because I know I probably won’t go back  (e.g., though NorCal is not known to be a PCT favorite, I found much of the terrain between Etna and Castle Crags delightful and stunning).

Embrace your inner (and other) hiker trash: When I get asked about what surprised me the most about the trail, it’s an easy response: the people.  While the scenery was superb, it was my fellow hikers who truly made the experience.  Doing a big chunk of trail at the same rate as thru-hikers makes it much more likely that you’ll be able to fall in with these amazing folks. 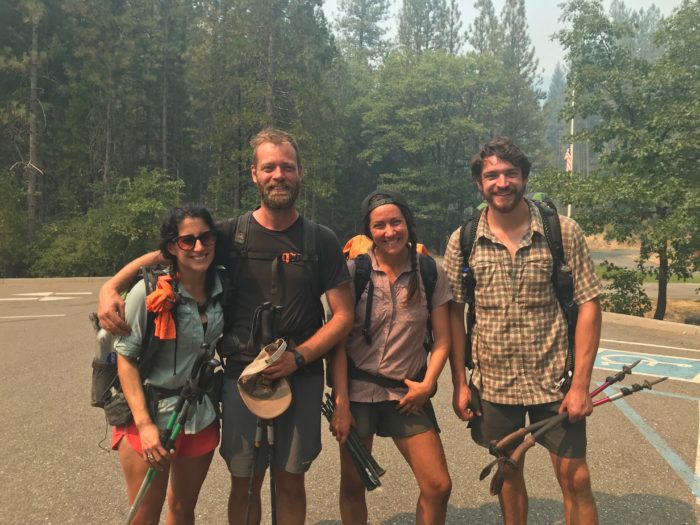 My trail family was the best of all trail families, and despite the fact that only one of us completed the PCT this year, I think we’re all pretty awesome, and am super psyched to tackle the desert section with the other two this March.

I don’t want to diminish the accomplishment of completing a thru-hike.  If anything, after my time on the trail, I feel even greater respect for those who complete the journey in a single go.  But I’ve also been pleasantly surprised to discover what an amazing experience section hiking can be, particularly when one takes on the mind-set (and mileage) of a thru-hiker.  When you’re getting started, the PCT can seem like a single-outcome game of 2,600 miles or bust, but I’ve found that the “winning” in long-distance hiking is in the journey, and sometimes the sweet spot lies in between. 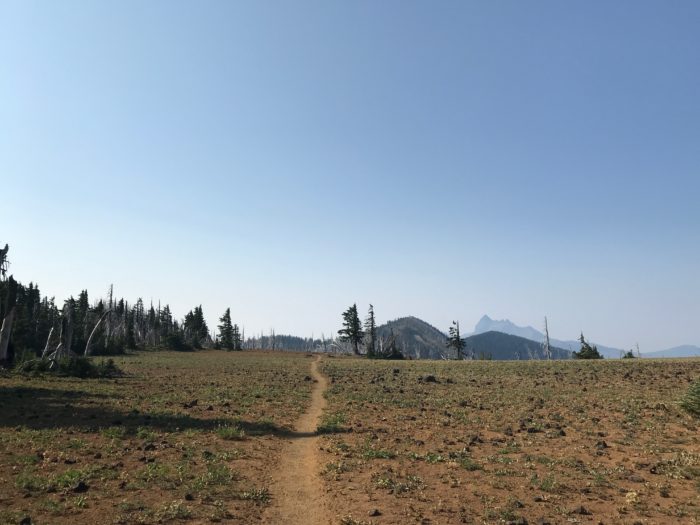 Looking forward to living to hike another day!