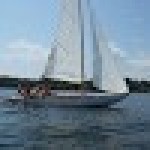 The Sierra’s, Gear, and a Decision to Skip

Unless you’ve been living under a rock (or on the East Coast), I’m sure you are aware of the epic snowfall the Sierra Nevada’s had this past winter. Having just spent six and a half days hiking from Kennedy Meadows out to Independence through Kearsarge Pass, I can assure you that a lot of it is still there.

This was the most beautiful, most difficult, and most remote section of the trip so far. We had to switch up our hiking strategy that we had established in the first 700 miles of this journey. We also had to add a lot of new gear. 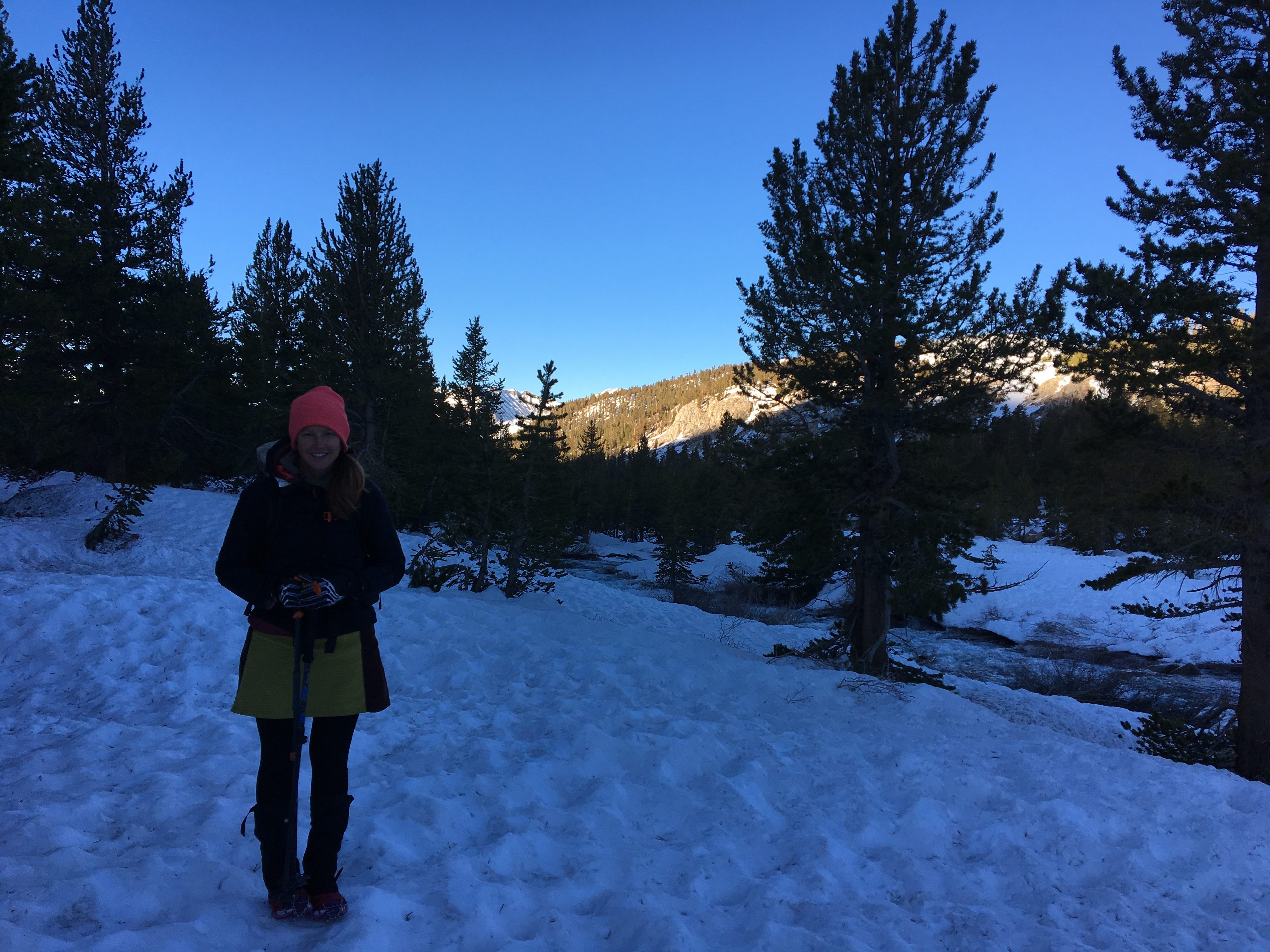 A-Game wearing every article of clothing she has with her in the morning before the sun came up.

Our biggest hurdle was trying to get enough miles under our belt before the snow started turning slushy and became impossible to hike on, which occurred around 10 am (although the last day I was out there I postholed at 7:15 am). We set our alarms for 3:30 am to be hiking by 5 am, not unlike the desert. Except in the desert it was easy to complete 20-25 mile days. In the Sierra’s, we would hike for 12 hours and make it a mere 13 miles.

There are several reasons why our mileage dwindled.  Walking in suncupped snow in the afternoon was discouraging and slow- we averaged about one mile per hour during these times.  But even when we could cruise on early morning crunchy snow, we had to stop often to find the route and to put on or take off our microspikes.  Additionally, every time we reached a stream crossing we had to spend a lot of time finding the safest place to cross.  Lastly, whereas in the desert we walked for most of the day solo and met up during breaks or lunch, in the Sierra’s we stayed in a group which meant that everybody had to stop whenever one person needed a break. 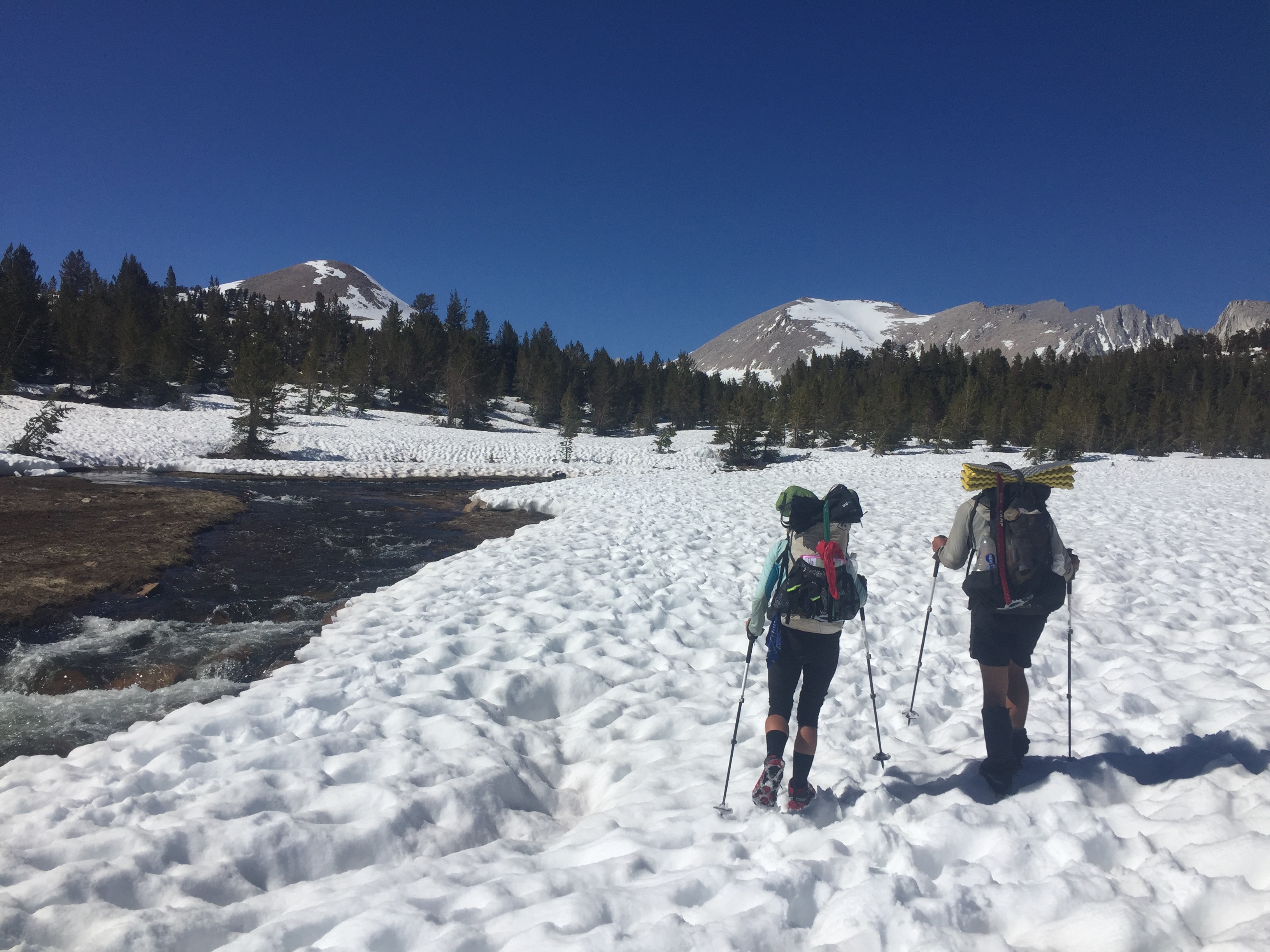 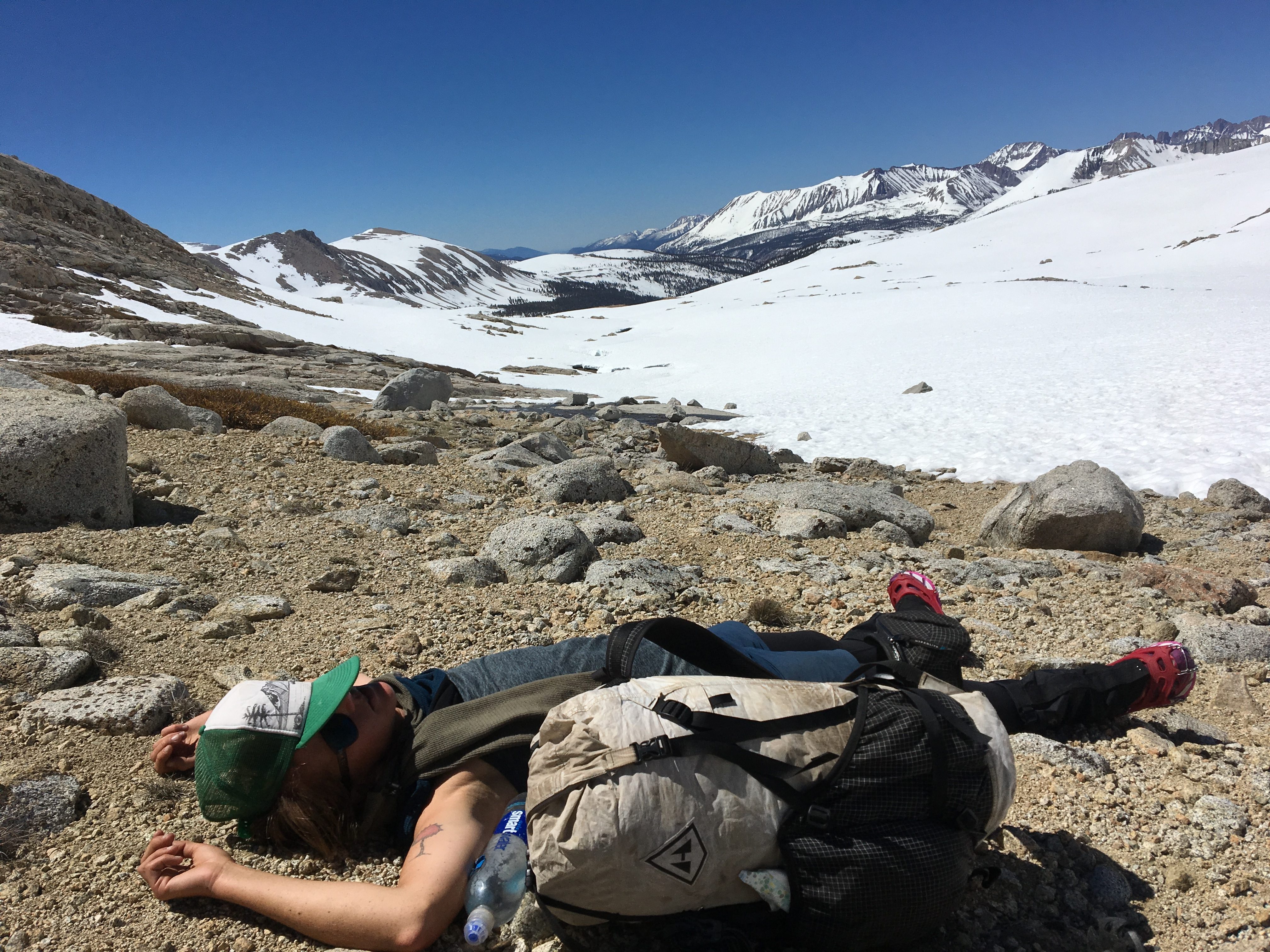 How A-Game feels after waking a few miles on afternoon snow.

Our major concerns were getting safely over the passes and safely across stream crossings.  I’m going to go through each one of these hurdles from the beginning.

Rock Creek is the first river that we had to ford.  We arrived around 6 am and found a large blowdown downstream of the summer crossing which we ooched our way across on our butts.  Others in our group went upstream and forded the river. 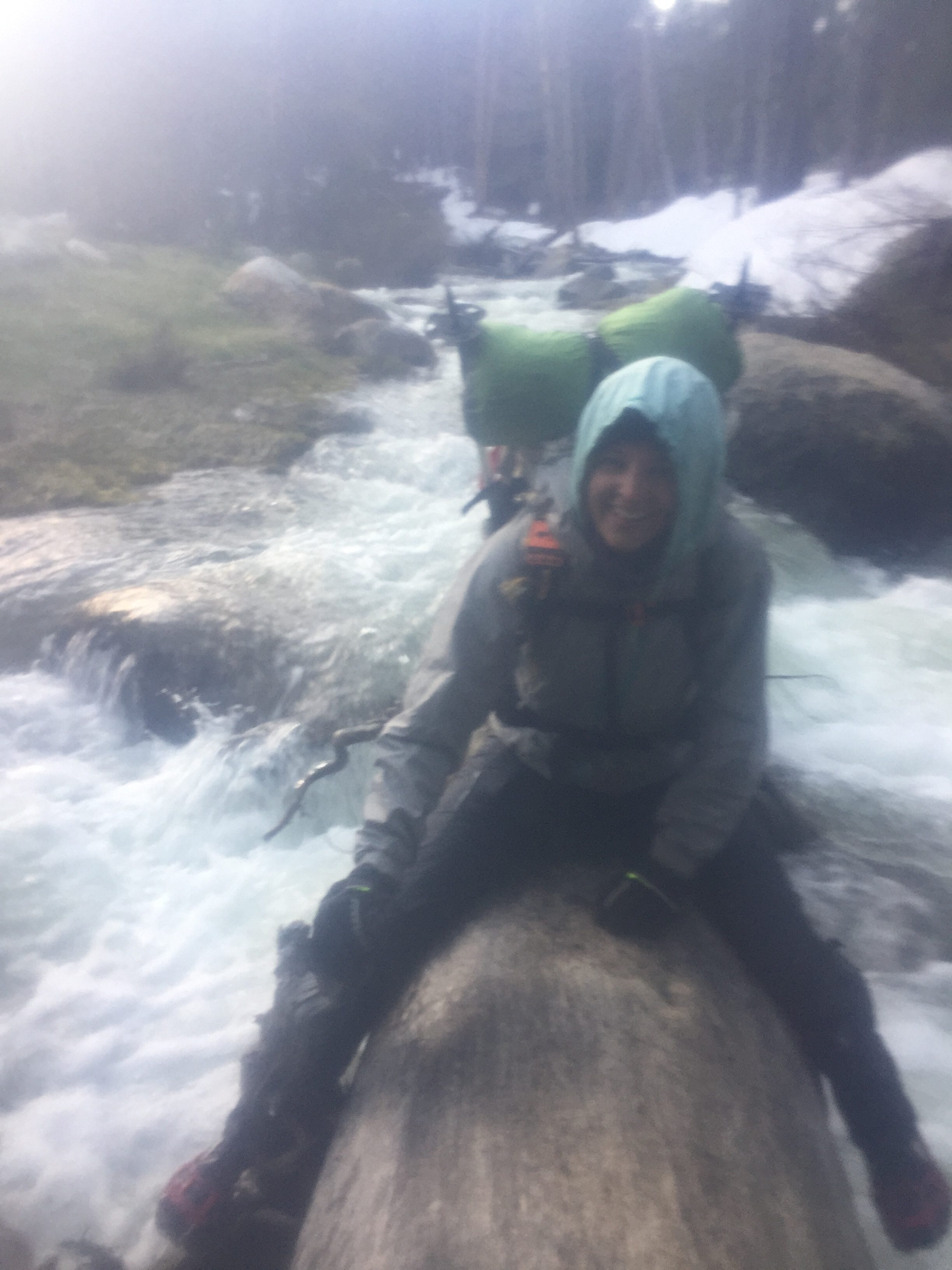 Ooching across Rock Creek in the early morning.

This turned out to be an easy rock hop.  I would not worry about this one.

Whitney Creek is the last crossing before the junction to climb Mt. Whitney. For us, it was an easy noon-time log crossing. 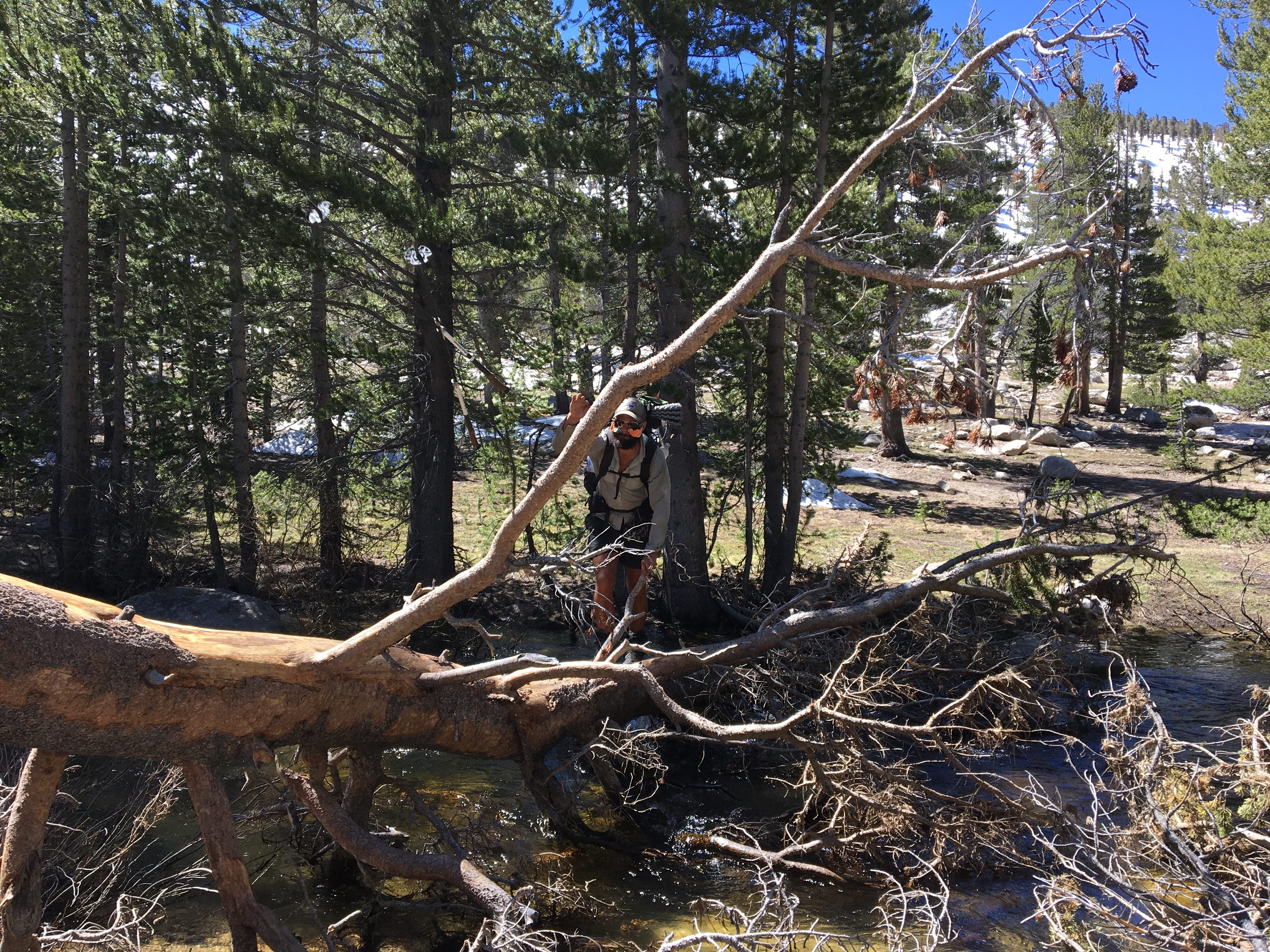 This was a low-current ford which we probably arrived at in the early afternoon.  Also not a concern. 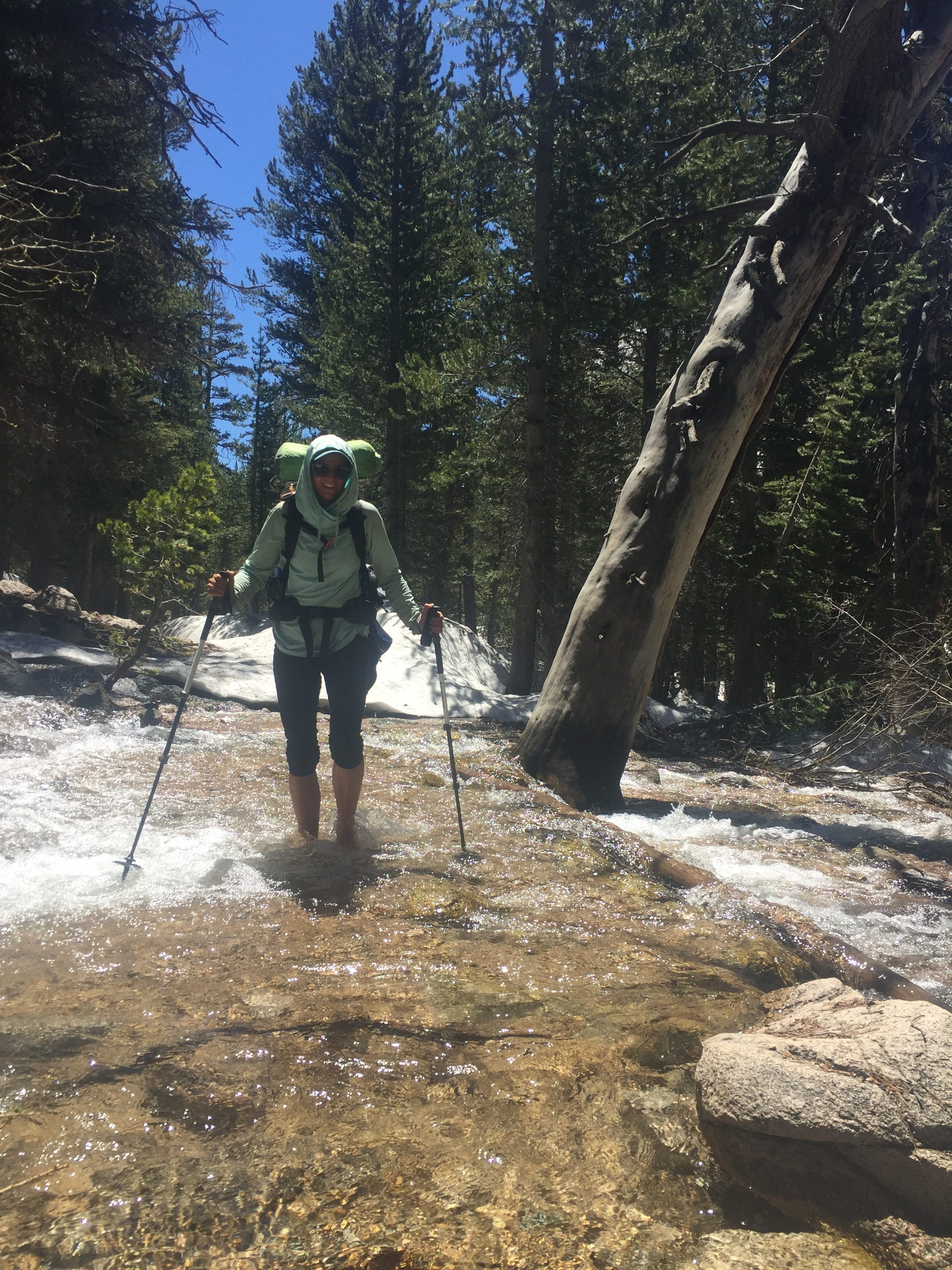 Wright Creek ended up being the most serious Creek we had to cross.  We walked almost a mile upstream until we found a fellow hiker on the other side who pointed out where he has crossed.  We each took turns and kept our shoes on to ford the river, but the current was strong and I would recommend spending extra time considering when and where you want to cross this one.

We passed a SoBo hiker the previous day who gave us intel on a snow bridge far upstream at Tyndall Creek.  We made our way up there and spent a while deliberating on its safety before safely make it across one by one. 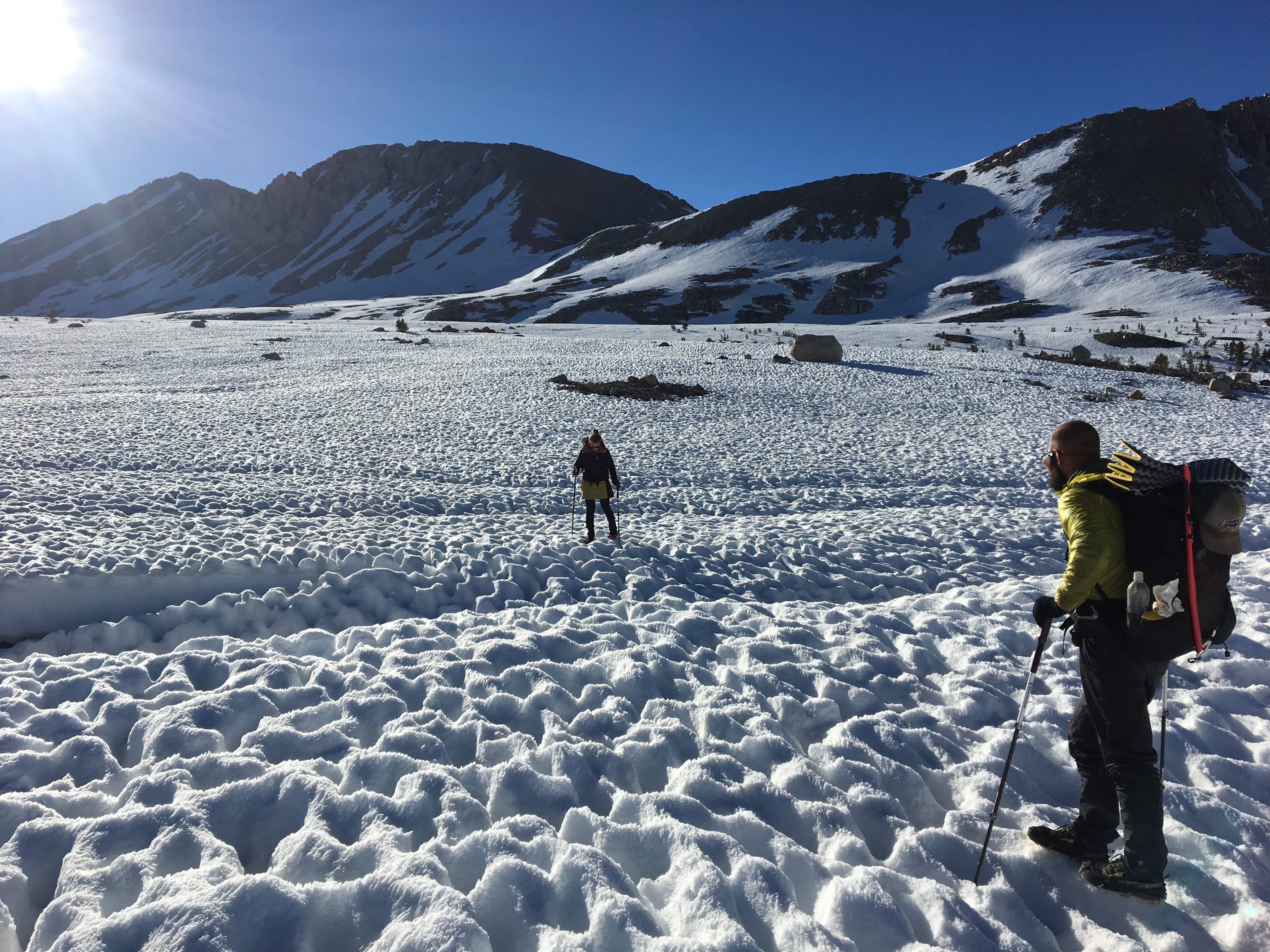 Many fellow hikers told us to hit the passes in the morning, which we did and it turned out really well.  We camped right below Forester Pass and had an easy early morning climb over the next top and a fairly easy time descending on the hard bootpack. Sunrise on the top was stunning. 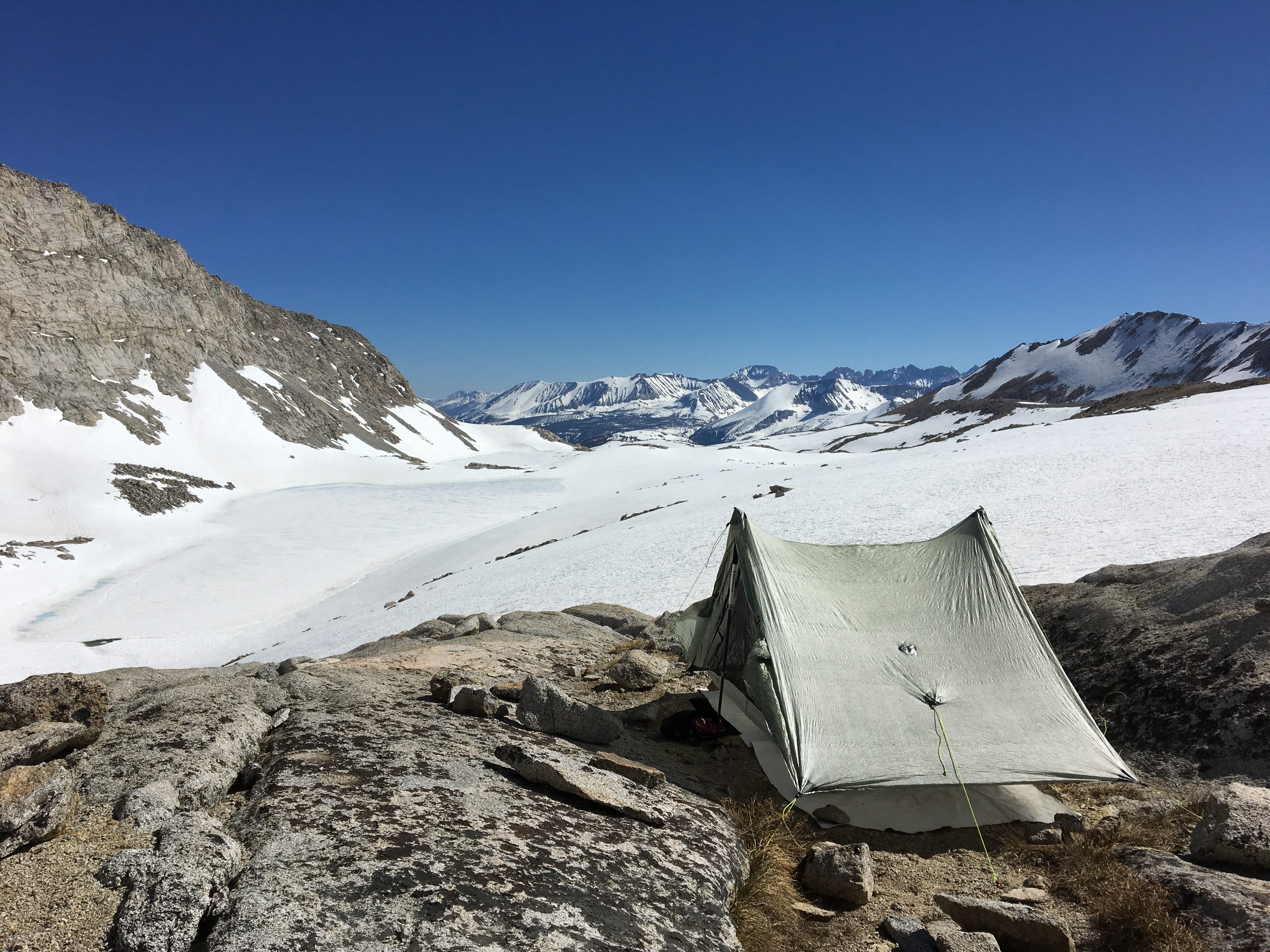 My campsite the night before going over Forester Pass. 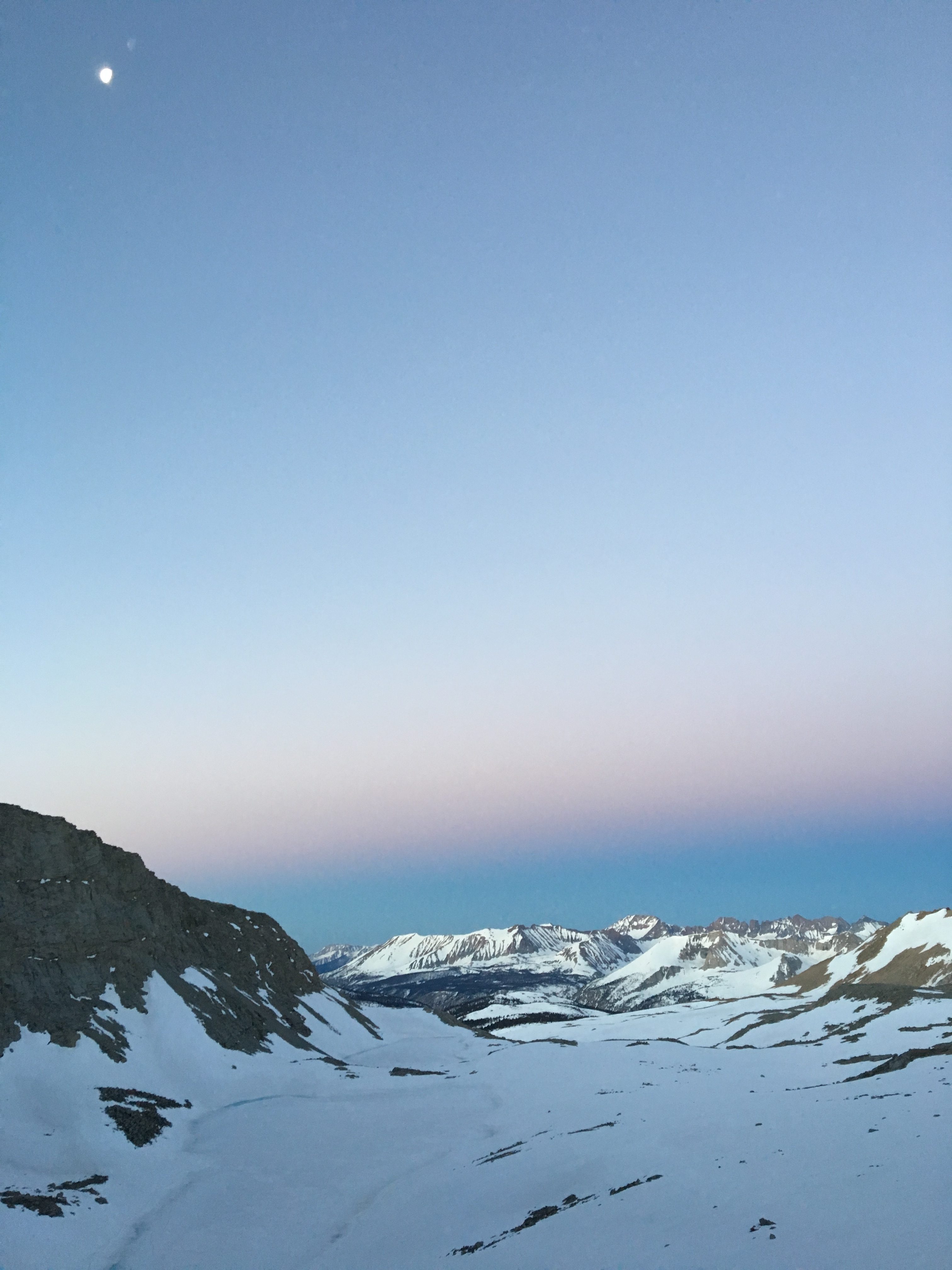 Sunrise on the way up the Pass. 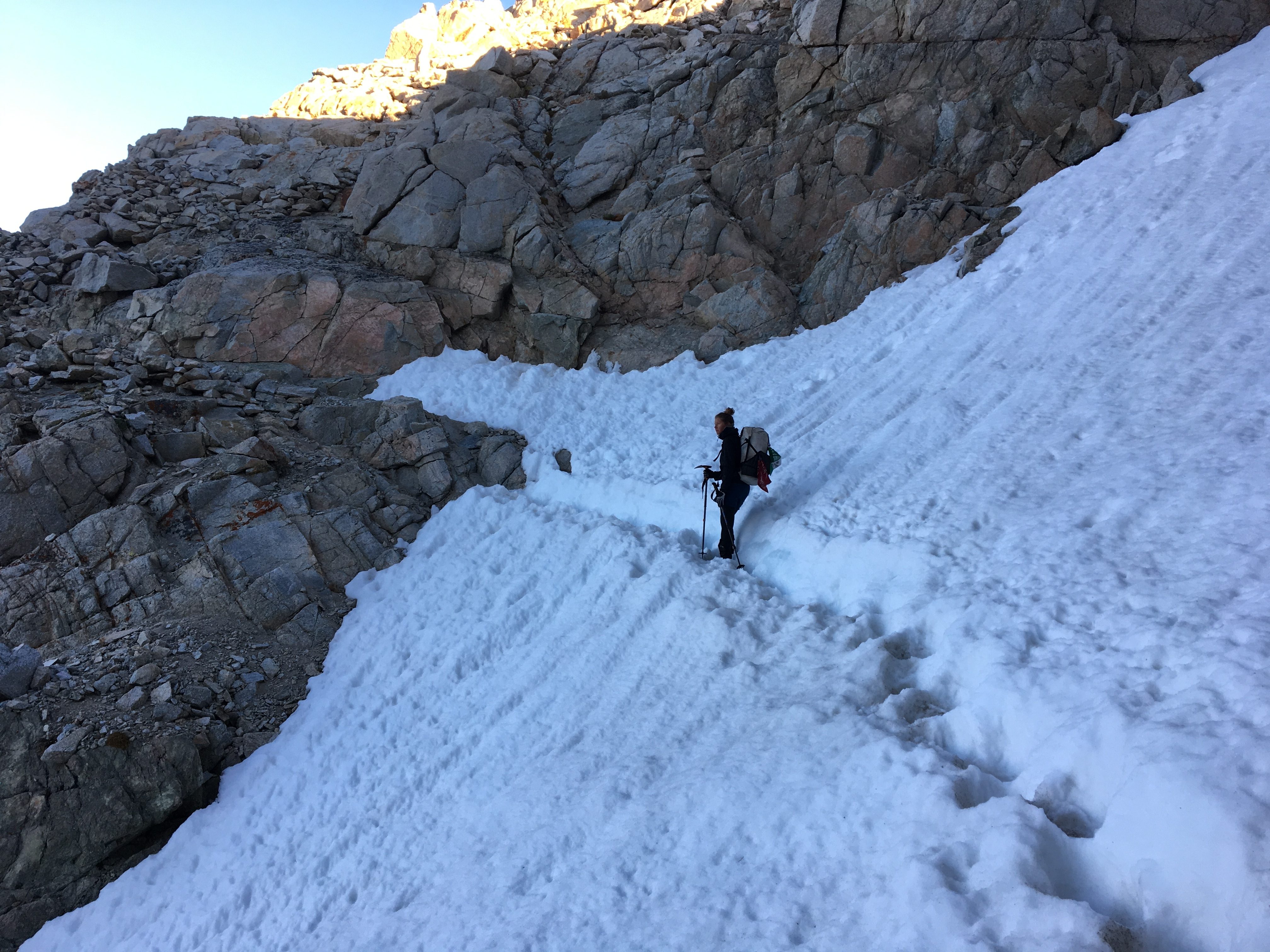 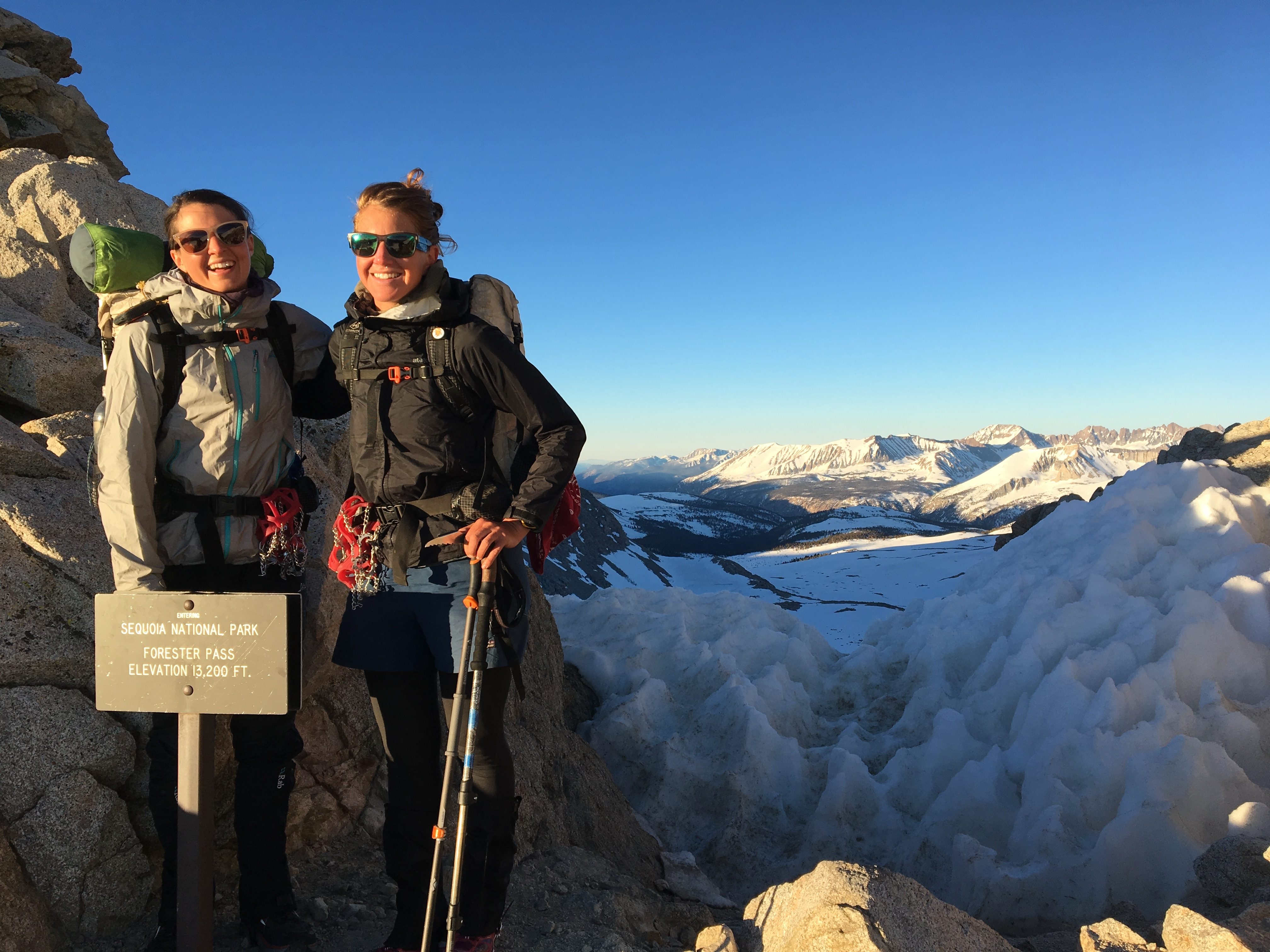 This crossing is really on a tributary of Bubb’s Creek.  My group chose various downed logs to cross on or places to ford. This crossing should not be an issue.

Kearsarge Pass is not actually on the PCT, but it’s necessary to go over if you want to get to the Onion Valley trailhead to make it to Independence.  Again, we camped right below the pass in order to go over early in the morning, but the only clear and flat-ish place we could find was on the actual trail itself, so we slept under the stars right on the switchbacks. Going over the pass was easy, and again beautiful with the early morning sunrise. We followed hardened bootpack on our way down the other side. 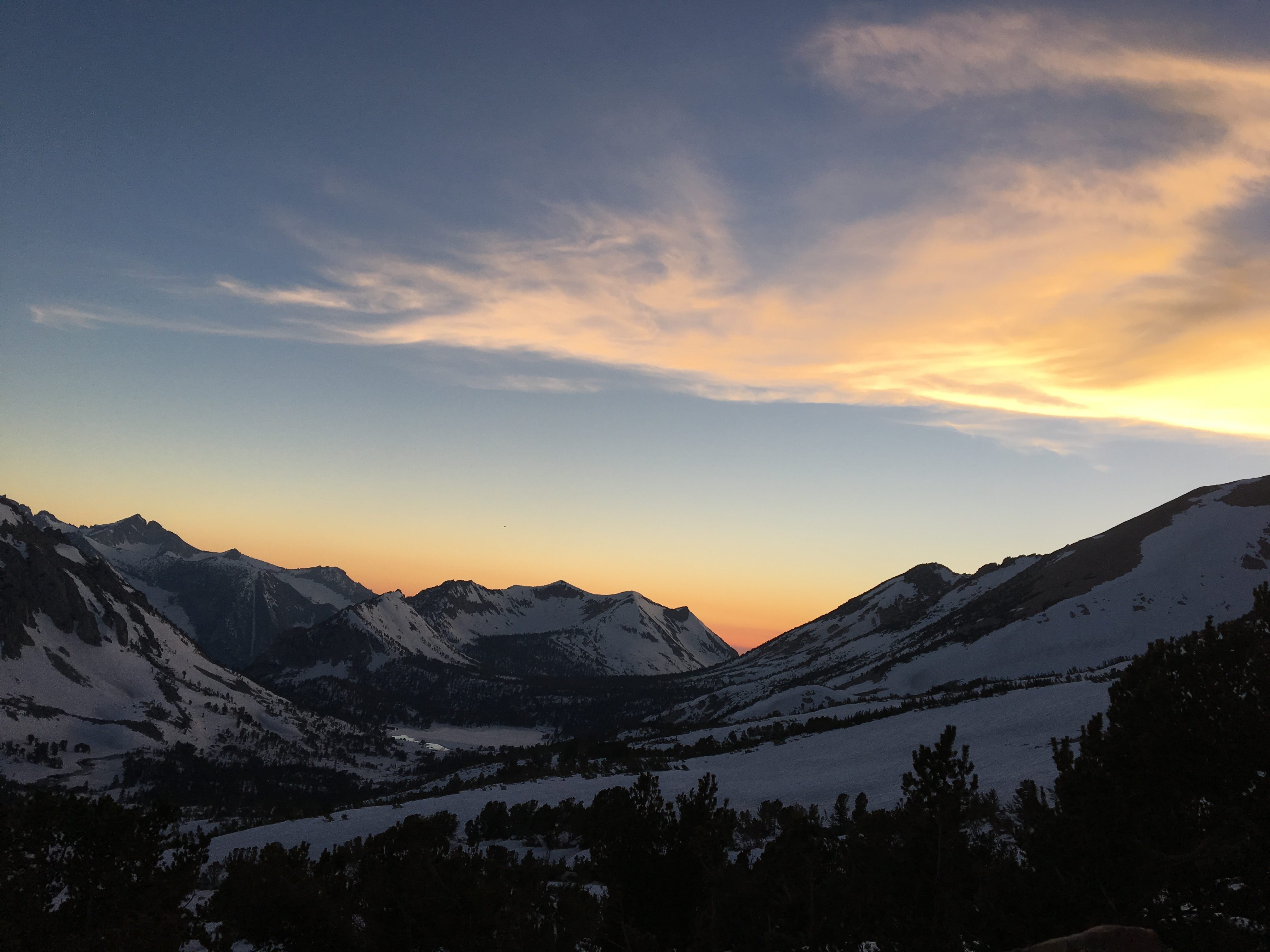 Sunset from my switchback campspot. 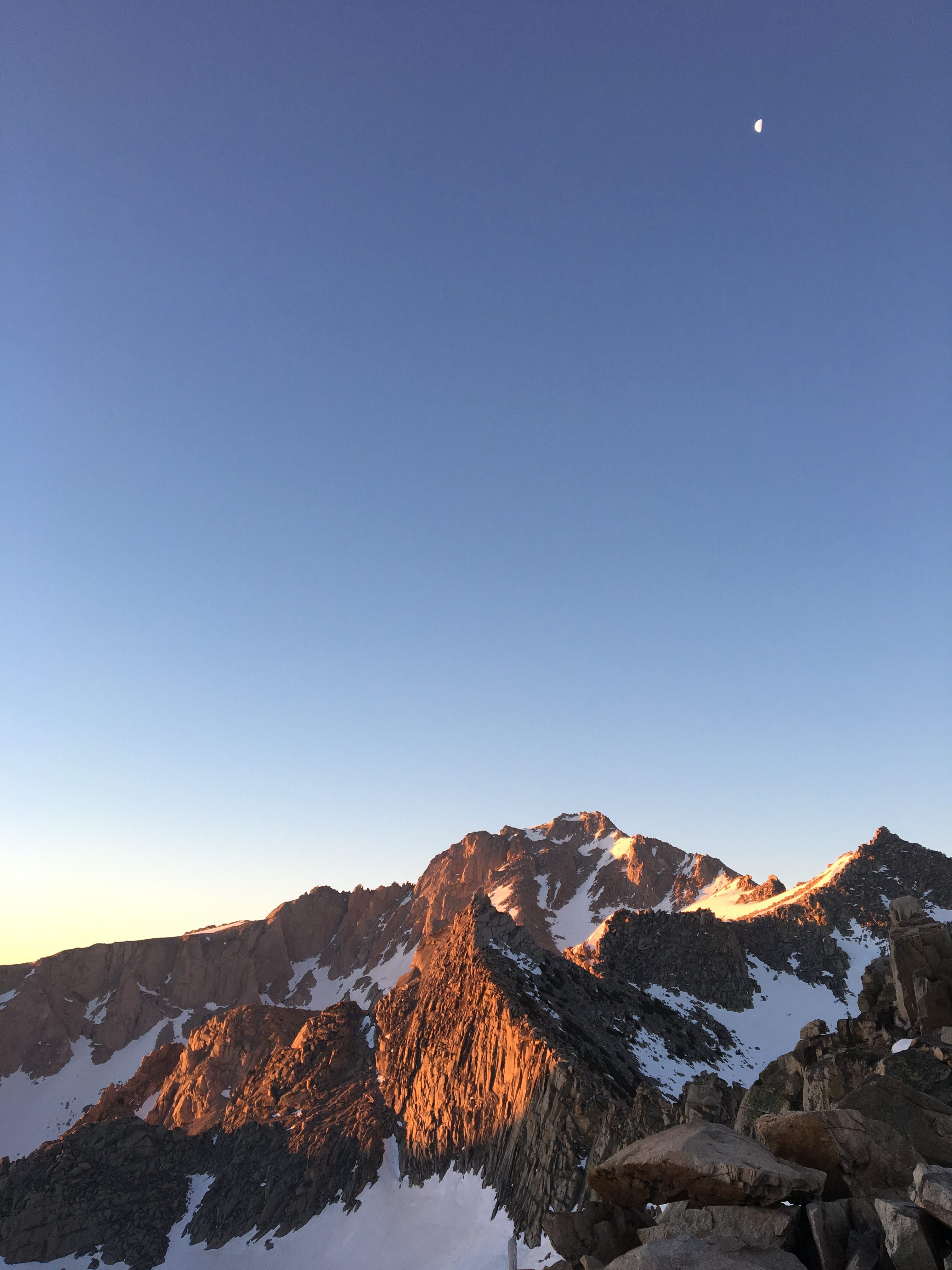 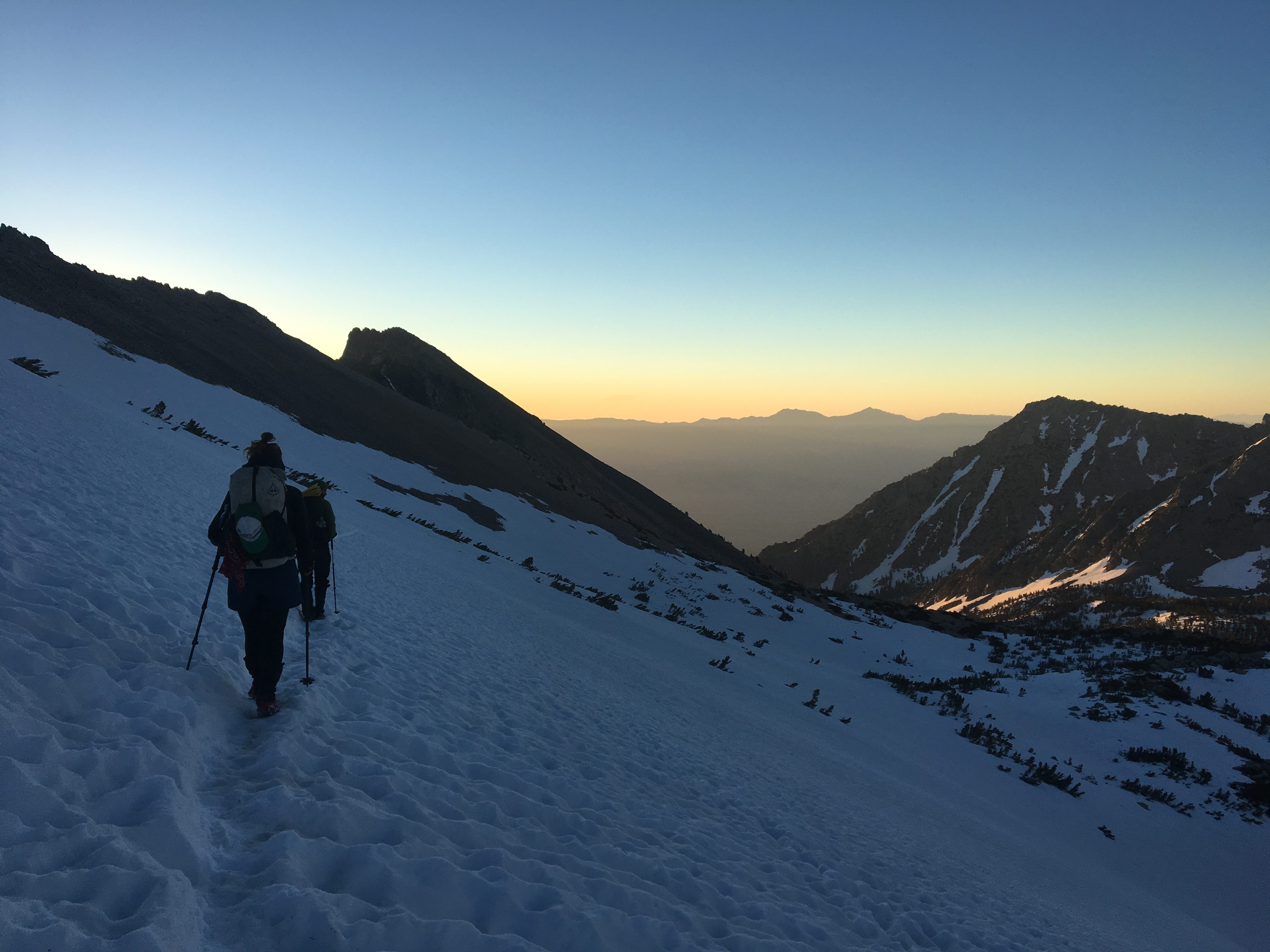 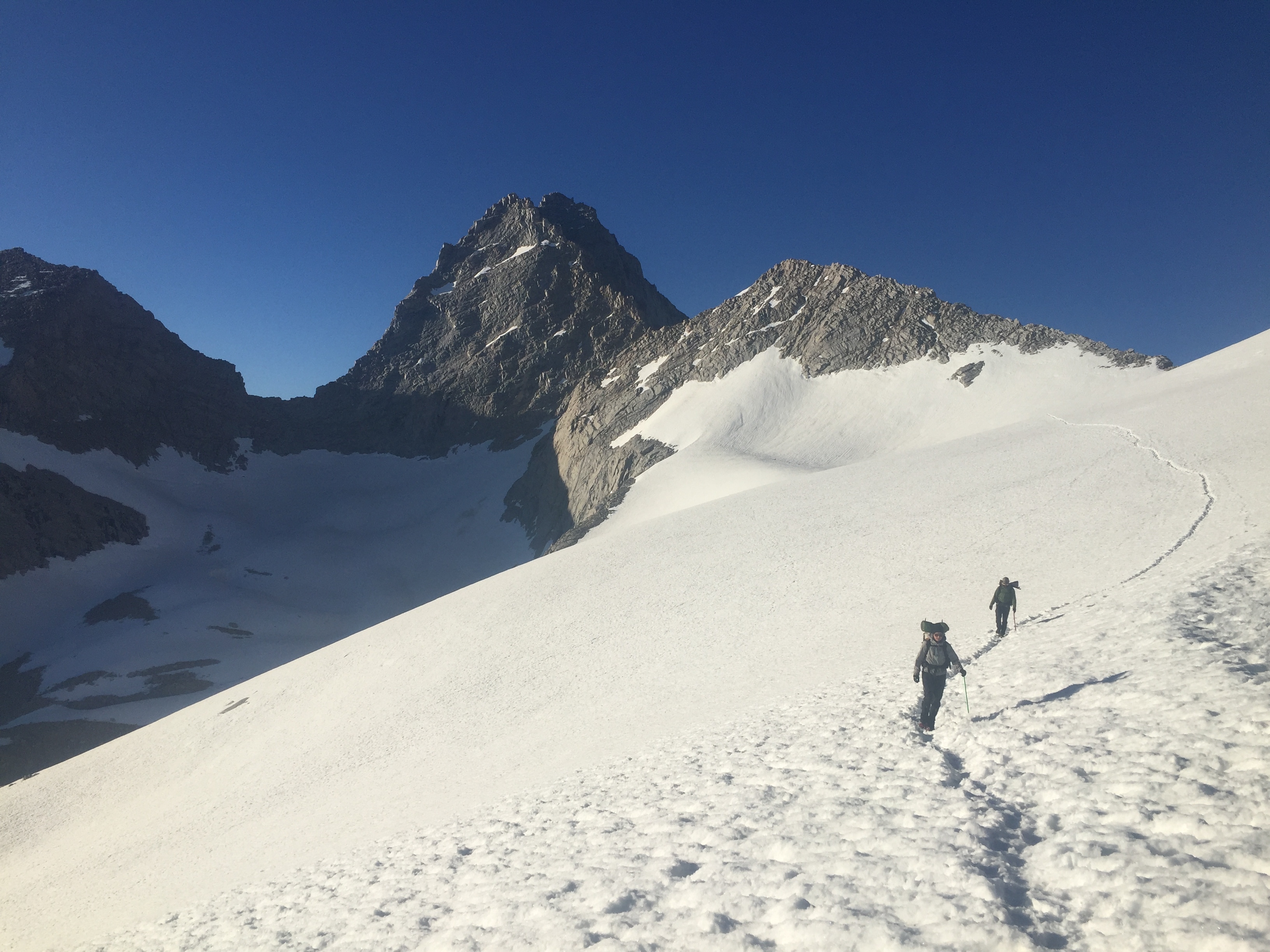 I’ve spent the last few days in Bishop at The Hostel California (a fantastic place) mulling over my next move. The Sierra’s were incredible, but exhausting. There is currently a heatwave in Southern California, which combined with the longer days around solstice, will lead to slushier snow earlier in the morning, and therefor fewer miles. In the interest of both time and money, I’ve decided to skip a section of the trail and head to Sierra City where I’ll keep hiking north. Again, depending on time and money, when I get to the northern terminus, I will either head back to the Sierra’s and hike the section I skipped, or call it a hike for now and come back to complete the John Muir Trail someday.

Regardless, Canada here I come!

Hi. I'm Leila. I'll be tracking my musings and progress here for my 2017 thru-hike of the PCT. I'm from Maine! (Which deserves an exclamation mark). I'm a general outdoor enthusiast, but this will be my first time spending five to six months outdoors. Luckily, I'll have my ever-knowledgeable and experienced friend, Abby, with me (a fellow trek blogger - check her out). Follow me here!