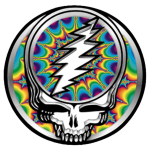 (If you haven’t already, a read of my previous blog post might be a helpful preface to this trip report.)

Because I leave for the PCT in a few short weeks, I am currently in full-fledged preparation mode. The Trans-Catalina Trail (TCT) was my shakedown hike. This post is a full trip report of my thru-hike, and I have included it in my blog because of this trail’s essential role in my PCT preparation.

Before the TCT, I had never been on a solo trip. The Trans-Catalina Trail is a 38.5-mile long trail that winds through the beautiful, Mediterranean scenery of Catalina Island. Most people I met were hiking it in four to five days; however, I did it in a manageable three. Campsites must be reserved in advance, and they cost about $28 each. There were ups and downs out there, but I left the island feeling more confident in my skills and gear for the PCT.

At 6:30 a.m. my alarm went off. Sitting up in bed at home, I felt the familiar pit in my stomach that I feel before every backcountry trip: I don’t want to do this. I can’t do this. As I pushed my comforter to the side, I tried to do the same with my anxiety. I know that these feelings dissipate once I’m out there.

At 7:20 I rolled out. When I got in the car, I realized my first mistake: my phone didn’t charge all night. It had 19 percent, and the car charger is just powerful enough to hold my phone there for the 40-minute drive. But not to fret; I came prepared with a fully-charged 10000 mAh battery ban. Wrong. That didn’t charge overnight, either. It had 16 percent left. And the cable I brought? It turns out that that was so frayed that it would only charge my phone if held in one exact position. But I won’t really need my phone, right? How long can I stretch the final 60 percent after I used up the battery bank?

At 10:15 the ferry arrived in Avalon. I disembarked and grabbed my pack from below. (Alert: They force you to check your pack in the belly of the ship. However, the boat people seemed to be quite gentle with everything, so I was not exceedingly nervous.) After grabbing a plastic spoon from the little Vons in Avalon—because my spoon was the other item I forgot to bring—I headed to the Catalina Island Conservancy office to find out how to access the trailhead. They gave me this map, which was not drawn to scale. And why make a map in that strange, hard-to-read three-dimensional style? On the one-mile road walk to the trailhead, tens of Hawaiian shirt-clad vacationers languidly driving their golf carts stared me down with prying eyes. 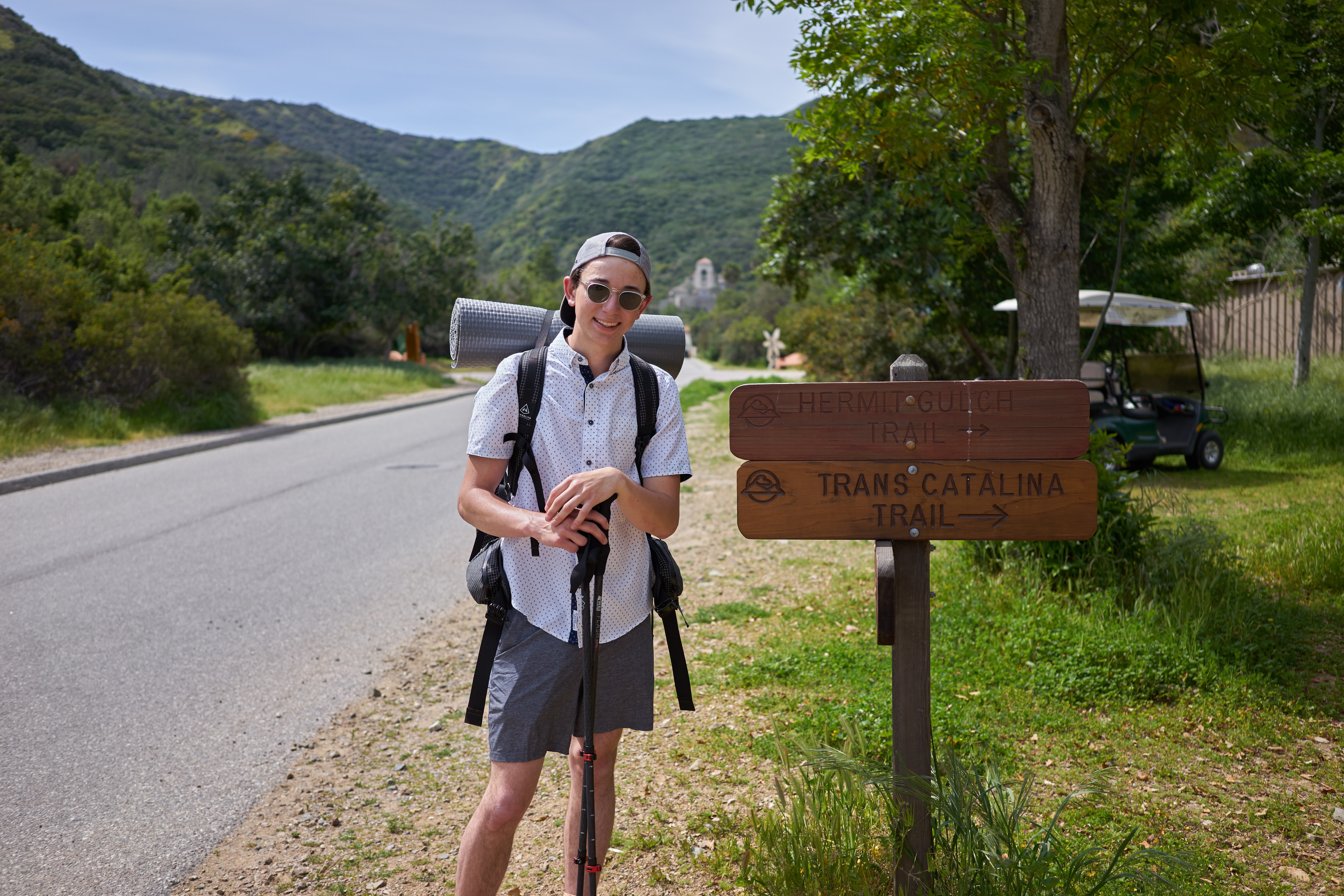 I stand at the beginning of the TCT, unaware of what was to come.

At the terminus, I took the above picture and got to hiking. The TCT starts with one huge climb, and I made the grand mistake of assuming that the first day would be easy because it was only 11 miles. As I said, that was a mistake. About halfway up the 1,500-foot climb, I began to spiral. You know when you’re freaking out or having a panic attack, and you know that it’s happening? You know that your thoughts are irrational, even though you can’t stop them? This was not that. I came to believe that I couldn’t hike the PCT because even this climb was too hard. My pack felt heavier and heavier as time went on. I became increasingly afraid that everything I had built my life towards was crumbling away into nothingness because I was too weak. There wasn’t much reason for it, but everything suddenly felt like too much.

Once at the top of the climb, I let music rescue me and hold me back from total breakdown for the rest of the day. I bounced along the trail, dancing to my tunes, while still fighting off the thoughts of utter failure. At Black Jack camp, I set up my shelter, made a disgusting cold-soaked ramen bomb, and read East of Eden. 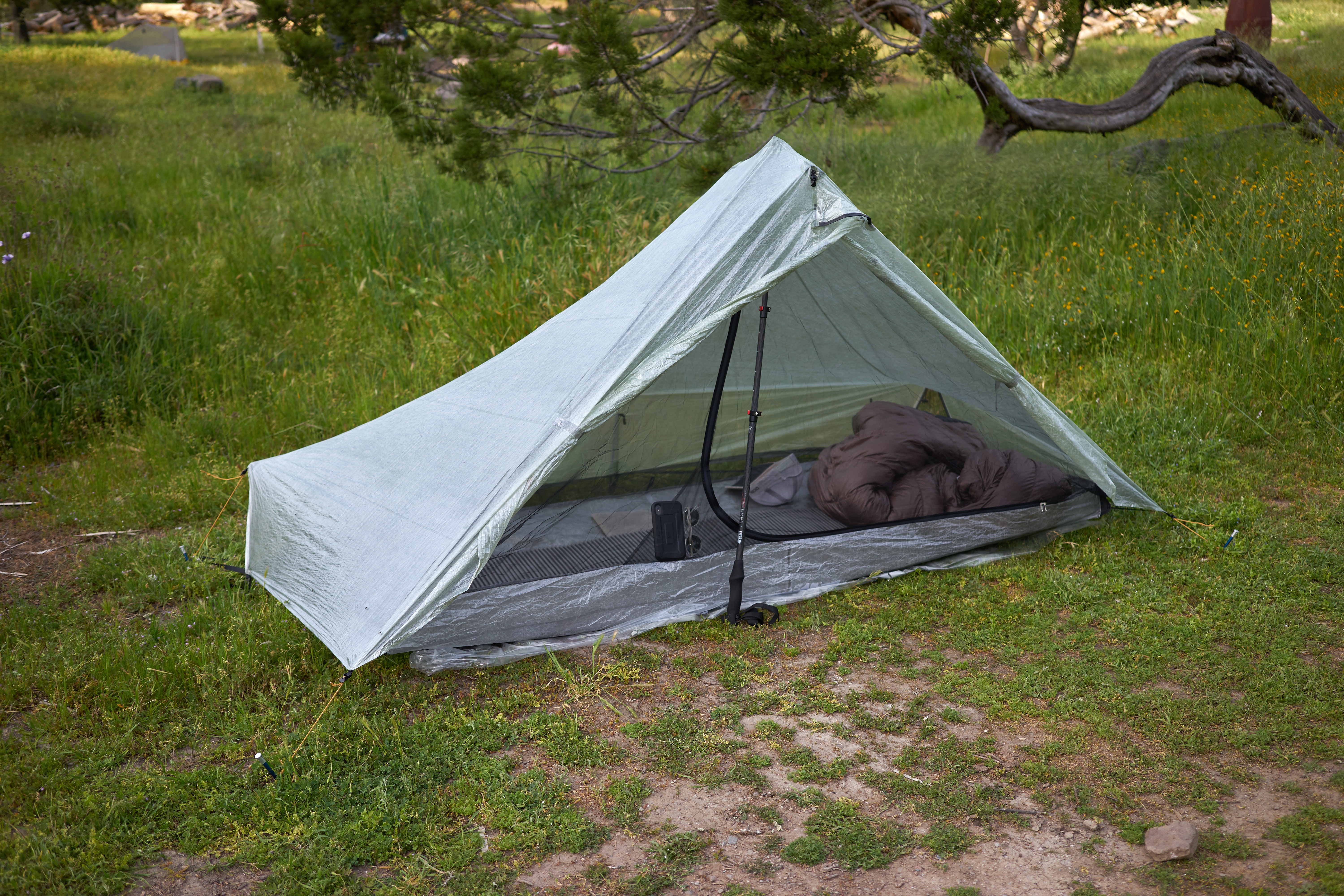 I’m testing out cold soaking for my food, and while I’m not totally convinced, the rest of my meals were pretty tasty. Around 8 p.m. I went to bed, still feeling like I was standing on the precipice of entirely quitting—and I’m not a quitter. I was awfully shaken up.

I woke up to a beautiful sunrise with fog coming off a lake. Just a few minutes after I started to walk, however, I was rudely interrupted by some bison. The bison stood right on trail and stared me down, so I just stood there until they decided to meander into the distance. 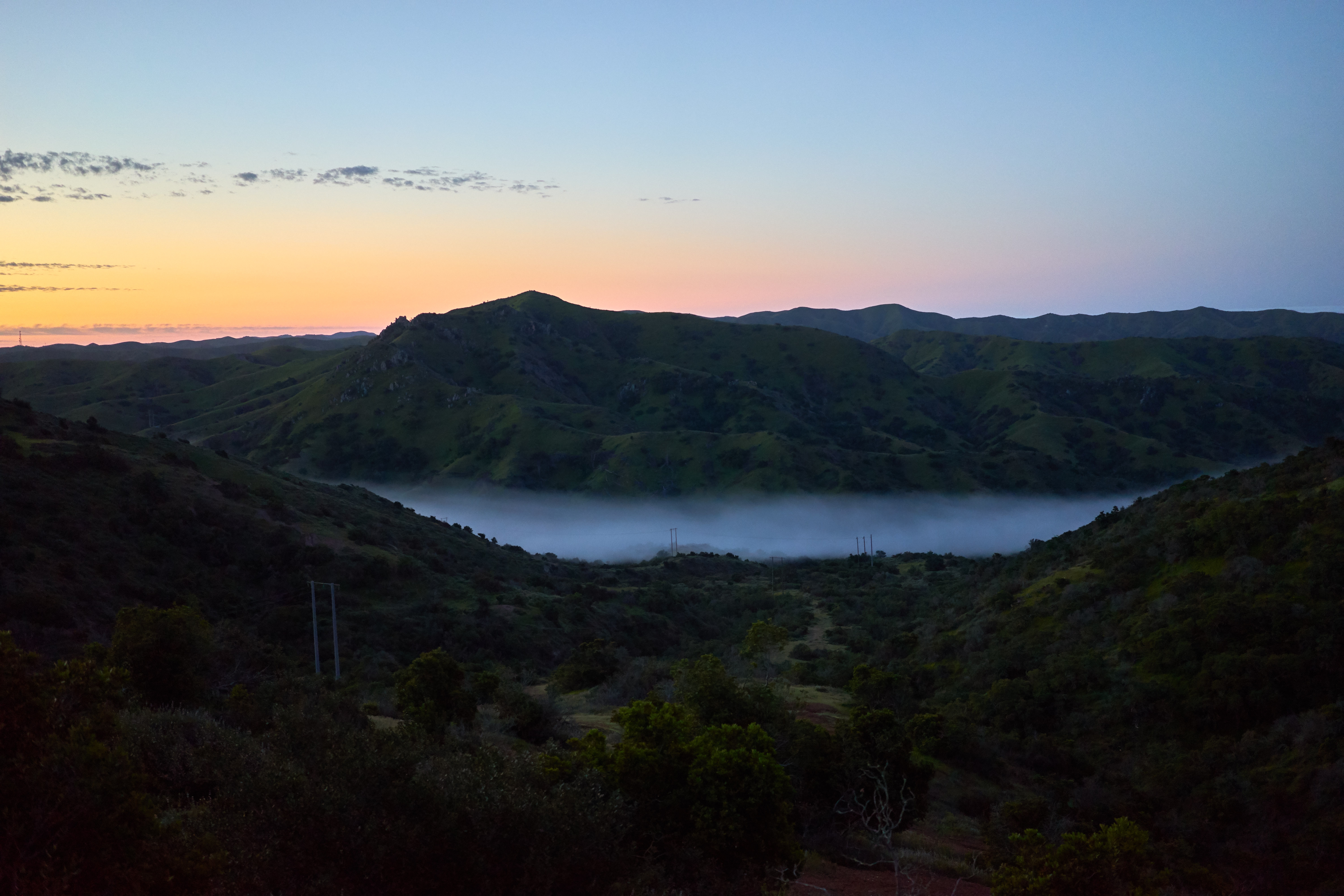 Beautiful sunrise and fog coming off a lake right outside Black Jack campsite. 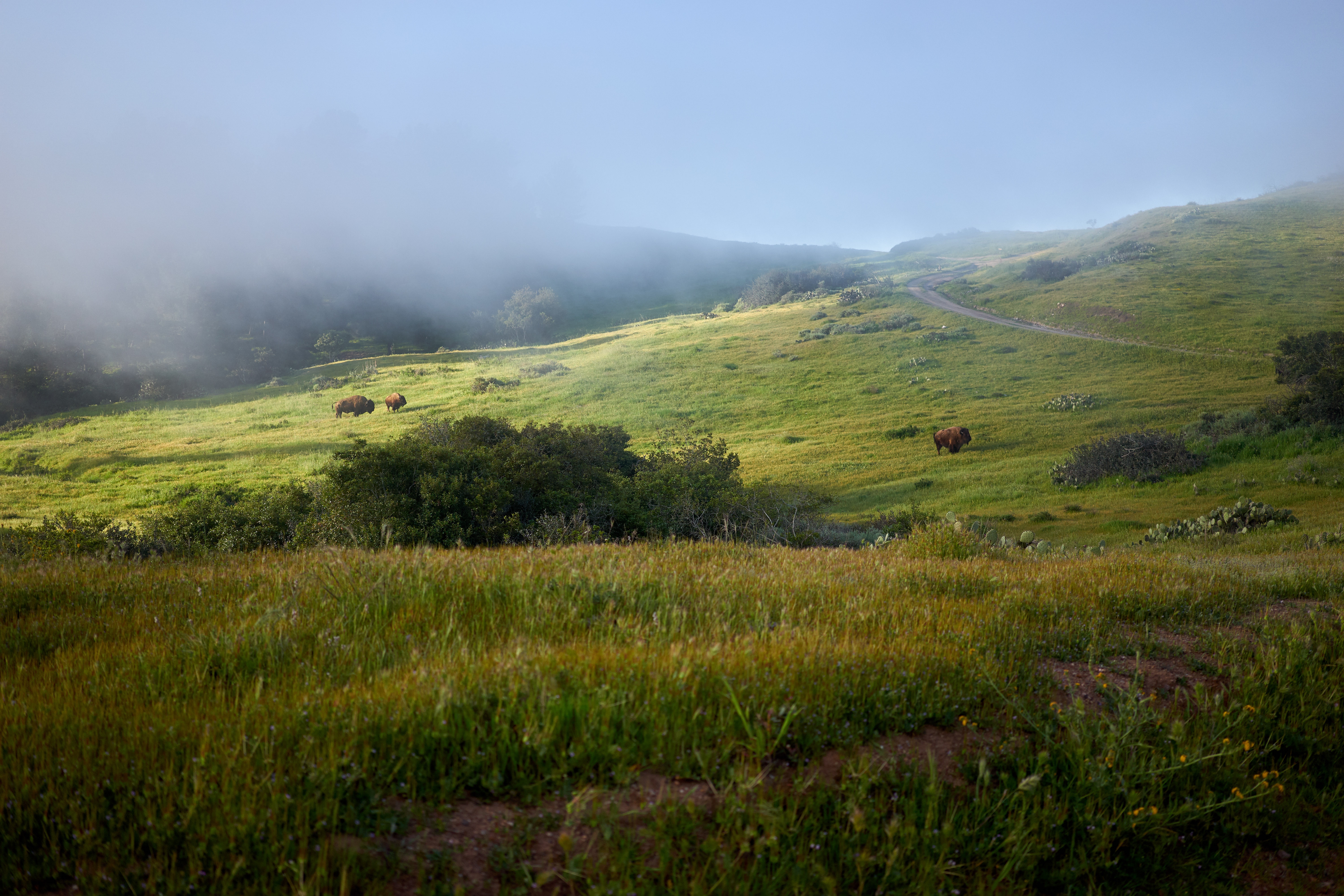 I’m usually the person who complains about excessive and lengthy switchbacks (I never cut them, however). The TCT made me eat my words. Holy crapola, some of the climbs were steep. And to add to the hurt, a good portion of the trail was half-maintained. There were tons of rocks, water channels, and other obstructions—especially the sections on dirt roads. The most difficult climb on day two, out from Little Harbor, kicked my ass. But at the top, I was rewarded with stunning views of mountains and sea. 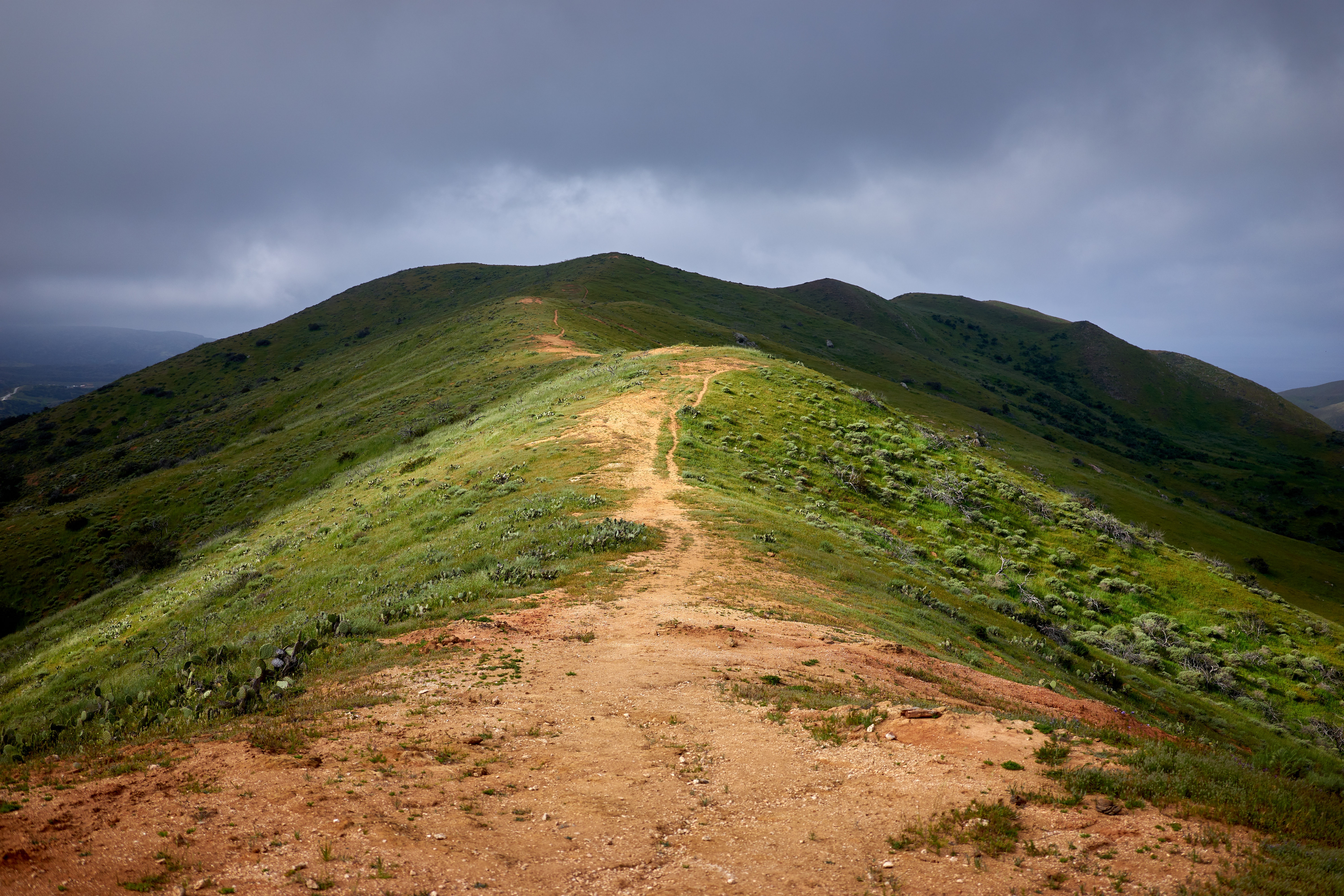 The TCT following a ridge line beneath foreboding clouds. 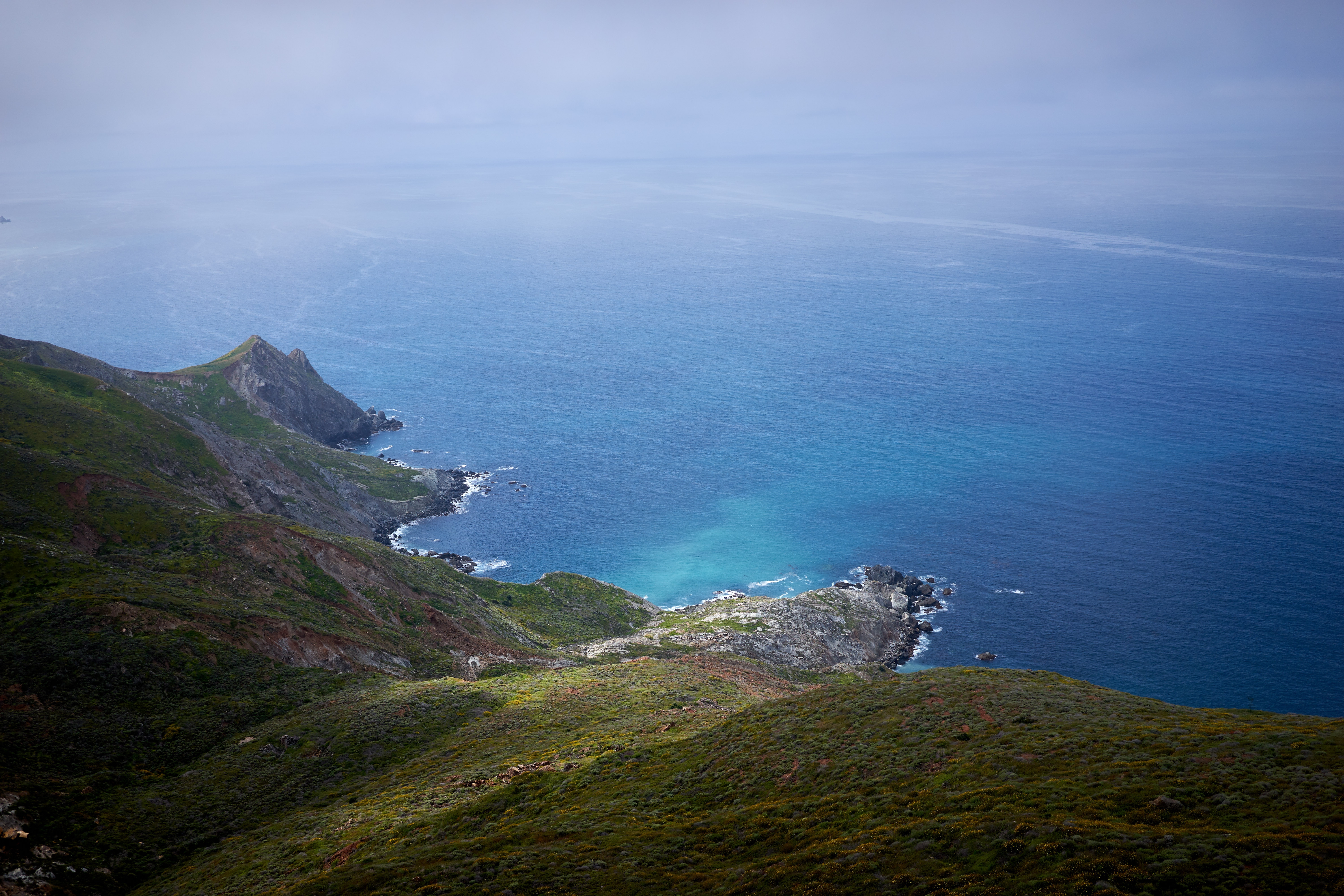 The Catalina shoreline as seen from the Trans-Catalina Trail.

When I arrived in Two Harbors, I went directly to the visitors center. They, quite kindly, agreed to plug my phone in while I went to drop my pack at camp. The campsites were about a quarter  of a mile away from the main town, and my designated spot was right by the ocean. I met a few nice folks, two of whom live in Oregon and who offered to pick me up when I hike by Asheville (shout-out to Matt and Vini).

My second day of hiking was markedly different than the first. I no longer felt like I was on the edge of a breakdown, and soon I reached that magical, meditative walking state. When night came around, I decided to cowboy camp so that I could quickly leave camp at 4 a.m. I wanted to wake up early and hike through the wee hours of the morning so that I would make the 113:0 a.m. direct ferry back to San Pedro. (I was previously scheduled on the 4:45 p.m. boat.)

The portentous clouds above did seem to signal rain, but each weather source I checked said there was a zero percent chance of precipitation. So I just decided to go for it. Mistake! The rain came about an hour after I went to bed, and I begrudgingly set up my Aeon. Once inside, however, it began to pour, and I could not have been happier than to be inside. I fell asleep to the pitter-pattering of rain on my shelter.

At 4 a.m. two things happened: my alarm went off in what felt like the middle of the night, and I remembered the Catalina Island Conservancy tells hikers to not be on trial after sundown—presumably because of the bison. The final day is a sort of loop around the smaller nub of Catalina, and I decided that I could, with relative safety, hike the first half along the coastal road. That being said, every step I took around a corner was shrouded with fear of bison, just waiting to charge me. Luckily, I was not attacked, and my questionable bravery was rewarded with a beautiful sunrise. 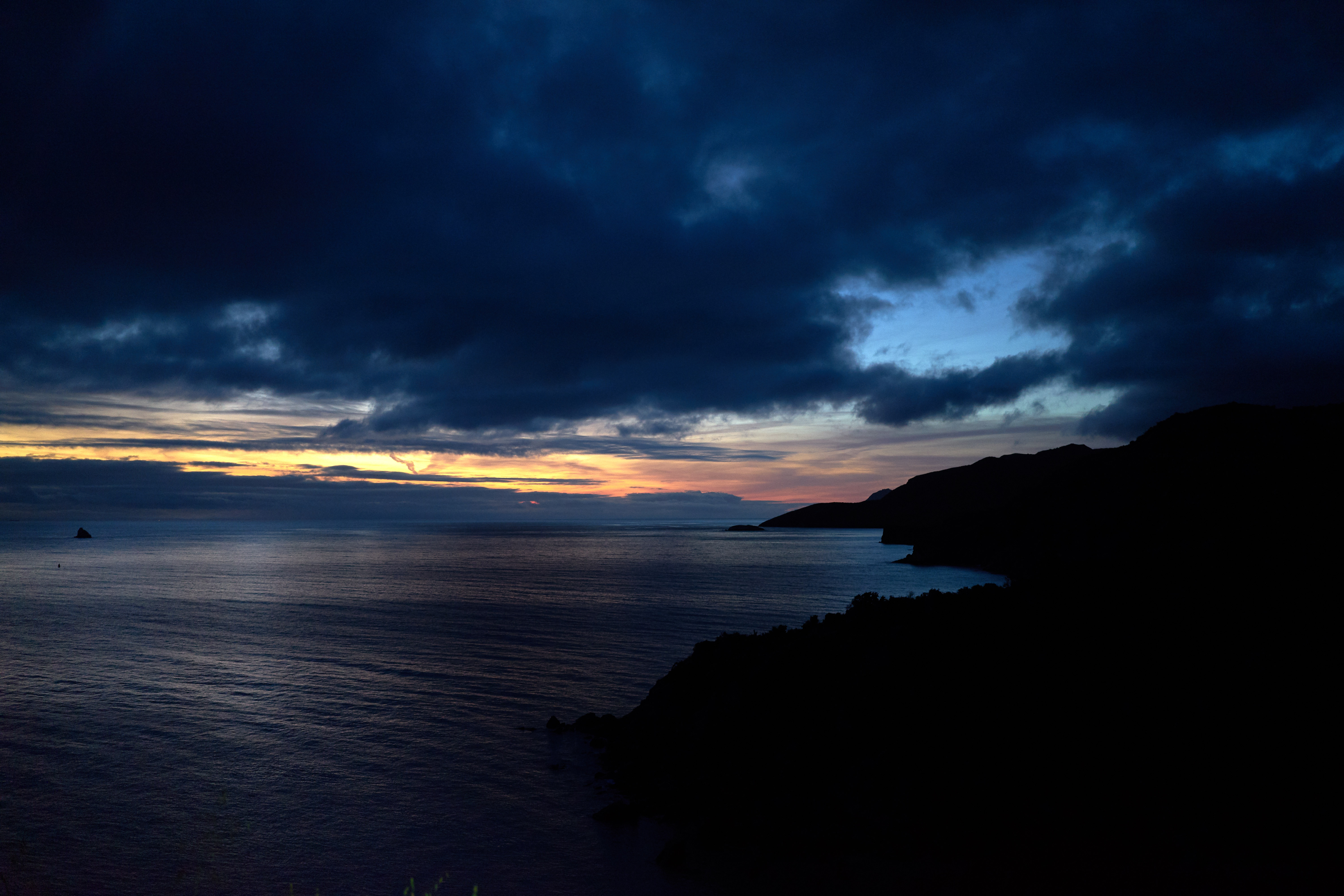 Sunrise across the Pacific Ocean on the way to Parsons Landing.

Once I got to Parsons Landing, I quickly turned back around and hiked the mountainous half of the loop. And, my goodness, was that climb aggressive. Sixteen hundred feet of elevation gain in a bit less than two miles with no switchbacks. I was sweating buckets, but a gentle island breeze and a couple of miles of ridge walking were there to greet me.

I arrived back at Two Harbors around 10:20 a.m. and was able to make it on the early ferry.

Quite honestly, I am extremely pleased with my gear list. However, I have a few comments to make.

With the struts, I must store the Aeon vertically in my pack, and I’m not willing to remove them every day. So I’m living with it, and the vertical storage has not proved to be too much of an issue.

I should have bought the 2400. The 3400 is just too large, and I ended up rolling the entire collar down, even when the pack was fully loaded. I think that with six to eight days of food and water on the PCT the 2400 would still work. Additionally, I got a bit of rubbing against my hips, but I think that’s natural and something against which I will grow calluses.

It is just as comfortable as my ZLite, which was awesome. I have no complaints, except that I wish there were a way for me to carry it without strapping it to my pack. I feel like such a gumby. What can you do 🤷‍♂️.

Overall, I had a fantastic time on the TCT. The only problem is that I am now, more than ever, unable to contain my pre-PCT excitement. My first day shook me up, no doubt, but I am glad that I had that experience and was able to keep moving. Furthermore, I am sure that I will experience such lows on the PCT, and now I know that I can fight through them. What’s the good worth without some bad, anyway?

P.S. Feel free to check out the rest of my images here.

Hello! My name is Sam, but on trail, they call me Prom King. I hiked 600 miles of the PCT in 2019 before getting injured and coming off trail. After healing, I went and thru-hiked the Colorado Trail later that summer. I love the outdoors, feel indifferent about walking, and hate the rain (when on trail). That being said, I'll probably get talked into hiking the AT...