It was entirely surreal that we were actually beginning our hike the morning we drove up to the monument. Like many NOBOs, we stayed at Scout and Frodo’s the night before and greatly benefited from their generosity. Thru-hiker Girl Scout gave us a ride to the Southern Terminus from Scout and Frodo’s and we enjoyed hearing about his hike and taking in some great advice as well. 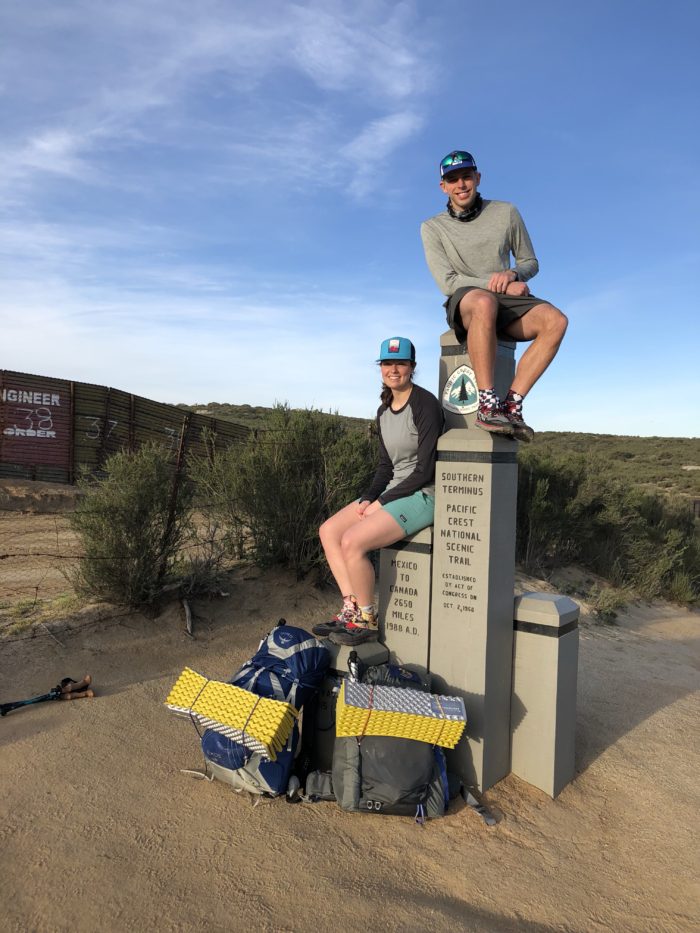 As we walked up to the monument from the car, the sun warmed us all and provided that warm glow you can only hope for each and every morning. A group photo of us all was organized and Miles and I got our obligatory prehike photos as well. Then, all of a sudden, we were ready to hit the trail.

The first 15 miles of the day were gradual and we took breaks in what little shade we could find. It was going to be a hot day, for sure. We felt in our element on trail and were nothing but excited to be out there. As we made our way down to Hauser Creek, the heat really cranked up and we pulled out our umbrellas for the first time. I’m so glad that we brought these along. It really made a huge difference in the temperature. 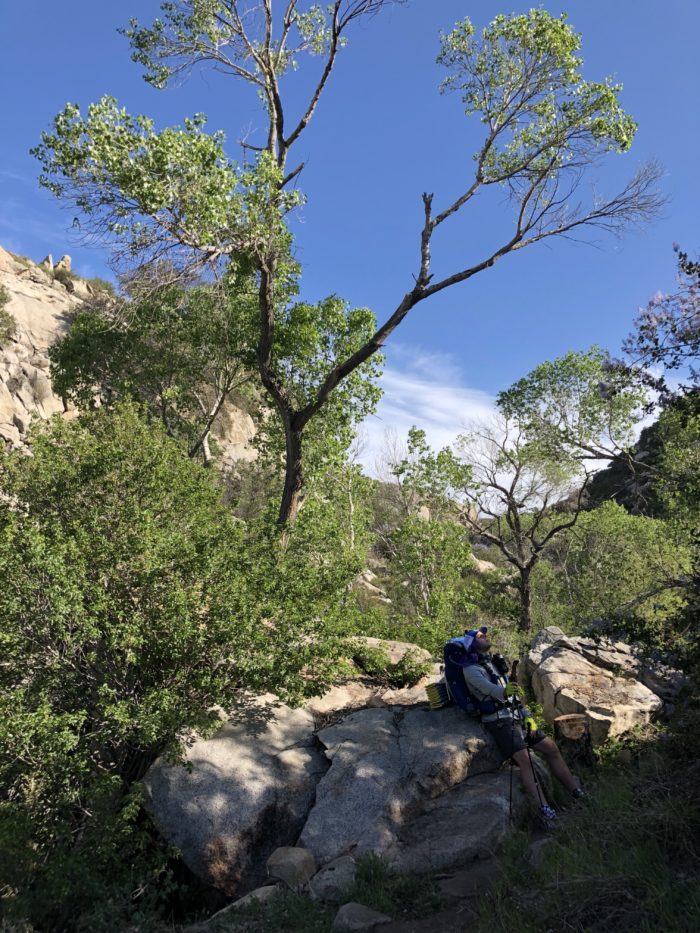 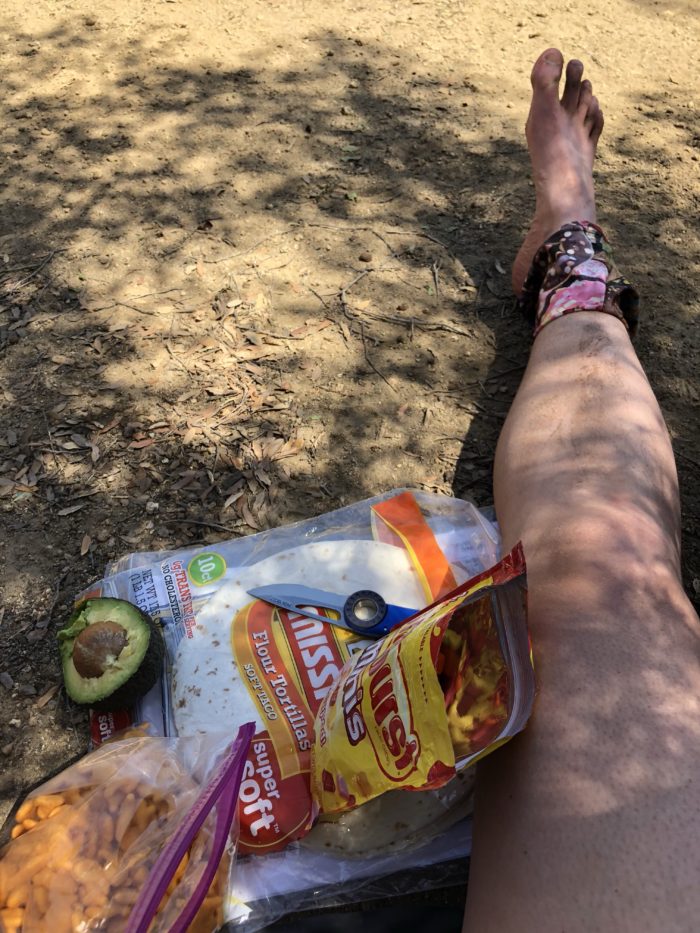 We weren’t sure how far we were going to go the first day, but it was so early in the day, we decided to push to Lake Morena. It was a hot climb out of the canyon and we took a break to soak in the breeze when it presented itself. We drank water often to combat the heat and took plenty of breaks up the climb.

Apart from the hot temperature, the landscape was incredibly beautiful. We could only imagine what it will be like later on. Once we hit about 18 miles, the feet began hurting. We were only a couple of miles from Lake Morena, so we kept on and arrived midafternoon. The worst part of the day was walking on the pavement of the campground. 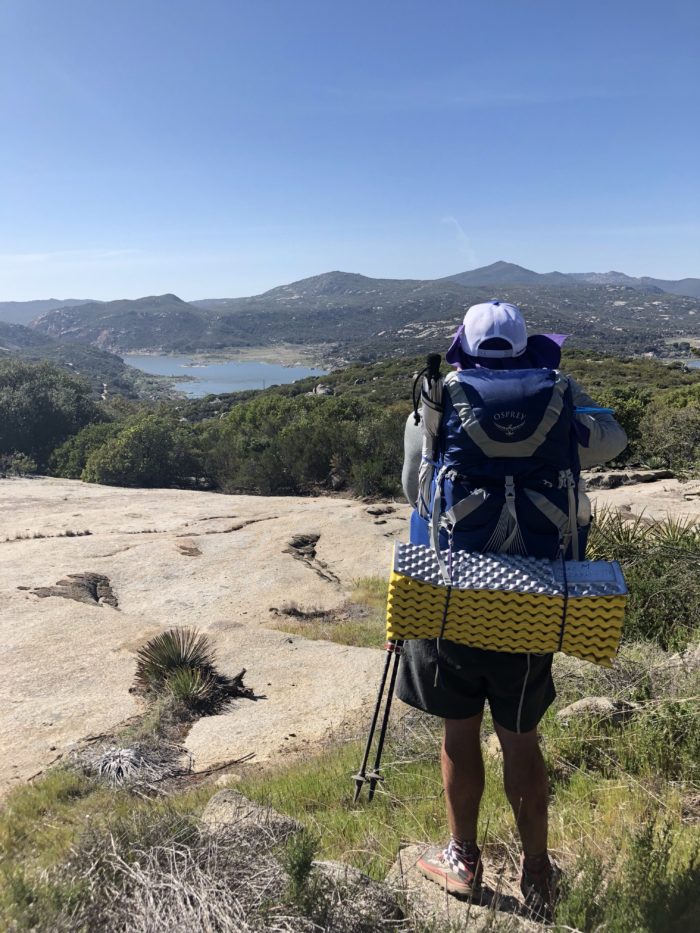 There were several hikers already at the campground, but we were hungry more than anything, so we set up camp and hobbled down the road to the malt shop for cheeseburgers and chocolate milk.

On day two, we again hobbled out of our tent and got on trail by 7 a.m. We were really enjoying the surrounding scenery as it’s nothing at all like our home state of Maine. We took a break at Boulder Oaks before beginning the climb up to Mt. Laguna. The wind picked up today, but it was a nice respite from the heat of the day before. 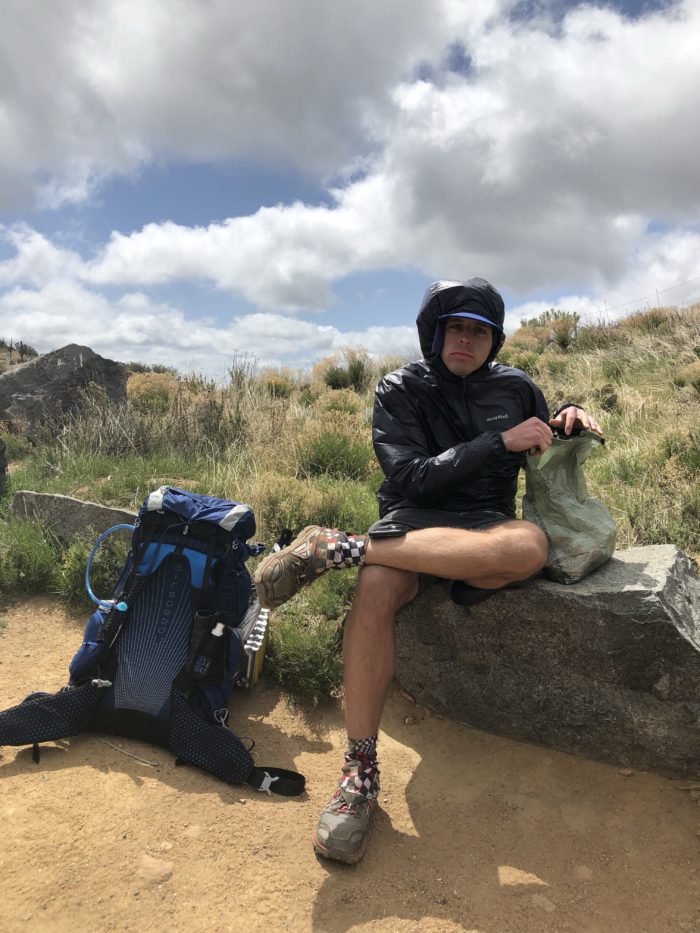 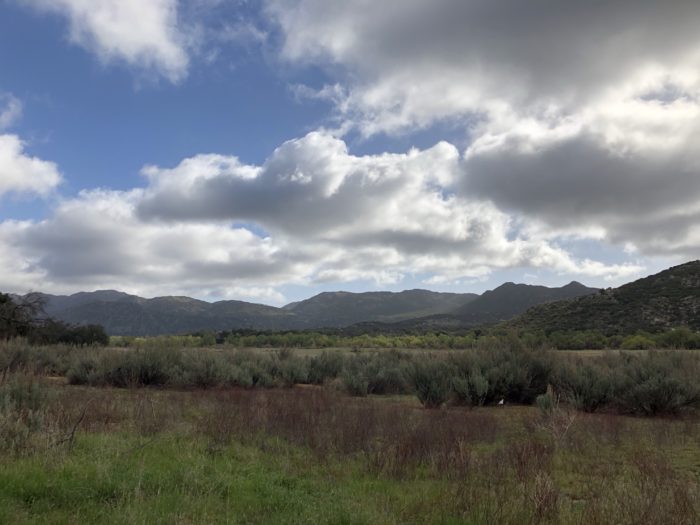 During our lunch break, we met another hiker from the Netherlands who had “Miles to Go” tattooed on her wrist. It was pretty cool since that’s Miles’s trail name.

We were both sore from our 20 yesterday and even though it was still early, decided to camp a few miles outside of Mt. Laguna. It was super windy when we got there, but thankfully the wind died down once the sun set.

Day three brought us into Mt. Laguna for our first resupply. After ten hours of sleep, we felt better but still some soreness. My calves were very tight, so I’ve been trying to do daily stretching to help with that. We resupplied enough to get us to Julian and filled up on water at the visitors center.

We had our first real desert vista in the morning and got a close glimpse of the San Diego State University observatory. Again, what we are seeing every day on the trail is incredible.

We found a camping spot among the boulders overlooking the desert. Windy, but we just couldn’t pass up the view. We camped next to Dreamer and Cornell, two women we had been leap-frogging with that day. We all enjoyed the sunset on top of the boulders and I’m pretty sure only photos can do it any justice here.

Day four gave us a beautiful sunrise before we headed north again toward the water source a few miles away. We had lots of downhill hiking that physically challenged both Miles and me. The long descent into Scissors Crossing gave Miles a shin splint and really made the insides of my feet hurt. It was hot, too, with little shade along the way. 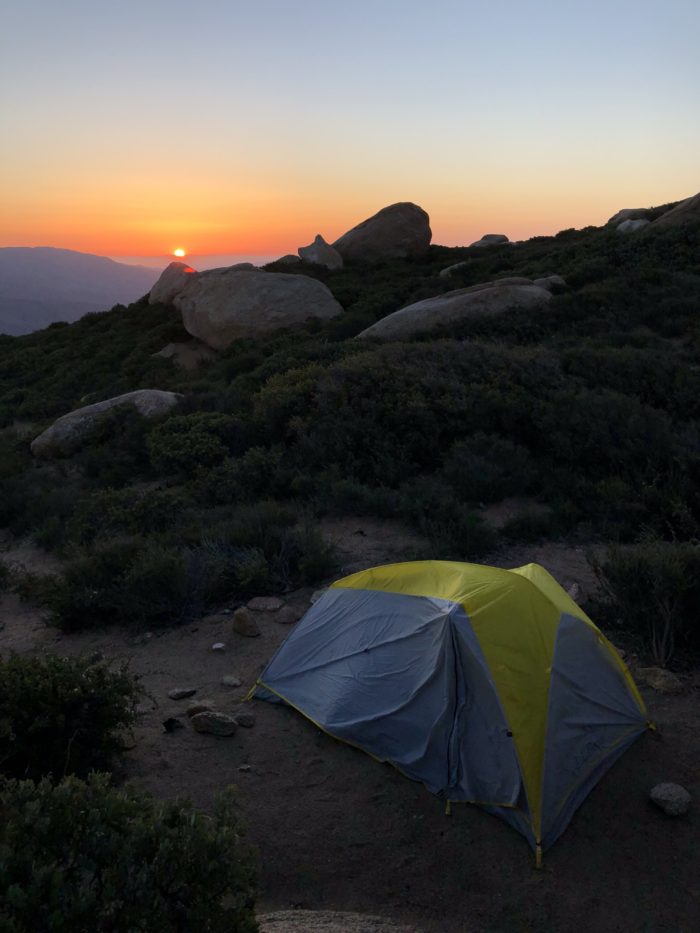 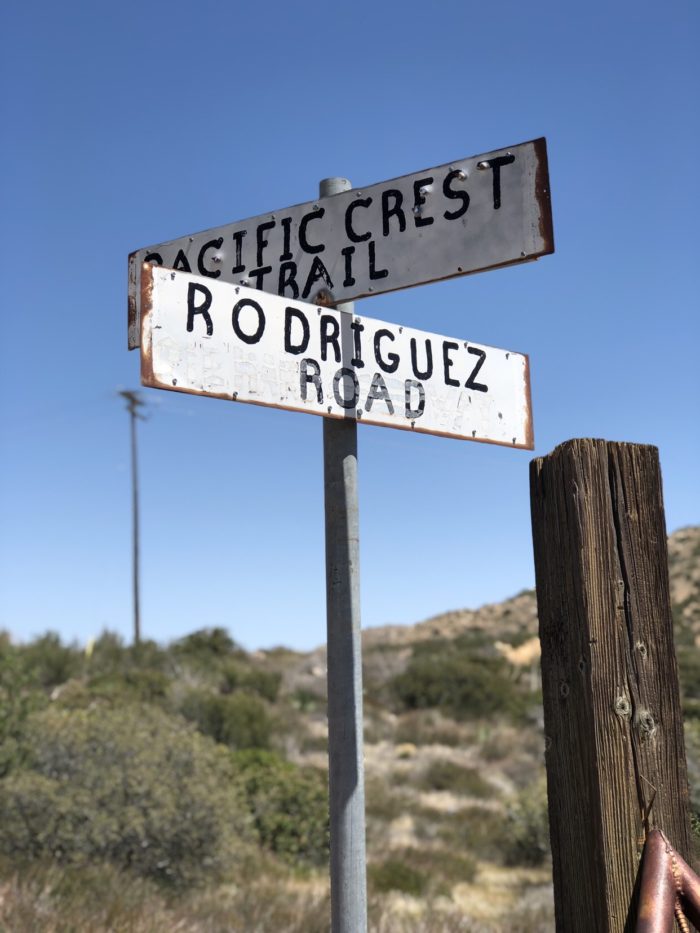 We planned to camp a mile outside of Julian, but it was damn hot still and knowing that we could go into town instead, we pushed through another mile. We were hurting, but the lure of town was too great.

Somehow, we got lucky enough to get picked up by the second car that passed. Scott gave us a ride and is taking a couple of weeks off from his own thru-hike to rest his knees. He was heading into Julian and figured he might be able to give some hikers a ride. Thank you, Scott. 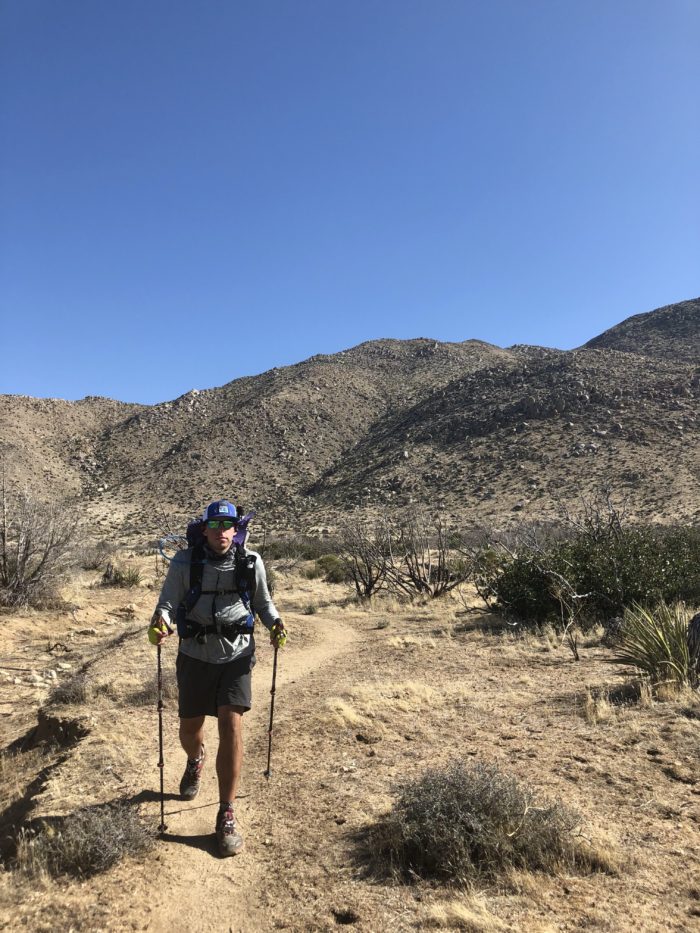 We got a burger and beer at Carmen’s and slept on the porch among 20 or so other hikers there that night. It was a full house, but somehow I heard zero snoring and slept really well.

Day five started off with a slice of Moms apple pie and vanilla ice cream. This pie shop in Julian offers free pie, ice cream, and a drink to thru-hikers who show their permits at the counter. Warm pie and cold ice cream was just about the perfect way to start off our day. 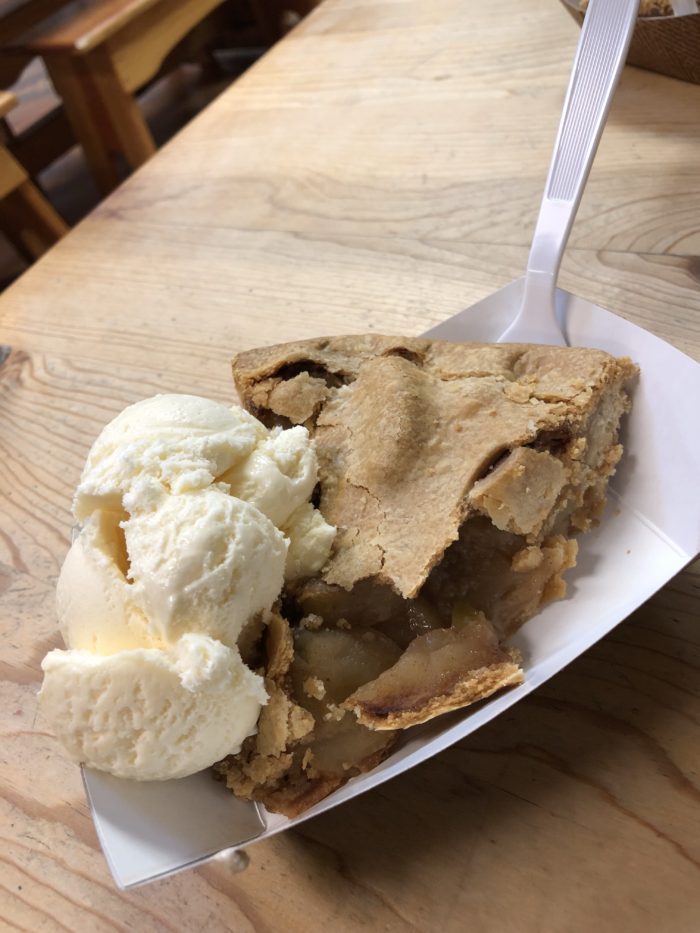 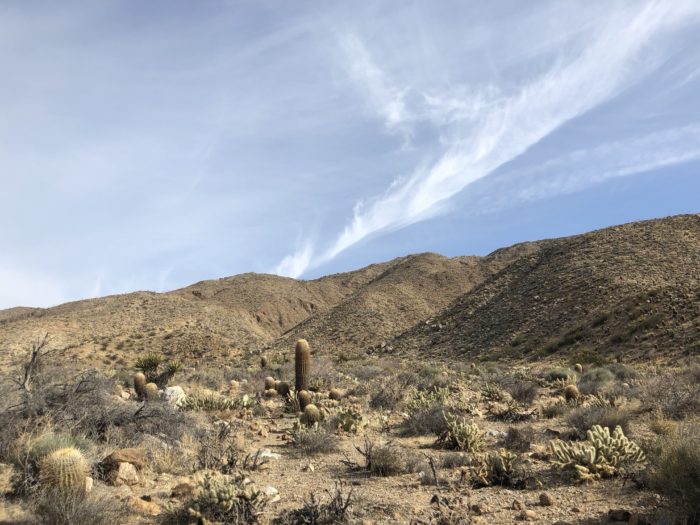 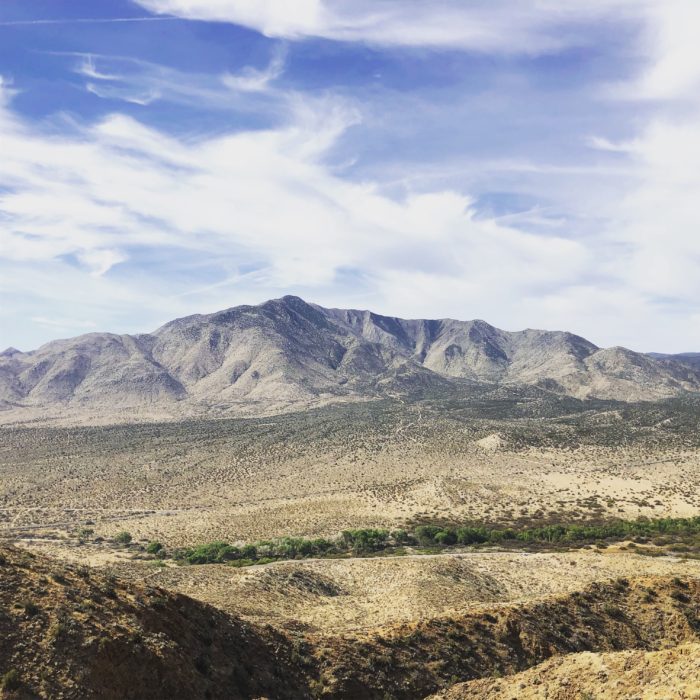 Again, we got extremely lucky getting out of Julian. It’s a 12-mile hitch back to the trail, so when a couple pulled up to us before we could even put out a thumb, we were pumped when they asked if they could give us a ride. It was her birthday and she told her husband that she wanted to do a good deed and we happened to be that good deed.

We climbed and climbed that day out of Scissors Crossing, but we were so glad that we began earlier in the day to avoid the worst of the heat. I felt great until after we began hiking again after a morning break. The insides of both my ankles were really hurting and my right big toenail felt kind of off. When I was finally able to take a look at it, the nail was throbbing and I found that a blister had formed underneath it. Cool. 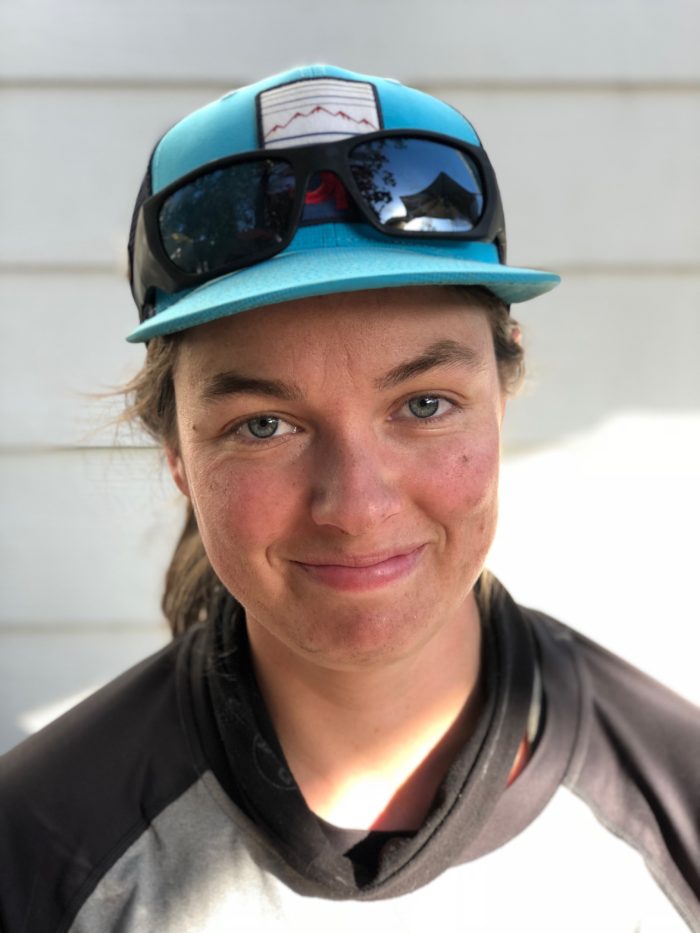 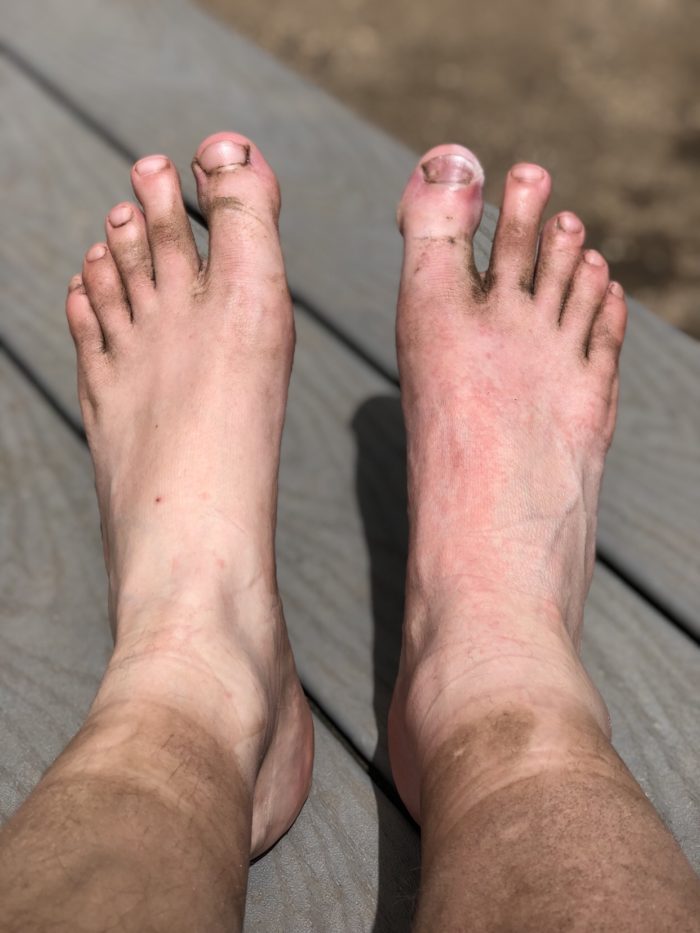 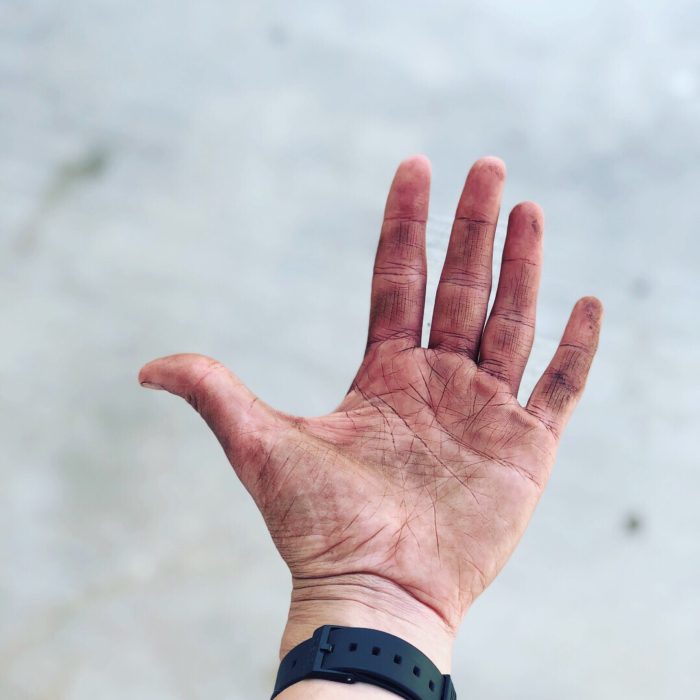 We took an extended break at the Third Gate water cache and decided to push a couple more miles to make our day into Warner Springs a bit shorter. I’m glad we did because the camping spot was awesome, overlooking desert and surrounding mountains.

On day six we hiked another amazing stretch of trail right into Warner Springs. It was windy, but we hiked through vast, open meadows and made a pit stop at Eagle Rock, where we met two women on horseback doing a section of trail together from town. 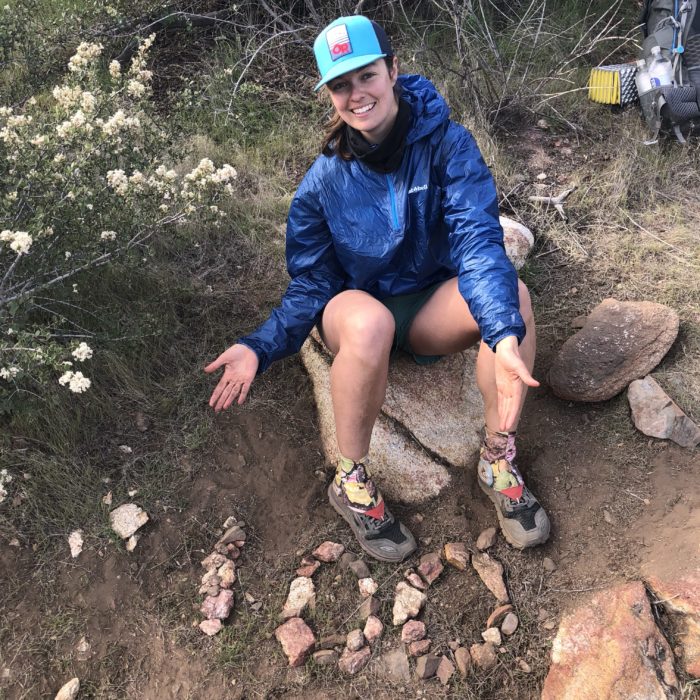 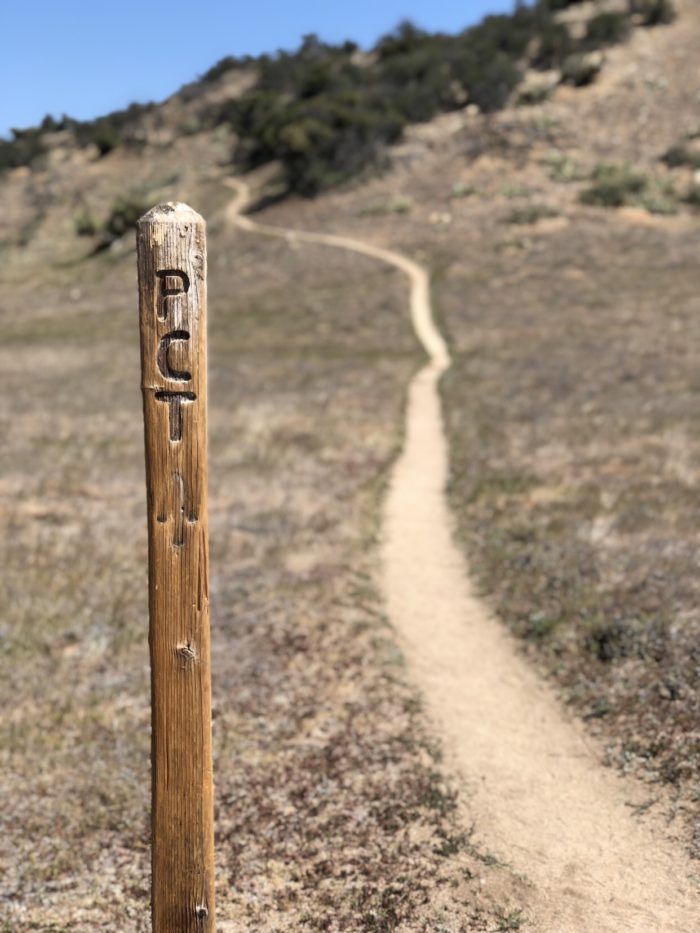 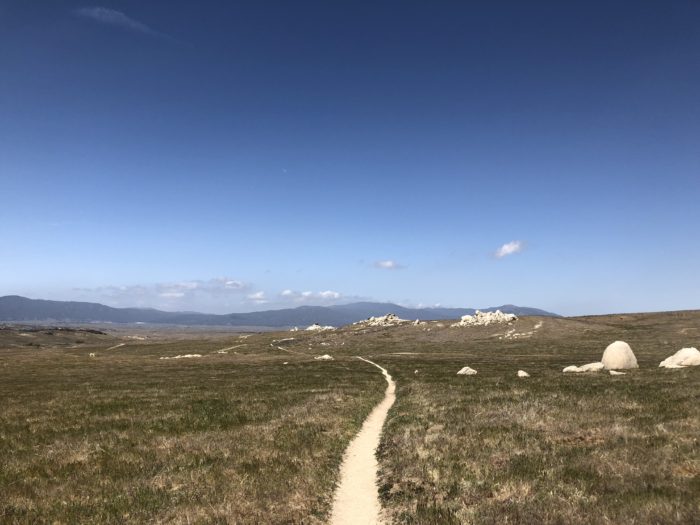 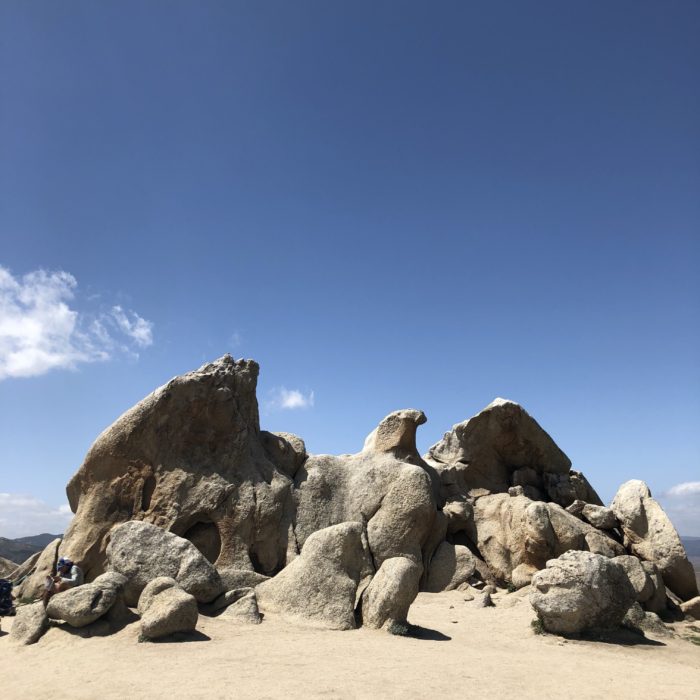 More than anything, though, we were looking forward to getting into Warner Springs to take a zero. The insides of my feet (which I believe is a posterior tibial tendon issue) were really hurting. Miles has a bad shin splint and some IT band pain as well.

The community center here in Warner Springs is such an awesome and helpful resource for us hikers and is really in the perfect spot. We are beat up and in need of rest, food, and some new gear. It’s all here and we are soaking it all in until we need to head back out to Idyllwild.

It’s been a week out here and I have to be honest – as beautiful and exciting as this experience has been so far, it’s been tough for me in several ways.

The trail has been relatively easy to walk and so we’ve become victims of walking too far, too fast. We’ve been getting in 15 miles or so by 1 or 2 p.m. and it feels too early to stop, so we continue on and do closer to 20 miles per day instead. The descent into Scissors Crossing did a number on both of us and now we’re paying for it. We hope it’s early enough that we can reverse or at least minimize the pain with rest and a decrease in mileage. We will take it easy into Idyllwild and reassess there.

Emotionally, I have had a lot of ups and downs. I was so excited that first day and could not wait to get back out on the trail. Then, injuries began to set in and I began to really doubt whether I can physically do this thing and if I even want to. Feeling the formation of a trail community happening here in Warner Springs, along with rest, has helped a lot, but there’s still that daily struggle of feeling like this is where I want to be and then the opposite of the uncertainty of what I’m doing.

But for now, we’ll focus on getting to Idyllwild. 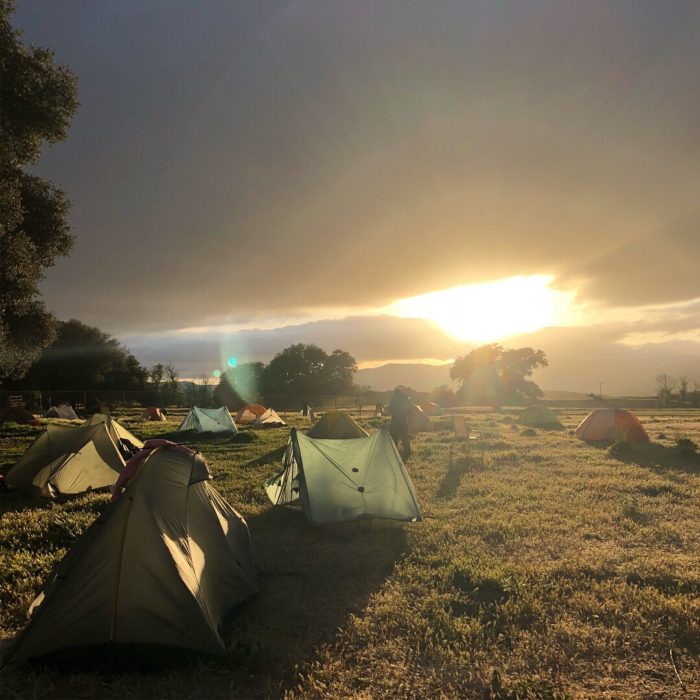