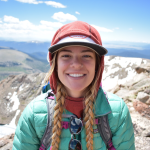 Women and the Wilderness: Why I’m Hiking the PCT

My thru-hiking journey began in 2015 when I was 18. I was a senior in high school and somehow I got the idea of hiking the John Muir Trail (JMT) into my head. I told my dad I wanted to hike this trail solo and he thought hiking it was a great idea, but being a father he was a little concerned about me doing it solo. So we talked, and then argued, and then dropped it and didn’t bring it up again…until Christmas morning of 2016 when I woke up to a JMT trail guide in my stocking, and knew that this was his way of telling me he was on board with supporting my decision to solo this trail. At the time he was one of the only men in my life to support this decision, and one of the only men to support me in every other solo trip and backcountry adventure I had previously done. He, unlike many others, believed that I, along with any other women, am capable of taking care of myself in the wilderness. He understood that I deserved the same chance as men to empower myself in the backcountry by partaking in a solo trip. So he never questioned me.

Knowing that I had the support of my dad, I called the Yosemite permit station to get more information about hiking this trail. I asked if there was anything I should be concerned about (bears, mountain lions, running out of water, etc.) and the ranger told me that none of those things should be too big of a concern, but as a solo woman my biggest concern should be other people. As a woman in today’s society I already realized this and understood that I would be putting myself at risk. This was something I was used to, and due to this I had spent many nights sleeping in the back of my car instead of setting up a tent while camping alone. I carried a knife and pepper spray when I hiked, just in case. I always jumped when I was alone in the woods or heard a stick break or a voice coming my way. I had always been worried about being alone in the wilderness, and thought this was normal, but it shouldn’t be.

I had been conditioned to be scared of other people who could hurt me or prey upon me when I’m alone. I thought this concern was “just part of being a women.” But it was not until a few months prior to my JMT hike that these fears simmered out when I read an article about the same thing I’m writing about right now and I realized that those fears shouldn’t be normal and that they were absolute bullshit.

Women in the Wilderness

According to the 2017 Halfway Anywhere PCT survey, 57 percent of thru hikers were male while 42 percent were female (the other 1 percent did not reveal a gender, were transgender, or did not identify as a male or female). Although the percent of women who are thru-hiking is incredibly higher than in years previous it leads me to wonder how many of these females are hiking solo or feel comfortable leaving their group to spend time solo. It is wonderful that the gender gap on the trail is close to being bridged, but I believe that the next step is ensuring that these women don’t think twice when considering a solo thru-hike. In order to make this happen I think that women need to drop their fears and realize that fear shouldn’t hold them back. Until more women decide to say “fuck it” and stop fostering the normality of these standards, they aren’t going to disappear.

Many people in my life told me I was crazy for dropping these fears and should seriously consider adding a partner to my trek. My response to this suggestion was the same every time: “Woman should not be called crazy for seeking empowerment through going into the backcountry alone”; “I deserve the same chance to go into the wilderness alone as men do”; and “I deserve to have the same experience as men while doing so. I deserve to have the same comfort and confidence as any man in the backcountry,”

I went into the JMT with this mind-set and the trek went swimmingly. It was life-changing, actually. I quickly learned that I felt safer alone at night in the woods than I did in the city, I had a whole trail family looking out for me, my off-trail family was supporting me along the way, and I had everything I needed to be strong, independent, and successful within myself. Every mile I hiked closer to Mount Whitney I thought about two things: “Hot damn, you are a badass” and “I don’t want this to end, maybe I should just skip Whitney and keep walking south toward Mexico?”  I think it was during these moments that I subconsciously realized I wanted to hike the PCT, but it didn’t fully dawn on me until two nights out from hiking Mount Whitney. I was camping on Bighorn Plateau, by far one of the strangest-looking places on the JMT. I woke up in the middle of the night, sat straight up, and said out loud, “I have to hike the PCT.” I still have no idea what I was dreaming about or what made me wake up but after that moment it has been all I have thought about. As soon as I got off trail two days later it was all anyone who know me would hear about and it still is. I have spent the past year and a half fixated on hiking the PCT after my college graduation. I have budgeted, saved, planned, obsessed, etc. Although there have been bumps in the road to this planning (post coming soon), I have never been so sure of one thing: this women belongs in the wilderness. Stop calling us crazy, and start calling us strong, empowered, and confident, because we belong in the backcountry just as much as men do.

See you in April, PCT.

Hi, my name is Kate. I'm 22 and currently living in Colorado. I just finished my degree and became a licensed teacher, but don’t plan on teaching for another year. I’d rather take some time off to go back to my hiker trash roots. I grew up in the Eastern Sierras and ended up hiking the JMT in 2017. I got hooked on thru-hiking and since then have been working towards a 2019, solo, NOBO attempt of the PCT.