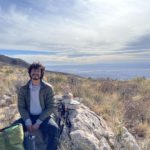 The following covers my travel to the southern terminus to Julian.

After a short flight to San Diego and a quick bus ride to the Gaslamp district I was able to find a room at Gaslamp hostel. As luck would have it there were 3 other hikers (Jeanine from Germany, Antonin, and Charlotte from Belgium) staying at the hostel and we enjoyed a dinner together discussing pre-trail jitters and excitement. The hostel Host took time to show us around downtown San Diego where we watched a beautiful sunset over the ocean. The next morning, 3 of us caught a ride to the bus depot and were on our way to Campo.

It was exhilarating to step off the bus in Campo and be back on trail. I was all smiles. It was the heat of the day and a bench in the shade was calling my name, I said “See you up trail” to my fellow bus mates and took some time on the bench to reflect. I was approached by Jamie, an English hiker, a short time after and we caught a hitch to the southern terminus. Our first taste of trail magic.

After taking our terminus photos we set foot on trail. Turkey Vultures hovering above were a welcoming sight, they are one of my favorite birds. Since we started later in the day we decided to set up camp about 6 miles down trail and get started early the next morning. A heat spike also signaled the beginning of the hike and the first 3 days reached the upper 80’s.

The hike to Lake Morena in the heat was rough and the water 14 mile water carry was an eye opener. The third day included a flowing Kitchen Creek to cool off and a long much needed siesta. Jamie and I ended the day at Long Canyon Creek. That night also marked the beginning of cowboy camping for me. As of writing this post I still have not set up my tent in the last 10 days.

The next morning we hiked in early to Mount Laguna for breakfast and to ship gear weight to Idyllwild. So thankful to lighten my pack. I was greeted by “Mike the Mouth” the next morning, a trail angel who didn’t know he was a trail angel. Mike shared his food with me while we waited for the restaurant to open and later gave me a hitch to the post office.

That evening was our first night camping in strong wind but thankfully we made it thru the night with some tucked away spots. Thankfully the following days were projected to cool down which made the hiking much more enjoyable. Long siestas are important during the heat of the day and also allowed time to meet the hikers who are passing thru as well.

The walk into Scissors Crossing was rewarding with colorful desert plants and thankfully Julian was up ahead. We caught a ride with a shuttle driver into town fairly quickly and before we knew it we were in town inhaling a burger and making our way to Moms Pie. Julian is a designated historic area so it maintains much of its character from the Gold Rush era. Resupply was quick and it was time to head for a nights stay in a tiny house.

I’ve been working on organizing my pack differently to see how quickly camp can be packed up. I’m an early riser around 4:30 a.m. and have a stretch routine. But most importantly, morning oats.

Finding a good place to eat morning oats after packing up camp has become a science. Is the spot within a few miles? Is it shielded from the wind? Is there a view of the sunrise? Most often a spot reveals itself and it’s time to eat.

Howdy! Isaias here. Avid hiker around Central Texas and the Southwest. Thru-Hiked the Appalachian Trail in 2021 (March 15 - September 8) with my Dad. Attempting a solo thru-hike of the PCT in 2022 - one step at a time.