A Scientific Explanation of Hiker Trash (in 25 Images)

New studies have taken aim at uncovering one of America’s most unknown and exotic subcultures, commonly referred to as “Hiker Trash”. With the wave of long distance hiking themed Hollywood blockbusters, teams of sociologists and scientists have banned together to collect data on this rare breed. Few studies have been conducted on the habits and rituals of Hiker Trash, but we have been keeping a watchful eye.

In this post, we have compiled several images which depict the many key attributes of this bizarre collection of creatures known as Hiker Trash. 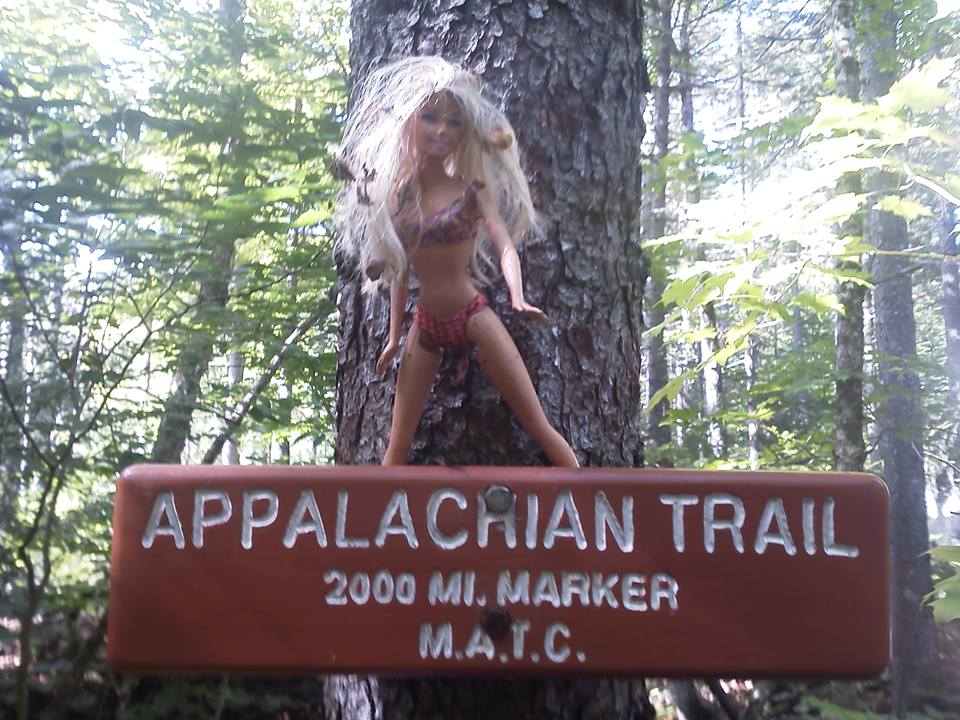 One activity common amongst Hiker Trash is the act of indiscriminately lying around, otherwise known as competitive loitering. Scientists have yet to find the preferred location in which this aggressive inactivity takes place, but one can only assume that the occasional slothfulness is a result of the extreme physical demands of their daily lives. 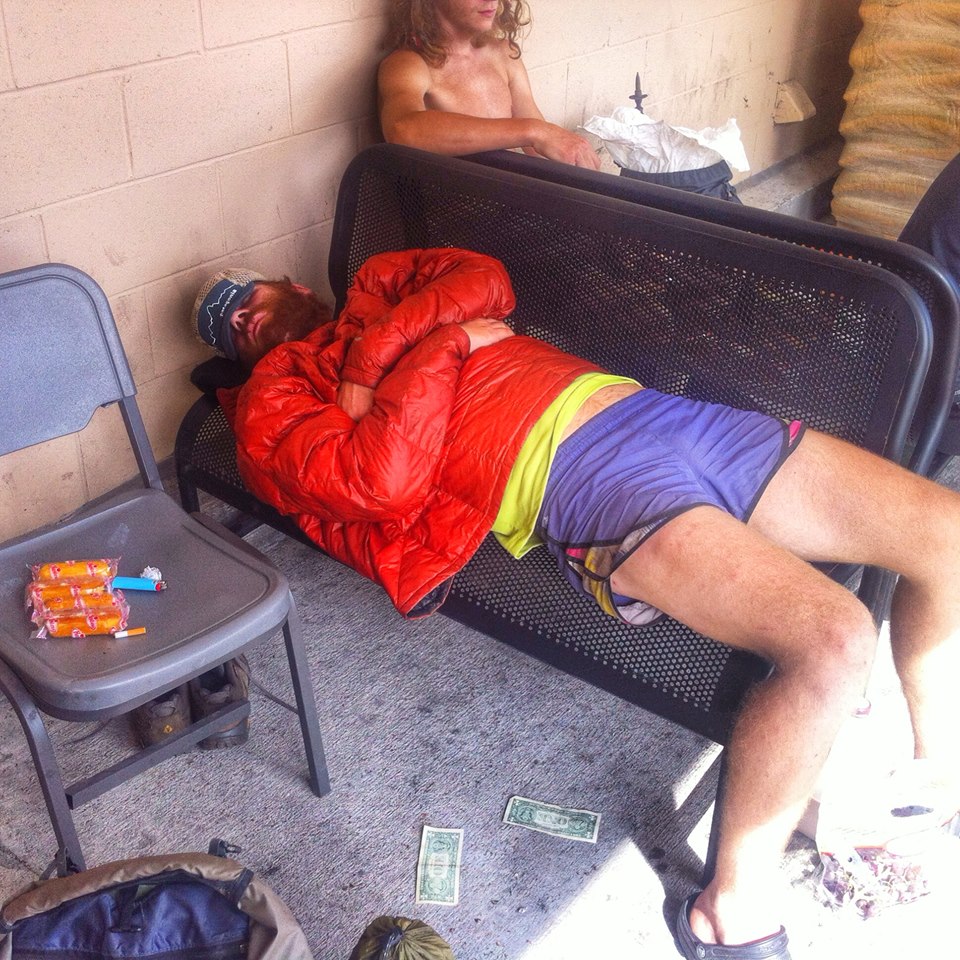 Note the startling short shorts, abandoned dollar bills and partially smoked cigarette. It has yet to be determined what the significance of these items mean. 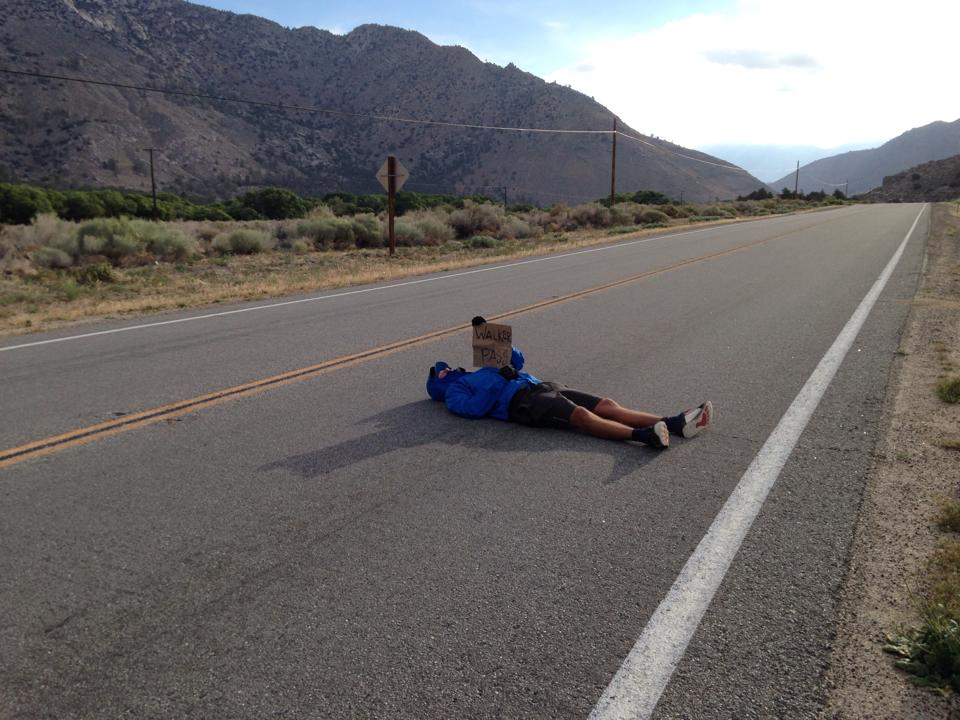 Here you see a piece of Hiker Trash lazily attempting to get a ride from a passing motorist by lying in the road. 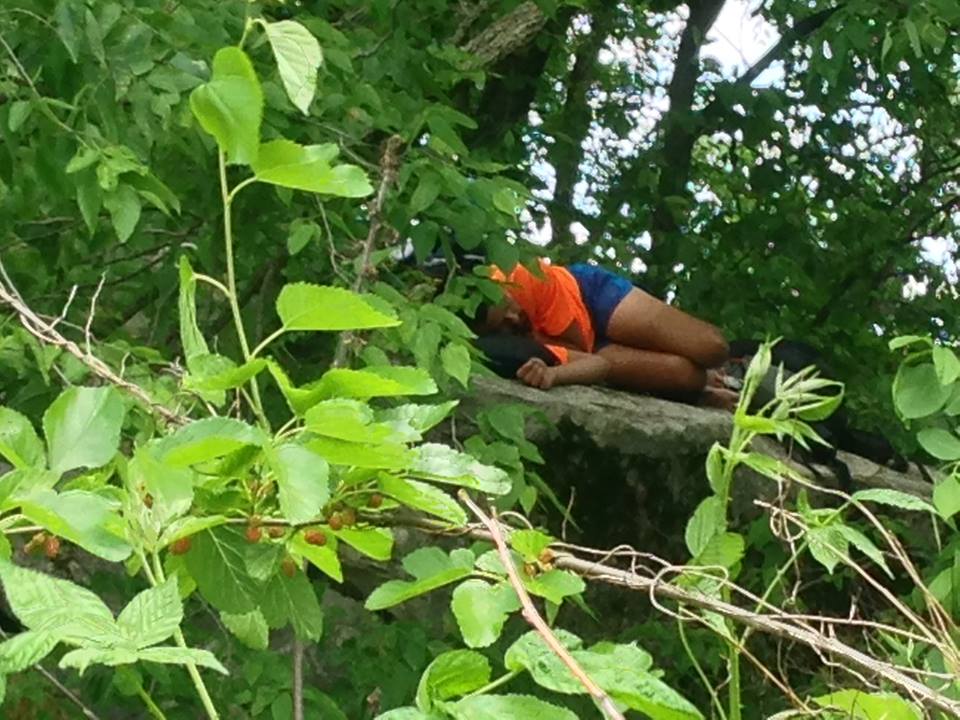 An inconspicuous spot has been chosen by this piece of Hiker Trash  for a quiet lie down. 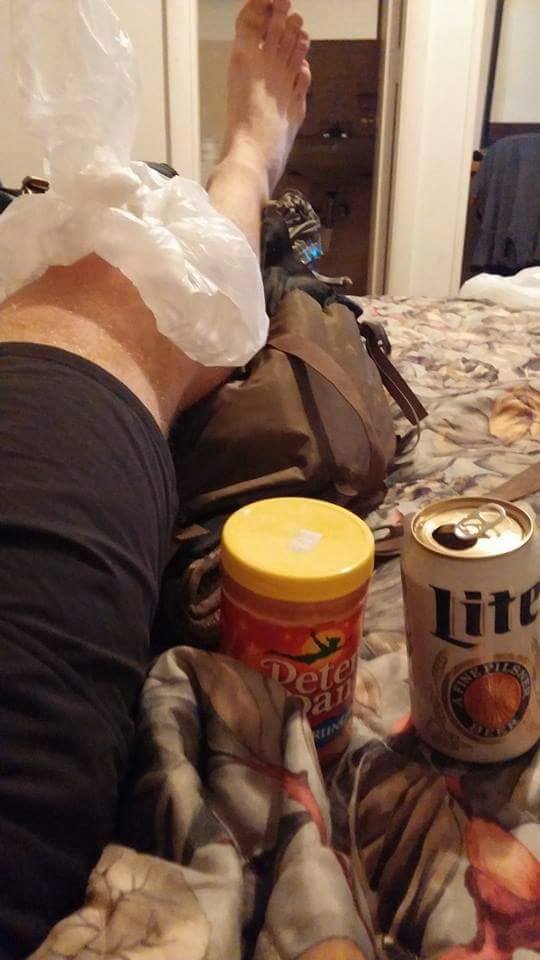 Here is a some what forlorn image of a piece of Hiker Trash lying around as a result of injury. Note the carefully selected comfort items inside the cheap hotel setting, often used as a temporary dwelling place of Hiker Trash while they are in town.

It is not beyond the recognition of scientists and social psychologists that the feelings from the general public towards Hiker Trash often shifts as their numbers grow. It is inconclusive as to whether this is a result of a ‘mob mentality’ taking over the Hiker Trash and causing them to commit more brazen acts or if merely the increase in their numbers causes more concern from misunderstanding outsiders. 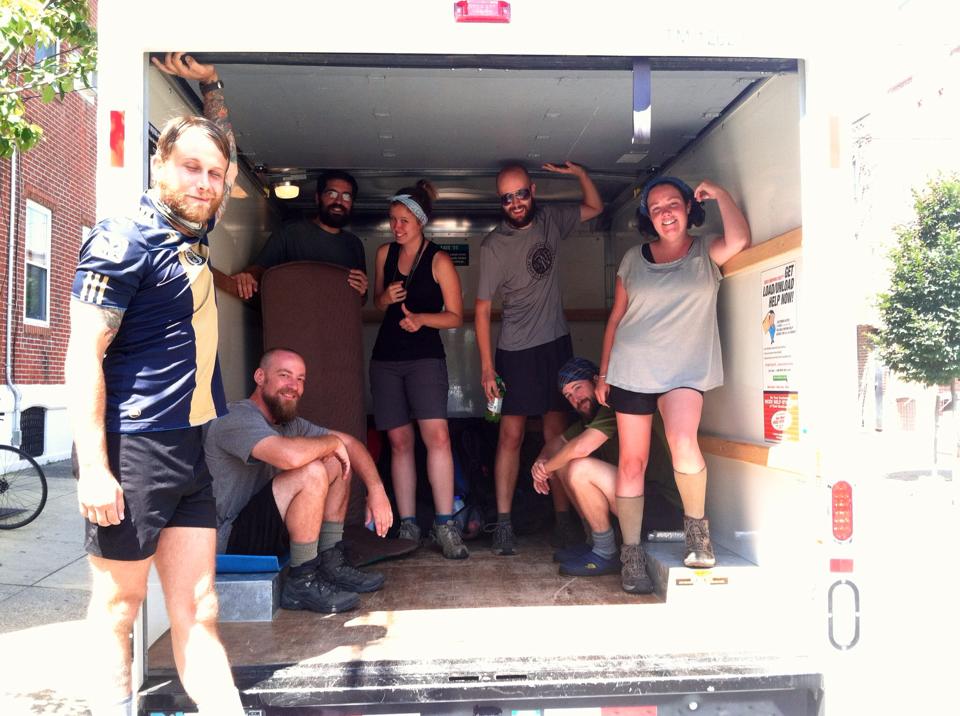 This gaggle of Hiker Trash has proudly found a ride in a box truck back to the trail where they live. Sociologists have concluded that it is a common practice of Hiker Trash to accept what may come their way and make the most of it, often times finding greater joy in the irrationality of happenstance. 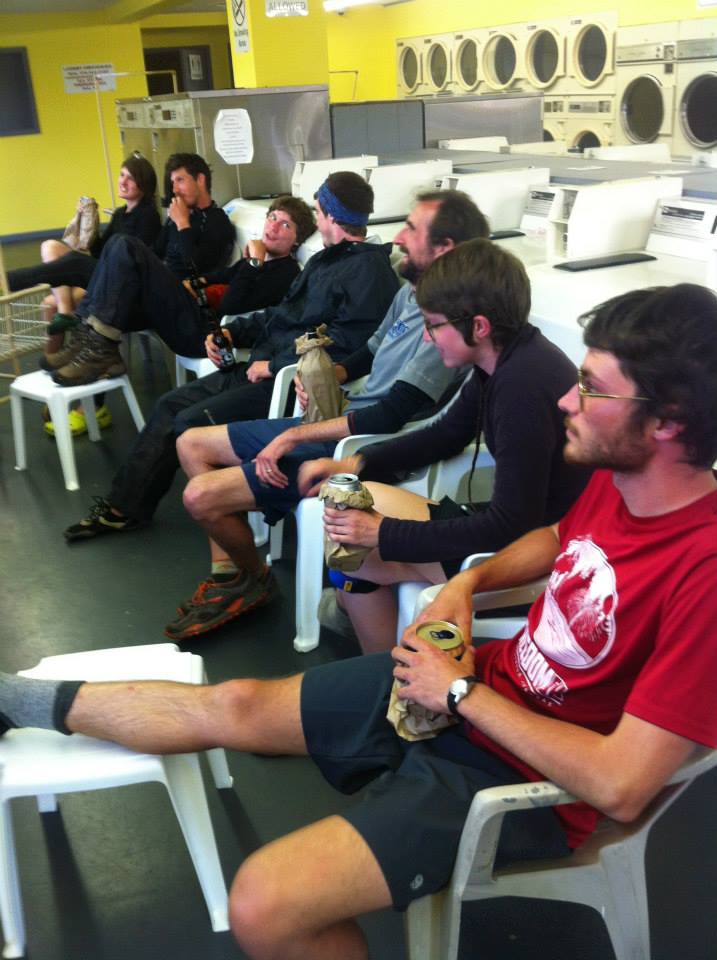 Here is shown a gaggle of Hiker Trash who has taken up residence in a laundry mat, another in-town establishment frequented by this humanoid breed, simply to watch television. An obvious disregard for social convention is displayed in their public drinking habits. 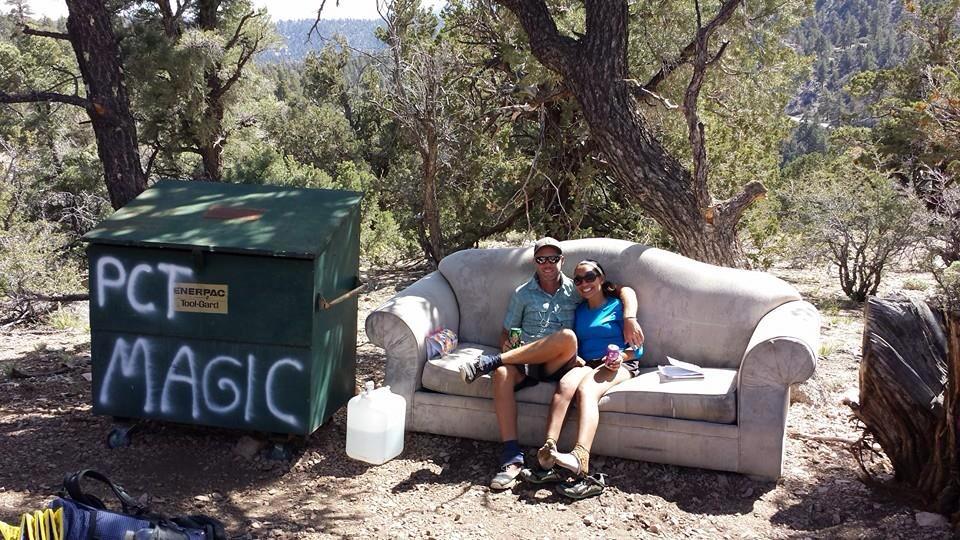 A Hiker Trash couple gratefully lounges on a couch of unknown origin and consumes carbonated beverages procured from the adjacent dumpster, unquestioningly resting their legs and quenching their thirst.

One unfailing act of Hiker Trash is an innate ability to find a way to meet their needs. It has been documented that they have very few needs in relation to regular humans and are also more flexible in how those needs are met. Frugal tendencies and a devil-may-care attitude fuel this aspect of Hiker Trash culture. 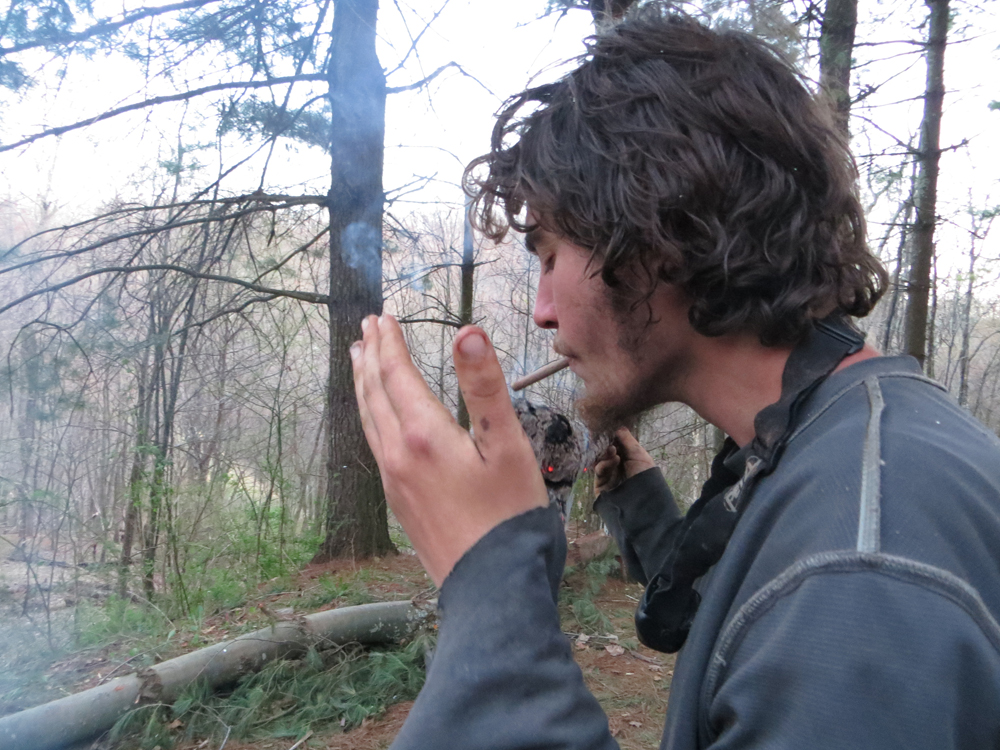 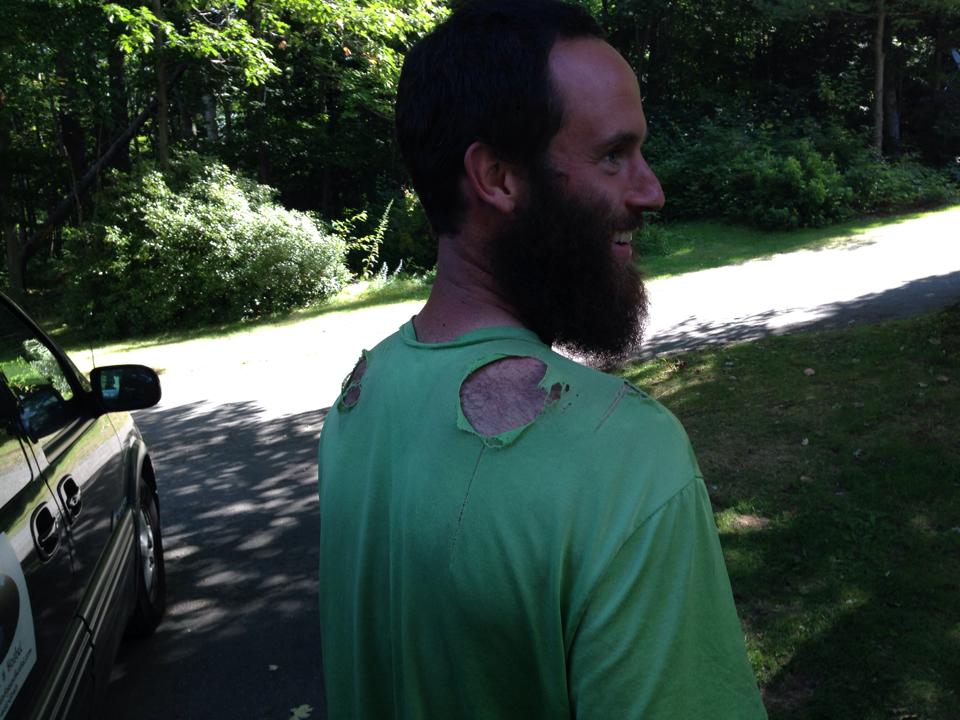 Above is a demonstration of a general belief among Hiker Trash that items declared as over used, broken or otherwise unacceptable by normal people are seen as still worth while in this sub culture. 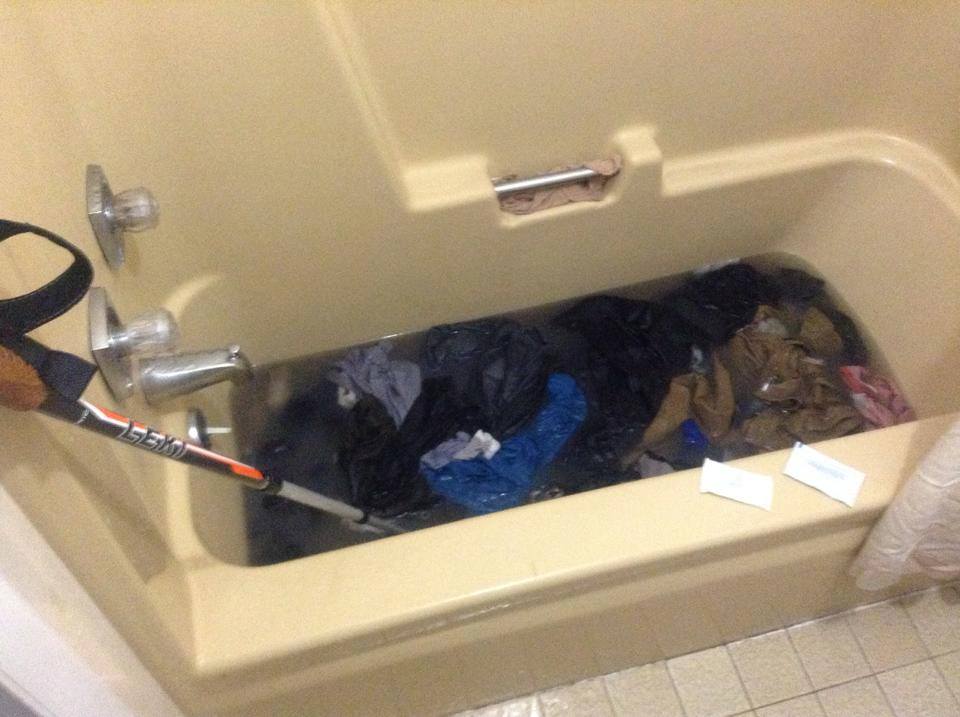 Here the gut wrenching reality of Hiker Trash frugality hits home in this depiction of what scientist discovered was referred to as a “laundry day”.

Many habits of Hiker Trash are failed to be explained by science despite ample effort. The most reasonable assumption is that changes occur in the brain over time as a result of separation from mainstream society. 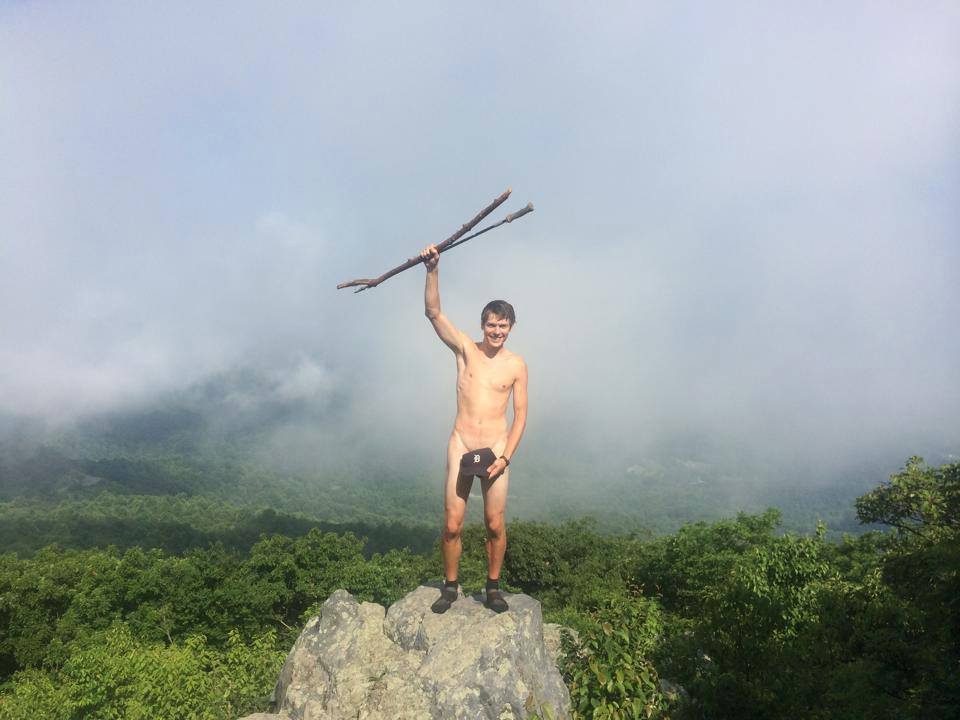 Here is documentation of an astonishing scenario in which a piece of Hiker Trash triumphantly risks his life in the nude on the precipice of a mountain peak. 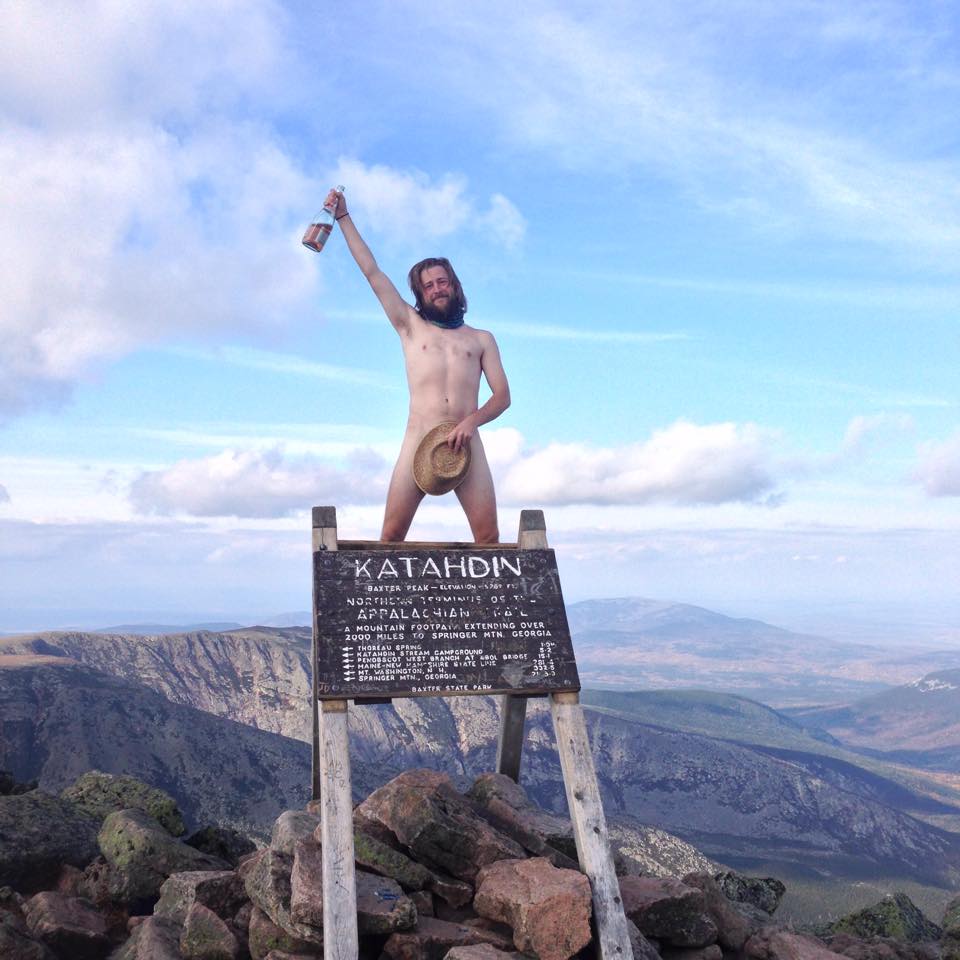 Here is documentation that the act of triumphantly risking ones life in the nude on the precipice of a mountain peak is indeed a premeditated and acceptable practice among Hiker Trash.

It is well known that Hiker Trash carry their worldly possessions on their backs. Scientists have conducted countless experiments attempting to recreate the point in time at which a normal human decides that it’s a good idea to give up their fast moving car and weather proof, climate controlled house for only the contents inside a backpack. No conclusive results have been found. 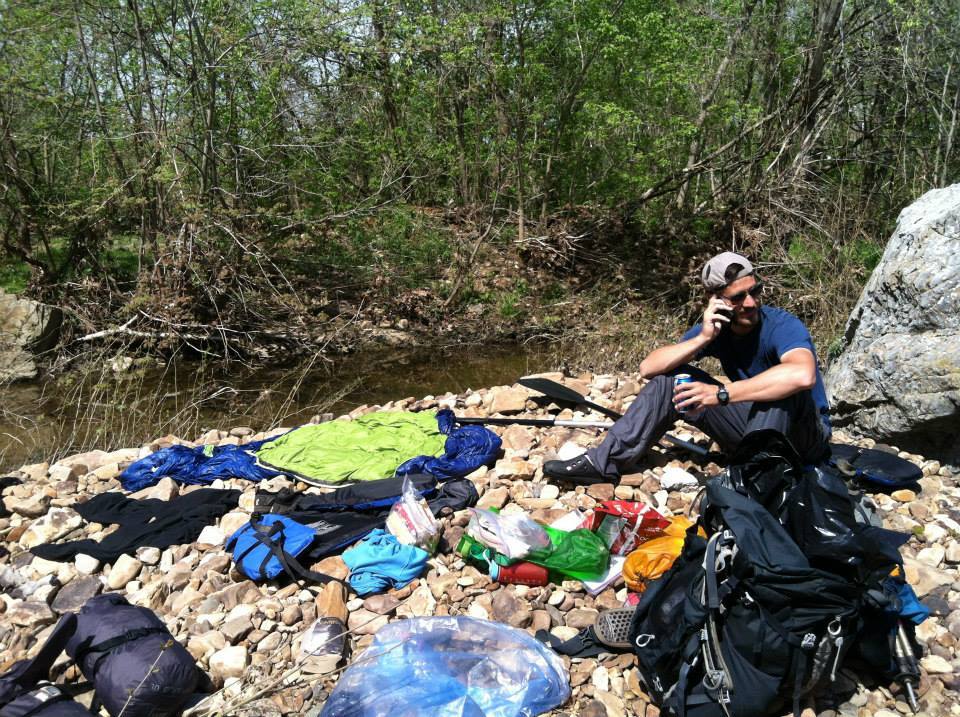 Rare view of the disorderly possessions of a piece of Hiker Trash. 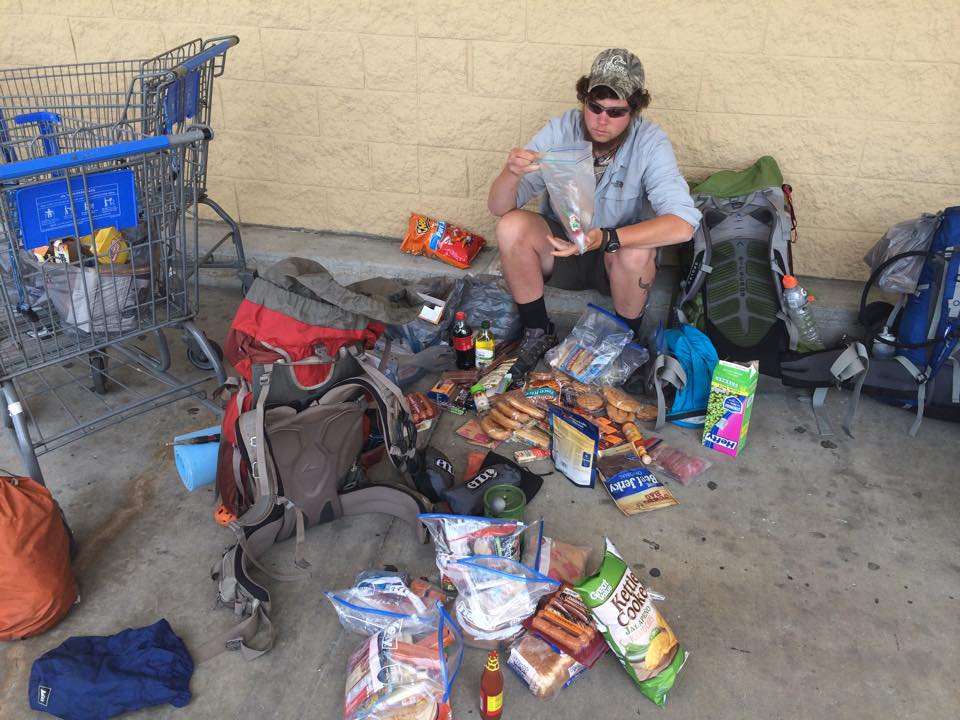 Scientists are currently working to find the missing link between what Hiker Trash carry in their packs and how they fit it all inside.

There are two things that scientists and sociologists have definitive proof of as being corner stones of the Hiker Trash lifestyle. The first, and most important, would be food. Hiker Trash will go to undefinable lengths to acquire food, of which even the smallest of their kind require an extraordinary amount of. 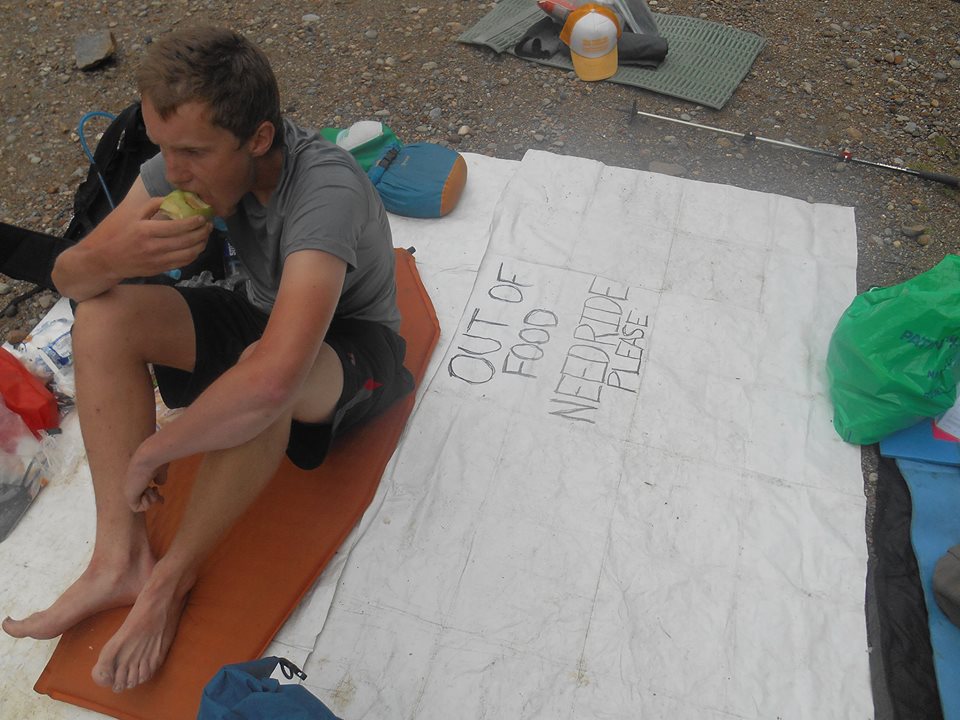 Here is a display of a form of ‘guilt tripping’, a technique used by Hiker Trash to obtain a ride into town and, therefore, to the source of food. 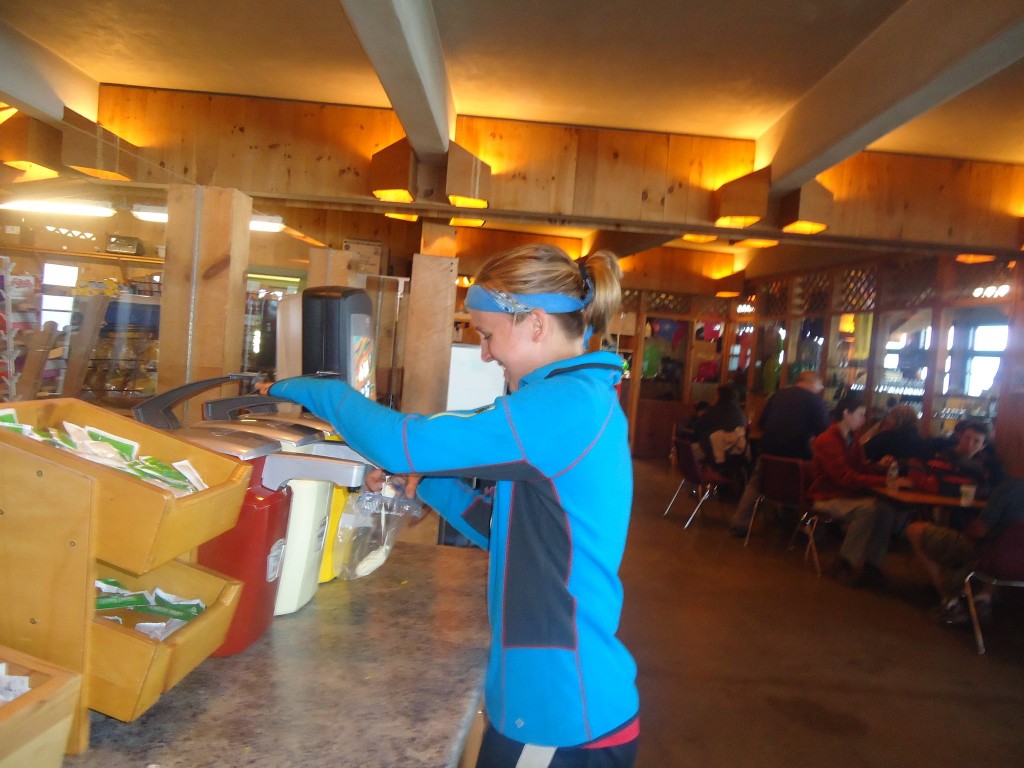 This sneaky piece of Hiker Trash stealthily acquires obscene amounts of mayonnaise from a public dispensary in a cafe. 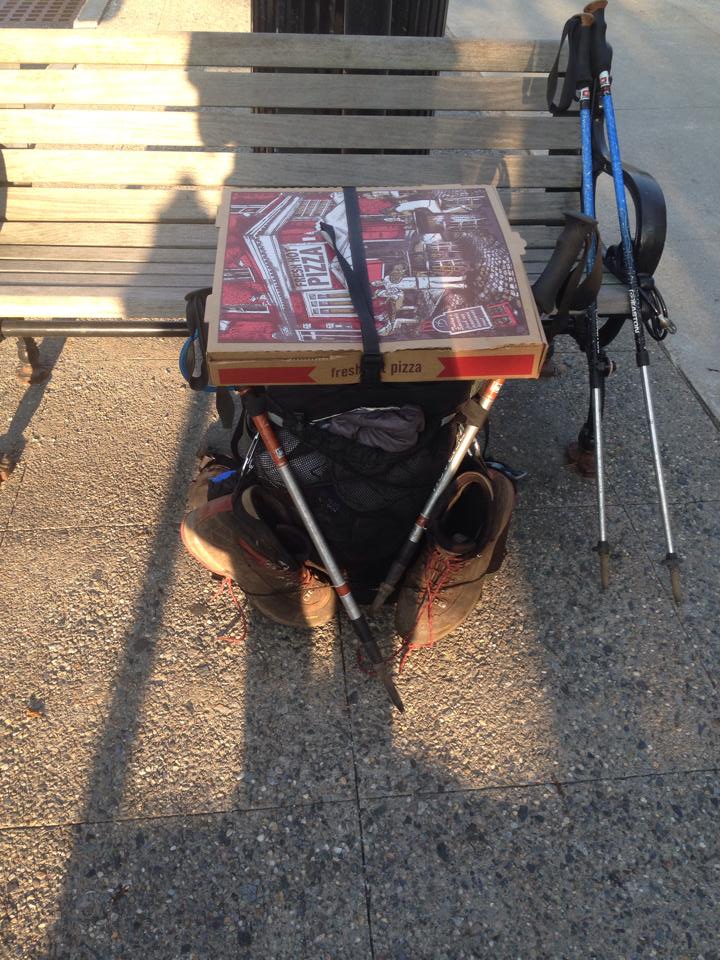 While Hiker Trash is consistently fretting over the weight of their pack, sociologists were baffled to discover that this does not apply to carrying food items, no matter how non-packable. 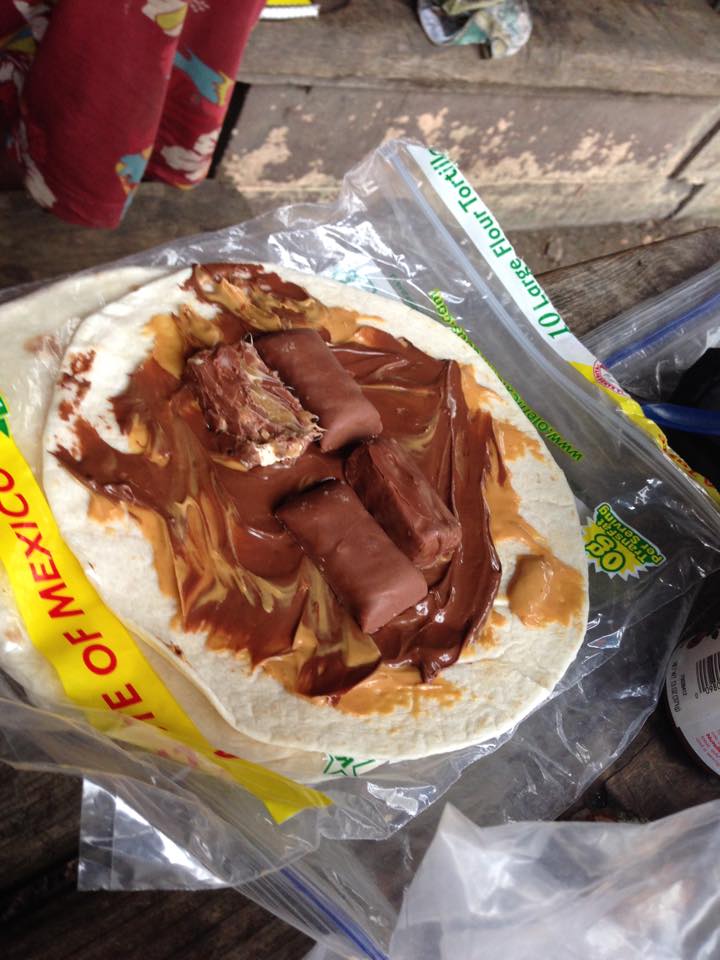 The diet of Hiker Trash has been found to be one of America’s leading causes of jealousy. Here is shown a lunch time wrap made of several sweet and salty condiment spreads and multiple types of candy bars. 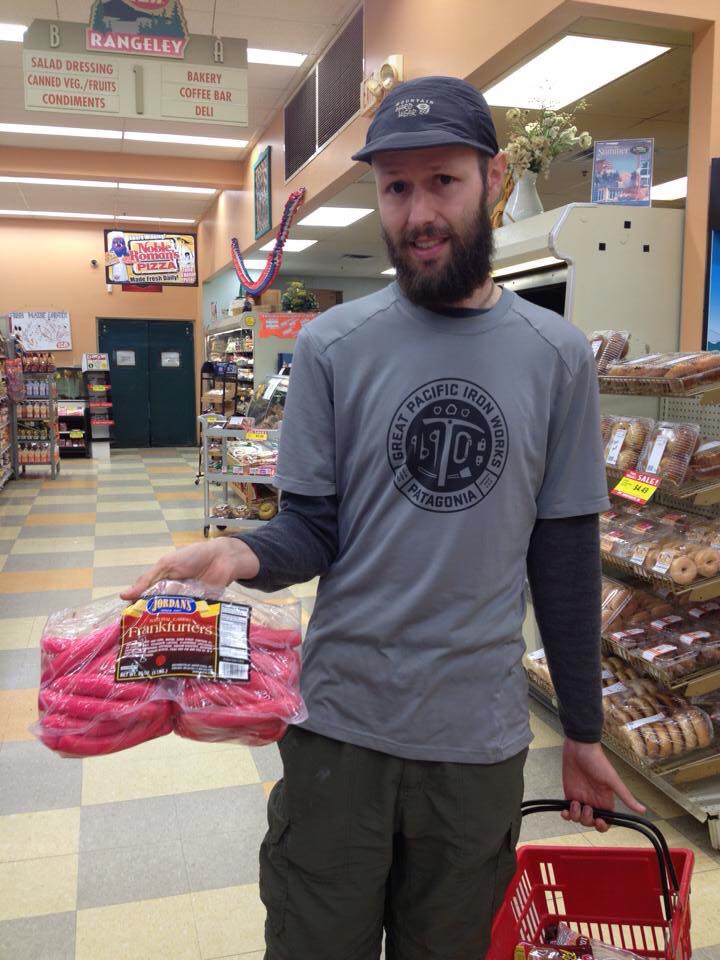 Because of their voracious hunger, Hiker Trash often buy dubious foods and boldly do so in bulk. 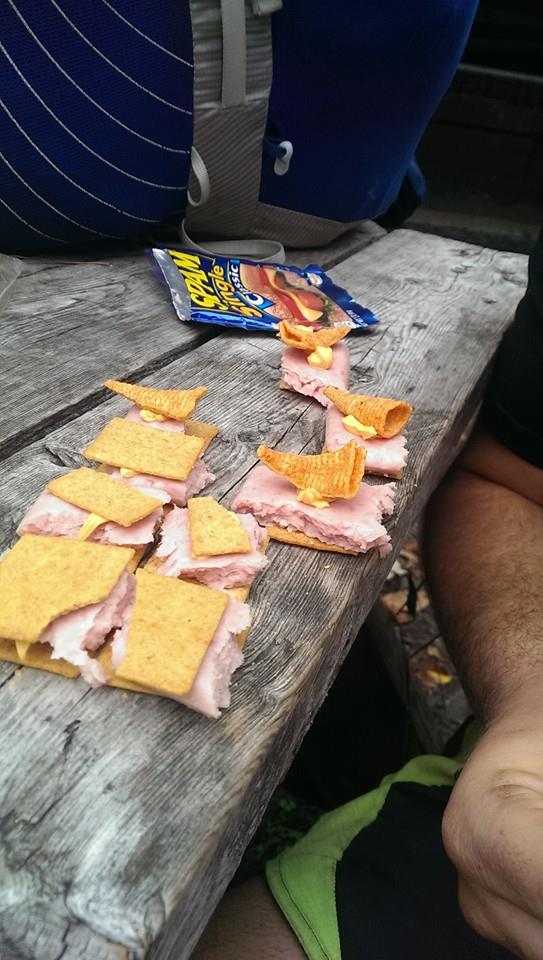 Hiker Trash are the number one consumers of SPAM products in North America. A culinary inclined piece of Hiker Trash creates Spamwiches in the image above.

The second most important factor of Hiker Trash culture is their feet. The feet are harrowed as a holy thing among Hiker Trash. Scientists have observed Hiker Trash looking after their feet with delicate attention despite their near-constant heinous condition. 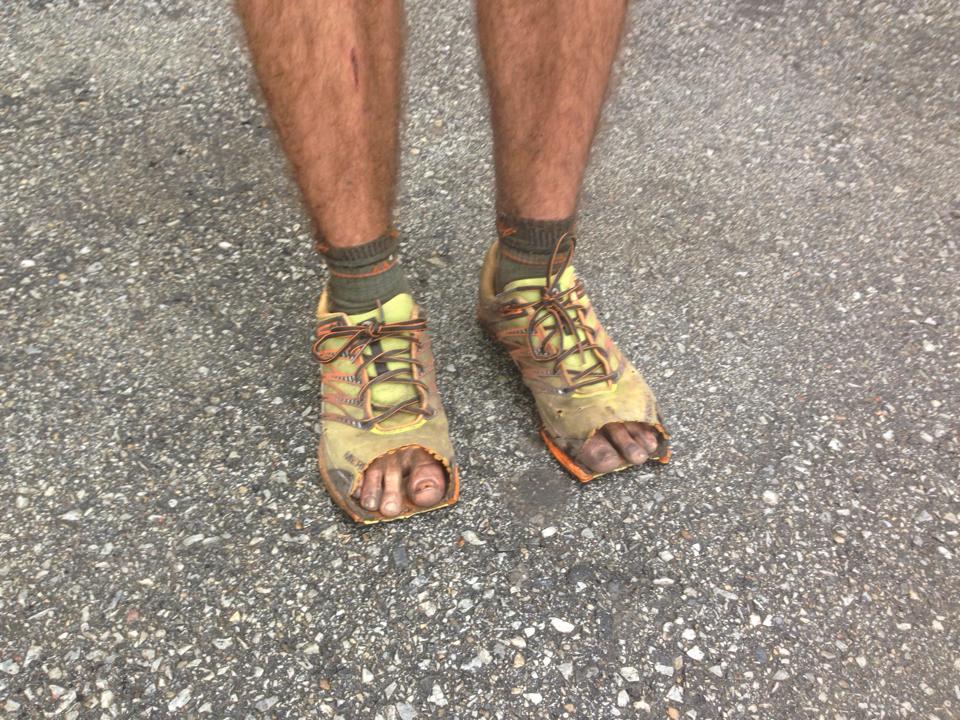 Resourceful piece of Hiker Trash finds a solution to needing better ventilation for his feet. 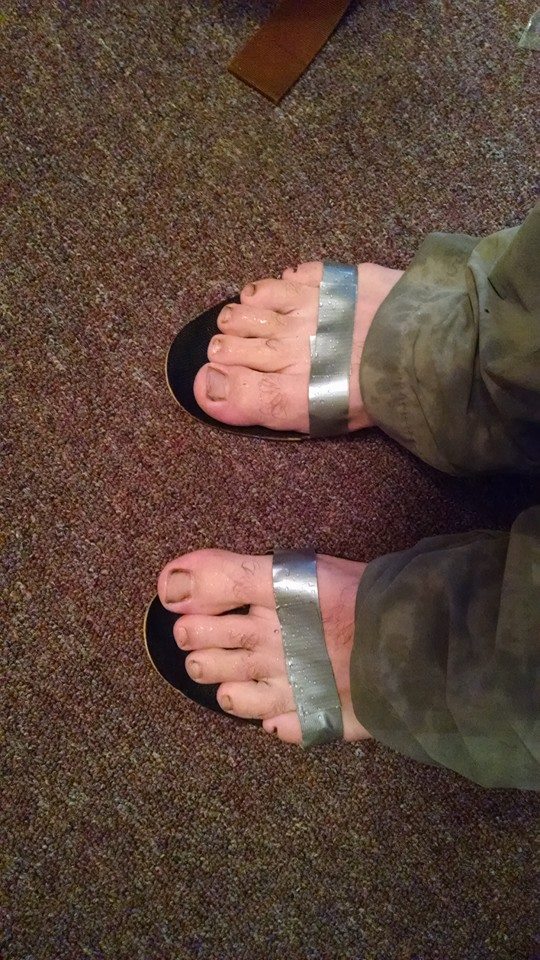 Frugal piece of Hiker Trash builds a lightweight pair of shoes for use in town from common house holds. 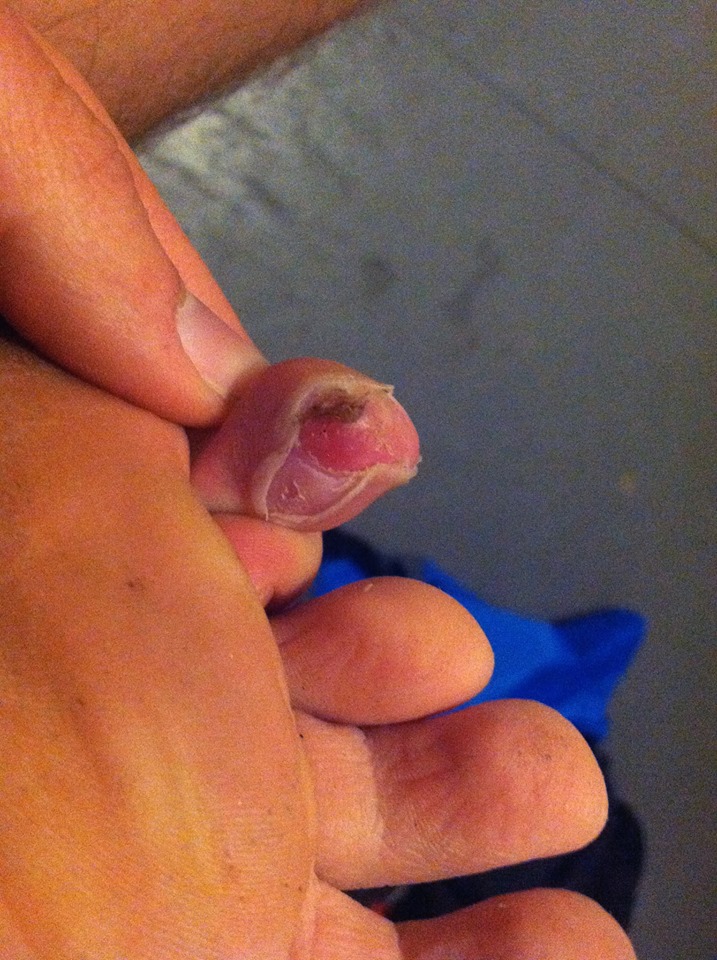 The furthermost extremity of the foot on a piece of Hiker Trash struggles to provide the necessary balance it is designed for. Overlapping blisters have compromised its functionality. 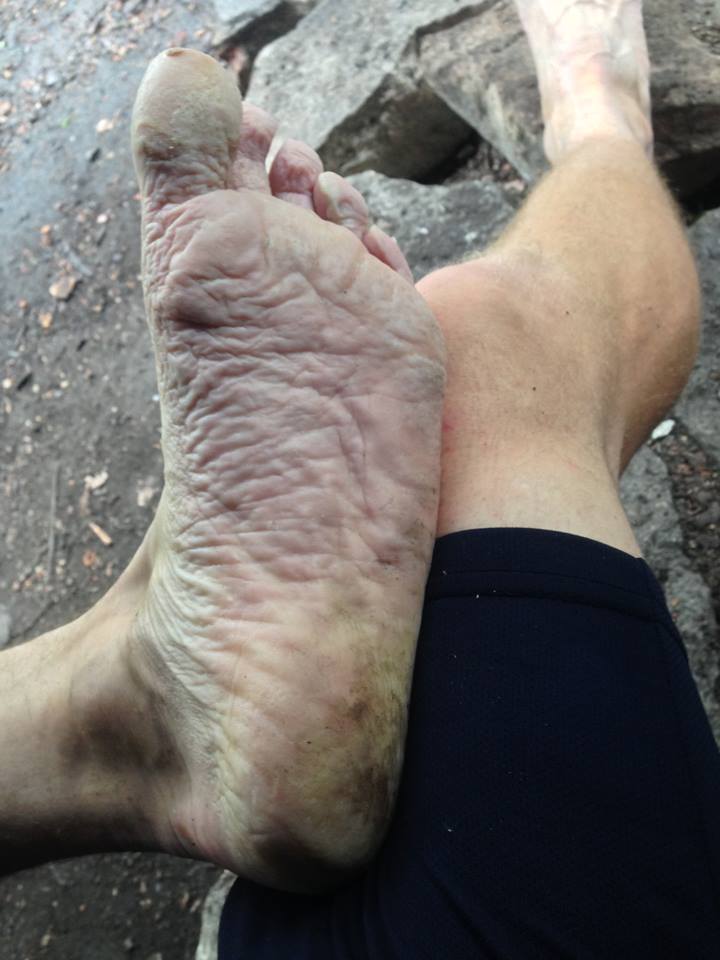 Depicted above is a causality of the grueling physical labor willingly executed by Hiker Trash on a daily basis. Investigation shows that this foot was restrained in a soaked through trail runner and drowned before it reached the shelter. It was later confirmed by doctors that this foot is, indeed, dead.

Scientists and social psychologists still have much research to do in order to understand the habits of Hiker Trash. Much has been assumed and much has been built up over time by stories circulating the world of academia, but little to no confirmed facts are known for sure. They continue to work towards understanding this elusive, migratory subculture, but in the mean time they hold fast to one hopeful hypothesis. As Forrest Gump’s mother once famously said, “Hiker Trash is as Hiker Trash does.”

If you haven’t caught on yet, all of this is silly, nonsensical bullshit celebrating our favorite people in the world, Hiker Trash!! THANK YOU SO MUCH to all the wonderful Hiker Trash out there who contributed images for this post. I wish I could give a shout out to each and every one of you but there are so many! It was awesome going through all the images and a ton of fun to write. Thank you, again!! Long Live Hiker Trash!