In previous shoe reviews, I’ve expressed my frustration with shoe companies that issue a “new and improved” model of a favorite trail shoe that turns out to be considerably less satisfying than the previous version. Sure, occasionally an update works out for the best, but it seems that eventually, every company must succumb to the “let’s wreck our great shoe” compulsion.

Given that, I confess hesitation when the rep from Topo Athletic let me know that the company was releasing version 3 of its Terraventure trail shoe. The Terraventure 2 has been my go-to running and hiking shoe since I found Topo (after my previous go-to company foolishly messed with the design of my previous favorite shoe).

Much to my delight, the rep was able to send a pair of the TV3 for me to test-drive at mile 369 of the Pacific Crest Trail. Even more to my delight, I am happy to report that after nearly 600 tough miles of desert and high Sierra terrain, this is now my go-to long-distance trail shoe; whether it will measure up as a running shoe, I won’t know until I finish the PCT.

As an aside, I started the PCT in another pair of Topos, and they were a disaster – through no fault of the shoe. I had already run some 400 miles in them, and for the first time ever – take note, AT hikers! – my feet really did swell up on the trail. By day 4, they were a mess of blisters. I temporarily replaced them with an acceptable alternative, knowing that the new Topos were on the way soon enough.

And thank goodness: tough, durable, and comfortable, the TV3 is an outstanding shoe for long-distance hikers. Even after nearly 600 miles – when many of my fellow hikers’ Brand X shoes had blown apart at the seams – there was only the slightest wear in the uppers, and the tread was just fine. 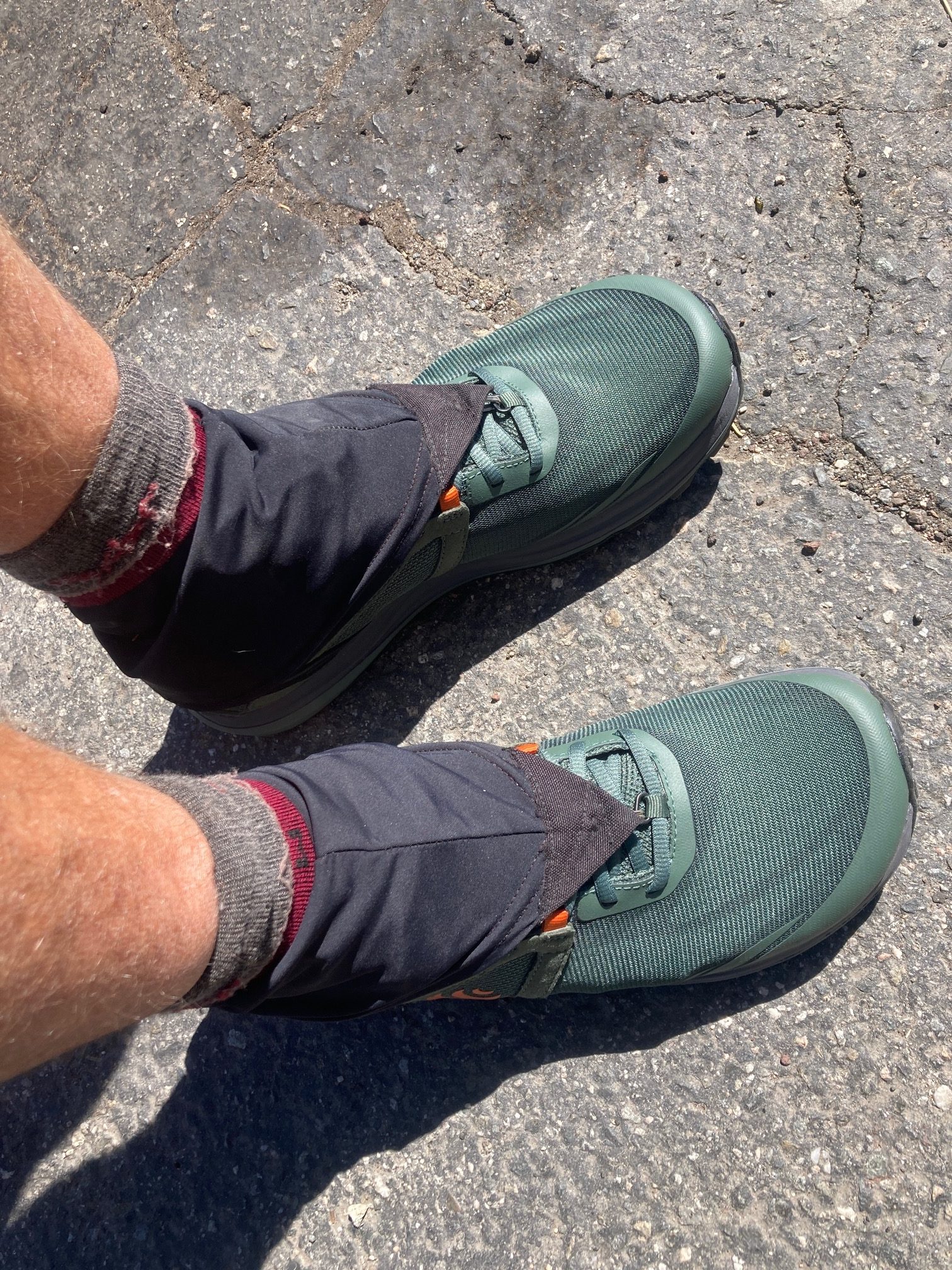 Worn for approximately 340 miles of desert/mountain terrain and 250 miles of high Sierra terrain – including significant snow – on the Pacific Crest Trail. Retired lovingly only due to compressed cushioning. 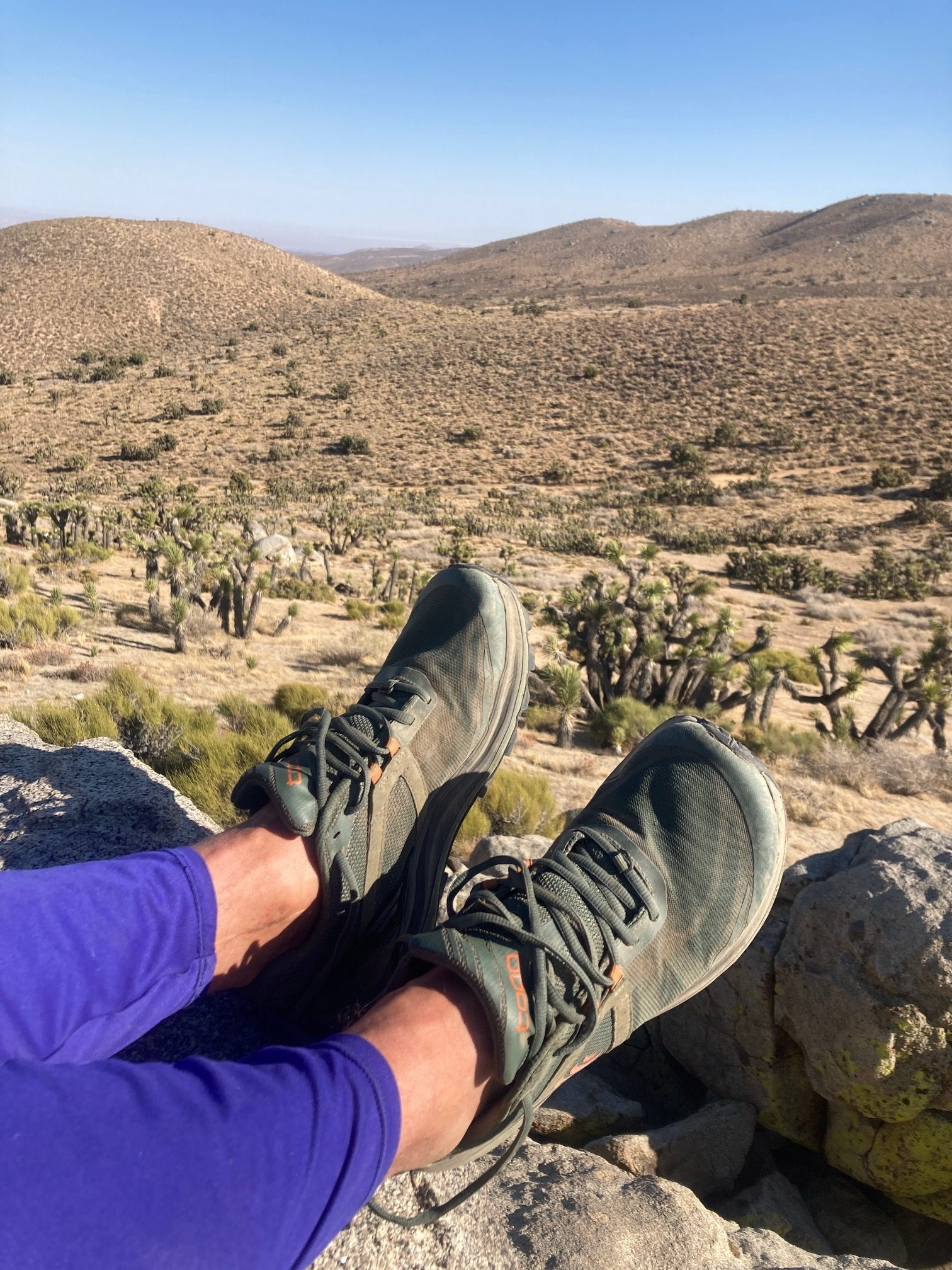 The Topo Athletic Terraventure 3 – so comfy that you can wear them apres-miles on a long-distance hike. Clay Bonnyman Evans photo.

My feet are short (8-8.5 U.S. men’s) and wide with a high arch and instep. I wore Hokas for my Colorado Trail hike in 2015 and the first 861 miles of the Appalachian Trail the following year. But by then, my feet had spread out even more and I finished each day in serious pain from sesamoiditis due to squeezing upfront. Switching to my now-former favorite brand immediately solved the problem.

Nonetheless, I’ve never had to “size up” with shoes until encountering the heat of the southern California desert on the PCT. I was surprised that my good ol’ Topo Ultraventure Pros, size 8.5, were nowhere near big enough – and were wrecking my feet after three days. I made sure to order a size up when the rep sent me the Terraventure 3 on trail.

The TV3 toebox is probably roomy enough for most people who don’t have “square” feet like mine, though slightly less roomy than Brand X’s most popular hiking model. In a shoe with a wide toebox, there’s always the risk that it’s too slushy in the midfoot and heel. The first generation of my previous favorite was as sloppy and slippy as Vermont in June. Walking the Pinhoti Trail, it felt as if I were wearing old bunny slippers (a problem corrected by Brand X in v. 1.5, which was perfect … only to be destroyed in v. 2; sigh).

The heel in the sized-up TV3 is a great fit for me on trail, and Topo shoes have always fit well in the heel for running. It’s snug, but not tight. It’s also got a lacing system with plenty of adjustability for different foot shapes, including my high arches and instep. 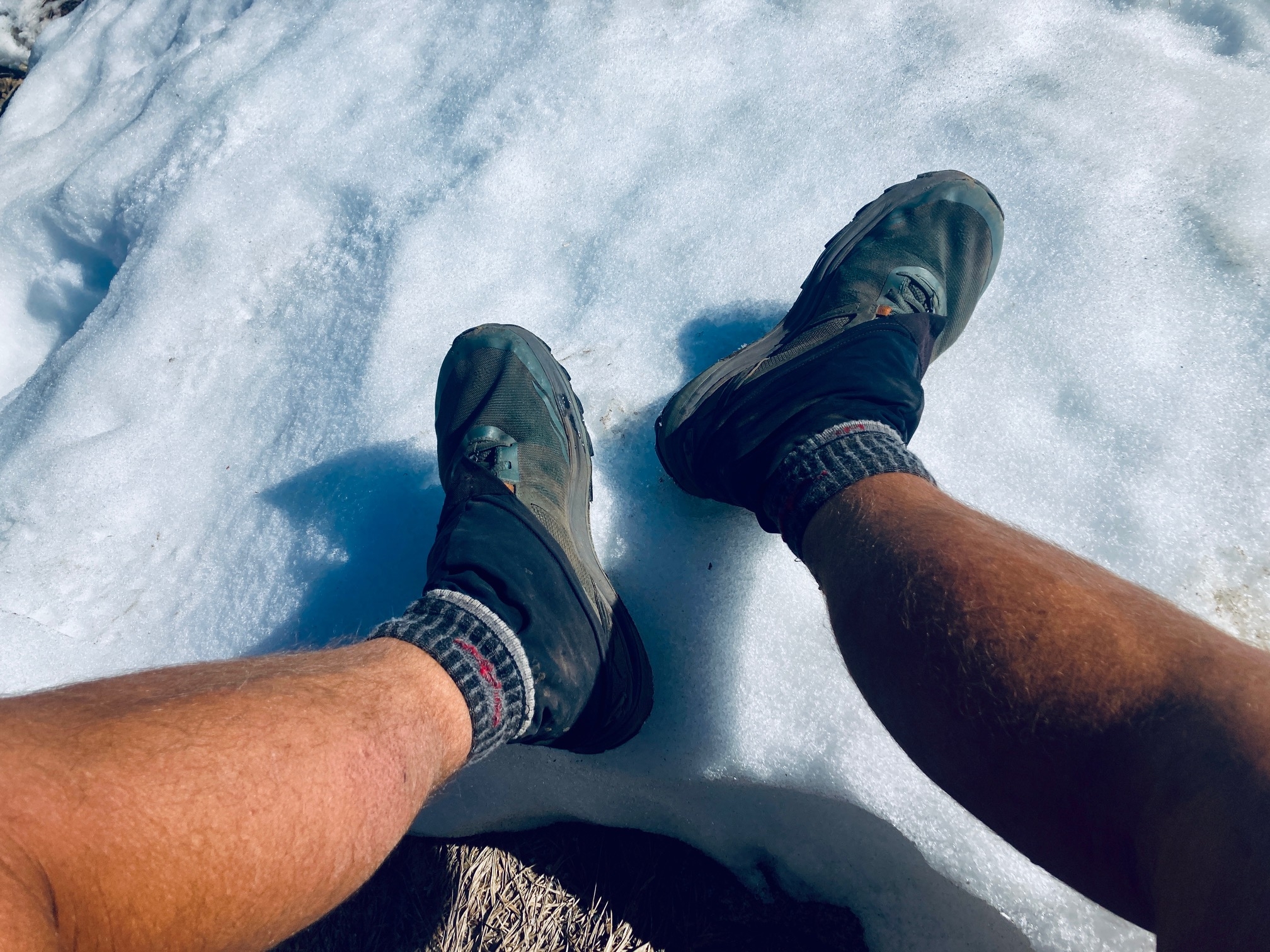 The Topo Athletic Terraventure 3 was plenty grippy for the slippery, steep snow of the high Sierra in mid-spring. Clay Bonnyman Evans photo.

The Terraventure 2 is honestly the most comfortable trail/backpacking shoe I’ve ever worn – surprising, given how durable (500 miles and counting on my latest pair, with no visible sign of upper wear) and supportive it is. I instantly adored the comfy Terraventure, which I took out for 40 rocky AT miles in Pennsylvania after just a few wears.

So of course, I was worried that the Terraventure 3 wouldn’t measure up. Thank goodness, it did. From the moment I put on this shoe in Wrightwood, California, it fit me perfectly. Not a single blister or even a hotspot, despite days as long as 36 miles and conditions ranging from 95 degrees across the Los Angeles Aqueduct to the frozen peaks of the Sierra.

The TV3 feels beefier than the previous version. It seems to be built for rougher, tougher trail use, and yet it’s only the teensiest bit less comfortable than version 2. Still super comfy, and there is clearly a payoff in durability (see below).

I’ve described the feel of the Terraventure 2 as “plush.” I’d say the TV3 is plenty comfortable, if just a shade below “plush.”

This. This is the most amazing thing about this shoe. I beat the $%^&! out of these shoes for nearly 600 miles, and when I decided to retire them, it was only because the cushioning up front felt pretty mashed out (no insult, that, after nearly 600 miles of super hard use). There was the tiniest abrasion on the upper of the left shoe, but the toecap was firmly in place (if Topo can get this right, why can’t other manufacturers?) and frankly, the tread looked almost as good as new. I don’t know how Topo has managed to make such a bombproof shoe without adding too much weight, but I’ll take it. 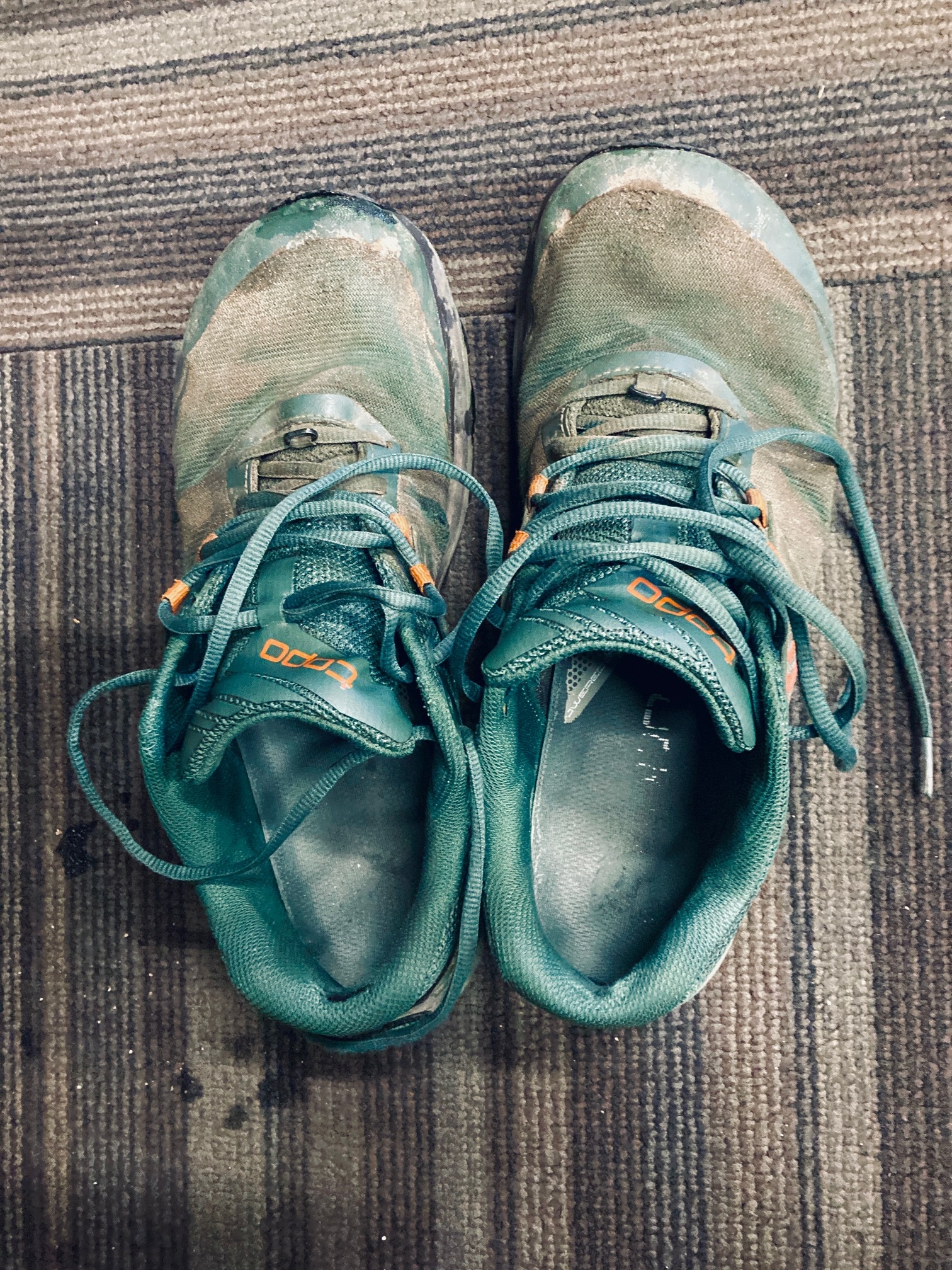 Topo offers a unique gaiter system, which is both secure and easy to use. The gaiter attaches to a small metal loop at the bottom of the tongue in front, like most brands. But in back, Topo gaiters attach via metal clips to two small, holed rubber nubs on the heel of Topo shoes.

That’s a cool innovation, but the gaiters are definitely heavier than, say, Dirty Girl Gaiters. Unfortunately, if you want to use a Velcro-attached gaiter, you’ll have to do what I did and buy some Velcro at a hardware store. I understand Topo wanting to promote their own gaiter, but not every hiker will want to use it. 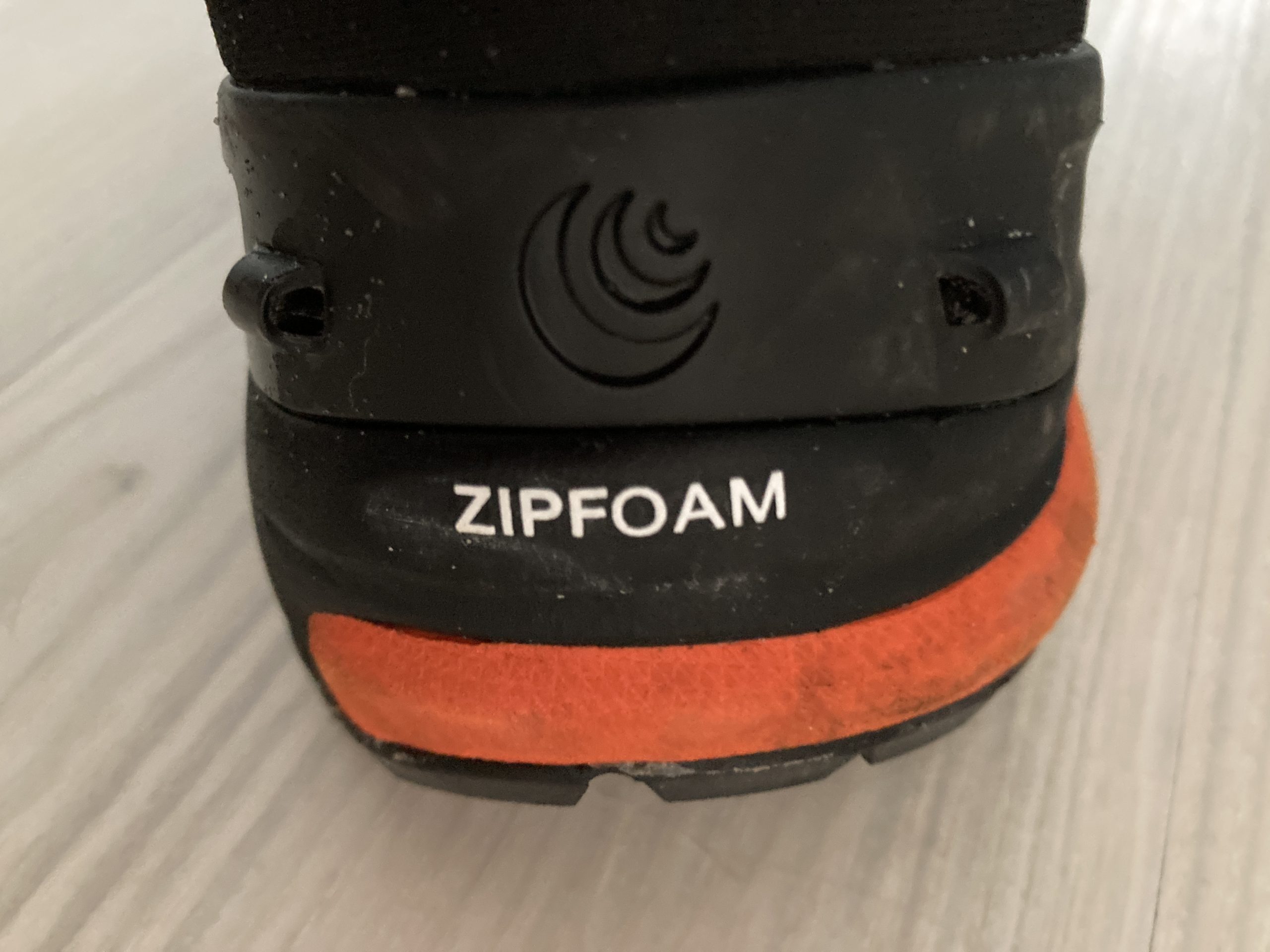 And while I’m always skeptical than an insole can truly repel odor long-term, the Terraventure 3 miraculously effused no odor – truly, none – until it endured a couple of weeks of constant wet feet, courtesy of Sierra snow and runoff. I was genuinely surprised and pleased, though admittedly at the end, I had to put my shoes several feet from my tent; when they turned, they really turned.

I would also like to note that Topo’s laces stay tied all … day … long. Again: If Topo can, why can’t other manufacturers get this right? 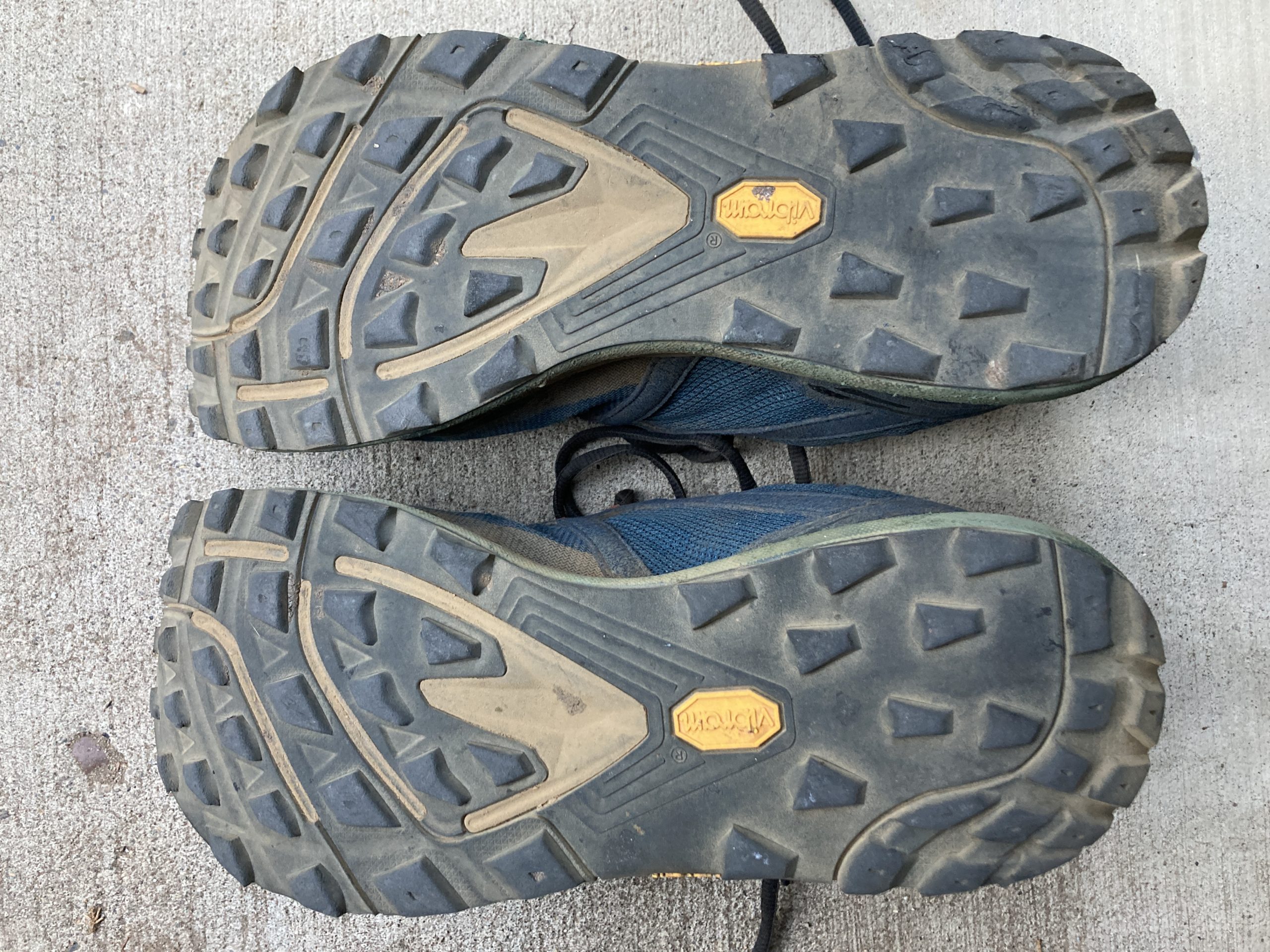 The tread on my second pair of TV3s after 400 miles on the PCT. Clay Bonnyman Evans photo.

This will be my go-to hiking shoe until/unless Topo significantly changes the design or durability becomes lacking in future models. The Terraventure 3 doesn’t strike me as a running shoe – though as I say, I love trail running in the TV2. So I wonder if Topo isn’t aiming v. 3 squarely at the hardcore hiking community. If so, bravo: This shoe is tough, comfortable, more affordable than some comparable models from other manufacturers.

Hoka One One Speedgoat 4.0

The Topo Athletic Terraventure 3 was donated for purpose of review.