Hitching Is More Dangerous Than Hiking.

I was happy to be leaving Lincoln to get back on trail. Or was I leaving. Thumb up, hiking to the edge of town. No hitch. I stopped into the library to look in the mirror and practice positive hitching skills. You know, smile, wave, thumb, brandish clean pack and poles. Back out on the street hitching. No hitch. I went into the campground bathroom and trimmed my beard slowly with my toenail clippers. Painstakingly slow with the occasional pluck. I put on my buff to hide the nasty neck hairs, switched out ripped frog toggs to colorful tights and a puffy. Back out hitching I finally got a ride.

My 2 hitching Angel’s were a middle aged man and woman driving a new pick up truck. After a few “thanks so much,” appreciated comments the man driving said to his partner, 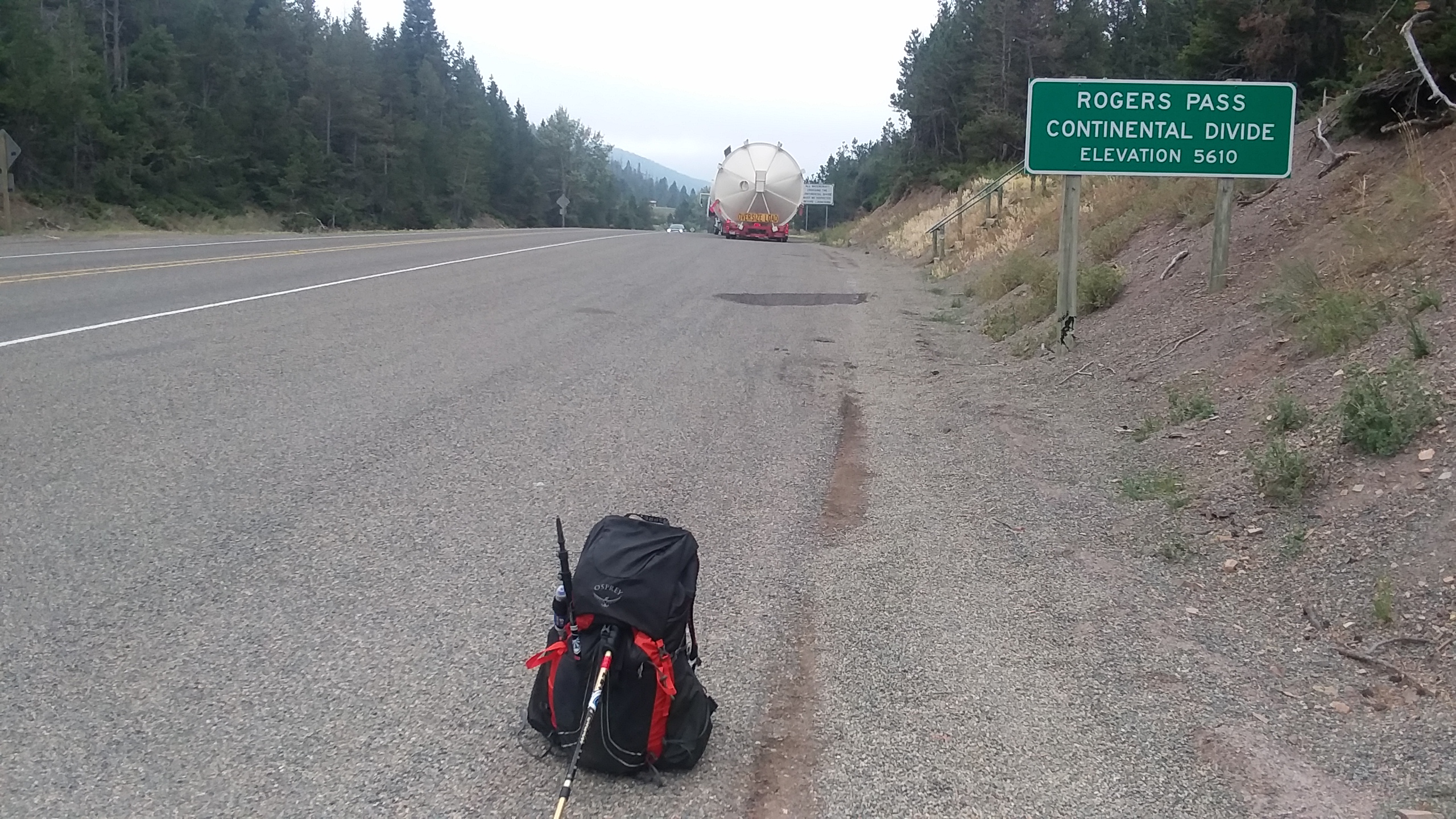 “See I told you he’d be ok. Dressed like that in all those colors.” He and his partner drank some booze from thier cups. I could tell from thier speech that they had been drinking for a while. The woman started gagged and he pulled the truck over for her to hurl.

After a delightful sight and smell of exorcism puke the driver accelerated quickly to a dizzying speed. I buckled my seat belt and brought up the directions to the pass. I told him it was just 15 more miles.

Confused I asked where they were going?

I was happy for the ride but looking forward to getting out. After a few miles he pulled over at a turn with a slam on the brakes. “Here you go,” he said.

“Thanks again. Just going to grab my pack out of the back,” I said loudly. One hitch in Big Bear, CA on the PCT took off with my pack. But I ran after him and pounded on the truck and got it. Didn’t want that to happen again. After I grabbed my pack they took off spinning rocks in my general direction.

I started walking and hitching again. After a while an old car pulls over way up the road. So I ran up hill with my pack filled with 200 miles of food to catch the car. I had a hitch do that earlier on the CDT only to take off when I caught up. Kinda funny in hindsight although I was pretty pissed at the time.

When I caught up to the car a teen asked where I was going then offered me a ride. With his window rolled down I could see the smoke billowing out and the sweet skunky smell of pot. We drove off slowly because the car was old, hill was steep, and the driver was high.

Finally at Roger’s pass (coldest place in lower 48) he dropped me off and gave me a powerade. That was pretty nice.

On the trail I quickly transitioned from townie to caveman. My wilderness instincts were on. I thought about the poor woman that was dragged out of her tent by a grizzly earlier in the year as I repeated, “hey bear!”

The wind started picking up as the temperature dropped. And I thought about why this area was the coldest. -70 F air temp. In 1954. Brr. I’d hoped that it wasn’t going to get below freezing.

Soon I came to a yurt on the divide. I opened the door and found a sign in book that I had seen other hikers sign. The structure was for some research group from Jullian, CA. The wind was howling and it began to rain. Even though I had more sunlight to hike it was an easy decision to stay. The wind blew open the door so I put a board in front of it. There were lights inside powered by a solar panel so I lit up the yurt and made some grilled some cheese sandwiches on their camp stove. 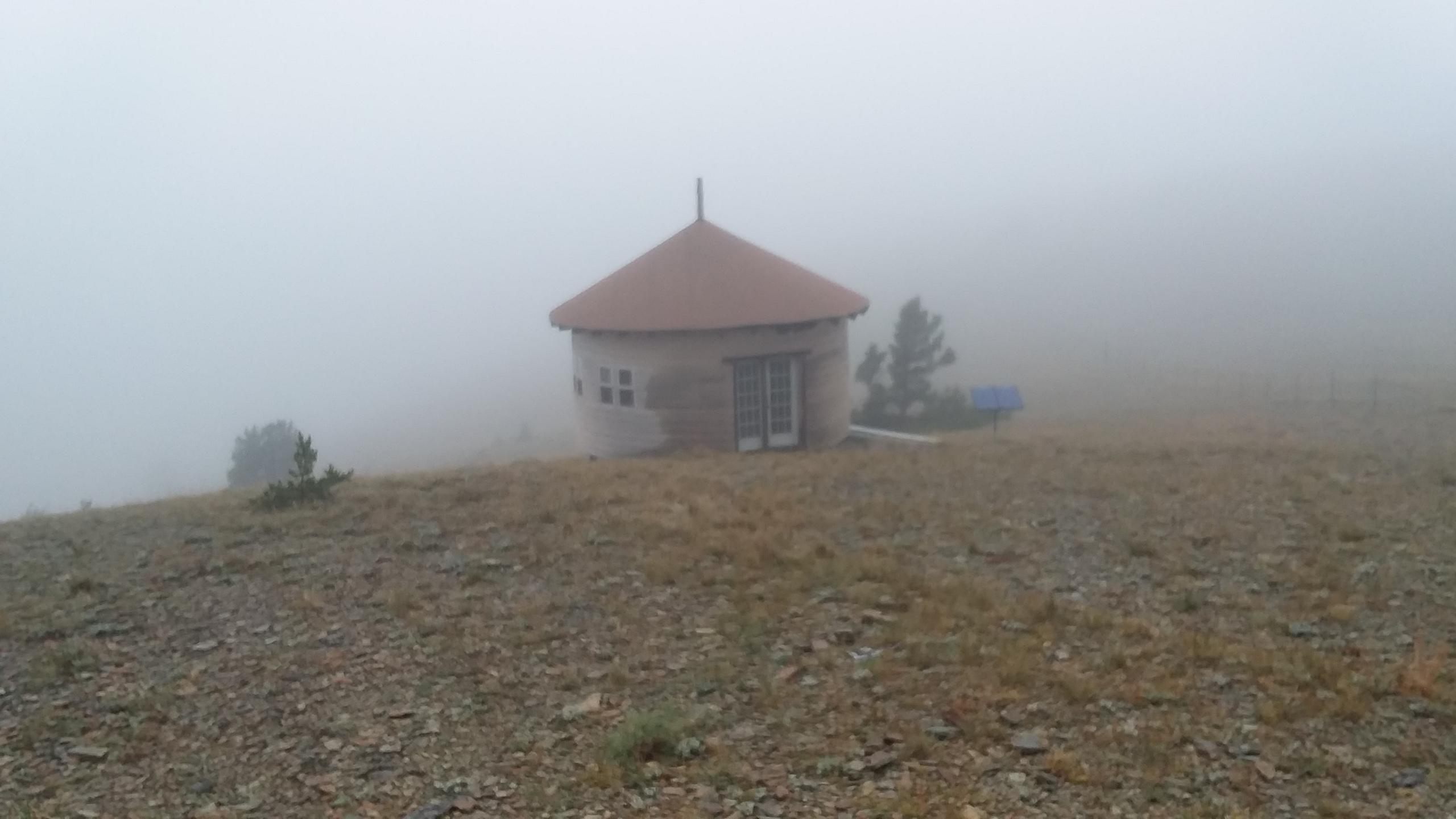 As I climbed up into the loft and into my sleeping gear I could hear the wind outside howl around the yurt. The rain would snap on the west windows. I was so glad to be warm and dry. And I dreamt of making a yurt like that one on some wonderful land someday.

Hiking into the Bob Marshall Wilderness I found great maintained trails and delicious huckleberries. Sometimes to thimbleberry bushes would overwhelmingly take over the trail. At least there were few blow downs to deal with.

Some section hikers told me of a grizzly down the trail in a meadow. And I had already seen its tracks. I kept my sences on it but I was easily distracted by the giant rock face to my West. ” The Chinese Wall.” Sitting down on a rock facing the wall, I played my flute with long pauses so as to hear the echoing delay of sound reflecting off of the cliffs. It was a relaxing moment.

A few songs later I walked down the trail and saw it. The grizzly. It was way down a hill in a meadow. So I hiked quietly and quickly glancing at its magnificence. It was over 100 yards away. Light colored, with a hump back and huge. I think it was eating berries but not sure. As long as I wasn’t on the menu I was glad. My food and smellables always stayed in my smell proof bag unless I was eating. So I felt reasonably safe. 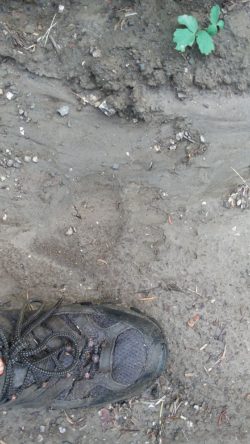 The end of the trail was getting near so I was motivated to do more miles. I hadn’t done much night hiking but just bought new batteries for my headlamp. Feeling strong I pushed some dark miles. But It was hard to see my feet because of the brush but my trekking poles caught me when I would stumble. I hadn’t seen anyone in a few days and was feeling lonely. The darkness amplified that feeling. One night I came to a meadow on a ridgeline in the darkness. I flashed my headlamp over to my right to see 2 green eyes staring back at me. My body felt a rush of warm blood flood to my muscles. Was it fear or fight? Were the eyes a friendly deer or a pissed off grizzly?

I trekked on putting a soundtrack of barking bear hunting dogs playing loudly off my phone. The eyes didn’t move. While still moving away from the eyes I repeated, “hey bear.” I clicked rocks together, threw a couple into the brush, clicked my sticks. The eyes just stared. I thought maybe someone put some glow in the dark eyes on a tree. What a prank. It was probably and elk or deer or something.

The excitement gave me enough energy to make it to the flathead headwaters where I spent a somewhat restless night. 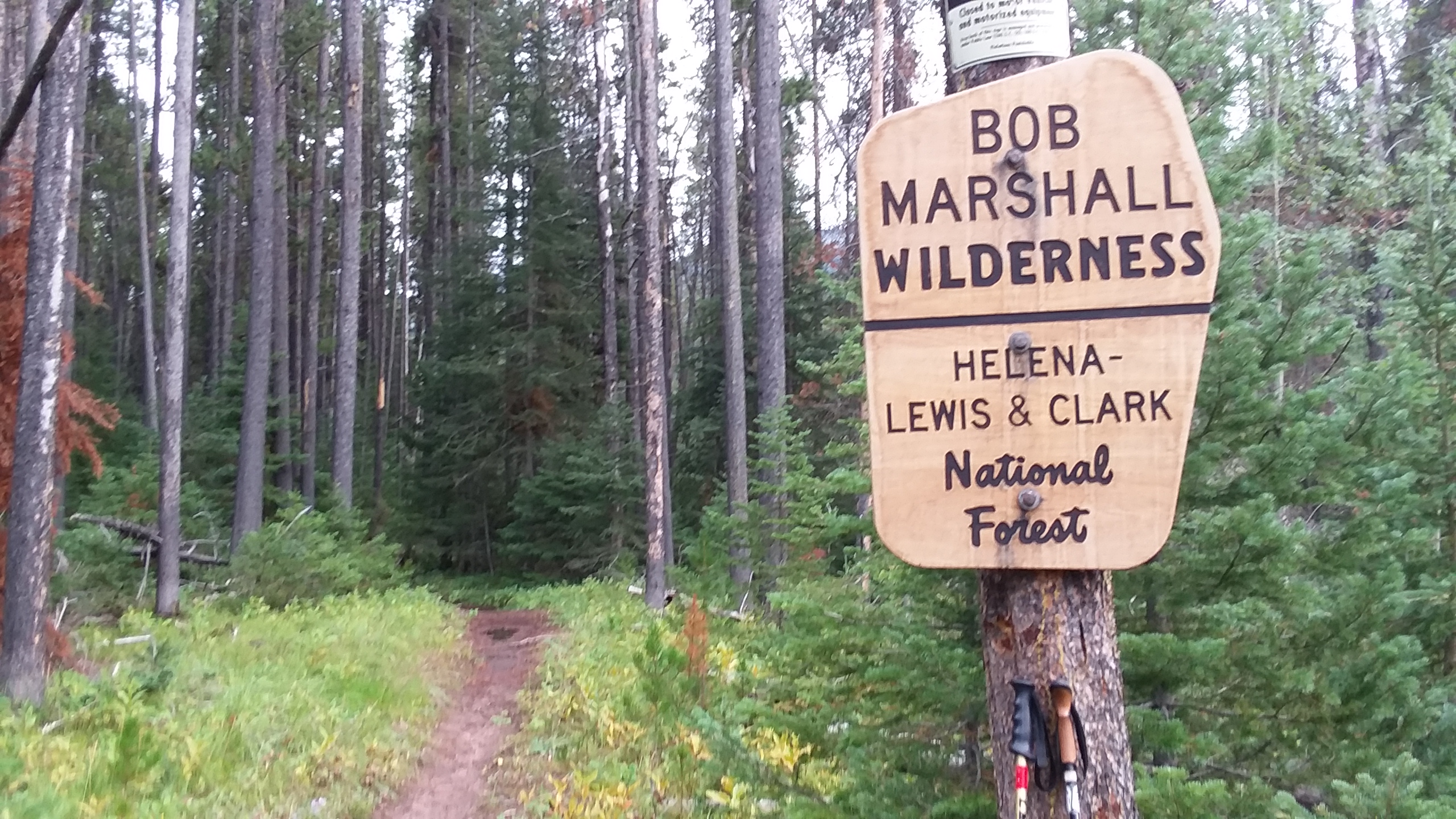