Why Women Worry: A Fear of Hiking Alone is a Product of Our Society

This article is written in (semi agreement and response) to Glacier’s article. While I agree with what Glacier was saying, I believe that there is a far deeper problem that didn’t get addressed. 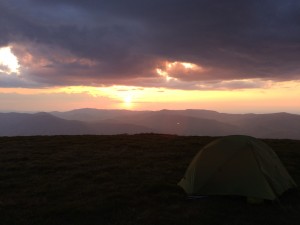 A new, less sexist day dawns…this actually might be a sunset.

On the Appalachian Trail, the most common phrase I heard from people who were not hiking was “be safe out there”. I made a game of it with my Trail Family to see how often people told the two females of the group to “be safe” compared to the guys, who were always told “have fun”. It was frustrating, but understandable. I was a woman hiking “alone” in the woods. It’s not like I hadn’t dealt with underlying sexism before.

However, the most worrying issue is that women do not feel comfortable hiking alone. It wasn’t until I got out of the woods that I realized how angry and flippant the hiking community got when women asked if the Appalachian Trail was safe for them to hike by themselves. I have seen posts on a number of sites, mostly by men, dismissing the fears that women have of hiking alone. These posts tend to address the episodes themselves, rather than questioning why women feel this way. The problem, of course, goes much deeper than an individual’s fear, and has much more to do with how society perceives women, and how women perceive themselves.

For some people, being alone is hard. For women especially, being alone can seem like a daunting task, rather than a time of introspective solitude. When women note that women who hike alone are “brave” and ask if it’s “really safe for you to be out there” and state that “I could never do this alone”, it is more of a glimpse into how our society perceives women than a reflection of a woman’s incapabilities. Our society is constantly hammering it into our heads that women shouldn’t be alone. We should have boyfriends or husbands. If not these two males in our lives, at least we should have some cats. While men get cool bachelor pads, women get comments on when they’re going to “settle down” with “a nice boy”. It’s not about being incapable, it’s the fact that the society we live in basically emphasizes how women have to be reliant on men.

Additionally, women face more harassment in everyday life than men. It is only natural that women would fear the same amount of harassment on the Appalachian Trail than on the street. Personally, I did face sexism on the Trail, and it was mostly by fellow hikers. It wasn’t harassment per se, but it was definitely pointed and made me uncomfortable. Some guys commented on my looks, while others attempted to undermine my achievements. The sexism I faced on the Trail was uncommon, but definitely one of my least favorite things about the experience. It was disappointing to see that even when you took yourself out of society, some of the worst parts of the world still pervaded the woods. Imagine facing harassment in everyday life when there are hundreds of people around. Now, imagine thinking that harassment could still happen, but with far less people around as a security blanket. Sure, the woods are a lot safer than, let’s say, NYC, but how is some one who has never been alone in the woods supposed to know that? Shouldn’t we be encouraging women to get outside of their comfort-zones, instead of berating them for being scared?

Saying that women who are afraid of being alone in the woods are “idiots” and “children” is just blaming them for a problem that has far more to do with women’s experiences in everyday life. It’s understandable that women who have not spent a significant amount of time alone in a new environment would think the worst, because we’ve seen what happens when a woman is by herself in everyday life. That’s why being a vocal female traveler and backpacker is important. We are the anecdotes that can be told to these people who want us to “be safe” rather than “have fun”. We are brave, and the bravery of stepping into the unknown shouldn’t be disregarded, it should be lauded. I hope that my journey has encouraged more women to feel safe on the Appalachian Trail, but I more than understand why being alone in the woods would be daunting to a woman. I think educating and empowering women and men through stories of solo women travelers is the only way that we can make women more confident about being alone, instead of dismissing their fears. Thankfully, I think this is starting to happen.