A few days ago, something weird happened…we entered New Hampshire. How is it possible that we have already made it to the second to last state? It feels like yesterday that we were just exiting Virginia, not even halfway through. But here we are. You would think that by now, I would have the trail all figured out. The reality is much the opposite. We’re still making gear updates, we’re still not great at planning more than about 2 days ahead, and our strategy for resupplying has totally changed. A few nights ago, I was doctoring my feet while heating my dinner when I knocked over my entire pot of food and spilled it into the wet dirt. I could only salvage about 1/4 of it, and we don’t carry extra dinners. I doubt more tears have ever been shed over a Knorr rice side. You would think that after almost 1,800 miles on the trail I would have a better respect for avoiding loss of food at all costs. But, the trail isn’t something you can organize like a desk drawer or get a perfect grade at like an exam. There are still many, many times when I feel like I have so much to learn.

We’ve spent a lot of time in the woods at this point. We’ve seen bears, a porcupine, countless chipmunks, squirrels, and newts. We’ve seen grouse and wild turkeys and all sorts of other birds. It’s so wonderful to see these animals in their natural habitat, and I’m glad that they are mostly afraid of humans, because it means they are still wild – the way they should be. So imagine my surprise when I was charged by a grouse. There I was, minding my own business, checking out a vista, when I turn to see a grouse hissing at me and charging with ruffled feathers. At first, I thought it was a badger and I freaked out. I yelled “WHAT IS IT WHAT IS IT” and stood frozen with fear (always a strong strategy). Thankfully, the grouse was just bluffing and veered slightly to one side while I quickly got out of there.

This is just a few days after I had another moment of blind panic thinking I was being charged by a bear. I was walking alone while Limbo walked ahead to the next shelter, when I started to hear what sounded like heavy footsteps behind me. The footsteps came closer, and I started to hear a huffing sound. This was not a hiker. In my mind, the only thing this could be was a bear. I decided I had to turn around to verify before I totally panicked, but my heart was already racing. So I turned around, and it was… a trail runner. It was a hot day and this guy was working hard, running up the incline with heavy footsteps and breathing heavily. With relief, I stepped slightly out of the way for him to pass and then proceeded to follow him down what I thought was the trail. The poor guy had to tell me I was going the wrong way, he was taking a different trail and the AT split off where he passed me. I had so much adrenaline going from the whole experience that I had to sit down and eat a snack.

Part of the reason Limbo and I decided to hike the Appalachian Trail instead of the PCT (which is geographically closer to our Oregon home) was because we actually wanted to be hiking around other people. We liked the idea of forming connections with both hikers and non-hikers we would meet along the way. The trail has made both of us much more adept at small talk and just walking up to someone to start a conversation. We’ve met some incredible people and have really enjoyed the social aspect. Recently, though, we’ve been around some small bubbles that have a personality in the group that I haven’t meshed well with. I’ve felt discouraged by how shallow some of the conversations have been, so I have started to withdraw from conversation at all. Limbo, on the other hand, is always friendly. He treats every conversation as an opportunity to hear something interesting. After one night of me retreating, he told me about a really pleasant conversation he had with a hiker I had purposely tried to avoid based on a bad first impression. I realized that I was sabotaging my own wish to connect with people on this journey because of my tendency to make snap judgments. I want to remember that everyone has a story to tell and I think in general, you can learn something from almost everyone if you listen well enough. I think being out here and meeting so many people had me taking this for granted, but I think I’m going to miss meeting so many new people when we are done with this hike. In daily life, it’s rare that you get to meet someone from a different state or even country and have a relaxed conversation with them.

I thought that hiking the trail would help me discover what I wanted to do with my life, both in the near term and long term. This hasn’t happened. As we get nearer to the end, post-trail plans are creeping into conversations both with other hikers and between Limbo and I. During these conversations, I tend to get that same panicky feeling I got when I thought a bear was following me. We’ve met lots of people who are going to grad school after the hike, some people just starting undergrad, many retired folks who get to do whatever they want after the trail, and some people who are just going back to their previous careers.  All I know at this point is that I just want to keep walking. The thought of this hike coming to an end is terrifying to me. I will admit, there are days when the “real world” sounds appealing. I miss wearing makeup and having clean hair and just not being smelly every day. Sometimes I miss the self-importance that comes along with a big project at work. On really rough days when my feet are killing me and I’ve got no energy on a long, steep, climb, I still wonder if I am cut out for being a thru-hiker. But mostly, I love that I get to walk every day. I’ve seen so many beautiful sights and experienced so much peace. My current plan is just to enjoy the heck out of the walk that I have left, and deal with the “real world” when it’s time. Maybe that’s not a very satisfying conclusion, but it’s the best I’ve got for now. 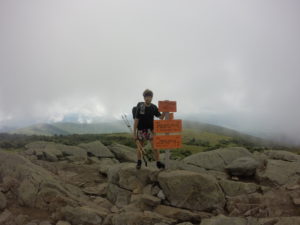 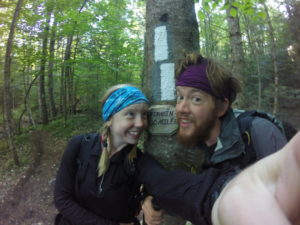 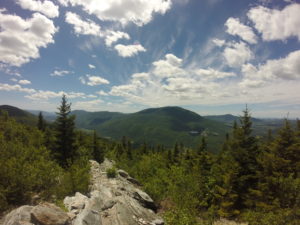 The beautiful view from Mt Baker in Vermont