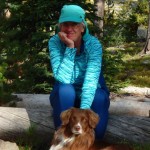 In anticipation of my 2018 hike of the Appalachian Trail, I went on two spectacular backpacking trips in July and September 2017.  The first in mid-July was on The Beaten Path in my adopted home state of Montana. The Beaten Path is a gorgeous, 28.- mile trek up and over the 10,000-foot Beartooth Plateau from Cooke City near the northeast entrance of Yellowstone National Park to Alpine, Mont., or what locals call the East Rosebud.

This was my third adventure on The Beaten Path and I was joined this time by my two college aged great nieces (they are indeed great but they are also my niece’s daughters) from Texas.  Erin, Mary-Katherine and I started in mid-July, which is very early for the over the top hiking season and I was worried that we would not be able to make it all the way across due to still heavy snowpack and high water crossings.  The most popular direction to do this hike is starting from the Cooke City side.  From that side, there are about eight uphill miles and the rest downhill.  But because I didn’t think we could make it over the top and I wanted my nieces to see the best lakes and waterfalls closer to the East Rosebud side, I decided to start from East Rosebud with a plan to return to my car at that same trailhead.

A benefit of hiking so early in the season was there were very few hikers on the trail.  The weather was good and on the second day we met two groups of hikers who had come over from the Cooke City side.  We asked about the conditions and they said that there was still a lot of snow but since a couple of groups had gotten through there were enough tracks in the snow that you could find your way across the highest part of the trail around Fossil Lake, which was still partially frozen.  My nieces are strong hikers and we decided to make a go of it.  The water crossings were higher than I’d ever seen and we did quite a bit of postholing across dense snowpacks plus we hiked through a couple of hailstorms up on top but we made it and the views are actually better starting from the East Rosebud side.  Of course, going that direction it’s 20 miles of up and eight miles down, but after all, I was in training for the Appalachian Trail so, of course, the hard direction was best.

I am a Texan who moved to Montana in 2004 and I'm living here happily ever after. I compete with my dogs in agility competitions and other dog sports. I also enjoy hiking and backpacking.