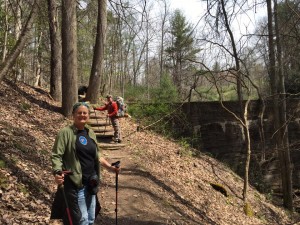 After a giant pancake breakfast my parents and I began hiking out of Hot Springs. My dad offered to carry my pack so I was “slack packing”.  It was nice walking with my family and we had views of the river, a pond, and a field.  At a road intersection about 5 miles in, my dad hitched a ride back to town to get the car and with a sad goodbye I walked back into the woods.  The last few miles were difficult for me and I was hurting but I saw a bunch of familiar friends that evening.
The injury
The next day started on a downhill and at the bottom I was in pain.  I sat beside the roadside at the gap and someone I pointed out the pain to told me I had a shin splint and I should get off the trail for a few days. This might of been one of my lowest moments.  I was limping and even crying at one point. I wanted to call my mom but I didn’t have service.  I got to the shelter and was relived there was a spot for me.  I started feeling better later when I saw my old friends Lizard, Tumbleweed, and Footlong now joined with Joker and Mountains Man by the fire (I’ll just call this group the terrible five, not because they’re terrible but to make things easier).
Party Zero
The next day it was raining.  I decided it would be a good day to stretch and take a day off to improve my leg since I was still in a lot of pain.  The Terrible 5, Goose, Skywalker, and Breezy (SoBo) decided to take zeros too at about noon when the rain still hadn’t subsided. At about 1 it finally did and we were able to find some dry wood (tent spots, dead trees) to start a fire.  We played music, some played hacky sack, some read, we stretched, and all hung out.  The sun even came out later and it was super chill.  A zero day in the woods came without all the stress that a town day has.  I would love to do another one if the opportunity presents itself. 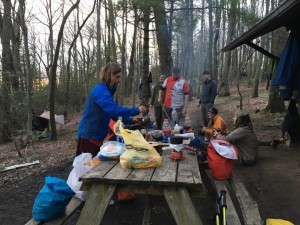 Rocky ridge
The next day had beautiful weather and my leg was feeling much better (still hurting but a huge improvement). There were views on some cliffs early on where I took a stop to stretch.  There was then a sign for a detour trail for bad weather.  The stretch ahead was “rocky and strenuous” according to the guide book.  It was exactly that but it was on an exposed ridge that eventually came to Howard’s Rock which had 360 degree views.  The rocky downhill really hurt my leg.  I got to the shelter and was thinking about heading on but the terrible five showed up and were staying.  So after a short day I decided to too. We had another fire together and a chill afternoon. 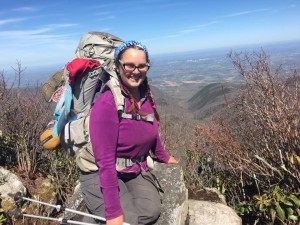 Hiker Paradise
The next day I left before the terrible five and headed up the mountain. By noon I found out I wasn’t making as much progress as I would of liked but heard a rumor of hot dogs being served at the next gap 3 miles away.  I walked a little faster hoping to get a late lunch.  When I finally got to the camp the folks ahead of me told me they had seen the trail magic being packed up. Bummed and tired I heard some people talking about resupplying at the new Hostel half a mile up the trail and half a mile off .  I decided to check it out and on the road there were some hard boiled eggs left out to eat.  The hostel was affordable and had a pretty nice resupply selection (lots of types of candy).  I decided to stay the night and some of the terrible five showed up as well.  I also met a girl named Blueberry Yum Yum who I split a spinach pizza with and the all of us got fresh cheeseburgers and PBRs!
Onions
The next day I hiked up from the gap to the shelter I planned to eat lunch at.  Almost right after my arrival the terrible 5 caught up and after lunch I was behind them.  I went underneath a highway and then was joined by section hiker Dave for a bit on the trail.  I caught up to him and the terrible 5 at a dirt road discussing thru hiking and collecting wild onions.  We all camped together that night a few miles south of Big Bald which I had caught a glimpse of that day.  I added some wild onions to my rice and it was tasty!
Big Bald 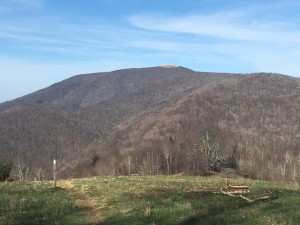 I was the second to leave the next morning after Dave. By mid-morning I was on top of Big Bald with 360 degree views and I felt like I was in the Sound of Music.  The downhill was tough on my leg.  I stopped for lunch and knew I was running late for my goal that day.   After running into three giant logs (the middle one I had help with from a man there) I decided maybe I should camp earlier on.  The man there was part of a church group and they were waiting for their last friend to make it down the mountain. They decided to camp right at the gap that we were at so I joined them.  They made a fire and soon were offering me food.  It was good company and I got mostly resupplied from them! 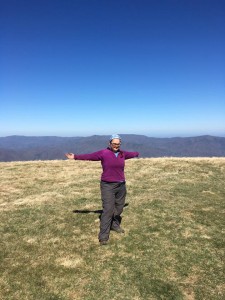 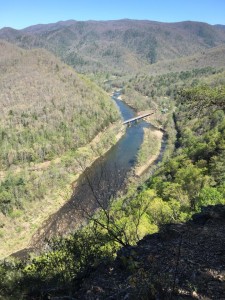 The next day I only had one uphill before a long downhill into Erwin.  My shin splint was getting better but the long downhill had me going very slow and stopping frequently.  On the way down there were views of the river and the town of Erwin.  I got to the road and Uncle Johnny’s Hostel was visible right off of it.  I got there with enough time to set up my tent and then I caught the dinner shuttle at 530.  The dinner shuttle drops you off near a Walmart, Italian place, liquor store, and Mexican place.  I went for Mexican and after two margaritas shopped at Wallmart.  They came and picked us up 2 hours later and then I was back at Uncle Johnny’s and ready for a day or more to relax and recover.
< Previous Post
Next Post >