I slept surprisingly well inside the pavilion, and was ready to hit the trail by 7. I followed the trail to the edge of town and re entered the woods where a steep and rocky climb back up above 1,000 feet was waiting for me. The ridge hiking after the climb was flat and smooth and quite enjoyable, despite the high temps. It was yet another hot and humid day, the fourth day in a row of the heat wave.

The smooth, easy terrain was short lived and the rocks soon re-appeared. The trail soon became completely covered with boulders, leading to a steep climb up to Pulpit Rock. While providing excellent views of the farmland down below, I couldn’t hang out on the exposed rocks for too long in the heat and continued on through the boulder fields.

The terrain changed from large boulder fields to a trail  covered with small but jagged rocks, which hurt and irritated me a lot more than the boulder-hopping. Thankfully these rocks slowly dissipated, and the trail widely opened up for a long descent down to Hawk Mountain Road.

The rocks returned with a vengeance on a tougher climb up Dan’s Pulpit. A few miles away was Allenville Shelter, and I arrived and set up my tent immediately before an intense thunderstorm hit. I enjoyed the lighting show under the roof of the shelter with a few other hikers, as a couple hikers unfortunately rolled in too late and were already soaked to the bone. 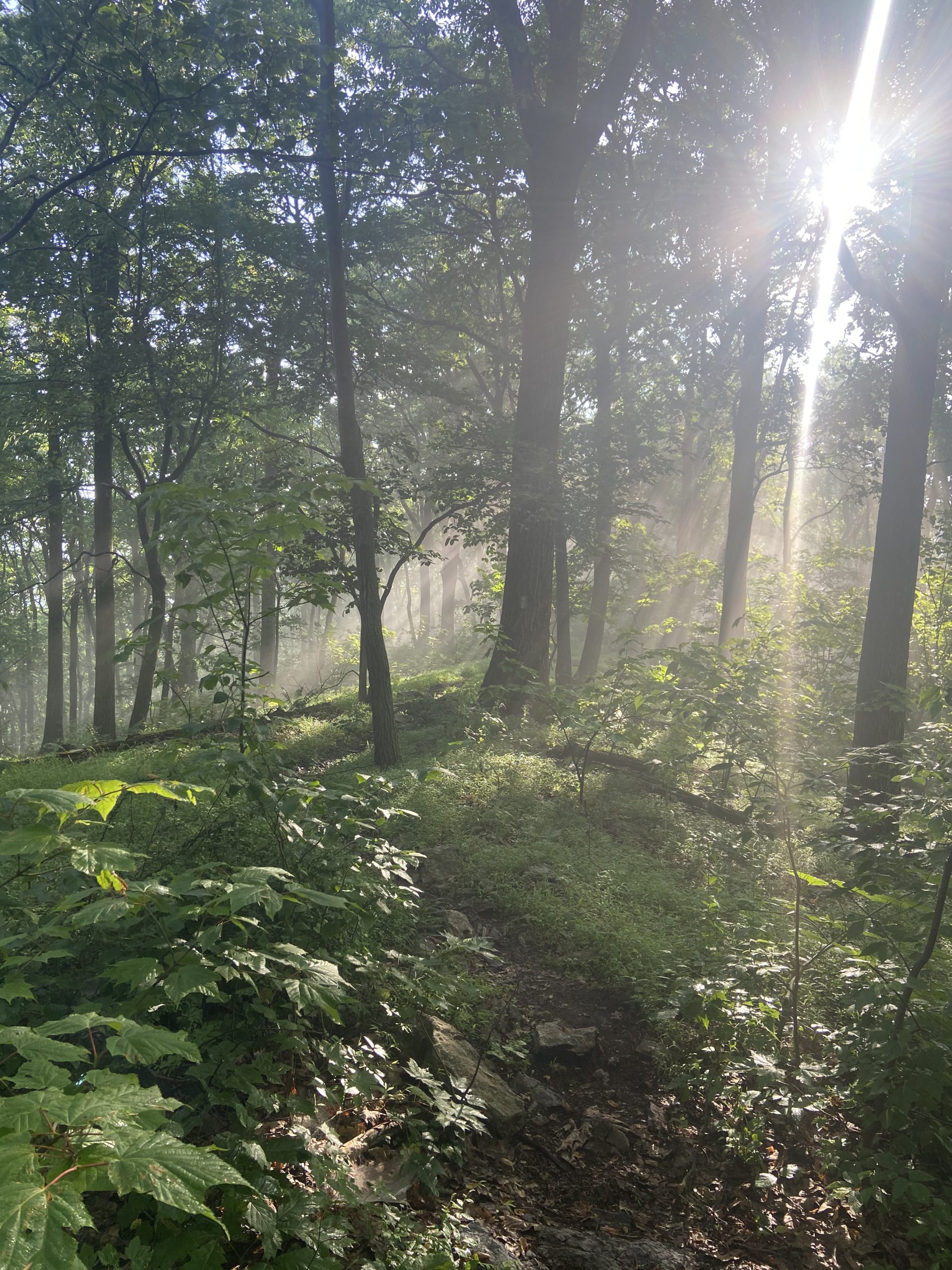 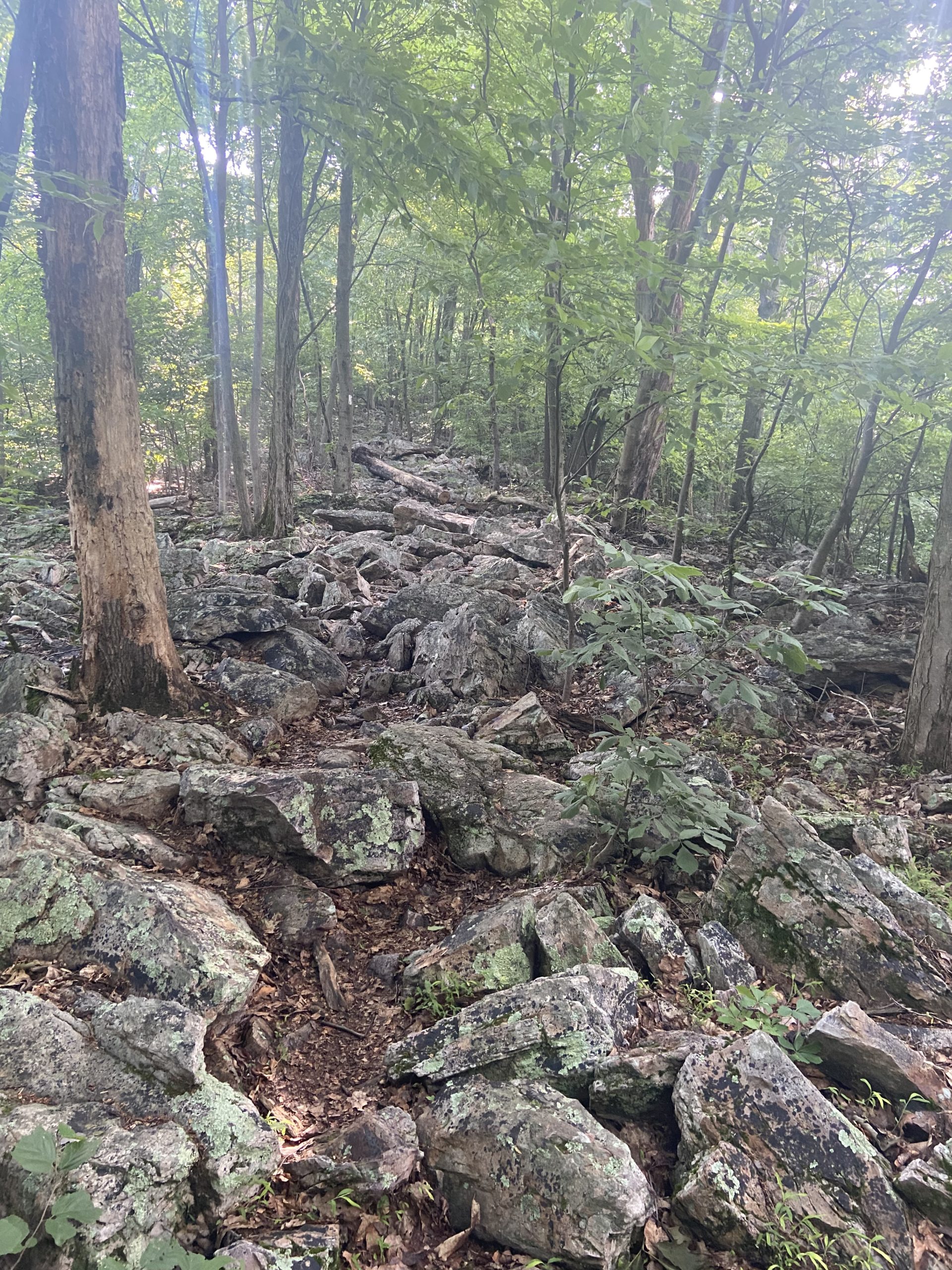 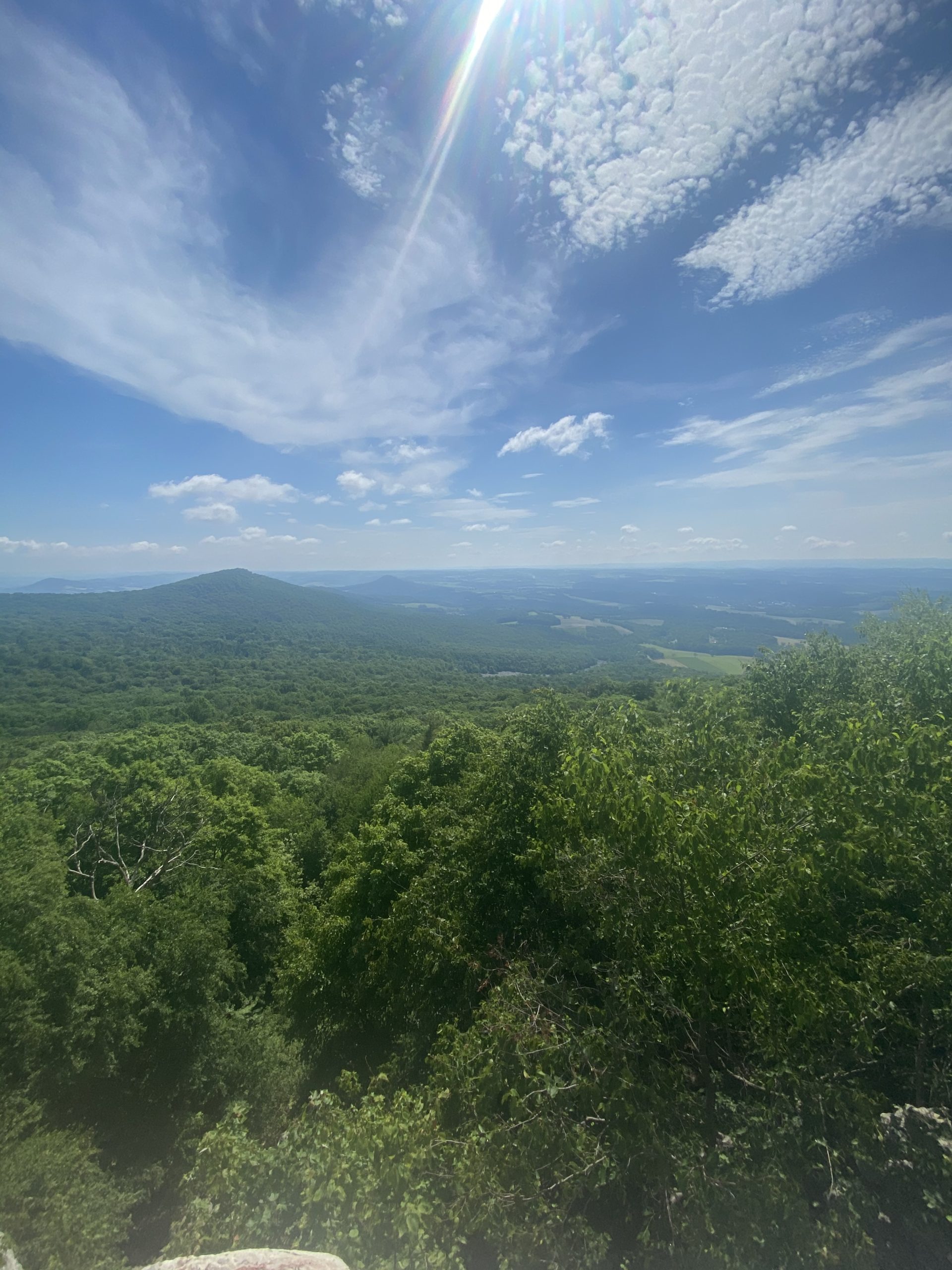 The rain stopped early than night and I was ready to hit the trail early at 6:45 to get to Palmerton as early as I could. I was the only one leaving early except Mr Rogers, who was also staying in town that night. He left the trail right after I did and we would wind up leap-frogging each other on trail throughout the hike.

I expected the rocks to continue on the ridge to start my day, but to my surprise the first 7 miles were mostly rock free, on an open dirt road instead of trail. It was to be much cooler today; thankfully the worst of the heat wave was behind me. The boulders soon appeared resulting in long stretches of boulder hopping.

The entire day went back and forth between stretches of rocky trail, to smooth, then rocky again, and so on. I reached the rocky outcrop of Bake Oven Knob, where I got some great views. The majority of the rocks at the overlook contained graffiti painted on them, a common theme throughout Pennsylvania. More rocky and uneventful miles led to the short but steep descent down to the Lehigh River, arriving just after 1:30. I crossed the bridge and hitched a quick ride into town, where I enjoyed the rest of the afternoon and night in the AC hanging with Mr Rogers and a few other hikers. 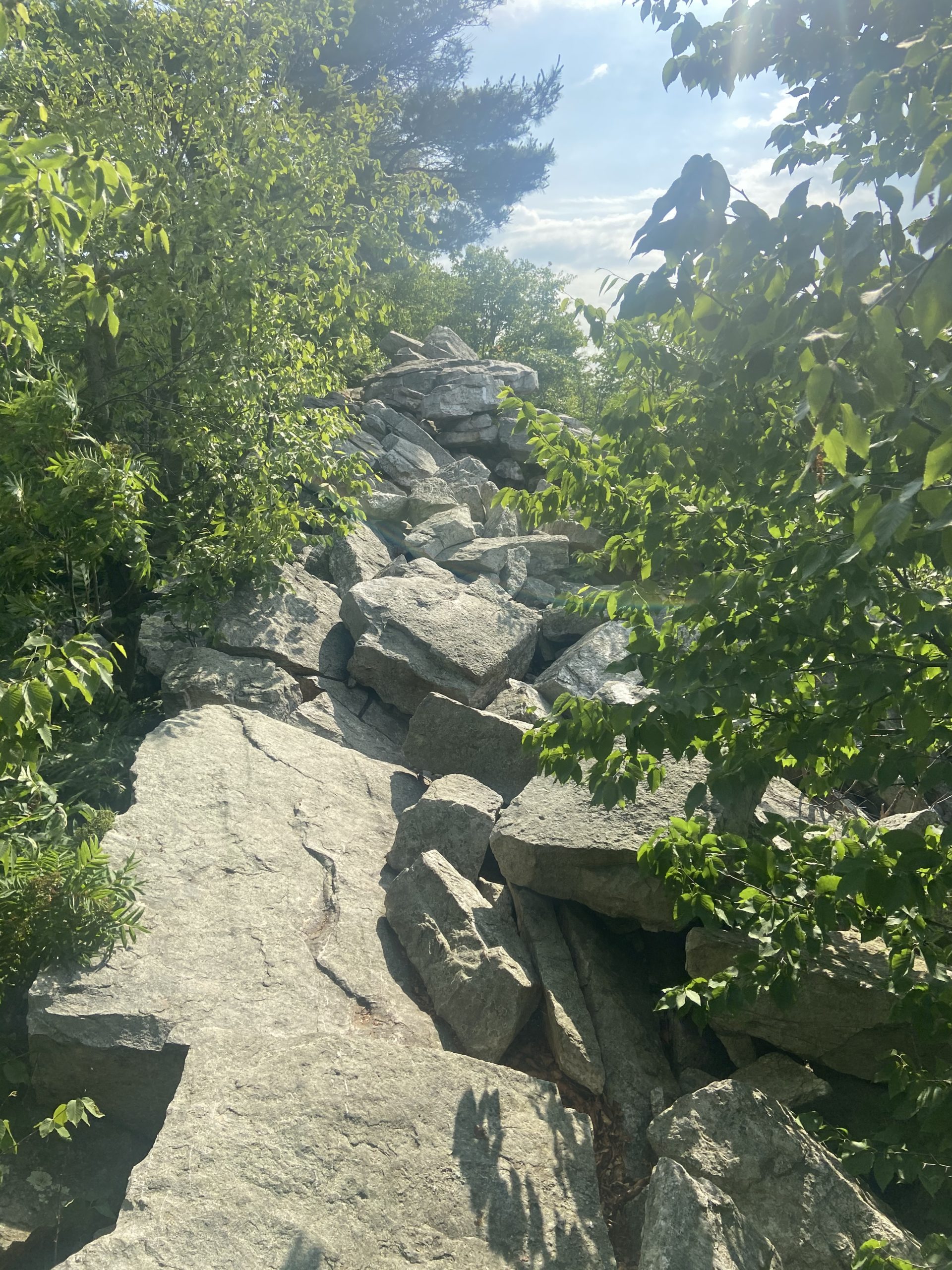 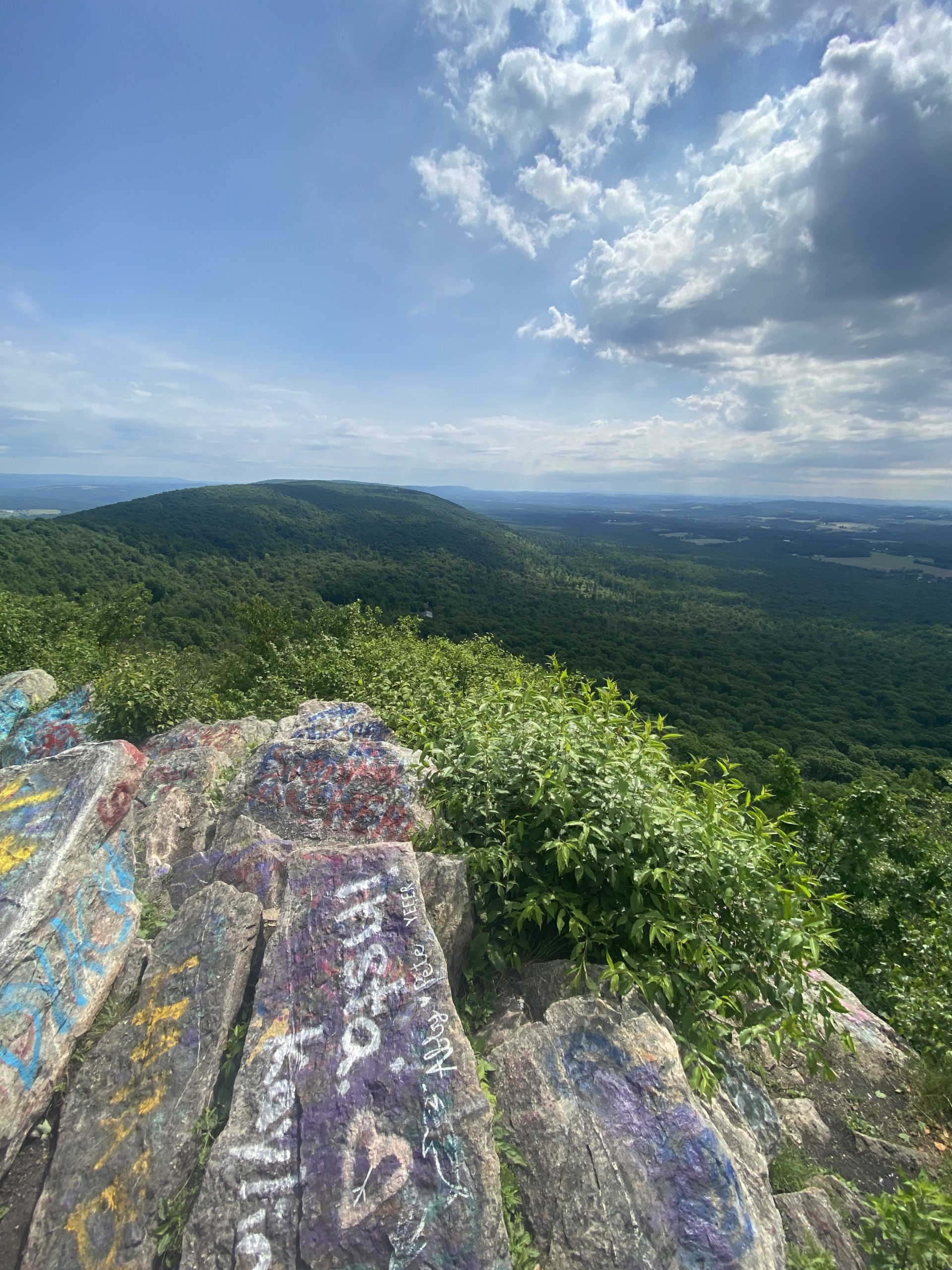 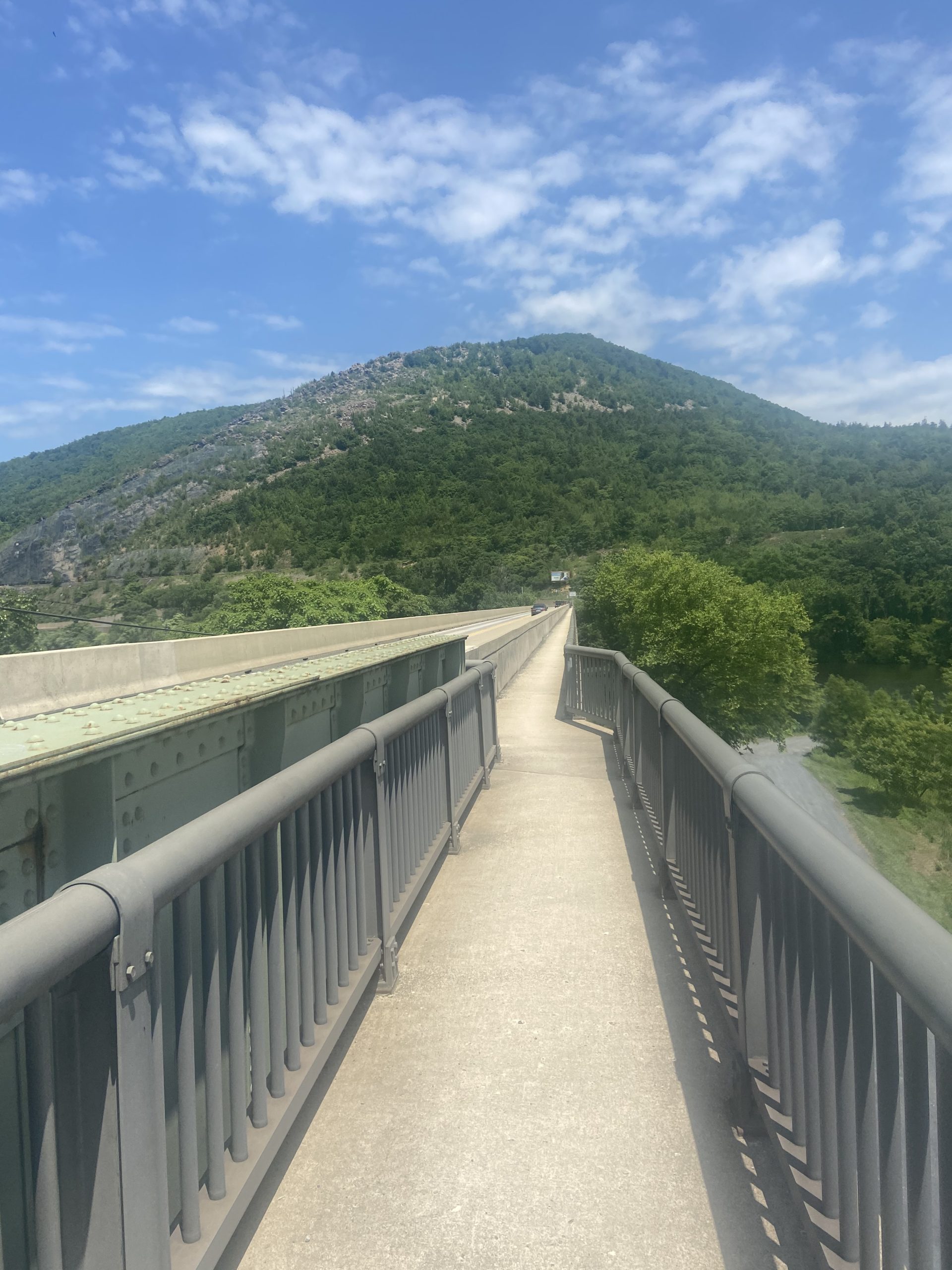 Mr Rogers and I were able to get a ride back to the bridge at 7:45 from Tracy the hostel owner. We knew we had a pretty big climb coming out of town; it was all almost everyone talked about at the shelter the other night. Our hopes were to complete the rock scramble before the rain came down. We pushed our way closer to the top and climbed up and over many boulders to reach the summit of Blue Ridge Mountain; throughout the whole climb the Lehigh River and the bridge we crossed came into view far down below.

The rock scramble was very fun for me and thankfully we beat the rain, and a slight drizzle started coming down during a flat and smooth ridge walk for a few miles. The scenery of the day basically remained the same the entire day and started to be come monotonous, but me and Mr Rogers would chat throughout which made the miles seem to go by quicker. By lunchtime, the rain really started coming down and the rocks became more and more apparent on trail.

20 rocky and flat miles later we arrived at Wind Gap, where I was meeting my friend Jason from home who was going to join for two nights. While I waited, Mr Rogers went ahead to scope out and secure a stealth site for us down trail. Jason arrived at 5:30 and we climbed up the ridge and hiked for another couple miles before finding Mr Rogers with his tent set up in a cozy site close to the trail. We hung out and ate our dinners as the rain started to fall once again, then retreated to our tents to get out of the rain. Listening to the rain fall on my rain fly of my tent will never get old. 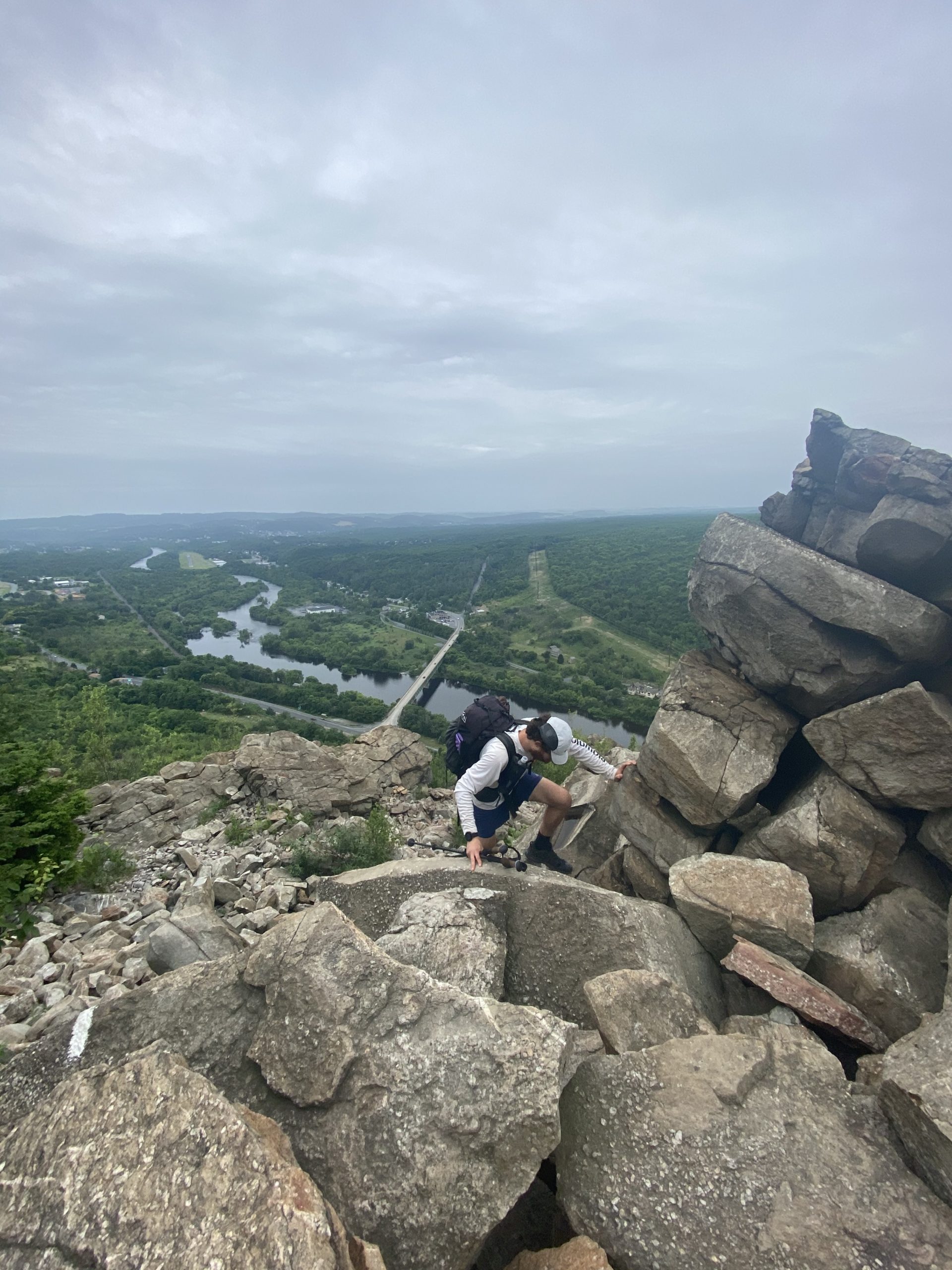 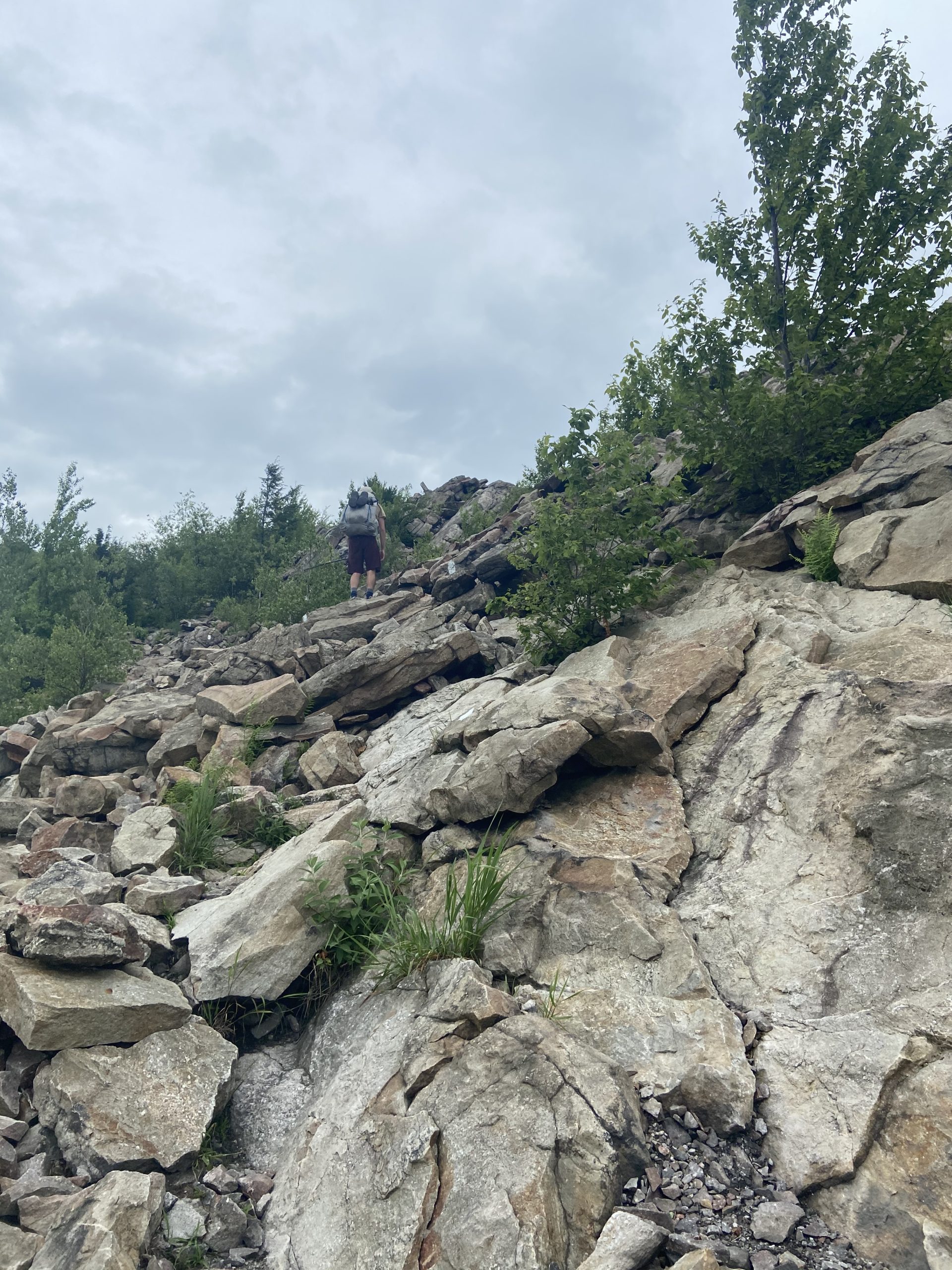 The rain stopped in the middle of the night, and we were on trail by 7:45 ready to finish up the last 13 miles of Pennsylvania. Deleware Water Gap was our destination, which is where the AT crosses into New Jersey.

Other than a brief rock scramble and a boulder field at Wolf Rocks, the majority of the trail this day was flat on the ridge, and the rocks were kept to a minimum. Pennsylvania is surely rockier than the other states, and the rocks definitely proved to be frustrating at times. It was thrilling to enter New Jersey; the Northeast Region seemed impossibly far away back in Georgia.

We descended steeply down into the town of Deleware Water Gap. We celebrated in town with a couple drinks and lunch, then crossed the Deleware River, officially walking into New Jersey. The mandatory photos at the border sign were taken, then we headed into the woods to climb up Kittatinny Ridge.

The climb was manageable and the rocks still stuck around, but we quickly found ourselves at Backpackers Camp, a very large and open official campsite which turned out to be a very popular site for weekend hikers. Despite the crowd we had a great site and enjoyed a great sunset right from the site. This was one of the more fun days on trail I’ve had in a couple weeks, and it felt good to have very high morale again. This was also the first day that Mr Rogers and I hadn’t seen another thru-hiker who started in Georgia all day.

Between the humidity, heat and rockier terrain, I felt a mental slump coming on in the stretch between Duncannon and Port Clinton, and a little bit past that too. I knew I just had to keep grinding away and I’d eventually get to where I wanted to be. Mental fatigue can definitely happen on a thru-hike; but if you stay goal-oriented, celebrate the small victories, and enjoy the little things, you’ll find yourself back on track mentally. My spirits were not only rejuvenated; I was ecstatic to have made such progress overall and proud of myself for gritting out Pennsylvania and coming out the other end stronger. 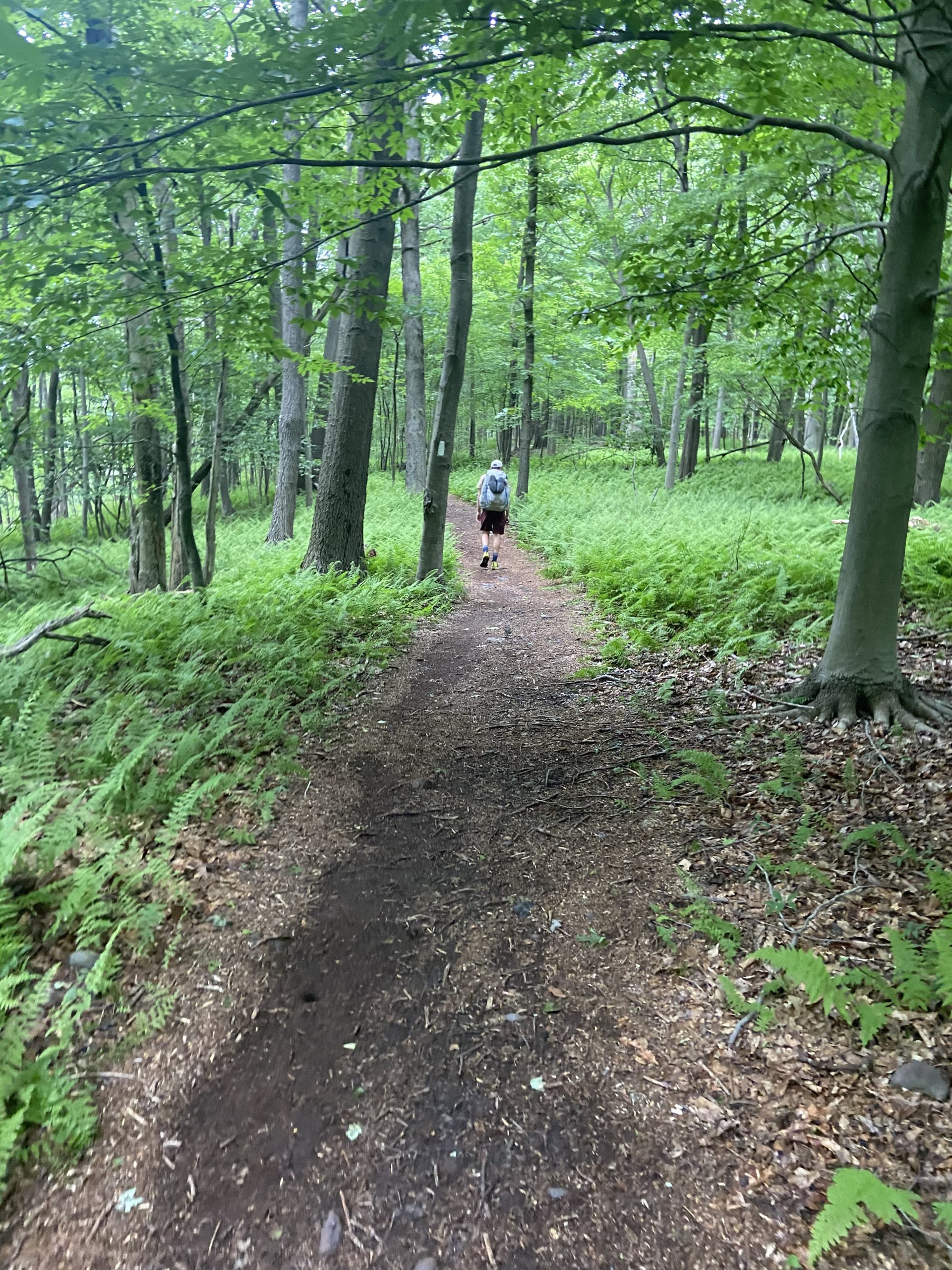 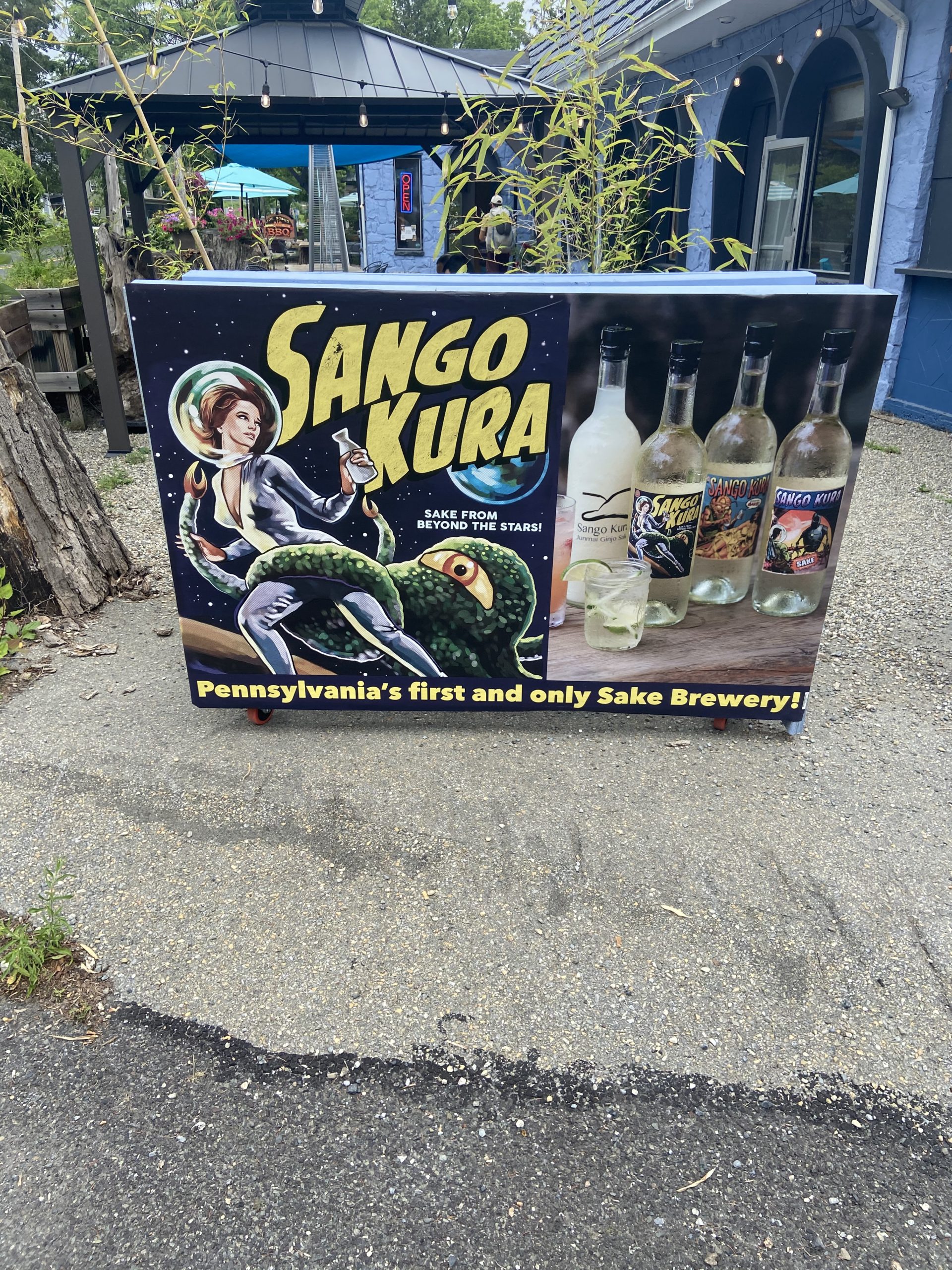 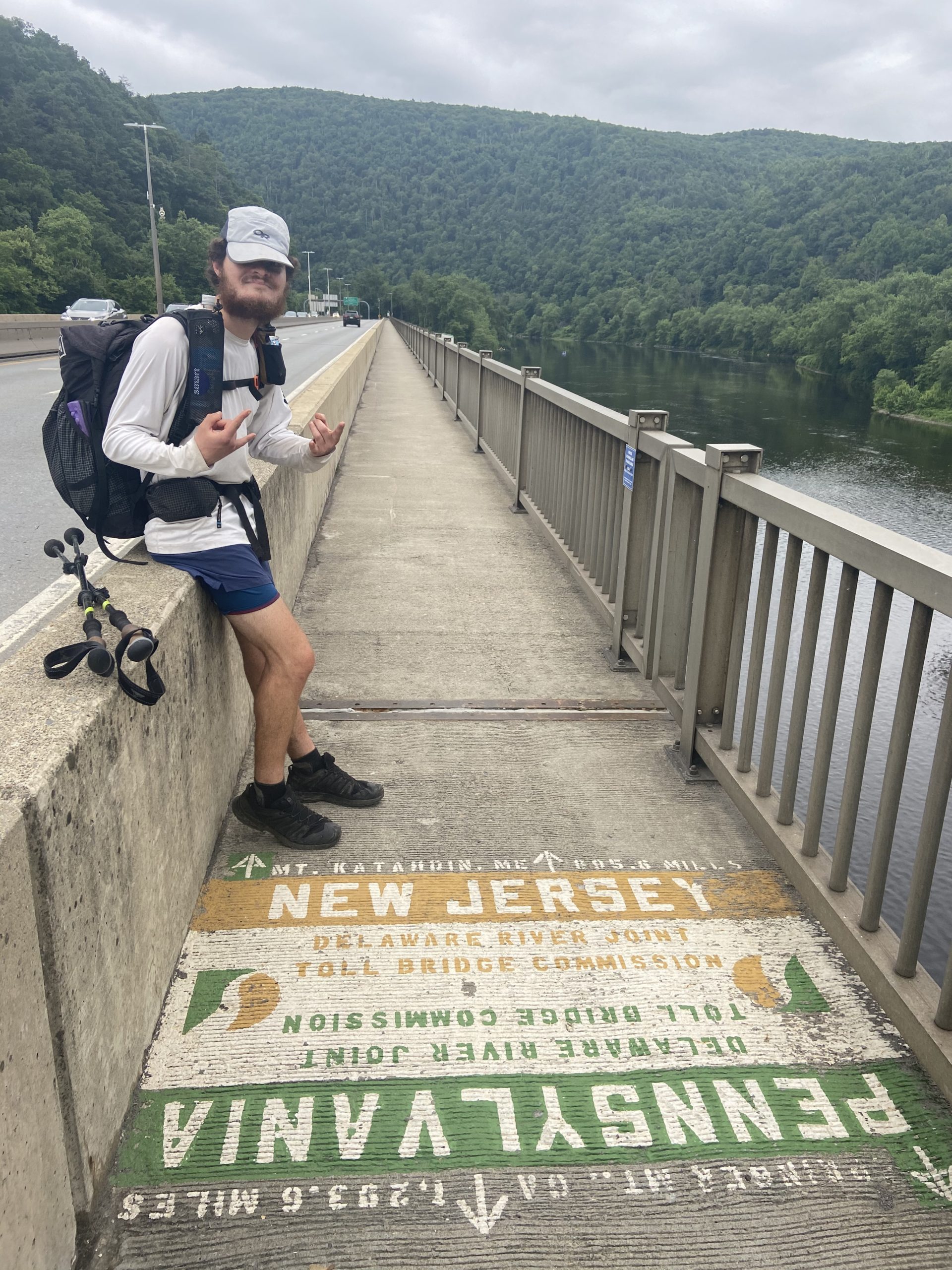 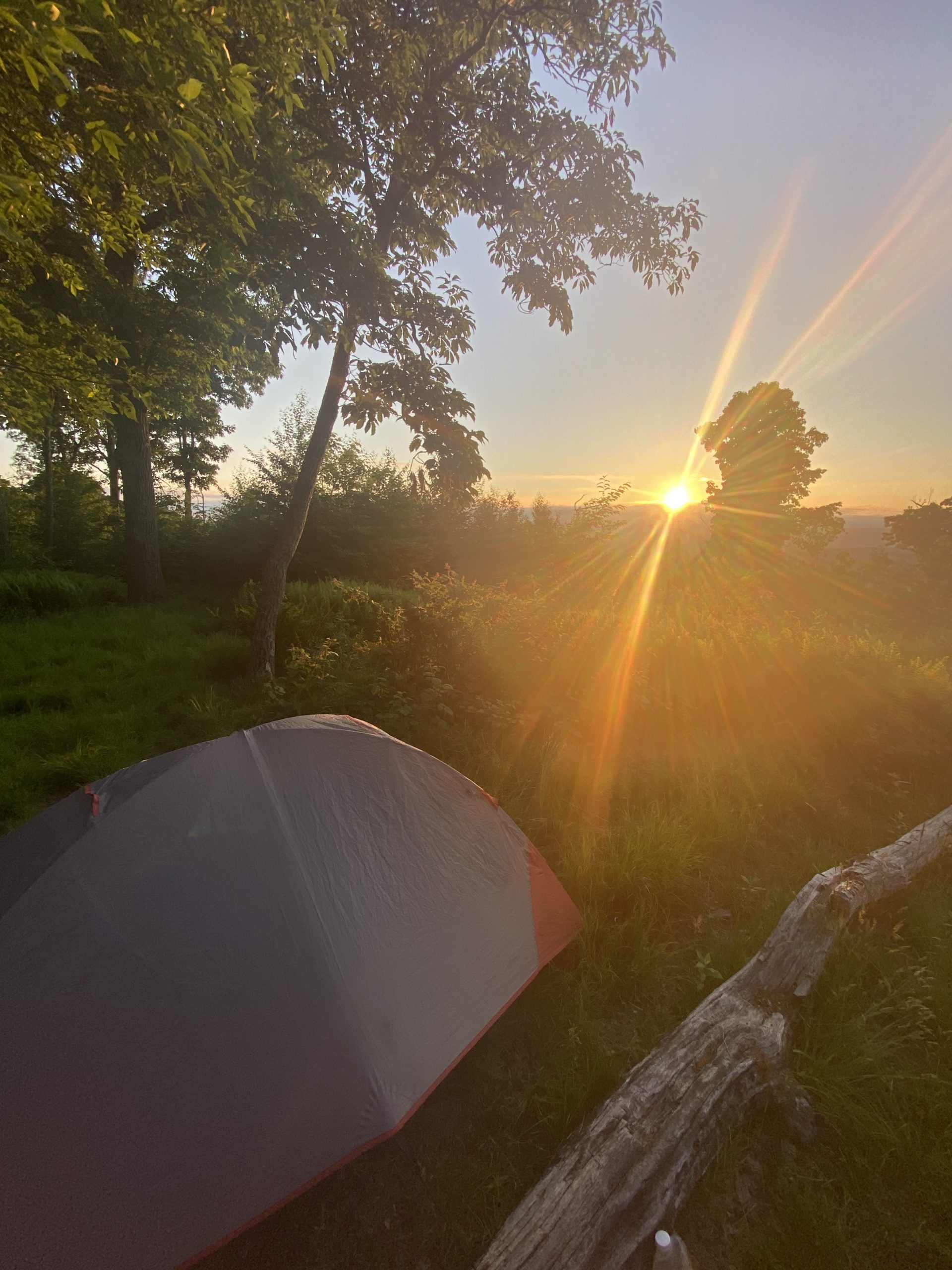