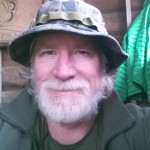 How Backpacking Gear Has Changed Through the Decades

If you’re planning on hitting the trail this year, you’re most likely fretting and constantly editing your pack list.  You put things in, you take things out.  You look at them and turn them all about.

Trying to get your base weight as low as possible is certainly one ingredient for a successful hike. You can hike longer, put less stress on your body, and hopefully lessen your chance of injury. But have you ever thought of what the successful hikers of yesteryear had in their pack? I’ve taken a look back into the past and gathered old pack lists from books and my hiking friends who hiked 10, 20, or 30-plus years ago.

Let’s take a look into their packs. 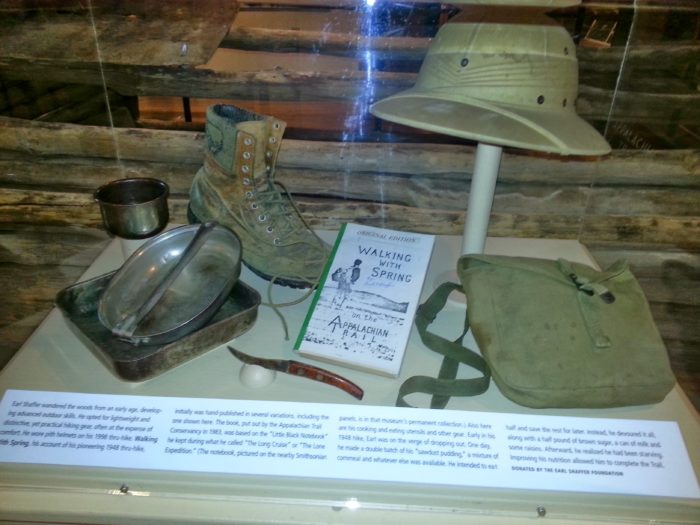 When Earl Shaffer walked up Mt. Oglethorpe back in 1948, beginning what would become know as “The Long Cruise” and first thru-hike, he was carrying the following gear in his Mountain Troop ruck sack:

The tent was the only item that he removed during his hike. 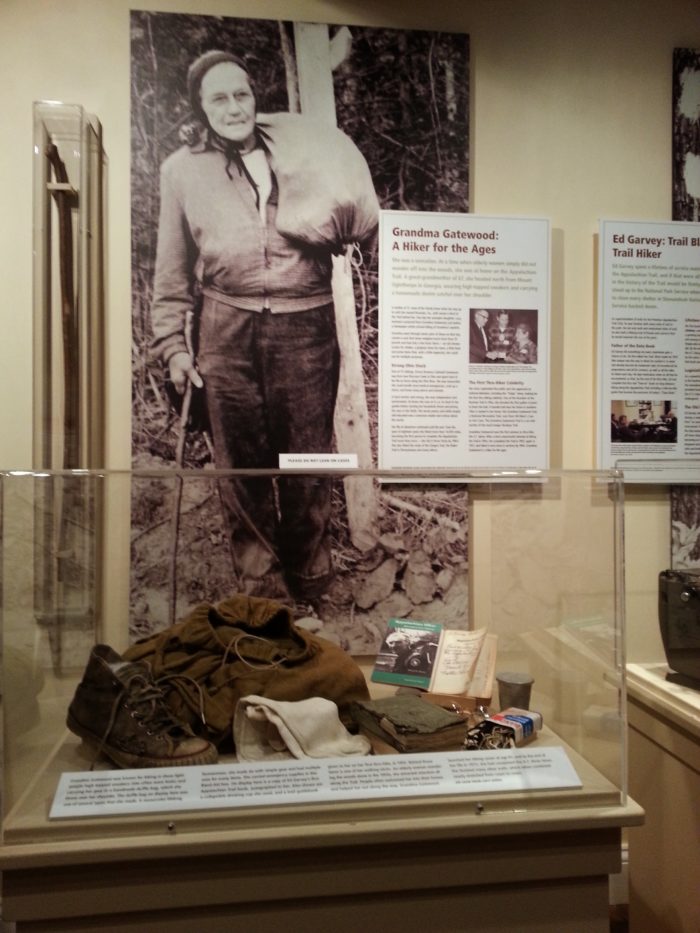 Grandma Gatewood may be considered one of the first lightweight backpackers.  Her gear list was spartan to put it mildly.  First of all, she didn’t have a backpack.  Her main pack was a denim bag that she had sewn herself, carried over her shoulder.  Inside was a cup, blanket, raincoat, and extra clothes.  For a shelter, she used a shower curtain. Her gear weighed in at about 12 lbs and her signature Keds sneakers were her trademark in a world where most hikers still used heavy hiking boots. 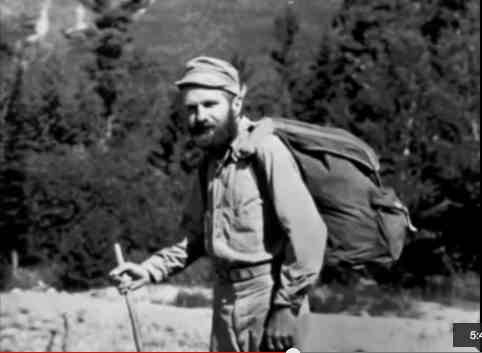 Gene Epsy was the second person to thru-hike, and he carried something unique. Instead of a flashlight, he used a miner’s carbide lamp which uses a chemical reaction of calcium carbide pellets and water. 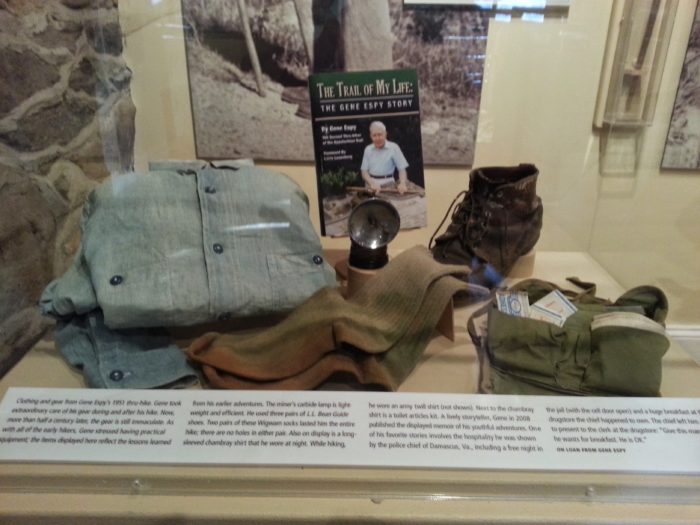 Gene’s pack weighed in at around 50 lbs and included the following items:

Peregrine, the author of THRU: An Appalachian Trail Love Story, SOBO thru-hiked in 1973.  Although he no longer had an actual pack list sitting around, he did have this to say about some of his gear.

“First my boots— an old pair of Dunhams with the thick lugged soles and massive leather uppers popular in the early 70s — are on display at the AT Museum. My pack is on display on the lobby wall of the Len Foote Hike Inn. The pack is an old Trailwise, the kind recommended by Colin Fletcher in the original edition of The Complete Walker. I must admit that if you have items from your personal past on display as museum relics, then you are officially qualified to call yourself a card carrying fossil. I do so proudly.
Other items of interest on my list would include: A 1.5-inch Swiss Army knife. An old mesh onion sack that I used for a food bag (obviously, my finances were limited). A nylon parka purchased at a Zayre’s discount store. An old Boy Scout poncho. A brass SVEA 123 stove. An aluminum fuel bottle to carry Amoco premium lead free “white gas” which at that time was the only lead-free gasoline on the market.” 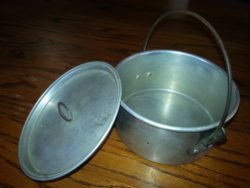 My most prized possession of the hike was this mess kit. My Dad was an Eagle Scout, as are I and my son Dan. Dad bought a Boy Scout mess kit in 1928, and it made the whole trip with me in 1973 from Maine to Georgia. It is a tiny one-quart-capacity pot made of steel. It was just barely enough to cook rice or noodles on. I spent many a lonely dinner listening to the sibilant hiss of my SVEA 123 waiting for it to boil up my meager meals in that little pot. The pot will hit 90 years of age next year which probably makes it one of the oldest truly functioning items ever carried on an AT thru-hike.”

Gonzo hiked the trail in 1983.  His detailed journal and photos can be found at 2000milehike.com.  Gonzo’s hike is also commemorated at the AT Museum. The 1983 exhibit contains some of his gear and several stories from the hikers of that year that they fondly referred to as AT Three.

Below is his pack list (with a few weights) that he had written on the inside cover of his log book. 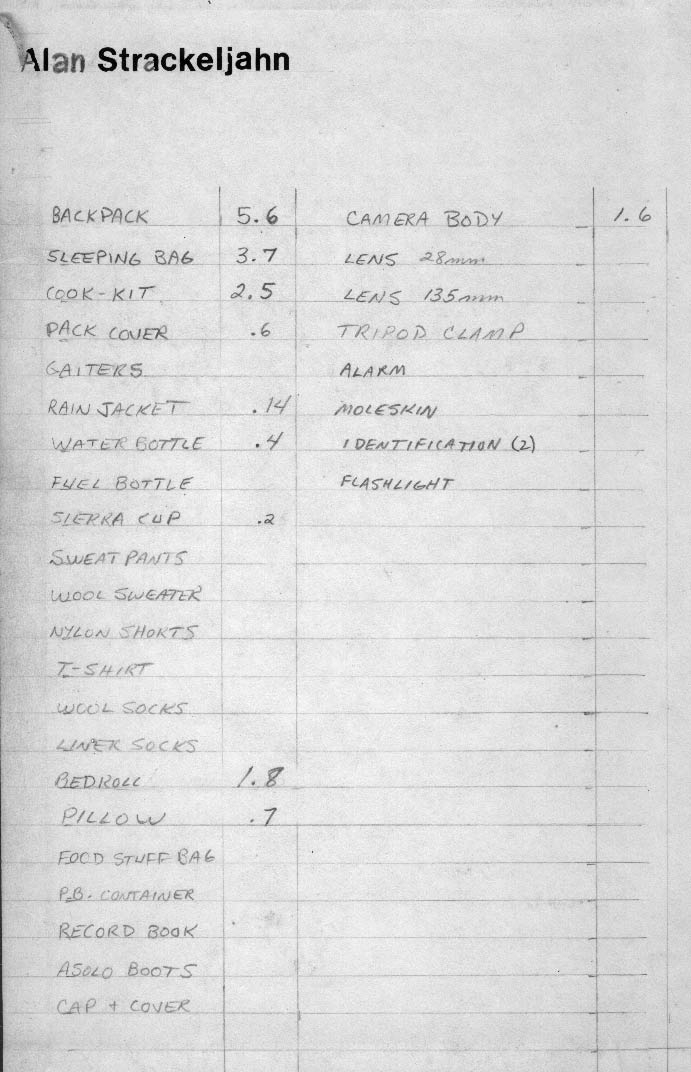 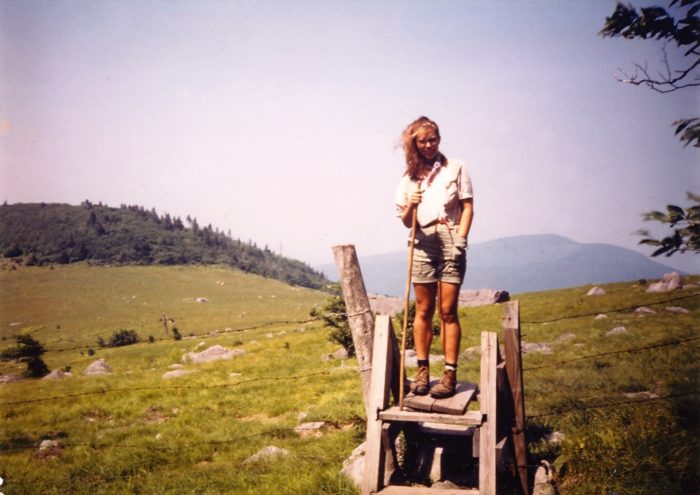 Mountain Laurel started her hike in late April of 1987.  She admits that her gear choices were not typical for the day. Her starting weight was 33 lbs, which she described as practically ultra-light for the 1980s.  Laurie did a lot of research and preparation before her hike. Below is her pack list and comments on some of her choices. 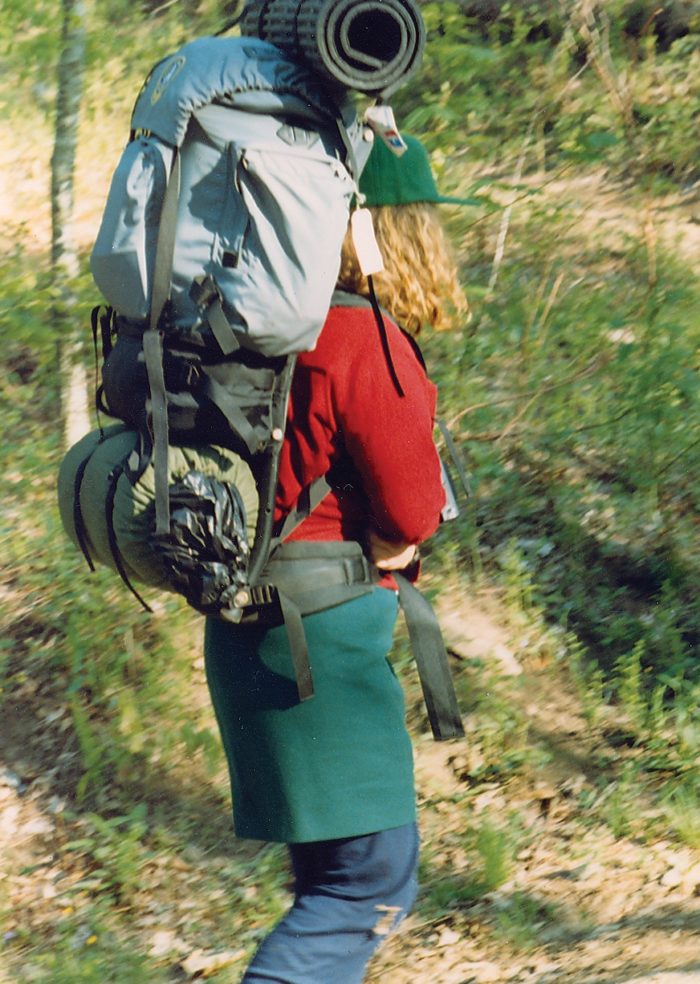 I couldn’t find an actual pack list in J. R. “Model T” Tate’s Walkin’ on the Happy Side of Misery, but he proudly mentions that his pack weight was 52 lbs when he lifted it up onto the Truth Teller at Amicalola Falls State Park.  His confidence was compared to two other hikers who weighed their packs after him.  He called them eighty-six and seventy-eight.  As he passed them on the approach trail, he saw them sorting through their packs, discarding items left and right… and he never saw them again. 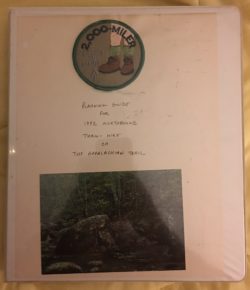 Sprained Rice was already a 2000-miler when he did his 1992 thru-hike, so the list he provided had a good bit of experience behind it. As I look at the photos he sent me of his Hiking Binder, I could tell that a lot of thought and planning had been put into this hike. His pack list reflects the decisions he made to cut certain items that still happens today. Bill reported that his pack weight was a respectable winter weight of 35 lbs. 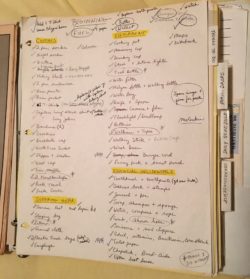 Early Bird sent me his list from memory.  Even though it has been ten years since his thru-hike, he can still remember everything he carried on his epic adventure.

So as each of us fusses over the two-ounce difference from one brand to the next, I wonder if maybe we are fretting a little too much.  As you can see above, these successful hikers, had a pack weight that today, is considered heavy.  They made it despite the weight of their pack.  I’m not advocating a heavy pack.  I think it is a good idea to try and lessen the load you carry.  It can only help as long as you aren’t trying to go stupid light and leave behind what I consider important survival items.  That is up to you.
I have personally stopped worrying about my pack weight.  I still hold everything up to scrutiny before considering bringing it along, but I know that this process will probably never end.  Your pack contents should be fine tuned all along the trail.  The changing seasons will bring different needs; be flexible and willing to change things as your hike progresses.
I’ll see you out there.
Peace,
EarthTone
Photo Sources:
Earl Shaffer’s equipment – A.T. Museum
Grandma Gatewoods stuff – A.T. Museum
Gene Espy historical photo – A.T. Museum (from the archive)
Gene Espy gear – A.T. Museum
Cookpot – Richard Judy
Alan Strackeljahn’s list – Alan Strackeljahn from his website 2000milehike.com
All photos of Laurie Potteiger, including feature image – Laurie Potteiger
Bill O’Brien’s binder and list – Bill O’Brien
< Previous Post