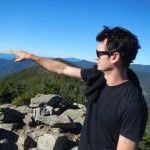 Close Encounters Of The Ursine Kind

It was a whisper-quiet friday in July, overcast and moonless, and I had just wandered off trail to pitch my tent after night-hiking alone about 6 miles into New Hampshire’s Pemigewasset Wilderness. It was 12:30AM, I was dead tired, and I had the entire contents of my pack spread before me, visible only in 6-inch patches of headlamp light. It was so dark I felt like a scuba diver investigating a deep sea wreck as I placed my sleeping pad and quilt in the tent. When I pulled my head back out to zero in on the cord I’d use to hang up my food, I heard the bear’s first deep huff about 80 yards off in the distance.

That’s not a large mammal, its just my imagination.

My default reassurance, reserved for all odd noises in the woods when I’m alone. No sooner had this thought flashed through it’s well-worn neural pathways than did the cold realization that I was hearing it again: A deep, guttural HUFF! Almost like the sound of a large dog barking, but too deep to have a discernible pitch, too low and loud to come from any canine save maybe for Clifford, star of that ridiculously premised children’s book series.

I snapped into crisis management mode (to be fair, seeing a black bear while you’re walking down a trail in daylight is not a crisis at all, it’s a blessing. They are incredible animals and to see one out in the back-country, truly wild and free, is one the of the most powerful experiences you could hope to have while out hiking). However, I couldn’t see worth a damn, was about 40% finished setting up camp, and had a stuff sack full of delicious smelly food sitting on the ground next to me. I froze, listened for about 15 seconds, and heard it again. I decided it must be sitting still, or I’d have heard it moving through the underbrush. I slowly pulled the last corner of my rain fly snug. Then another deep huff, noticeably closer.

I’m not hearing it moving because it’s moving down the trail. Towards me.

This realization clicked me from Crisis Management mode straight to Complete Freakout. I haphazardly shoved everything in sight into my backpack, cinched and buckled it down tight, and lifted it by the sides of its internal frame tight to my chest. Hopping and tripping my way back onto the trail, I turned and marched swiftly about 15 yards in the opposite direction of my tent and the bear, and dispatched my poor Osprey 30 feet down a steep embankment into an underbrush-filled gully, hoping for the best. Did I hang up my food? Nope. That ship had already sailed by the time I was simultaneously willing the first bear sound out of existence and trying to remember the name of Clifford’s human friend (Emily Elizabeth, for what it’s worth).

I turned and power-walked back up trail towards my tent, breathing in tiny gulps and feeling my heart bounce off of my eardrums. I paused in silence once before leaving the trail, and again when I stopped crushing through underbrush and arrived at my tent. I heard the bear vocalize again each time. With trekking poles shortened to close range face-jabbing length and tucked under one arm, I cleared my throat as loud as humanly possible, cupped my hands slightly, and smashed them together in a quick succession of five claps that practically resembled gunshots in the silent woods. I then promptly jumped inside my tent and waited in silence, tensed like a gymnast at the bars, listening as the sounds of the bear’s voice and eventually even footsteps approached. 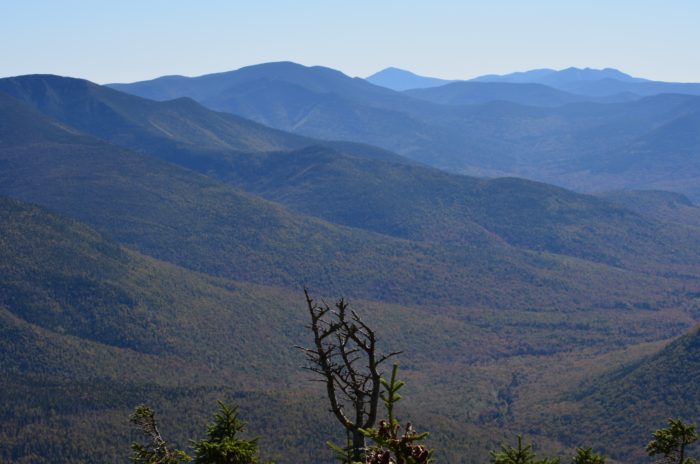 I’ve had two bear encounters this past summer while out hiking solo, and ironically in both cases I did not actually lay eyes on the animal, but knew beyond reasonable doubt that they were bears. The first encounter I had came while on a day hike to one of the most remote and infamous of the White Mountains’ 4,000 foot peaks – the wooded, view-less summit of Owl’s Head. An eighteen mile out-and-back day meant I wanted to start good and early. I hit the trail at 6AM and hadn’t seen any other hikers since leaving the parking lot. It was a muggy morning and I had made the bold decision to leave my bug spray in the car, so needless to say I was not taking breaks but essentially fleeing from mosquitoes the entire day (it made for a good workout and I totally crushed my anticipated time for the hike).

I was rummaging through my backpack while still walking, looking for a granola bar when I heard a quick snort followed by the sounds of something large running through the underbrush just ahead and off to my right. I know it was a bear because I heard the tell tale “whooshing” sound that black bears make when they climb trees rapidly. About five paces ahead from where I heard the sound, I saw the claw marks that showed where the bear ran a few steps up trail and then what looked a lot like a bicycle skid mark where it had left the trail. I stood still and silent for a minute or two, scanning the forest to try to see it, but the mosquitoes moved me along before I could. 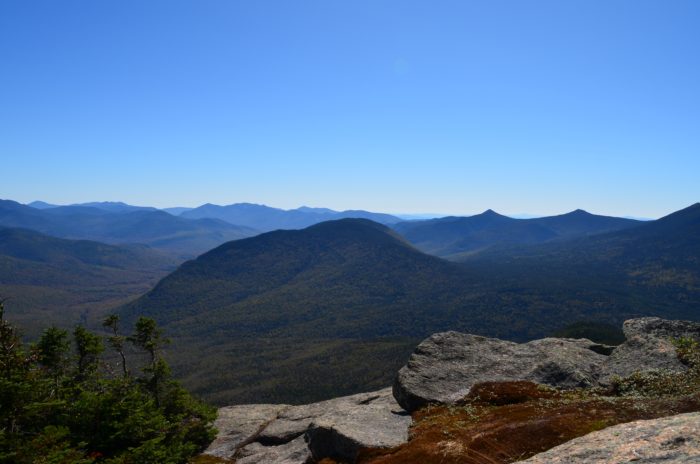 Not all bear encounters are so harrowing. The majority of black bears I’ve seen have been from the safety of cars, in campgrounds. Sadly, that’s probably your best opportunity to see one, because they are not stupid and learn pretty quickly that campgrounds are an easy food source. My very first sighting was as a seven year old kid camping near New Hampshire’s fabled Kancamagus Highway with my parents and sister. A mostly grown adolescent wandered through ours and several other sites after dark, causing considerable commotion, and the following morning we watched from our car as a pair of Rangers trapped it in a dumpster and tranquilized it. We later found out that the campground’s manager had been feeding it, a move that hits the trifecta of ignorant, reckless, and illegal.

Black bears are timid, and generally if you see one on the trail it will leave the area. Although that wasn’t my experience that night in the Pemi. That bear circled my general area for the following 2 hours, snorting, huffing, basically doing what I assume was his/her’s best bear impersonation of Clint Eastwood’s “Get off my lawn” moment in Gran Torino. The bear was distressed, I was distressed, and at first light I decided that the 45 or so minutes of actual sleep I achieved wasn’t likely to get me through the long hiking day I had planned. I cautiously packed up camp, hiked back out to my car, and took the long way home after a stop for bacon and eggs.

Was I rattled? You bet. Did it make me more afraid of bears or question my ability or desire to thru-hike next year? Nah. I know I’ll be seeing black bears on the Appalachian Trail, and I’ll be disappointed if I don’t. That doesn’t mean I want to encounter them while I’m sleeping though, and that’s why I hang my food up or use bear boxes when available, and I never cook or eat inside tents. A little bit of respect and precaution goes a long way. And if you are fortunate enough to have a non-confrontational encounter with a wild black bear, it will likely become one of your most treasured hiking memories.

I did manage to see some bears up close and in person this year, but it was not on a trail, it was from the back deck of the Mount Washington Hotel (fantastic trail-cation spot if you happen across clean clothes and several hundred extra dollars in the Whites on your thru-hike), where I was drinking beer with my uncle and enjoying that particular deck’s incredible view of the Presidential Range. A sow and her two cubs had meandered through the golf course and right up to the edge of the hotel, sniffing around the lawn near where the kitchen’s large dumpster was parked. Despite feeling pretty concerned about their apparent comfort around the hotel and crowded deck, I was at least happy to snap a few quick shots of them on my phone. After the two other encounters I’d had this year at that point, I kind of felt like I earned it. 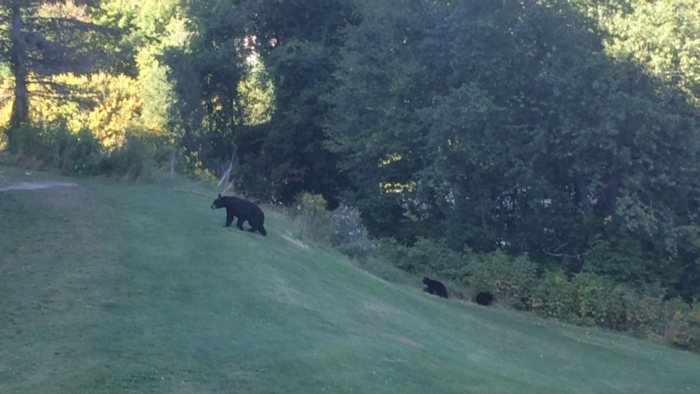 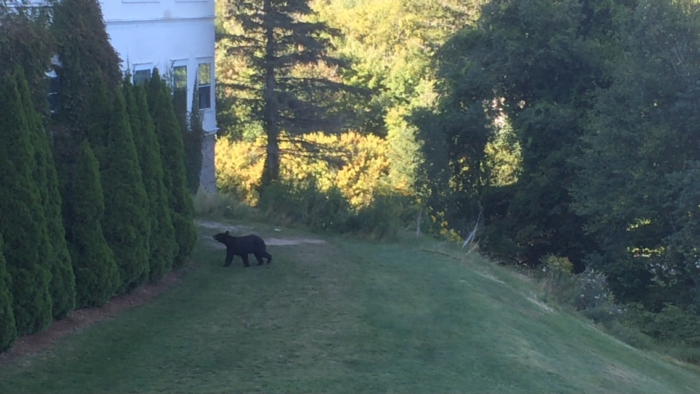 My name is Alex and I dig mountains. I grew up in southern New Hampshire taking summer car-camping trips with my family to the Whites, gazing out the back window at their massive stature and dreaming of sitting at the top of them. When I'm not out in the back country or stuck at my day job, I build and repair guitars and other fretted instruments. Next spring I'm attempting a northbound thru-hike of the Appalachian Trail. Join me for some general trip preparation, training hikes, highfalutin' philosophical musings, bear stories, and more.