That’s what I hear a lot these days. “That’s crazy.” “You’re crazy!” “How crazy.” Well, that’s OK. It probably is crazy to choose to live in the woods for 5 months, but I’ll accept that title. Recently, Zach asked how far away we were. While doing the countdown, I almost panicked. I hadn’t realized it was really closing in so quickly.

Looking at it one way, it seems like it’s still so far away. But 3 months… that’s not that long at all! It’s crazy to think that this time last year was about the time I made the definite decision to thru-hike. I’d fooled around with the idea, but it was about this time of year that I committed to it. Then, it seemed like now would NEVER get here. Well, it’s here. And now instead of watching all of the thru-hikers preparing for their journeys, gushing over their gear purchases and pouring over their blogs… now? I am them.

When I started planning a little over a year ago, I thought I’d never get everything done, everything in order, everything I needed. But, lo and behold, here I sit behind my Macbook, 3 months to my start date, and I can confidently say that I have almost all of my gear and almost all of my life ready to take off to the mountains for 5 months. Pack, sleep system, cook system, all taken care of (full gear list coming soon!), house ready to be sold, loose ends at school being tied up (ahem, diploma, I’m talking about you!), selling my business (curveball!), long term petsitters (and backup petsitters) lined up for my dogs, most of the money I need saved up, and credit cards (almost) paid off. Whew! I’ve been busy!

And then, the things I haven’t done…

One huge thing still hangs over me. Well, one huge thing that’s made up of multiple things. HEALTH. Mainly, health insurance, which I don’t have. And I’m not sure I should get. And I’m not sure I shouldn’t get. And what kind to get. And what kind I can afford. Ugh. It’s already plaguing me, not having insurance. I’ve had to have some routine visits that are costing too much, pulling money out of my hiking fund. No bueno.

The second big health related thing I’m struggling with are some joint problems. My ankles are giving me fits. It seems every time I’m on the trail, I strain or sprain one of my ankles. I’ve sprained each of my ankles no less than 4 times each this year, and almost all of the accidents happened while hiking. I’m so unbelievably worried about how this is going to impact my hike. Then there’s my knee. Three weeks ago I made a silly mistake, got on at the wrong trailhead, and turned a 12 mile day into a nearly 15 mile day. I was already hesitant about being ready for a 12 miler. A 15 miler was way too much to attempt but by the time the mistake was realized it was too late to turn back. I was fine until about mile 12, when my right knee starting hurting. By the end of the hike I was in tears. Tears. I don’t cry. But the pain was almost unbearable. I made it to the car, and the next day there was no pain in my knee at all. However, the following weekend, I attempted an 8 mile hike and again had severe pain in my knee, this time after only about 3 miles. The following weekend I did a 4.5 mile hike and had knee pain again after about 3 miles. I don’t know what is going on or what to do. I’m also having some pain in my hip on longer hikes, mainly uphill sections, but it isn’t nearly as painful and doesn’t seem to really hinder me all that much.

The third health related thing is my weight. I had hoped to drop at least 20lb before starting my hike, to take some weight off my feet and joints. Hasn’t happened. My crazy transient lifestyle (I’ve stayed temporarily in no fewer than 4 houses in 3 towns in two states, just since Christmas) and insane working schedule has prevented me from managing much more exercise than my weekend section hikes. I guess that weight will be coming off during my hike, but I know that’s going to make it harder on me.

One little loose end I haven’t quite unraveled yet is how I’m getting TO the trail. I’m starting at Fontana Dam. I’m currently residing in south Georgia, probably 8 hours away. I haven’t worked out details for how I’m actually getting to the trail to get started! But I trust those things to fall into place.

The here and now.

Focusing on the present, I am now up to >80 miles of the Appalachian Trail completed! As some of you know, if you’ve followed my blogs, I’m section hiking everything up to Fontana before I start in May. Well, I’ve done one long section from Indian Grave Gap to the NOC. Now, 80 miles isn’t much in the grand scheme of things, but those 80 miles have taught me SO much and have just hammered into me how badly I want to do this, to thru-hike, to complete the trail. So, some photos from some of my more recent hikes follow.

First off, not all trails are white blazed (though, the best ones definitely are!) 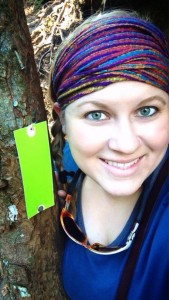 Wanted to get on the AT, but wasn’t able to work it out. However, we stopped by Panther Creek to follow blazes of a different color for a little while. Neat place! 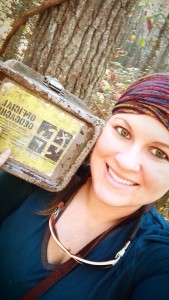 Since I was on the trail and had cell service, I decided to check and see if there were any caches nearby. BINGO!

New Year’s day, I participated in a hangover hike! I was not, however, hungover (thank goodness because I surely would have perished). This was the hike that was supposed to be 12 and turned into almost 15 and ended in severe knee pain and a sprained ankle. However, as always, the beauty outweighed the trials and the joy outweighed the momentary despair I felt when I thought I’d broken my ankle. 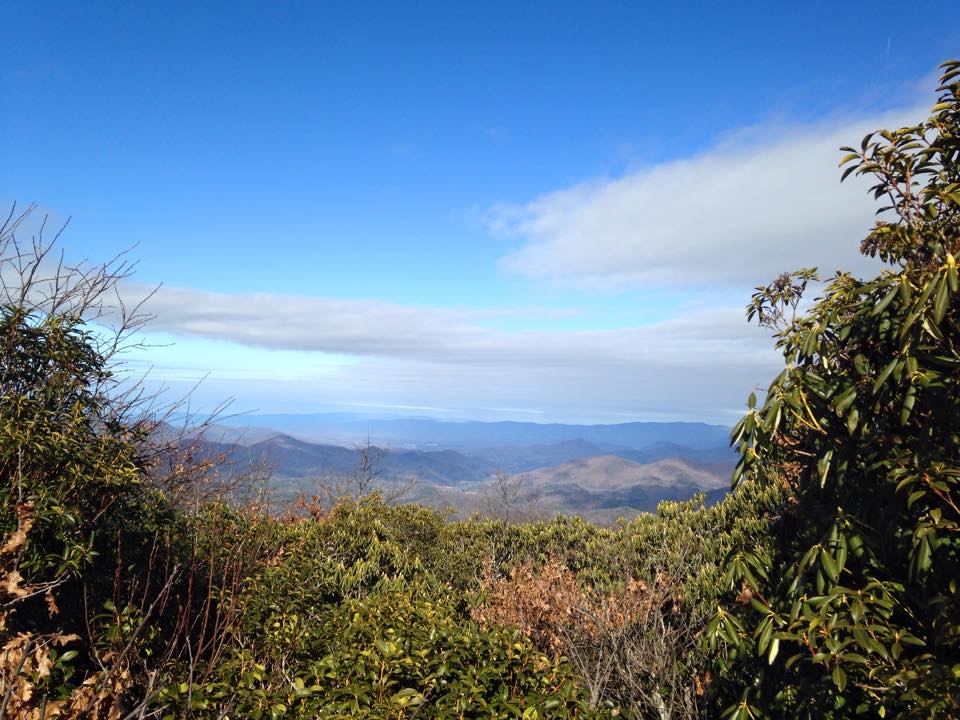 The view from Tray Mountain was spectacular! And made the trek up (including the two extra unintended miles) worth it. 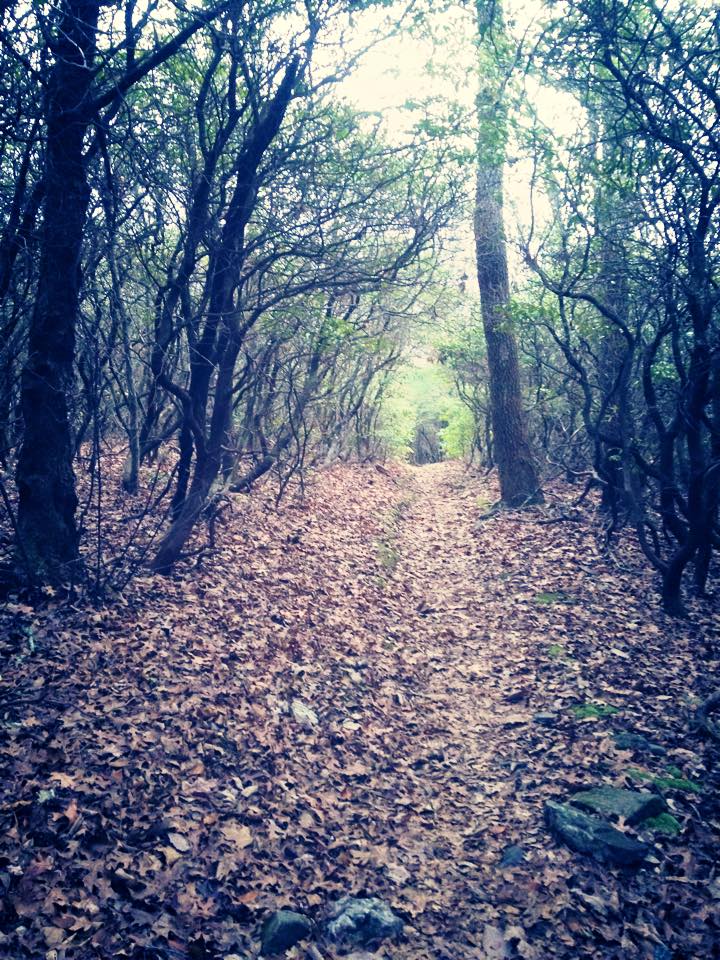 I have decided that I LOVE winter hiking. The temps are fantastic (40-50 degrees), most trees are bare, allowing unbelievable views in many directions, and theres just the right amount of green left. 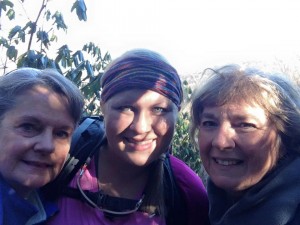 The best thing about the Hangover Hike was the gals who joined me! I feel so fortunate to have met some awesome hiker ladies. Reggie, left, attempted a thru-hike a few years ago and now section hikes. Dr. Brighteyes (right), is working on the AT in sections. Photo cred to Reggie Jay.

The following weekend, I headed north to tackle Wesser Bald and the grueling, ankle-killing, knee-grinding descent into NOC.  I was again joined by Dr. Brighteyes, and my friend Jacob, who is also attempting a thru-hike this year. 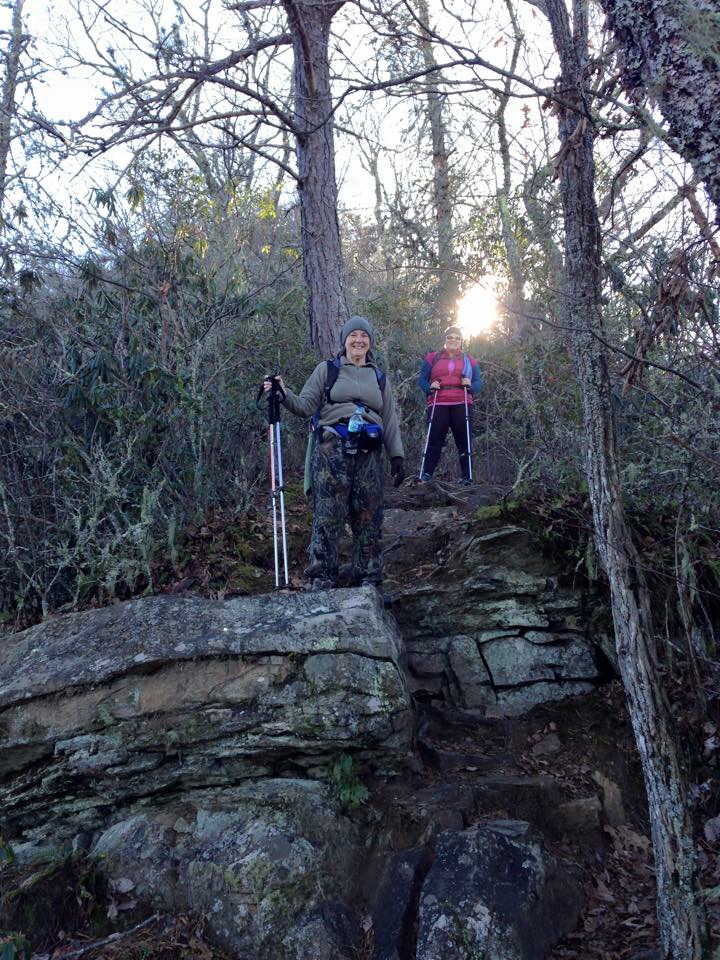 We stopped for lunch at The Jump Off before beginning the descent into NOC. Photo cred to Jacob Sellers. 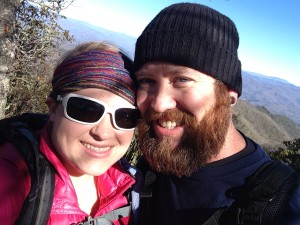 Jacob and I stopped at a lower lookout point at Wesser. I really believe that the people you meet make the hike, and have been trying to take more photos of people! Also, that beard though.

Wesser Bald is probably one of my favorite places so far on the AT. Granted, I haven’t seen too much of it yet, but, as Dr. Brighteyes said at the top of the platform, “Camp out for a while? This place is liveable!”

One of the coolest things I’ve done recently is take a friend, who had never been hiking before, on a short section in Georgia. It was so incredible to witness her experience the magic that is the Appalachian Trail (blisters and all) for the first time, especially since it was her first time ever hiking! Her boyfriend, a professional photographer, came along and got some really cool shots. 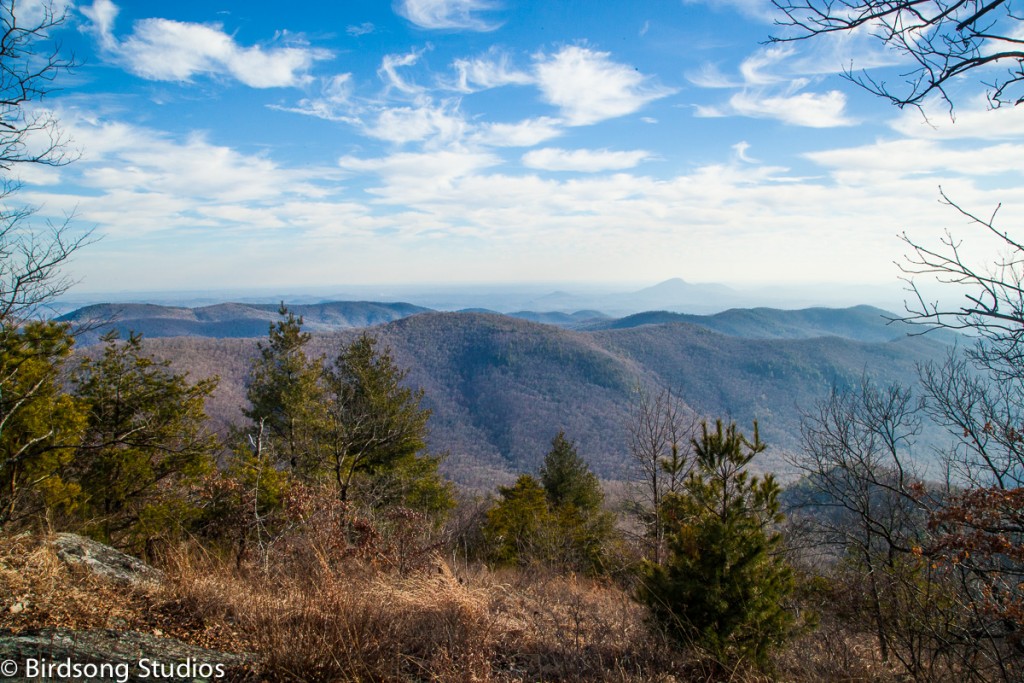 Indian Grave Gap to Unicoi was a really cool little section including Rocky Mountain. I really enjoyed walking on the ridgeline and the winter views. Photo by Derrick Birdsong of Birdsong Studios. 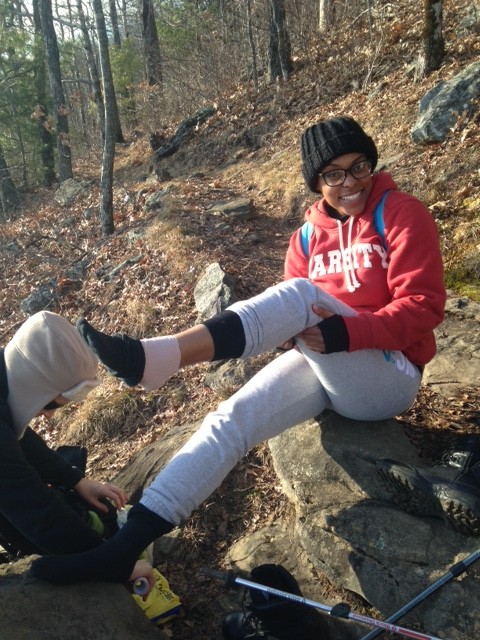 Edwin performed trail surgery on Victoria’s achy feet to get her through the rest of the hike. I think it’s a rite of passage on the AT to have some sort of foot issue at some point, so Victoria got introduced correctly. 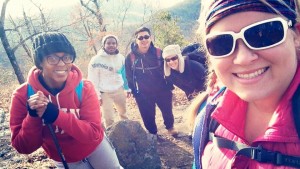 I’m so in love with this photo. I’ve known these two girls less than 6 months but they’ve already become great friends, and they both have fantastic guys who I’ve been really fortunate to get to know.