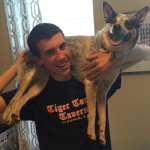 The calendar year triple crown (CYTC) in the world of thru-hiking is completing all three major US long trails: the Appalachian Trail (AT), the Pacific Crest Trail (PCT), and the Continental Divide Trail (CDT) in a single calendar year.  Each trail usually takes an average of five to six months to complete.  Their combined mileage is greater than 7,500 miles and covers the three major mountain ranges in the US. 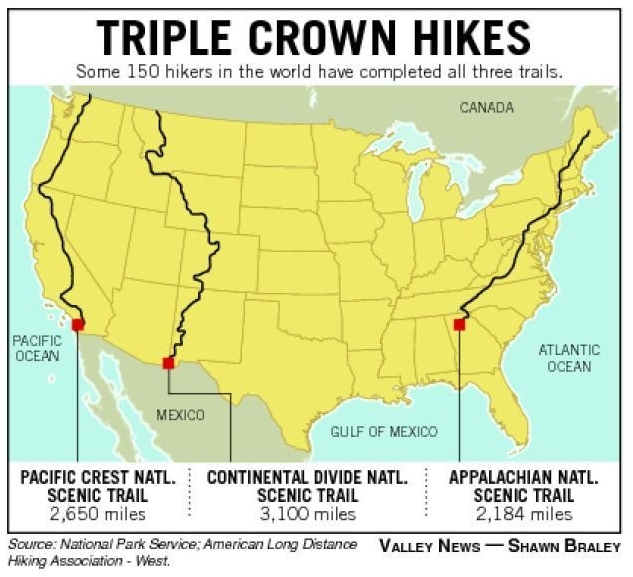 (credit: National Parks Service) All three trails on one map!

Each trail has its own unique character and challenges, but fitting all three into a year starts to cause a logistical nightmare.  The biggest challenge is trying to cover all those miles between the end of winter weather and the beginning of winter weather.   The standard weather windows for each trail is March through October.  People can start and finish at all sorts of different times, but most hikers are doing the bulk of their hiking in this time-span.

The winter weather offers cold and harsh weather, but snowpack is usually the biggest concern.  On the PCT, this concern is in the high Sierras, which is a couple hundred mile stretch above 8,000 feet of elevation.  On the CDT, pretty much the entire state of Colorado is above 10,000 feet.  Early in the year you will be waiting for some of the snow to melt to avoid being slowed down or risking serious injury.  Most PCT hikers, depending on the snow year, will enter the Sierra starting in early-to-mid June.  CDT hikers need to wait until a similar time frame or be out of Colorado by September or early October.

No plan survives contact with reality, but the planning is still important for flexibility on trail.  With that in mind, I will share a rough outline of my plan along with some notes on weather, options, and concerns.

Start on the Appalachian Trail starting on February 13th heading northbound – and try to not freeze to death.  Other people who have attempted or completed this challenge often start in January or in February.  The later you start the better weather you hope to have, but the less time you have to finish your attempt.  In a perfect world, I would get up north and have amazing weather through Vermont, New Hampshire, and Maine in mid-to-late April.  I would then finish the AT in early May.

Anyone reading this who hikes up there is probably already laughing at such foolishness.  So my plan is to jump off trail when I start getting slowed down too much due to snow & ice – some of this decision will also be dictated on my mental state and how much I want to jump to the desert.  (I will be desperate for some warm weather – I’m a true southern boy) 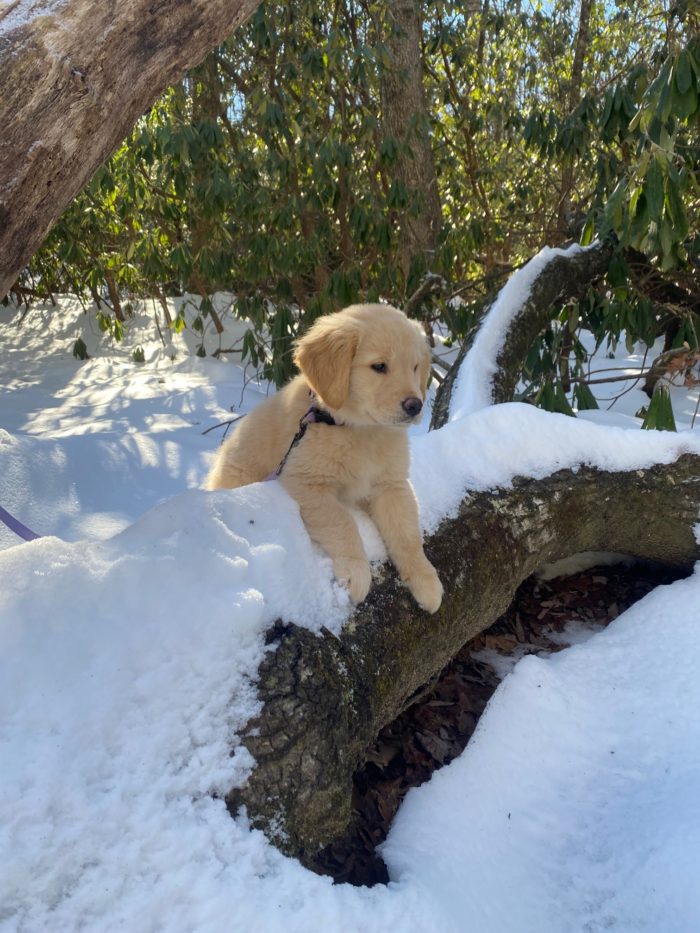 This is one of my two times ever hiking in snow! And a puppy handled it, so maybe not the best test.

Head to the desert!  Which desert is that?  Well that totally depends.  My PCT permit date is early-ish May.  If I make it on the AT until then, I will jump straight to the PCT and head northbound.  If I leave earlier, then I will go to New Mexico and hike the desert section of the CDT.  A side note is that this also depends on the snowpack in the Sierra.  If the snowpack is high, I will try to get a later permit date so I can enter the Sierra while having the best chance to keep pumping out higher mile days.

You can think of the desert section of the CDT as a relief valve, it can help me if I jump off the AT early or try to push off the PCT.  Either way, once I am on the PCT, the plan is to hike it northbound all the way through in roughly ninety days (hopefully less).

Once I am finished with the PCT, I will fly or ride a train over to the northern terminus of the CDT in Glacier National Park.  From there, I will head southbound as quickly as possible as I race against the Colorado weather and impending snow.  From a high level of logistics, once I’m on the CDT it will be just a race south.  From a more detailed level, the CDT has many alternate routes that can be taken.  Most of these decisions will occur when the time comes.

I will finish the CDT either at the Mexico border or wherever I left the trail if I hiked some or all of the New Mexico section earlier in the year.  The total time on the CDT should also be around ninety days.

It is time to head back to the northern terminus of the AT and finish the rest of the trail.  This should be less than 1,000 miles and will probably be cold once again.  If I make it this far, it will be a race to finish before Thanksgiving and get back home. 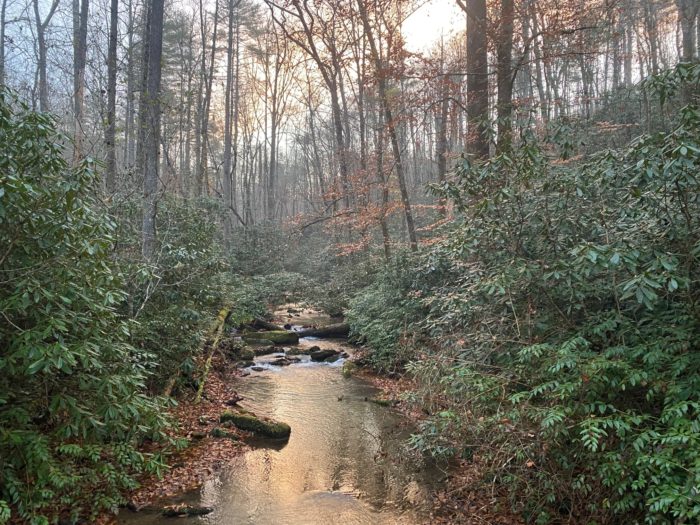 This is the winter hiking I like – but do not expect much of this year.

All information above is bound to change.  In a perfect world I would hike all three trails in one shot:  AT northbound, PCT northbound, and CDT southbound.  I know of one person who has successfully completed the CYTC this way, but I doubt I am up for the suffering on the AT to make this happen.  I also will finish before Thanksgiving in a perfect world and get to celebrate with my friends and family.  But if I’m still out there and still have miles to do, the hiking will continue.

Most attempts at the CYTC have happened with a similar plan.  Some have involved more jumping around to grab weather windows but obviously required more travel.  Three hikers completed the CYTC using a different plan.  Which was to start much later, start on the PCT northbound, then hike the CDT southbound, and then shove the AT into the last three months of the year (their plans also changed due to late snow in the Sierra, and they grabbed the CDT desert first).  This is probably a better weather window opportunity, but also gives you very little wiggle room from a timing perspective.  If you lose a week due to injury or other issues, or are just not pumping out the miles, you would finish after December 31st.  This turns your calendar year triple crown into a single-year triple crown.

Plans are great, but this one will probably change a lot due to my needs and the weather dictations.  But all the research put into the trails will help me make optimal decisions.  I hope this was helpful to someone because I generally despise logistics and the research took a lot of procrastination and energy.  But I did it mom! 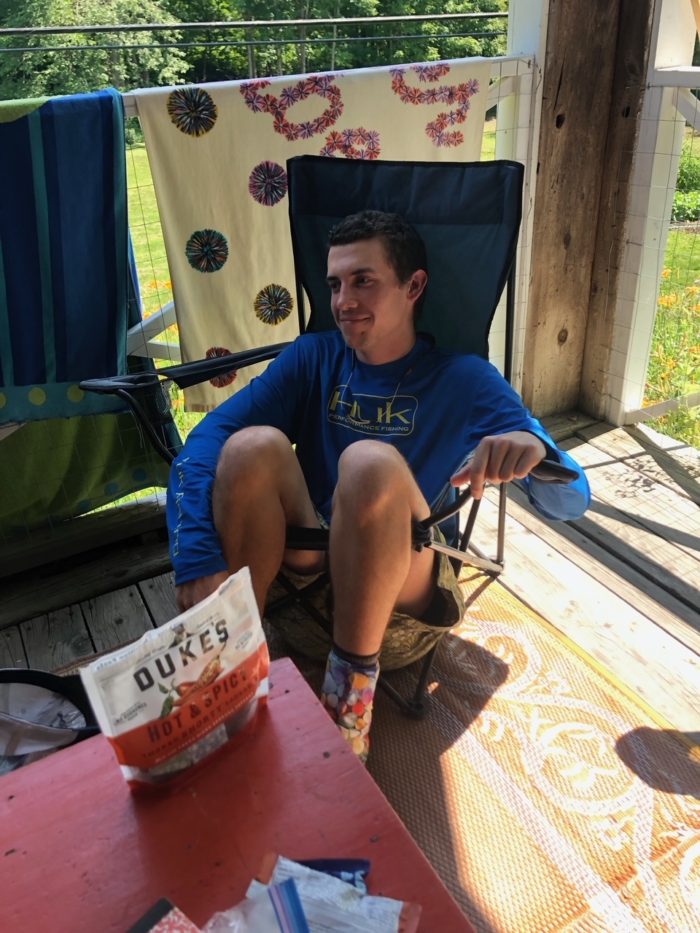 This is how most plans go. You just got to smile and laugh about it.

AT Nobo '19. 2022 will be an attempt at the calendar year triple crown (CYTC) - AT, PCT, and CDT. Trail name is Blouse and will be pushing way beyond my limits this year. I promise to be honest, attempt to be funny, bring up fishing more than once, and hopefully pet some dogs along the way.