This week has been the most beautiful so far. Big Bald and Beauty Spot last week were just the tip of the iceberg. The Roan Highlands are hands down the most breathtakingly beautiful part of the southern AT, in my humble opinion.

Y’all don’t know this yet, but The Brain is obsessed with Roan. Last year when we were still dreaming about our hike I read a couple books about the AT and my favorite was Roan Mountain: History of an Appalachian Treasure. If you, too, love mountains and ecology and history, definitely check this book out. From it, I learned that the  balds of the southern Appalachians are a literal mystery. Roan Mountain was, like many American forests, almost completely logged about 100 years ago. Now, through conservation efforts it is once again a lush, dark, spruce and fir forest. We were so excited to hike through this section and it did not disappoint.

Thanks to our 20 mile slack pack we only had about 30 miles to go until Hwy 19E, where we planned to go into a hostel. The weather prediction was rain Monday night through Tuesday night so we decided to do it in 2 days so we’d have clear skies.

Sunday morning Cheetah took us back to Iron Mt road, along with 2 other hikers who’d done the same slack (they are so much faster than us, we didn’t see them again until The Station.) It took us a bit to adjust to walking with our packs on again…

The first 10 miles were pretty chill and uneventful. We decided to go all the way to the top of Roan and camp by Roan High Knob, the highest shelter on the AT at 6,285 ft. The climb up Roan is pretty long, about 4 miles, and it was a pretty hot day. We felt pretty good for most of it but did take several long water breaks…

The best part of climbing Roan, and all the higher elevation mountains so far, is watching the composition of the forest change around us. I wish our professional forester sister, Julia, was with us so she could educate us. We just know it’s pretty and we love the feel and smell of these forests. 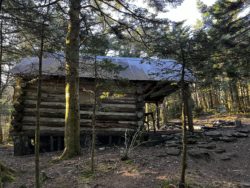 Camping at Roan High Knob was an excellent decision. The cabin itself is dank and spooky, not worth sleeping in unless the weather is really bad. We camped in the woods around it and just loved it. Our favorite campsite so far. 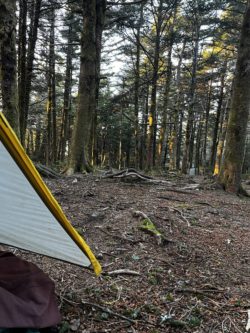 We were sad to leave in the morning but so excited for what was ahead. We made it down to Carver’s Gap pretty quickly. We ran into our Australian friends, Compass and Moss, who we have bonded with over black snake sightings. They warned us that the sign we saw on the way down promising trail magic was a lie but the bathroom in the parking lot did have lots of nice soft toilet paper. That was enough trail magic for us! 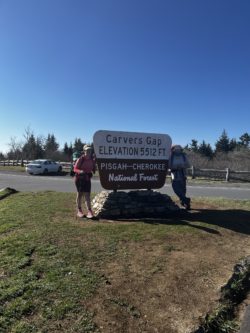 We climbed to the top of the first of the 4 balds we’d cross today. We had sweeping views of Roan behind us, the other balds ahead and the surrounding mountains and valleys. We had a clear day with blue skies and big fluffy clouds. We couldn’t have asked for a better day to be there! There was much exclaiming and picture taking. 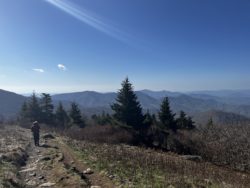 At the side trail to Grassy Ridge Bald we spent about 15 mins walking around looking for the water source Far Out said was near there. Turns out it was about 0.1ish past the trailhead.. We found it eventually and filled up, then chatted for a while with a section hiker and his Very Good dog.

2 balds down, we went down down and around till we hit the side trail to Overmountain Shelter. We decided not to go look at it, but did read the signs about the militia men who walked through the pass in the snow to go beat the British in a battle 170 miles away. Badass. 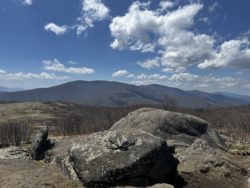 The next climb up Little Hump kicked our butts a bit. We did enjoy the view back to Overmountain Shelter, one of my favorite views. We ate a welcome lunch on some rocks near the top of Little Hump, unable to get enough of the fantastic view back over everything we’d hiked that morning. 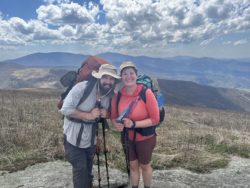 We went down again before the last climb up Big Hump, which really kicked our butts. Totally worth it, though, because being on top of Big Hump is like being on top of the whole world. We took it all in, a bittersweet summit because it was the last one of the day. 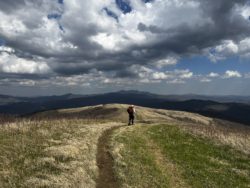 Big Hump was not the last major moment of the day. A few miles from 19E we crossed out of North Carolina and into Tennessee for the last time. We’ve been wiggling across the border for weeks and now, we are officially done with North Carolina! 2 states down baby! 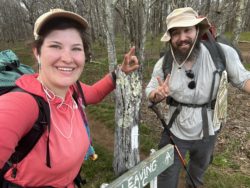 With relief we made it to Hwy 19E and hoofed it a last half mile up the road to The Station. We just had to stay there since they have an extensive craft beer bar downstairs! While we were enjoying our beers we noticed the neighbors showing off their BABY GOAT and other friendly farm animals. The Brain got in a great goat snuggle sesh. 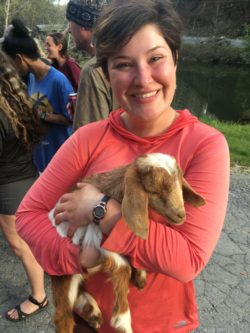 After hiking 50 miles in 3 days we were pretty dang tired so we took a zero day at The Station. We thought we were being clever and avoiding a nasty rainy day but it actually didn’t rain too much. We felt a little guilty but beer, ice cream, movies, multiple games of chess, and the chance to take care of some administrative phone calls won out.

Feeling much refreshed by our lazy day and fortified by a hearty breakfast, we struck out for an 18 mile day, our longest with the packs on. From start to finish it was absolutely beautiful! We stayed at pretty low elevations so the trees had leaves and there were lots of wildflowers. We crossed through several meadows, one with excellent views back to the Roan Highlands. 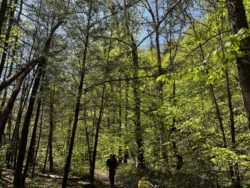 After about 5 miles we hit the 400 mile mark! We finally celebrated with a trail beer! We actually waited a bit and drank them at 400.7 in front of Jones Falls, the first of 3 big waterfalls we’d pass. 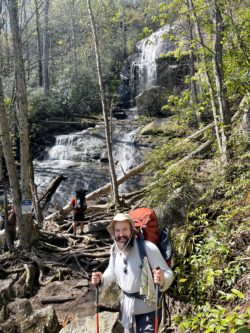 We ate lunch at the next set of falls, Mountaineer, and took a long break at the last set, Hardcore Cascades. 18 miles is a long day and despite the generally easy terrain we were pretty tired by the end. As usual we were the last ones to make it to the shelter and the last ones to finish dinner and get in our tent. 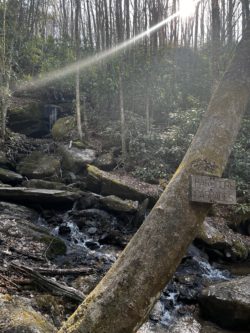 In the morning we kept the theme going and were the last ones to leave after a wide ranging and pretty fun breakfast discussion with McLovin. One of the best parts of the trail social scene is how quickly you can get into deep conversations with complete strangers, if you are open to it.

We had 15 miles ahead of us to make it to Boots Off where we’d shower then get shuttled to Johnson City for our bus to Richmond (we couldn’t miss our first nephews first birthday party!) We made pretty great time all day. The showers at Boots Off are amazing and provided pretty solid motivation.

At one point, Pinky noticed a snake slithering into a partially hollow log on a dilapidated cabin. We watched him for quite some time, he was about 4 feet long! Suddenly, the snake jerked and a MOUSE sprung out of one end of the log and scurried away into the grass. The snake, clearly disappointed, worked his way through the log some more and stuck his head out the other side, leaving a few inches of his tail sticking out the end! It was really cute. 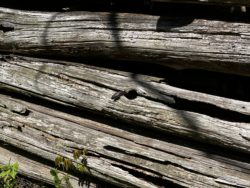 We ate lunch at the base of Laurel Falls. We enjoyed it so much we stayed for at least an hour and a half. As we were leaving we were overjoyed to see Terri and Luke, a couple we met on our FIRST day on trail and haven’t seen since maybe the day we crossed out of Georgia! We caught up and exchanged stories. It’s always so fun to run into people again like that! 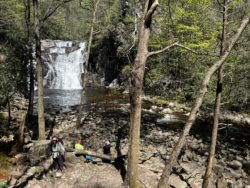 After some leisurely hiking along the river, and a break to psych ourselves up, we tackled the stupidest climb in all of Tennessee, Pond Mountain. For some reason the trail goes up and down the side of this big dang mountain with no views and it takes 6 miles to do it. Pinky climbed it like the champ that he is, The Brain slowly brought up the rear, and eventually, we made it to Boots Off. 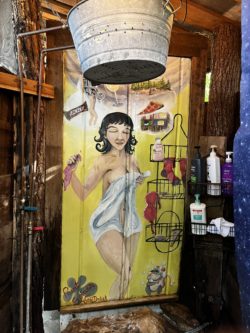 Bucket shower is the best shower

We took the best showers of the trail so far and then rode with Jim, the lovely owner of Boots Off, into Johnson City. We did not know that downtown Johnson City was so *hip.* We ate a big dinner then went over to the bus station.

Our bus was coming at 2am so we planned to nap in the station until then. Unfortunately, the station was *closing* at 10pm! Luckily, we are hiker trash now and had no shame about setting up our tent in the breezeway of the station, climbing in and falling asleep to the sound of horrible karaoke from the bar across the block. 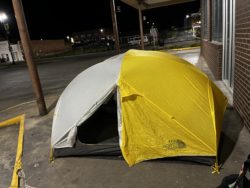 We’ve been home almost 2 days now. It feels like we never left and like we have been gone for years. Seeing our family and our cats (one is mad at us and the other was overjoyed) is refreshing. Usually zero days feel like a twilight zone, but this has actually been relaxing and guilt free. Still, we are very much looking forward to going back on Monday. We are super excited to finish Tennessee this week and make it into our home state!