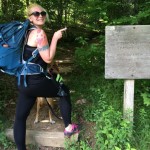 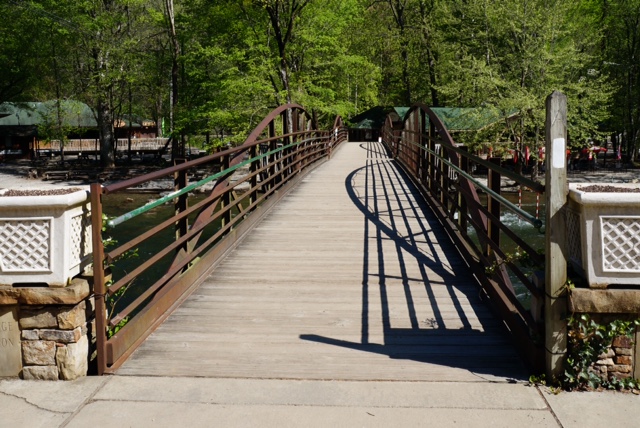 Ok, death by rattlesnake is just for some dramatic effects. No one died and no snakes were harmed, but I did have a rattlesnake encounter that I will get into here shortly. I promise. Tinkerbell and I were eager to get moving out of NOC, but first, Jason! Still dodging trail names and all. I was sure everyone I had started with in Georgia would be miles ahead of me by now. But to my surprise I ran into Jason while at the NOC. It was great to see a familiar face and catch up with him. After chatting Tinkerbell and I gathered everything and made our way to the trail. We had heard it was a hell of a climb out of the NOC and it was pretty challenging. Let me give you an idea of what we conquered. We started at an elevation of 1,749 ft and by mile 7 or so we were at 5,062 ft in elevation. Along the way we stopped at “the jump off” to eat lunch. While eating we were approached by a SOBO hiker who warned us that he had just run into a pretty pissed off rattlesnake about 25 feet away laying directly on the trail. Naturally I grabbed my camera with the mission of finding it. What could go wrong, right?!

I was pretty freaked out walking along the trail trying to find the snake unsure of exactly where he was now. Then before I ever saw him I heard him. The rattle did not sound like I imagined it would. It sounded kinda like an insect, like a cicada. By the time I tracked him down he was camouflaged perfectly within the leaves next to the trail (See if can you spot him in the photo below). 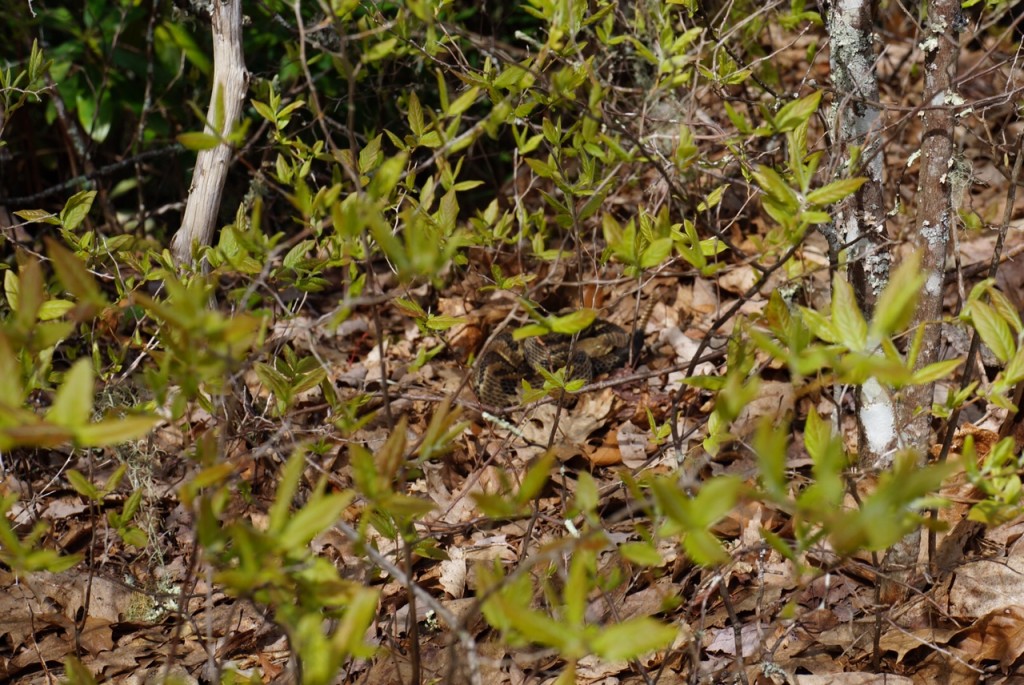 Can you spot the rattlesnake?! 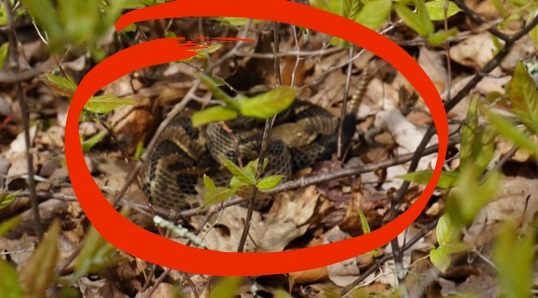 I snapped a few shots and went on my way. It was awesome and terrifying all at the same time having my first rattlesnake “encounter.” I was reminded that I am a guest out here. The animals and mother nature rule shit. Any hiker could have easily missed this snake and stepped on him if they stopped to pee or something.

After our exciting day we rolled into the shelter and it was a full house. This is where we met Superfeet from Australia, Superman, Carver, Dave, Waves, Young Buddha, Twister, Wrangler (because a jeep ran her legs over), Coyote (her real name), two German dudes, and many other interesting characters. It was great sitting around the fire and getting to know them all better. We pretty much keep running into most of this crew over the past 3 weeks or so now.

I am an early riser on the trail. I am typically up and ready to move by 8am (that is early for me). Tinkerbell is too. We are usually ready within 5 minutes of each other. We had a lot of much welcomed down hill terrain today. We dropped about 2,000 feet in elevation. My knees are already beginning to give me issues. Nothing major just little annoyances. On top of that both my pinky toes keep getting wicked blisters on them. Not pleasant to say the least while aiming to hike a 10 mile day. Between my knees and my feet, I was struggling coming down into Stecoah Gap. We were also dreading the fact that after this gap we would be hitting “Jacobs Ladder.” This climb was a popular topic of discussion the previous night. Everyone was throwing out their best guess about how brutal the climb would be. Then a sight for sore eyes (or feet), TRAIL MAGIC!

Four amazing thru-hikers-class of 2002 had a full spread for everyone. Their trail names were Loggerhead, Strong fish, and Dessert rats. Sandwiches, soda, beer, cookies, chips, and much more. You will never quite understand how incredible something as simple as this is until you have been in the backcountry a few days. Your body is burning so many calories and you can only pack in so much food with you. Something like trail magic is a huge moral boost mentally and physically. After spending an hour or so relaxing and eating, Tinkerbell and I set off to conquer this beast of a climb into camp. You always have some huge ass climb to conquer your last mile or two to get to the shelter, or some crazy climb out of the shelter the following day. It never fails.

I don’t remember exactly what day this happened, as I am basically skimming my hand written trail journal right now and trying to get you caught up on some of the exciting events over the past few weeks. Long story short, I forgot my freaking trekking poles and luckily Tinkerbell saved my life with an extra single pole to use until we got to Fontana Dam where I had my poles shipped. Anyways, my left hand was just down by my side. I used my pole with the right hand. I don’t know if it was the blood all rushing to my hand over the past few days or what but I was feeling some pains. When I looked down at my left hand my wedding ring was literally cutting off my circulation. Like super uncomfortably tight. I panicked and quickly tried to yank it off. And I was like “Fuck, I can’t get it off!!” Tinkerbell came over to take a look and at this point I’m spitting on my hand to try and lube it up and get this thing off of me. Nothing. My hand was super swollen. Tinkerbell suggested raising my hand over my head and let the blood flow down a minute. Great idea. After a few minutes of doing that and then lubeing it up again I managed to just barley get it off. I swear something so stupid would only happen to me. Lesson of the day: It’s best to just leave all jewelry home while thru-hiking.

Ok, so a little back story here. My family and I do backpacking trips as often as we can. For the longest time now I have been obsessed with trying to get some photographs of being above the clouds. I mean so obsessed that I dragged them with me to Roan Mountain when it was freezing, night hiked to be on the balds before sunrise, and froze our asses off until the sun came up. Like, that insanely obsessed with trying to capture a “clouds” shot. We did get some incredible colors that day but no clouds. After that I did tons more trips with no luck. I am sure you can imagine how stoked I was when we began walking out of Brownfork Gap early one morning to a sea of clouds!! Dammit. Finally! Poor Tinkerbell had to deal with me stopping every ten seconds to shoot for a good hour. 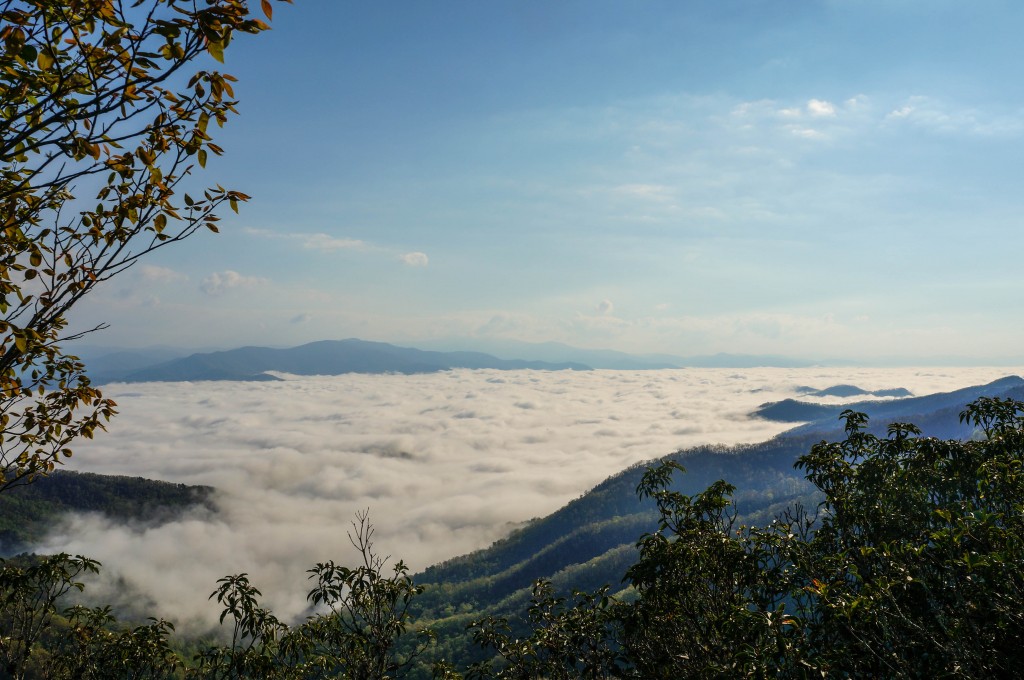 After a long 12 mile day we finally reached Fontana! We called a shuttle and were excited to shower. The following day we would meet our new hiking partner (Brown Sugar-Formally known as Katie). Until next time…

Originally from New Jersey and now reside in North Carolina. I am an entrepreneur, a wife, a mother, outdoors mountain lover, and have been cursed by wanderlust! Family always comes first to me. When I am not adventuring with my husband, 11 yr old daughter, and dog, Margo I am; working on client projects, getting tattooed, boxing, writing, photographing, rescuing dogs or creating. By the end of 2015 I will able to add A.T. thru-hiker to this list. I have a huge appetite for life and choose to live one full of adventures. Welcome to all the shenanigans that make up, Jessica--> www.jessicageorgia.biz