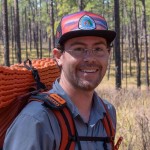 When You Fall for the Trail, Literally

There’s something magnificent about spending time outdoors. As a hiker, there are moments when you fall for the trail. You might witness a stunning summit, a splendid sunrise, or some timely trail magic. Today brought a few of these moments and made the mileage worth hiking.

It Starts with Rain

I woke up in the shelter and was immediately sure I made the right decision to stay here and not push further yesterday. I had plenty of time to relax last night, cook, and get ready for bed, leading to a restful night. In fact, everyone seemed to sleep in as no one was stirring at first light.

After a pour-over coffee and some oatmeal, I finished packing and hit the trail. I wanted to make full use of the dry skies, but after only a minute it started raining and out came the rain gear. Annalise and Indy had joined me and we all set out in the rain on our longest-mileage day so far. At least I attempted to beat the rain this morning. Thankfully, the rain stopped before too long and I was able to stow the rain gear again and tread on somewhat dry ground. Annalise and Indy fell behind, so I kept going and made the climb by myself.

The climb up to Cheoah Bald first thing this morning was pretty tough, but short-lived. Turns out there is a view on both sides of the trail. One side had close, opposing mountains; the other side was more open and you could see one set of mountains behind the other for quite a distance.

I stopped a couple miles later at Locust Cove Gap for a break where Annalise, Indy, and DJ (whom I had briefly met at NOC with Manimal) also eventually stopped for a break. We chatted, hydrated, and snacked to fuel up for the next bit of trail. I decided to wait on filtering water since there was supposed to be some near Stecoah Gap a few miles ahead.

Somewhere in this section I had to once again prod a snake off the trail. They look like pygmy rattlesnakes but none have had a rattle. I’m not sure which specific snake this is, but I’ve seen three as of today.

Almost 2000ft down from Cheoah Bald, I arrived at Stecoah Gap. I was definitely ready for lunch, but filtering water became my first priority. The side trail for water was supposedly down the road and then into the woods, but the description in the guide was slightly vague. About 0.3 miles, according to the guide. Walking over a half mile for water before lunch? Ugh.

Annalise arrived and I offered to take her water bladder and fill up since I was headed for water anyway. She watched our packs while I trekked to the water source and although the side trail was slightly obscure, it felt shorter than 0.3 miles. After getting water, I enjoyed every bite of lunch: jerky, cheese, and Chex mix. I thought DJ would roll in since we stayed so long for lunch but he never showed. Stecoah Gap has a little parking lot and picnic tables and if I’m being totally honest, I lingered awhile here hoping one of the cars that stopped would offer me some trail magic. No such luck. Oh, well! 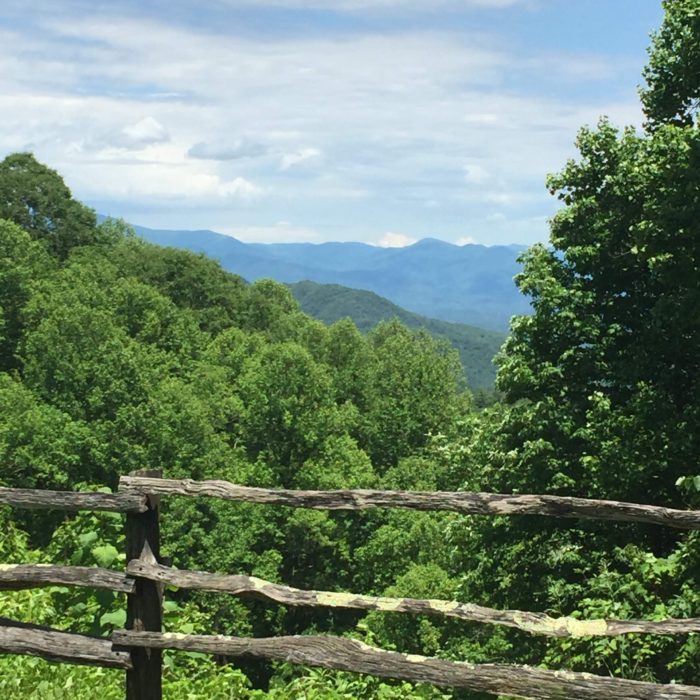 We took off back into the woods and discovered a section of trail known as Jacob’s Ladder. A 647-foot climb in 0.5 miles. It’s almost straight up with only a couple of switchbacks at the top. I passed a SOBO hiker named Cougar and she told me I was almost at the top and it had a great view. She was right; my legs had bought me another view of the mountains.

After that climb, it seemed like a good idea to take another break so I stopped at the Brown Fork Shelter, filled up on water again, and threw in a second set of electrolytes for the day. Seemed like a good idea with the ups and downs ahead combined with the longer-mileage day. Spoiler alert: it was a good idea. Today was warmer overall, which is a welcome trade-off for the rain that kept bringing cooler temps. The warmth made me glad I was carrying water and electrolytes.

When You Fall for the Trail

I’m not exactly sure where in this section, but somewhere in here there are two boulder/rock hopping sections separated by a switchback. I had my first fall at the end of the second one. 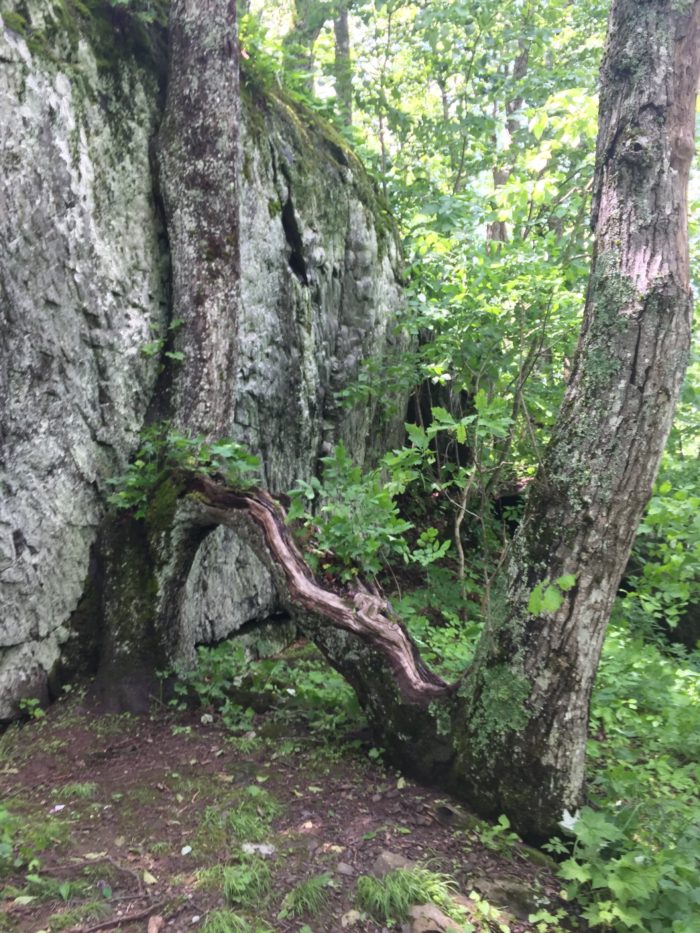 The photo of this interesting tree was taken just minutes before I fell on the rocks.

Slowing my pace, I put my foot on a rock that felt like sure footing.  I was wrong. My foot slid sideways and forward, which launched me forward toward the edge of the trail and a steep downhill. I drove a trekking pole into the ground and did a barrel roll, which kept me from going over the edge and allowed my pack to absorb most of the impact. Thankfully, I avoided sharp rocks and had only roughed up my leg, hand, and elbow a little bit. I didn’t draw blood, just roughed up my skin. Close call, but I couldn’t have done anything else to avoid it. I fell for the trail and it turned out OK.

Exactly one mile after my break at the shelter, I came across a view marked on the Guthook’s app and wow, it was a good one. More views of the mountain range but this time framed by beautiful blossoms on the trees. Great spot. 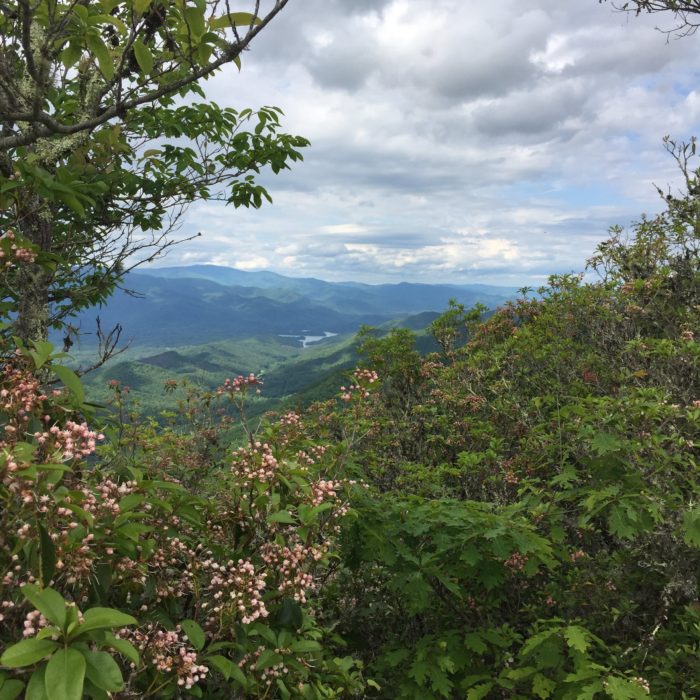 Afterward, a whole bunch of PUDs (pointless up and downs) ensued until we hit Hogback Gap. The sign for this gap has been swallowed by a tree and you can’t even read the sign. Interesting. I walked past it without stopping and did the same at Cody Gap. It was starting to get late in the day and I was ready to get the next 800- to 900-foot descent done.

On the descent I caught up to Joe and Kass, whom I had Met at the NOC outfitter while they were getting their Smoky Mountain permits. I said “hey” and basically blew right by them. Shortly after, I stopped just shy of the camp at Yellow Creek Gap to see if I would get signal and send a message or two as I was pretty sure I wouldn’t get signal at the shelter tonight. After a few minutes, Joe, Kass, Annalise, and Indy all appeared out of the woods and we all made the final mile or so to the shelter.

When we got there, we had the most sociable night I’ve had on the trail so far. Chatting about other hikers we had passed, snakes, bears, weather, food, and other trail stuff. I wish every night could be like this. It’s almost like a big family meal get-together except everyone is a hiker and a bit of a stranger. Good times.

Rose was at the shelter tonight (she was at the last one, too) and offered to let me add my bear bag to her line because she had just pulled hers down and was rehoisting it. I happily accepted because I hate fooling with the stupid cordage. Hope that works out. She seems to have a good hang going. 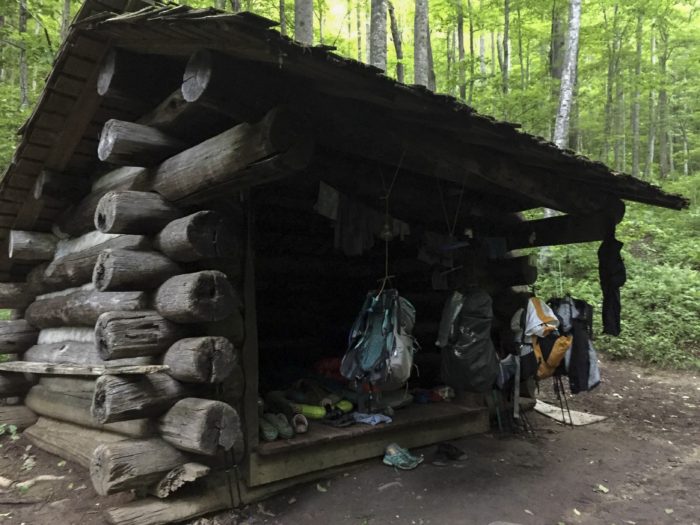 There are four of us in the shelter tonight, which is just comfortable. Any more would feel crowded, especially given how much space I’ve had in them (spoiled) until now. It’s very nice not to have to set the tent up and tear it down because of all the rain. As an added bonus tonight, fireflies joined us at camp right as the last light was fading. What a pleasant surprise. I love watching them.

Even though I literally fell today, it was the blossoms, fireflies, and social time that made me fall for the trail and the joy of hiking all over again. What a great way to feel alive in the fullest sense of the word. 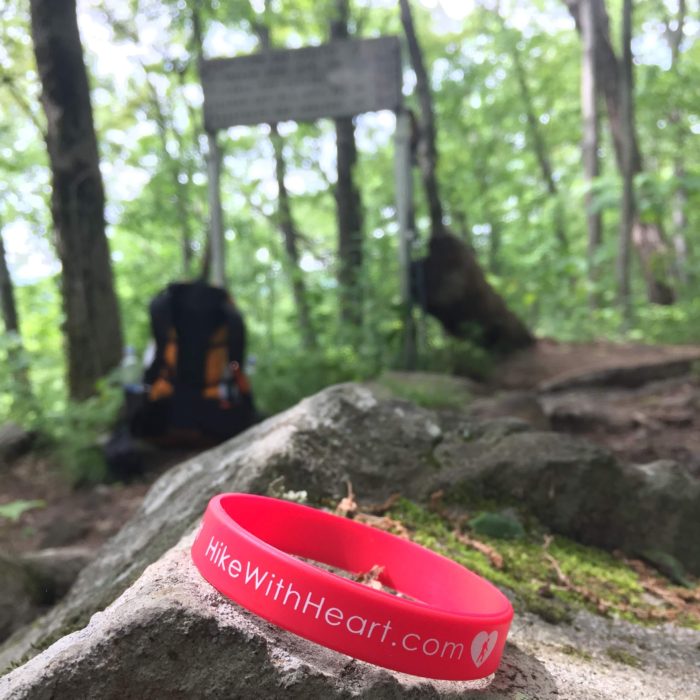